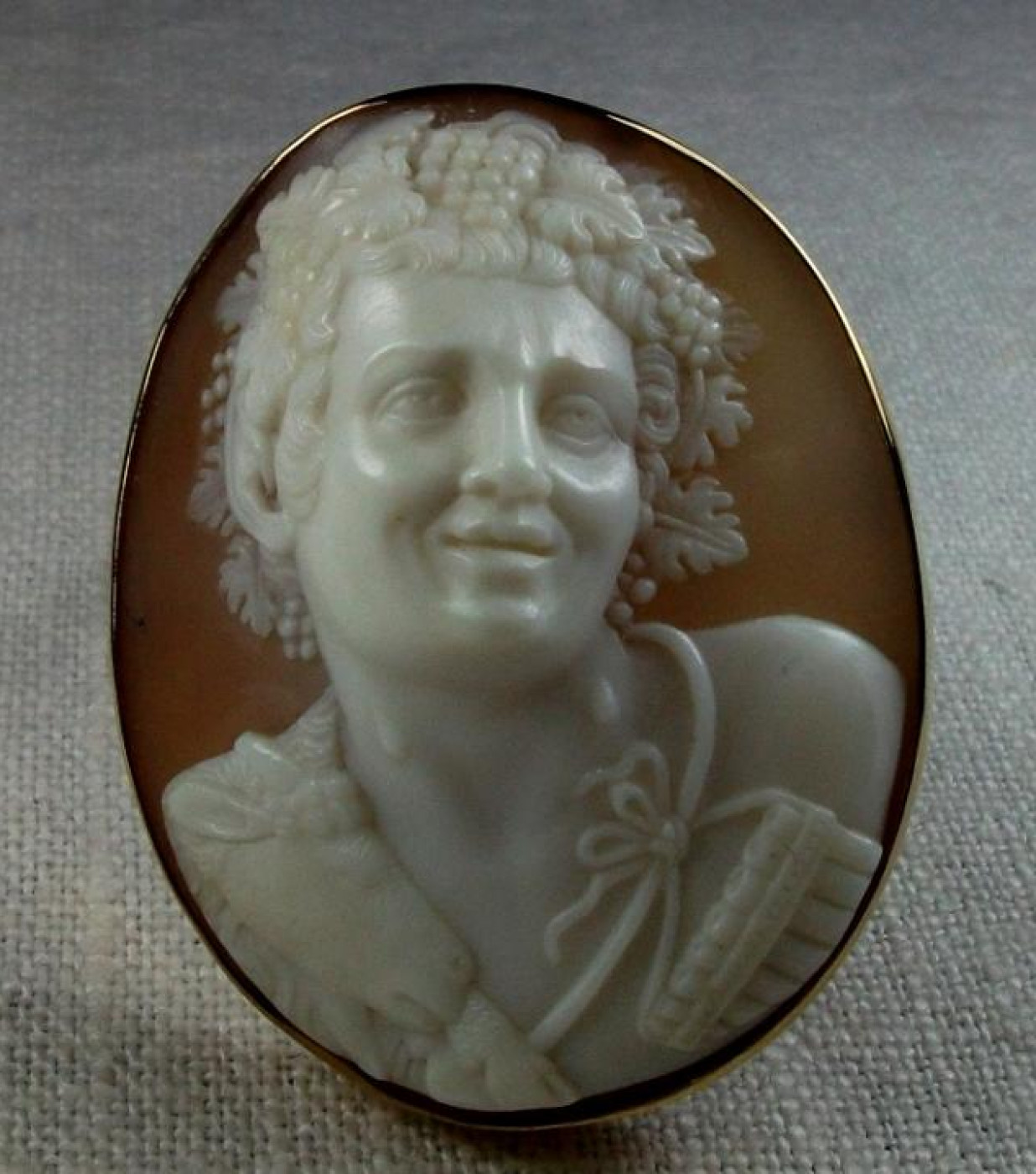 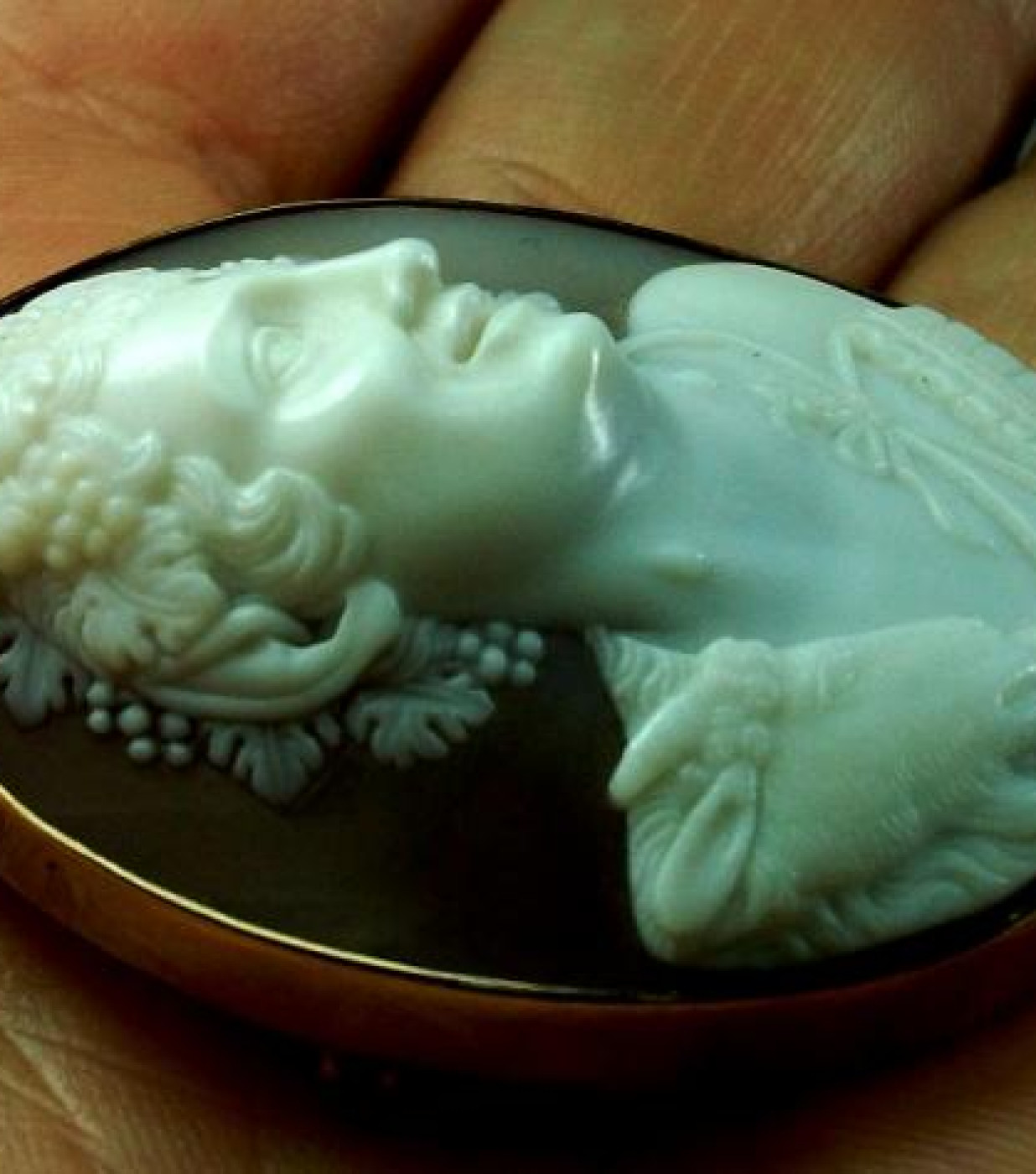 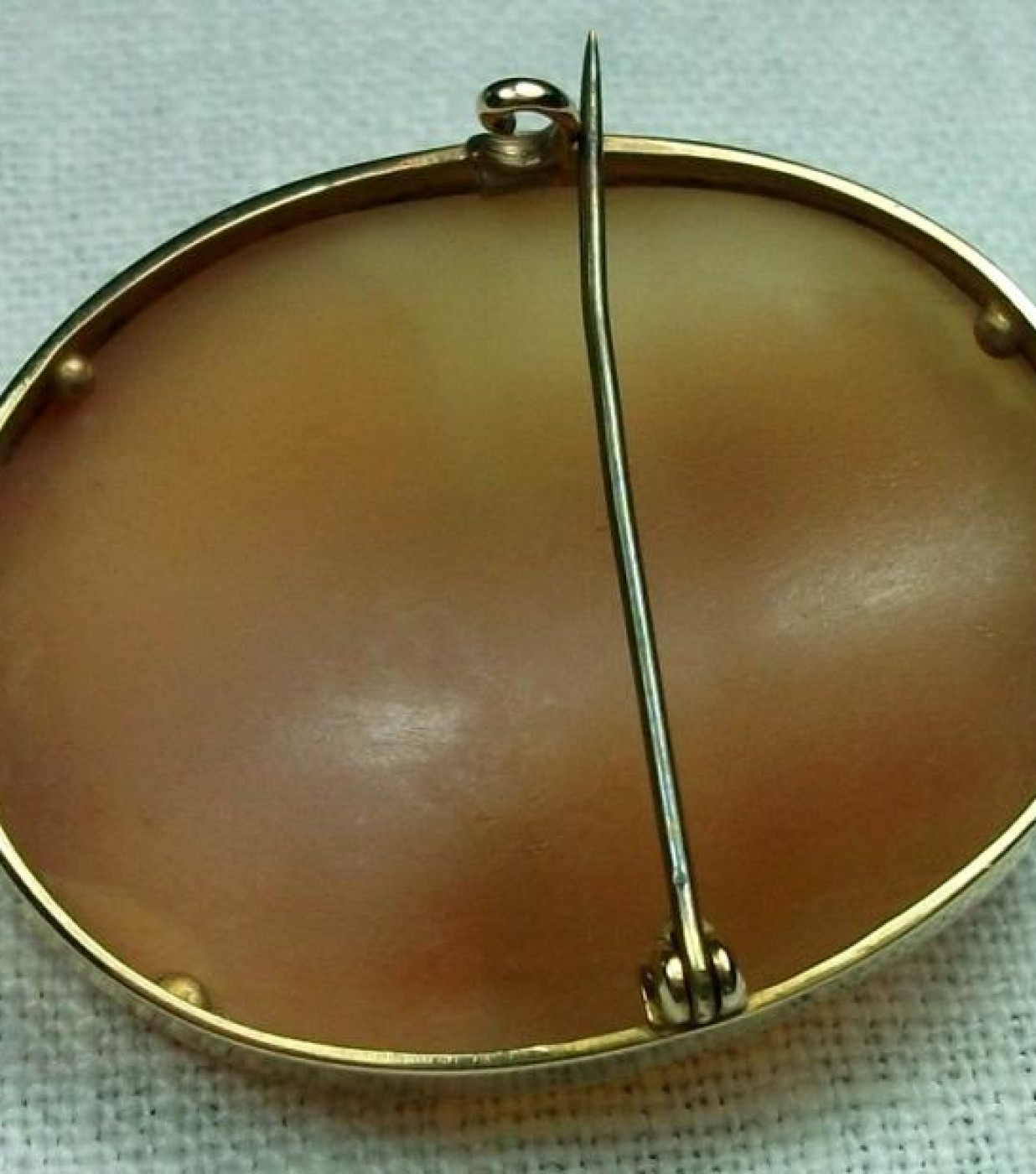 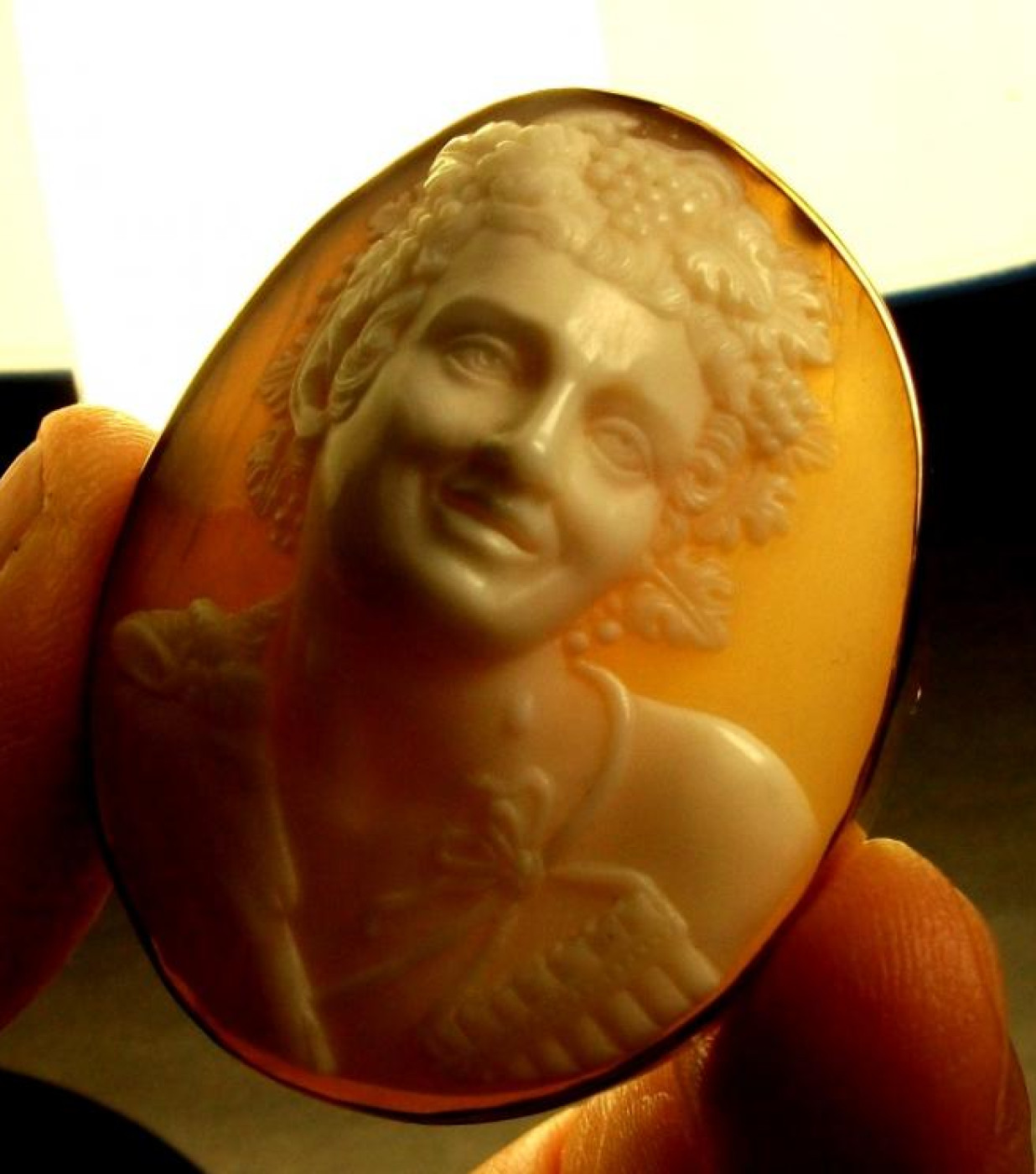 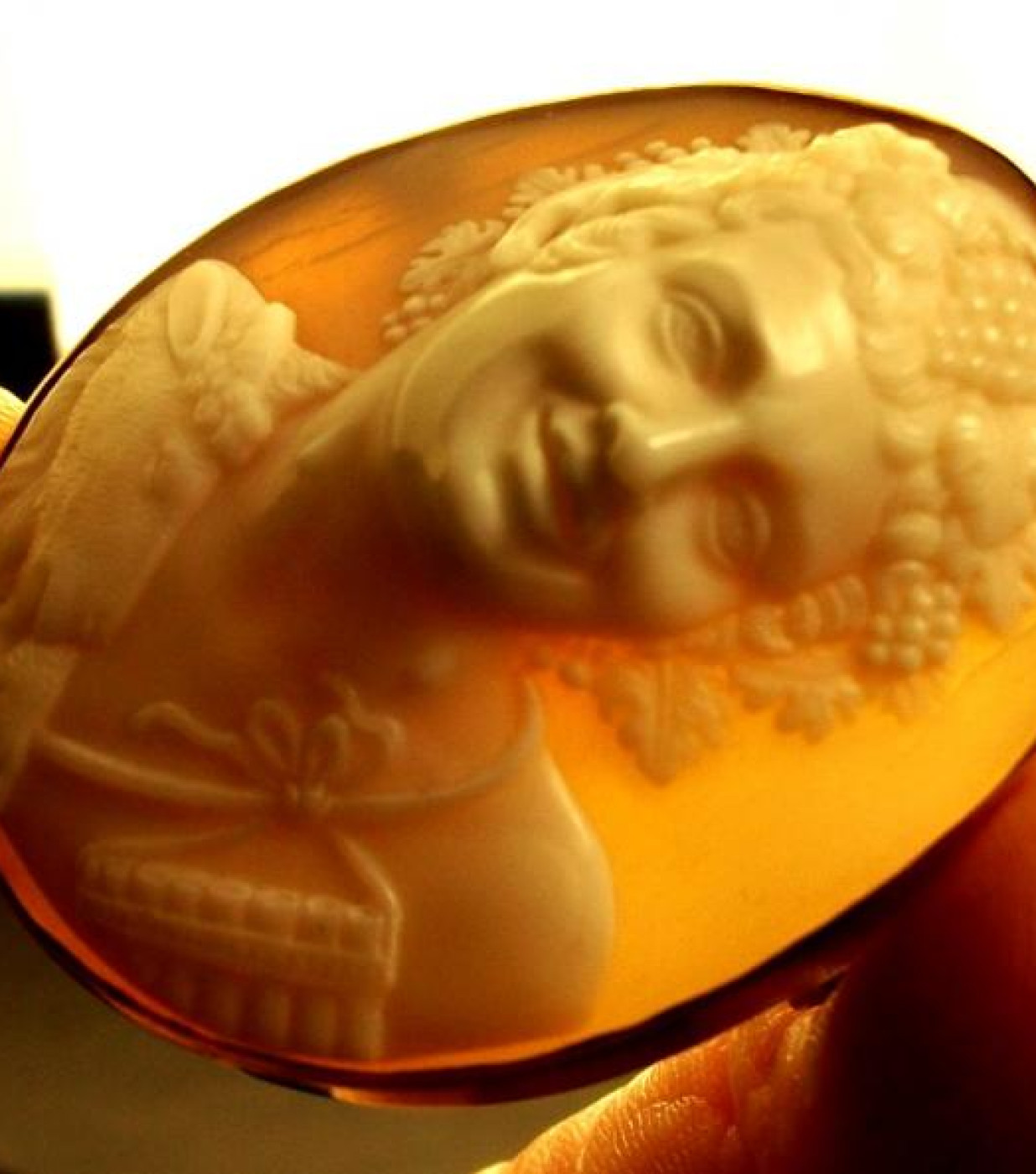 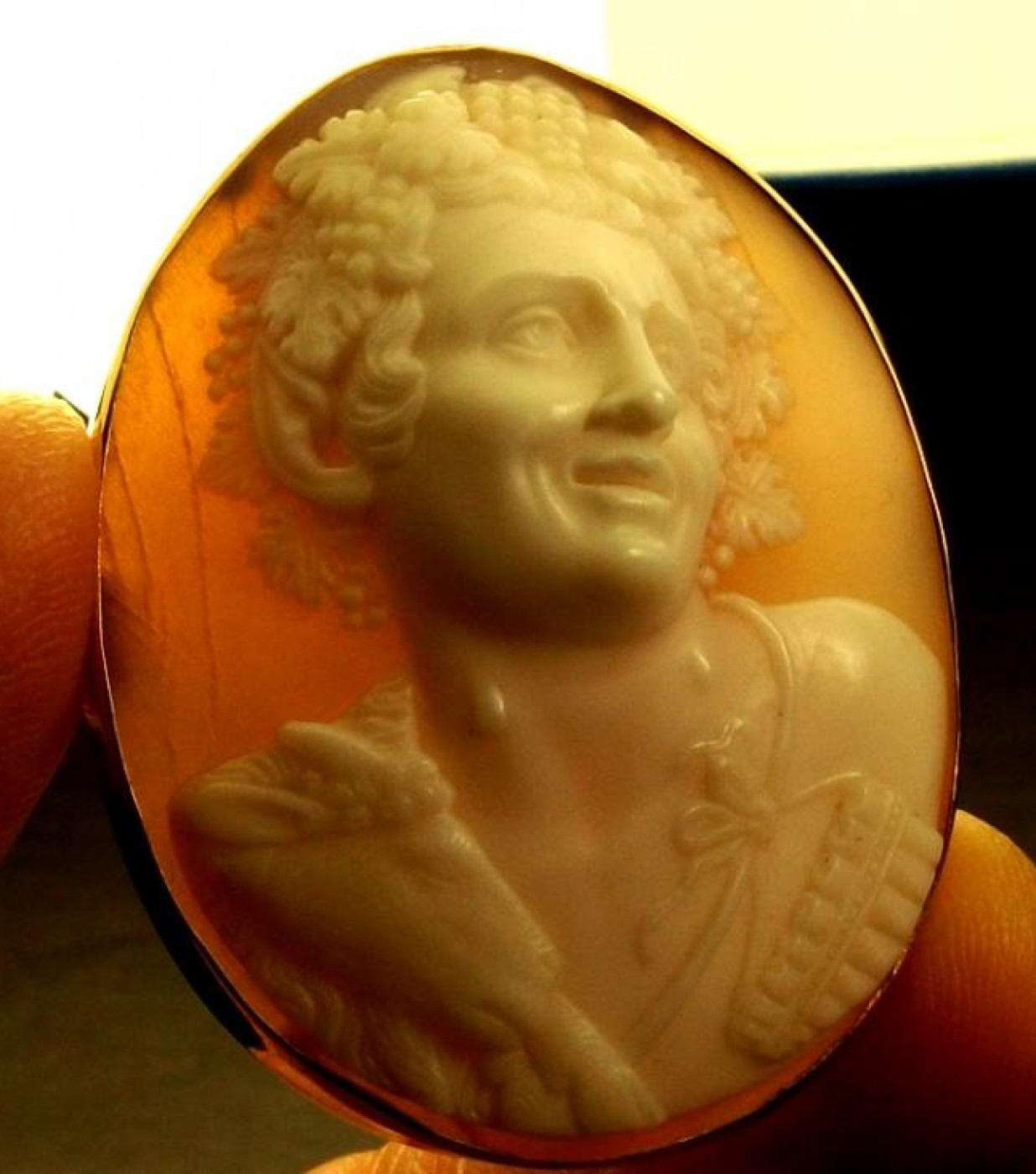 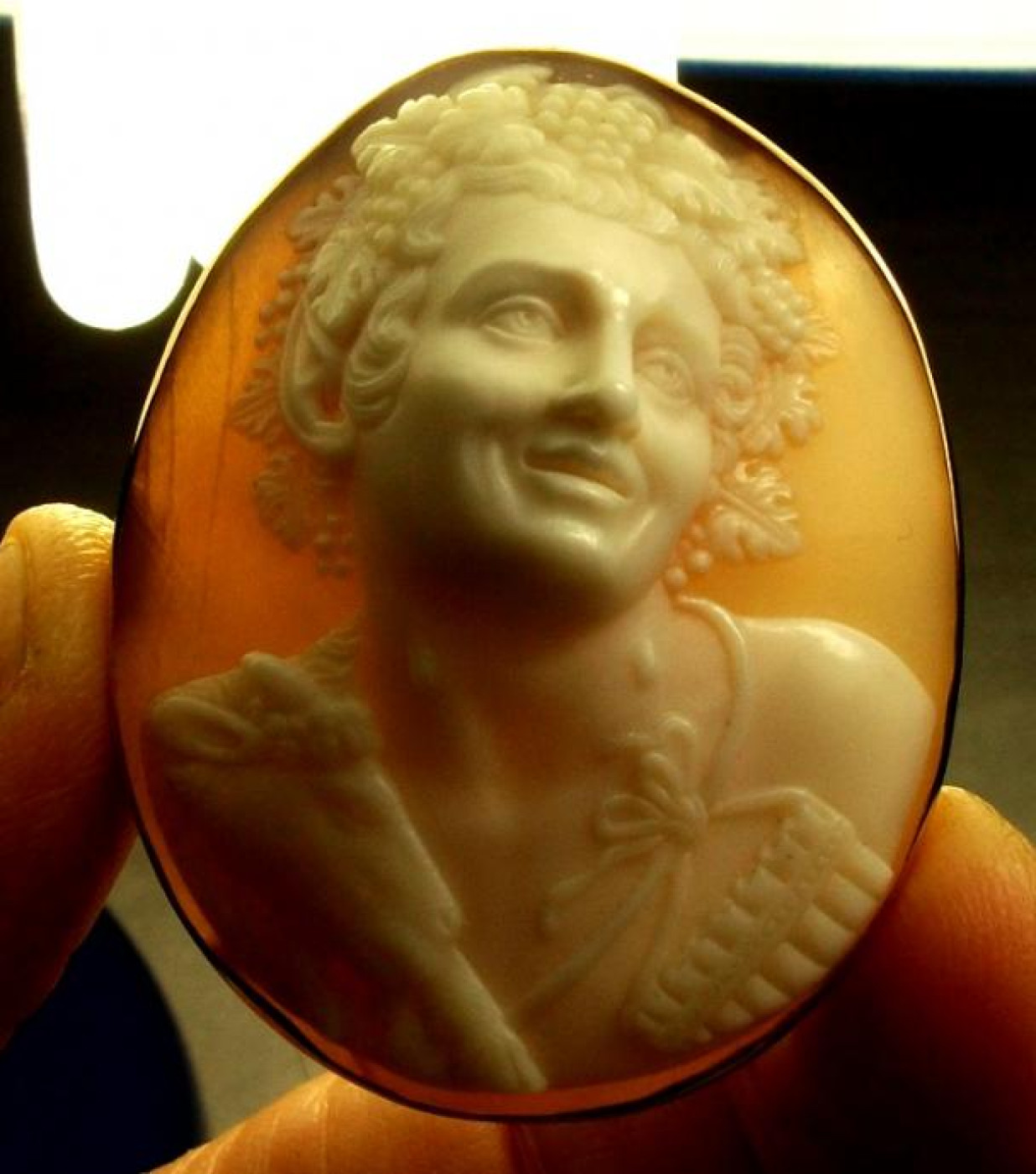 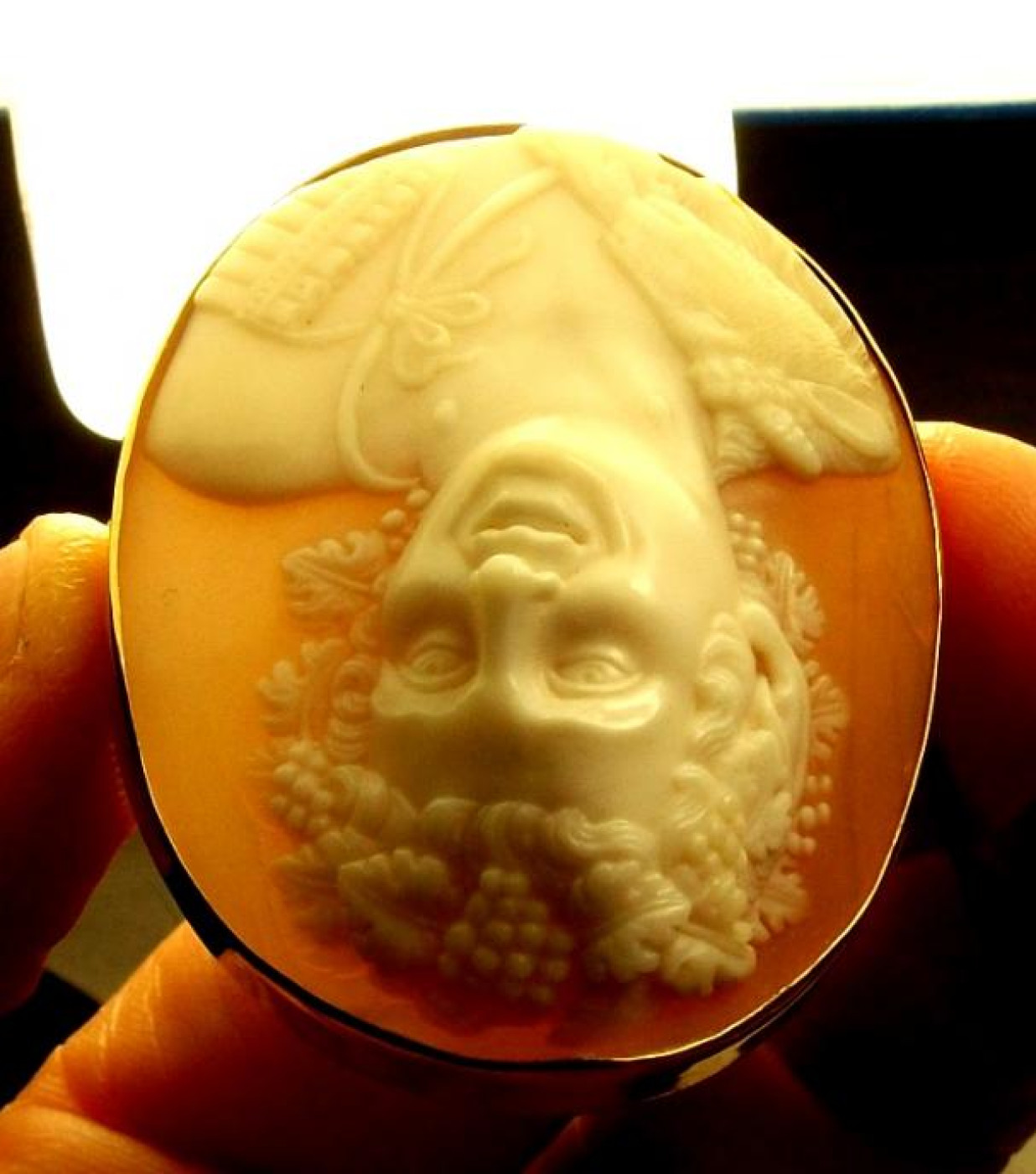 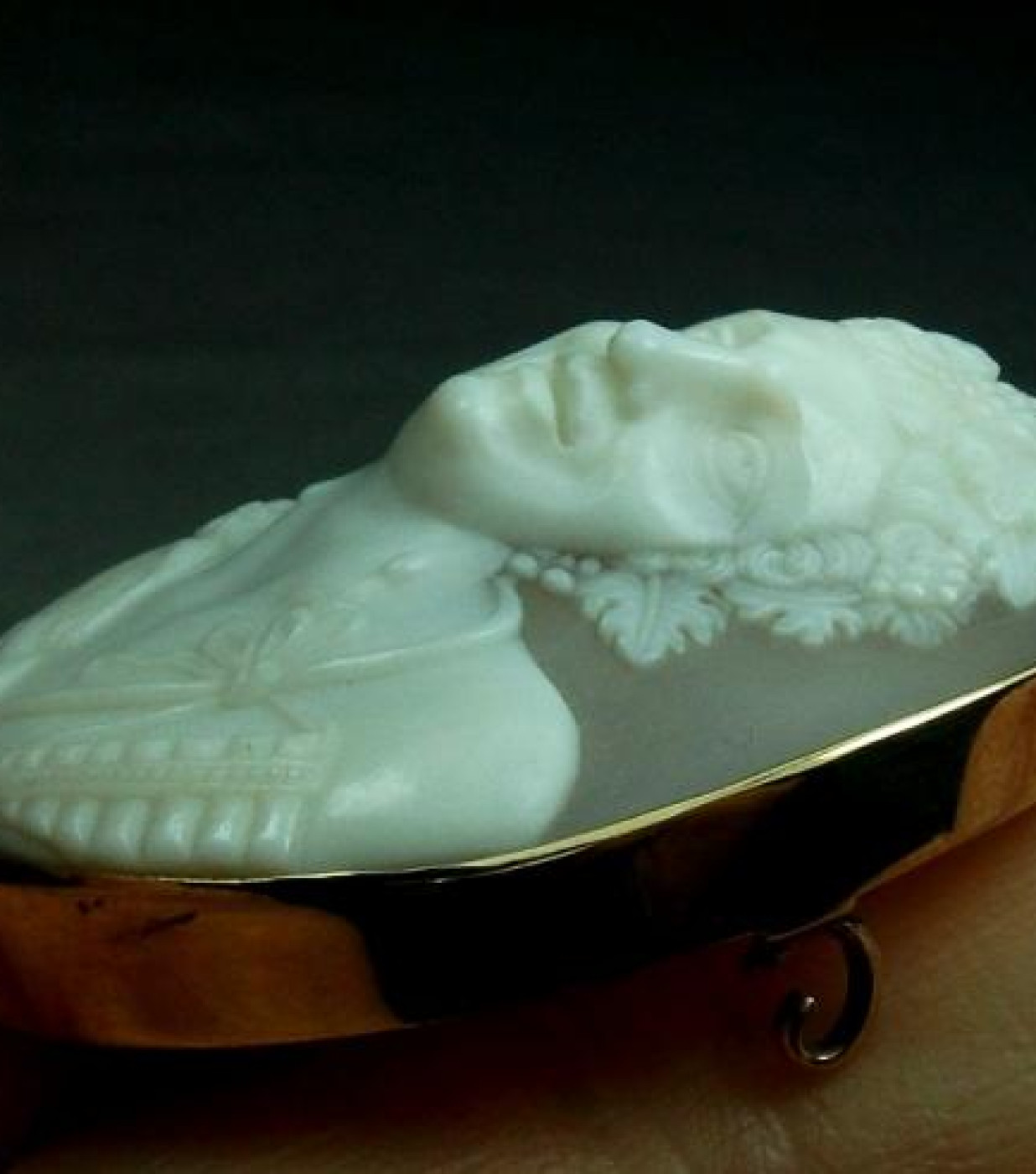 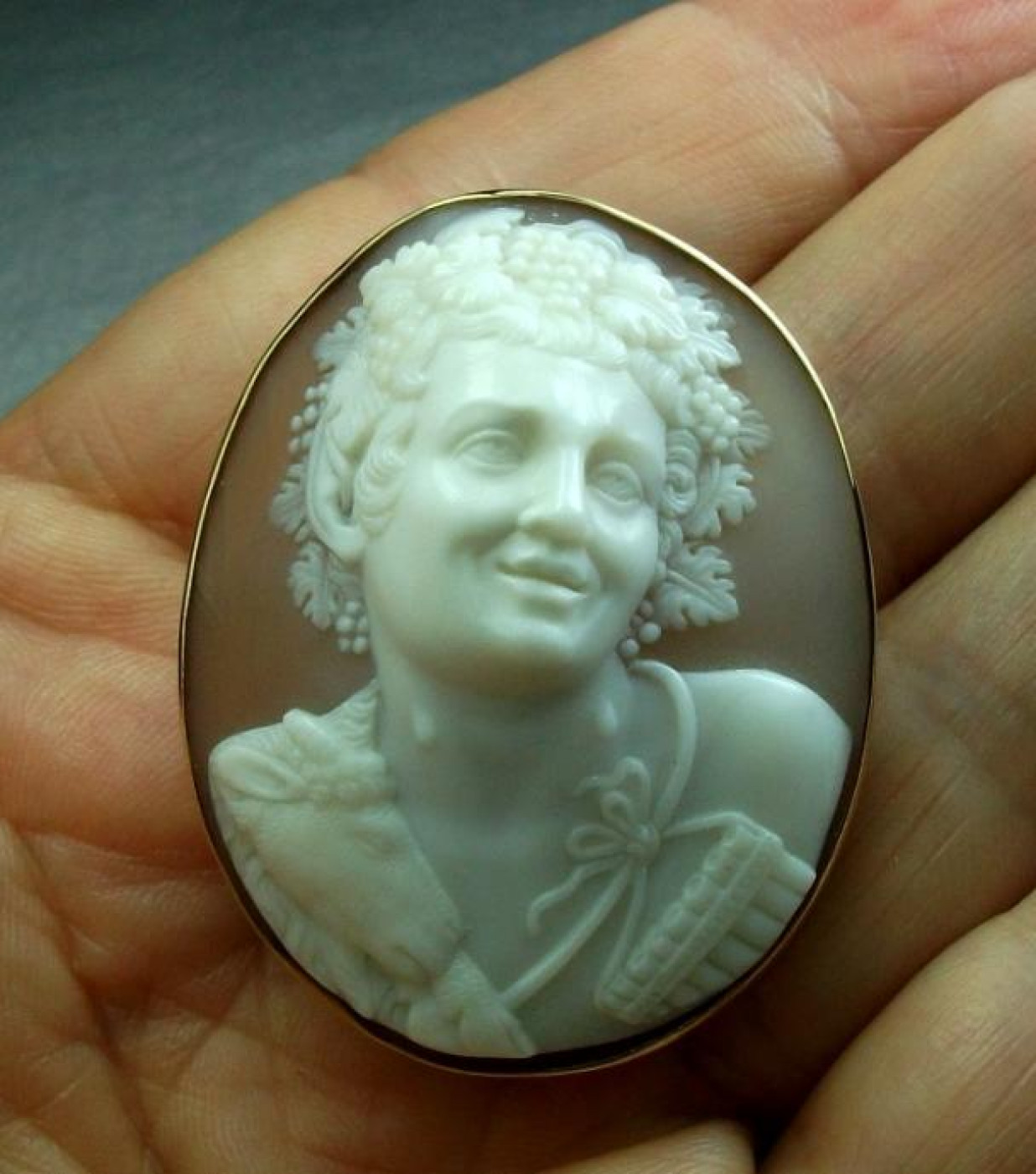 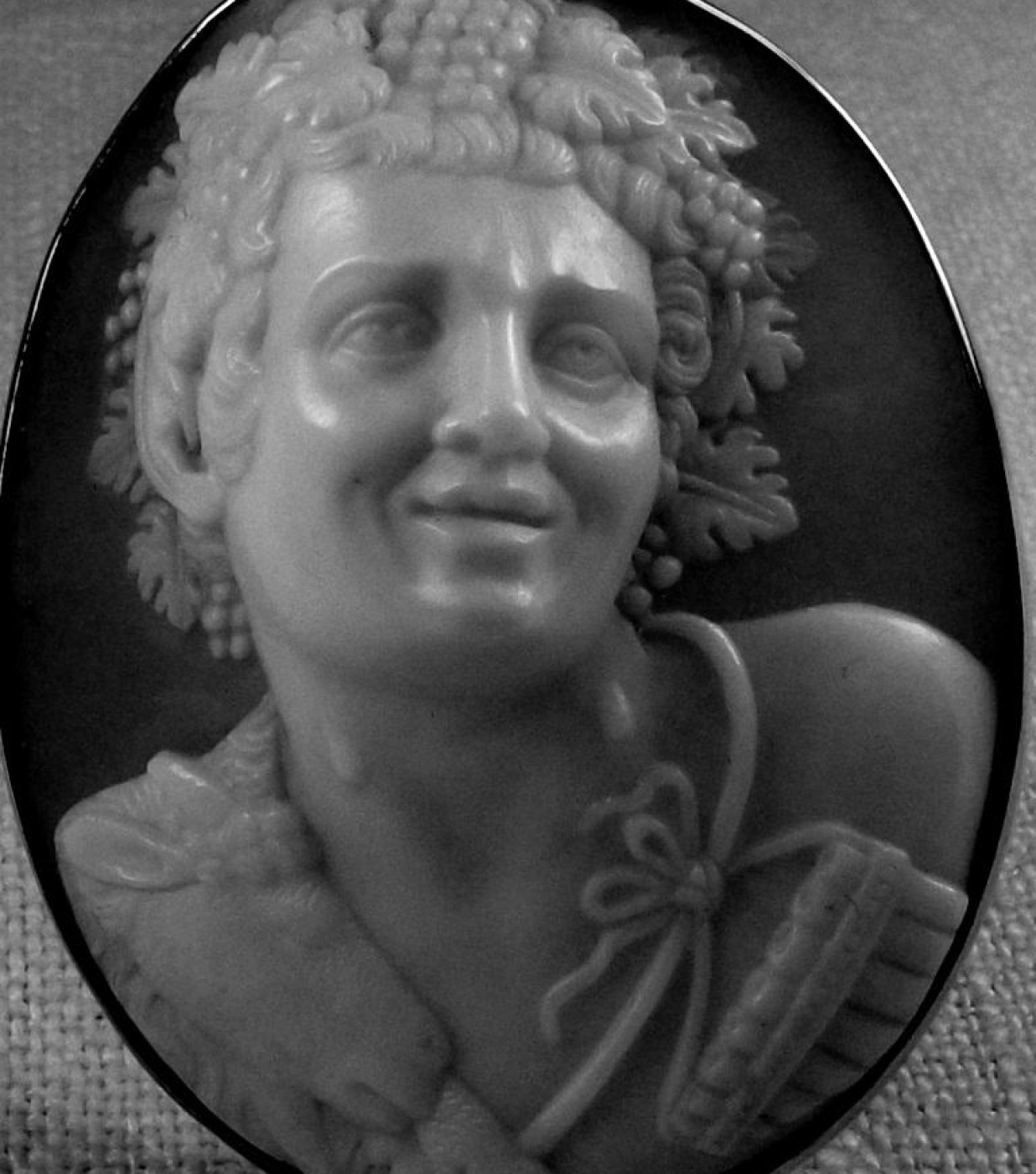 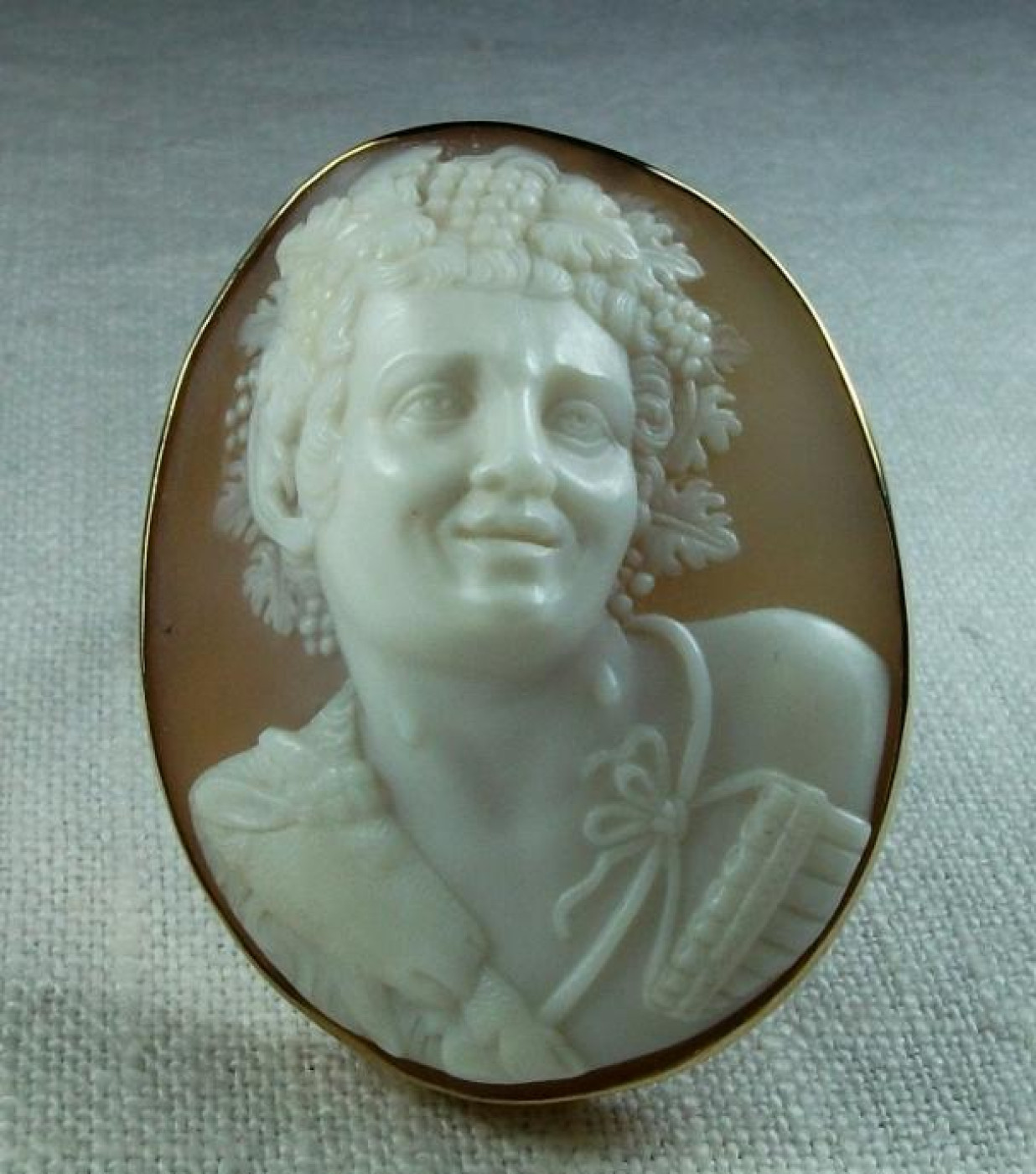 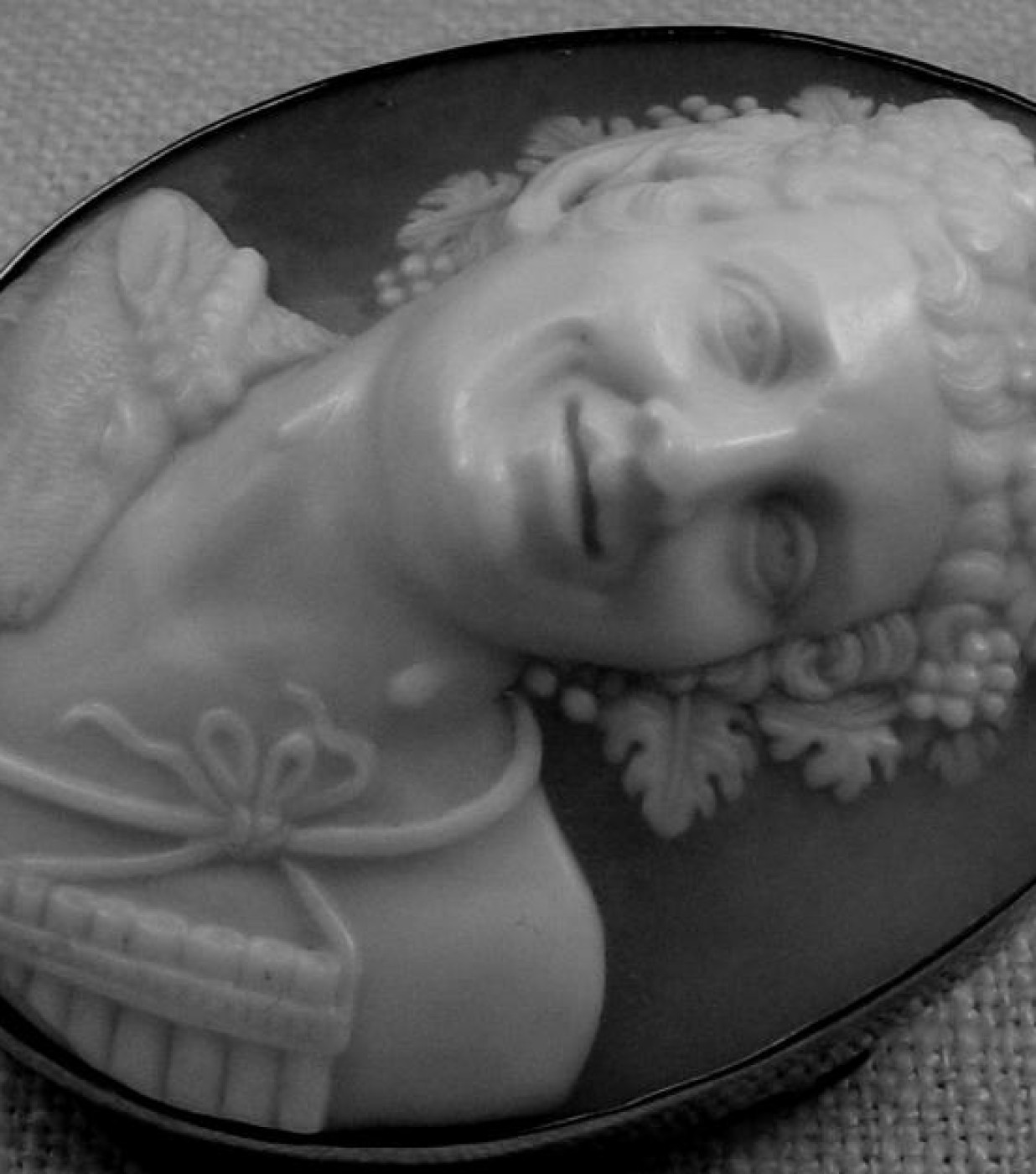 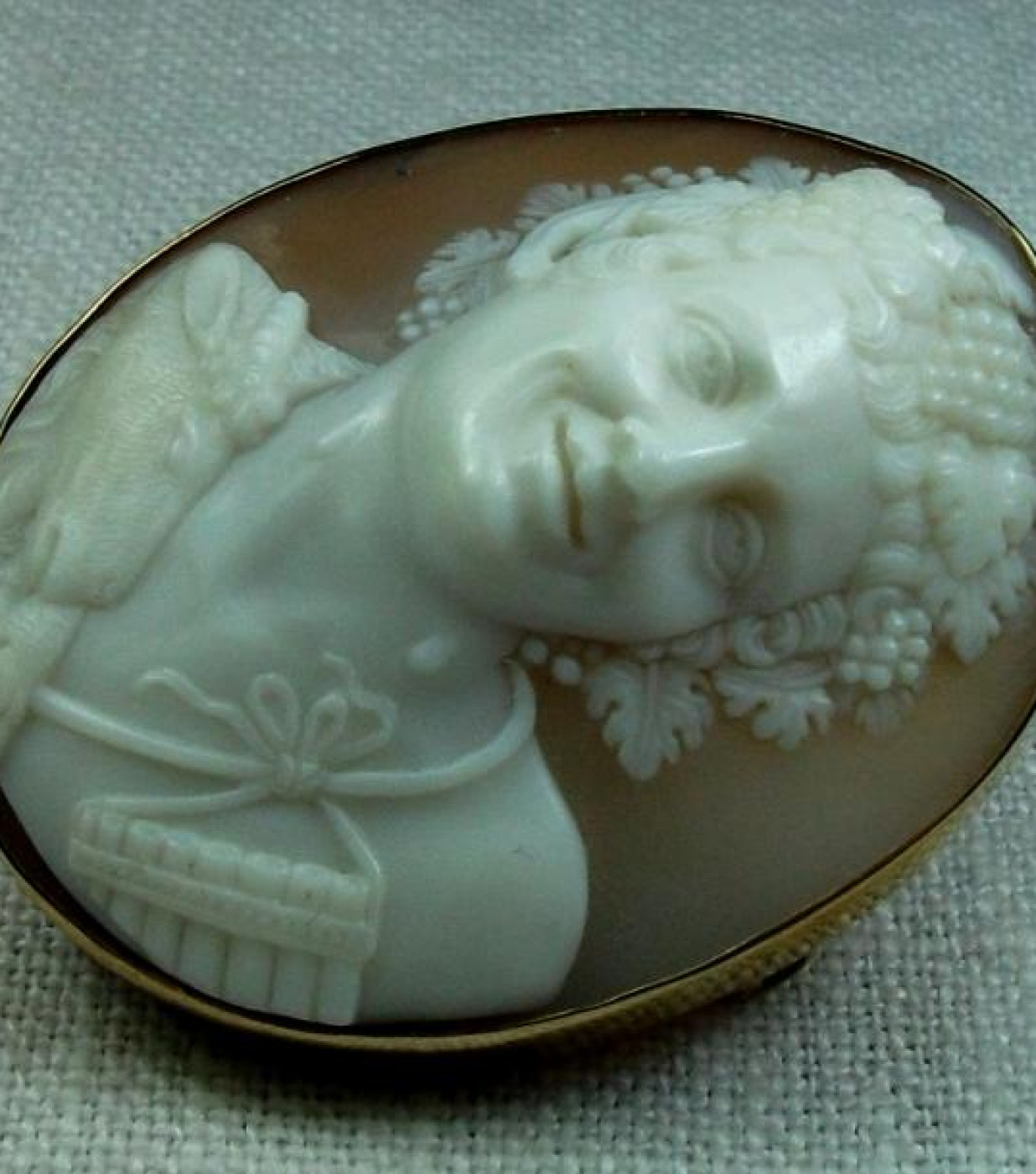 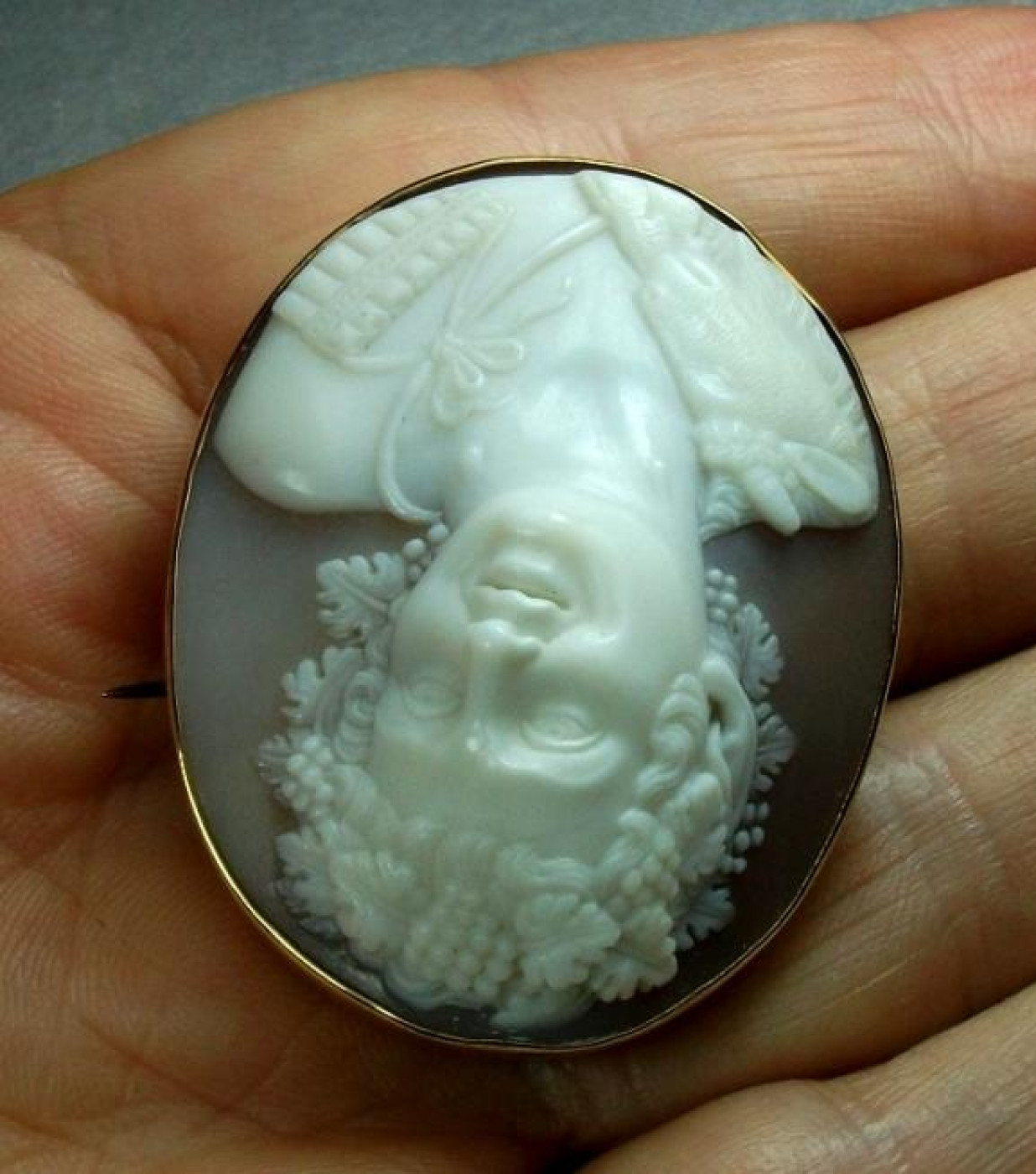 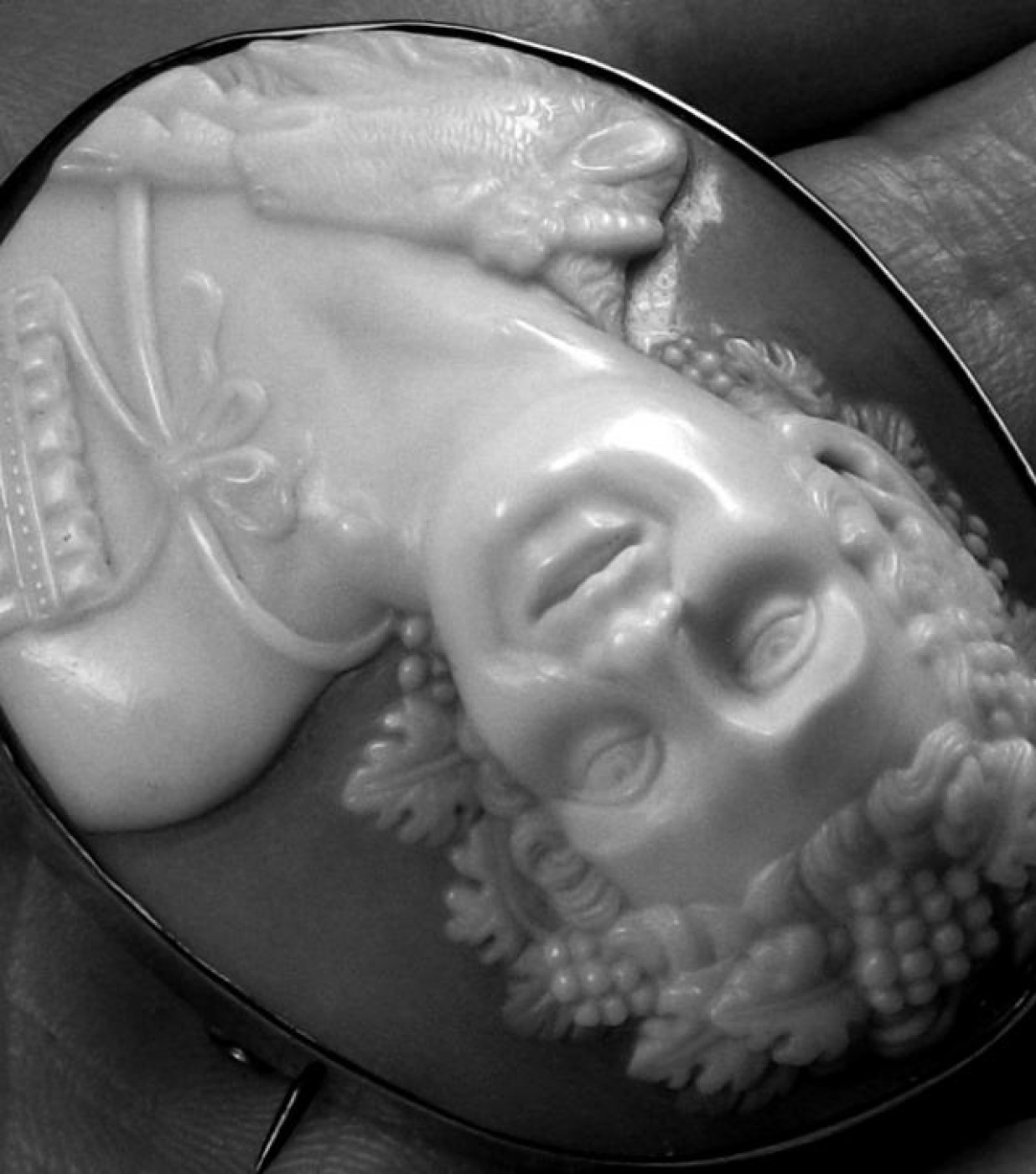 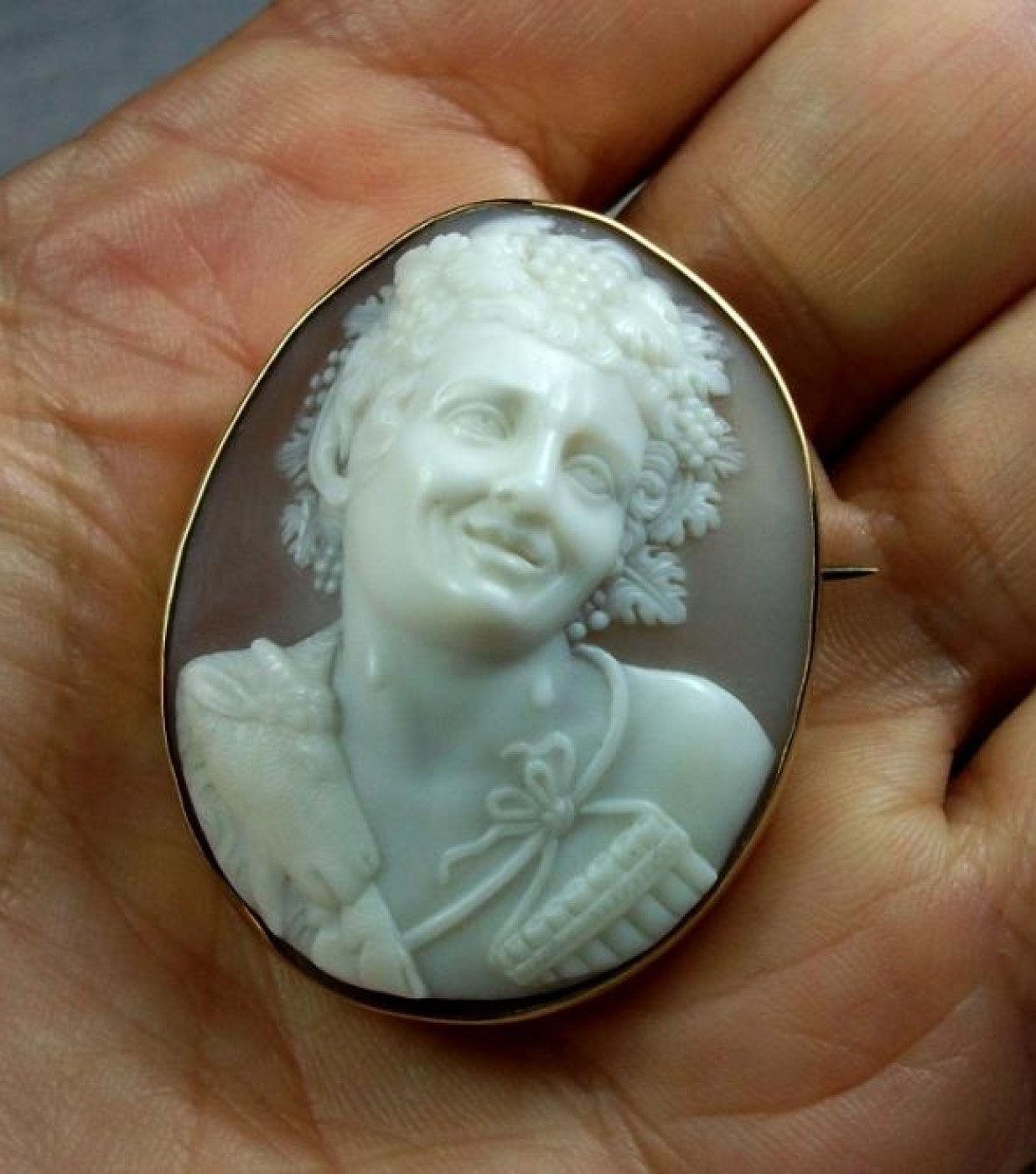 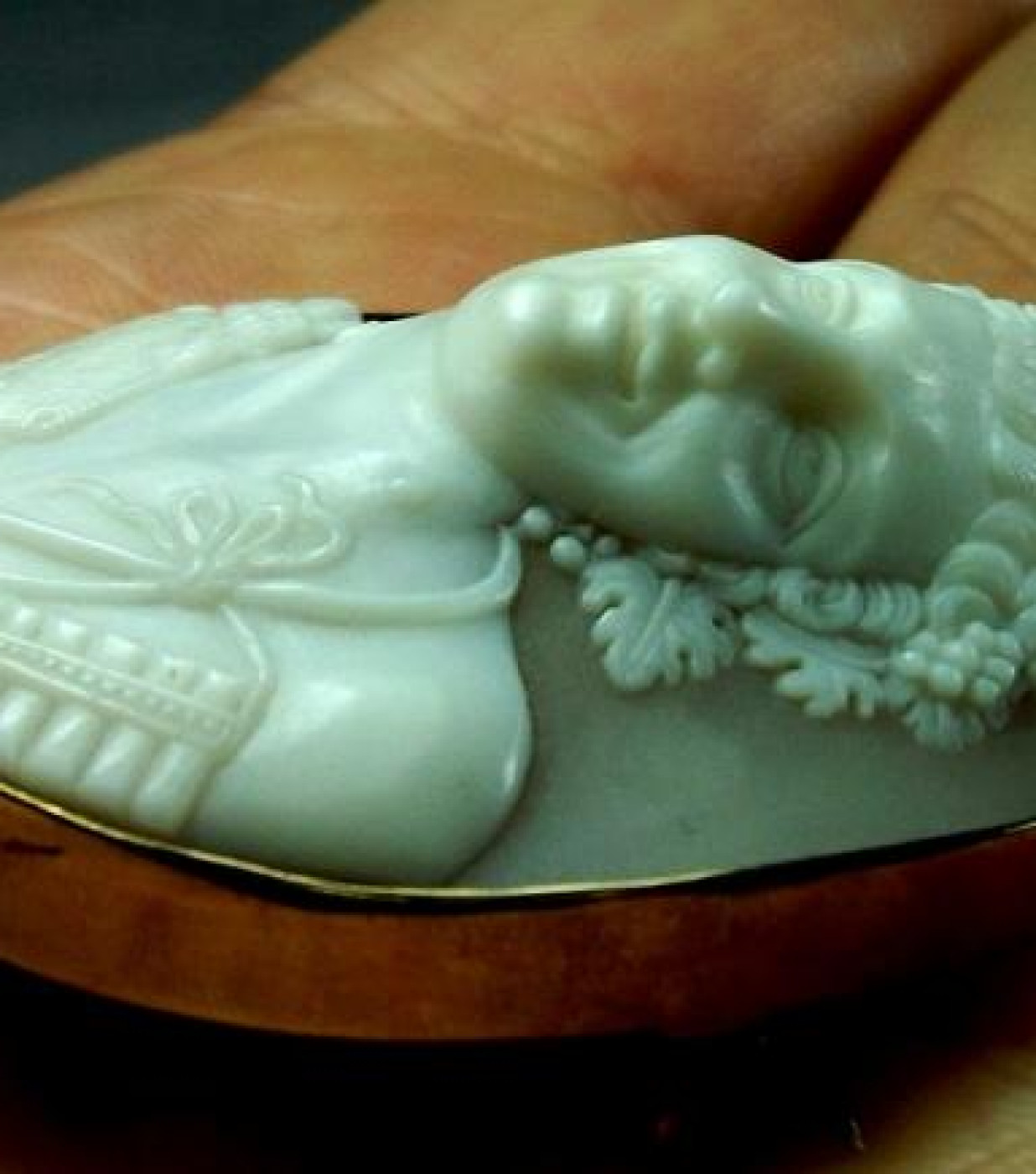 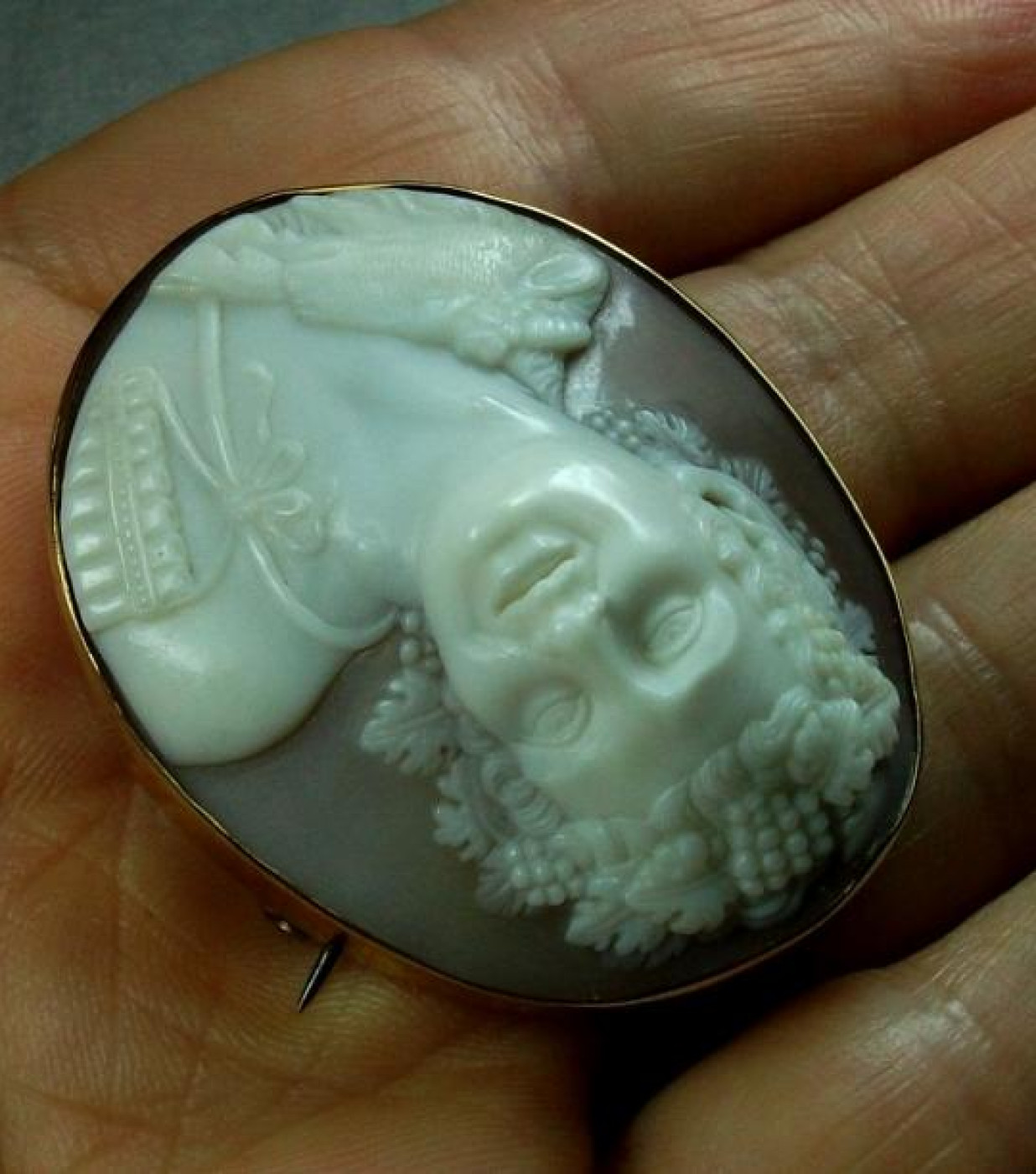 A fantastic, rarest, high relief Museum Quality cameo of the God Pan, a rarest subject to find and especially carved in front face. The sensual Pan, god of shepherds and flocks and companion of Bacchus, was popular as a cameo subject with those who enjoyed social conviviality in the 19th century. On this cameo Pan is depicted wearing an animal pelt and holding pan-pipes. On his neck we can find the goat wattles, one of his attributes being him half man and half goat. Finely detailed carving, a must have for any collector. I'm more than amazed looking at this cameo, it is the real perfection. Look at how his face just seems real, his funny smile, his eyes expression, some wrinkles on his face. This is the third time that I found a so amazing and outstanding cameo depicting the God Pan and I could not be more fortunate as this one is just out of this world. The simple gold frame is just the right complement to the out of this world cameo as it does not detract the attention from the subject.This is a rarest cameo in immaculate condition, surely it has been never worn. The shell is brilliant and polished and the carving is immaculate. Everything in this cameo is perfectly rendered, a so wonderful Pan cameo, an absolute beauty, carved by a true artist.  An outstanding fantastic cameo to not to be missed.


Pan, in Greek religion and mythology, is the god of the wild, shepherds and flocks, nature, of mountain wilds, hunting and rustic music, as well as the companion of the nymphs. His name originates within the Ancient Greek language, from the word paein meaning "to pasture". He has the hindquarters, legs, and horns of a goat, in the same manner as a faun or satyr. With his homeland in rustic Arcadia, he is recognized as the god of fields, groves, and wooded glens; because of this, Pan is connected to fertility and the season of spring. The ancient Greeks also considered Pan to be the god of theatrical criticism.
In Roman religion and myth, Pan's counterpart was Faunus, a nature god who was the father of Bona Dea, sometimes identified as Fauna. In the 18th and 19th centuries, Pan became a significant figure in the Romantic movement of western Europe, and also in the 20th-century Neopagan movement.
One of the famous myths of Pan involves the origin of his pan flute, fashioned from lengths of hollow reed. Syrinx was a lovely water-nymph of Arcadia, daughter of Landon, the river-god. As she was returning from the hunt one day, Pan met her. To escape from his importunities, the fair nymph ran away and didn't stop to hear his compliments. He pursued from Mount Lycaeum until she came to her sisters who immediately changed her into a reed. When the air blew through the reeds, it produced a plaintive melody. The god, still infatuated, took some of the reeds, because he could not identify which reed she became, and cut seven pieces (or according to some versions, nine), joined them side by side in gradually decreasing lengths, and formed the musical instrument bearing the name of his beloved Syrinx. Henceforth Pan was seldom seen without it.