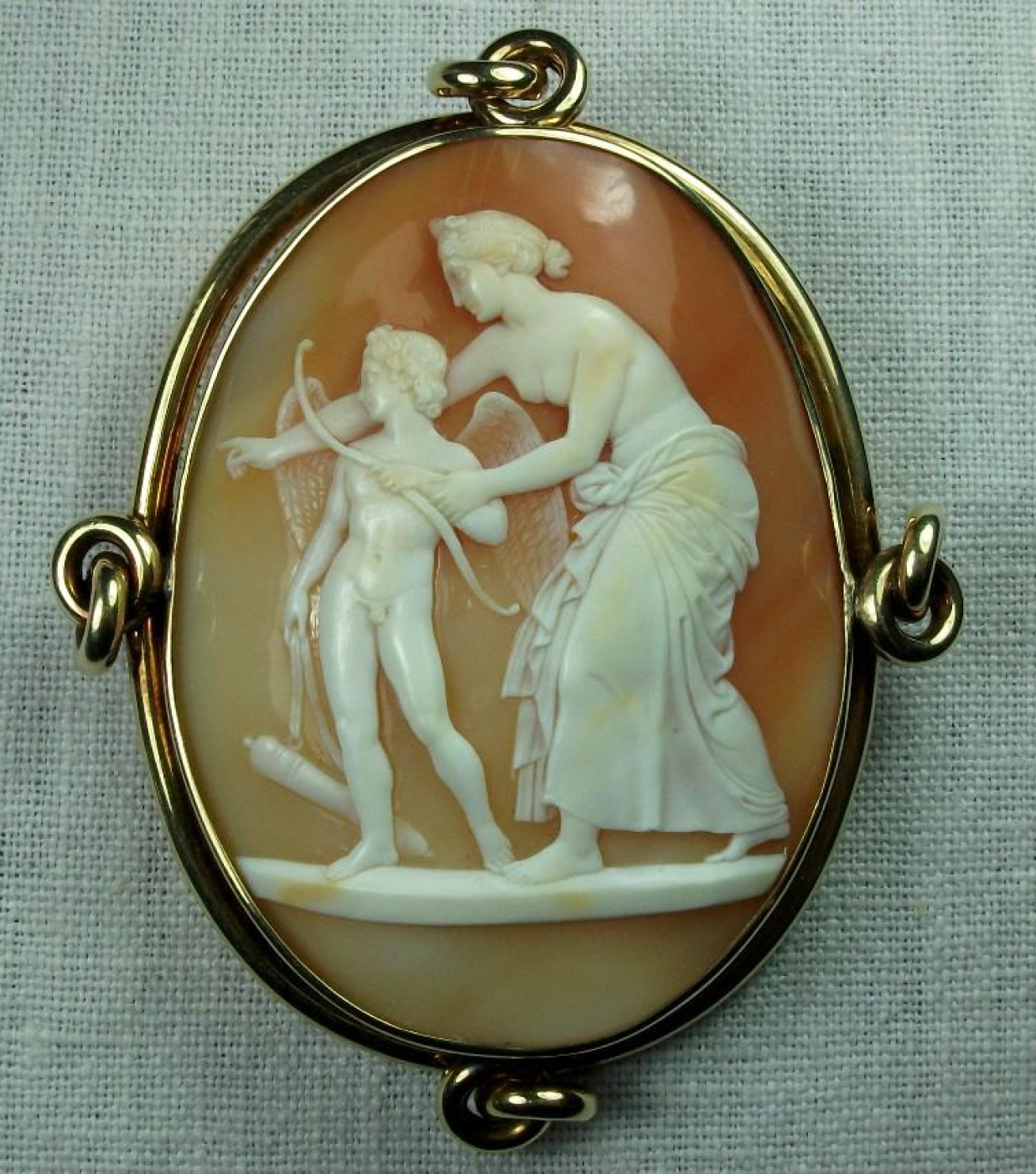 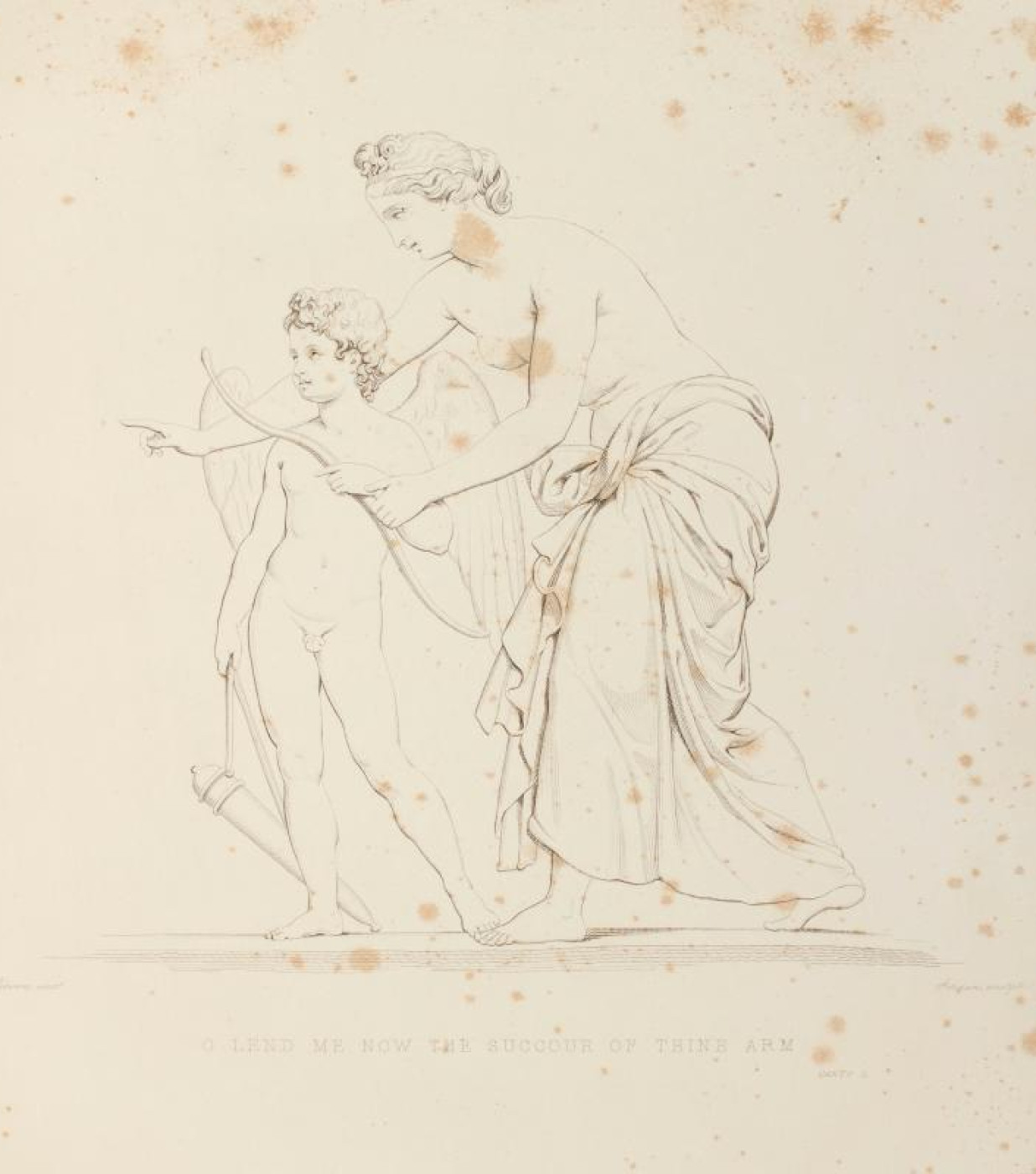 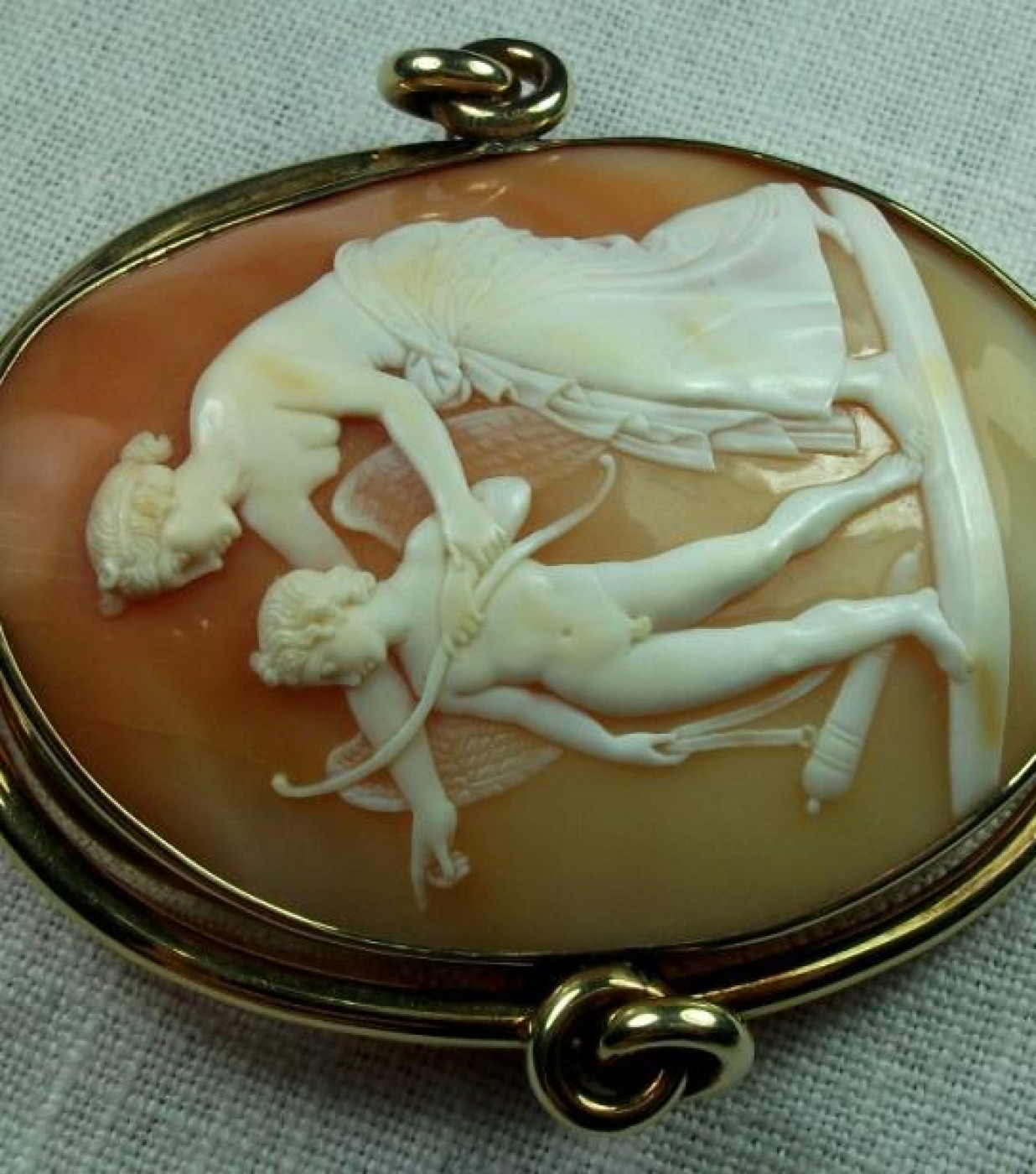 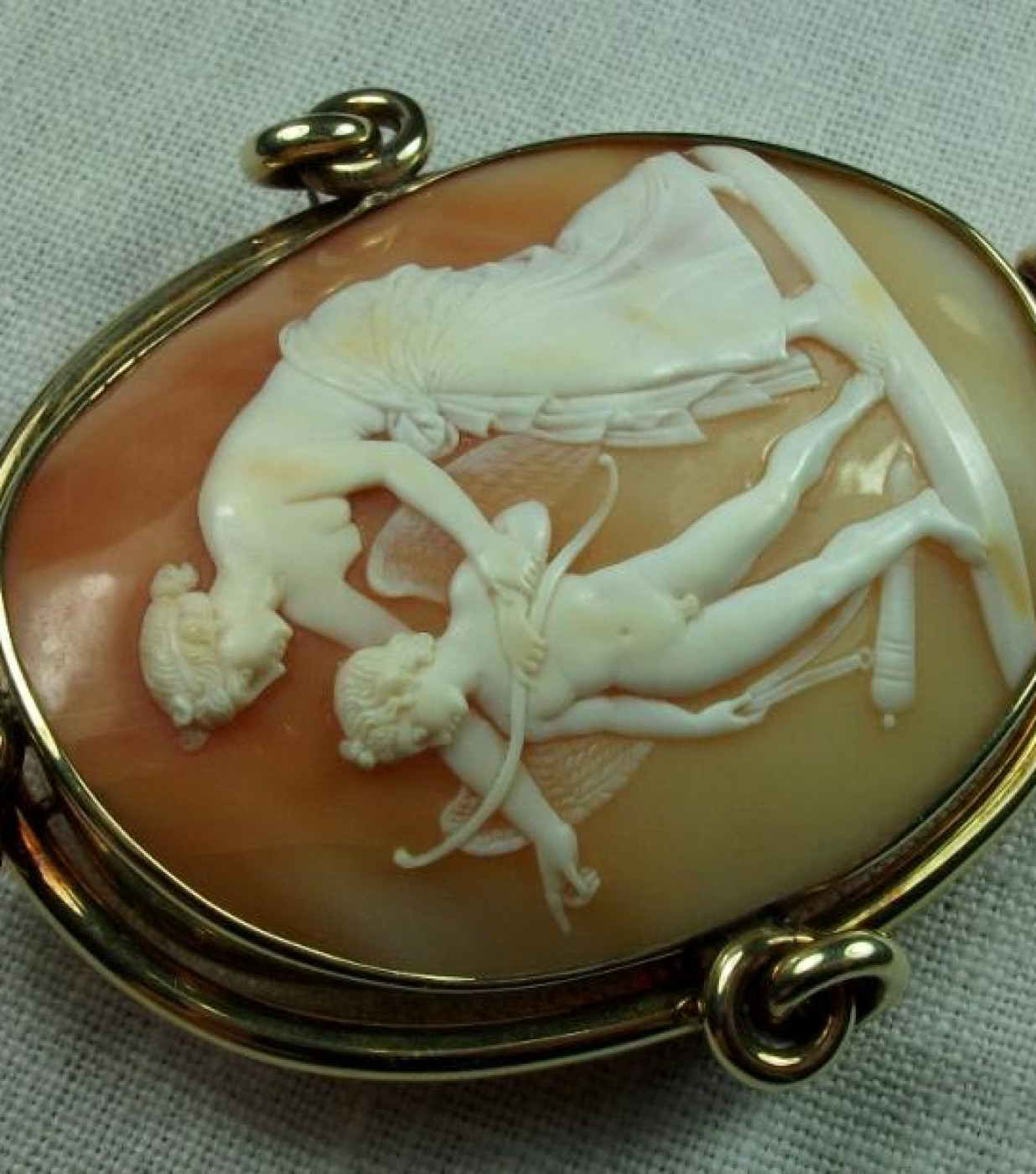 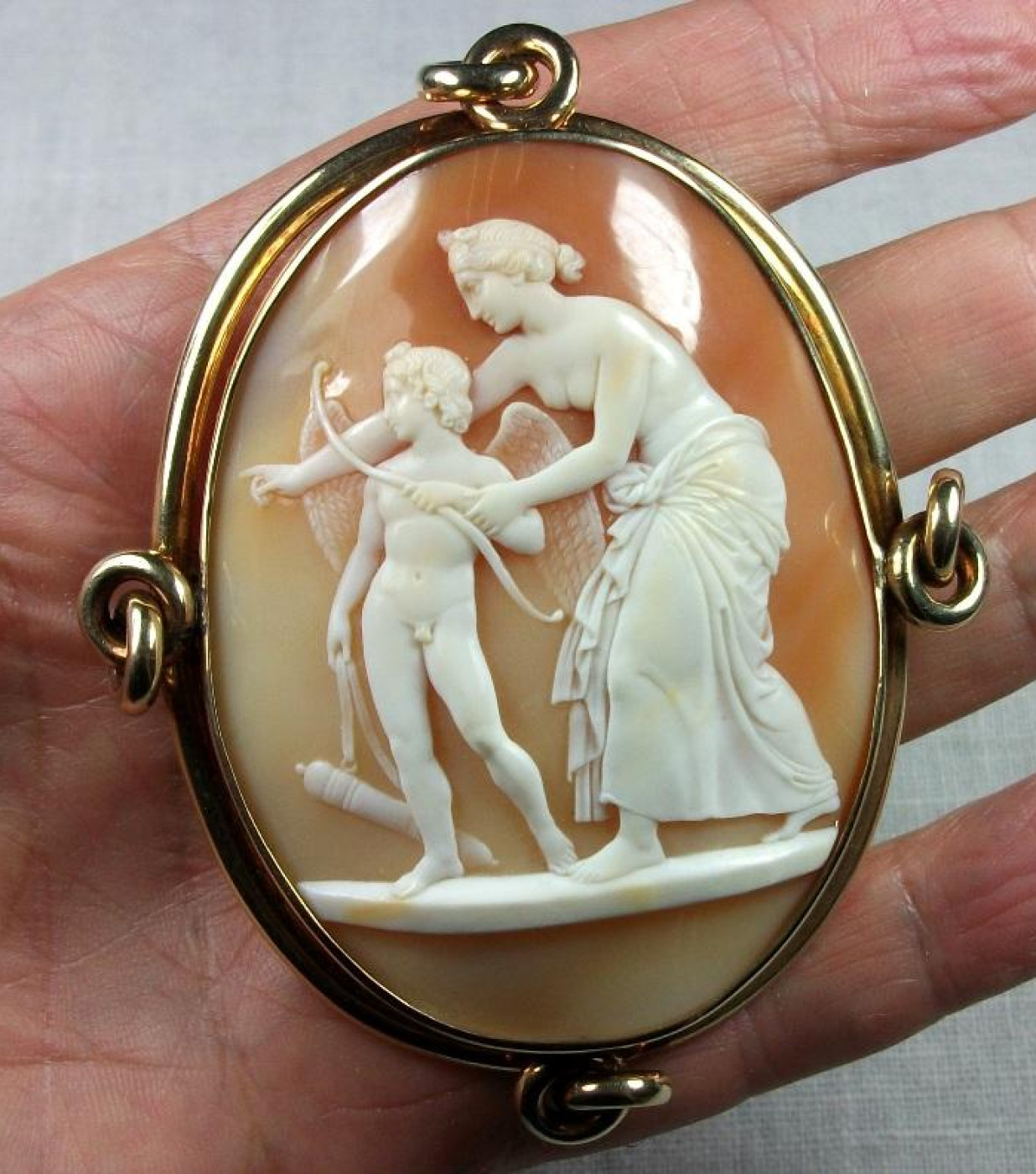 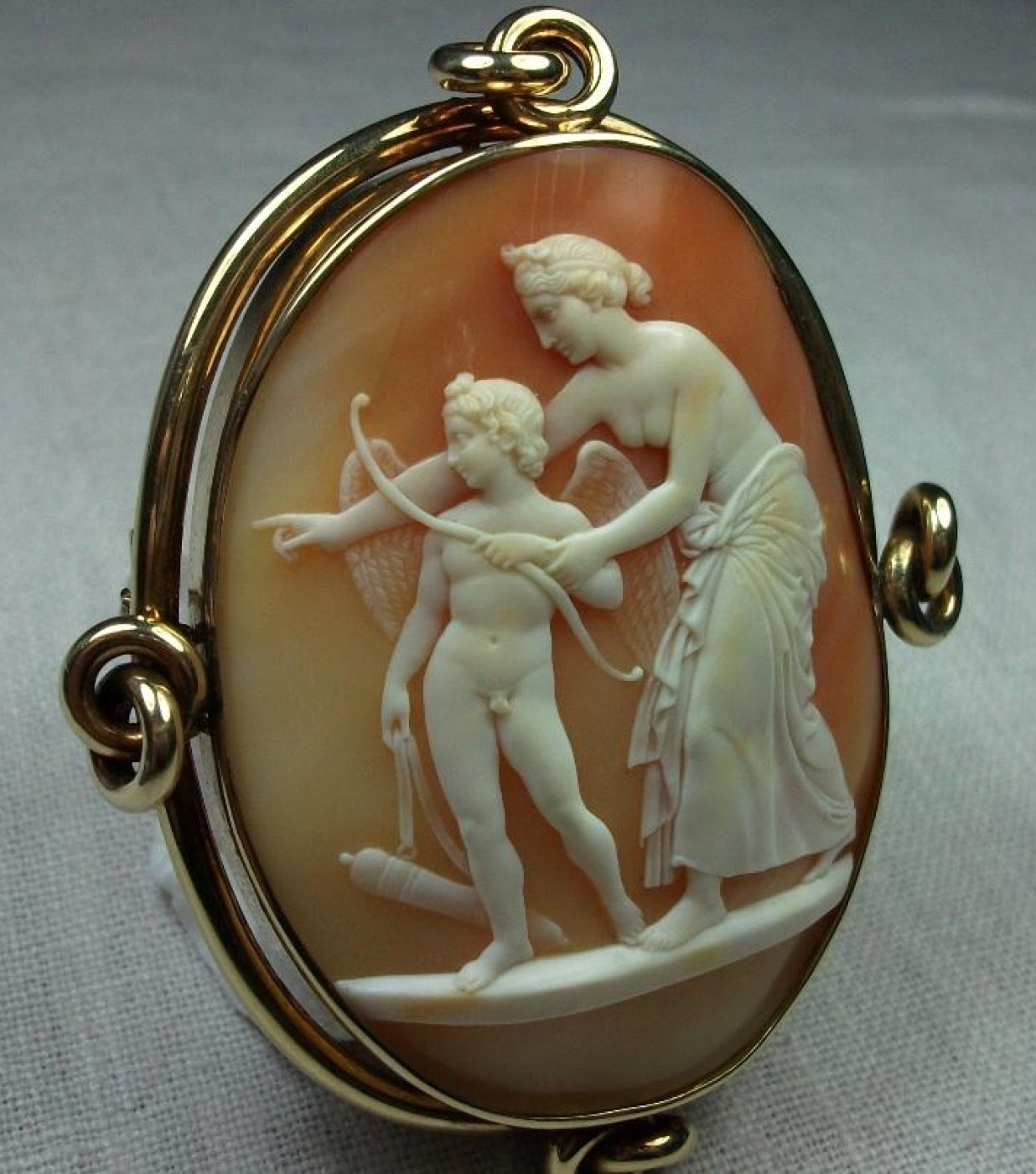 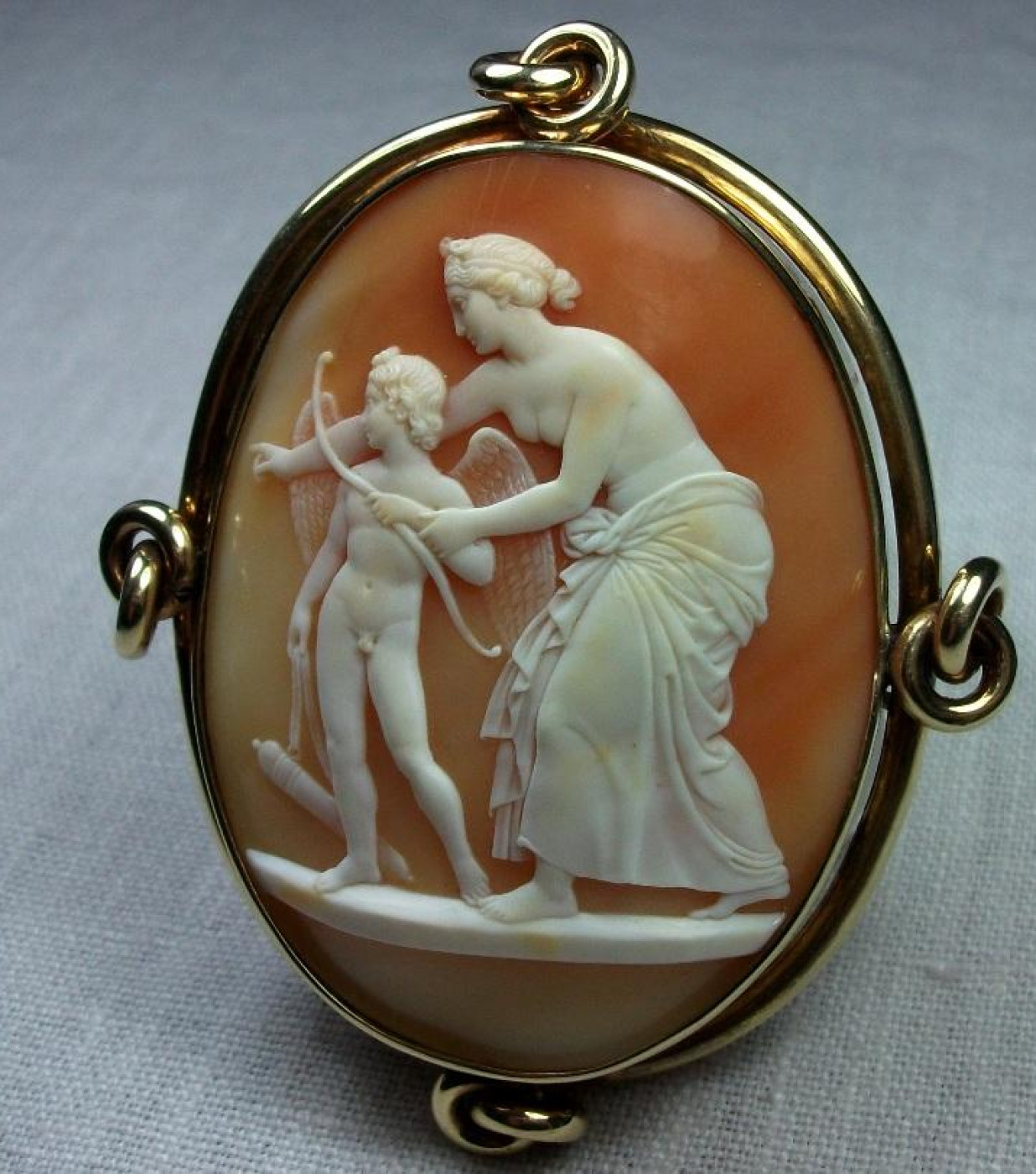 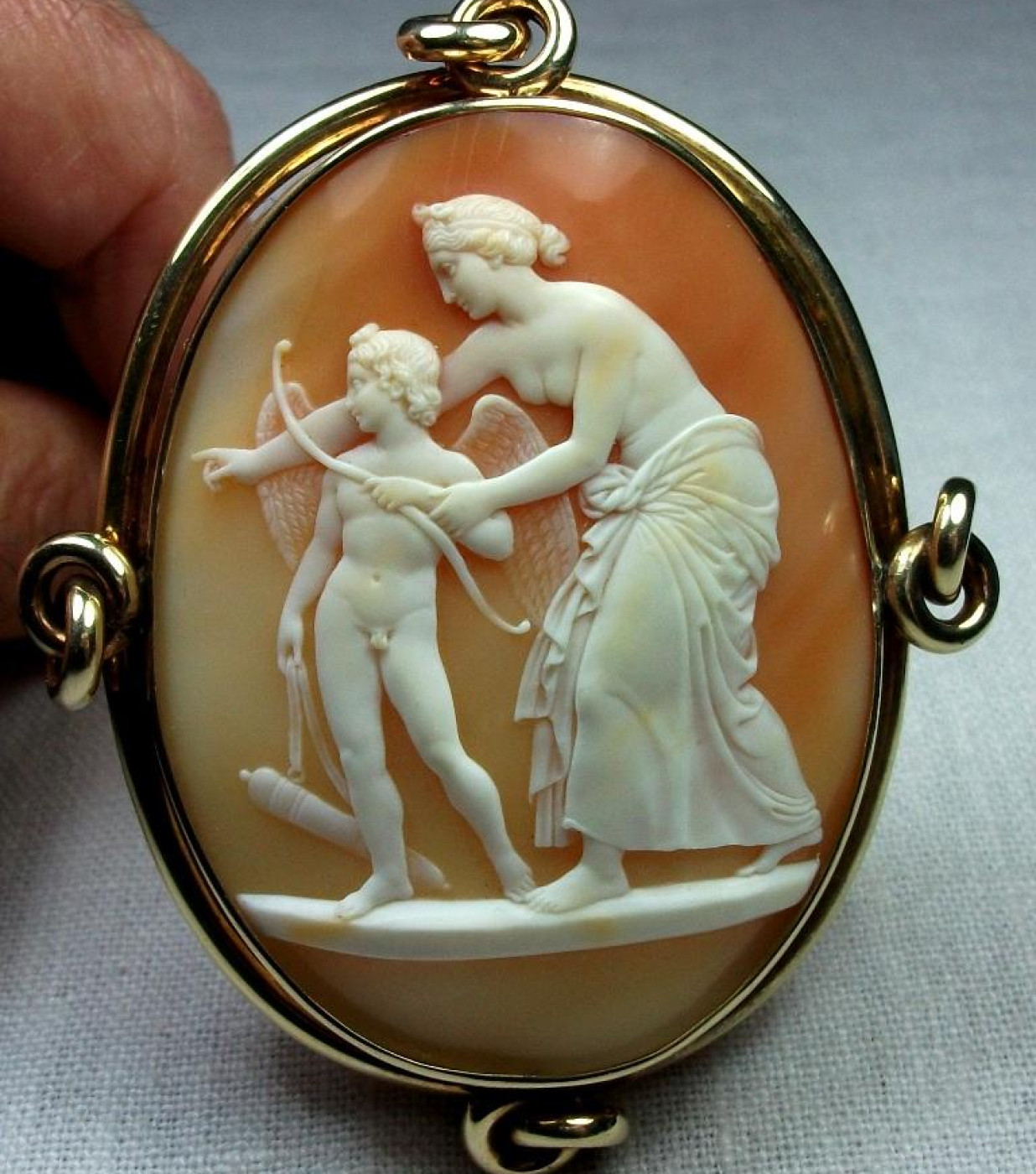 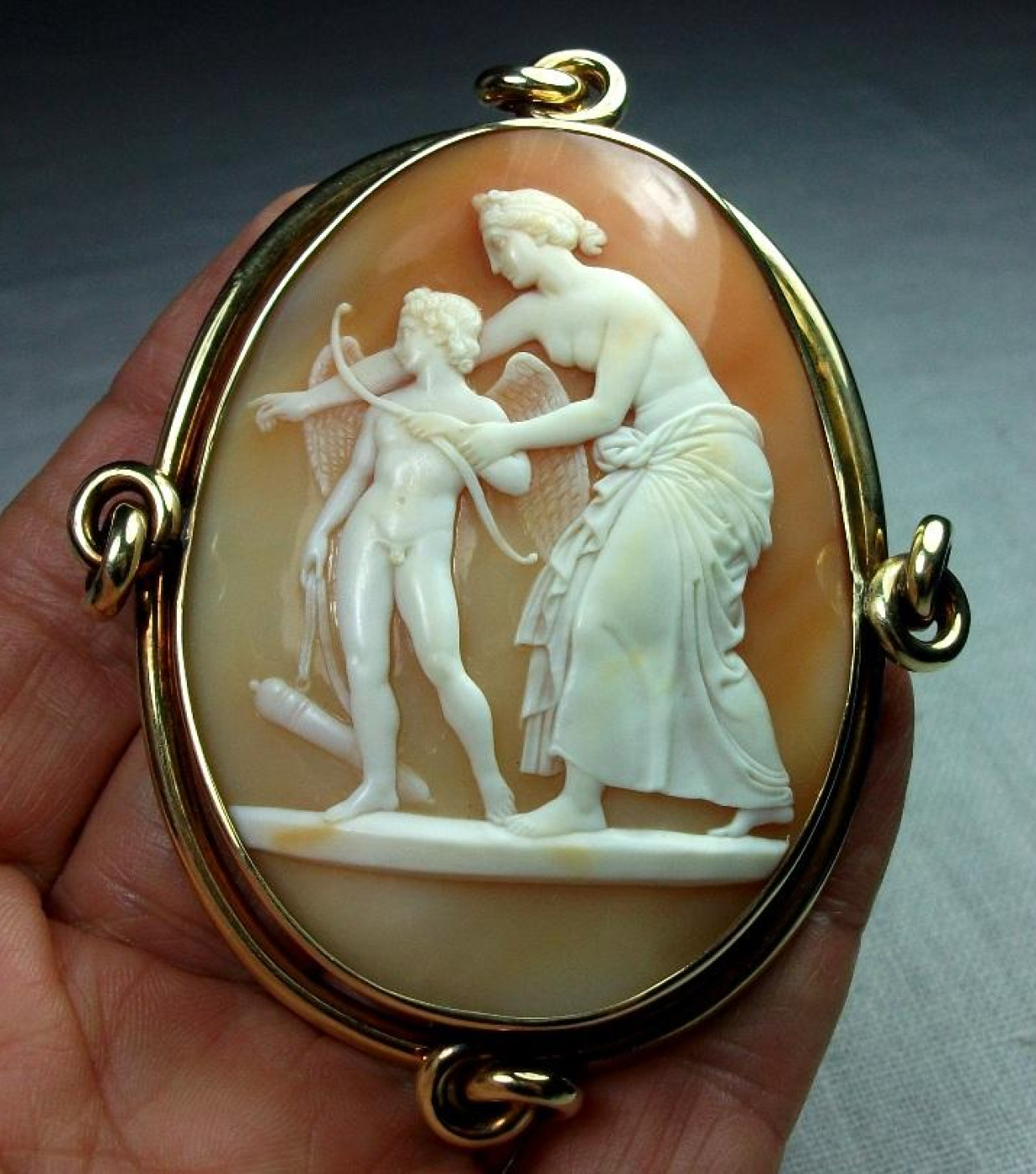 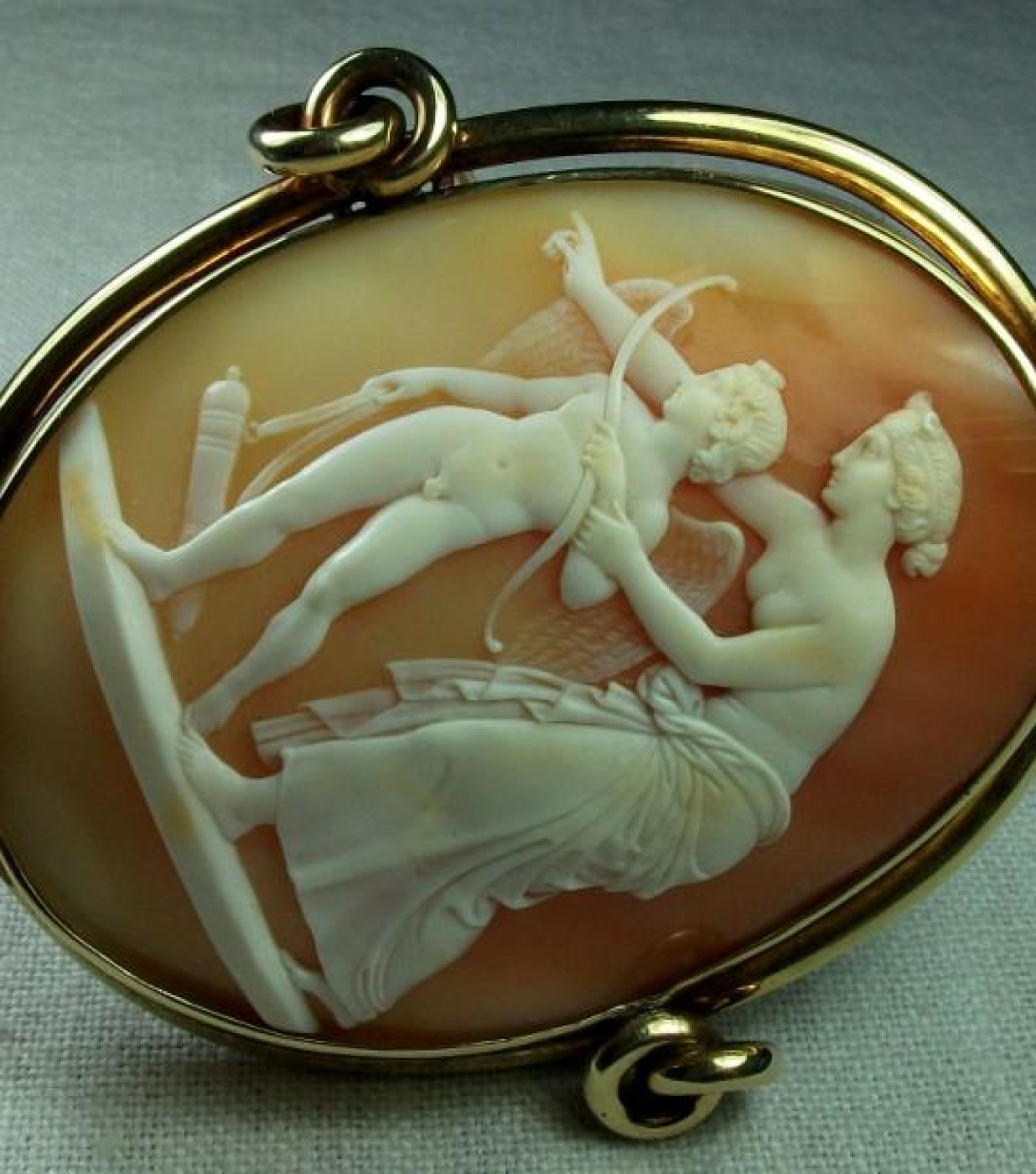 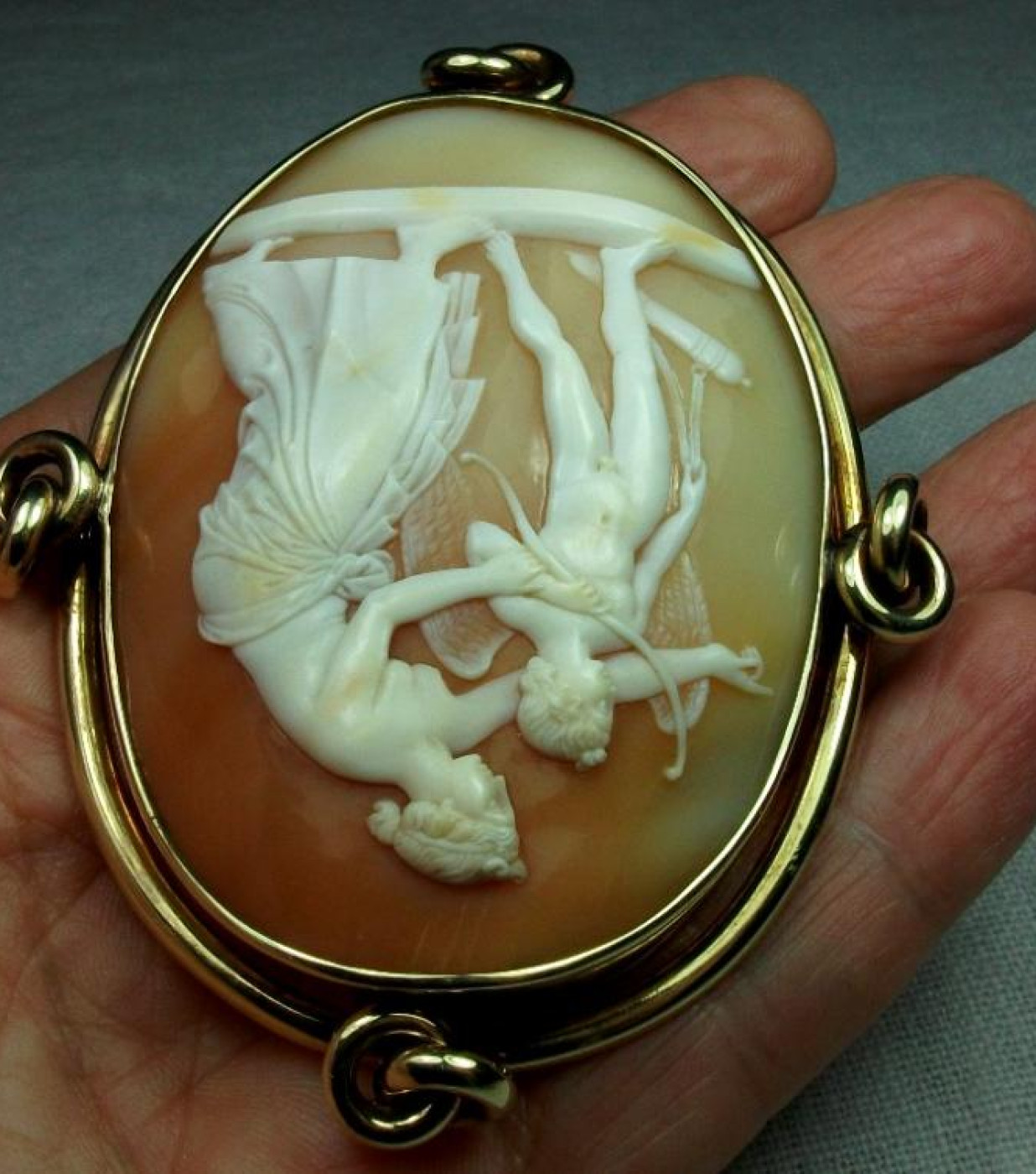 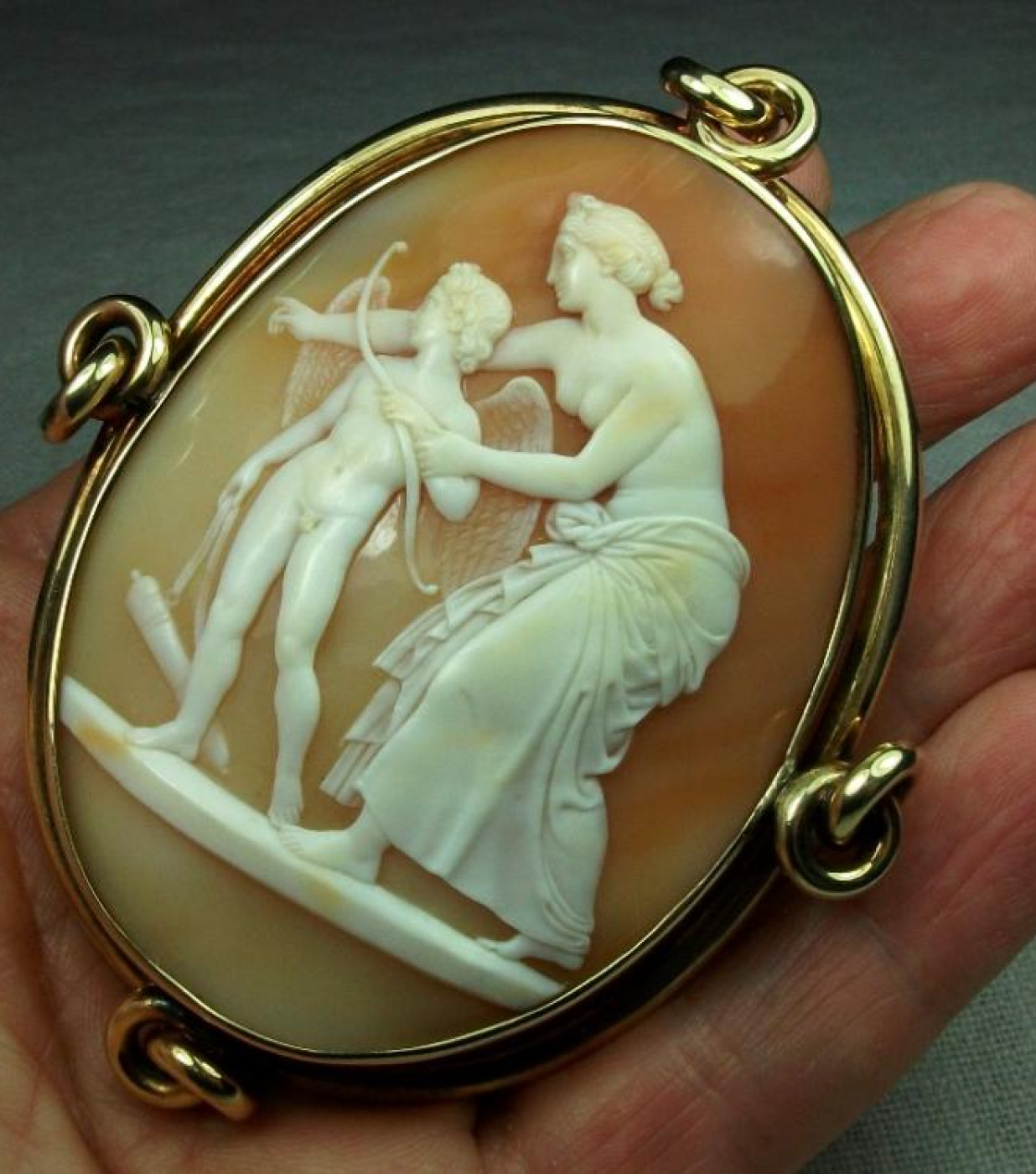 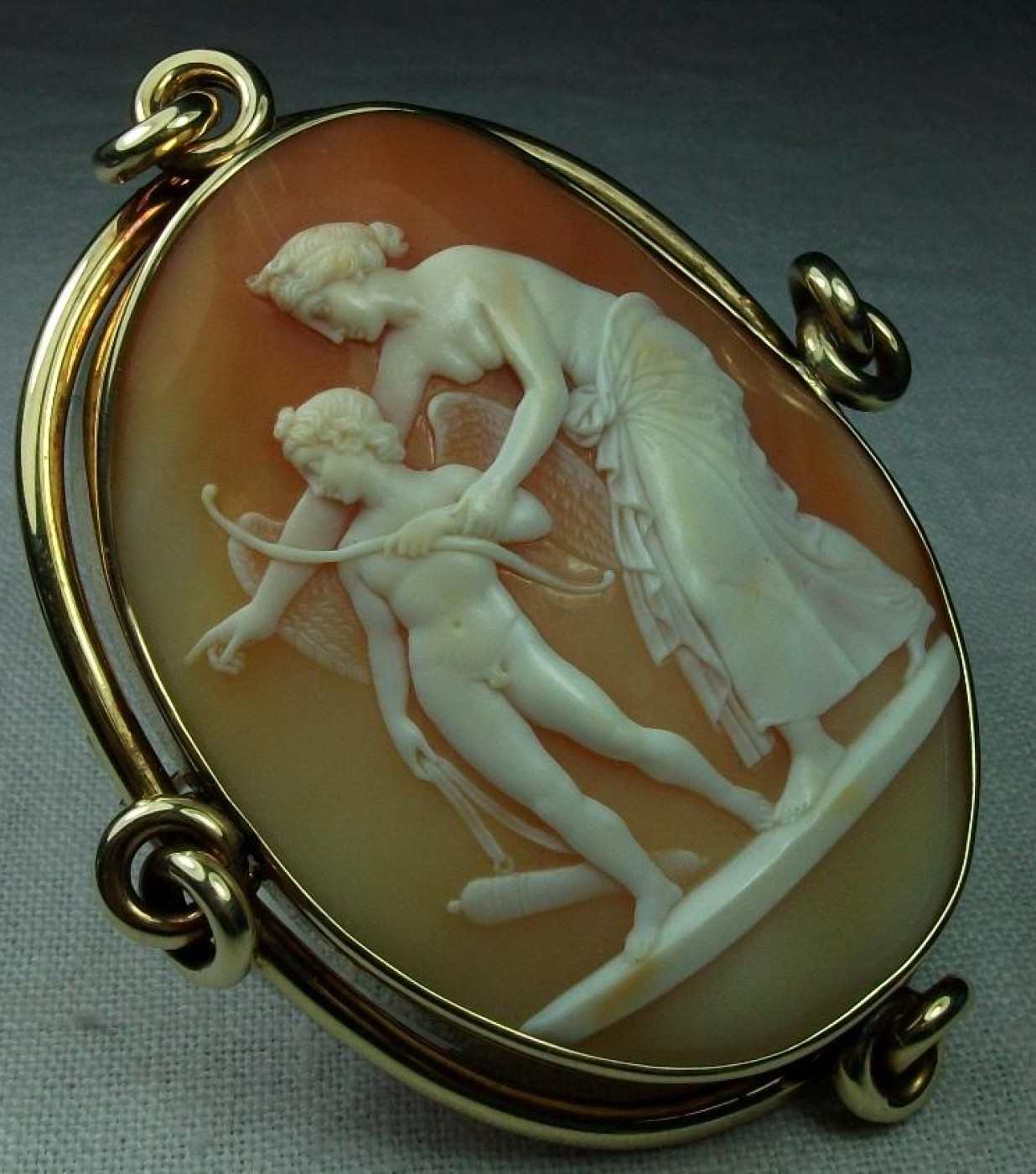 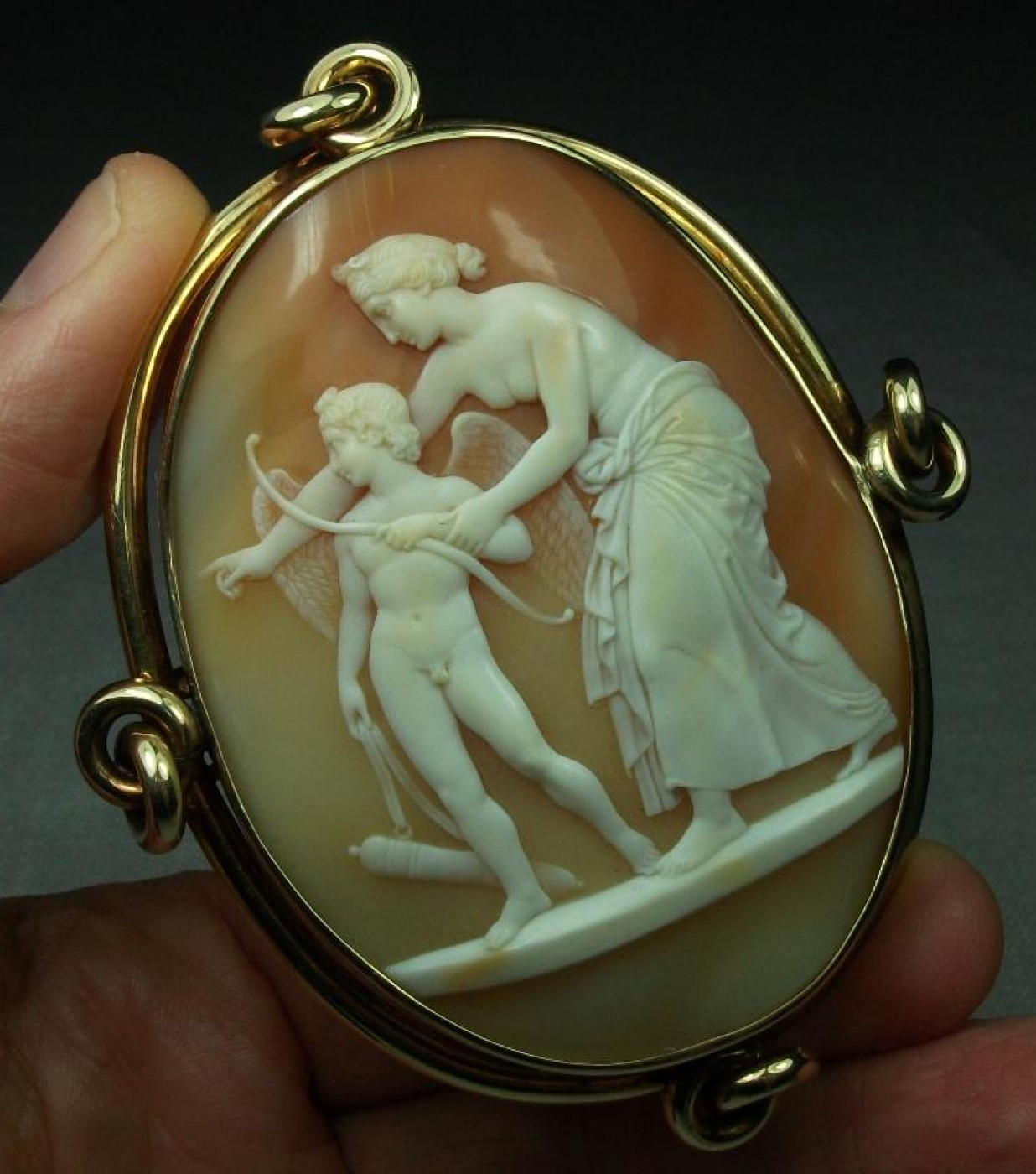 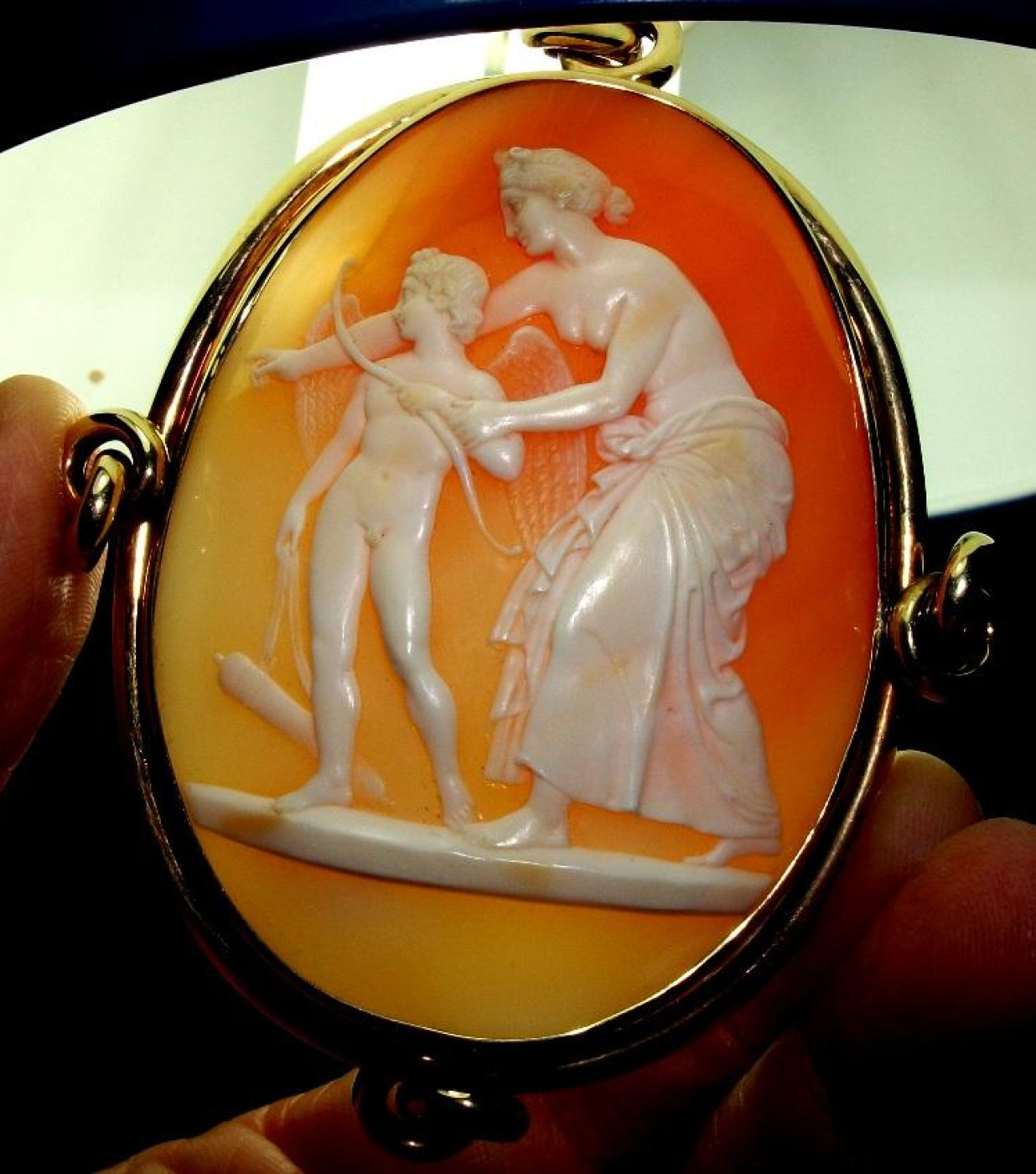 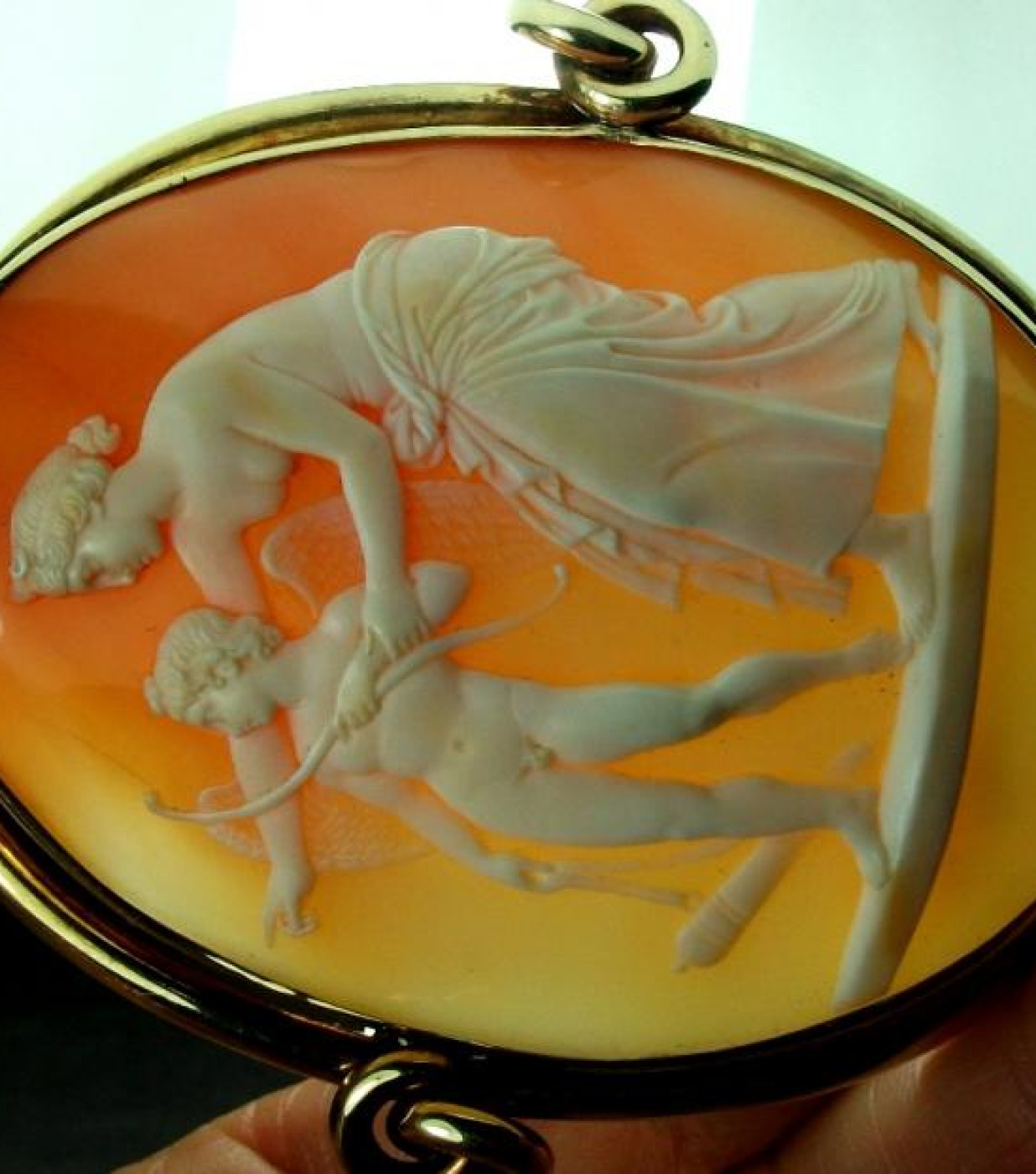 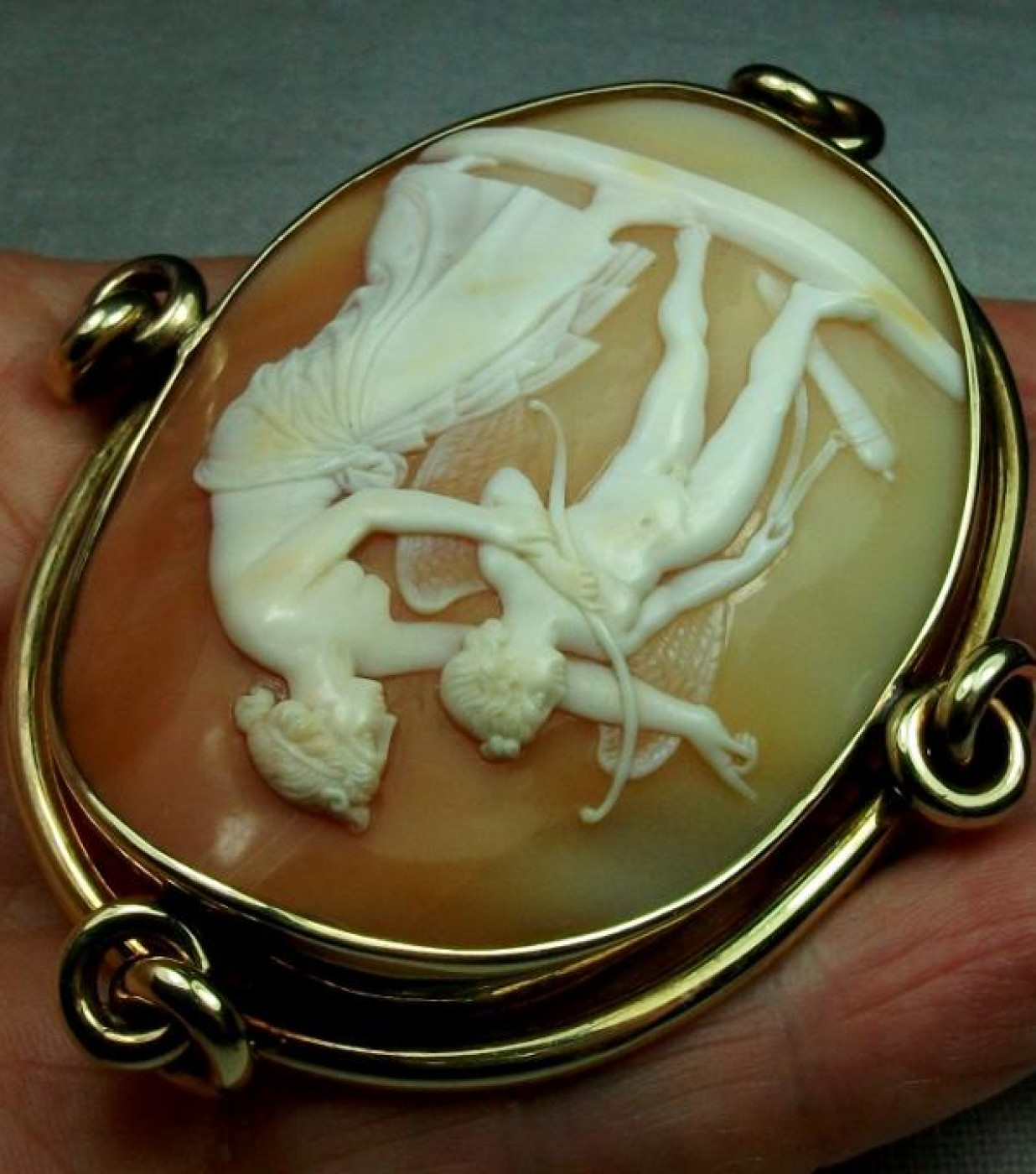 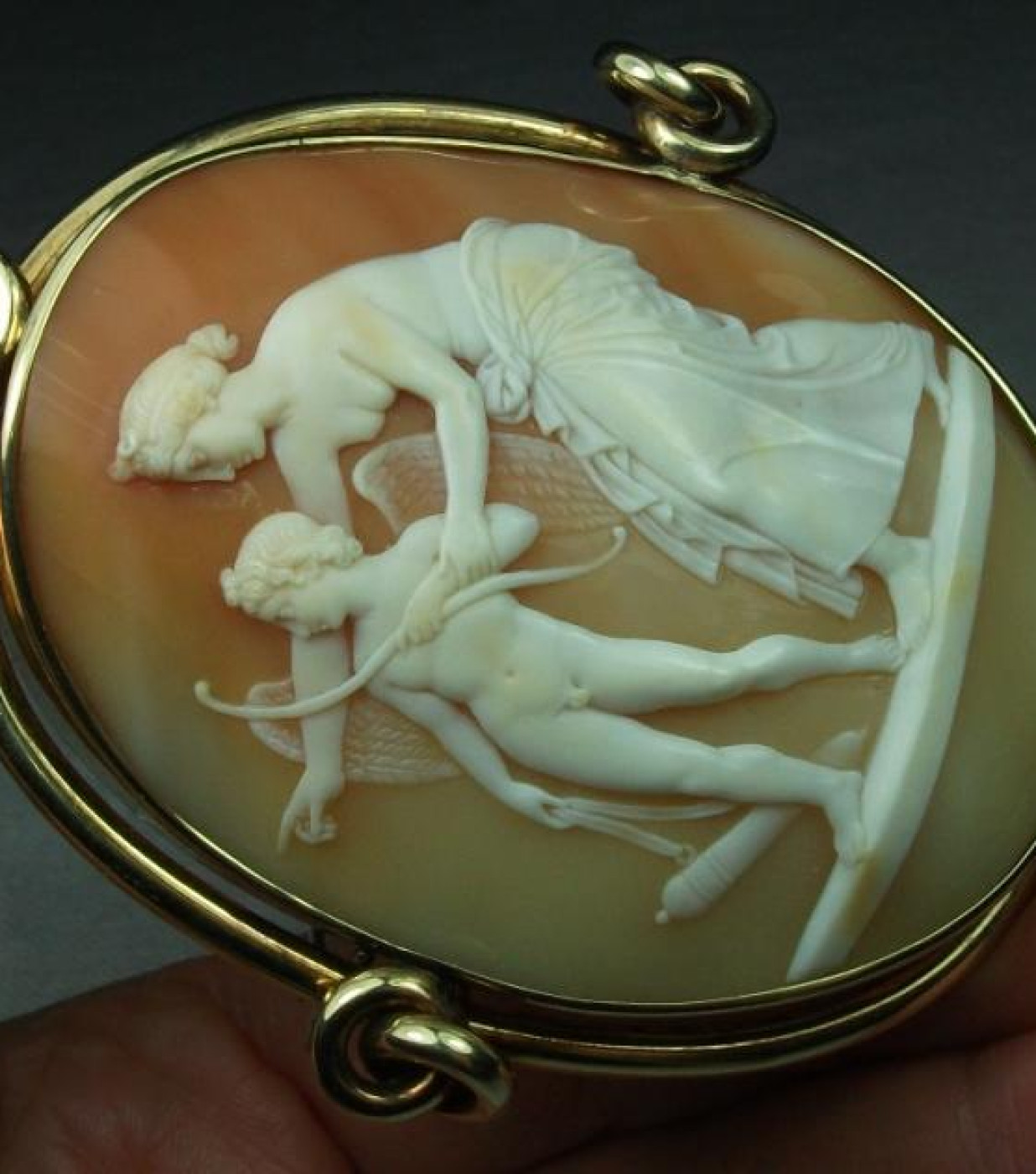 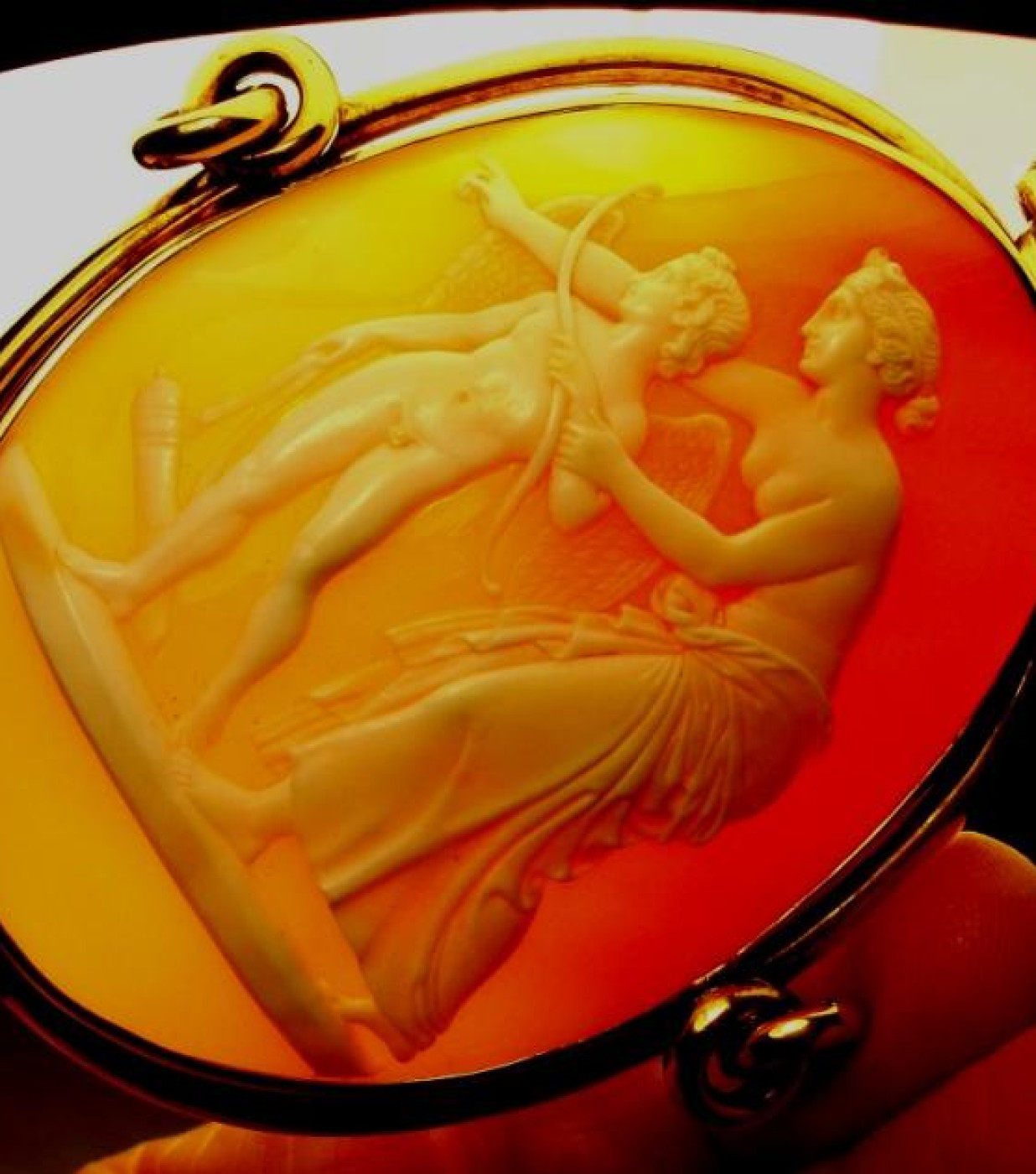 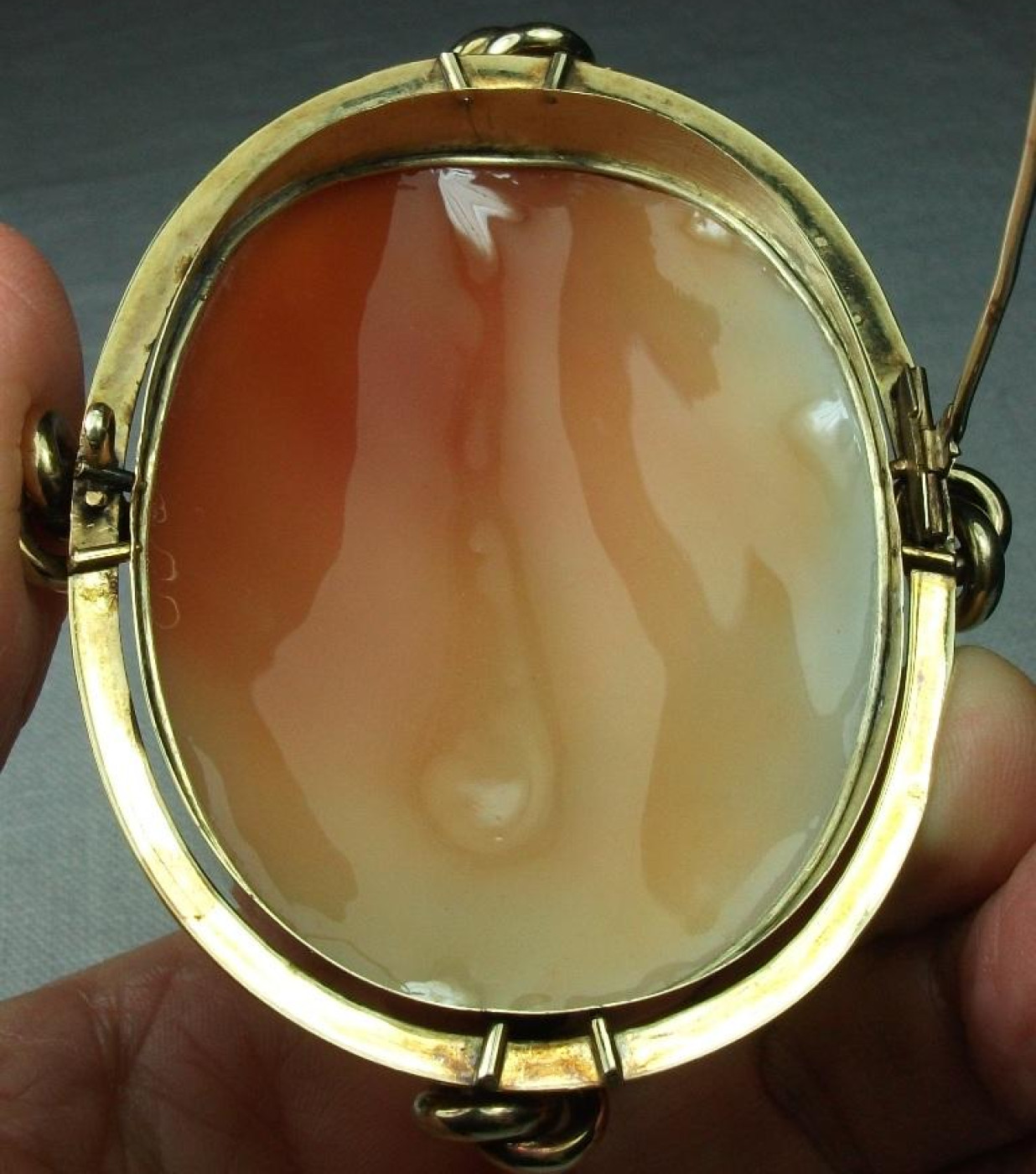 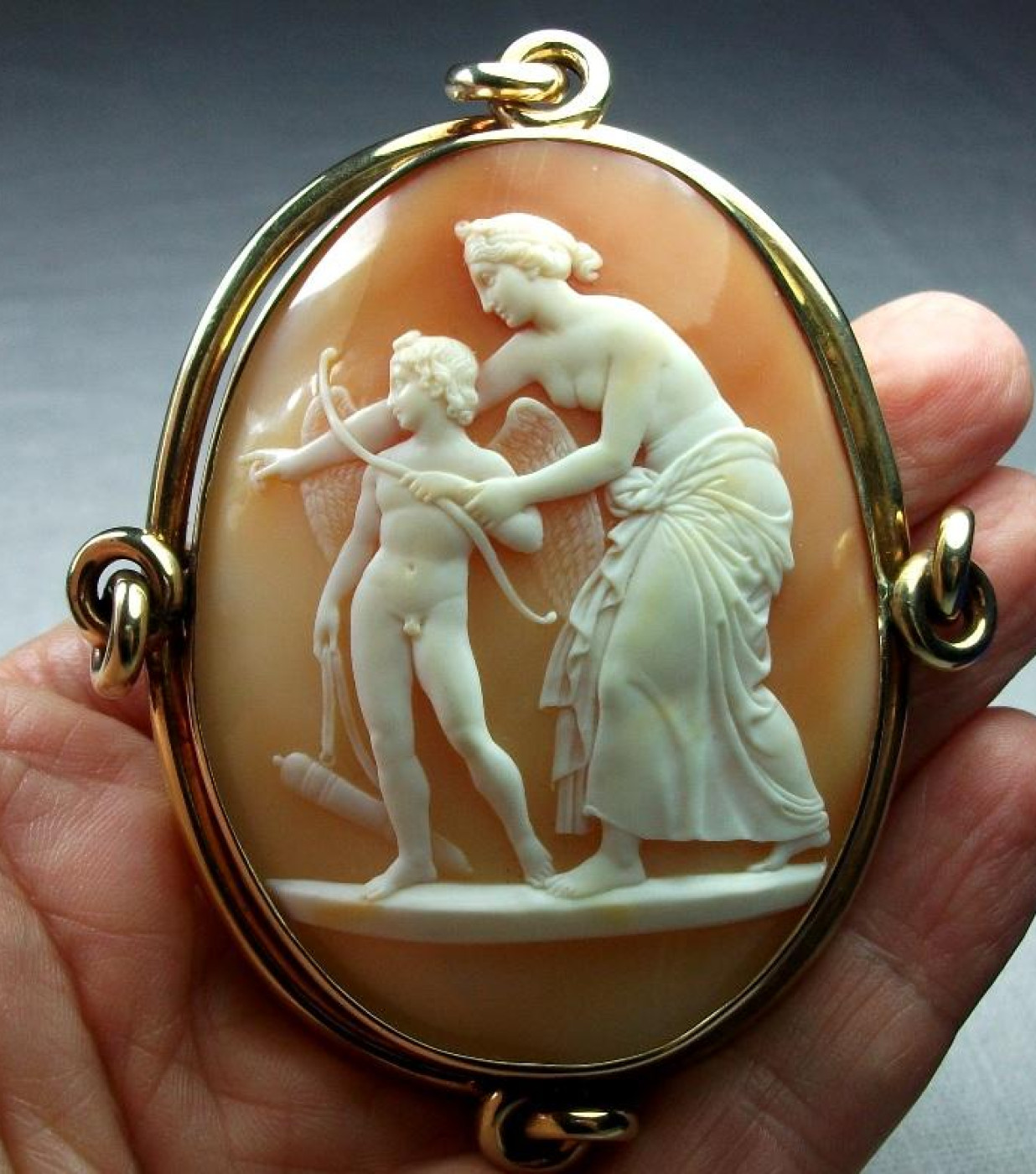 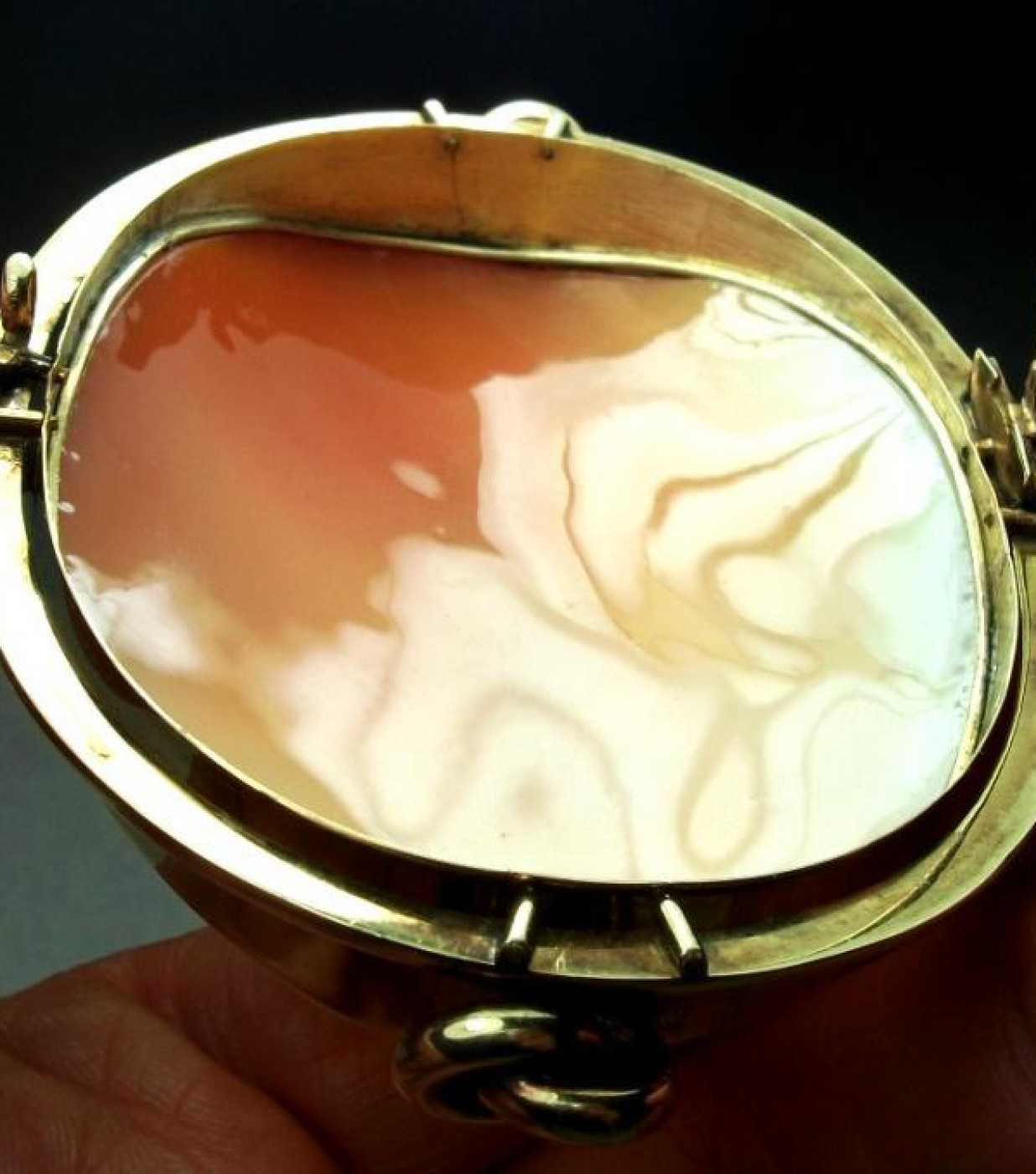 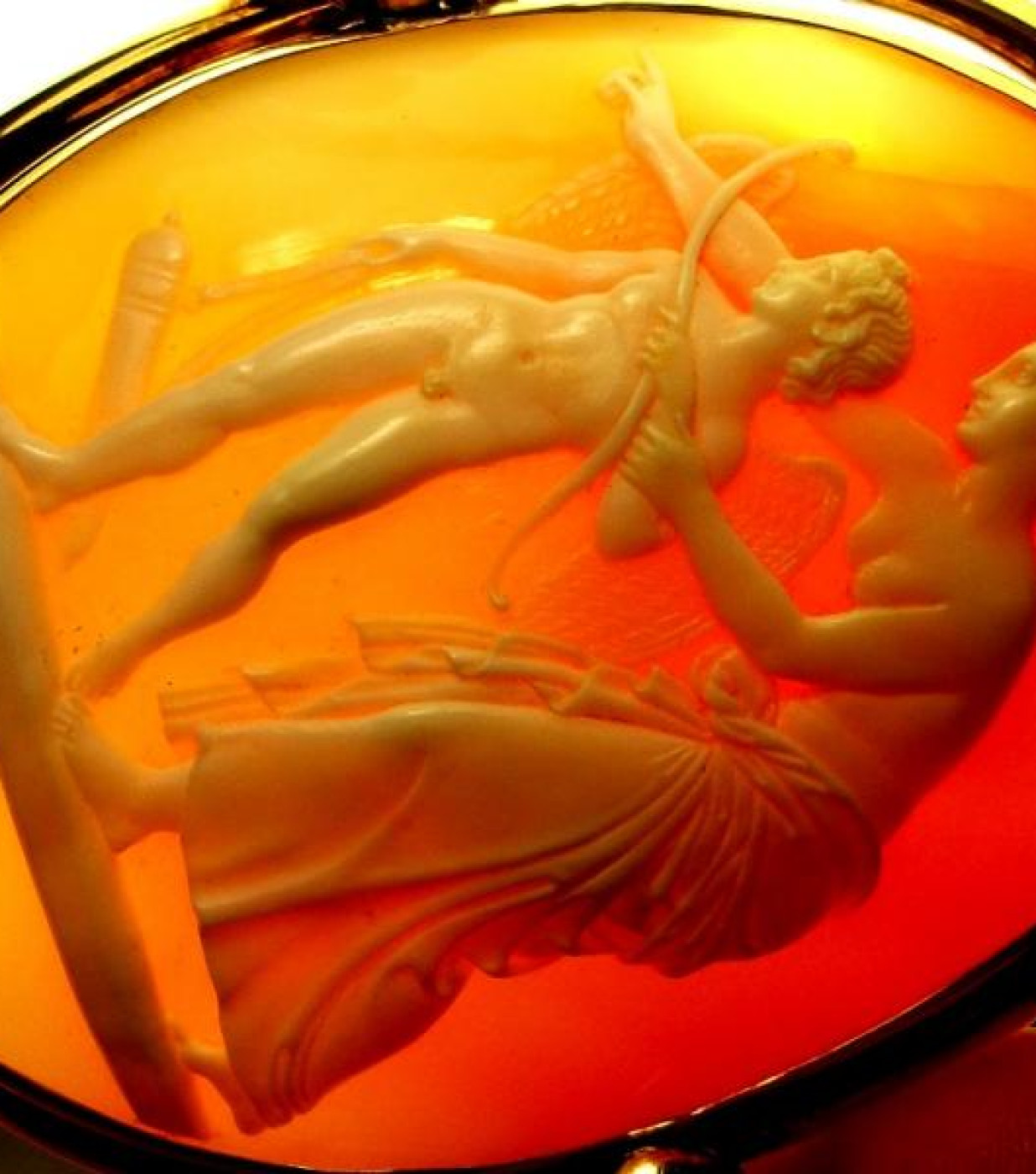 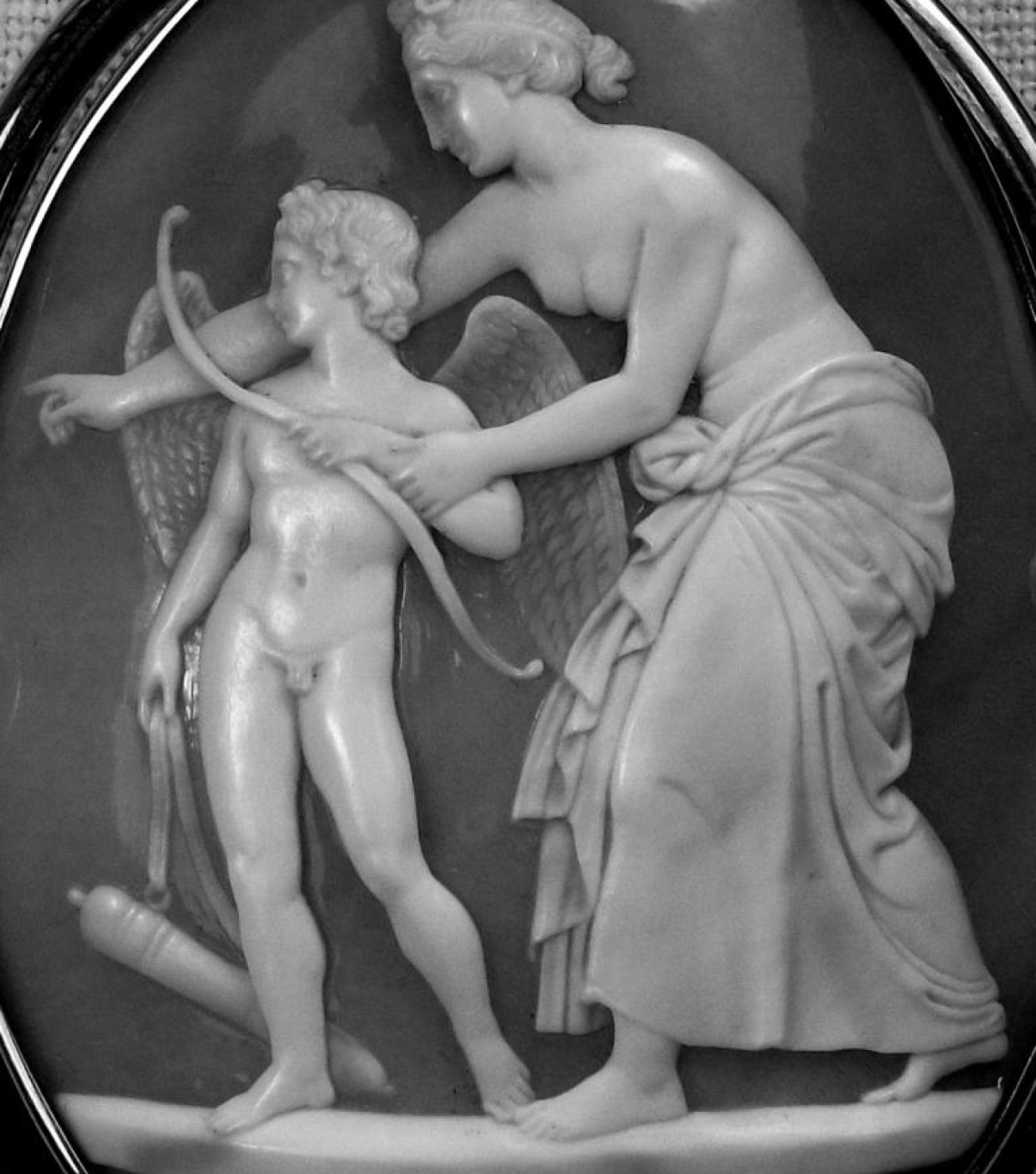 A fantastic Museum Quality cameo depicting a more than rare subject, Venus teaching Cupid to use his bow. This is after a drawing by John Gibson (1790 - 1866) titled "O lend me now the succour of thine arm" drawn probably in 1851 and made for the book by Elizabeth Strutt, The story of Psyche..., [London?], [1851?], [plate for Canto I]. The Gibson drawing is now in the Royal Academy of Arts in London. There are no words to describe the beauty of this cameo. I'm almost sure that this one came from the Saulini studio, the style of the wonderful and oustanding carving is just the Saulini one. It is well known that many of the cameos from their workshop were not signed. The perfect carving leaves breathless as it is a real work of art. Even the type of the shell used is just the same of the ones they often used to carve their cameos, a Cornelian shell with some lighter orangish shadows. The master carved reproduced the original work in every detail making really something of outstanding and more this cameo is so large that the whole scene is even better rendered. The perfection of Venus and Cupid bodies is amazing, they appear as they were sculpted. The proportions are perfect. Look at Venus, she is indicating a point to Cupid, and look at the elegance of the movement of her hand, it is perfect. Her perfect and full breast is an artwork itself, you can even see her breast nipple. She is guiding Cupid arm to put his bow in the right position. Her flowing robe that leaves her bust nude is wonderfully folded and follows the curves of her perfect and elegant body. Cupid too is amazingly carved, his young body and his muscles are masterly carved. His wings are marvellous, so transparent and ethereal. Have you looked at the feet of both figures? Simply amazing. This is a real work of art. From all those perfect details you can understand the skill of the carver. You can see, looking at this scene, a loving mother who wants to teach something of useful to his child to help him for his future. Love can clearly seen and felt in this cameo. The proportions of the whole scene are simply fantastic. Everything in this cameo leaves me speechless and breathless, for the quality of the carving, for the elegance of the subject and for its rarity. A wonderful and massive gold frame completes this artwork. A finest and unique cameo, a real Museum Quality one. To not to be missed.

Venus was a major Roman goddess principally associated with love, beauty and fertility, the equivalent of the Greek goddess Aphrodite. Venus was the consort of Vulcan. She was considered the ancestor of the Roman people by way of its legendary founder, Aeneas, and played a key role in many Roman religious festivals and myths. Venus had no childhood: in every image and each reference she is born adult, nubile, and infinitely desirable. Venus, in many of the late anecdotal myths involving her, is characterized as vain, ill-tempered and easily offended. Though she is one of the few gods of the Greek Pantheon to be actually married, she is frequently unfaithful to her husband. Hephaestus is one of the most even-tempered of the Hellenic deities; in the narrative embedded in the Odyssey Venus seems to prefer Ares, the volatile god of war. She is one of a few characters who played a major part in the original cause of the Trojan War itself: not only did she offer Helen of Sparta to Paris, but the abduction was accomplished when Paris, seeing Helen for the first time, was inflamed with desire to have her—which is Venus' realm. Due to her immense beauty Zeus was frightened that she would be the cause of violence between the other gods. He married her off to Hephaestus, the dour, humourless god of smithing.  Her unhappiness with her marriage caused Aphrodite to seek out companionship from others, most frequently Ares, but also Adonis. Cupid or Eros was son of Venus.