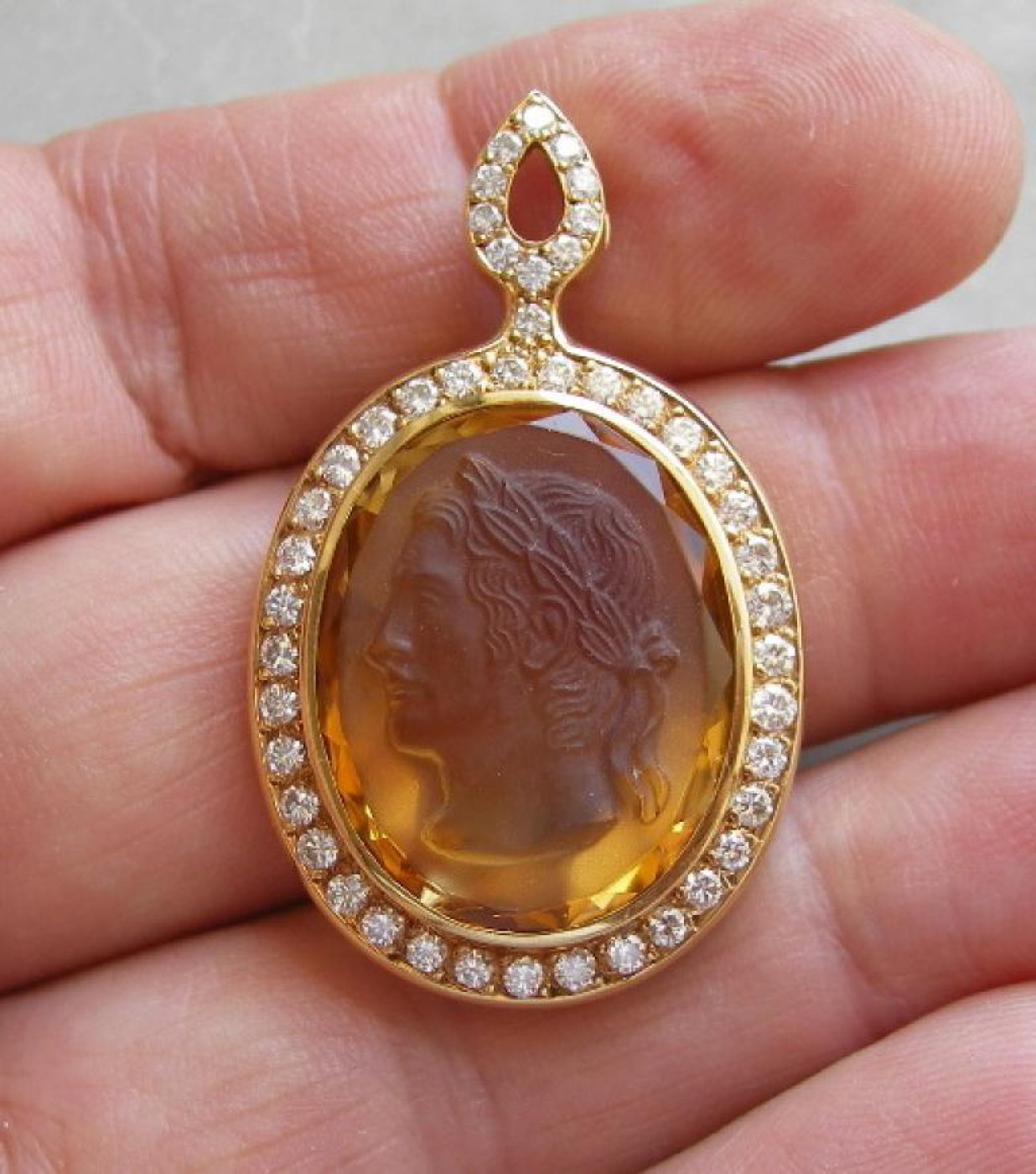 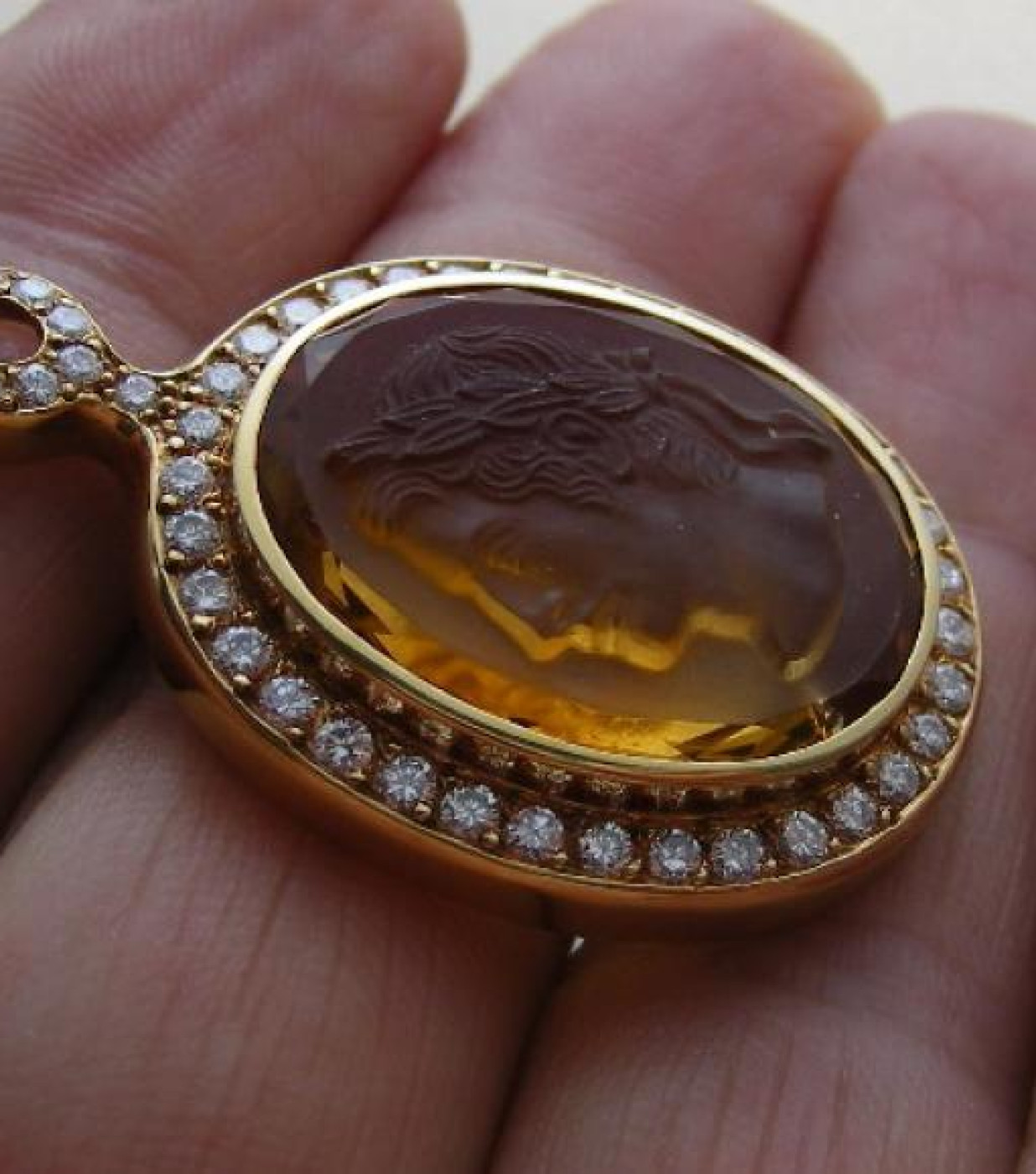 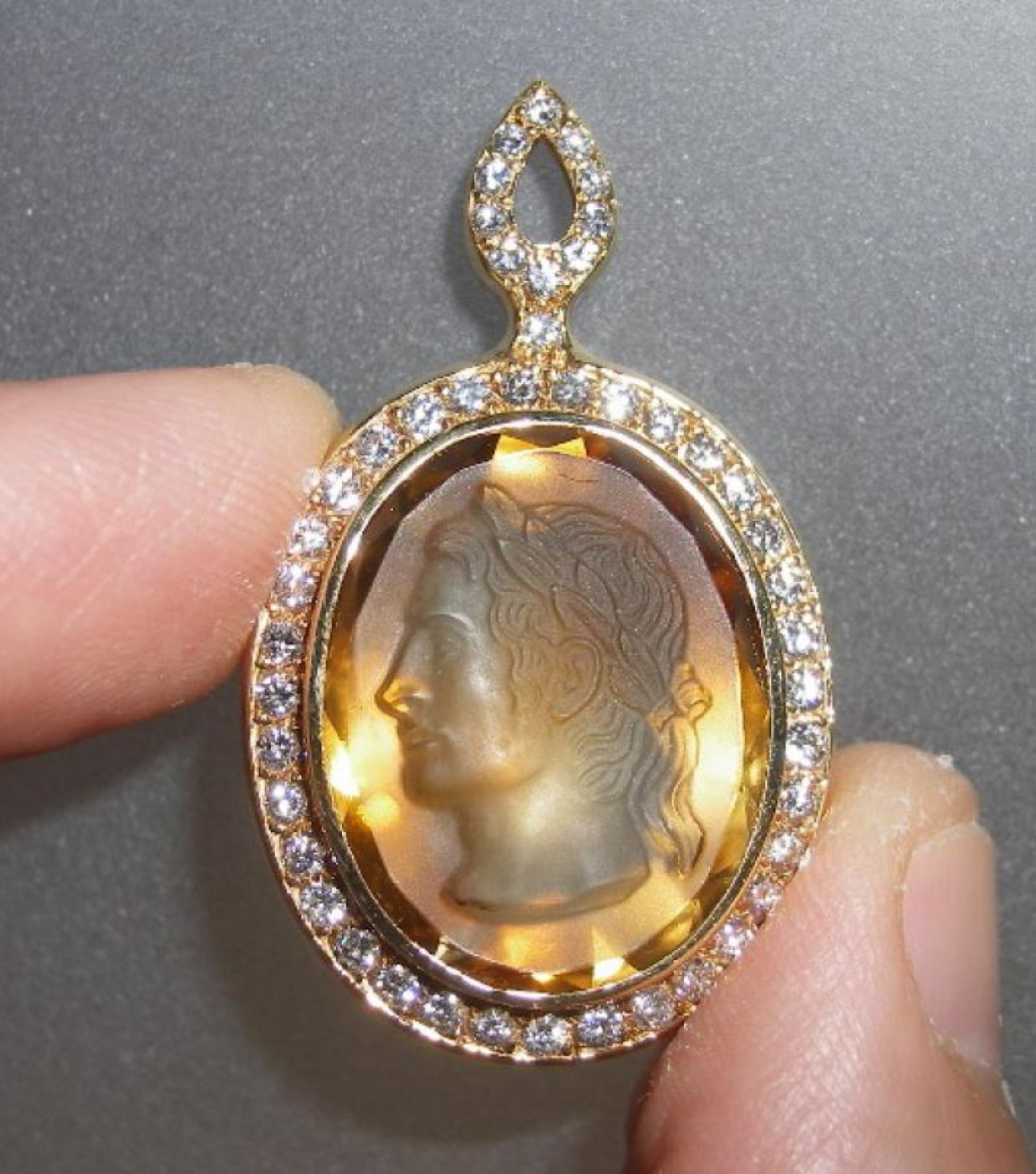 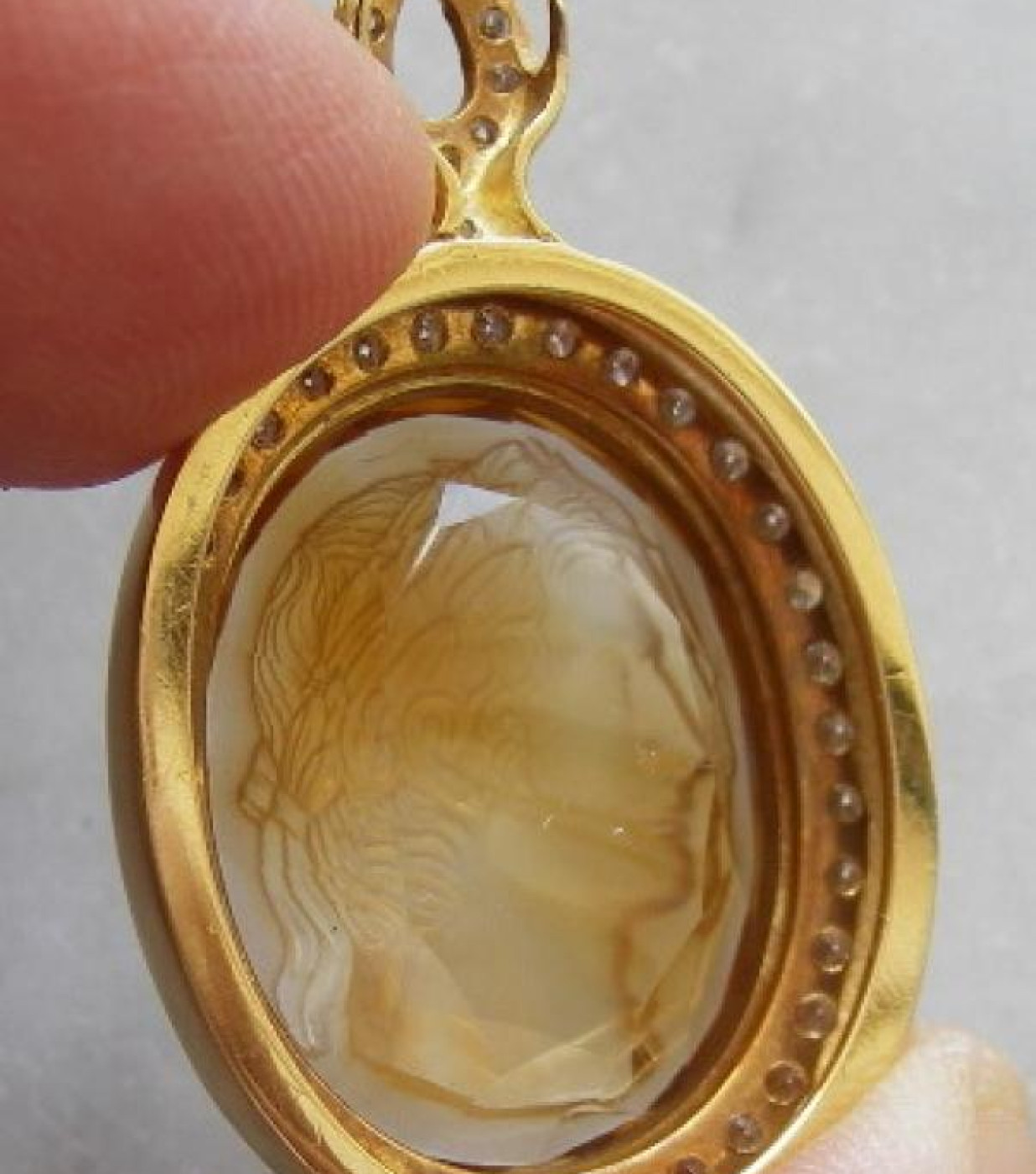 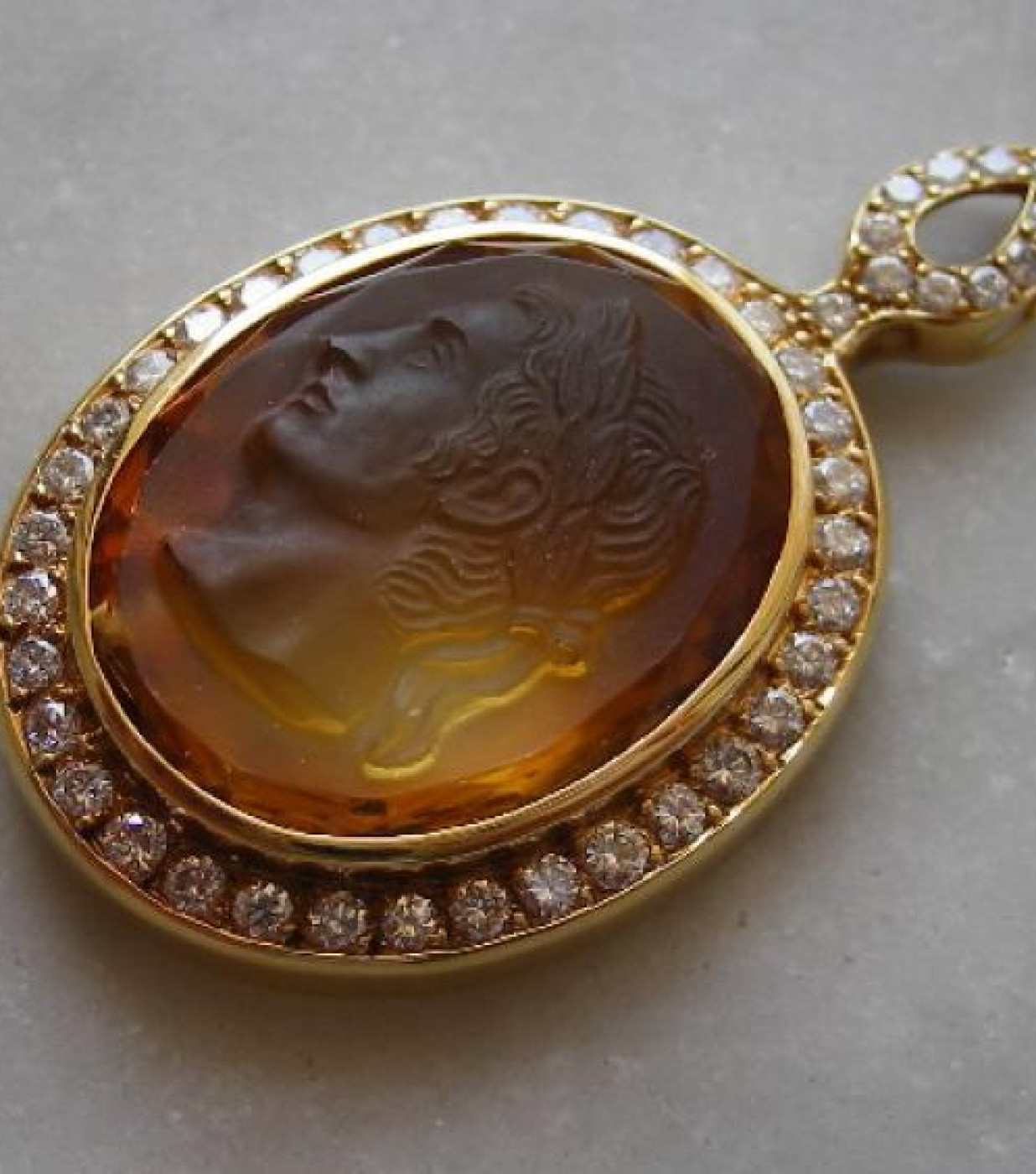 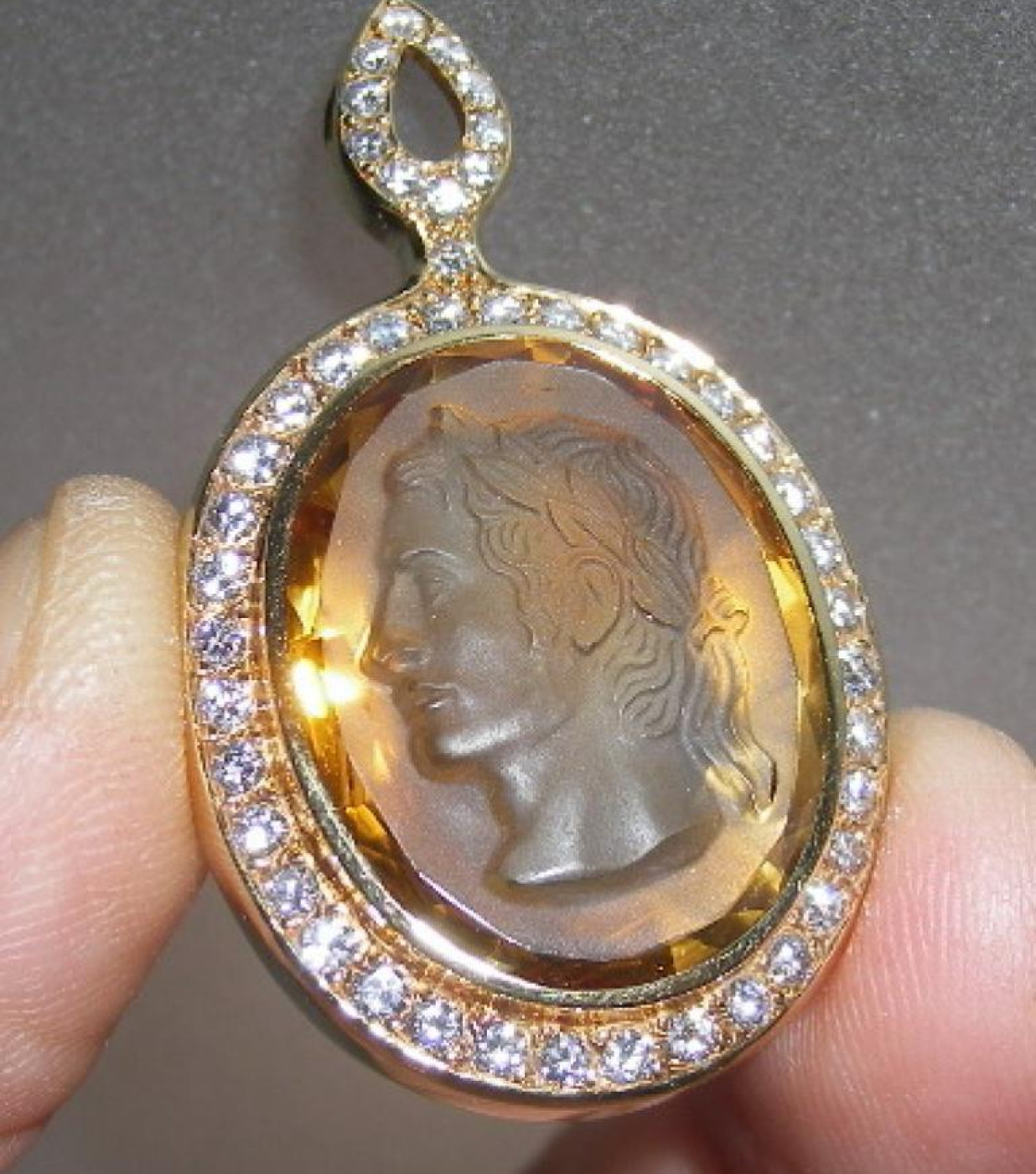 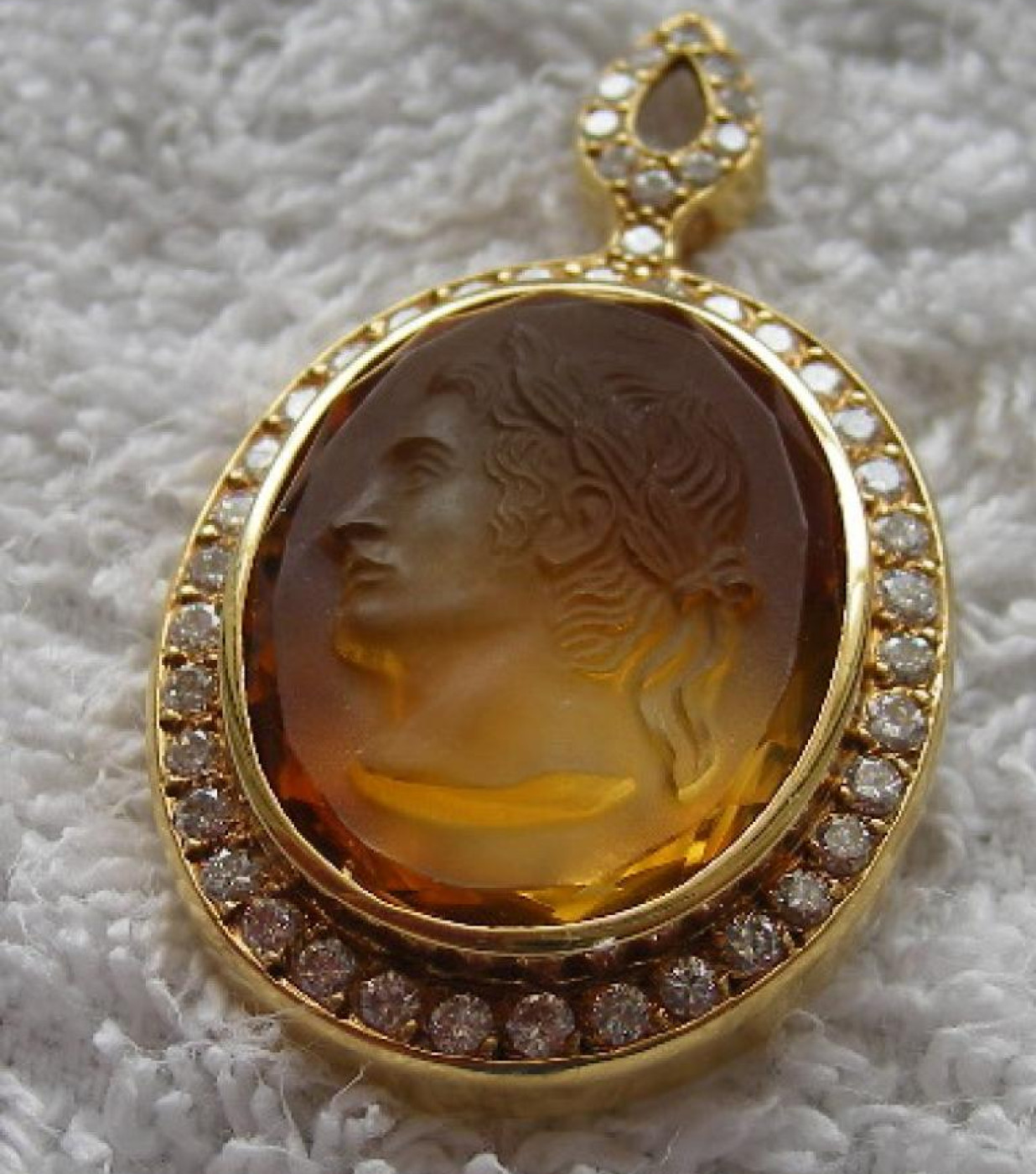 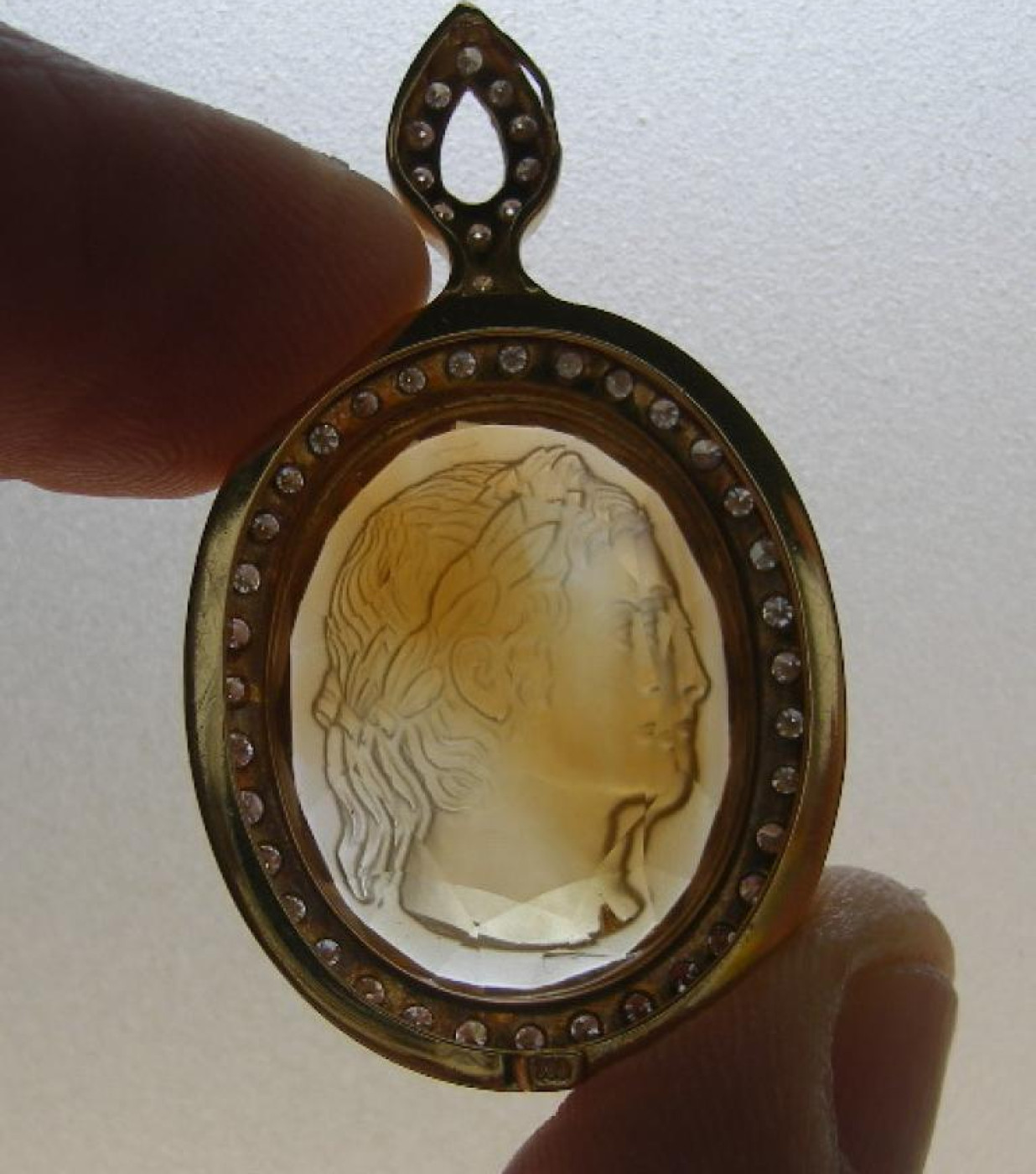 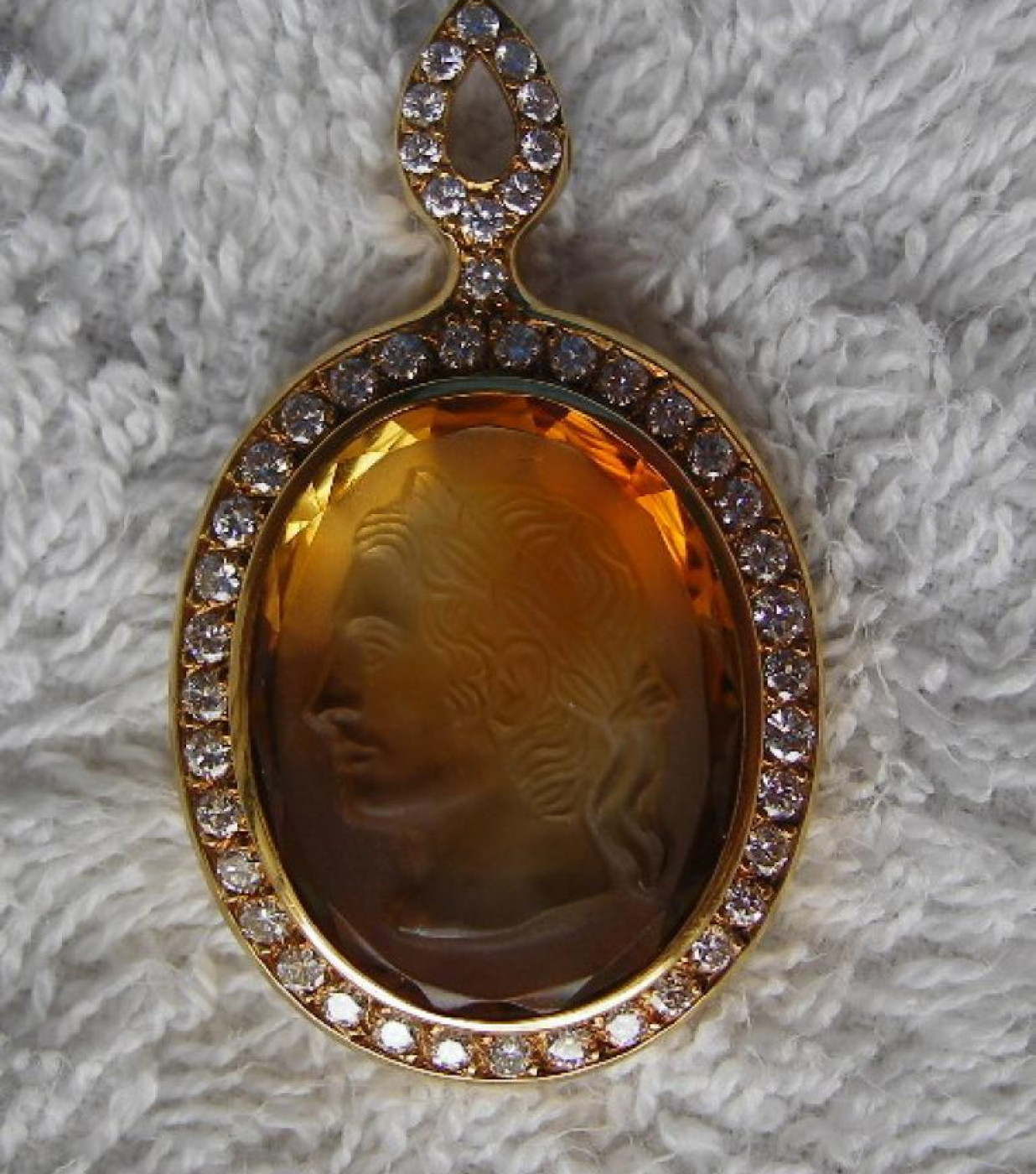 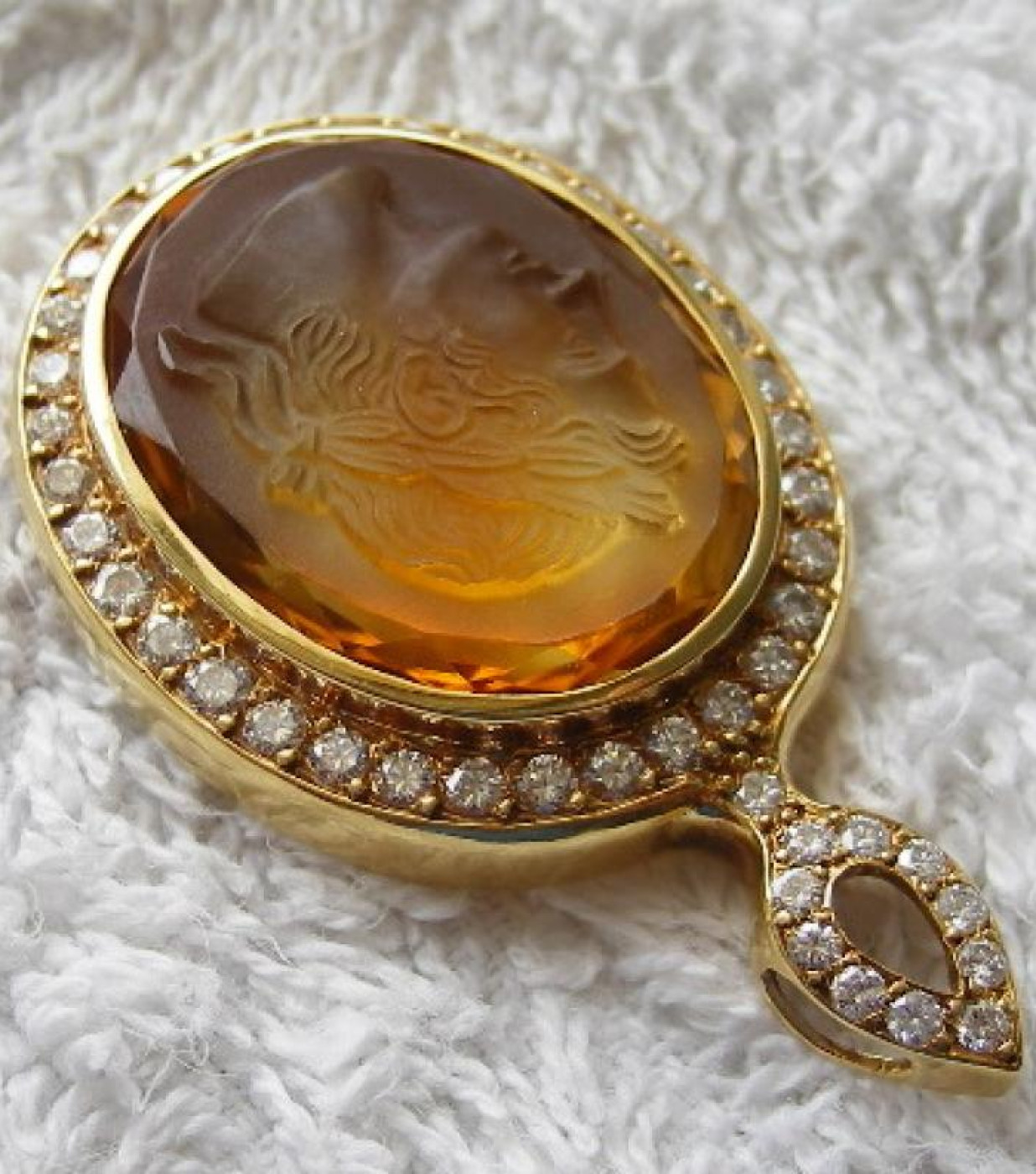 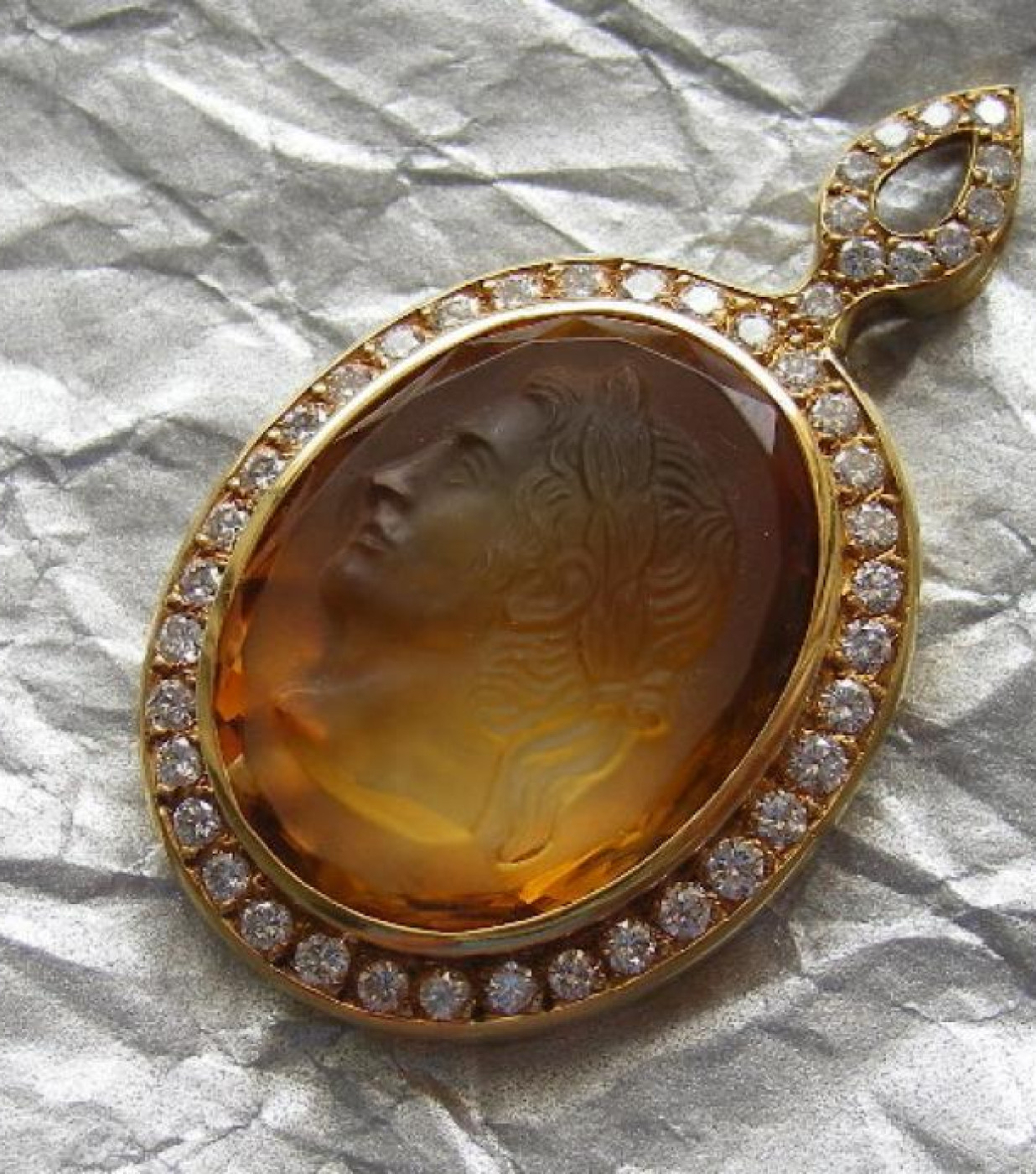 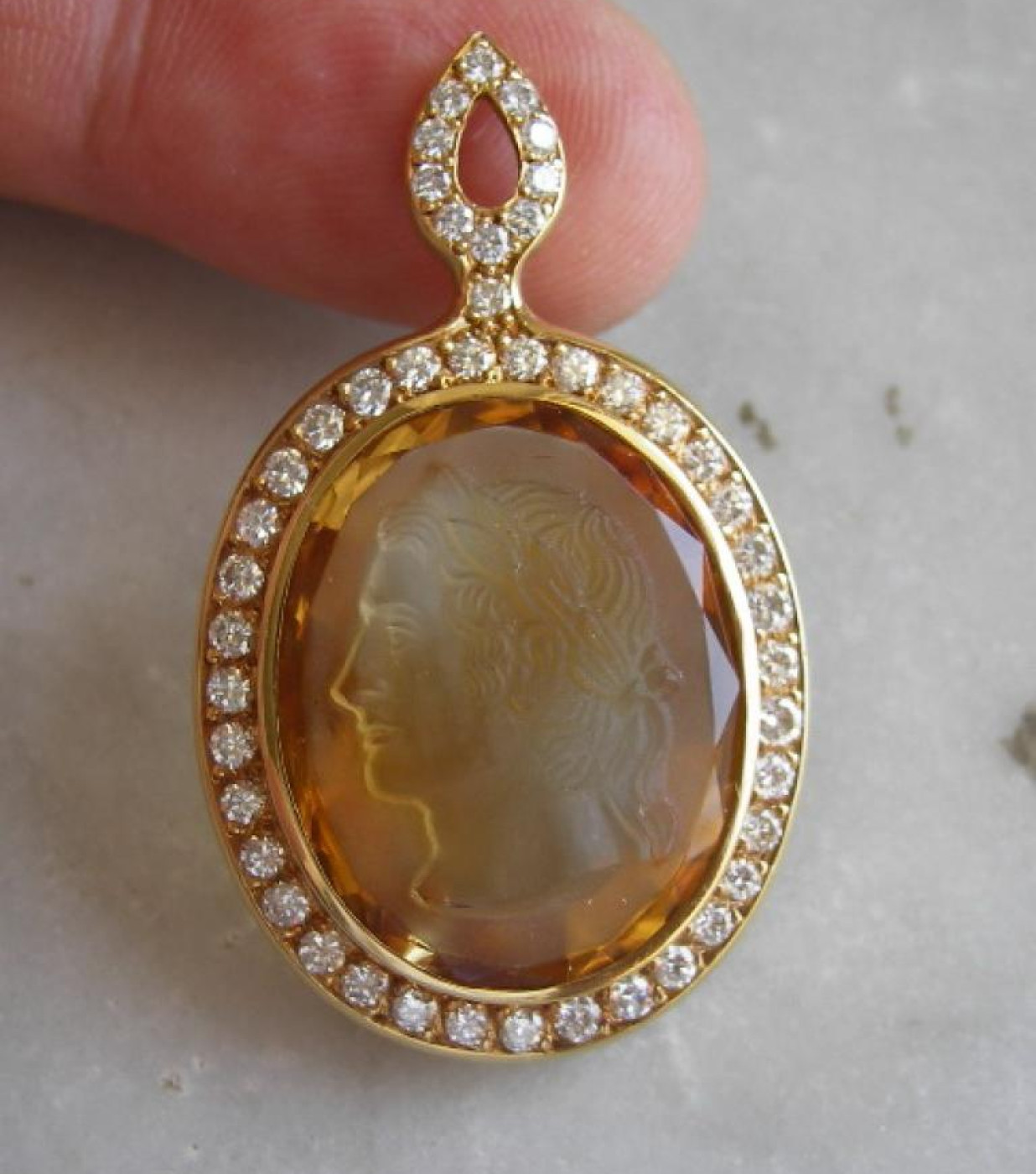 Museum Quality and rarest cameo carved on topaz depicting Julius Cesar. As I have told this cameo is rarest as for the subject as for the material it is carved from. Rarely I have seen cameos carved on topaz, a very hard stone where to carve one. The carving is exceptional. This cameo is really hard to photograph and seen in person is much better, as most of time happens. The beauty of this one is enhanced by sparkling diamond. This one is, with no doubt, one the most beautiful and rarest cameos I have ever handled, the pictures speak by themselves. The frame is spectacular too. This is another masterly carved cameo. A very desirable collectors piece, rarest and museum quality cameo.
A Bit of History:
Gaius Julius Caesar; July 13, 100 BC– March 15, 44 BC), was a Roman military and political leader. He played a critical role in the transformation of the Roman Republic into the Roman Empire.A politician of the populares tradition, he formed an unofficial triumvirate with Marcus Licinius Crassus and Gnaeus Pompeius Magnus which dominated Roman politics for several years, opposed in the Roman Senate by optimates like Marcus Porcius Cato and Marcus Calpurnius Bibulus His conquest of Gaul extended the Roman world all the way to the Atlantic Ocean, and he also conducted the first Roman invasion of Britain in 55 BC; the collapse of the triumvirate, however, led to a stand-off with Pompey and the Senate. Leading his legions across the Rubicon, Caesar began a civil war in 49 BC from which he became the undisputed master of the Roman world.After assuming control of government, he began extensive reforms of Roman society and government. He was proclaimed dictator for life (dictator perpetuus), and heavily centralised the bureaucracy of the Republic. However, a group of senators, led by Caesar's former friend Marcus Junius Brutus, assassinated the dictator on the Ides of March (March 15) in 44 BC, hoping to restore the normal running of the Republic. However, the result was another Roman civil war, which ultimately led to the establishment of a permanent autocracy by Caesar's adopted heir, Gaius Octavianus. In 42 BC, two years after his assassination, the Senate officially sanctified Caesar as one of the Roman deities.Much of Caesar's life is known from his own Commentaries (Commentarii) on his military campaigns, and other contemporary sources such as the letters and speeches of his political rival Cicero, the historical writings of Sallust, and the poetry of Catullus. Many more details of his life are recorded by later historians, such as Appian, Suetonius, > Plutarch, Cassius Dio and Strabo.