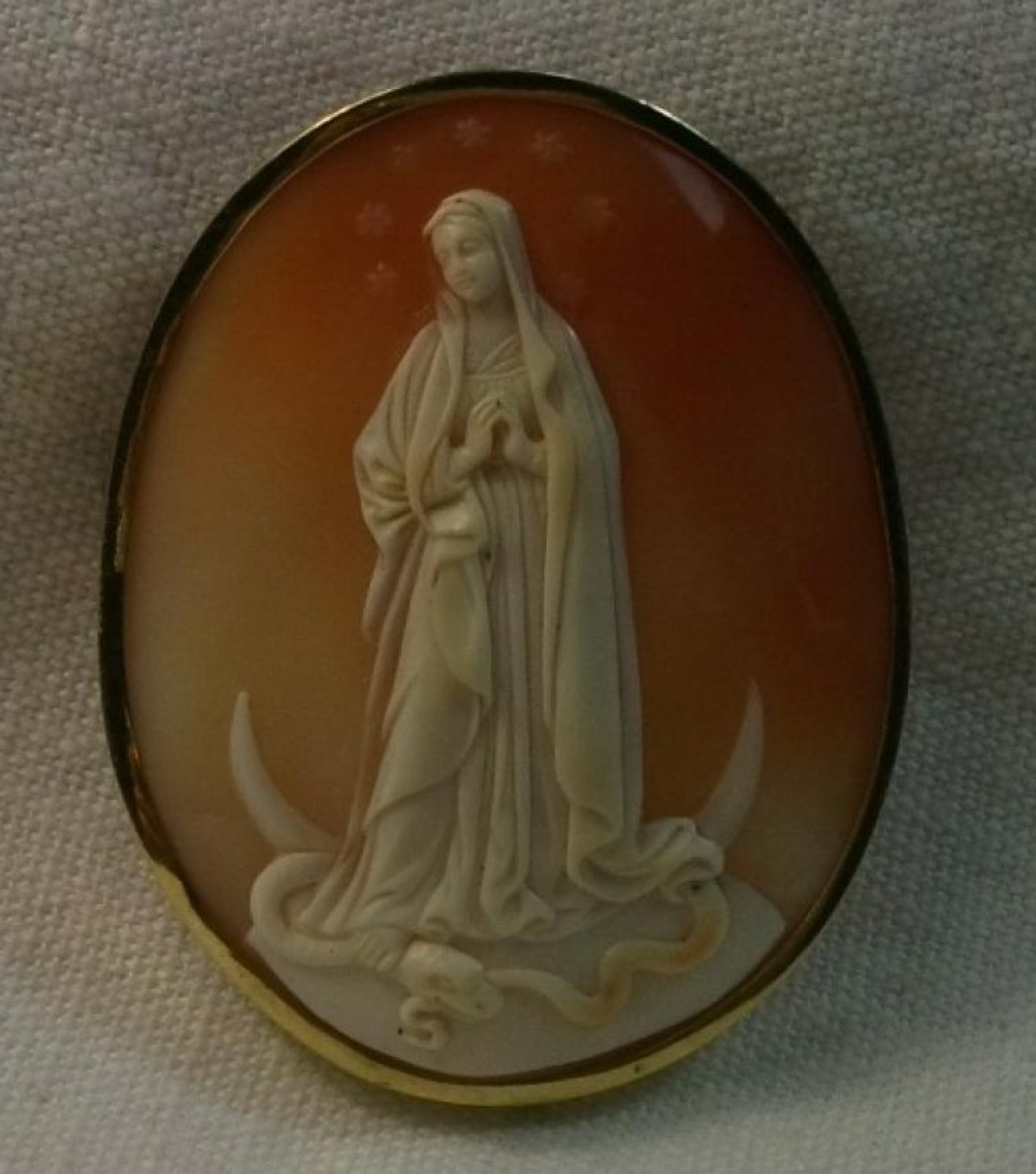 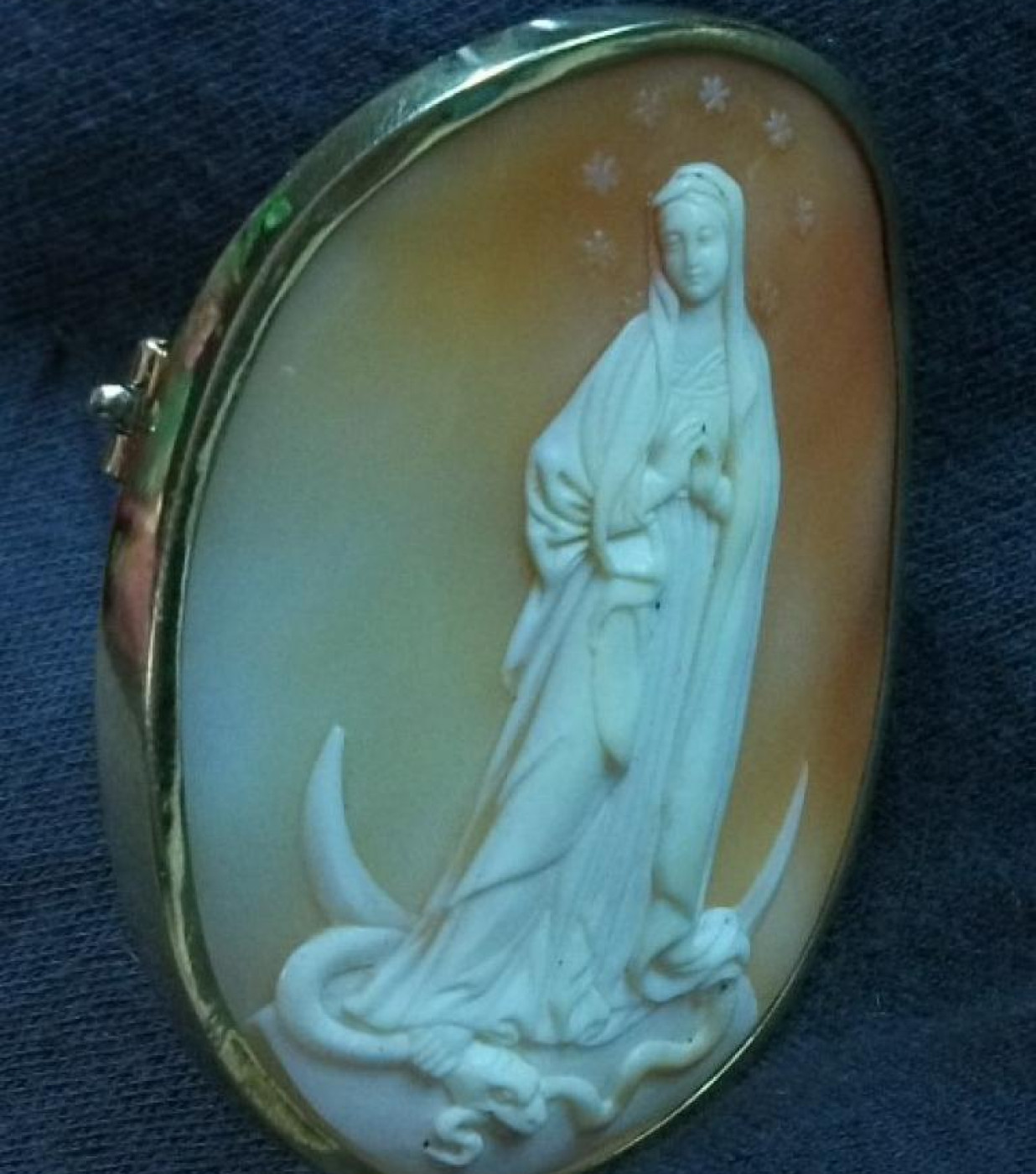 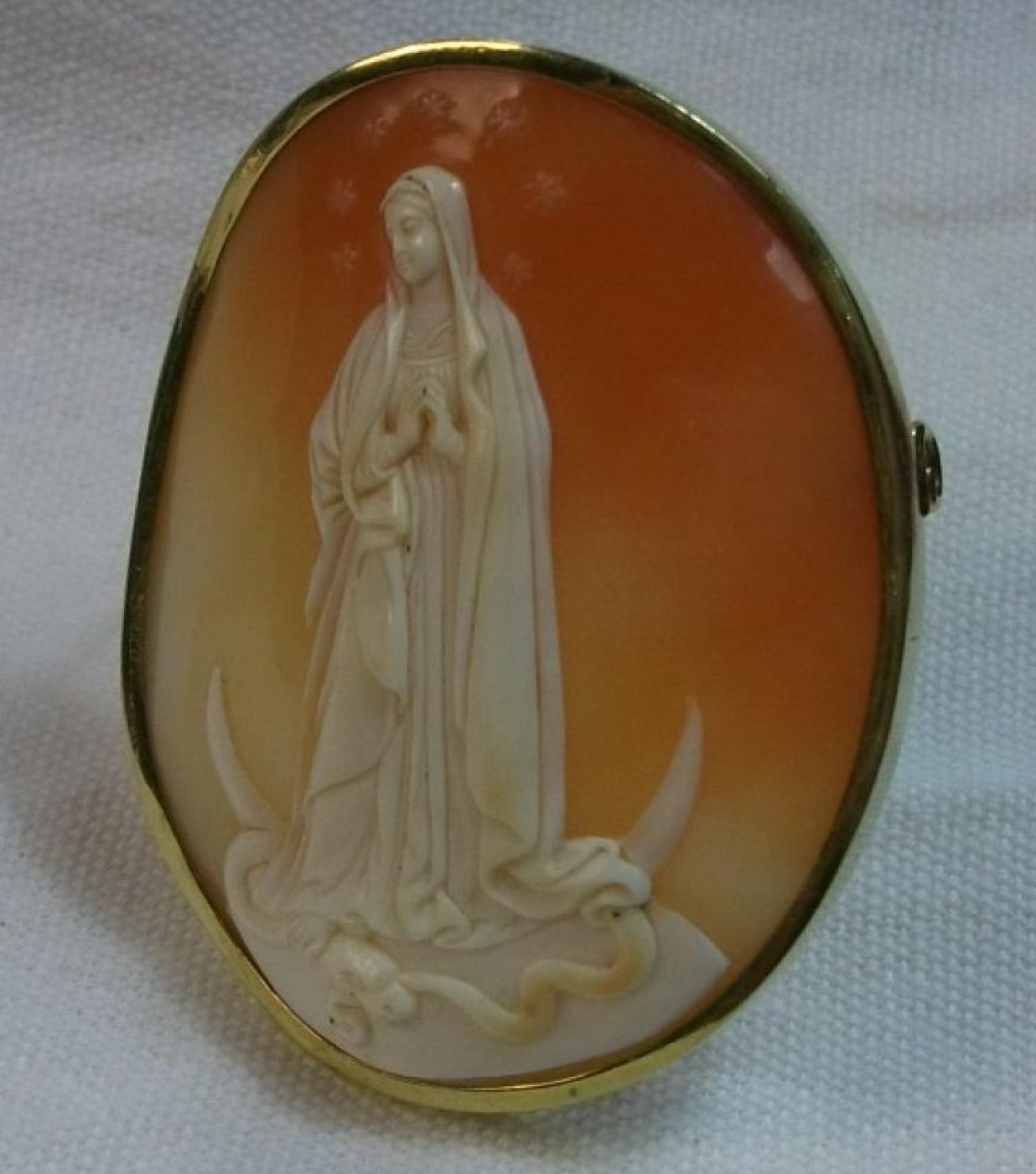 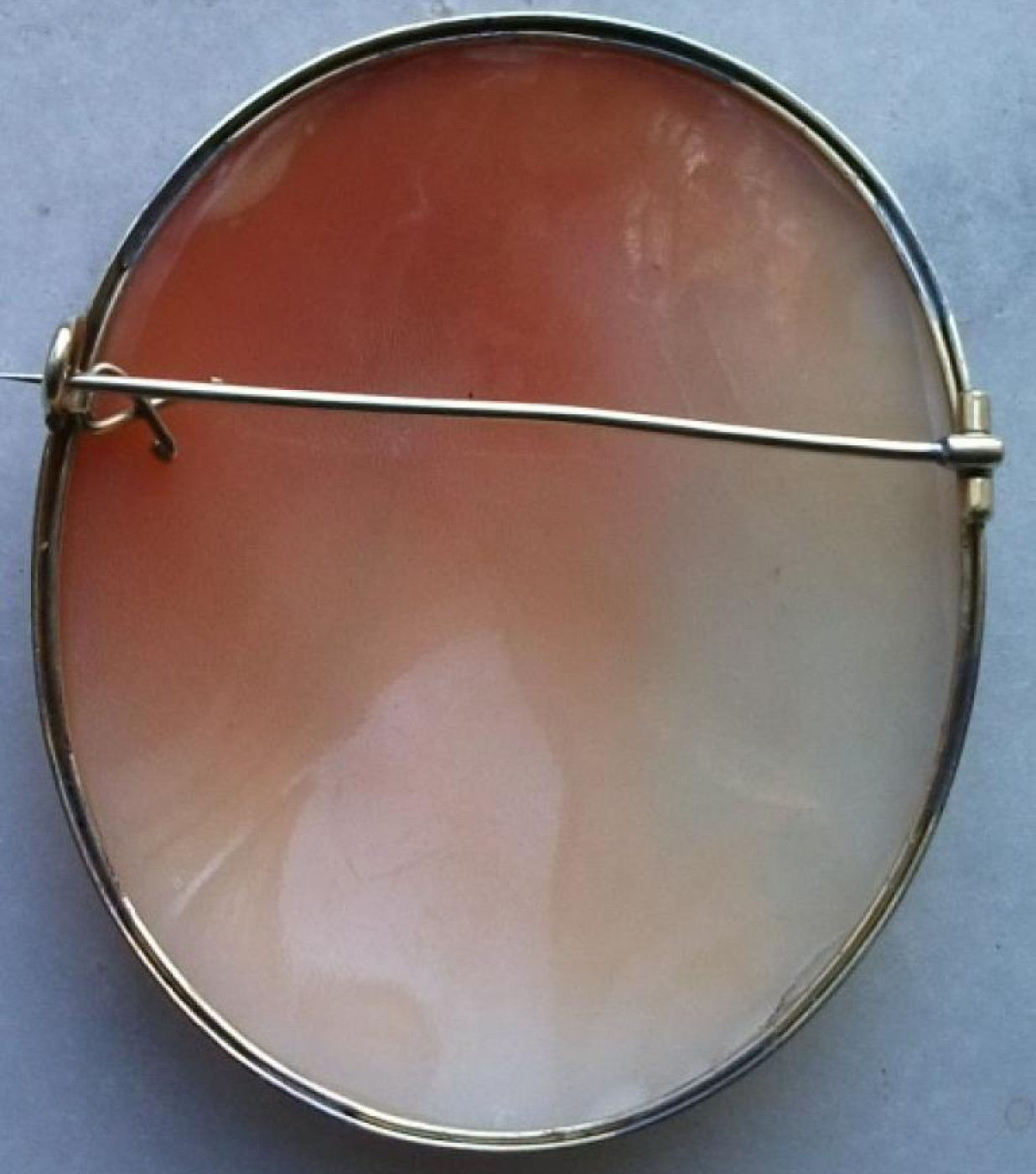 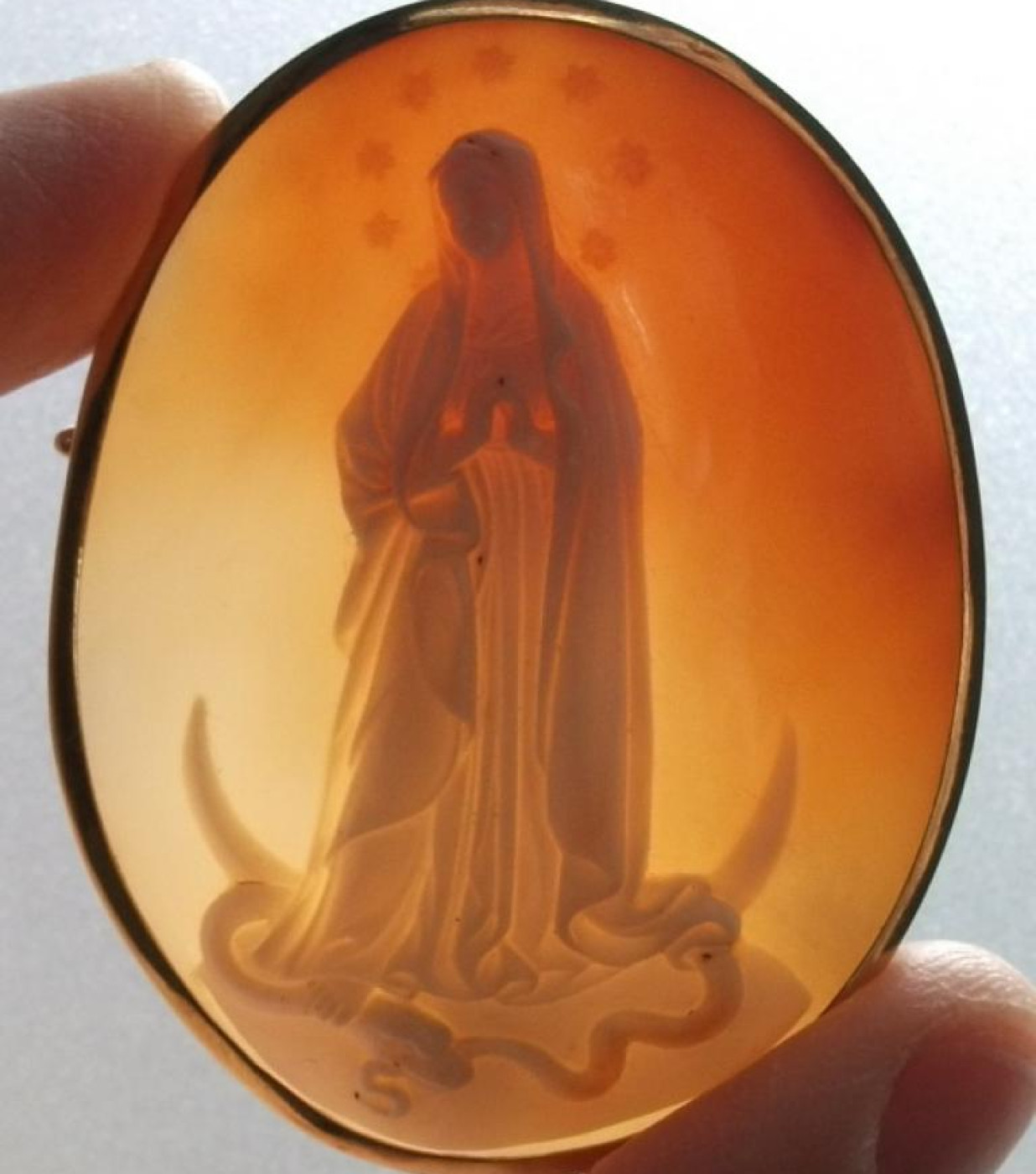 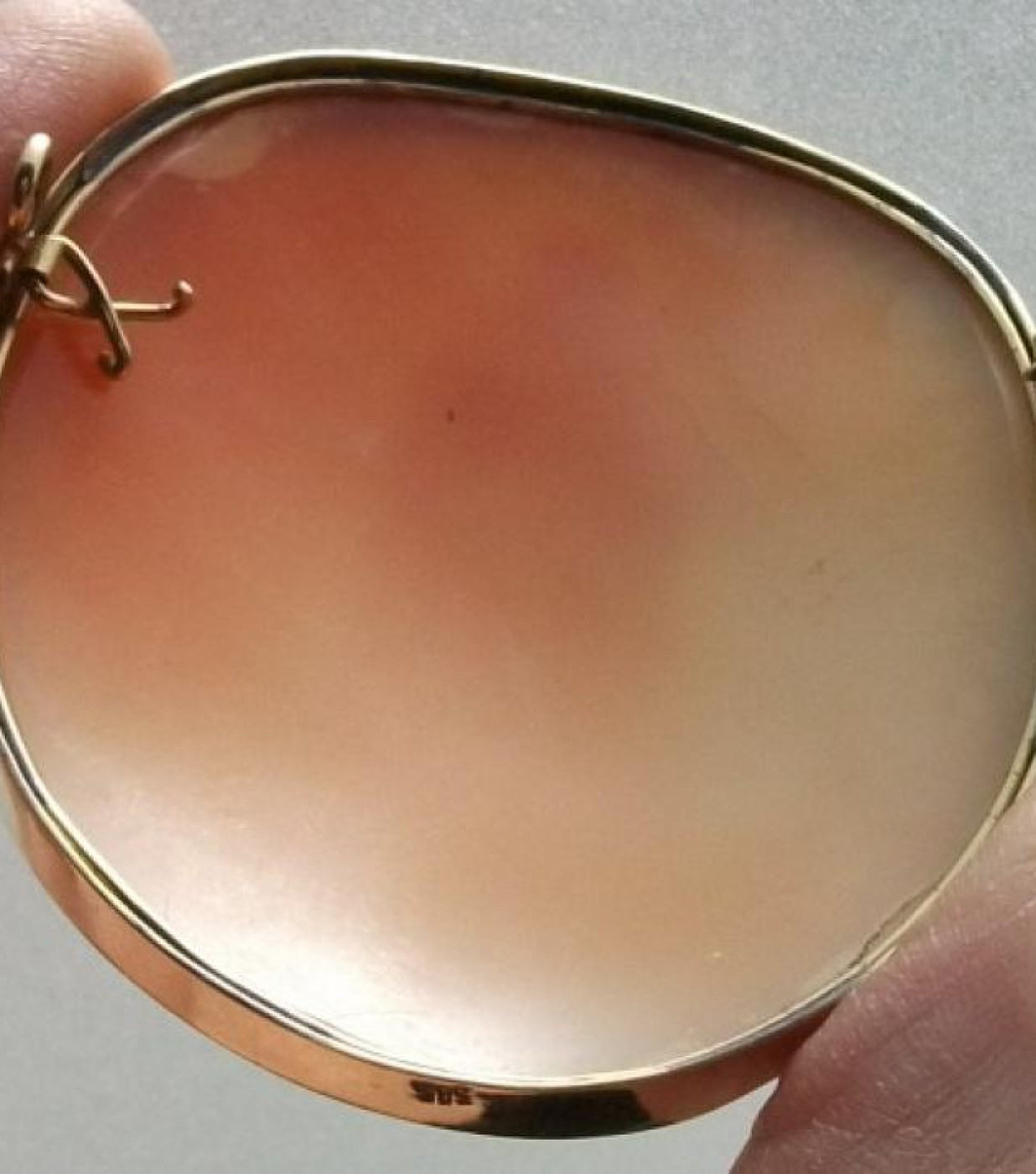 Museum Quality cameo depicting a rarest subject. It is not easy to find the Immaculate Conception as a cameo subject and this is the first time that I find one. Carving is more than superb and the quality of the shell is fantastic.  Look at her pretty and sweet face, from her face expression she appears just to be in extasy while praying.  Her dress  is wonderfully carved and nore her perfect carved foot squeezing the snake (who represents the devil in this case) coming out from the long dress. Pictures speak by themselves about this rarest cameo. This is another masterly carved cameo. A very desirable collectors piece, rare and museum quality cameo.
A bit of History:
The Immaculate Conception is, according to Roman Catholic Dogma, the conception of the Virgin Mary without any stain (macula in Latin) of original sin. Under this aspect Mary is sometimes called the Immaculata (the Immaculate One), particularly in artistic contexts. The dogma says that, from the first moment of her existence, she was preserved by God from the lack of sanctifying grace that afflicts mankind, and that she was instead filled with divine grace. It is further believed by Catholics that she lived a life completely free from sin. Her immaculate conception in the womb of her mother, through sexual intercourse, should not be confused with the doctrine of the virginal conception of her son Jesus, known as the Virgin Birth.The feast of the Immaculate Conception, celebrated on 8 December, was established as a universal feast in 1476 by Pope Sixtus IV. He did not define the doctrine as a dogma, thus leaving Roman Catholics free to believe in it or not without being accused of heresy; this freedom was reiterated by the Council of Trent. The existence of the feast was a strong indication of the Church's belief in the Immaculate Conception, even before its 19th century definition as a dogma.
The Immaculate Conception was solemnly defined as a dogma by Pope Pius IX in his constitution Ineffabilis Deus on 8 December 1854.
A great sign appeared in heaven: a woman clothed with the sun, the moon under her feet and on her head a crown of twelve stars. "From these verses of Revelation comes an image that for centuries was known as the" woman of 'Apocalypse' and that only 8 December 1854 officially took the name of the Immaculate Conception. In that year, the Vatican Basilica, the Bull Ineffabilis Deus, issued by Pope Pius IX proclaimed the Dogma of the Immaculate Conception. Devotion to Virgin is already widely distributed, the papal document renders it legally official. Over the centuries, the image of the Virgin has been the subject of representation by the most distinguished Italian and international artists. Even today, the European Union's blue flag dominate twelve stars, an obvious symbol of the Catholic Common array of relevant countries.
From the verses above lots of artists have been inspired to painting, sculpting or depicting the Immaculate conception. The triumph of the Immaculate in her images of splendor, depicted in the classic iconography of the Virgin, resting on a crescent moon, and crushes the serpent's head which represents the devil.