The First Whisper of Love By James Ronca 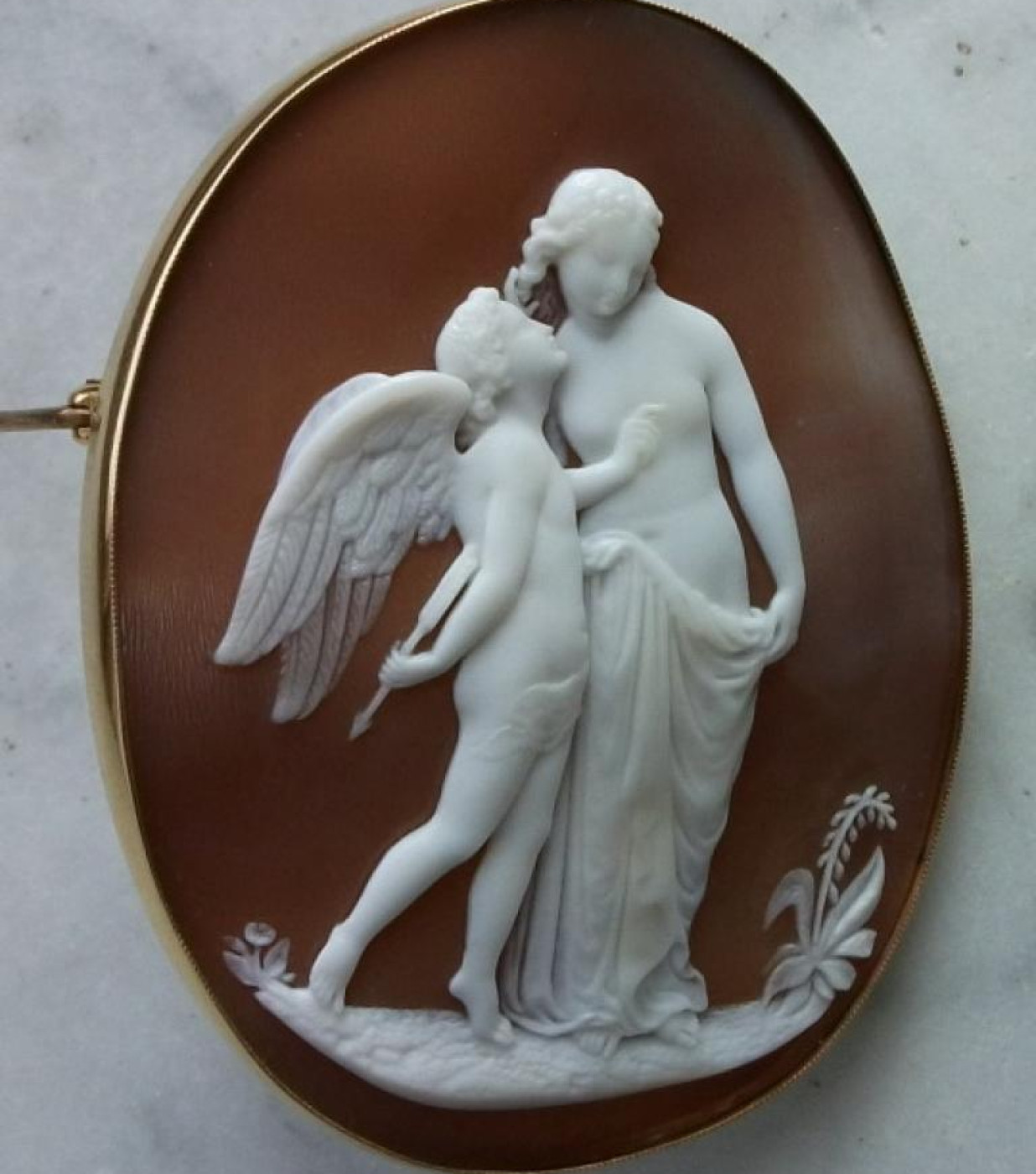 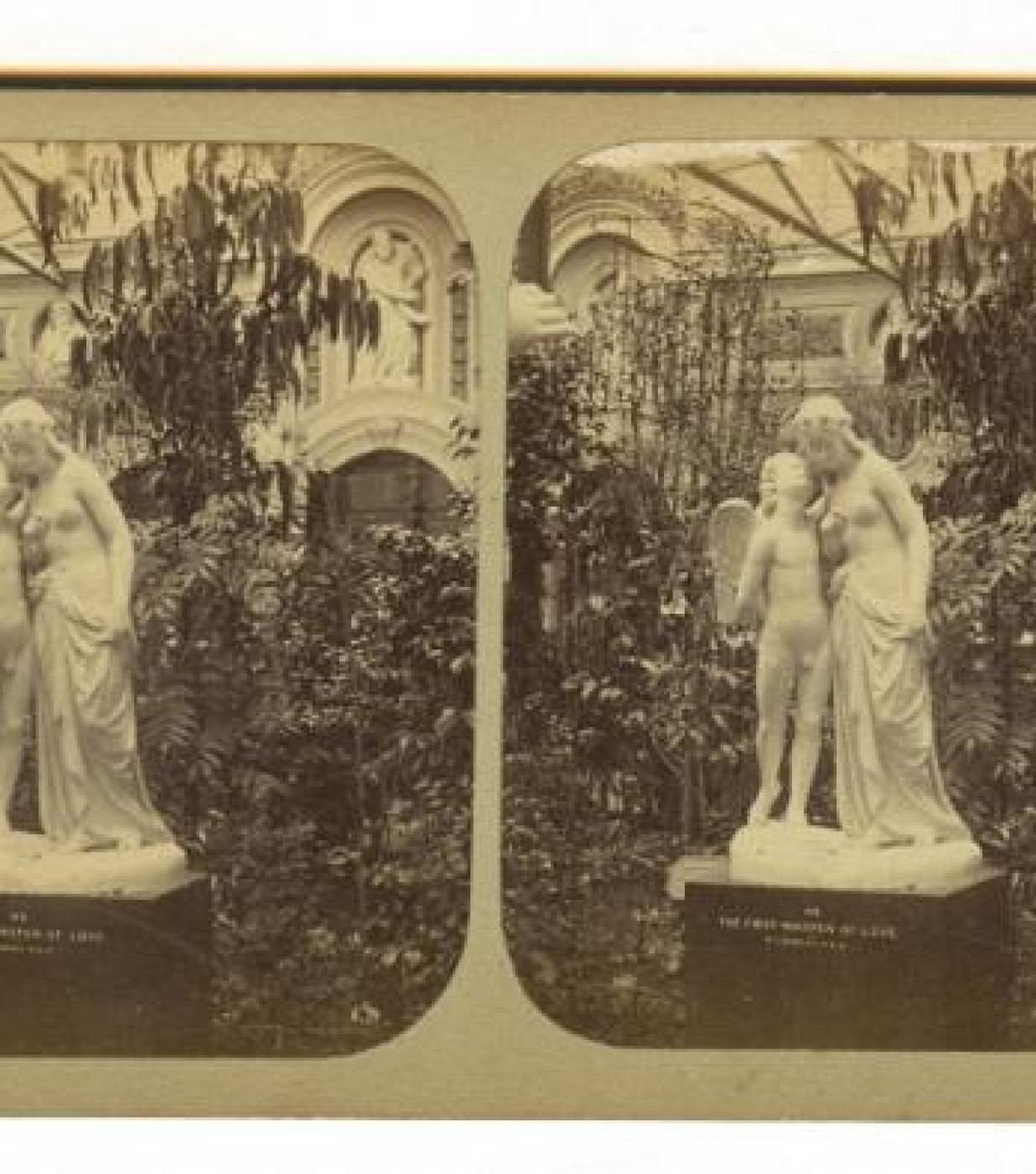 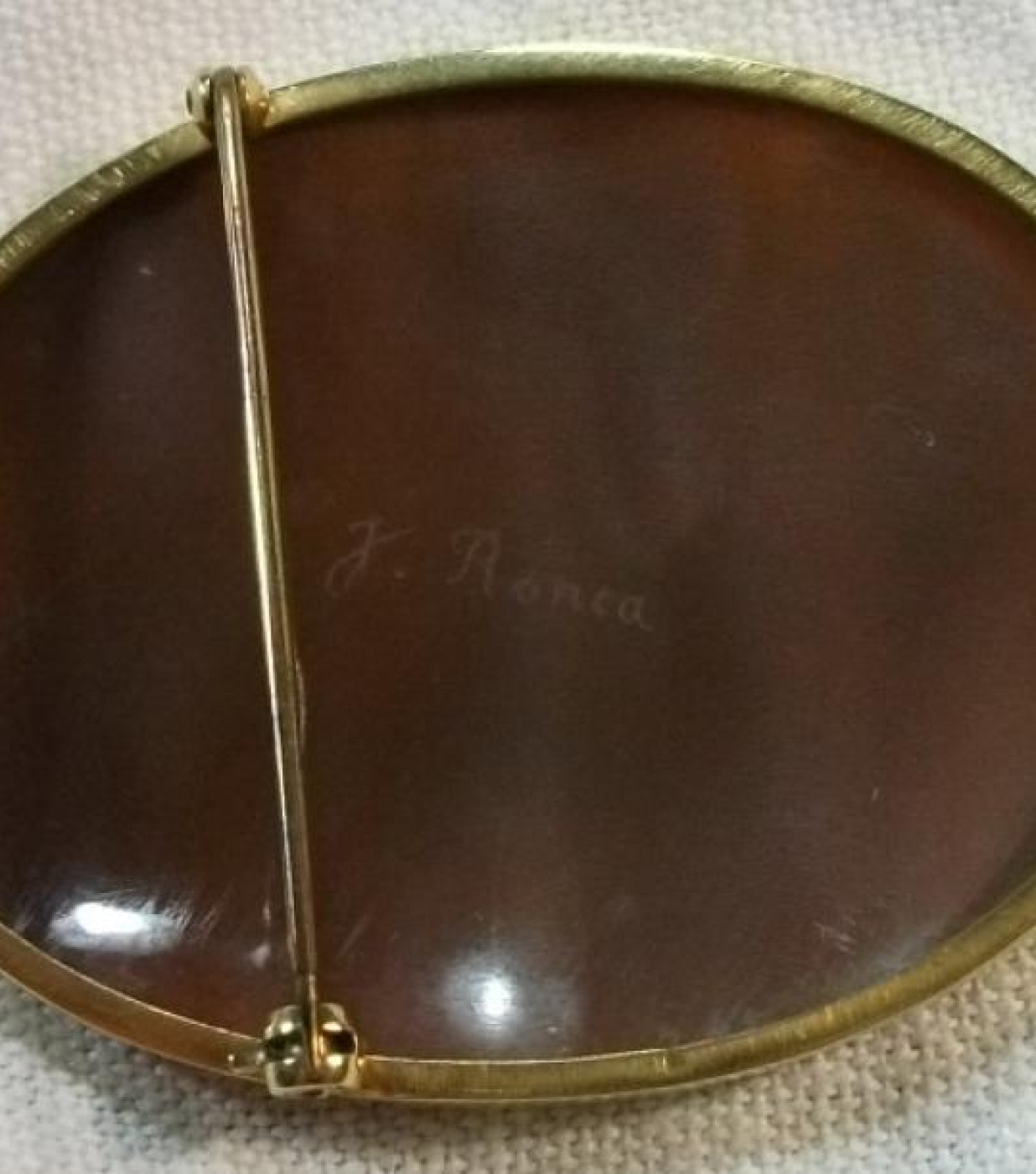 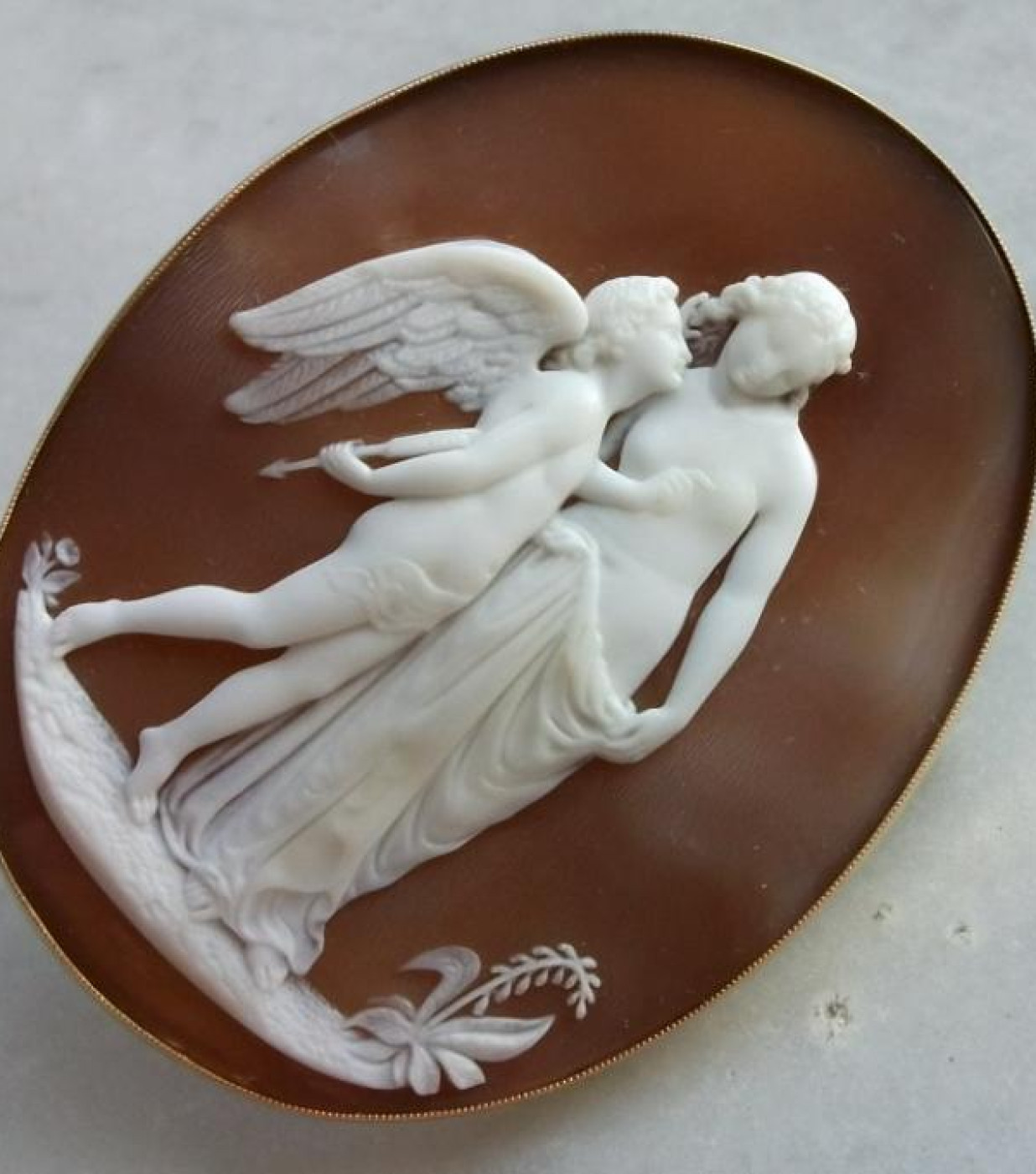 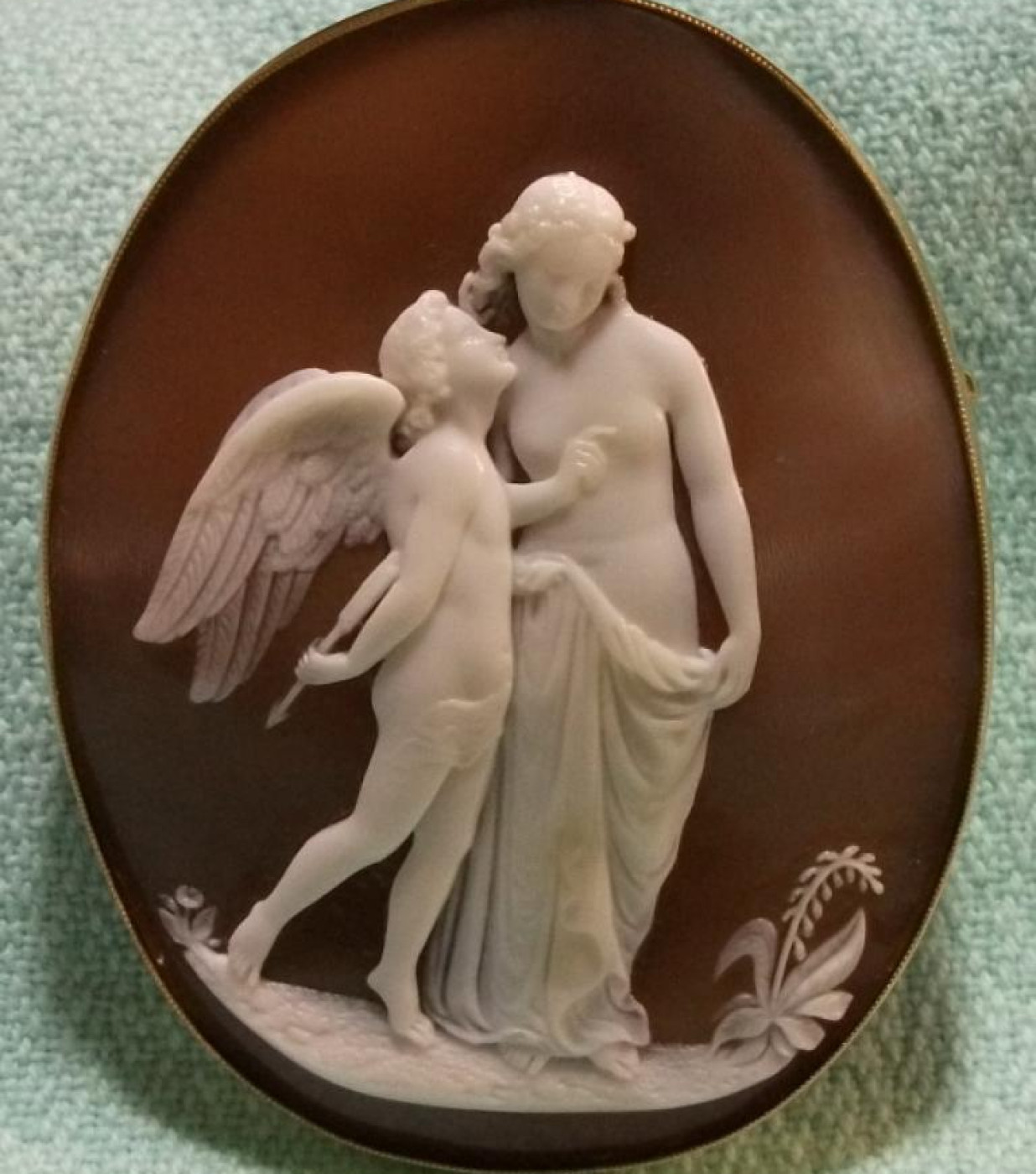 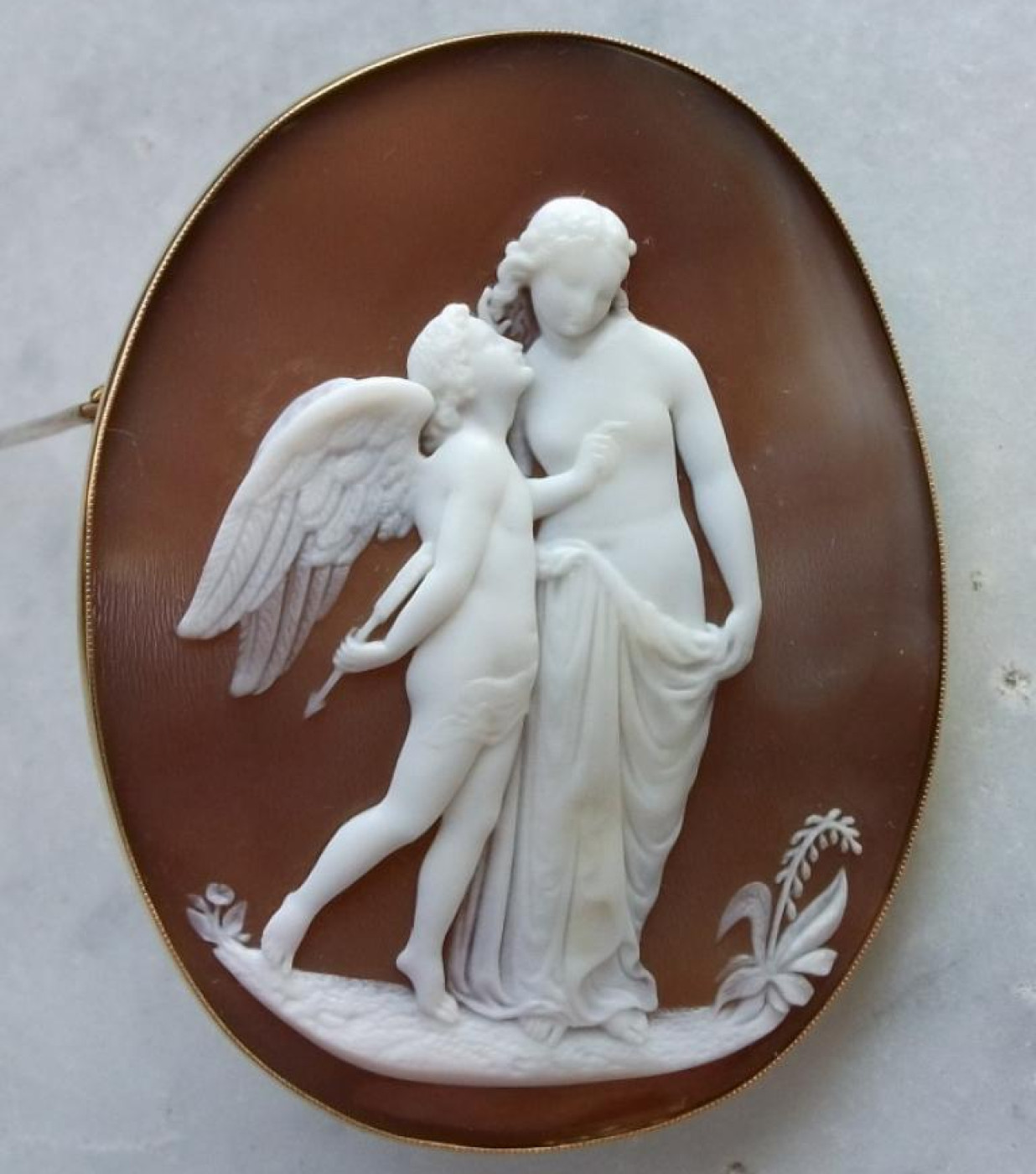 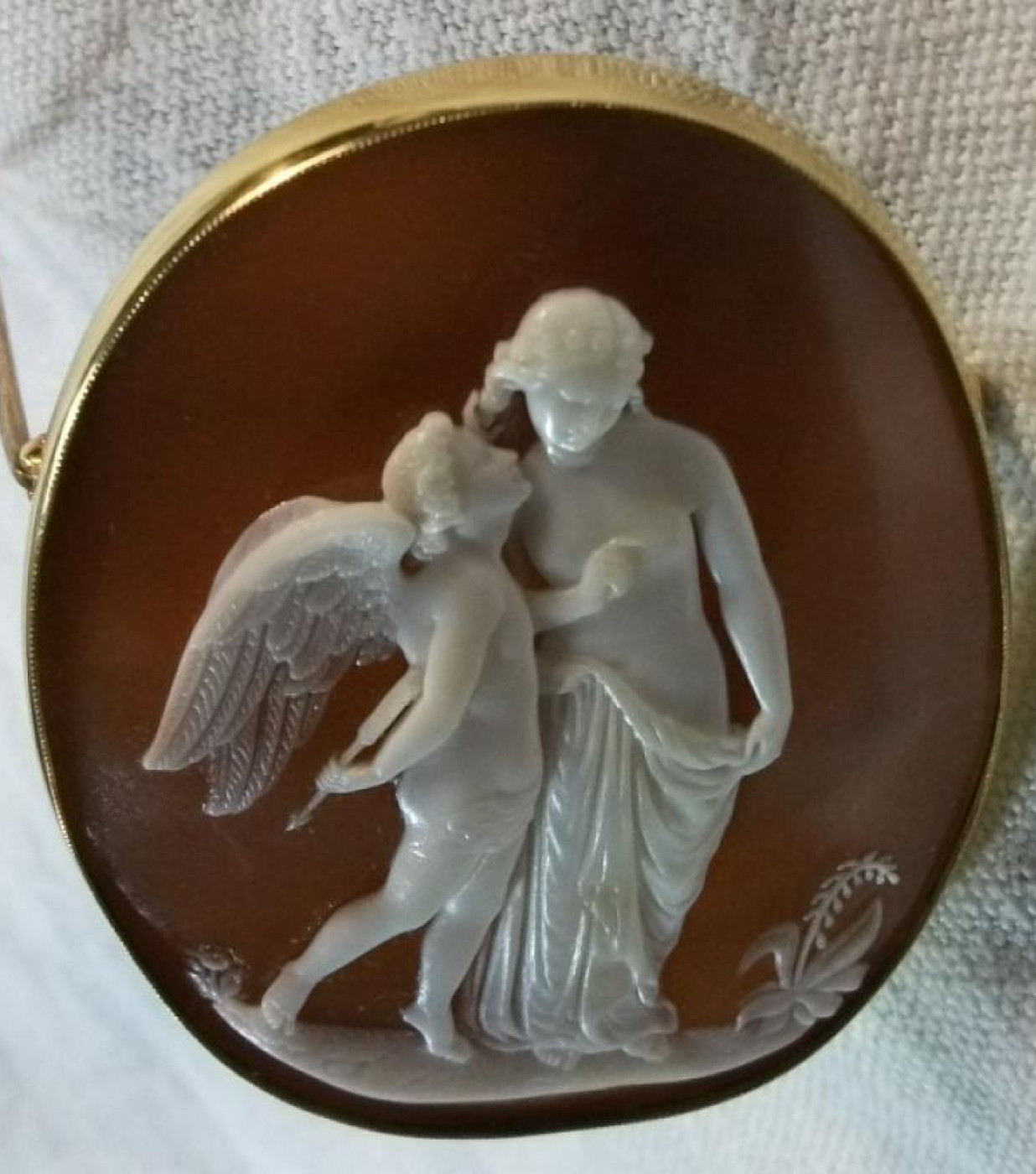 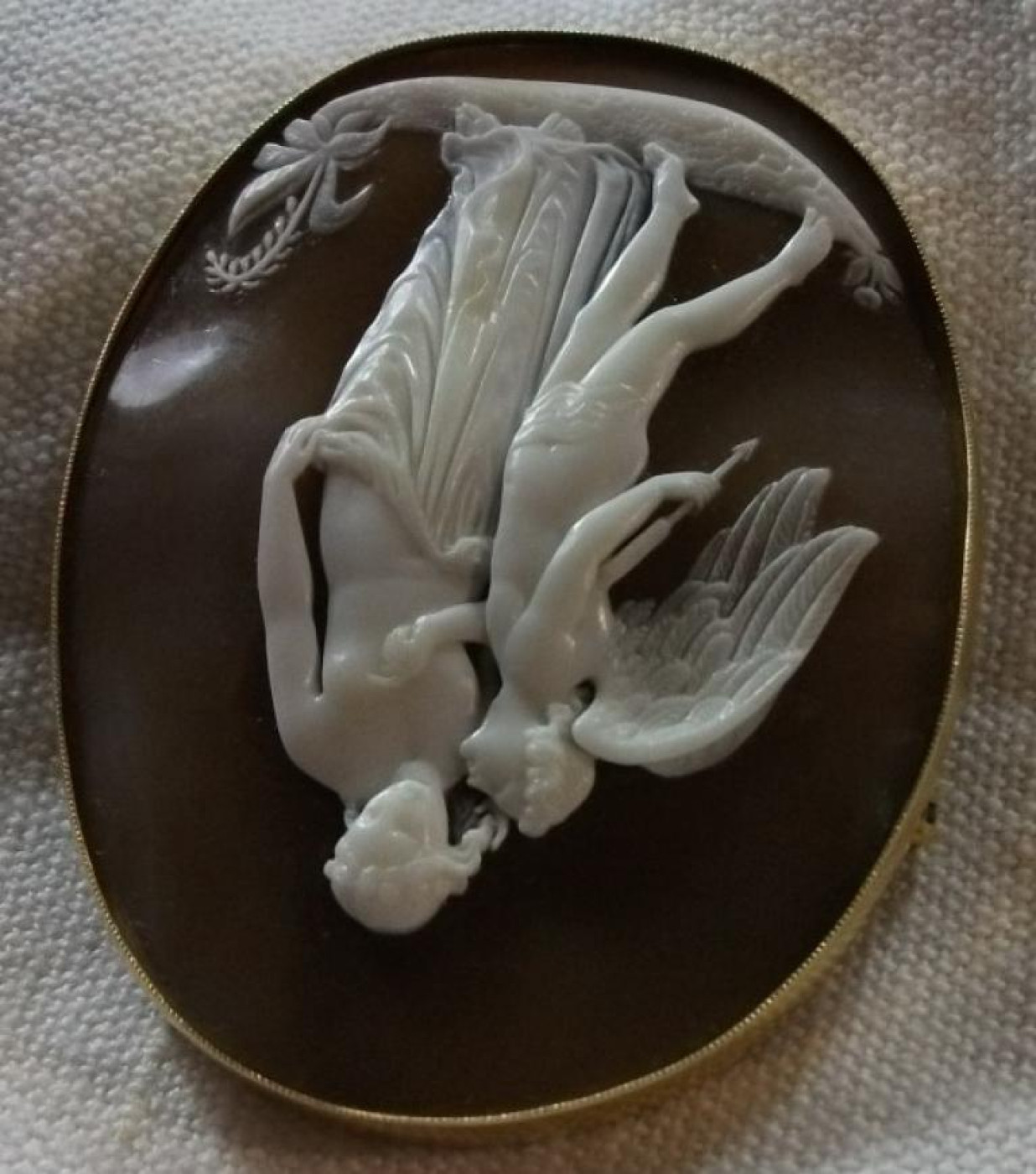 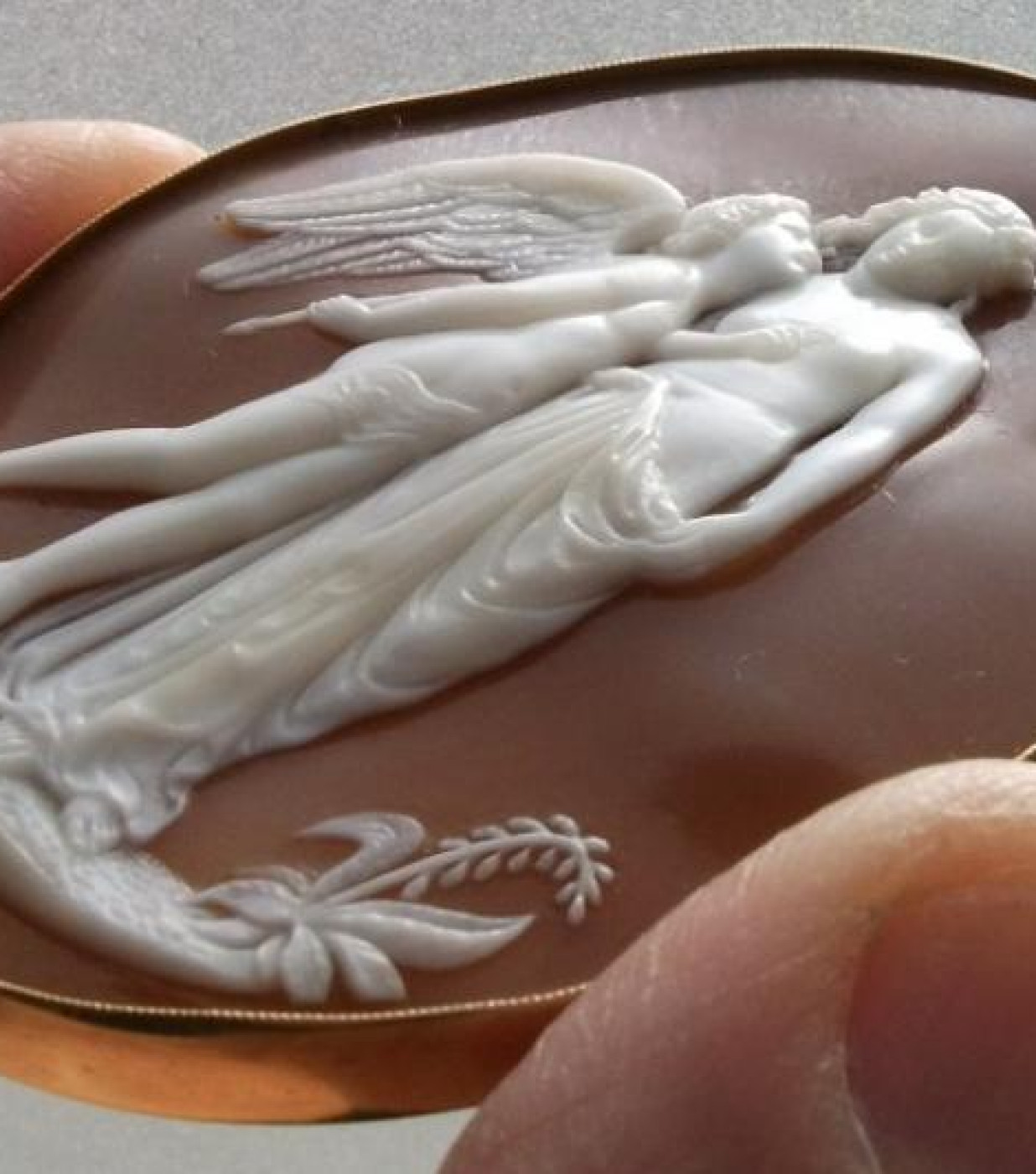 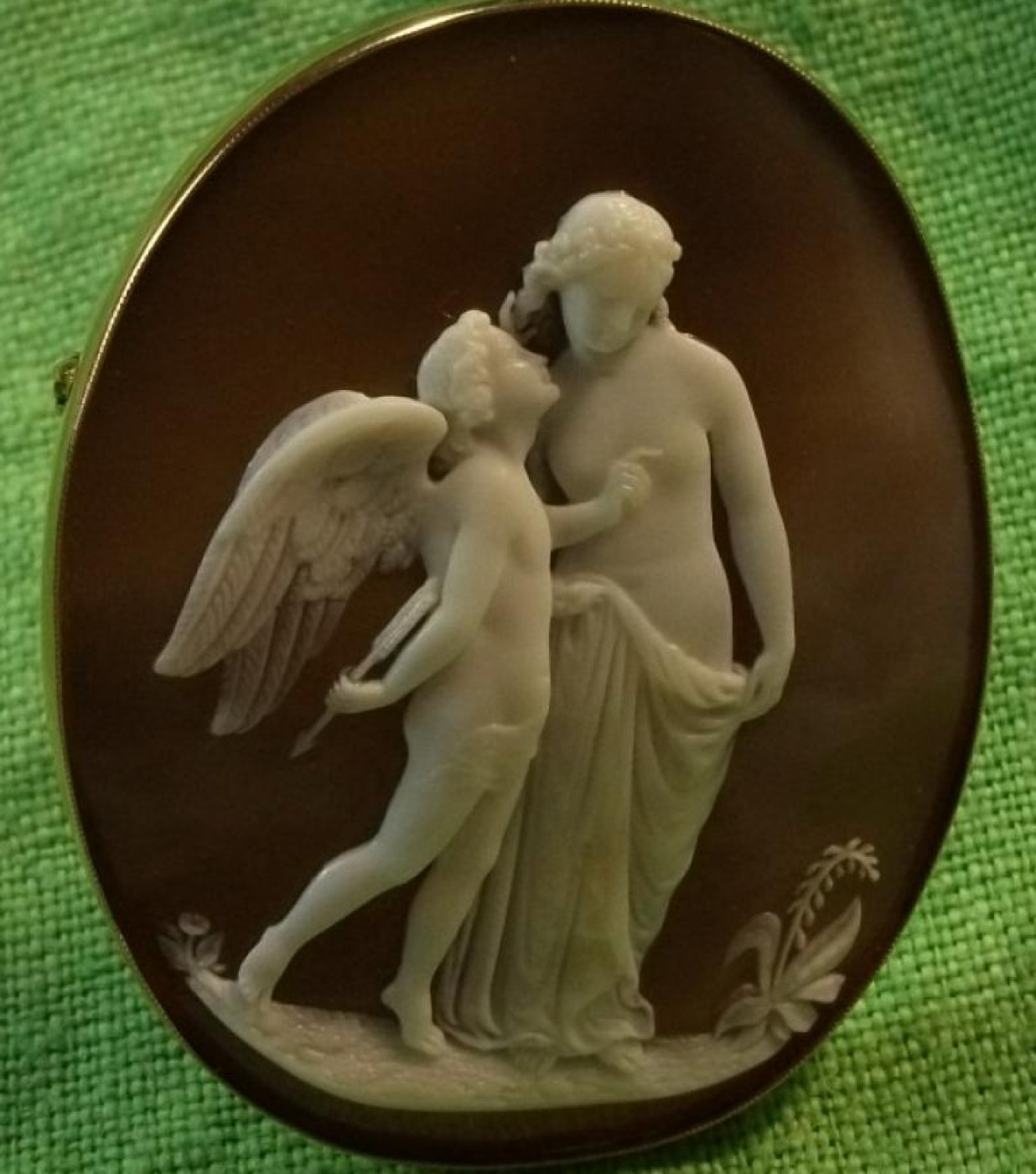 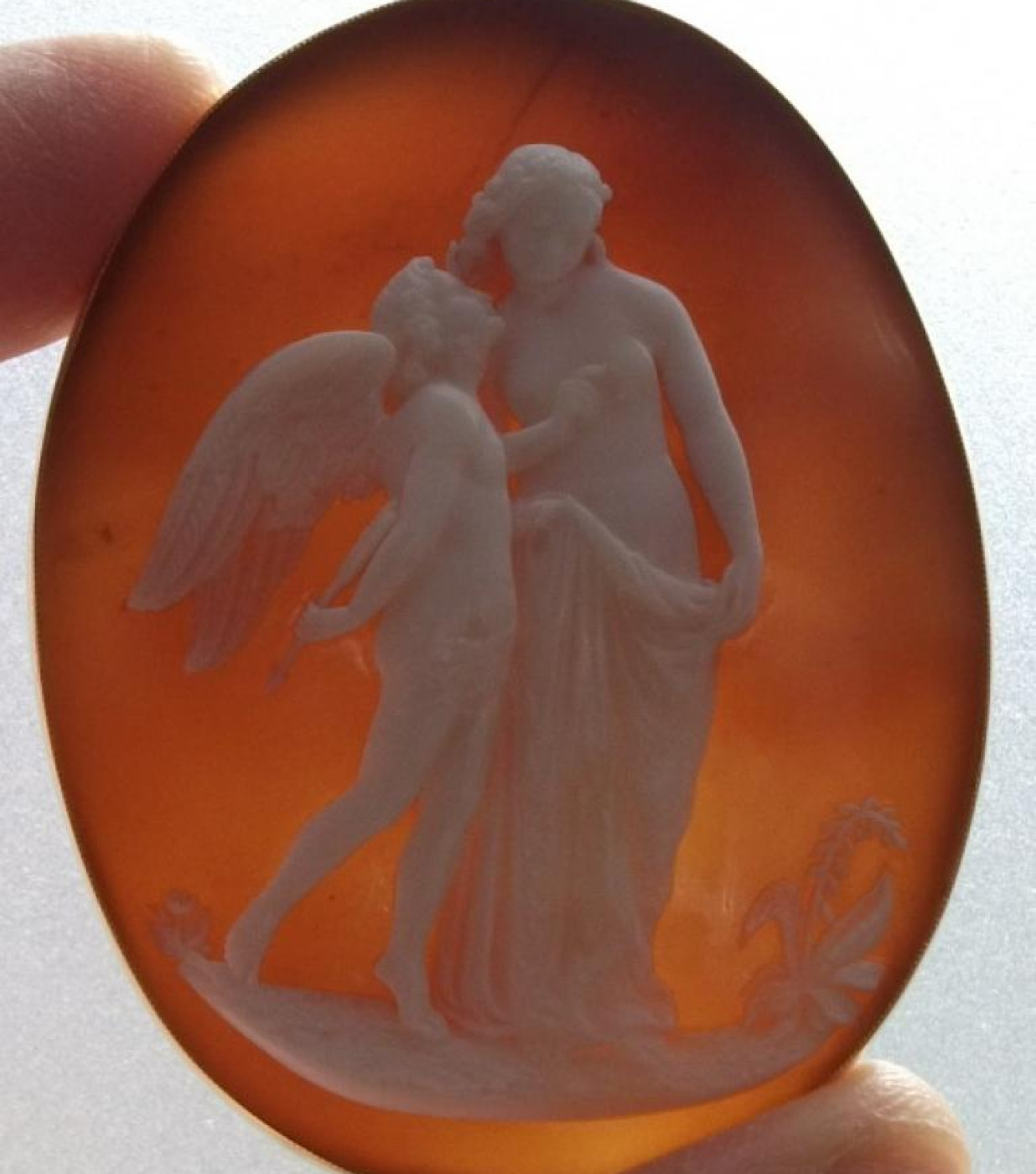 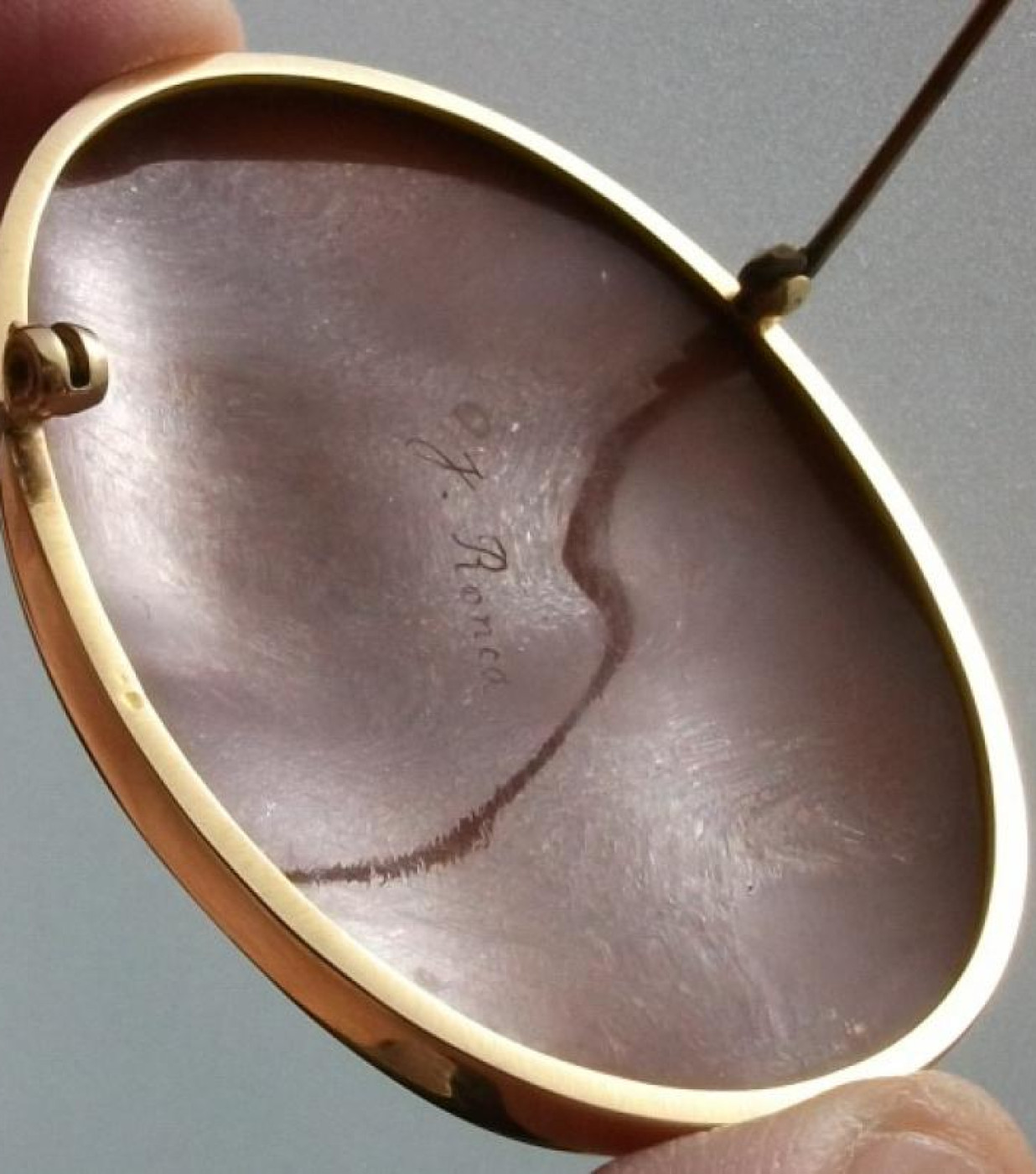 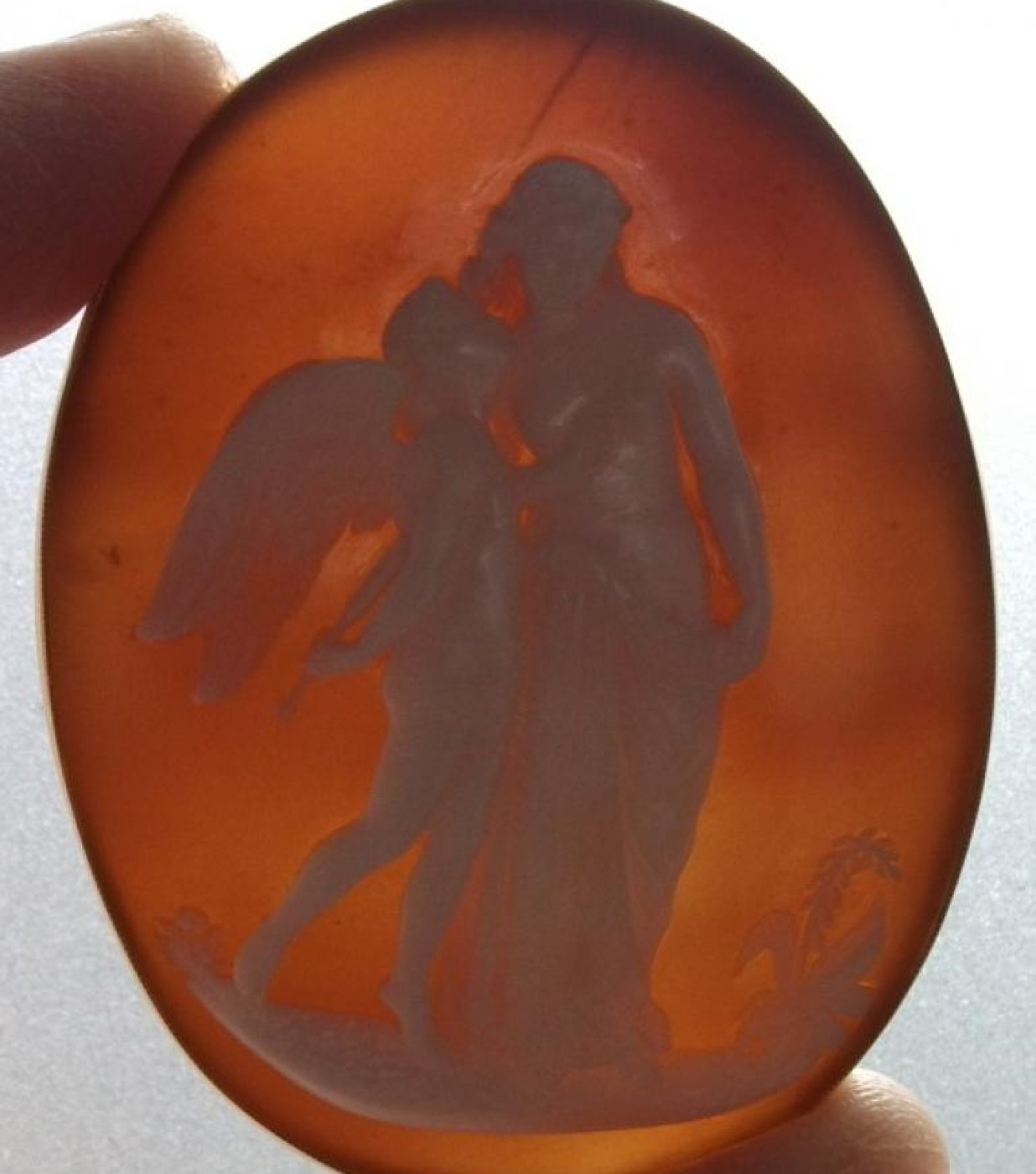 Museum Quality cameo of a rarest subject "The First Whisper of Love" after a sculpture by William Calder Marshall, a Scottish sculptor who made The First Whisper of Love in 1846 for the International Exhibition of 1851 in London. (see original pictures below). The carving is more than perfect in every detail.  The delicacy of this piece is truly amazing.  You can really see love in the expression of the two lovers. This is an unusual  depiction of Cupid and Psyche. Her face is so sweet and she appears just to be shy while Cupid whispers love words. Note the arrow that Cupid hides behind himself, it gives me the impression that he's waiting the right moment to shoot it and makes Psyche falls in love with him. This cameo gives a lot of emotions to anyone who looks at it. Again it is signed by one of the most famous carver of England, James Ronca, who learnt the art of the carving from his father, an Italian who lived in the Italian part of Switzerland and that moved to London. James Ronca was born there and became one of the cameos carver to the Queen Victoria. A rarest subject masterly executed.  The frame is simple and elegant. This subject is amazing, everything is so realistic.   This is one of most beautiful cameos I have ever seen, the pictures speak by themselves. This is another masterly carved cameo. A very desirable collectors piece, rare and museum quality cameo.
A bit of History:

William Calder Marshall (18 March 1813 – 16 June 1894) was a Scottish sculptor. Born in Edinburgh, he attended the Royal High School and Edinburgh University before enrolling at the Royal Academy school in London in 1834, where he won the silver medal. In 1836 he went to Rome to pursue his study of classical sculpture, staying for two years. An exhibition at Westminster Hall in 1844 proved to be the turning point of his career, leading to many commissions for public monuments to decorate the Houses of Parliament, Westminster Abbey, St. Paul's Cathedral, and the Albert Memorial. He was the most prolific exhibitor of statuary at the Royal Academy in the Victorian age.