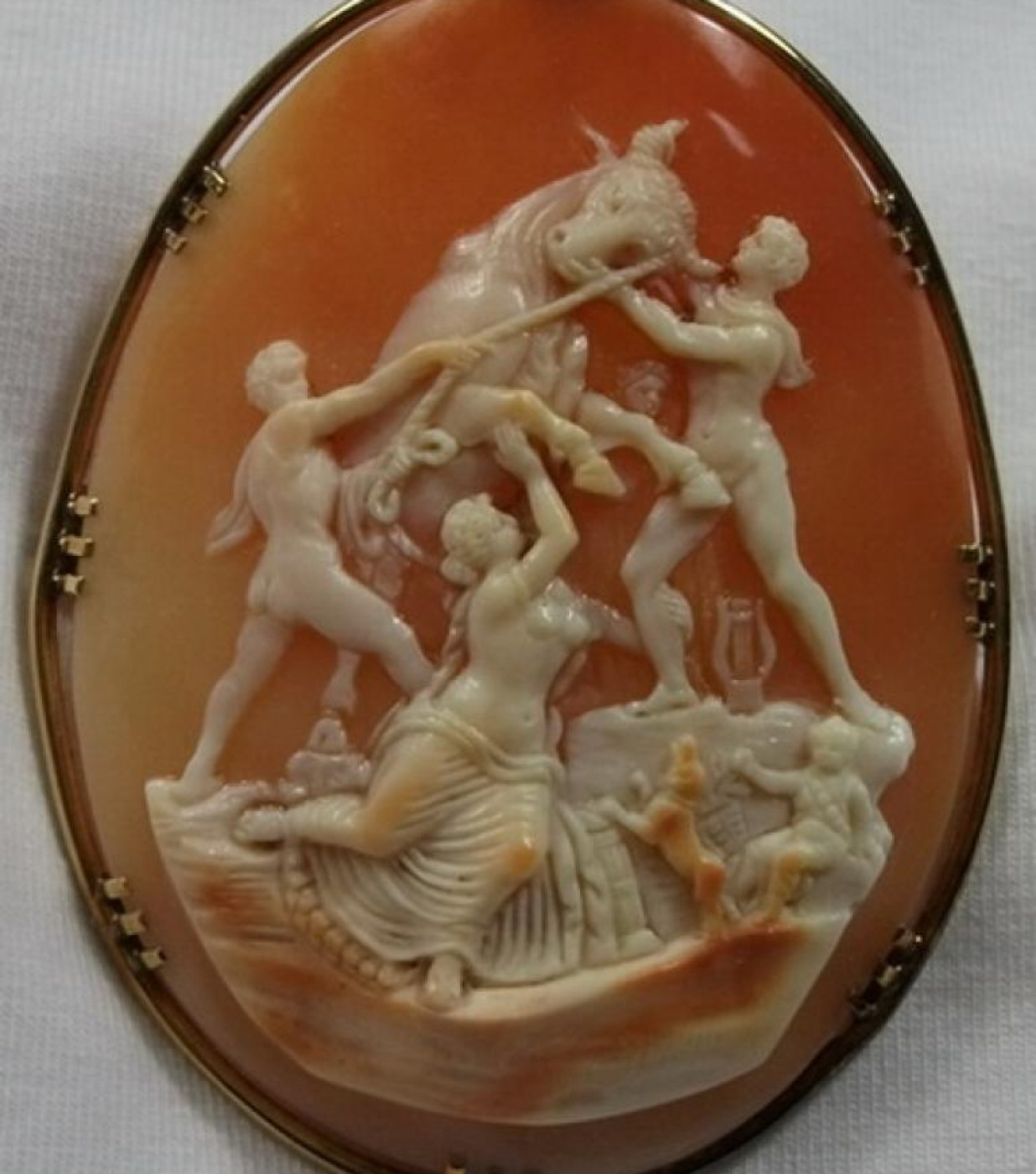 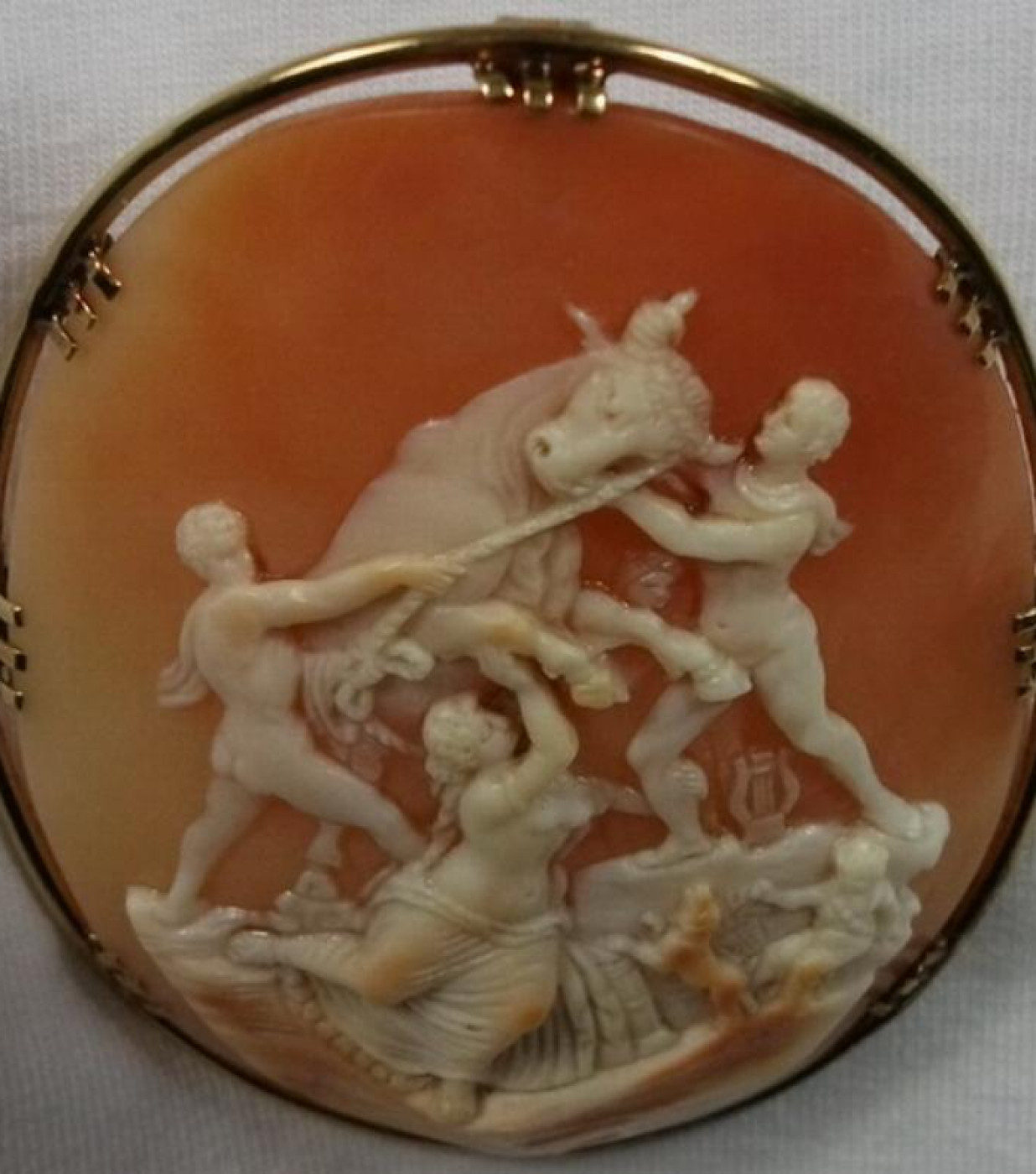 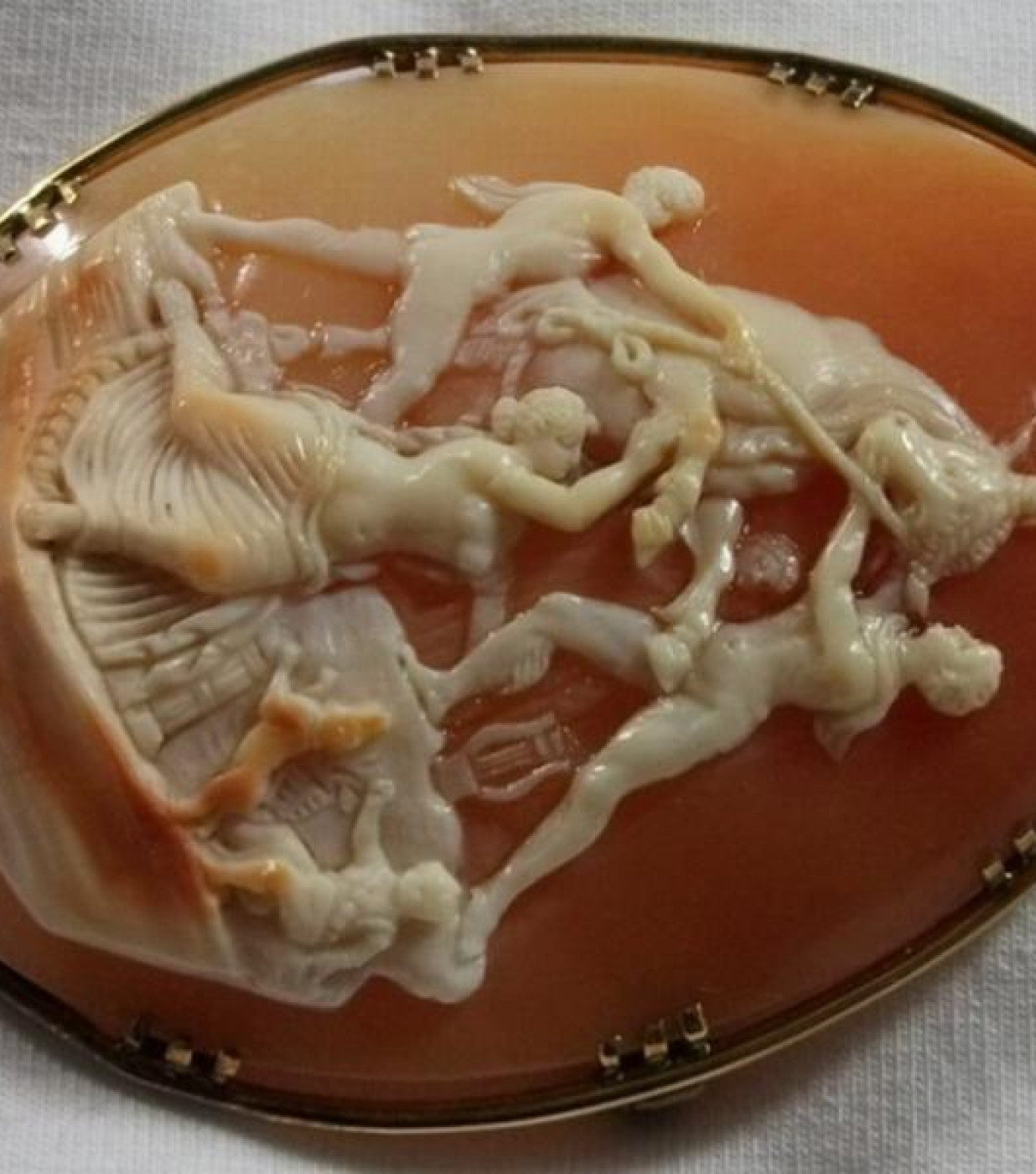 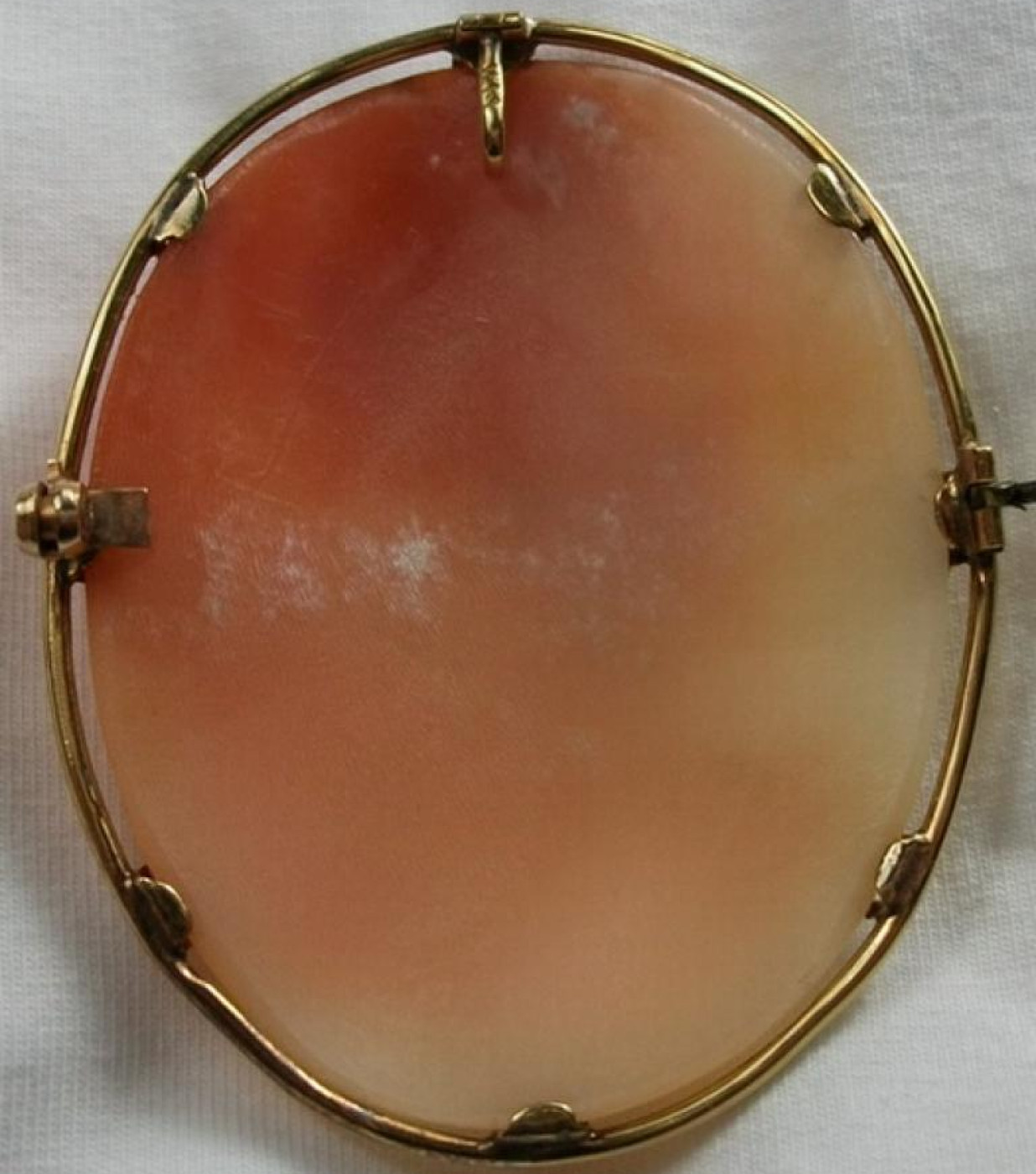 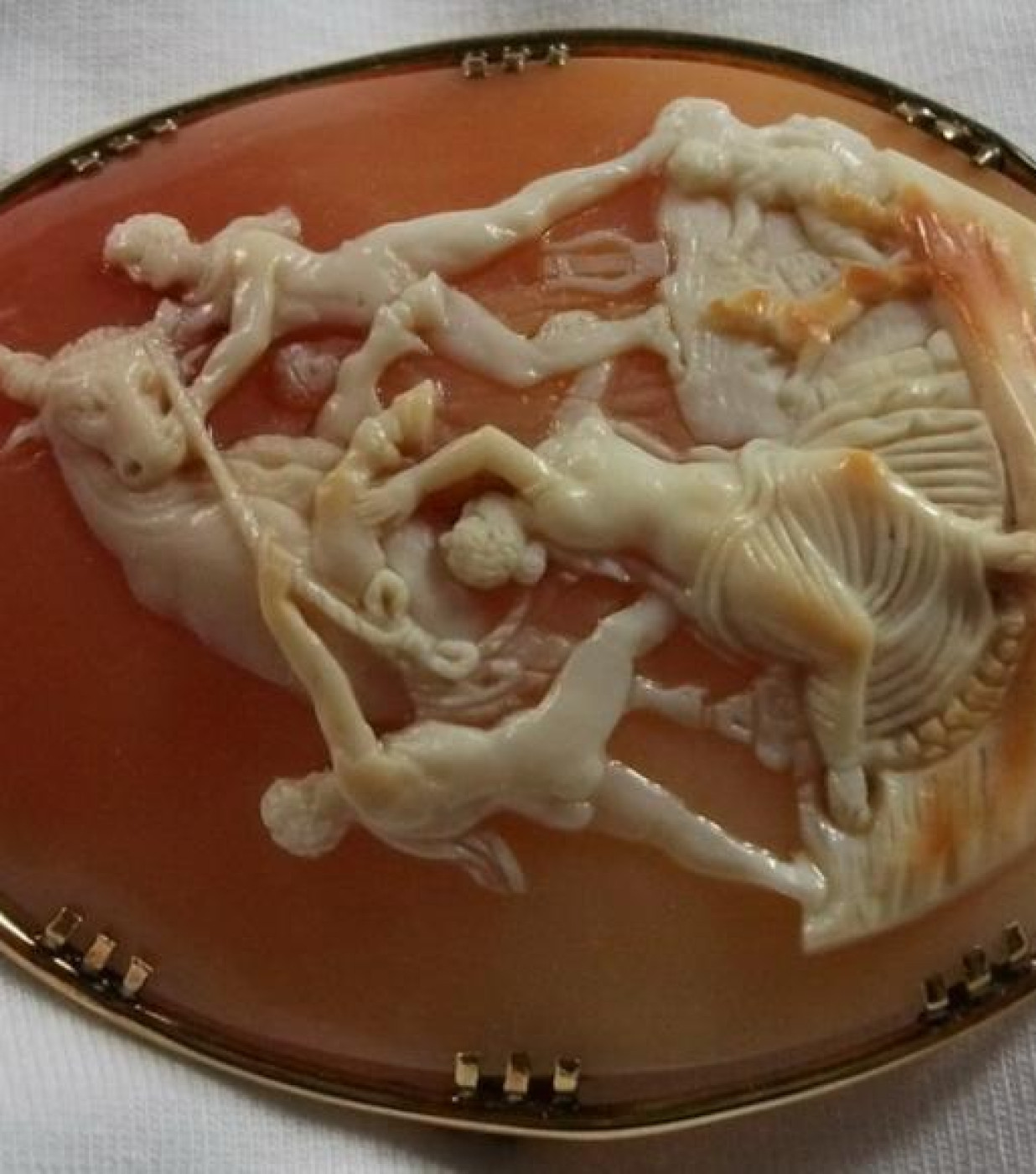 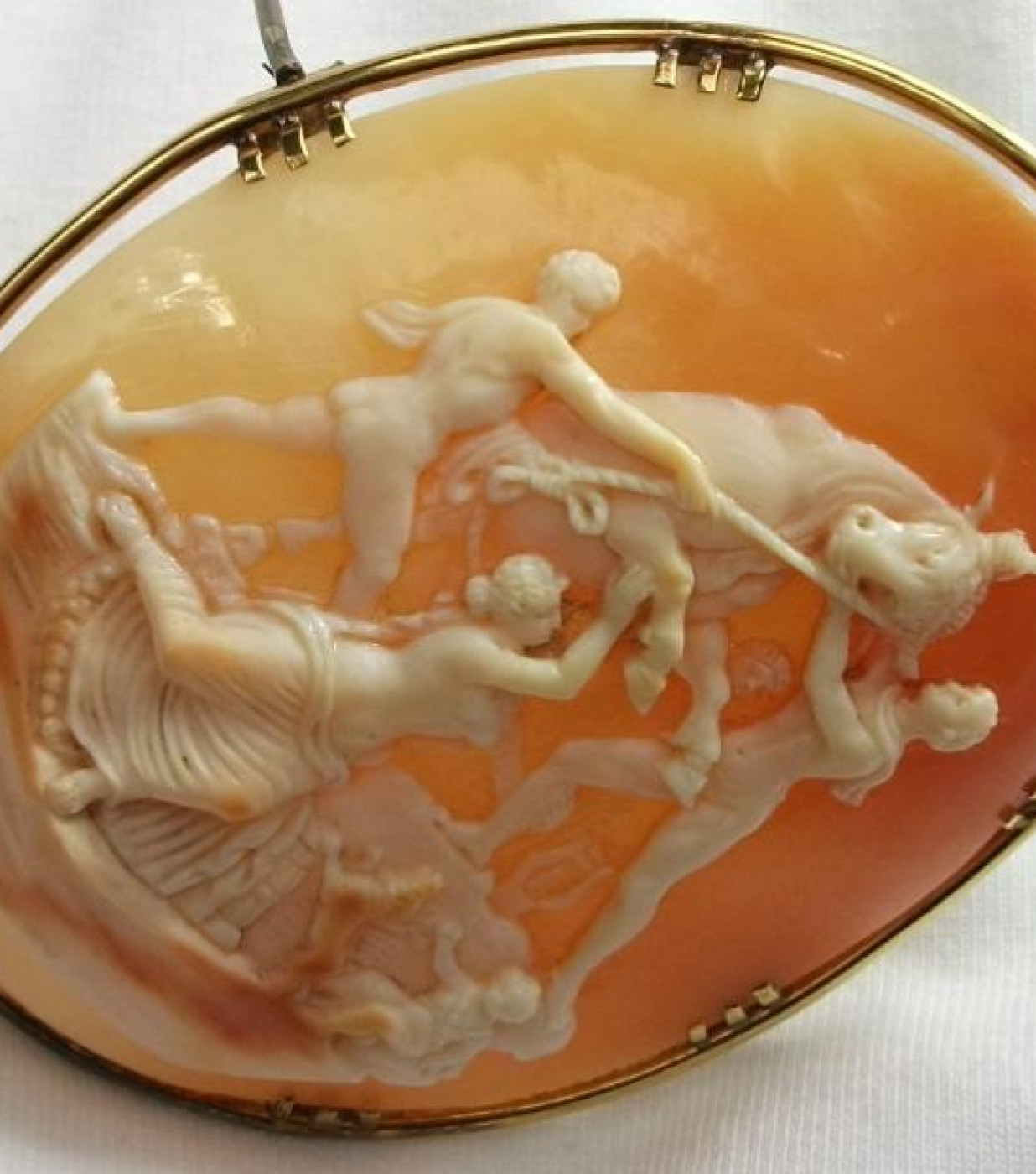 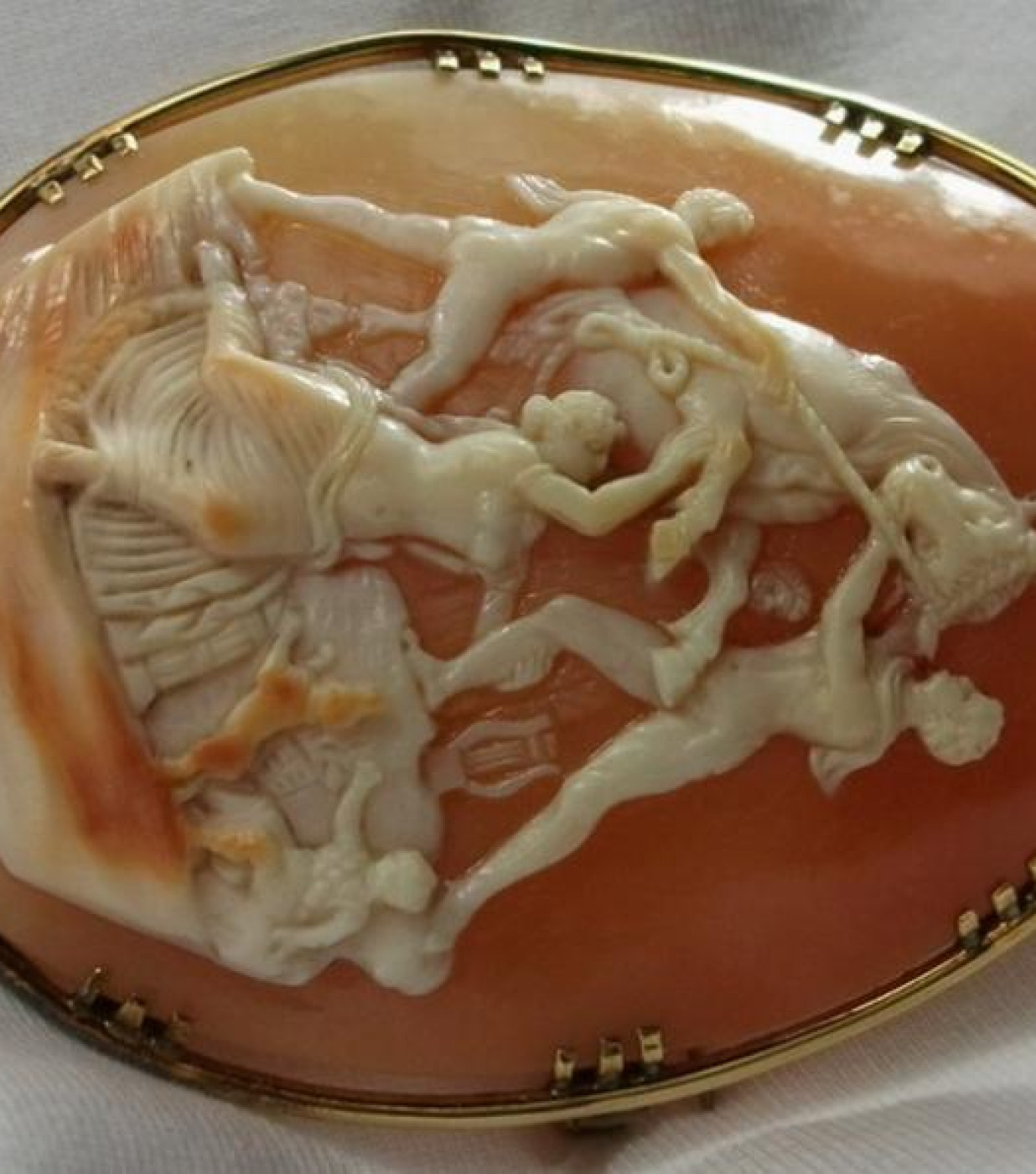 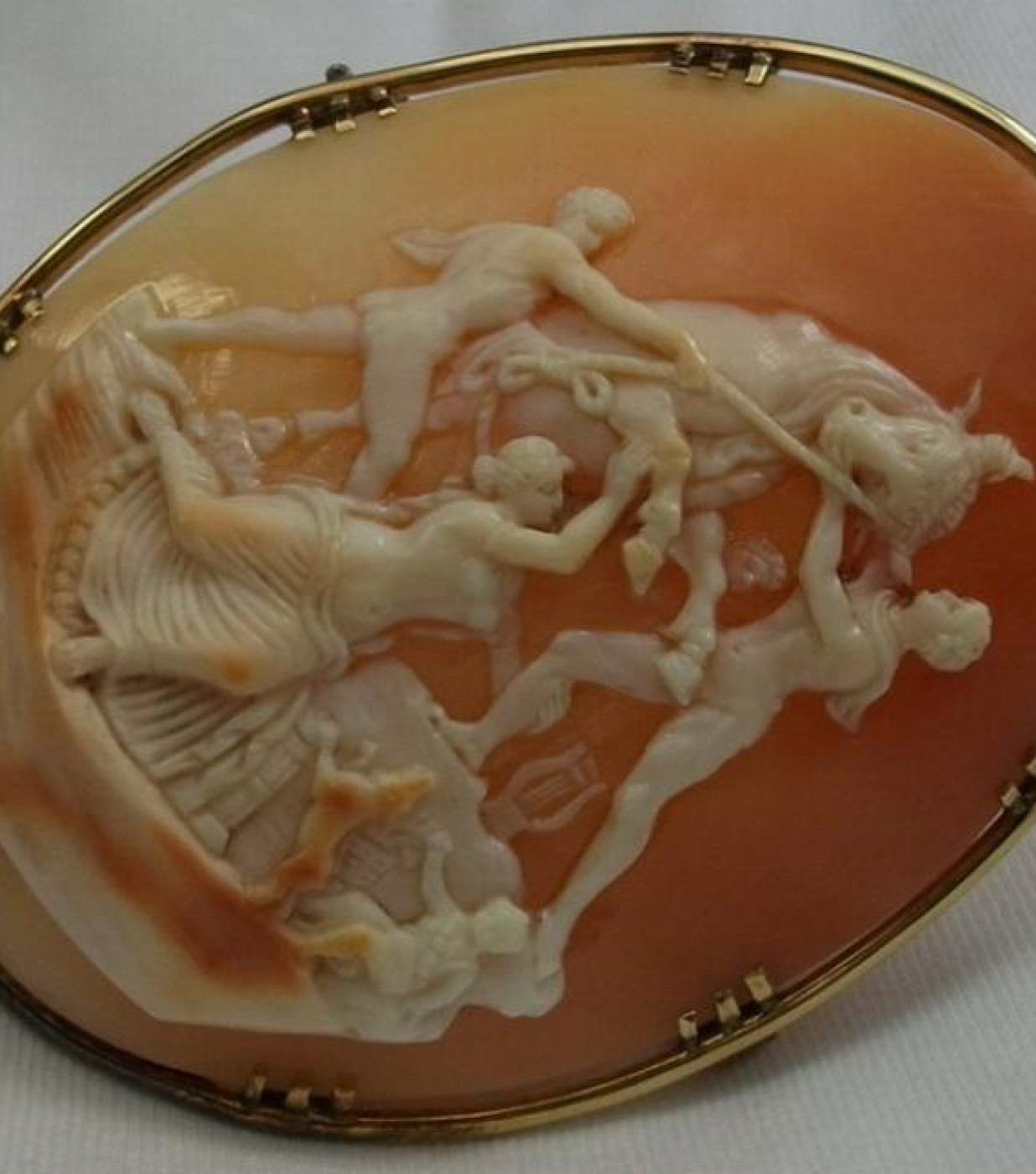 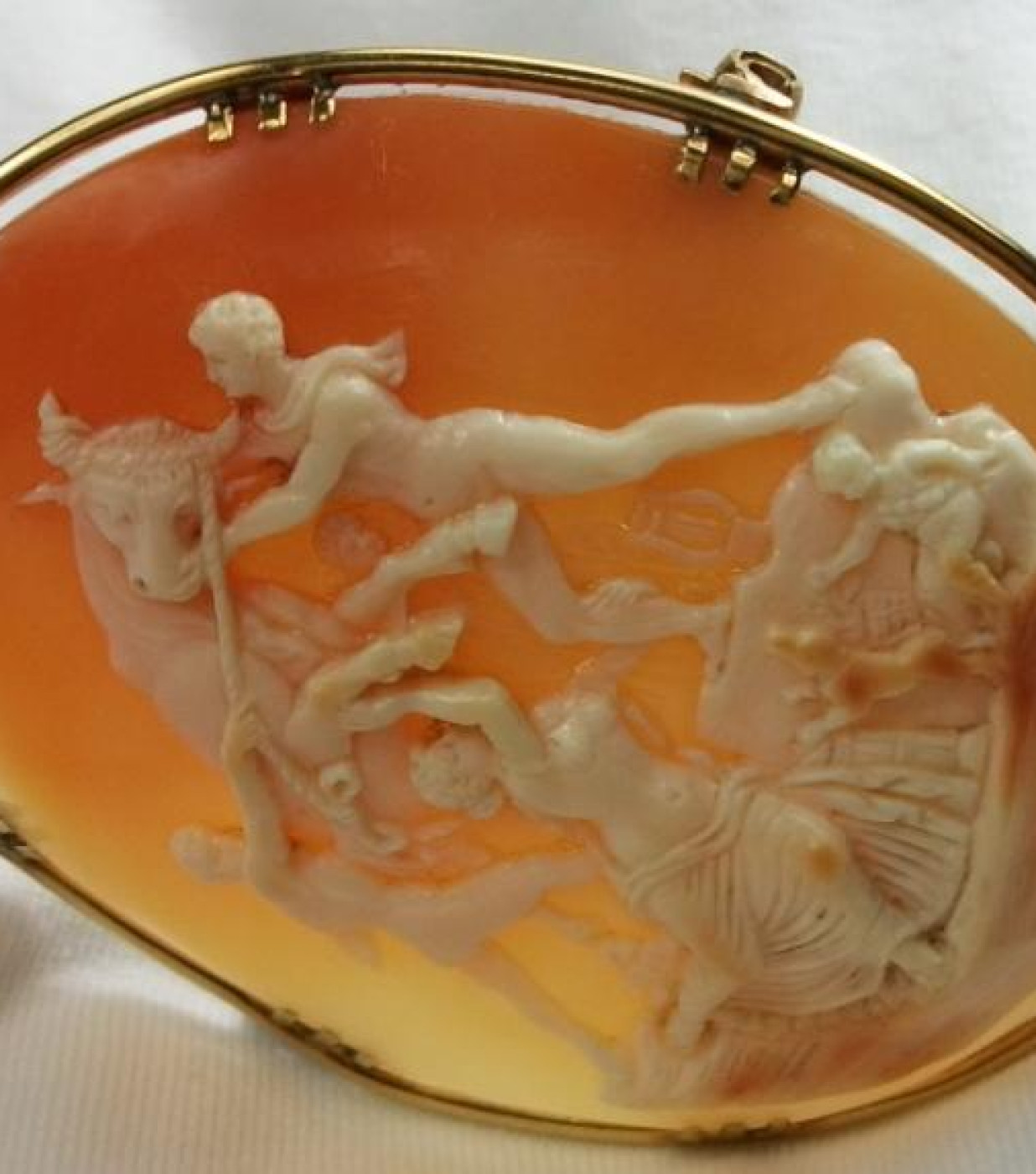 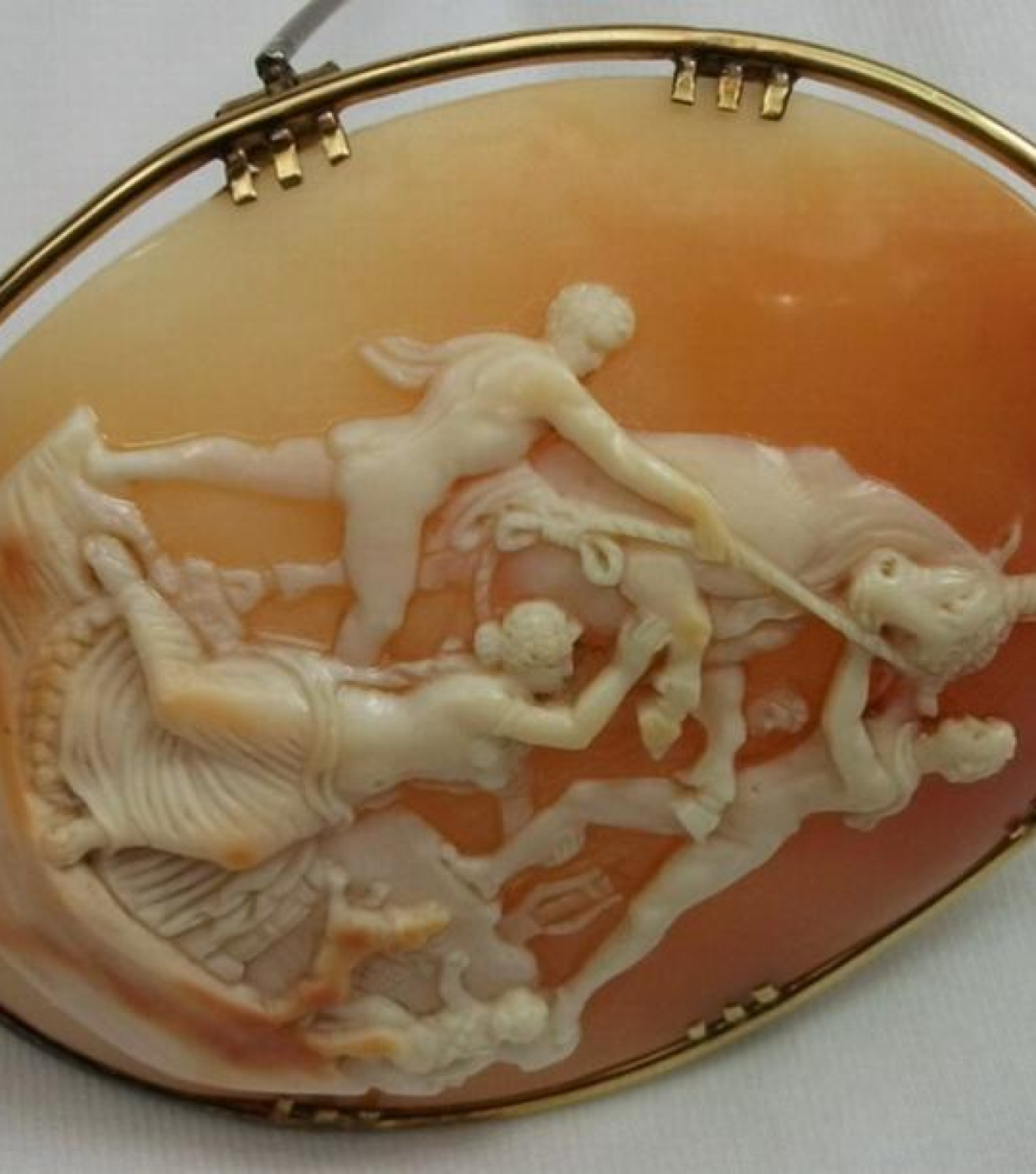 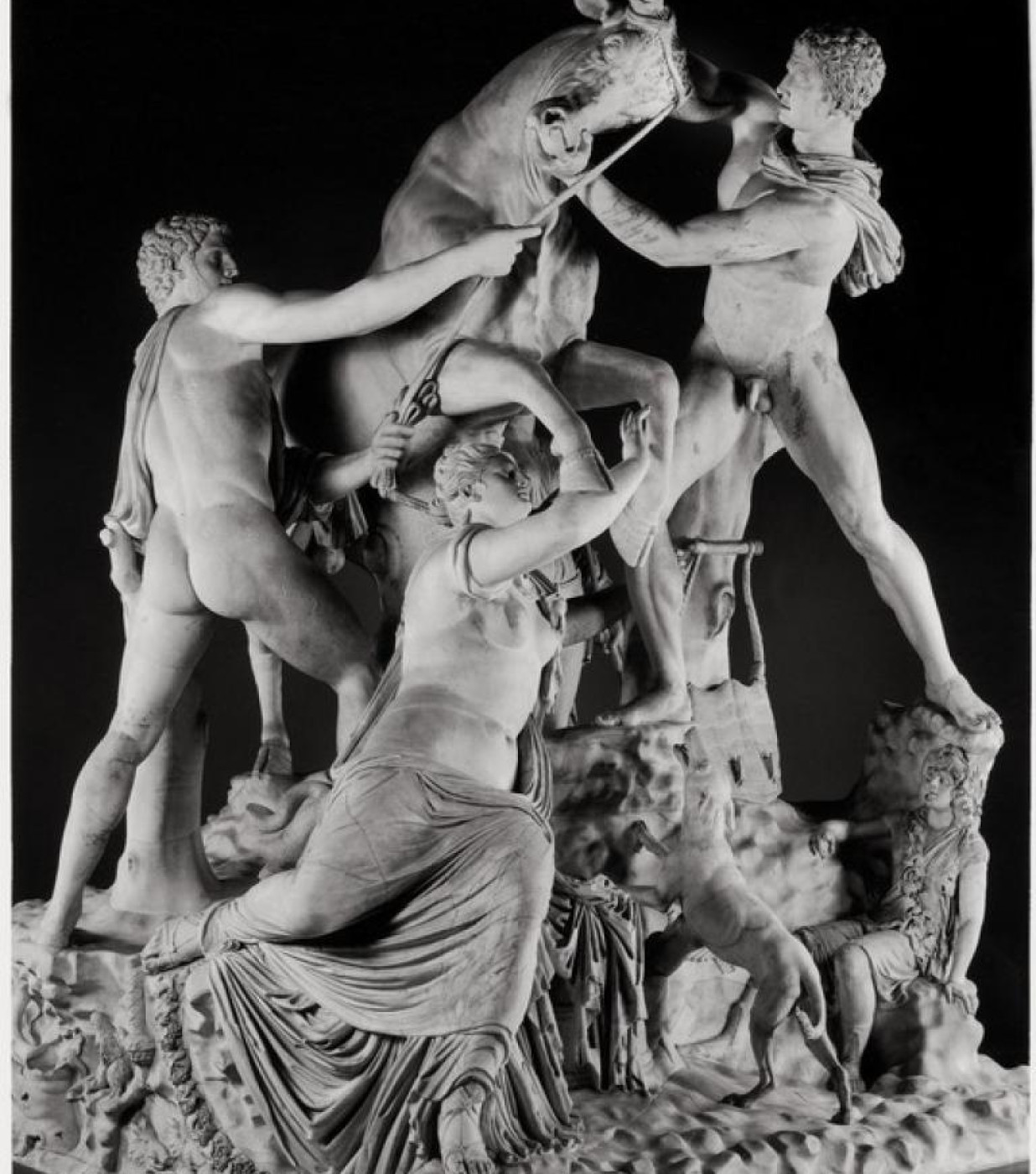 Highest Museum Quality cameo depicting a rarest subject, the Toro Farnese (the Farnese Bull). The Farnese Bull is a massive sculpture attributed to the Rhodian artists Apollonius of Tralles and his brother Tauriscus. We know this thanks to the writings of Pliny the Elder. He tells us it was commissioned at the end of the second century B.C. and carved from just one whole block of marble. It was imported from Rhodes, as part of the incredible collection of artwork and sculptures owned by Asinius Pollio, a Roman politician who lived during the years between the Republic and the Principate. It is widely considered the largest single sculpture ever recovered from antiquity. This colossal marble sculptural group represents the myth of Dirce (read the story below).  The death of Dirce is depicted in a marble statue, 1st Century AD Roman Copy of a 2nd century BC Hellenistic Greek original, known as the Farnese Bull, now in the collections of the National Archaeological Museum in Naples. The colossal piece was first excavated in the 16th century in the Baths of Caracalla.  All the details of the sculpture are wonderfully carved in this exceptional, huge and rare cameo. Look at how the muscles of the two men are carved, look at the bull, it is magnificent. This cameo is a real work of art.  The carver has perfectly copied every detail of the massive sculpture (see picture below).  You can really see the strong effort that the men are doing to hold the bull. Dirce is perfectly carved while she's trying, just like in the sculpture, to not to be tied by the bull. Isn't this cameo incredible? A piece of history.  The frame is simple and elegant, just right to evidence all the beauty of this stunning piece. This subject is more than amazing.  This is one of most beautiful cameos I have ever seen, the pictures speak by themselves. This is another masterly carved cameo. A very desirable collectors piece, rare and museum quality cameo.
A bit of History:

Dirce was tied to a wild bull by the sons of Antiope, Zeto and Amphion, who wanted to punish her for the ill-treatment inflicted on their mother, first wife of Lykos, King of Thebes. It was found in 1546 in the Baths of Caracalla in Rome during excavations commissioned by Pope Paul III in the hope of finding ancient sculptures to adorn his Roman residence. It is now located at the Museo Archeologico Nazionale Napoli in Naples. Dirce (meaning "double" or "cleft") was the wife of Lycus in Greek mythology, and aunt to Antiope whom Zeus impregnated. Antiope fled in shame to King Epopeus of Sicyon, but was brought back by Lycus through force, giving birth to the twins Amphion and Zethus on the way. Dirce hated Antiope, and treated her cruelly after Lycus gave Antiope to her; until Antiope, in time, escaped. In Euripides' play Antiope, Antiope flees back to the cave where Amphion and Zethus were born, now living there as young men. They disbelieve her claim to be their mother and refuse her pleas for sanctuary, but when Dirce comes to find Antiope and orders her to be killed, the twins are convinced by the shepherd who raised them that Antiope is their mother. They kill Dirce by tying her to the horns of a bull. Dirce was devoted to the god Dionysus. He caused a spring to flow where she died, either at Mount Cithaeron or at Thebes, and it was a local tradition for the outgoing Theban hipparch to swear in his successor at her tomb.