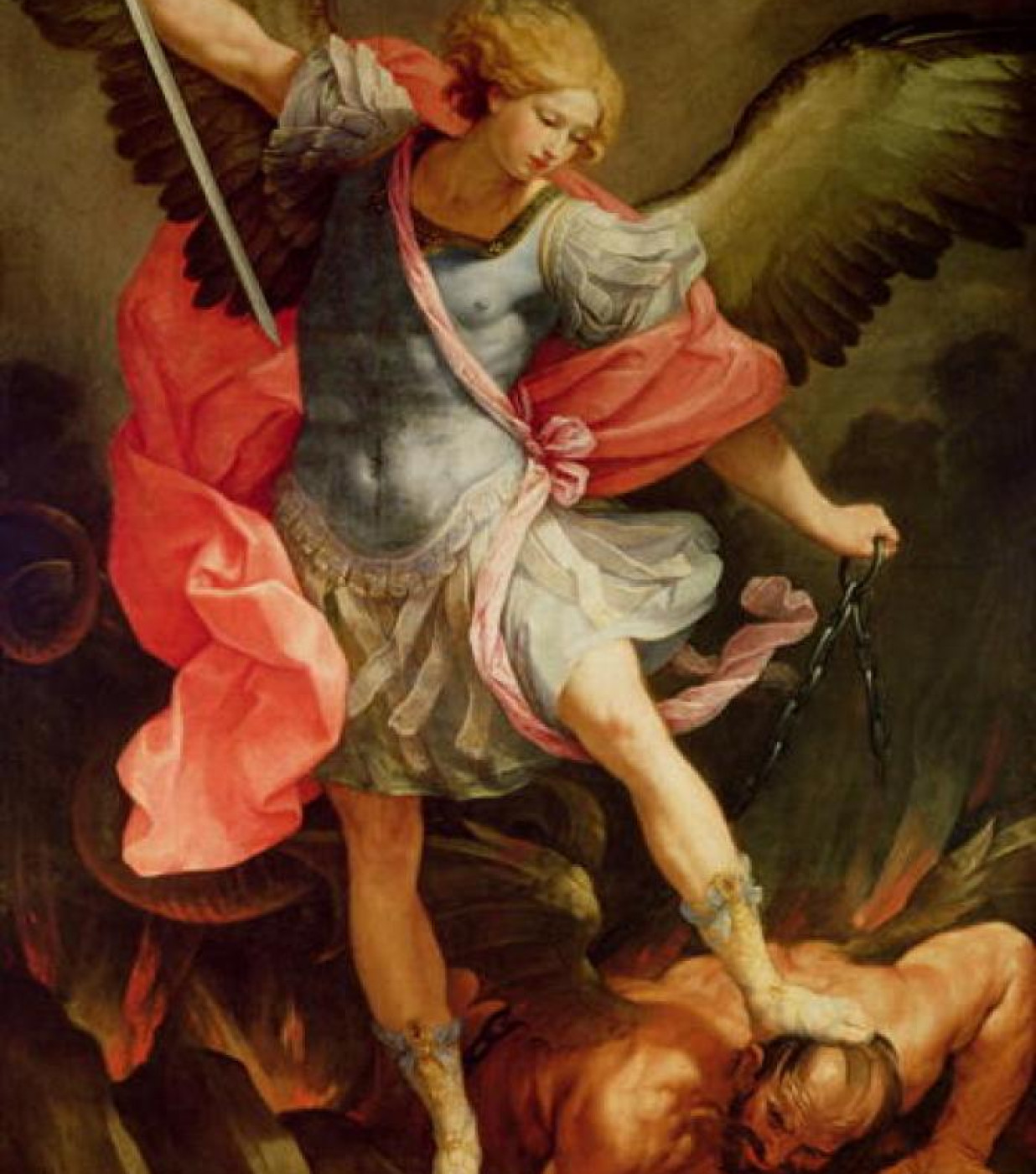 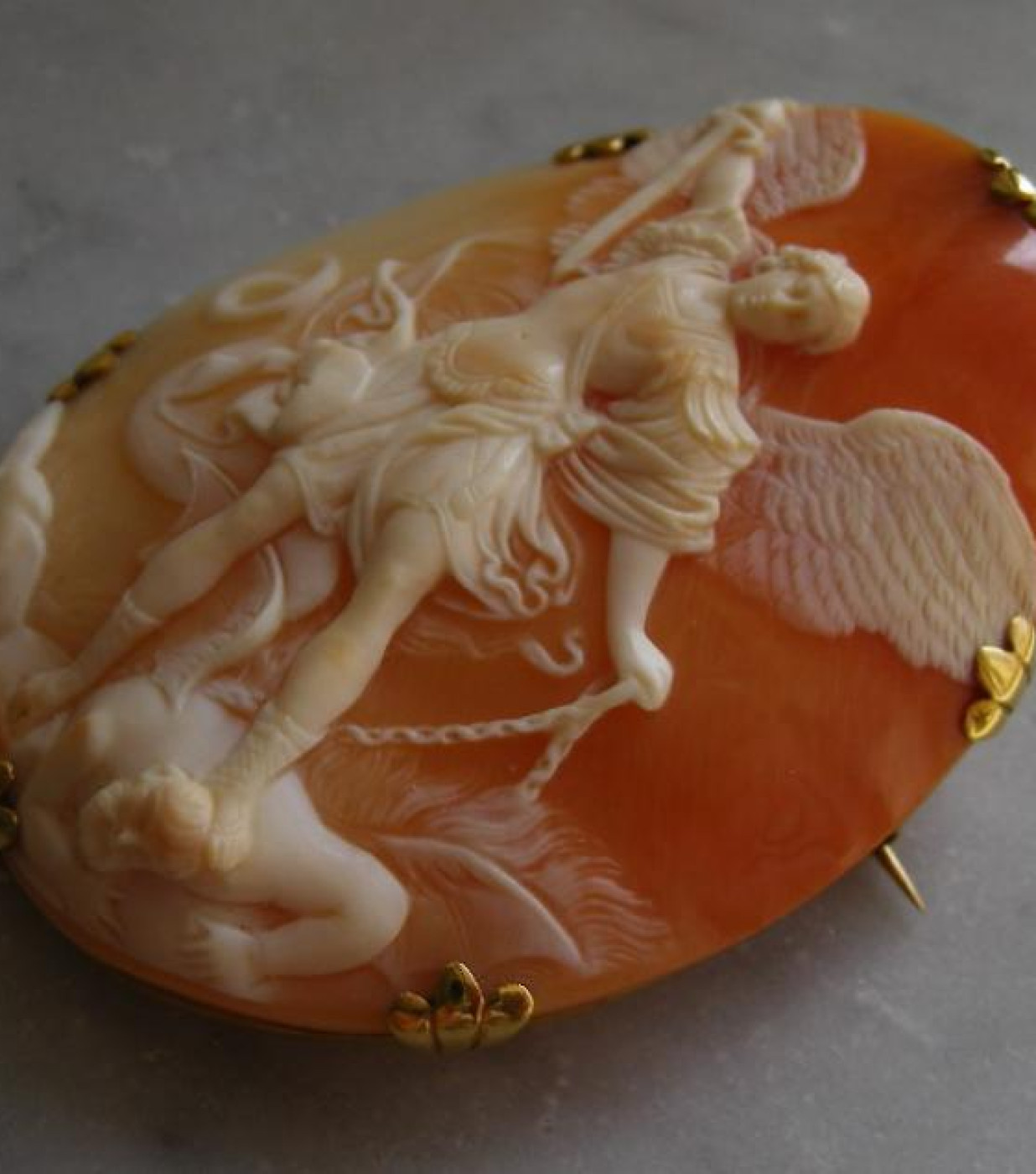 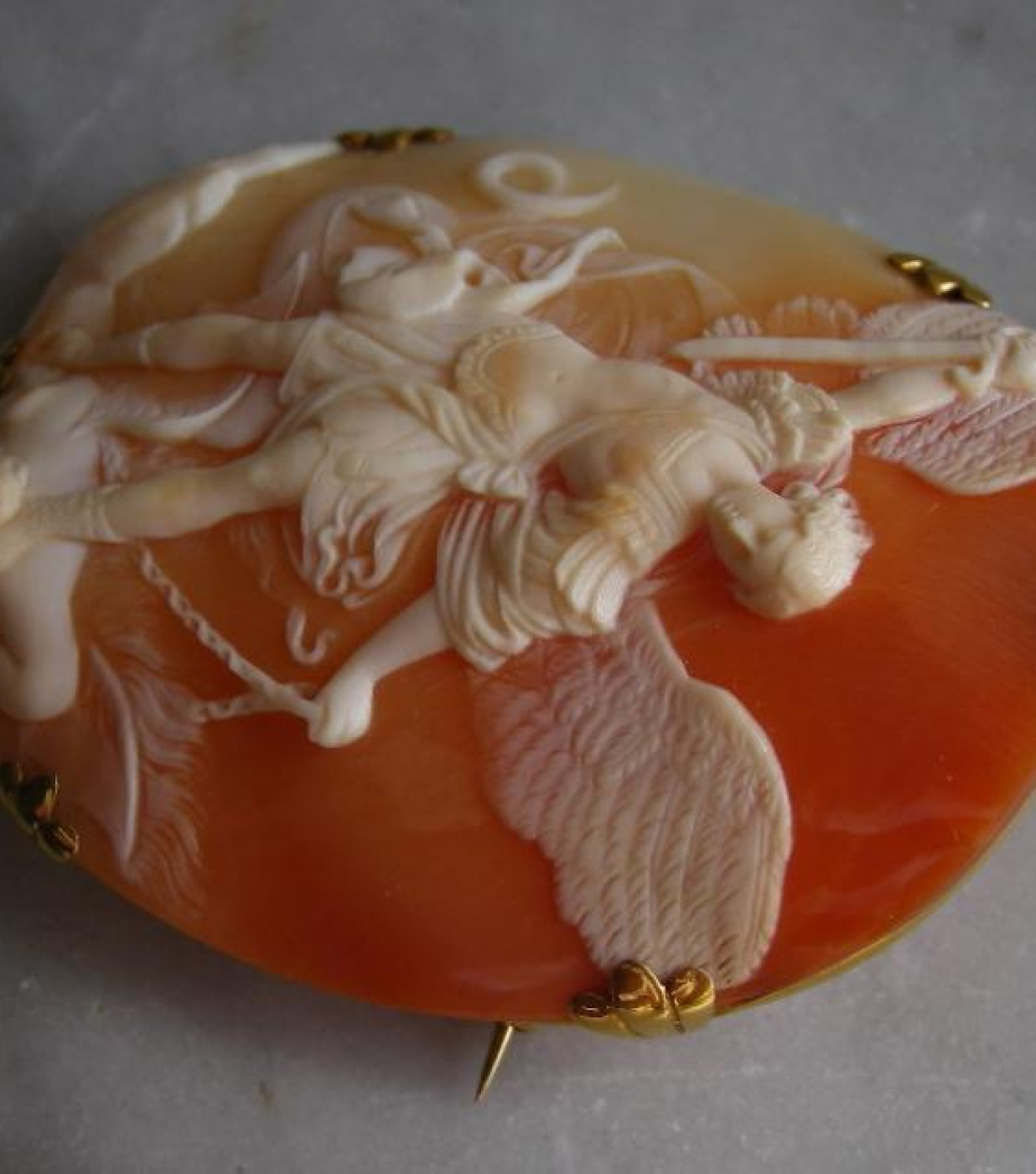 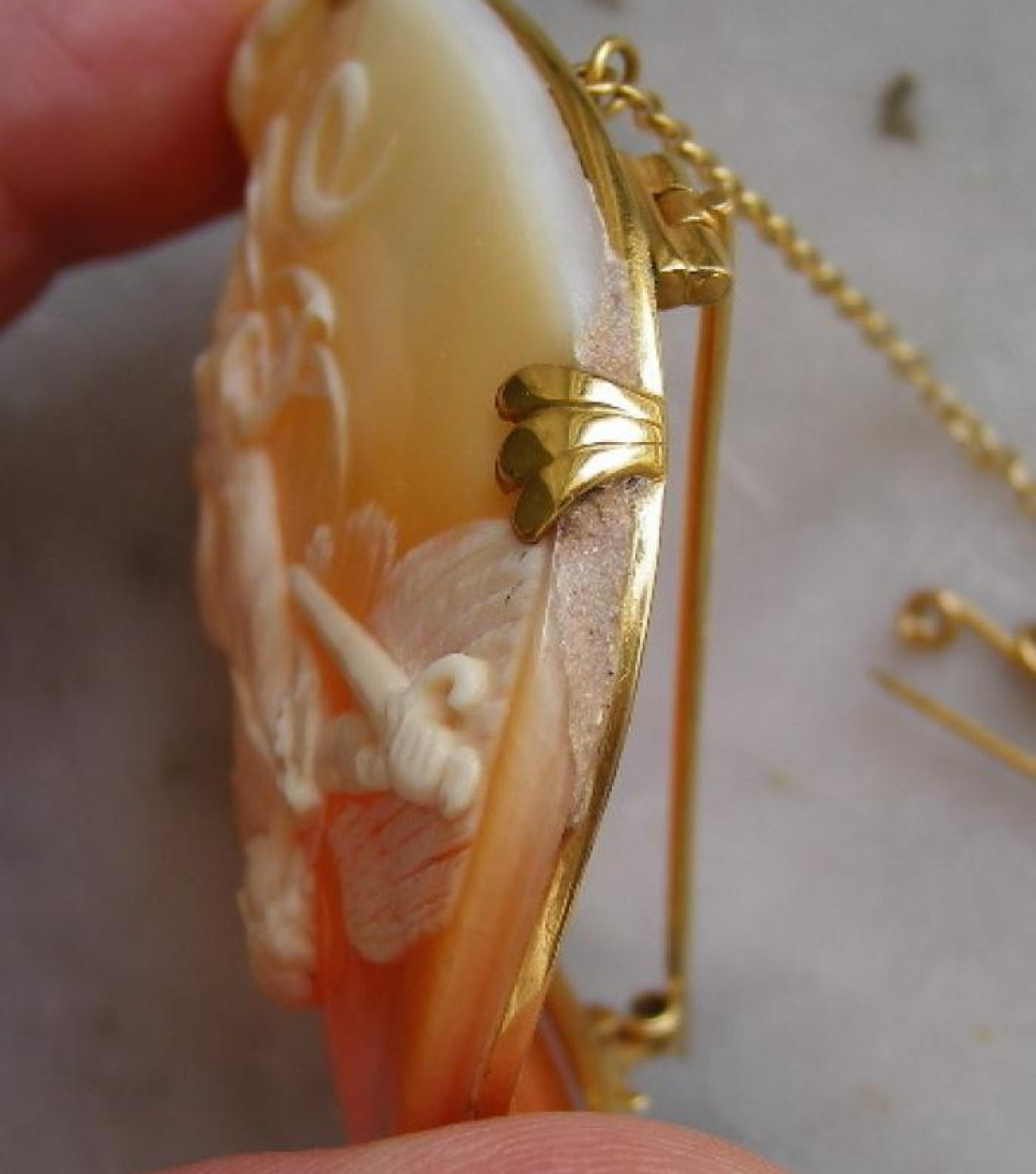 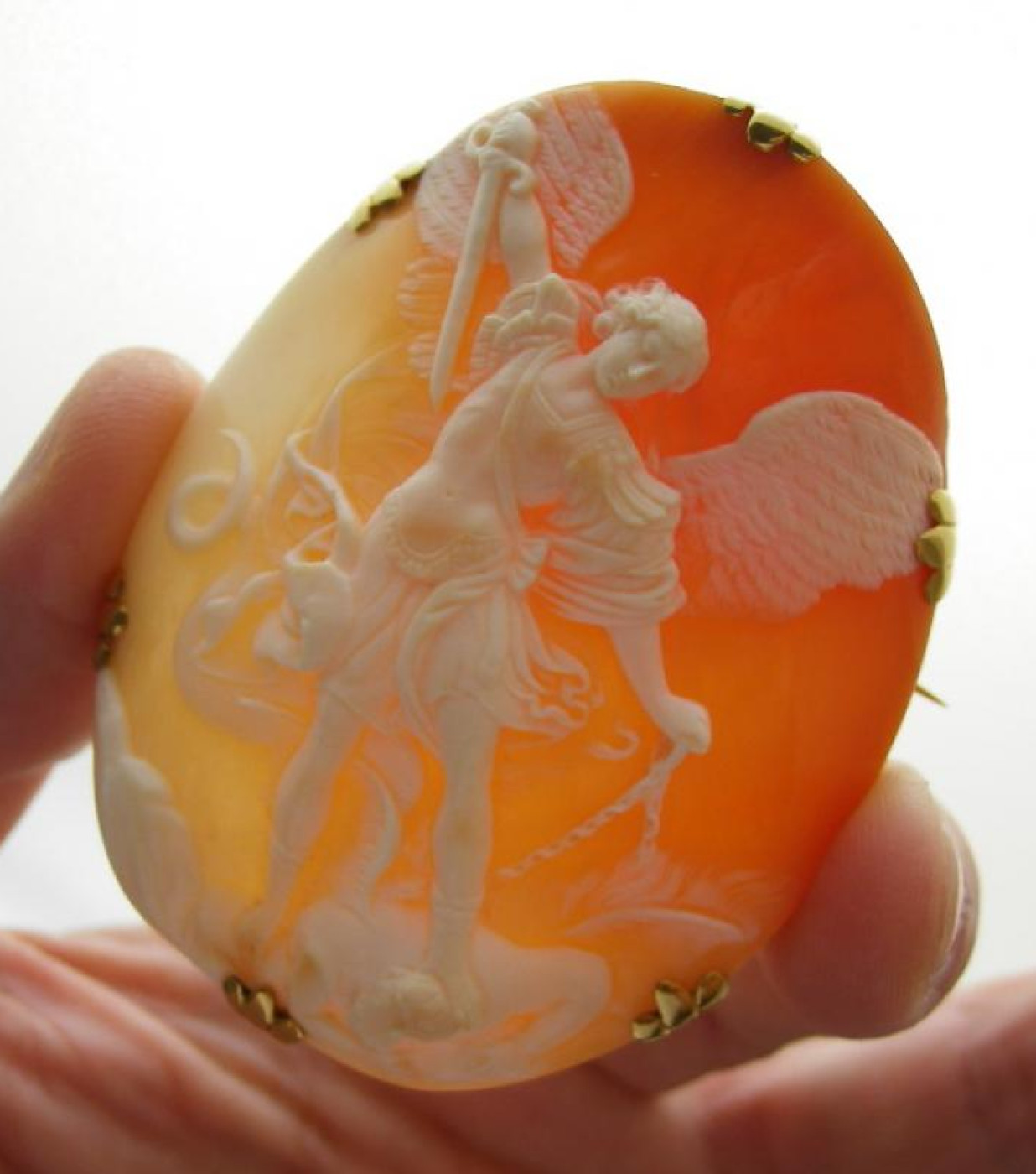 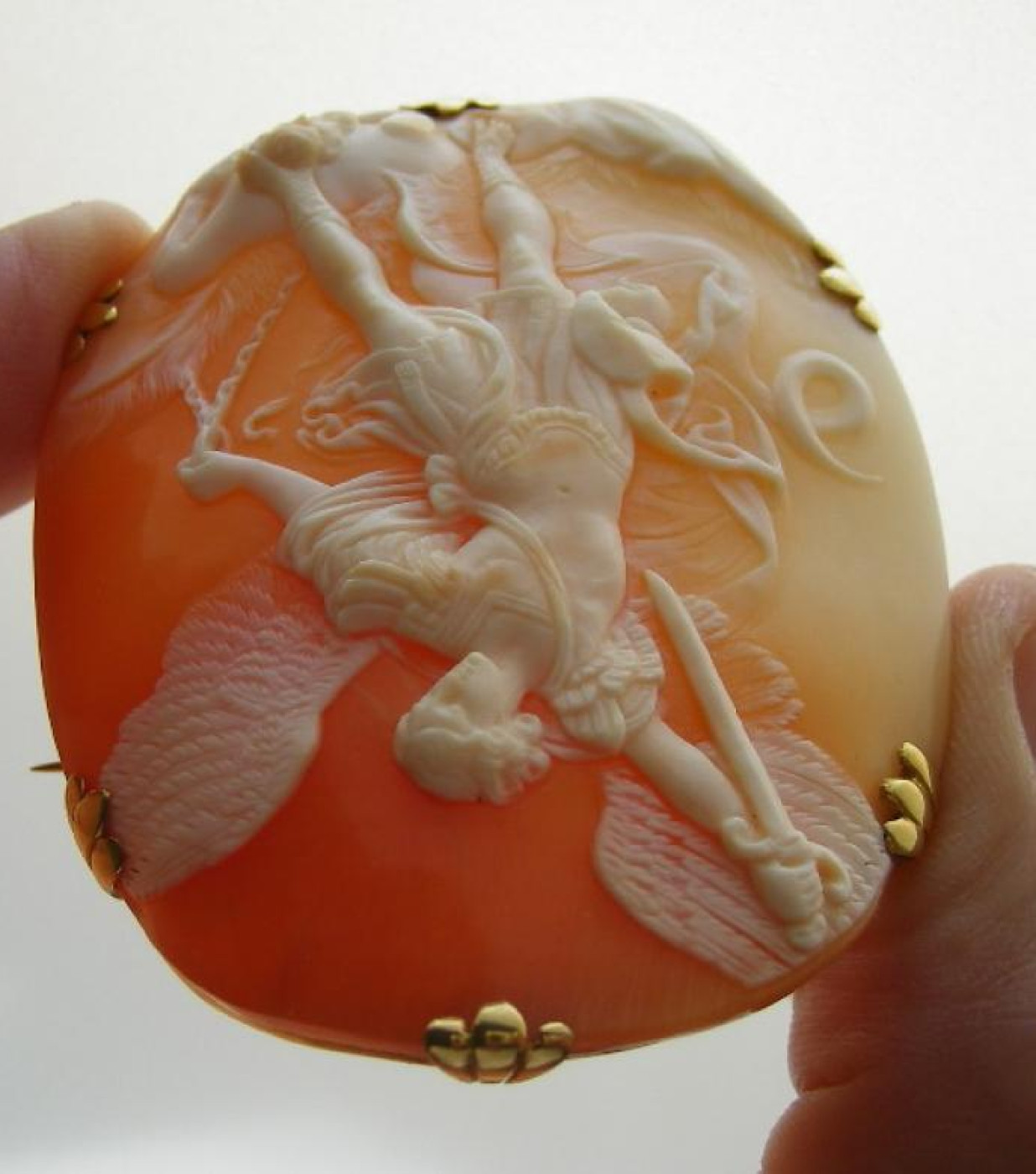 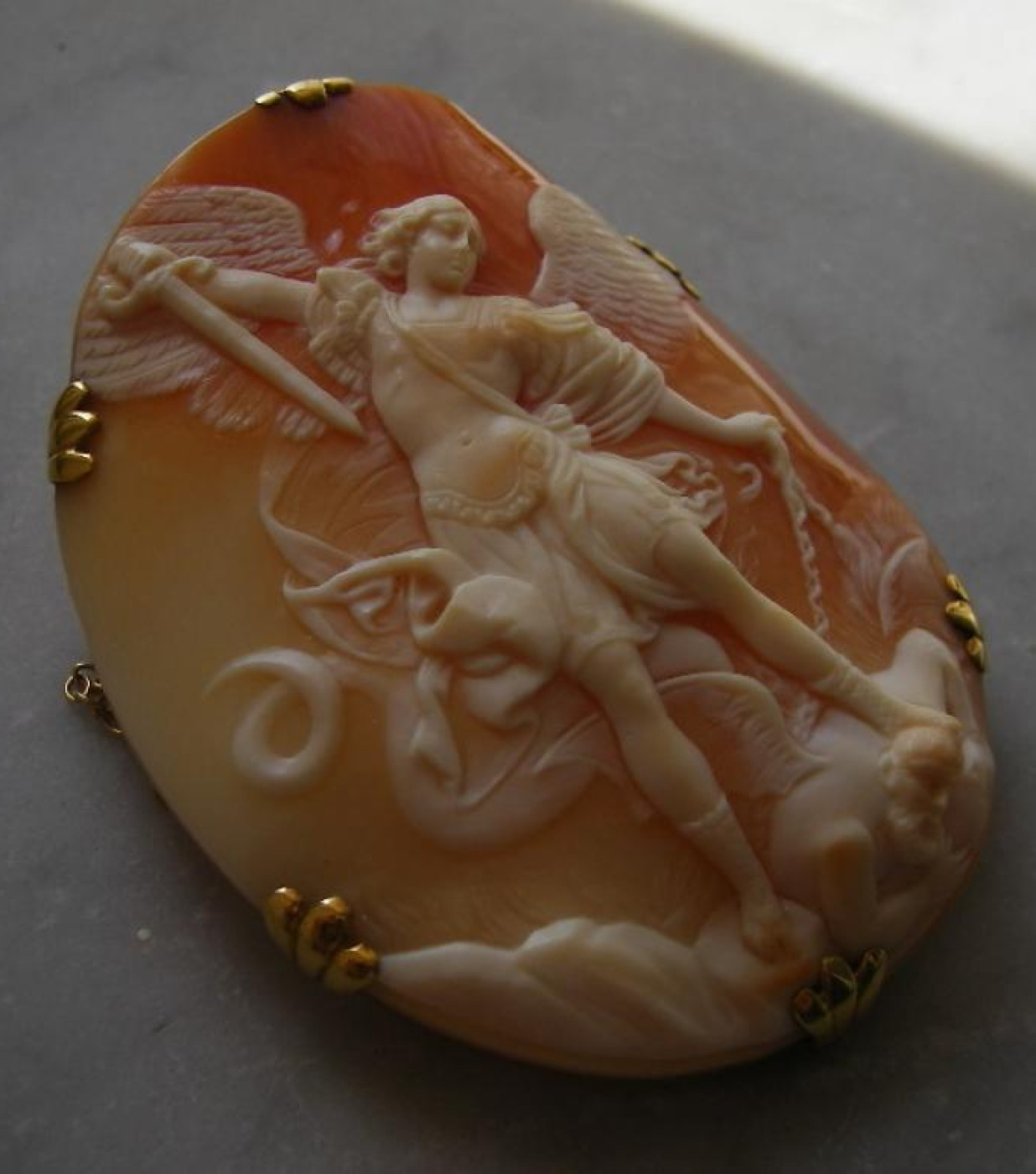 More than Museum Quality and huge cameo depicting a rarest subject, St. Michael the Archangel slaying the devil, after a painting from 1635 by Guido Reni (4 November 1575 – 18 August 1642) who was a prominent Italian painter of high-Baroque style, the same painter who also was the author of the fresco in Palazzo Rospigliosi in Rome depicting the chariot of Aurora. The painting of St. Michael is now in the Church of Santa Maria della Concezione, in Rome. This cameo is simply incredible. A real work of art from another one, the painting. The carver has fully respected the subject of the painting making this cameo an outstanding work of art.  I'm speechless looking at it.  Everything is masterly rendered. This is one of most beautiful cameos I have ever seen, the pictures speak by themselves. This is another masterly carved cameo. A very desirable collectors piece, rarest and museum quality cameo.
A bit of History:
Michael is an archangel in Jewish, Christian and Islamic tradition. He is viewed as the field commander of the Army of God. He is mentioned by name in the Book of Daniel, the Book of Jude and the Book of Revelation. In the book of Daniel, Michael appears as "one of the chief princes" who in Daniel's vision comes to the angel Gabriel's aid in his contest with the angel of Persia (Dobiel), and is also described there as the advocate of Israel and "great prince who stands up for the children of your [Daniel's] people". The name Michael means "One who is like God," as so, the name was said to have been the battle cry of the angels in the war in heaven against Satan and his followers, defying them through the very question of the nature of the Lord that those fallen ones were by themselves led to dismiss.
Much of the late detail about Michael was transmitted to Christianity through the Book of Enoch, whence it was taken up and further elaborated. In late medieval Christianity, Michael, together with Saint George, became the patron saint of chivalry, and of the first chivalric order of France, the Order of Saint Michael of 1469. In the British honours system, a chivalric order founded in 1818 is also named for these two saints, the Order of St Michael and St George. St Michael is also considered in many Christian circles as the patron saint of the warrior. Police officers and soldiers, particularly paratroopers, regard him as their patron. He is also a patron of Germany and of the city of Brussels. Roman Catholics refer to him as Saint Michael the Archangel and also simply as Saint Michael.