Shell Cameo Brooch The Madonna of the Chair 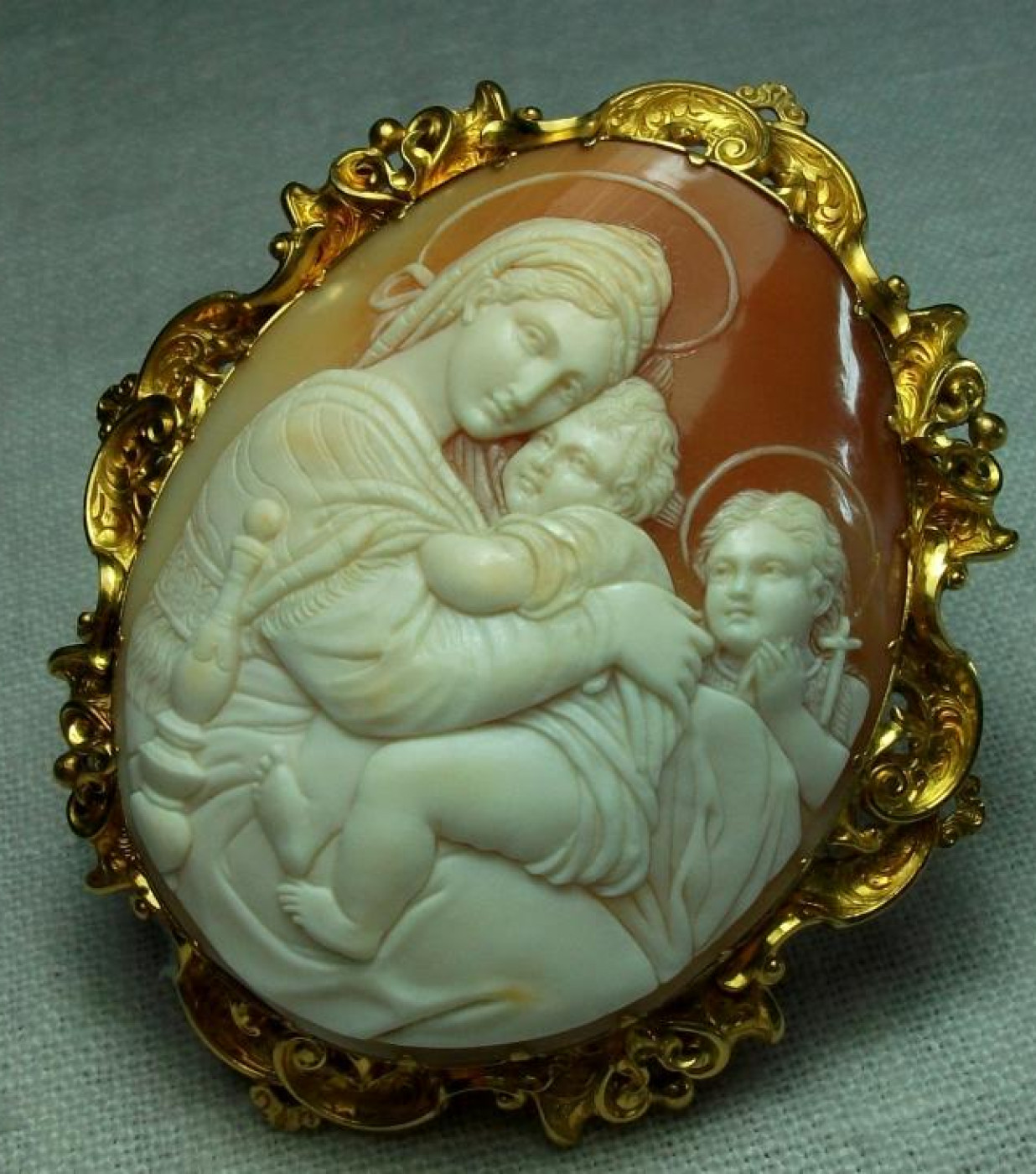 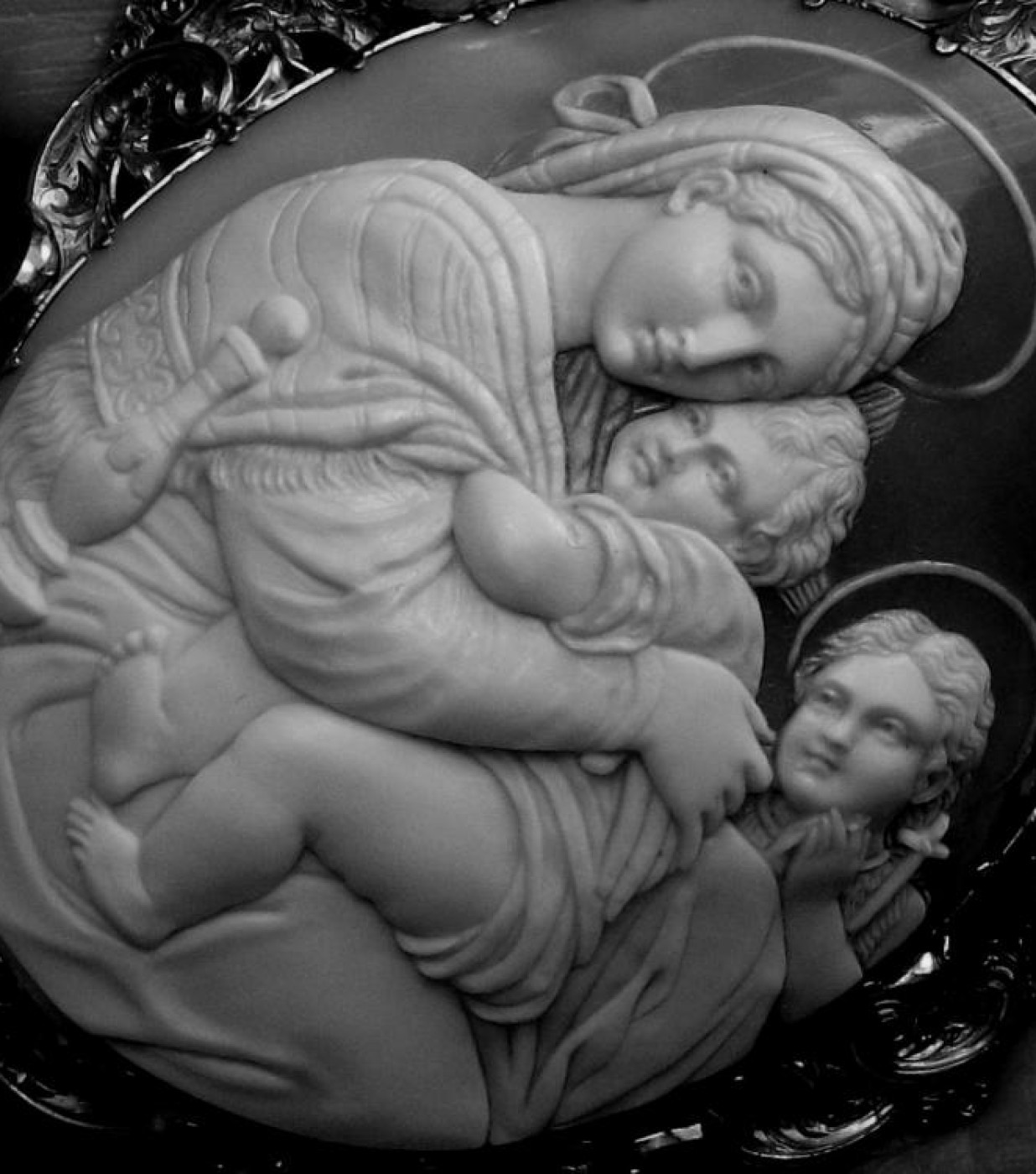 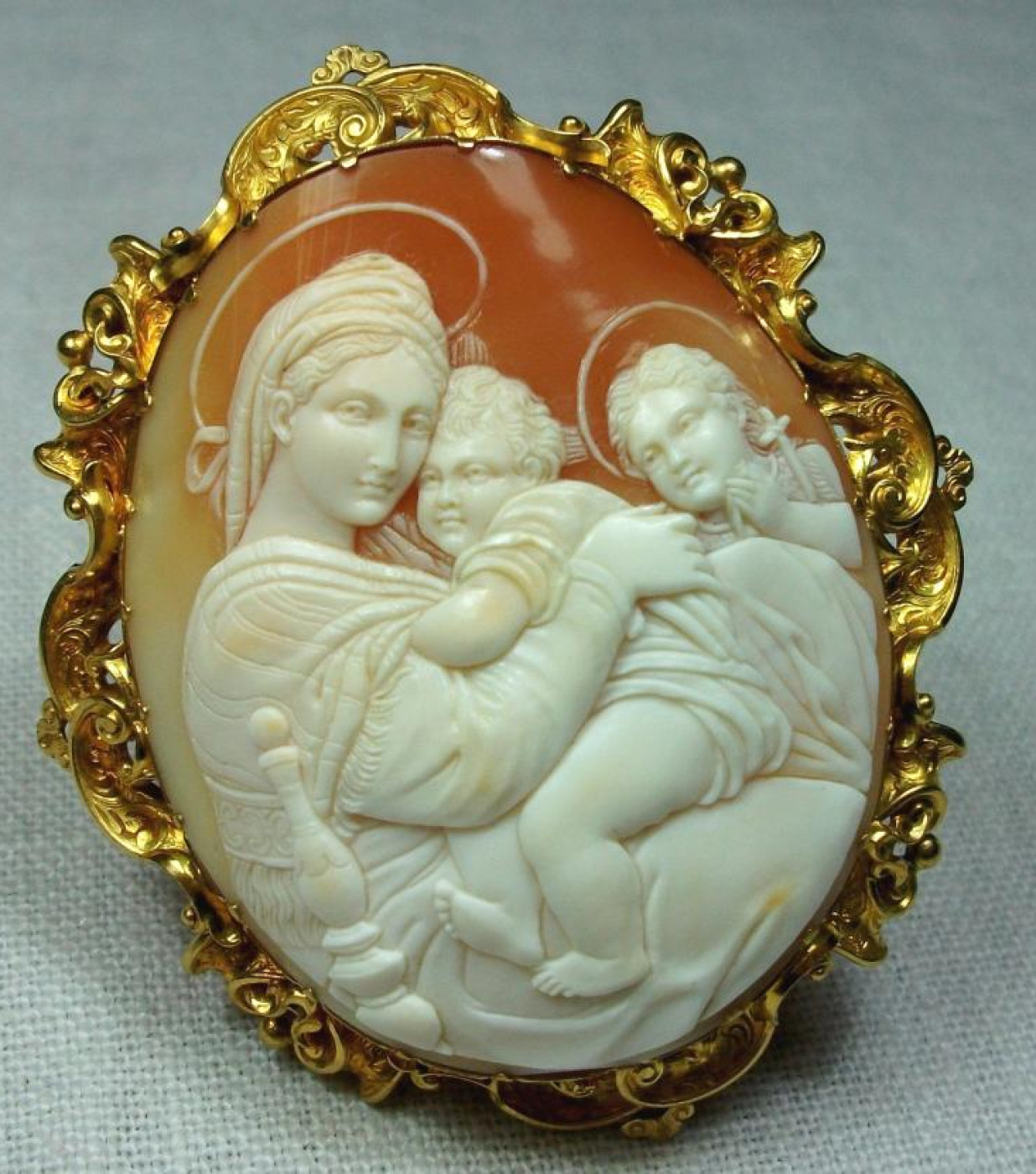 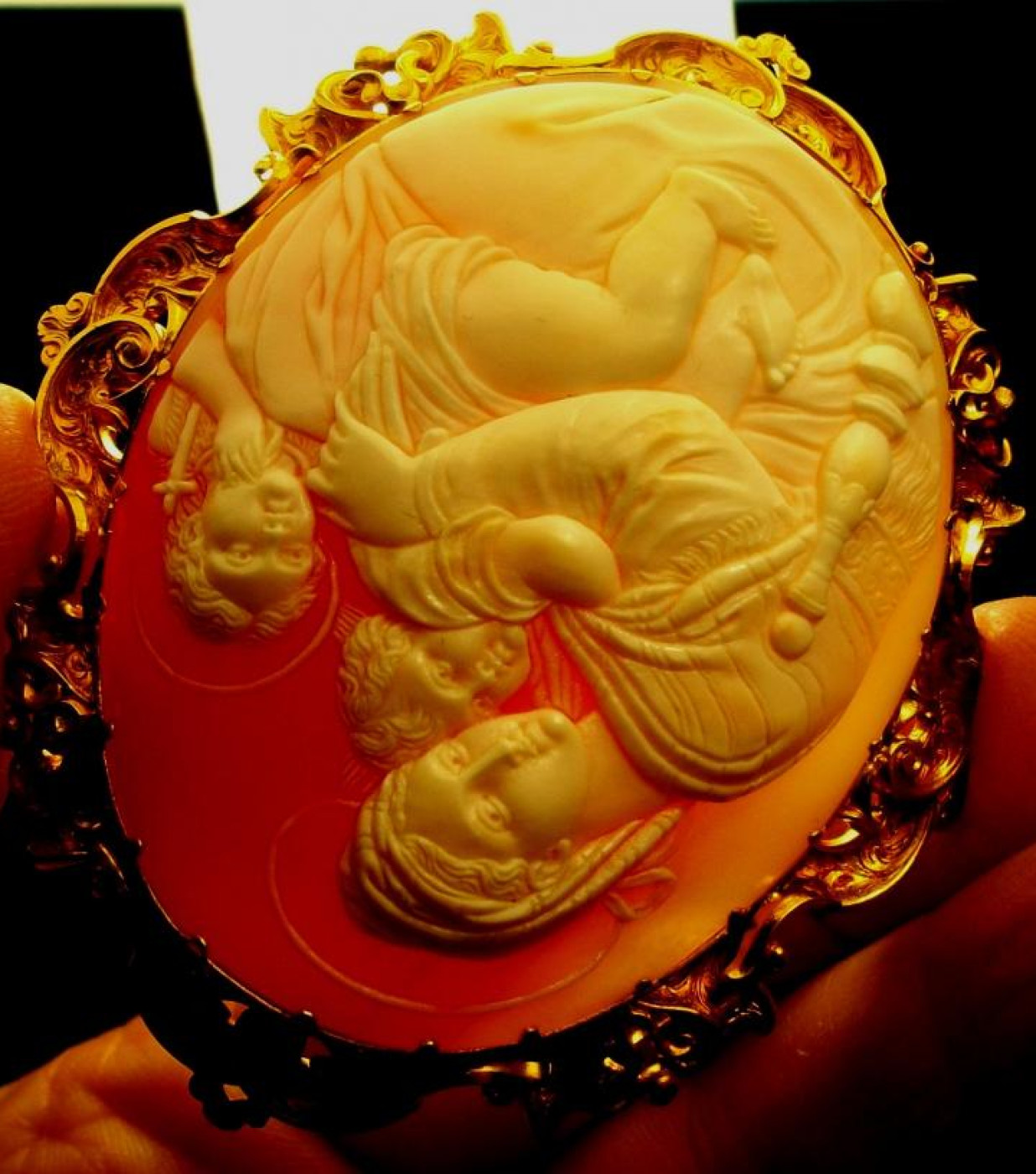 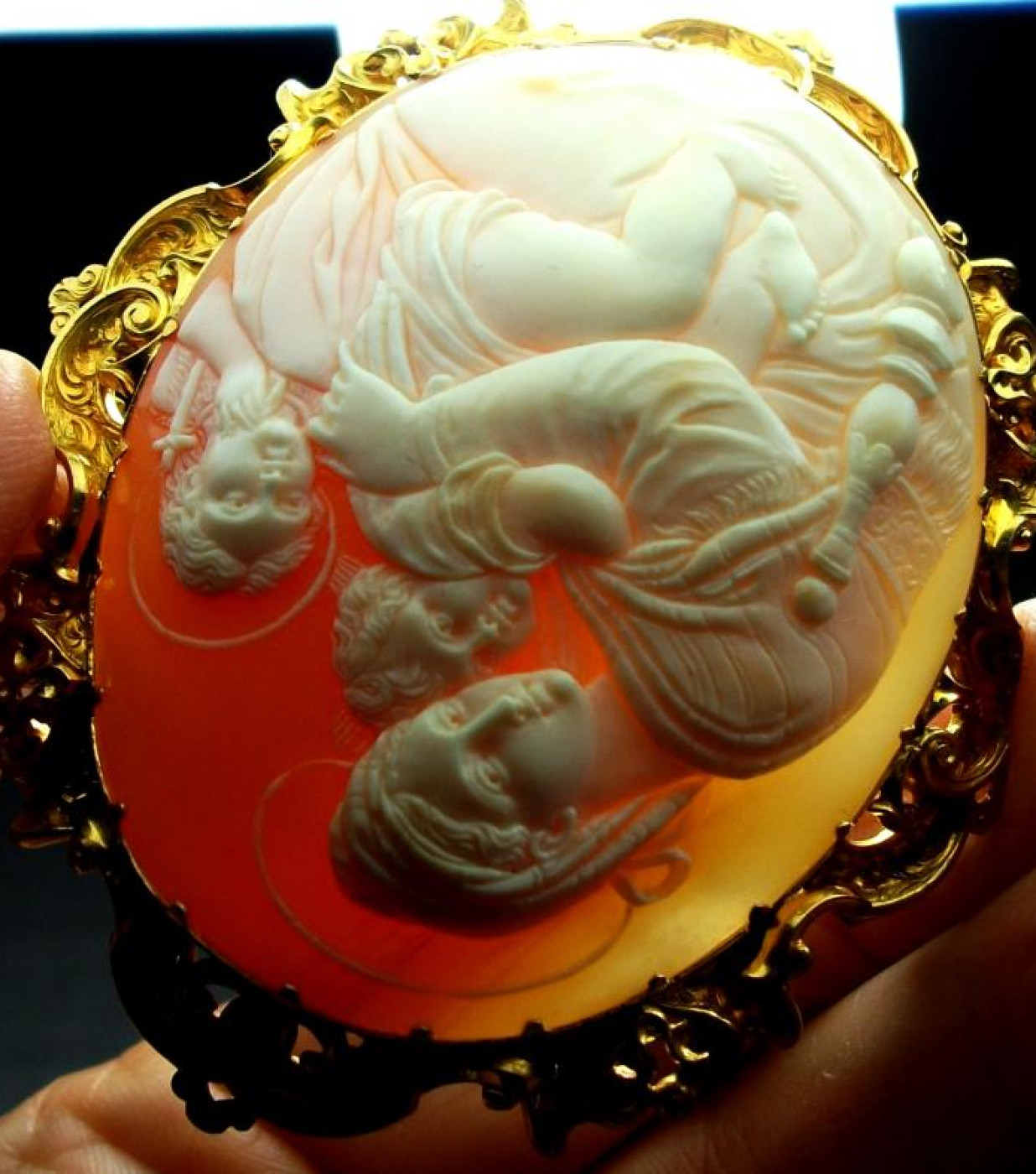 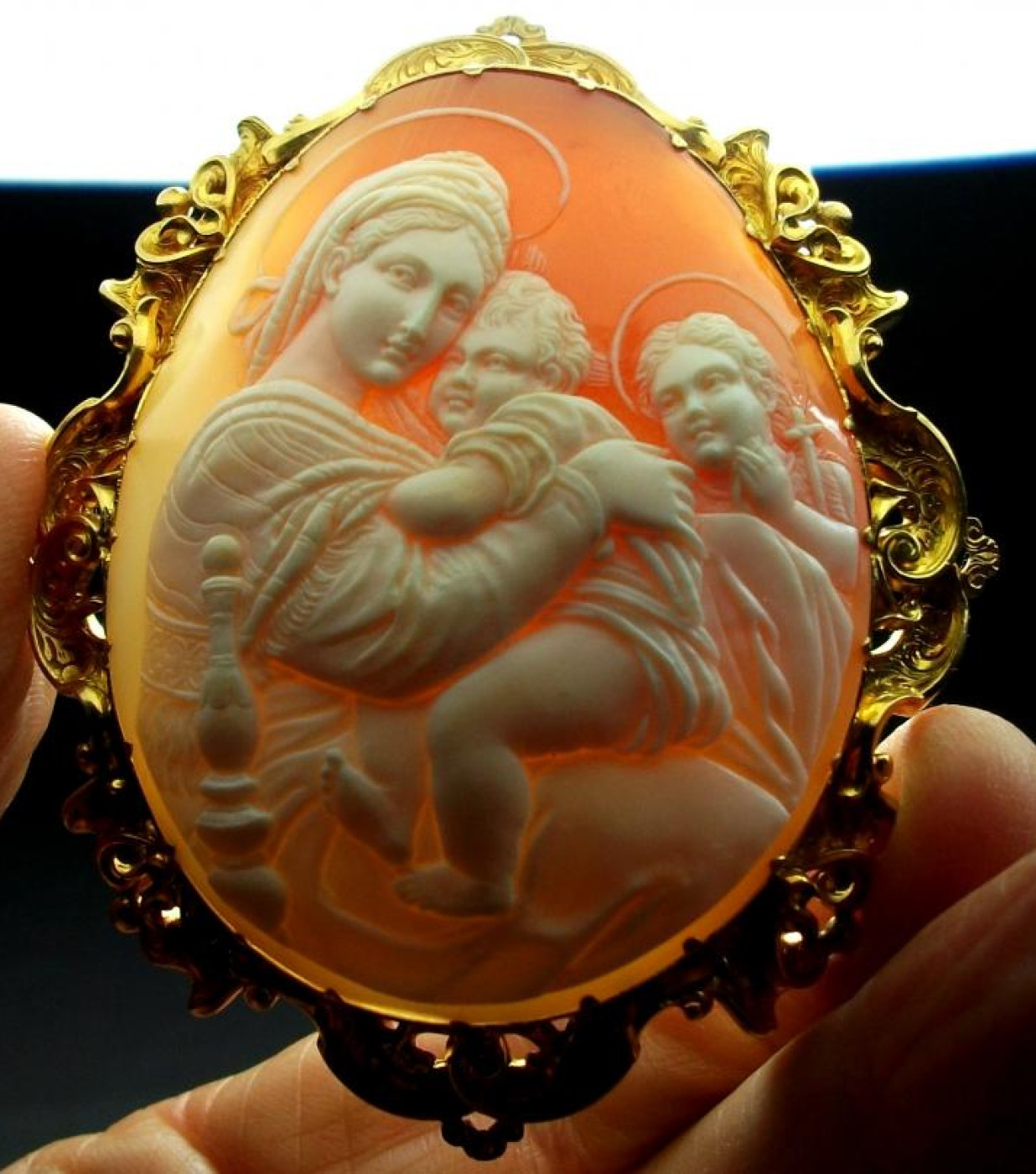 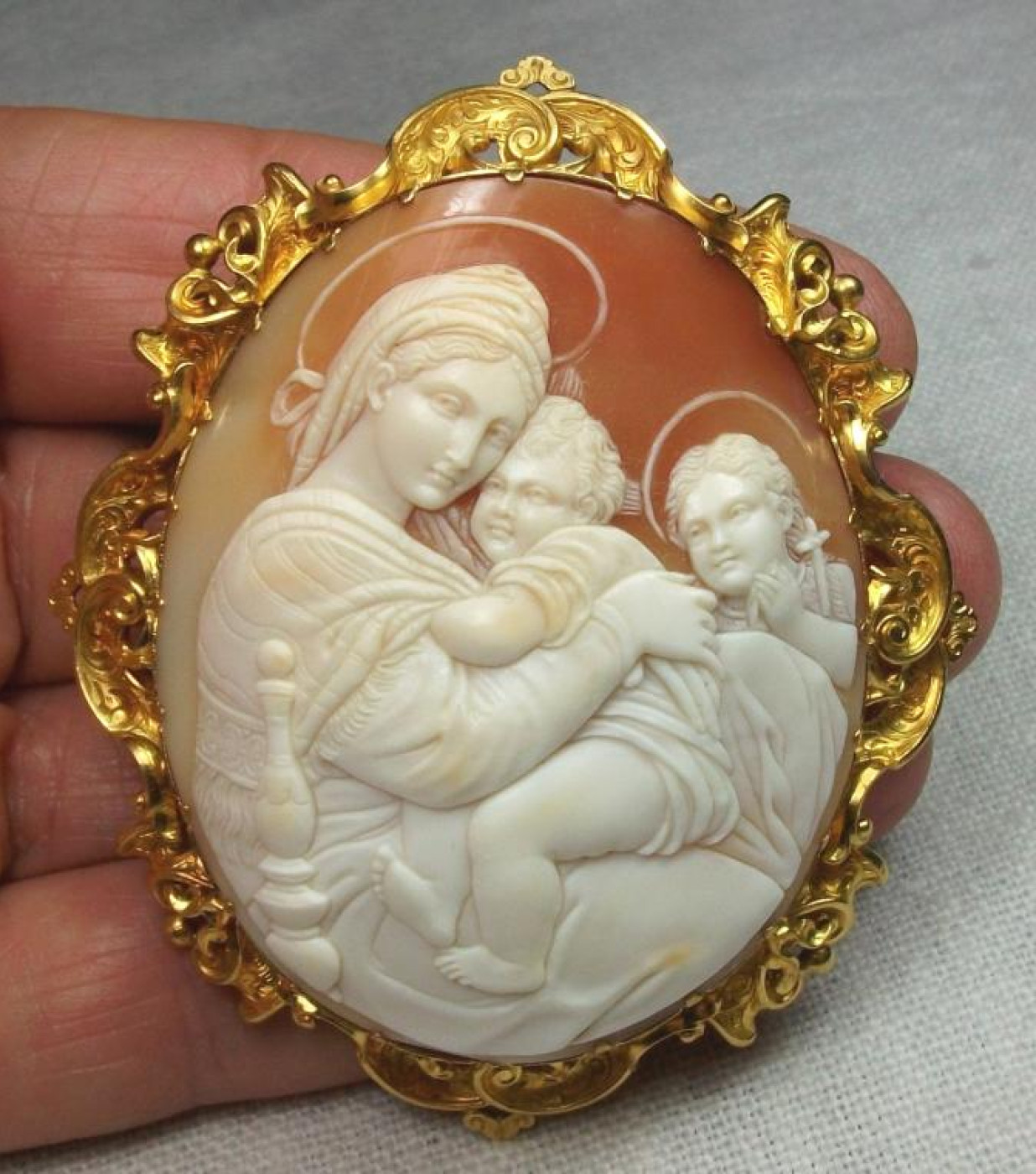 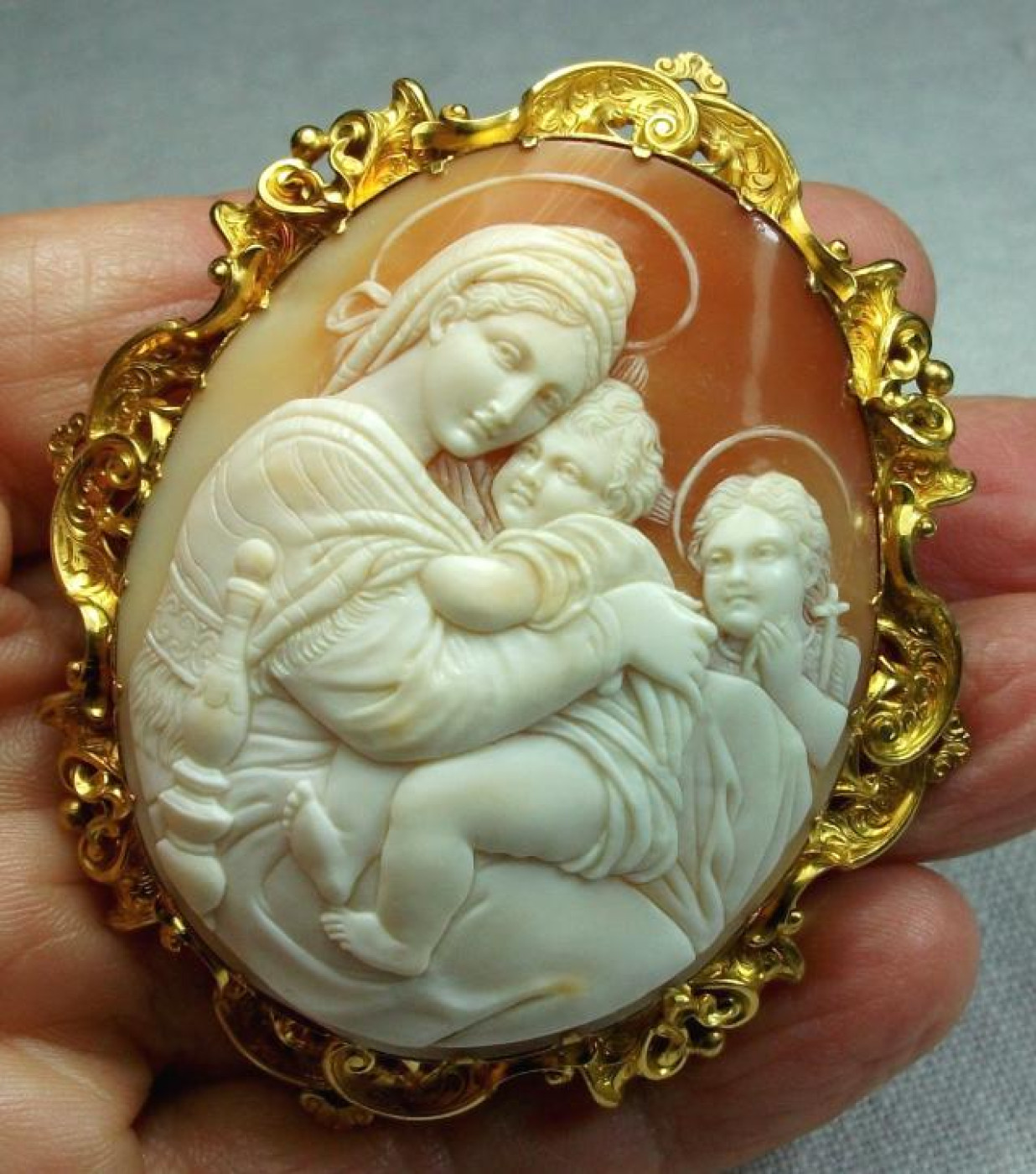 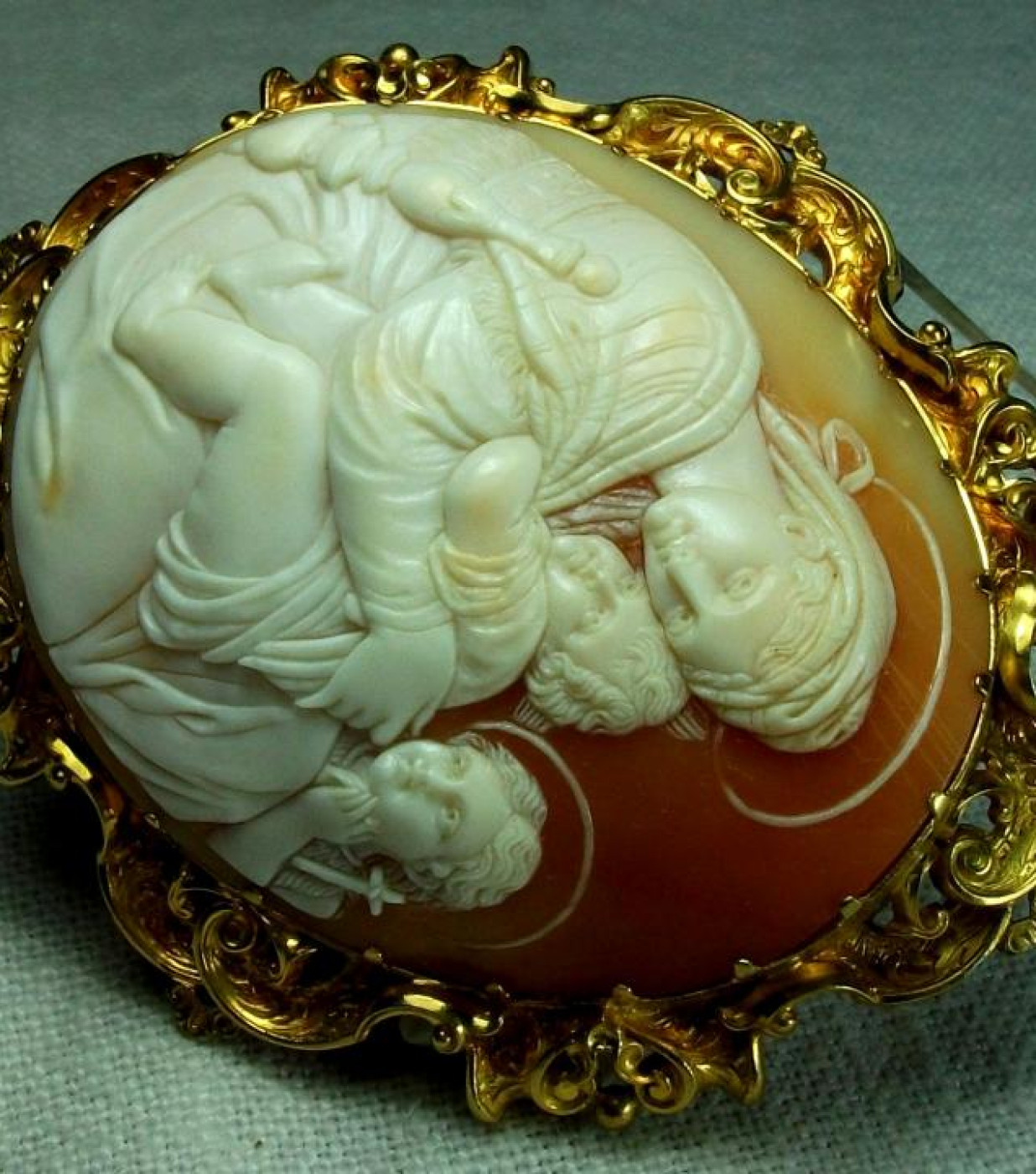 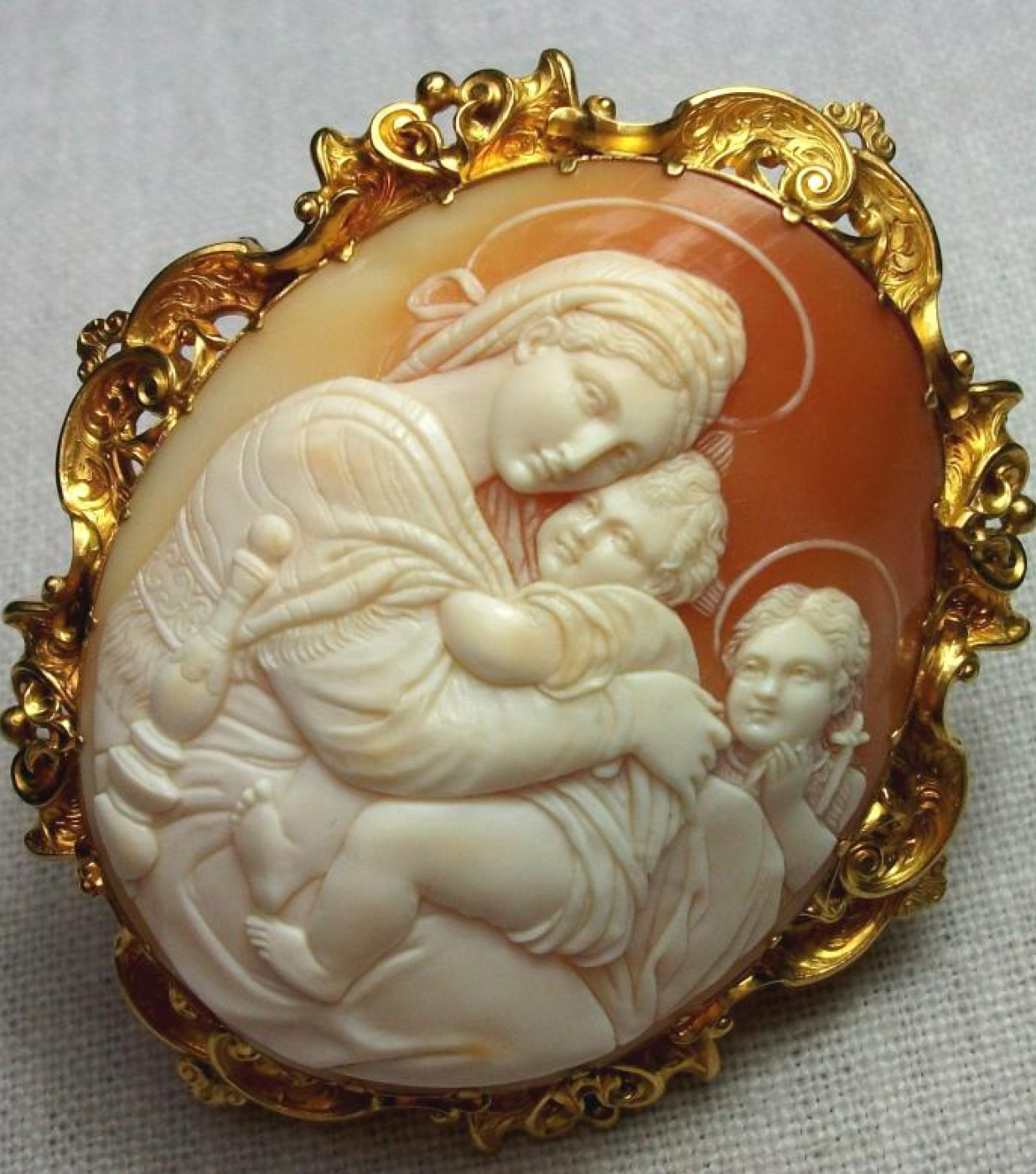 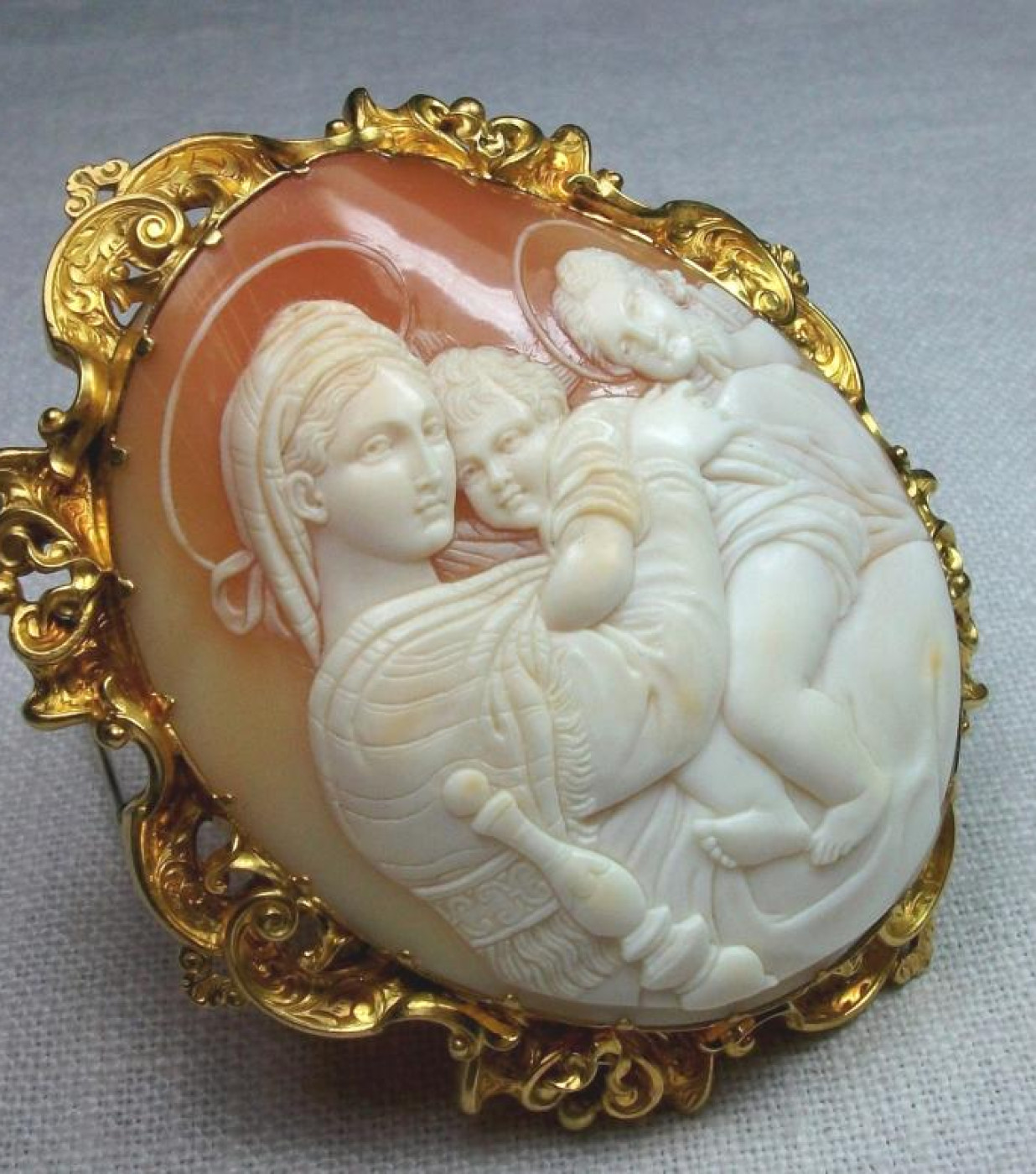 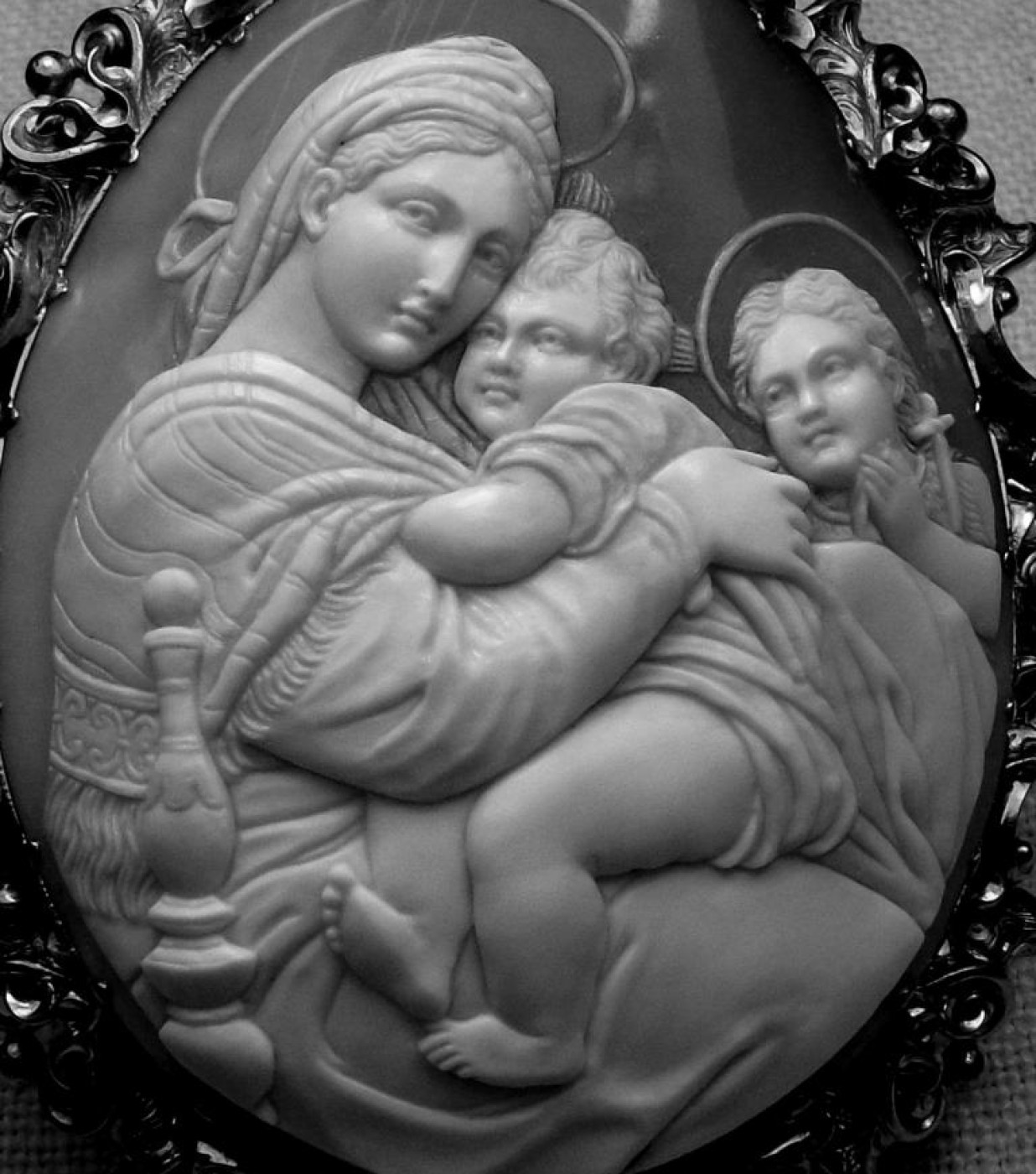 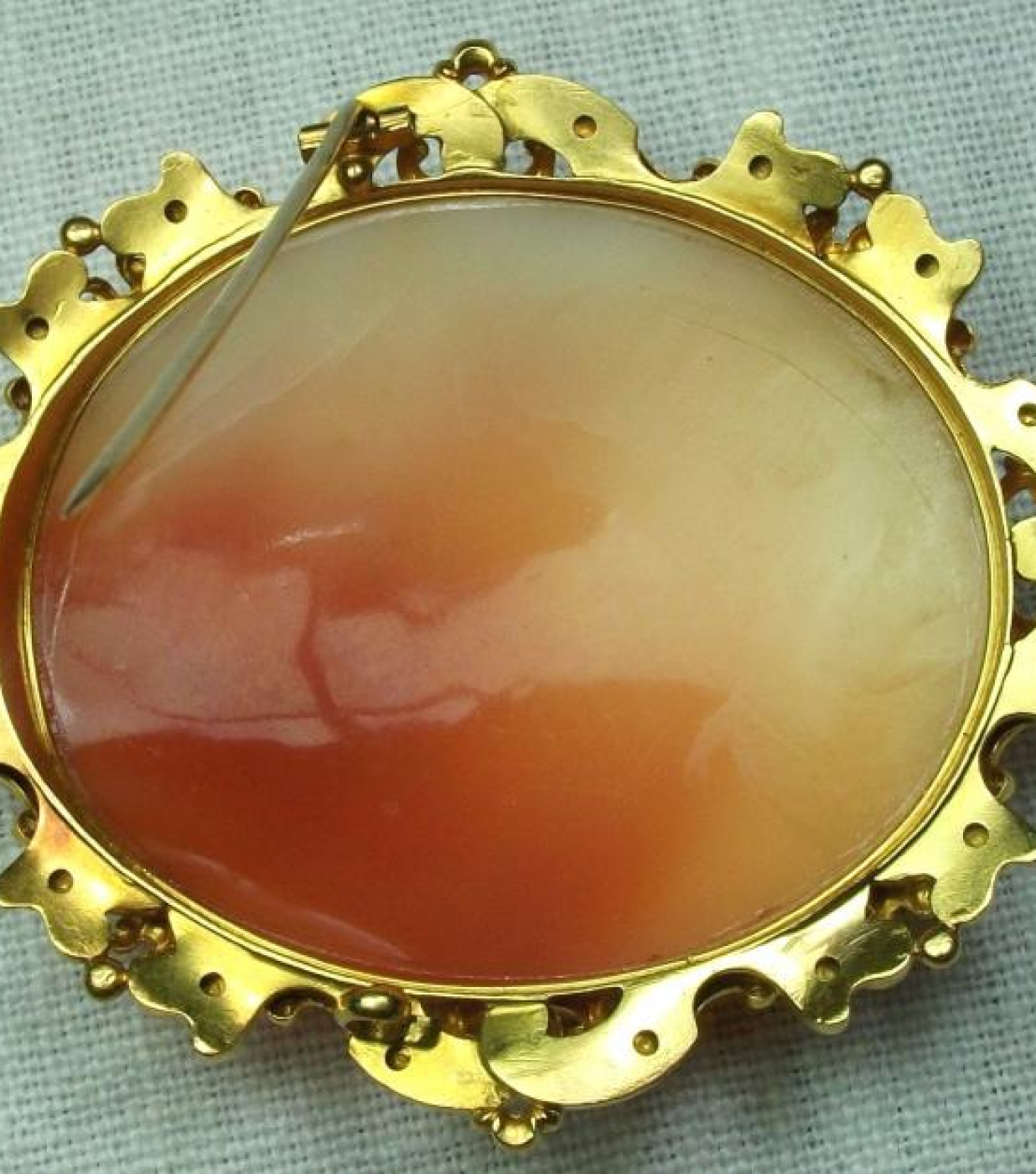 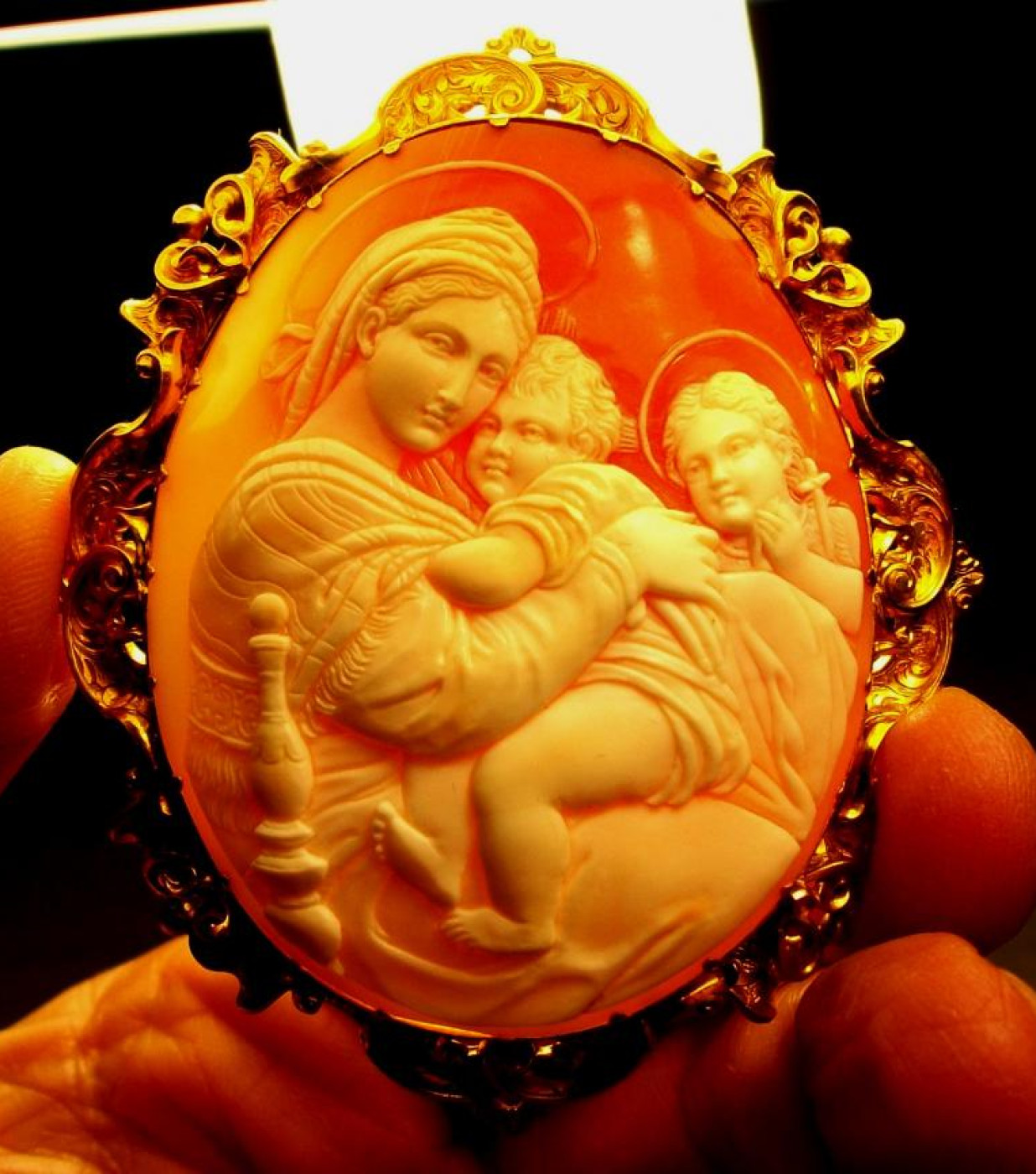 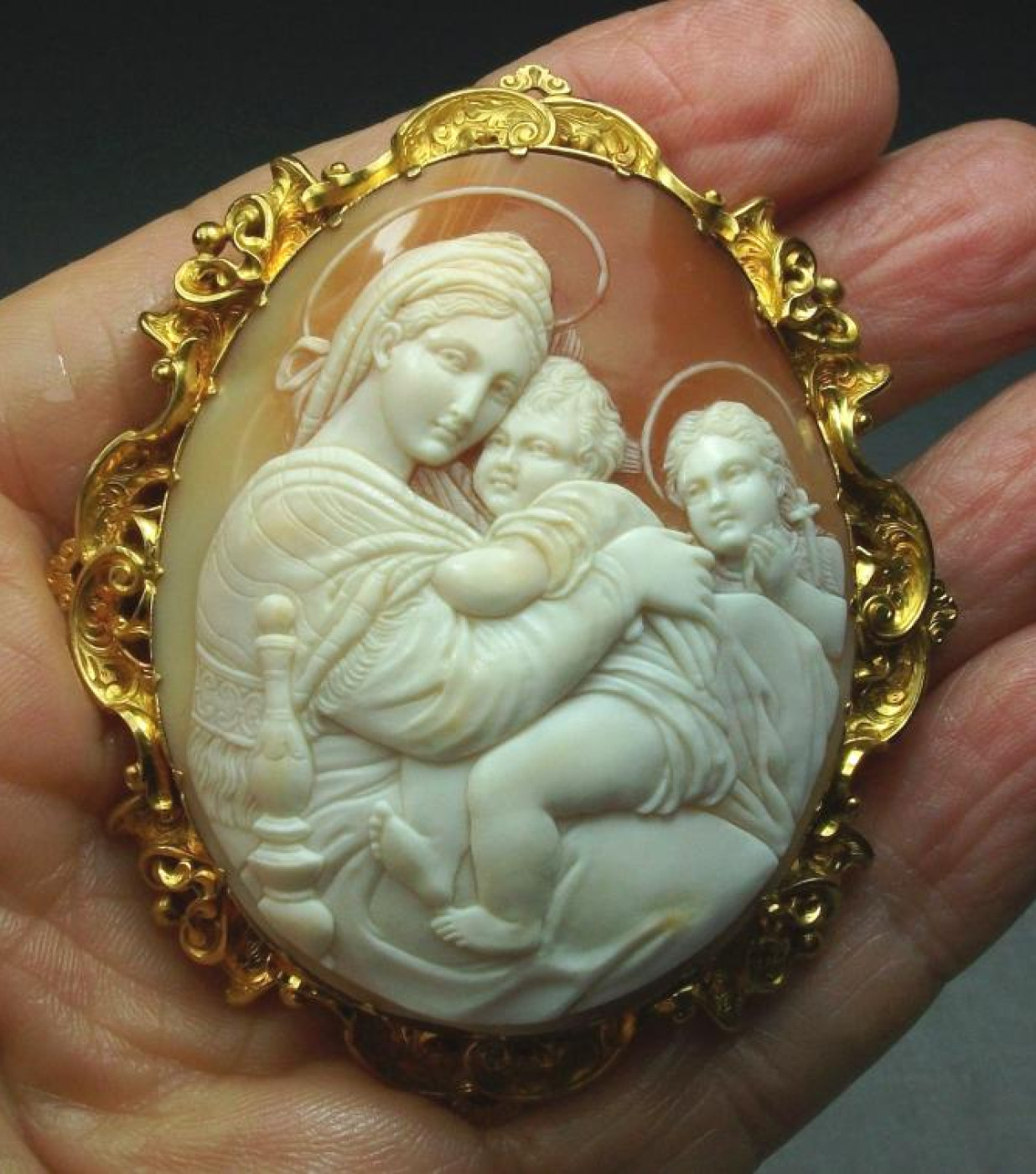 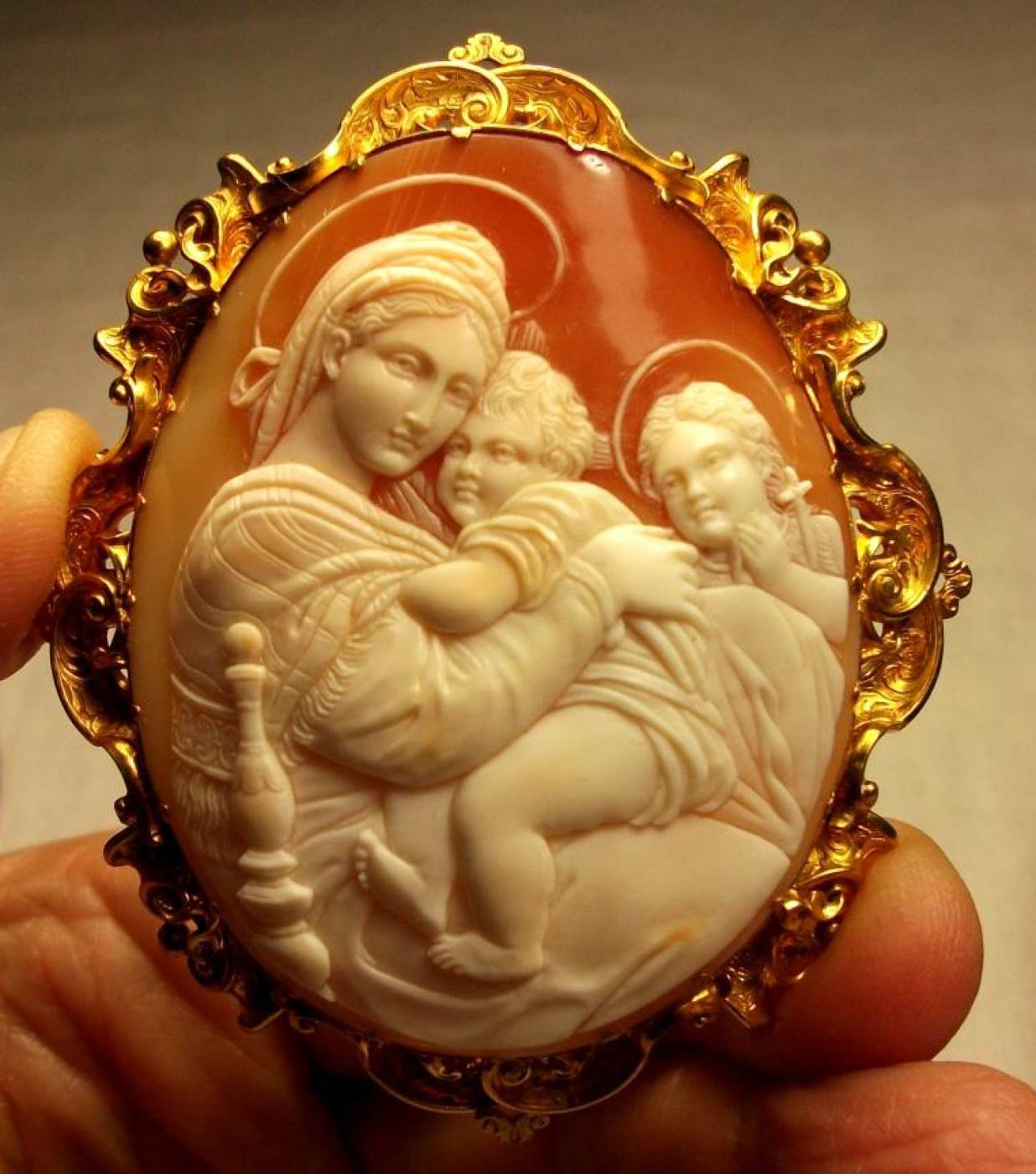 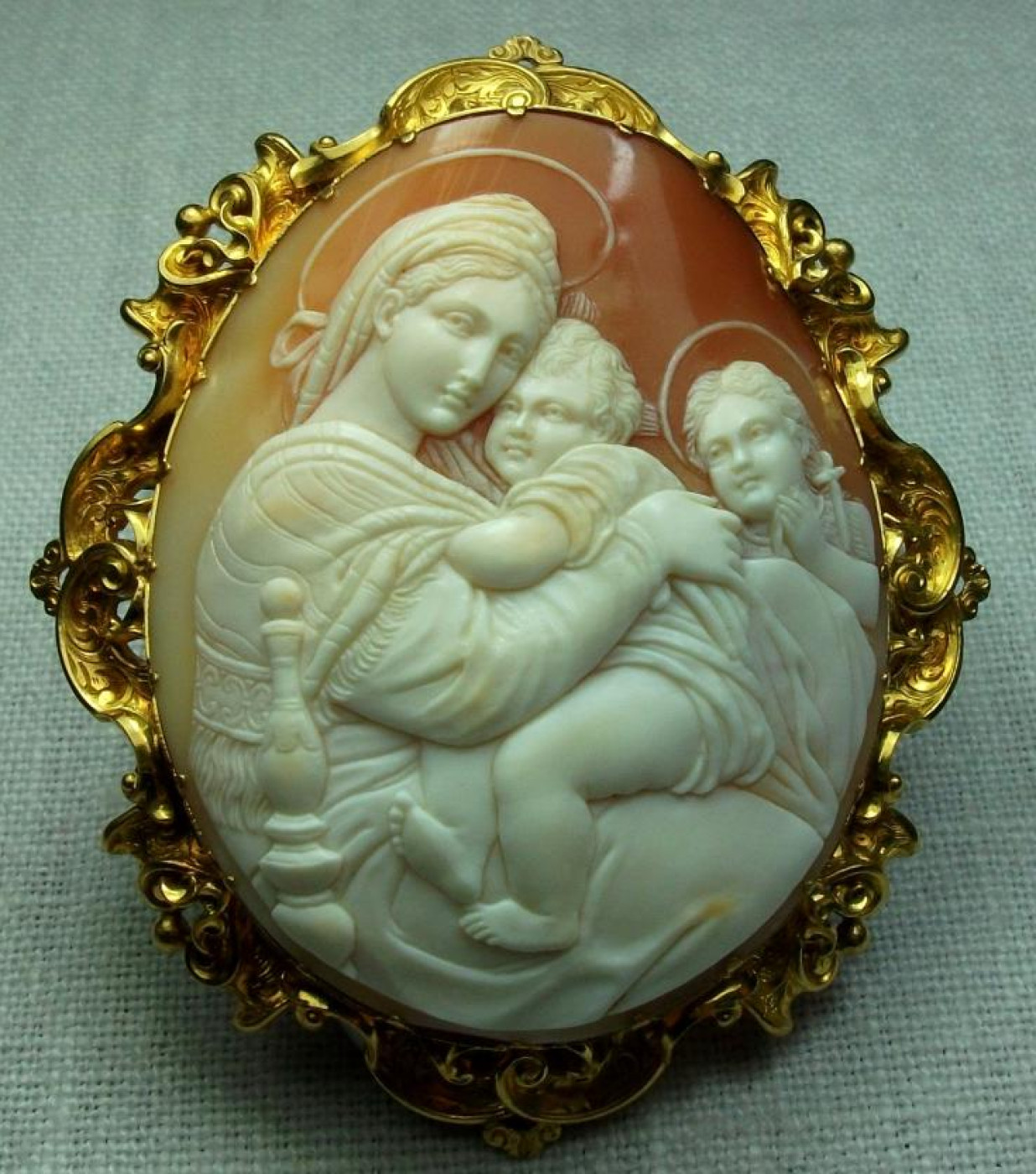 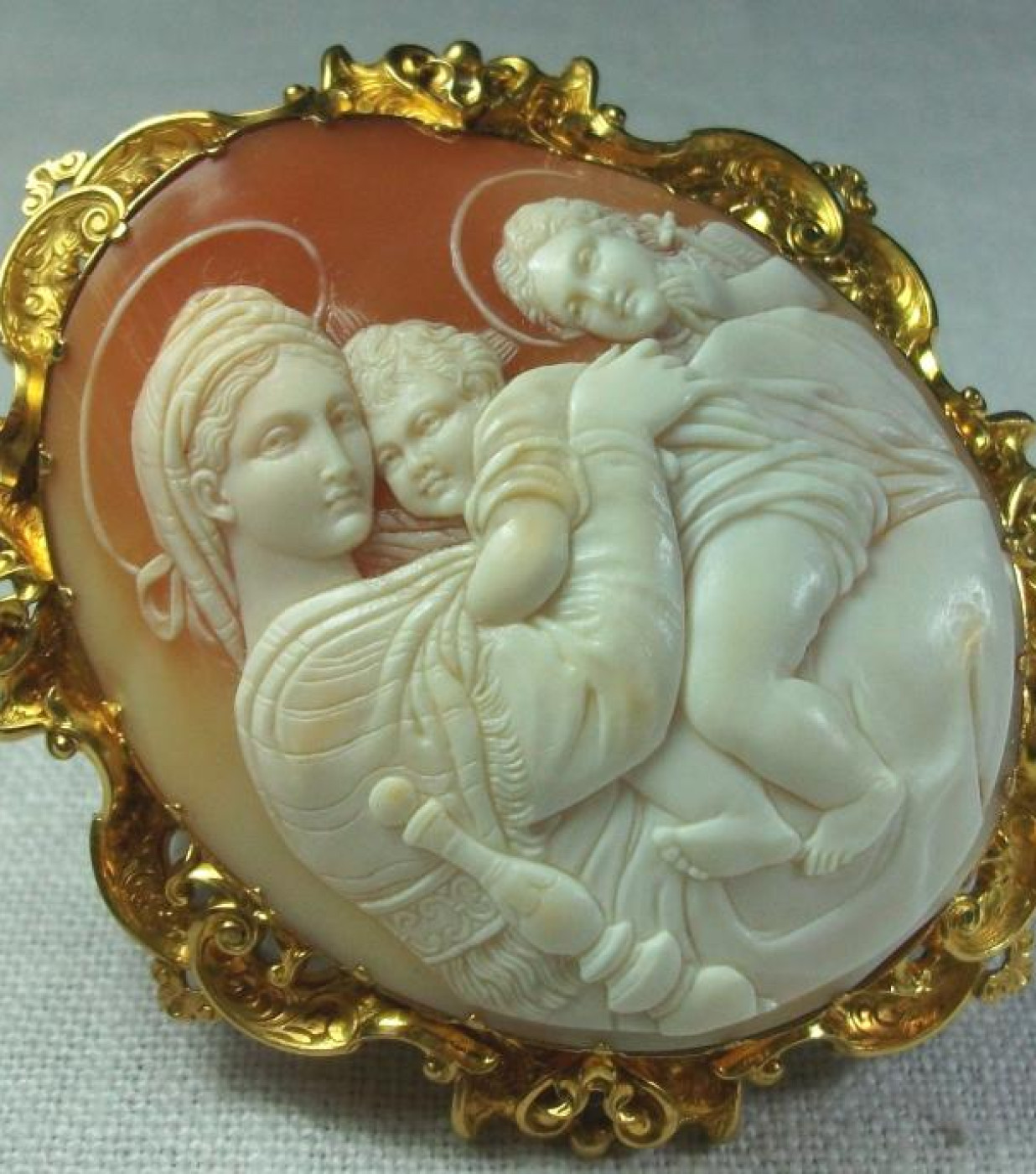 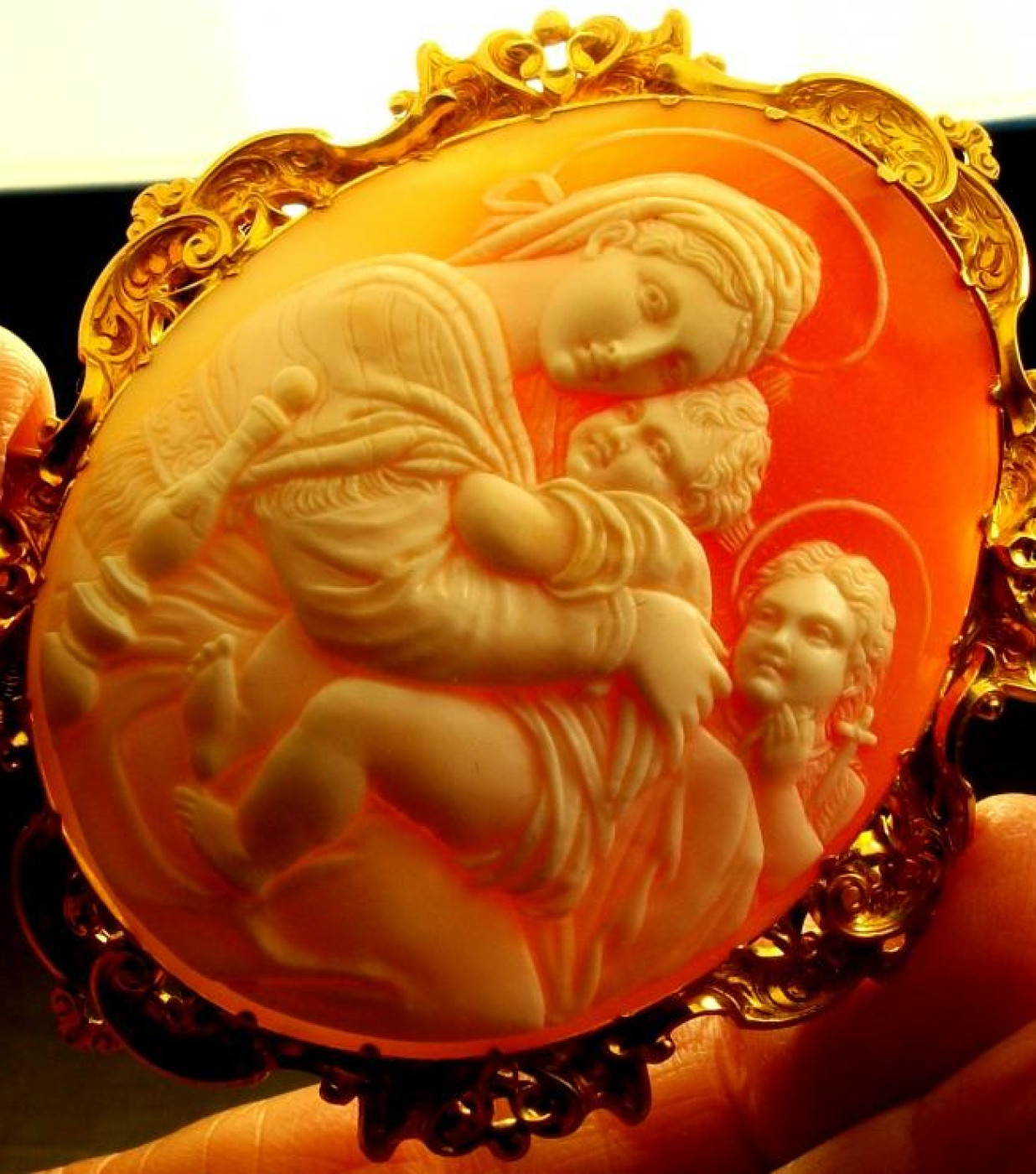 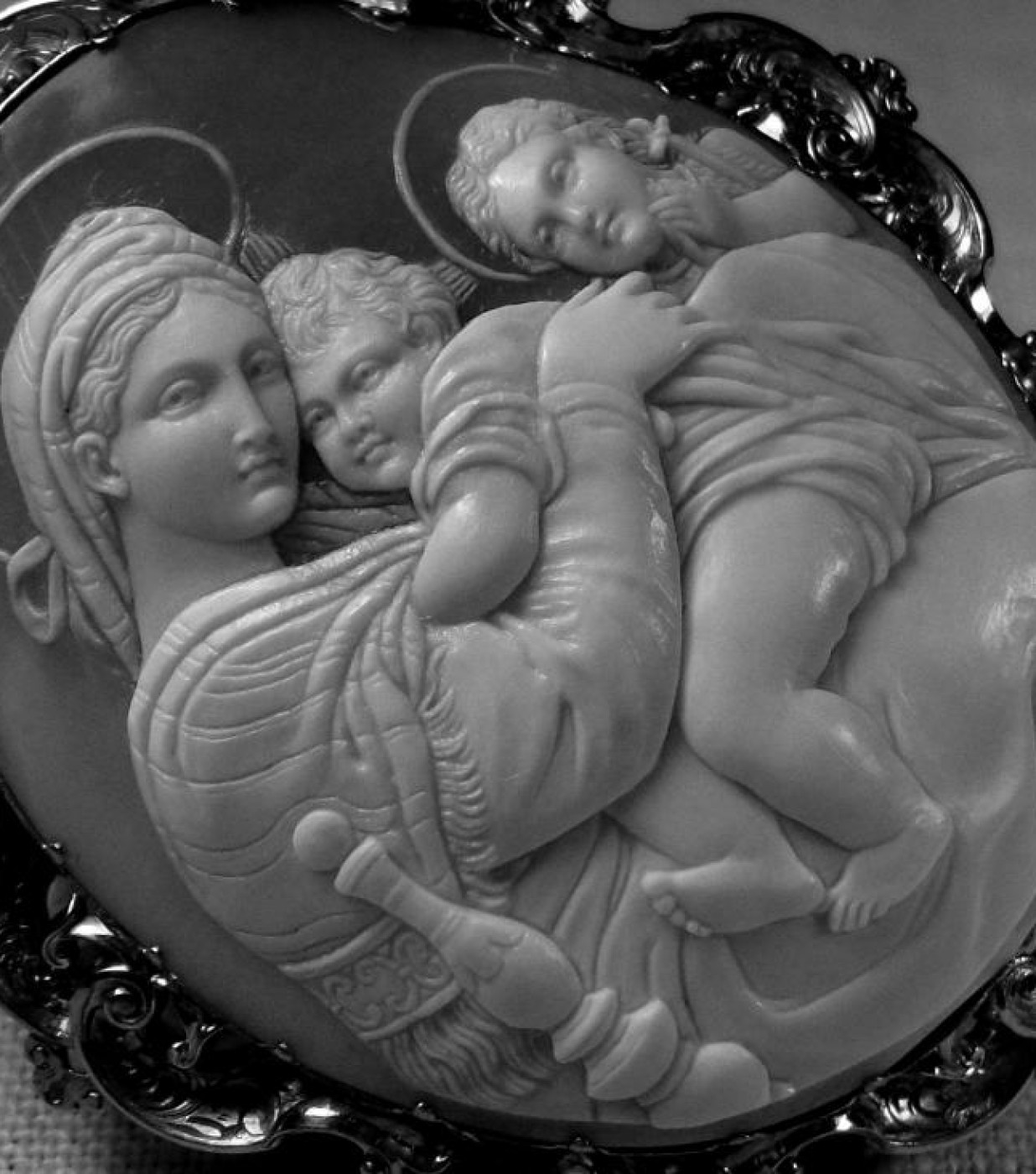 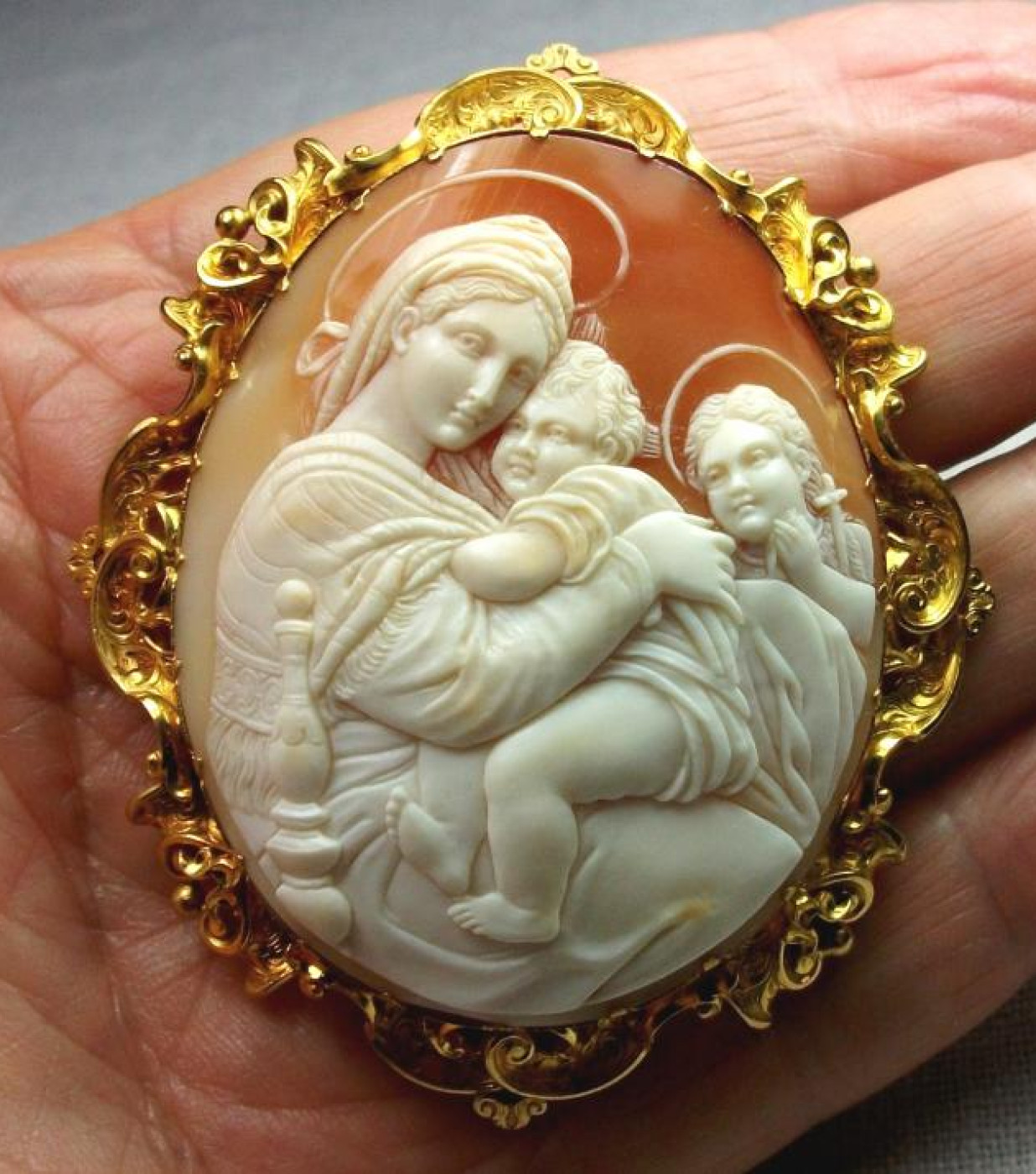 This is a Museum Quality cameo depicting the Madonna of the Chair, after Raphael.  This is an incredible work of art, avery detailed cameo, carved by an artist. Carving is three dimensional and appears just it was a sculpture. Look at the details of this cameo. The decoration on the scarf worn by the Madonna, and the one she is wearing on her head. Look at how the chair is carved. Her expression is serious but you can see happiness in her eyes and look at how the baby Jesus sits on her legs and embraces her. Look at Jesus' body, at his plump legs, just like the legs of a baby, look at his foot, there are no words to describe all the beauty of this cameo. The young St. John is praying and look at his little and puffy hands which are superbly carved.The carver made an artwork reproducing it from another one,  Raphael's painting. The expression of three figures is so sweet and tender, they seem to speak, I'm amazed looking at this cameo. The master carver has reproduced Raphael's work respecting the nineteenth-century taste, with the brightness in the look of  child Jesus, the sweetness of the face of the Madonna and the prayer pose of the young Saint John, with an intense carving of expressive suggestion. The frame is gorgeous and rich, made of massive gold.  This one is without any doubt one of most beautiful Madonna of the Chair I have ever handled.  Pictures really don't give any justice to this fabulous cameo. Rarest cameo and very desirable collectors' piece.


The Madonna of the Chair is an oil painting on wood table of the diameter of cm 71 realized between 1513 and the 1514 from the Italian painter Raffaello and currently conserved in the Palatina gallery of Pitti Palace in Florence after being belonged to the Medici family then like Napoleonic plunders,  then conserved in the Louvre Museum, then in the apartment of the Empress Josephine in Saint Cloud Castle and then returned back to Florence. It is one of the most famous Raffaello's works that he realized on probable commission of the Pope Leone X. The Madonna of the Chair is so called because in this picture the Virgin is seated. She is sitting in a low chair, holding her child on her knee, and encircling him with her arms. Her head is laid tenderly against the child's, and she looks out of the picture with a tranquil, happy sense of motherly love.
The child has the rounded limbs and playful action of the feet of a healthy, warm-blooded infant, and he nestles into his mother's embrace as snugly as a young bird in its nest. But as he leans against the mother's bosom and follows her gaze, there is a serious and even grand expression in his eyes which Raphael and other painters always sought to give to the child Jesus to mark the difference between him and common children.
By the side of the Madonna is the child who is to grow up as St. John the Baptist. He carries a reed cross, as if to herald the death of the Saviour; his hands are clasped in prayer, and though the other two look out of the picture at us, he fixes his steadfast look on the child, in ardent worship.
Around each of the heads is very faintly seen a nimbus, as it is called; that is, the old painters were wont to distinguish sacred persons by a circle about the head. Sometimes, as here, the circle is a golden line only; sometimes it is a gold band almost like a plate against which the head is set. This circular form took the name Nimbus from the Latin word for a cloud, as if the heads of sacred persons were in an unearthly surrounding. It is also called a halo. Such a representation is a symbol or sign to indicate those higher and more mysterious qualities which are beyond the artist's power to portray.
This simple composition is a perfect round, and if one studies it attentively one will see how curved and flowing are all the lines within the circle; even the back of the chair, though perpendicular, swells and curves into roundness. It is by such simple means as this that the painter gives pleasure to the eye. The harmony of the lines of the composition makes a perfect expression of the peaceful group centred thus about the divine child.