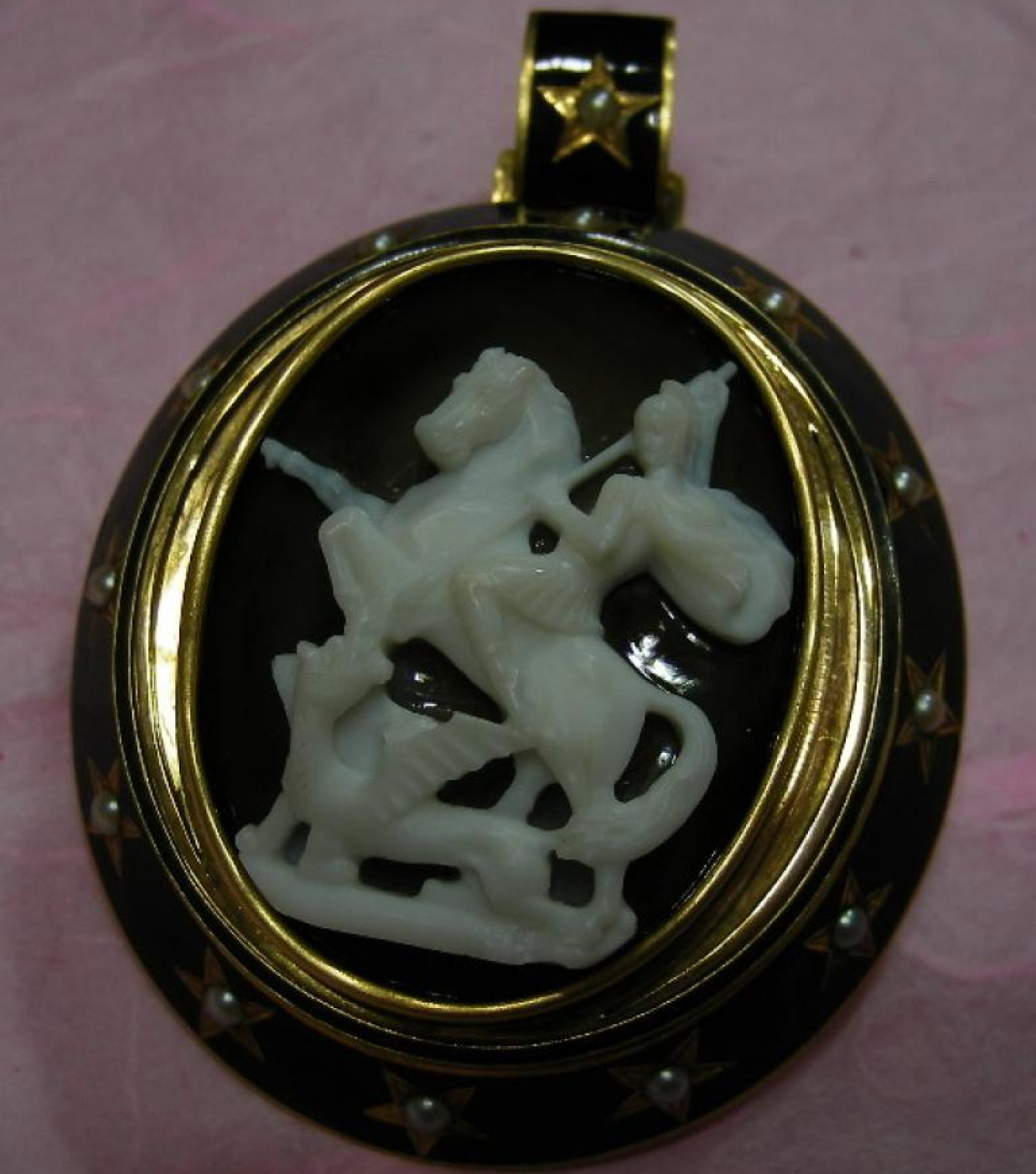 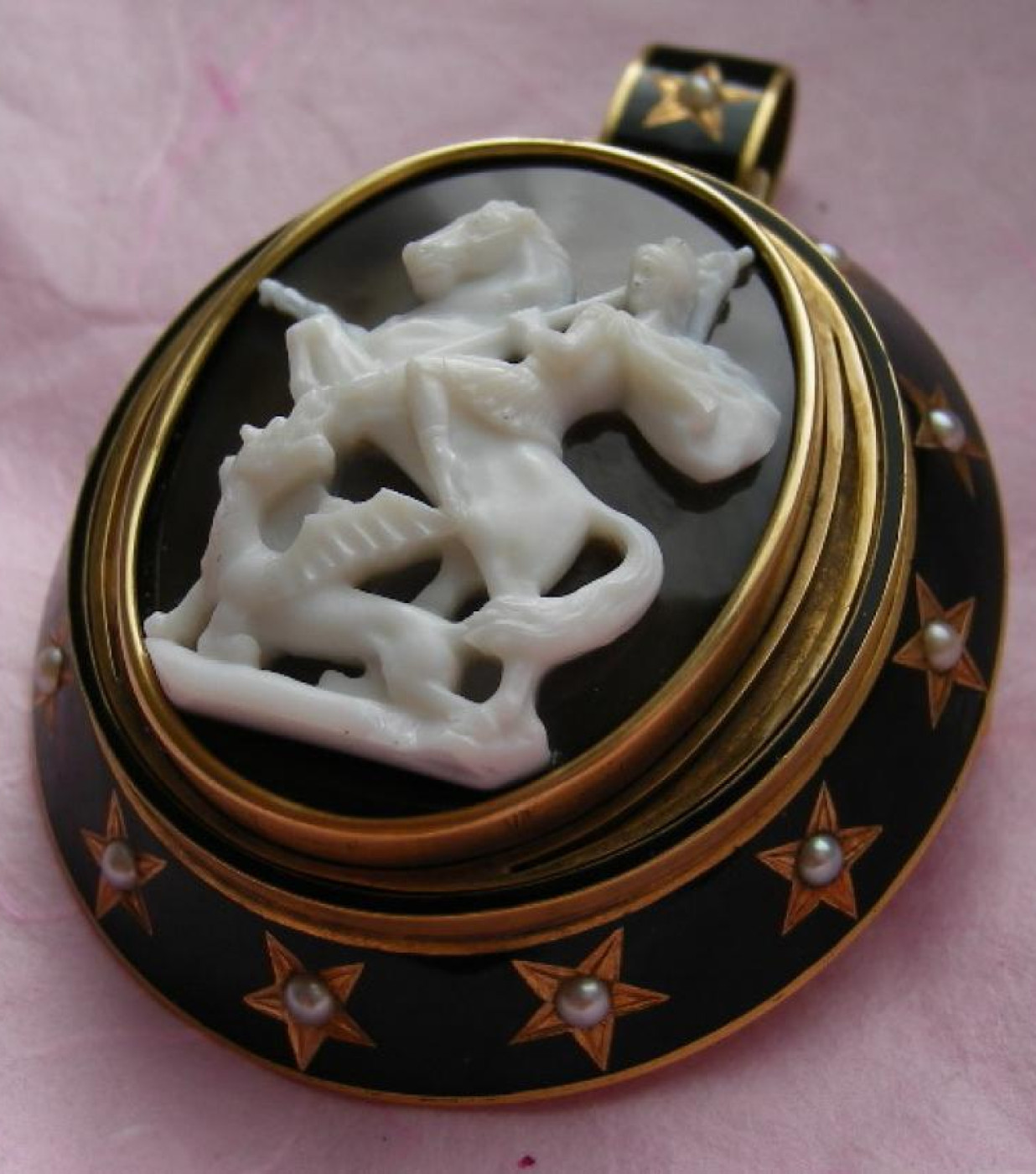 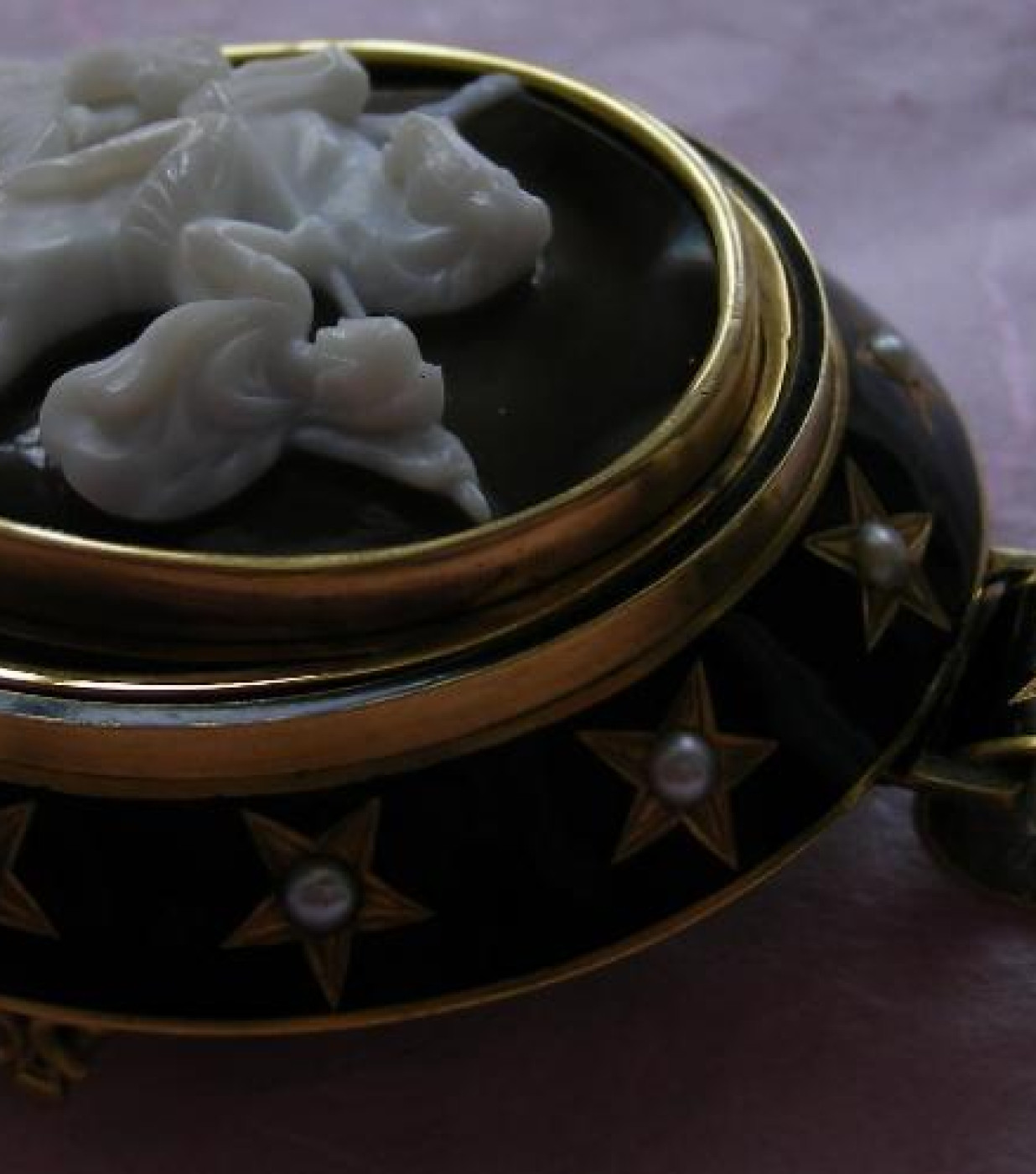 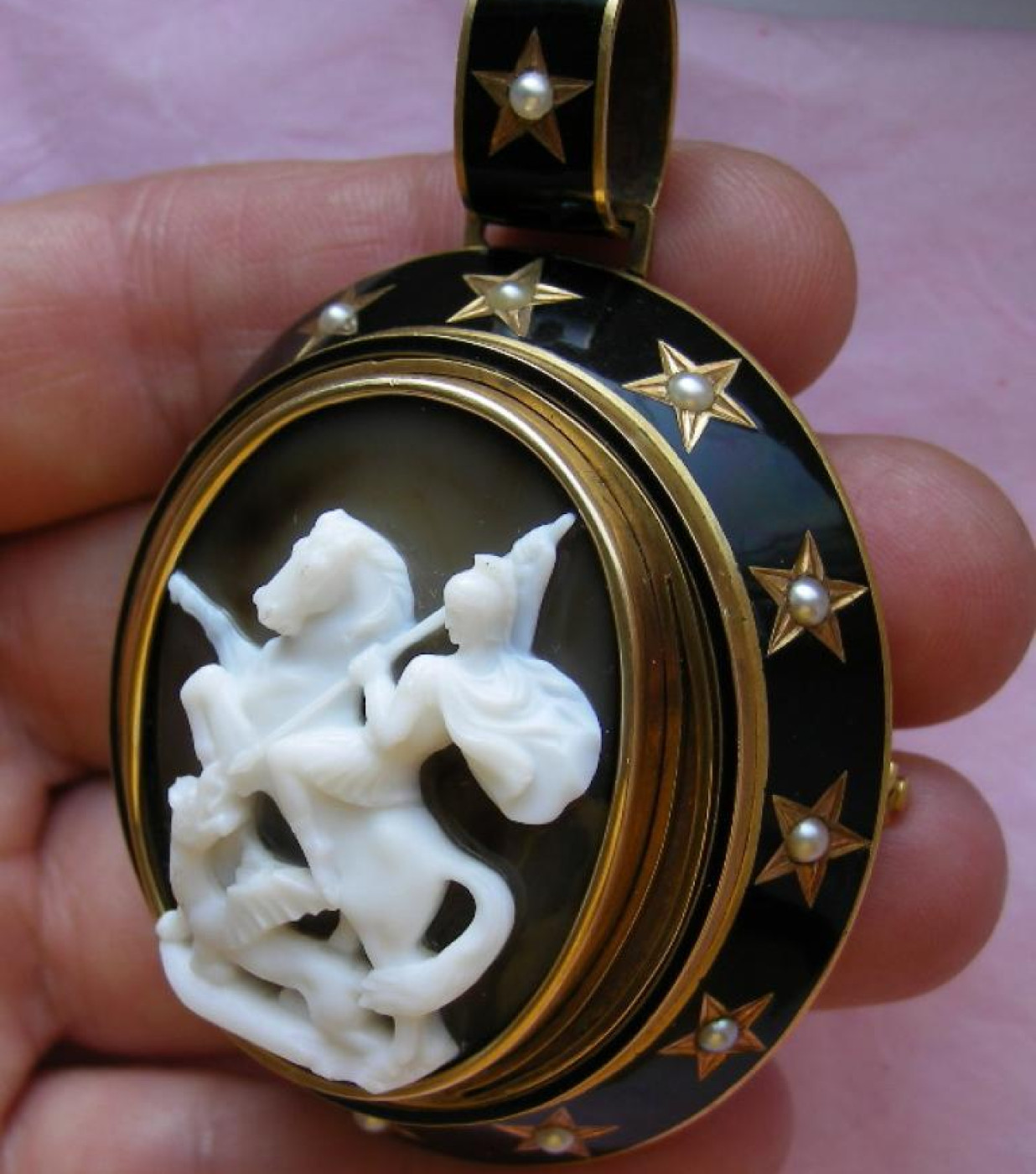 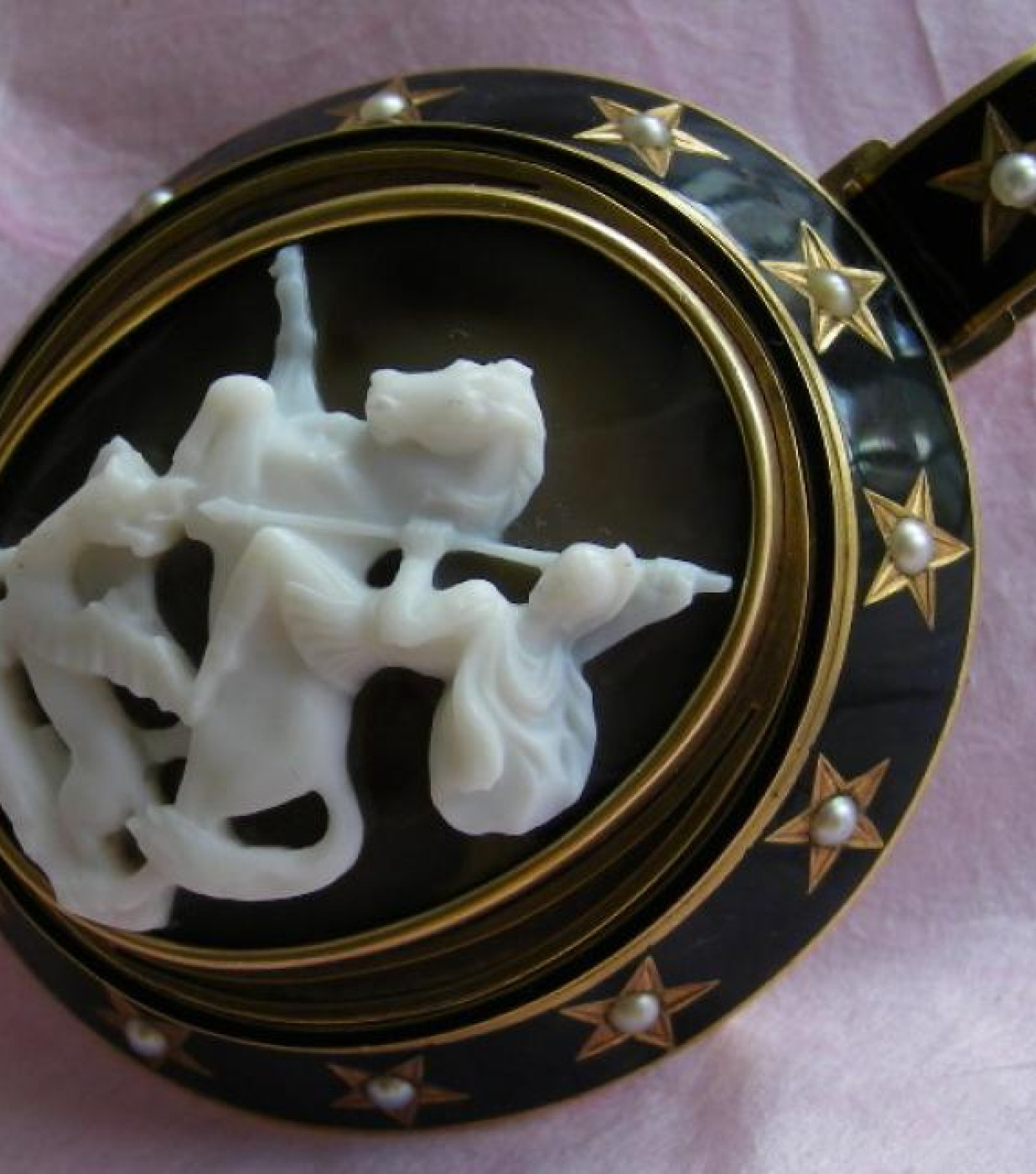 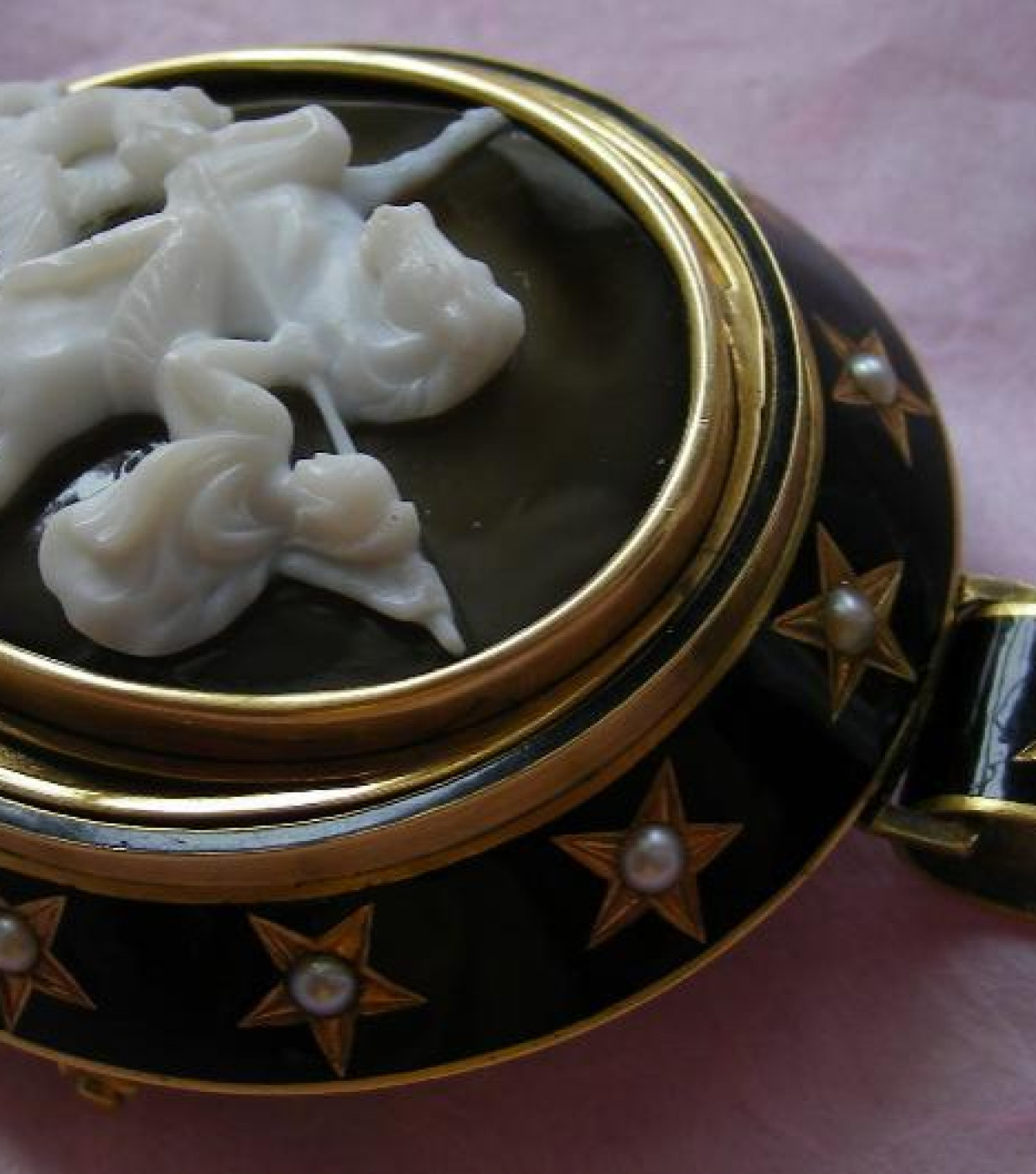 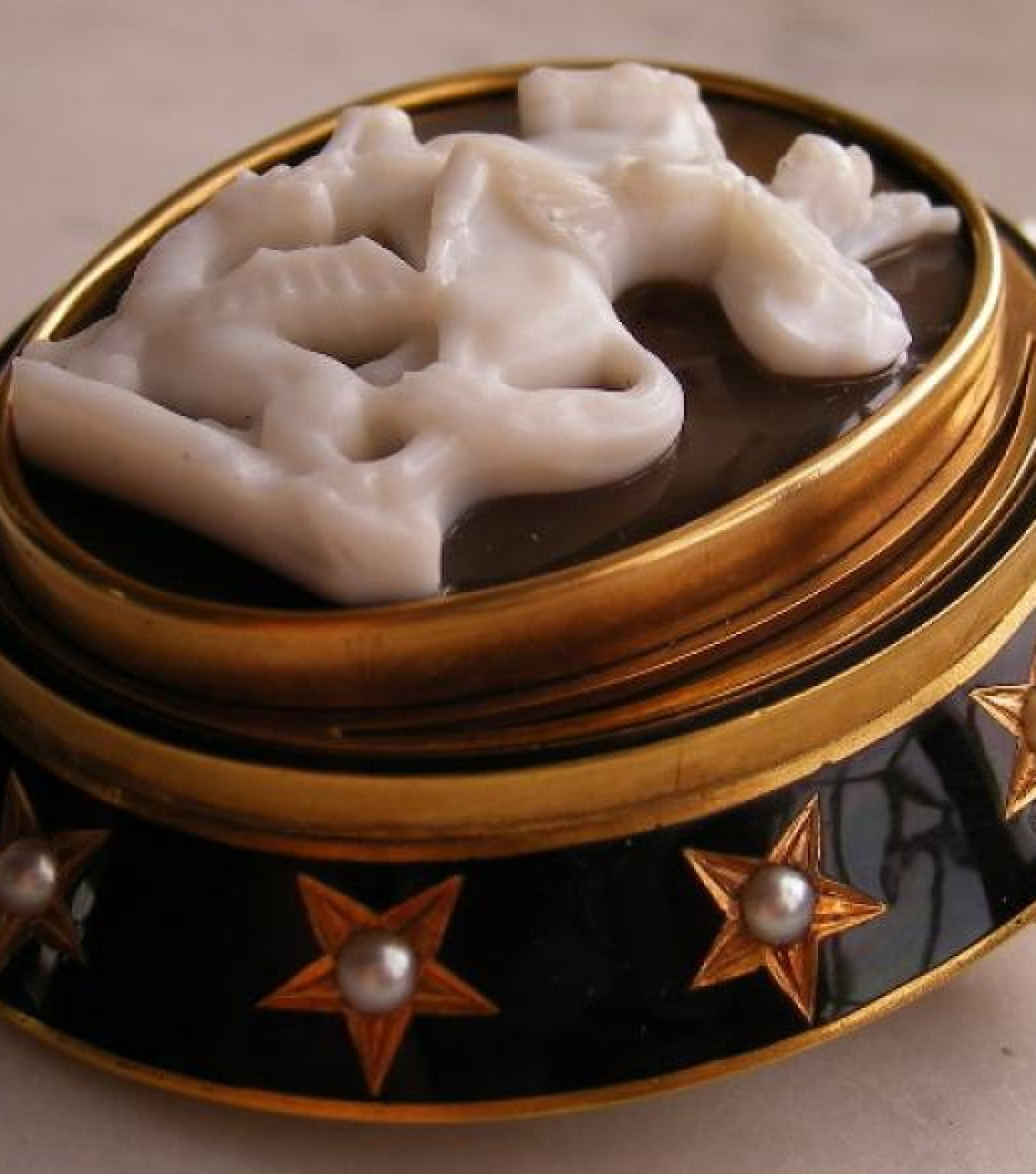 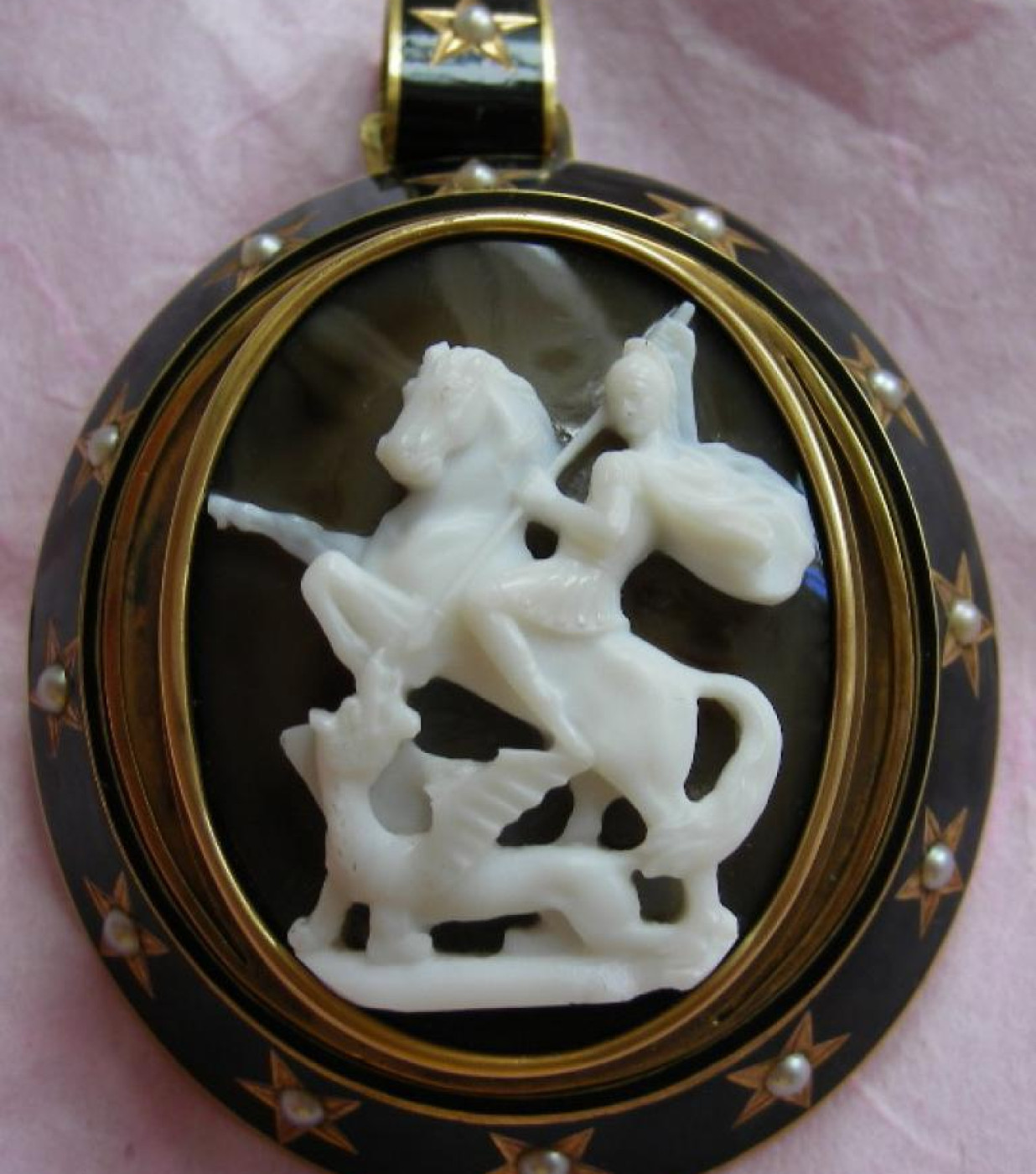 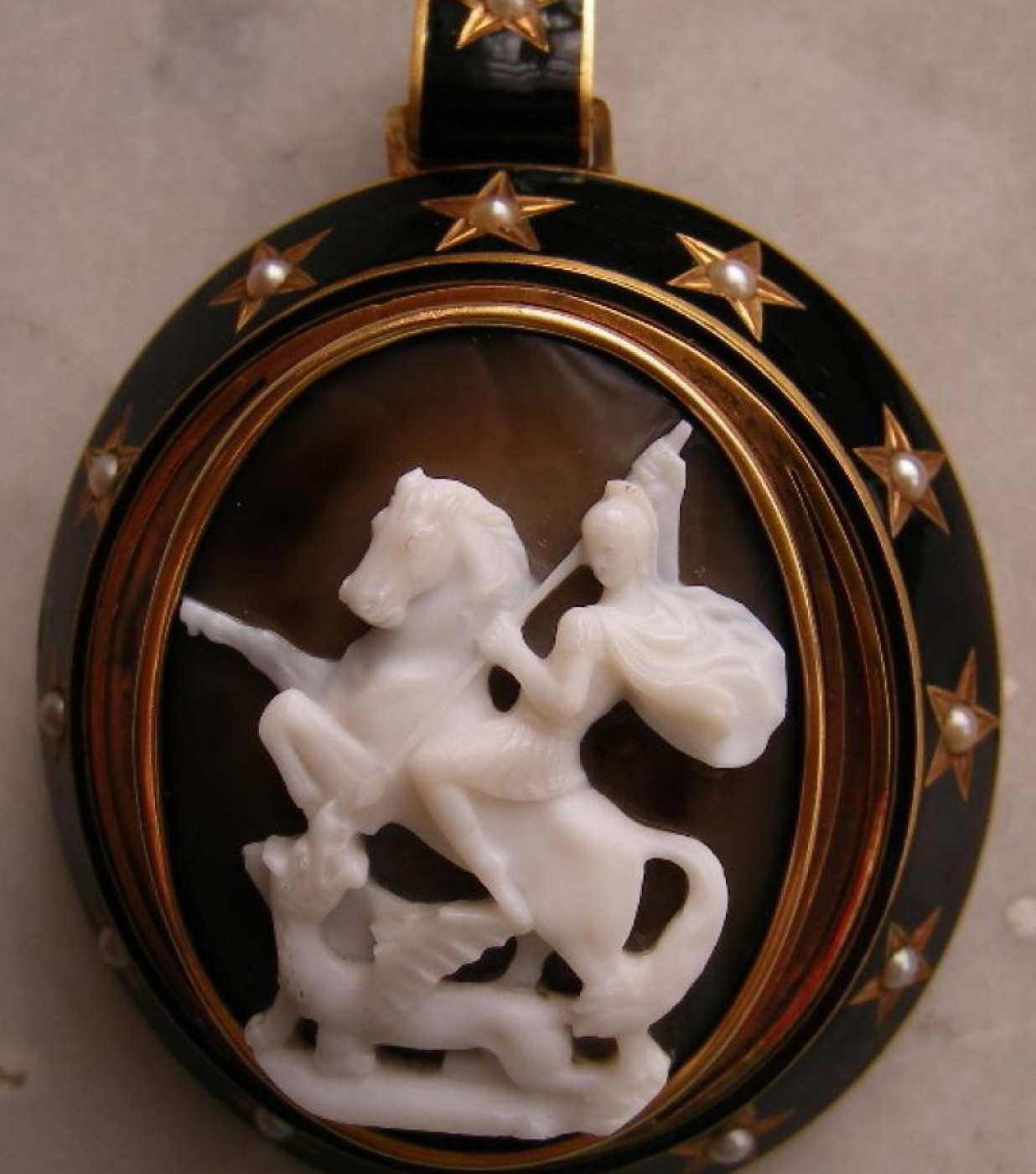 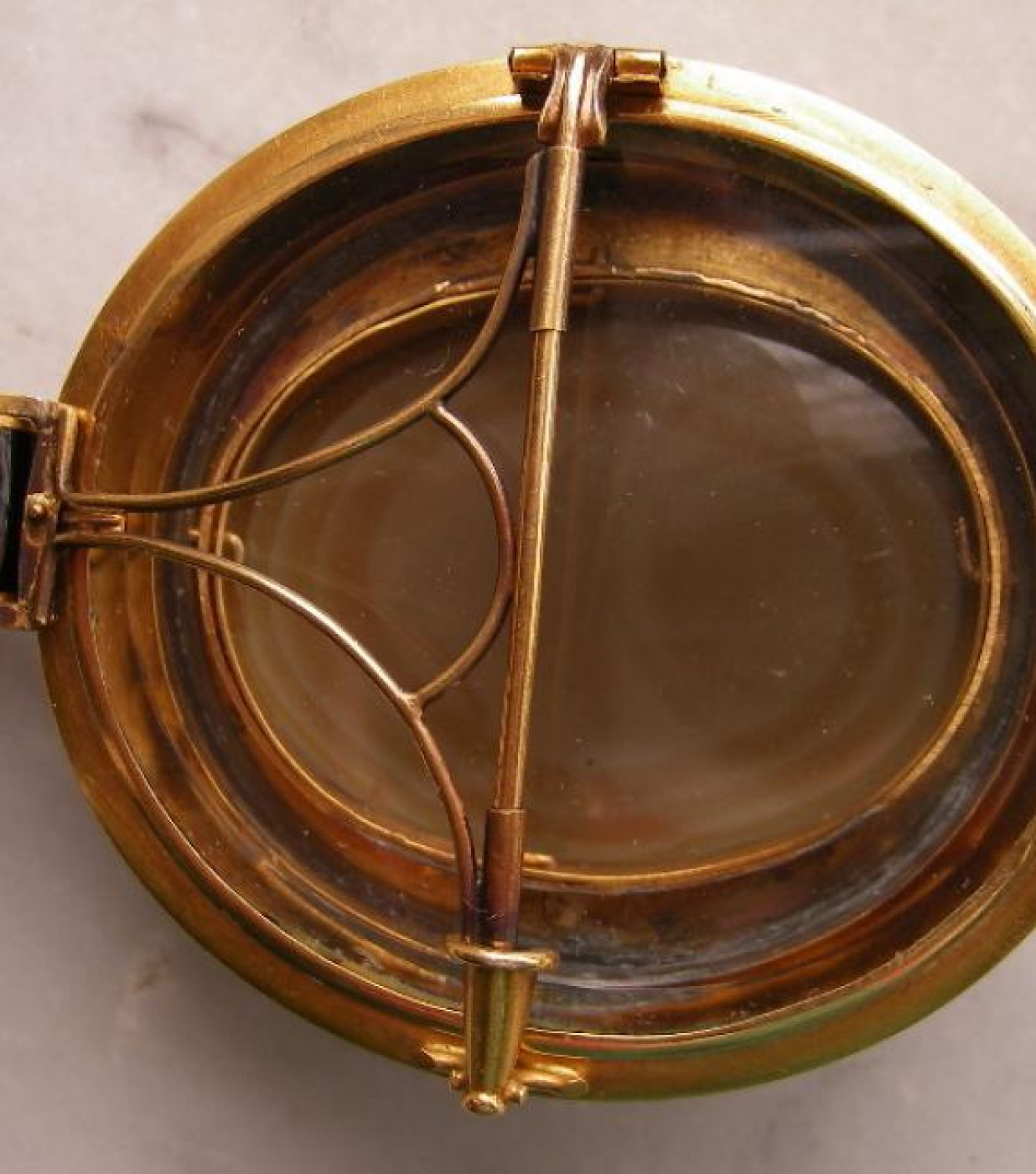 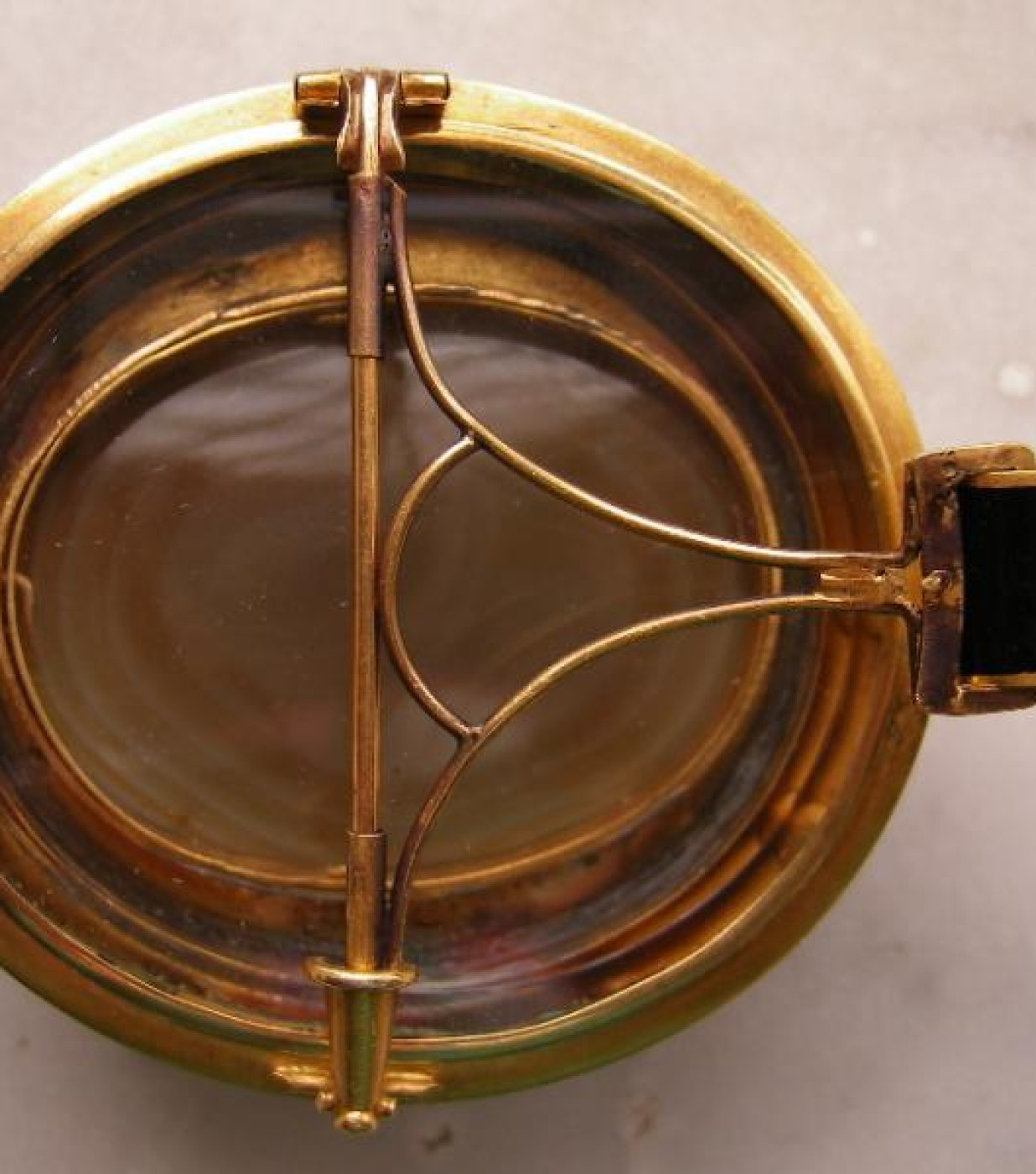 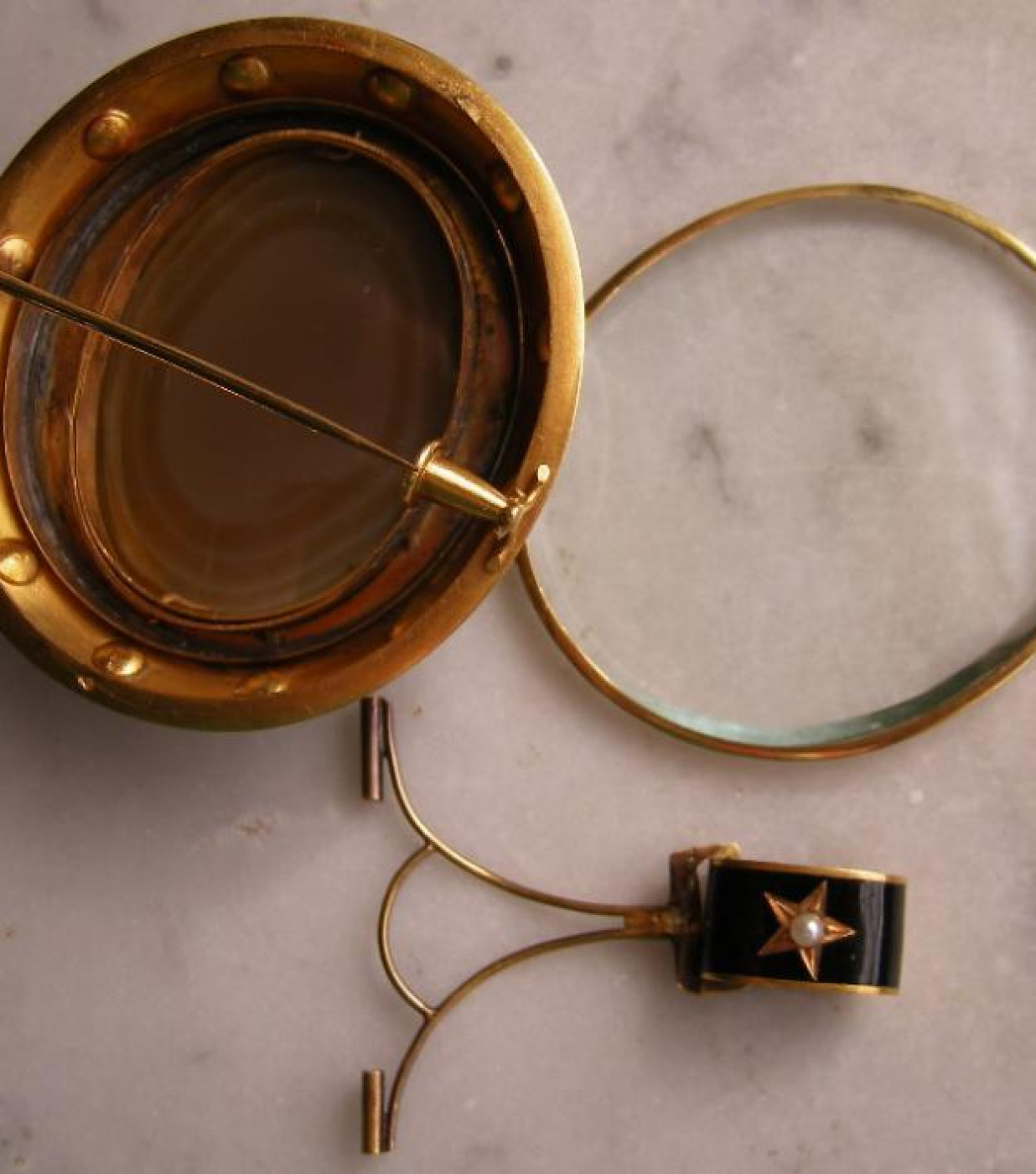 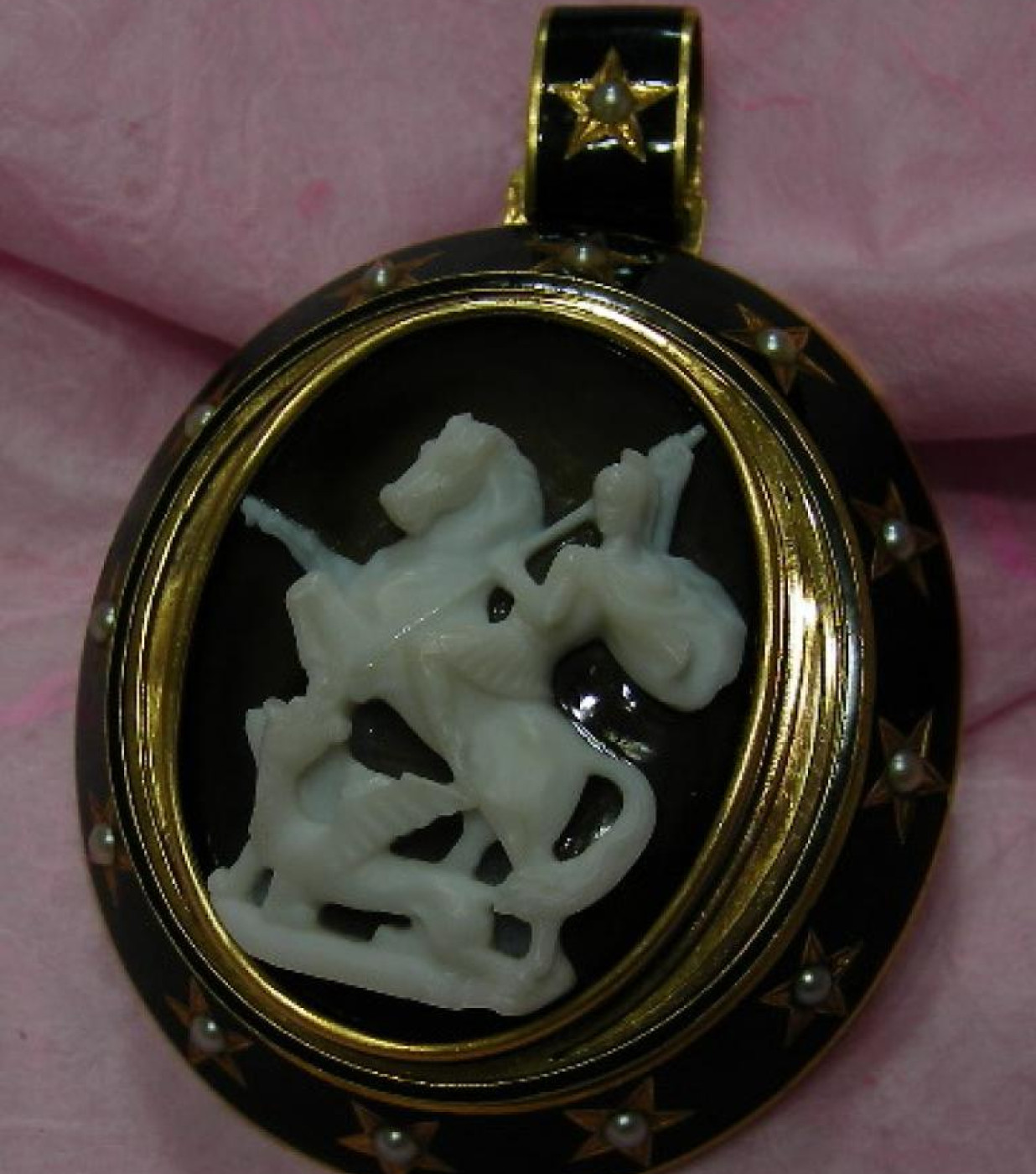 Museum Quality and huge cameo depicting Saint George slaying the dragon. This cameo is from Biedermeier era.
In Central Europe, Biedermeier refers to work in the fields of literature, music, the visual arts and interior design and, of course, jewellery in the period between the years 1815 Vienna Congress, the end of the Napoleonic Wars, and 1848, the year of the European revolutions and contrasts with the Romantic era which preceded it. The Biedermeier style was a simplified interpretation of the influential French Empire Style of Napoleon I. He introduced the romance of ancient Roman Empire styles. So following the Biedermeier style this cameo has not too many details carved. Even the frame, though it is wonderful, is not much elaborated as cameo's frames of the Victorian era. The cameo has a glass locket on the back, it was used to put picture or hair of a beloved one.
Please look at the hard stone background, there are so many spectacular shades of color and the white of the carving junp out of the background for almost 2/8". The facial features, because of the strong contrast with the dark background, are not well shown in the pictures, but the cameo is not worn, instead looking at it I'm able to see the facial features of Saint George and all the other details.  This piece is very particular even for the clasp on the back that permit to wear it as a pendant or as a brooch, removing completely the bale. Look at the pictures to see how it works.
This subject really  jumps out fro/m the hard stone,  This is one of most beautiful Saint George I have ever seen, the pictures speak by themselves. The frame is spectacular too, wonderful. This is another masterly carved cameo. A very desirable collectors piece, rare and highest quality cameo.
A bit of History:
According to the Golden Legend the narrative episode of Saint George and the Dragon took place in a place he called Silene, in Libya. There was no such place, the name being perhaps a corruption of Cyrene. The Golden Legend is the first to place this legend in Libya, as a sufficiently exotic locale, where a dragon might be imagined. This town had a pond large as a lake where a plague-bearing dragon dwelled that envenomed all the countryside. To appease the dragon, the people of Silene used to feed it a sheep every day, and when the sheep failed, they fed it their children, chosen by lottery. It happened that the lot fell on the king's daughter. The king, distraught with grief, told the people they could have all his gold and silver and half of his kingdom if his daughter were spared; the people refused. The daughter was sent out to the lake, decked out as a bride, to be fed to the dragon. Saint George by chance rode past the lake. The princess, trembling, sought to send him away, but George vowed to remain. The dragon reared out of the lake while they were conversing. Saint George fortified himself with the Sign of the Cross charged it on horseback with his lance and gave it a grievous wound. Then he called to the princess to throw him her girdle and put it around the dragon's neck. When she did so, the dragon followed the girl like a meek beast on a leash. She and Saint George led the dragon back to the city of Silene, where it terrified the people at its approach. But Saint George called out to them, saying that if they consented to become Christians and be baptised he would slay the dragon before them. The king and the people of Silene converted to Christianity, George slew the dragon, and the body was carted out of the city on four ox-carts. "Fifteen thousand men baptized, without women and children." On the site where the dragon died, the king built a church to the Blessed Virgin Mary and Saint George, and from its altar a spring arose whose waters cured all disease Traditionally, the lance with which St. George slew the dragon was called Ascalon, a name recalling the city of Ashkelon, Israel. From this tradition, the name Ascalon was used by Winston Churchill for his personal aircraft during World War II (records at Bletchley Park), since St. George is the Patron Saint of England.