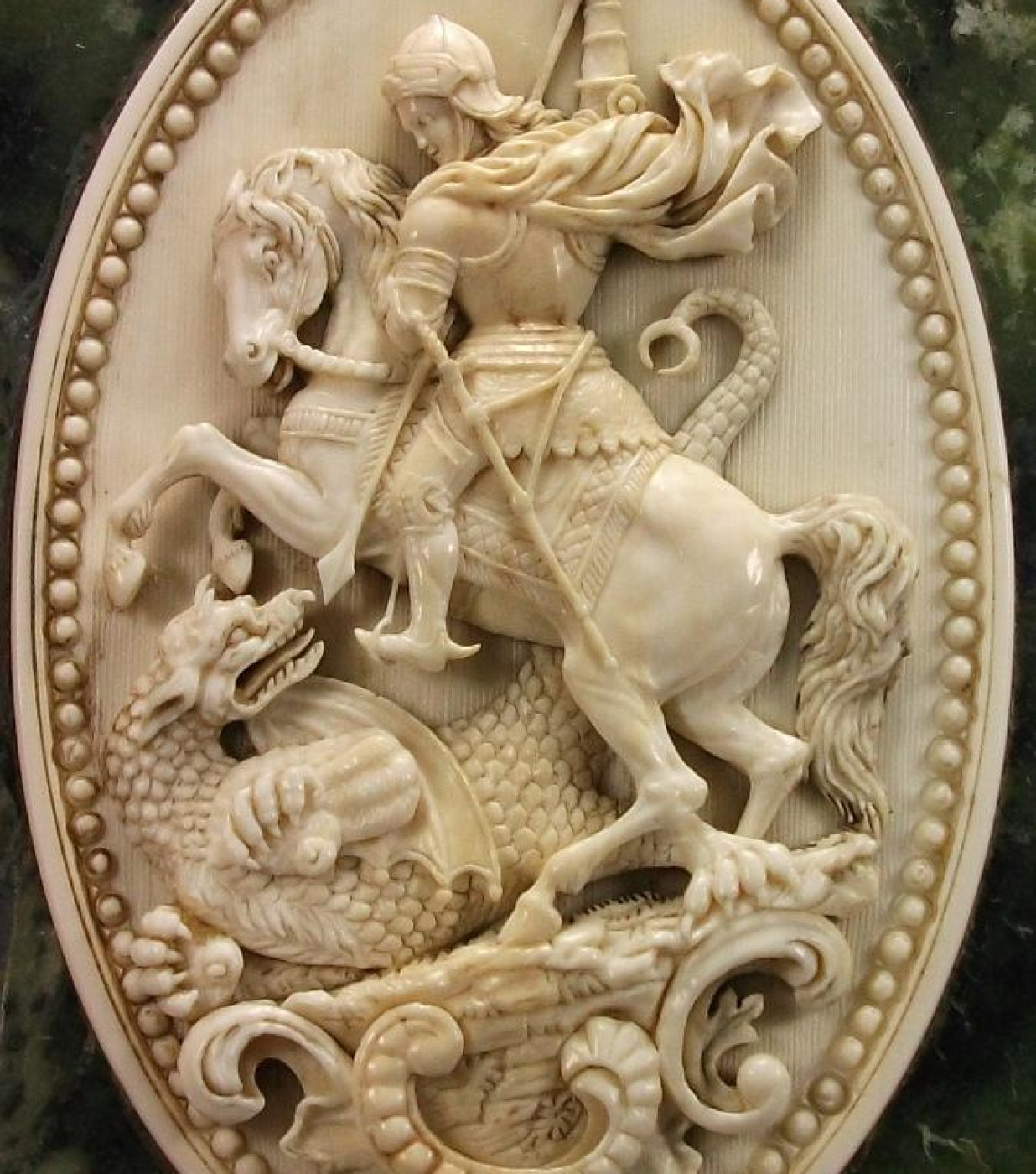 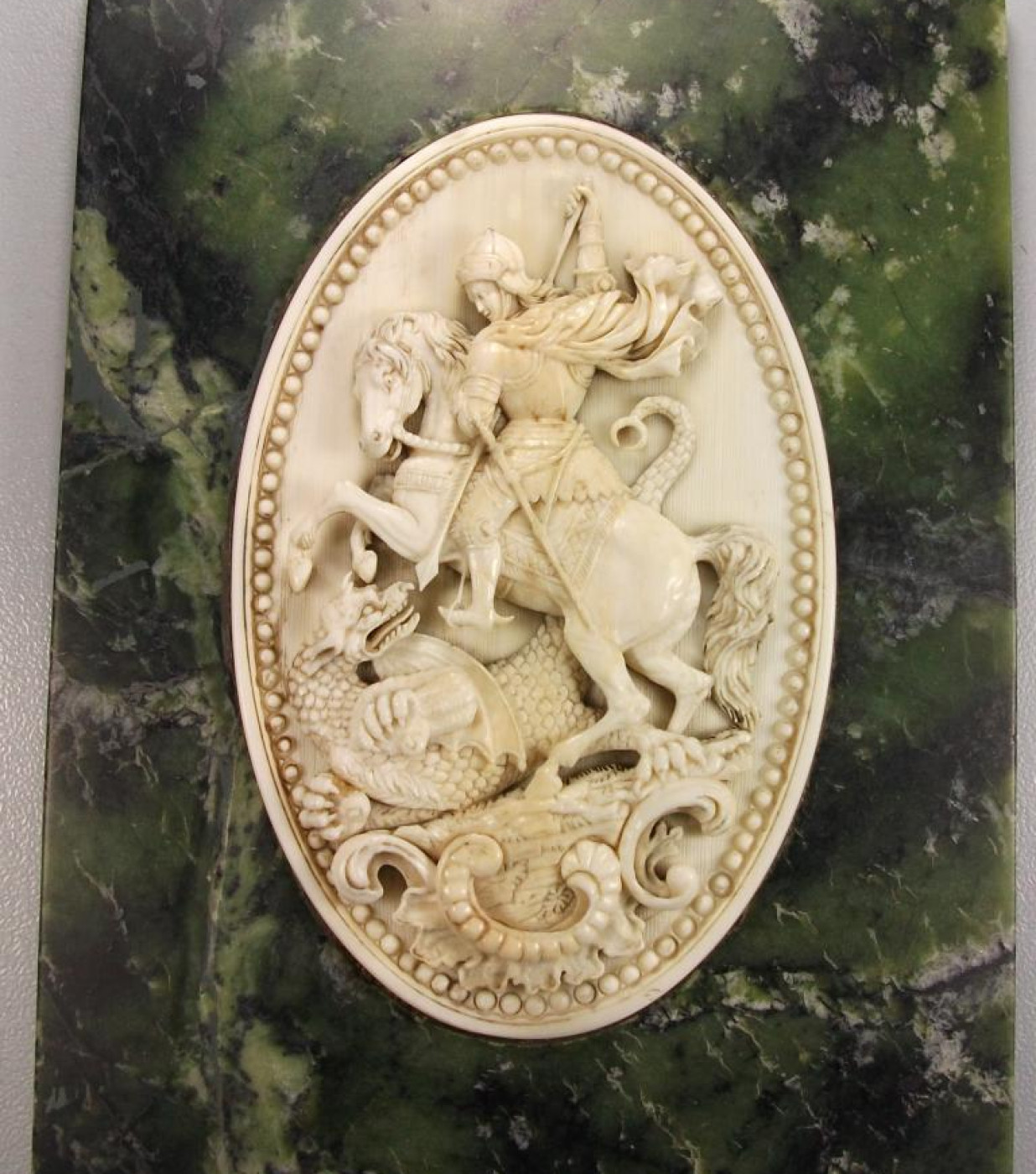 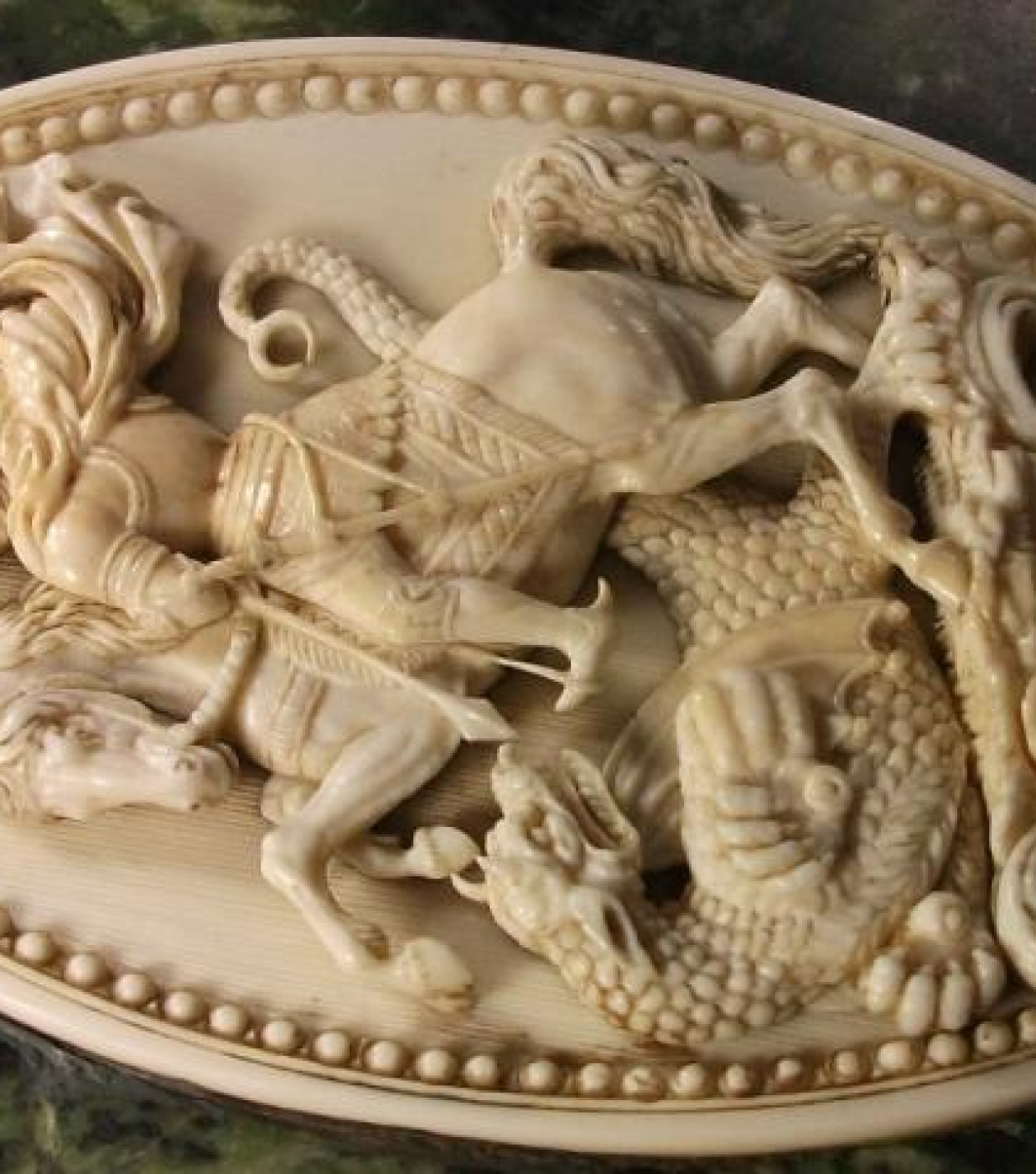 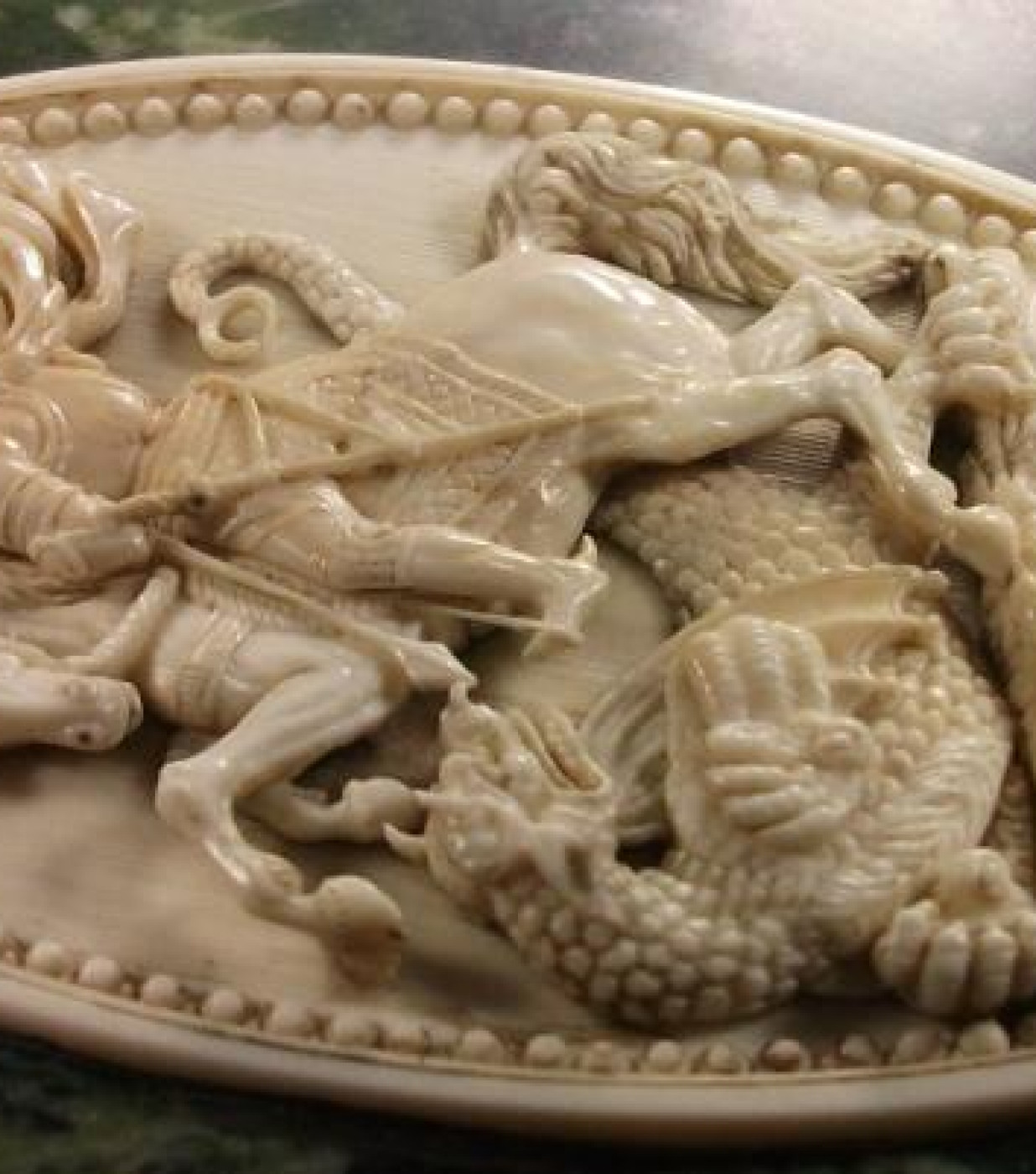 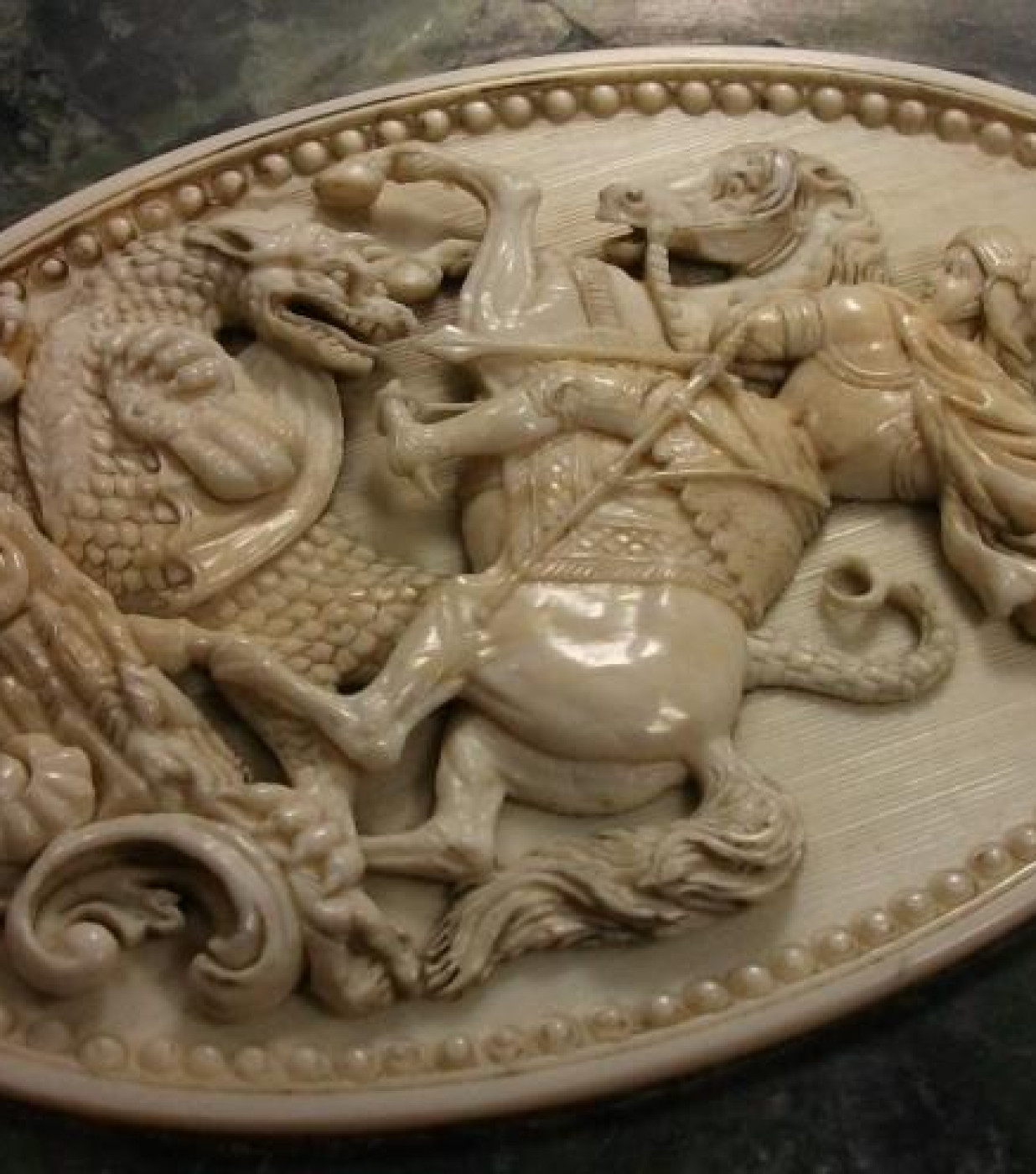 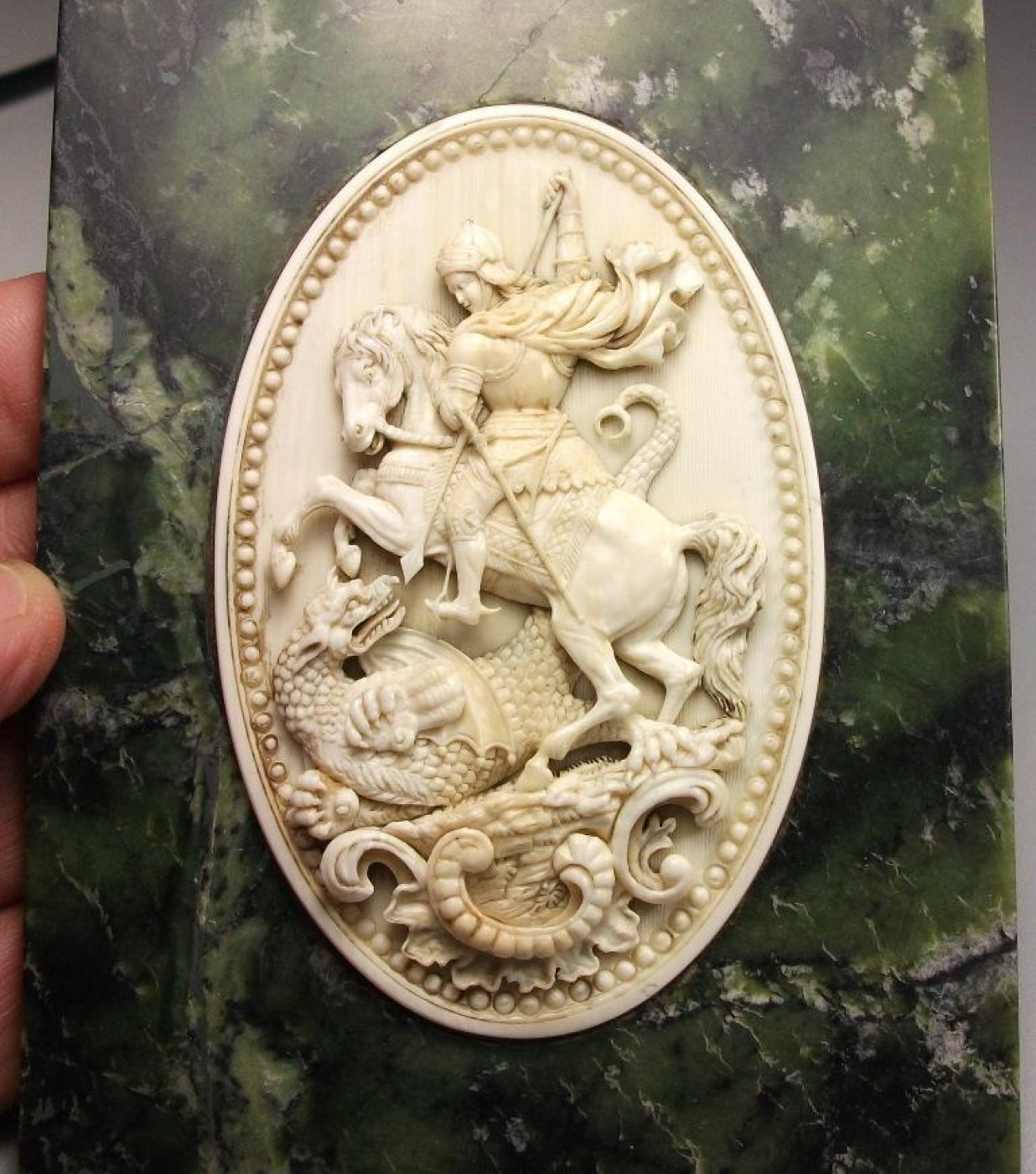 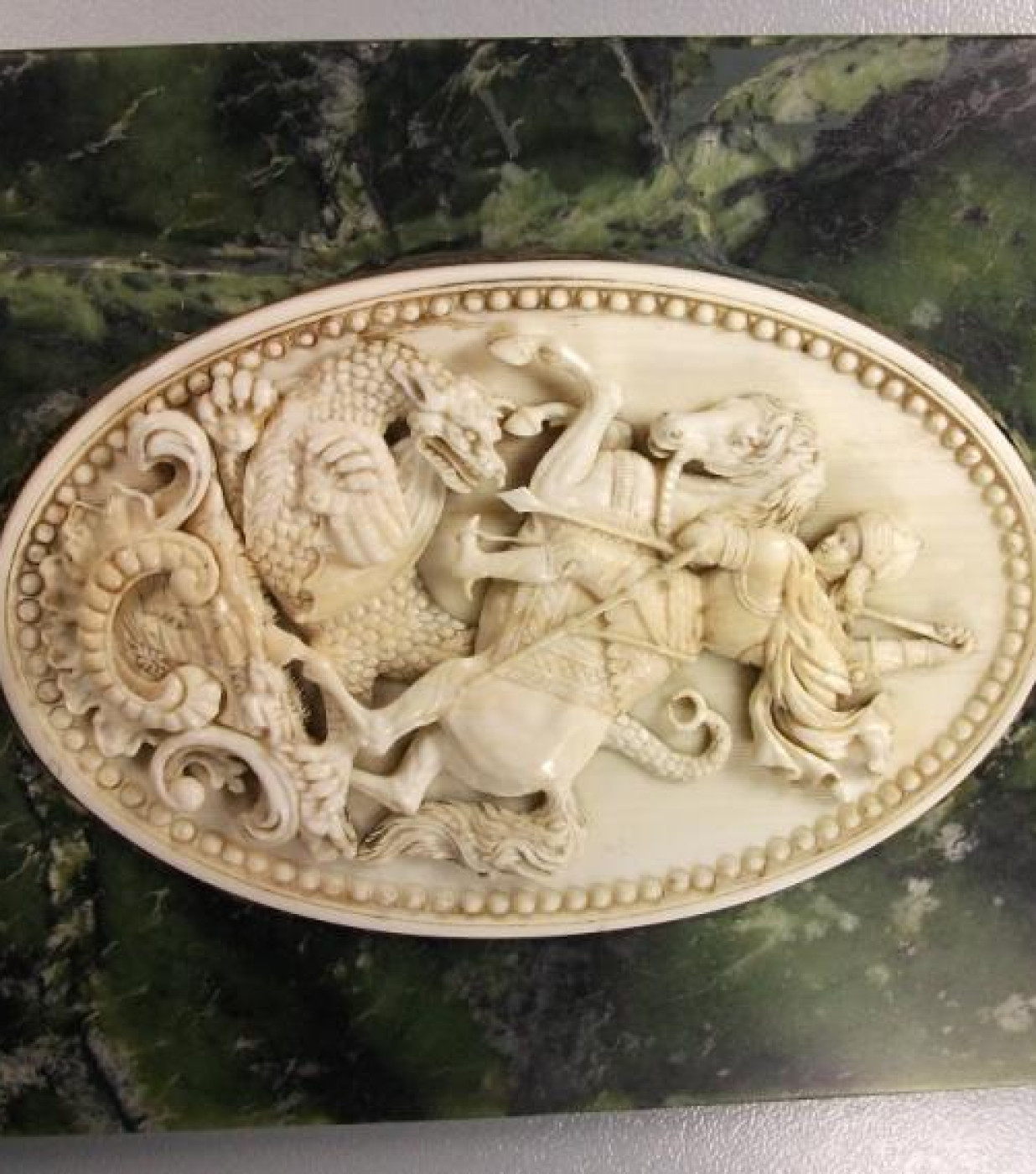 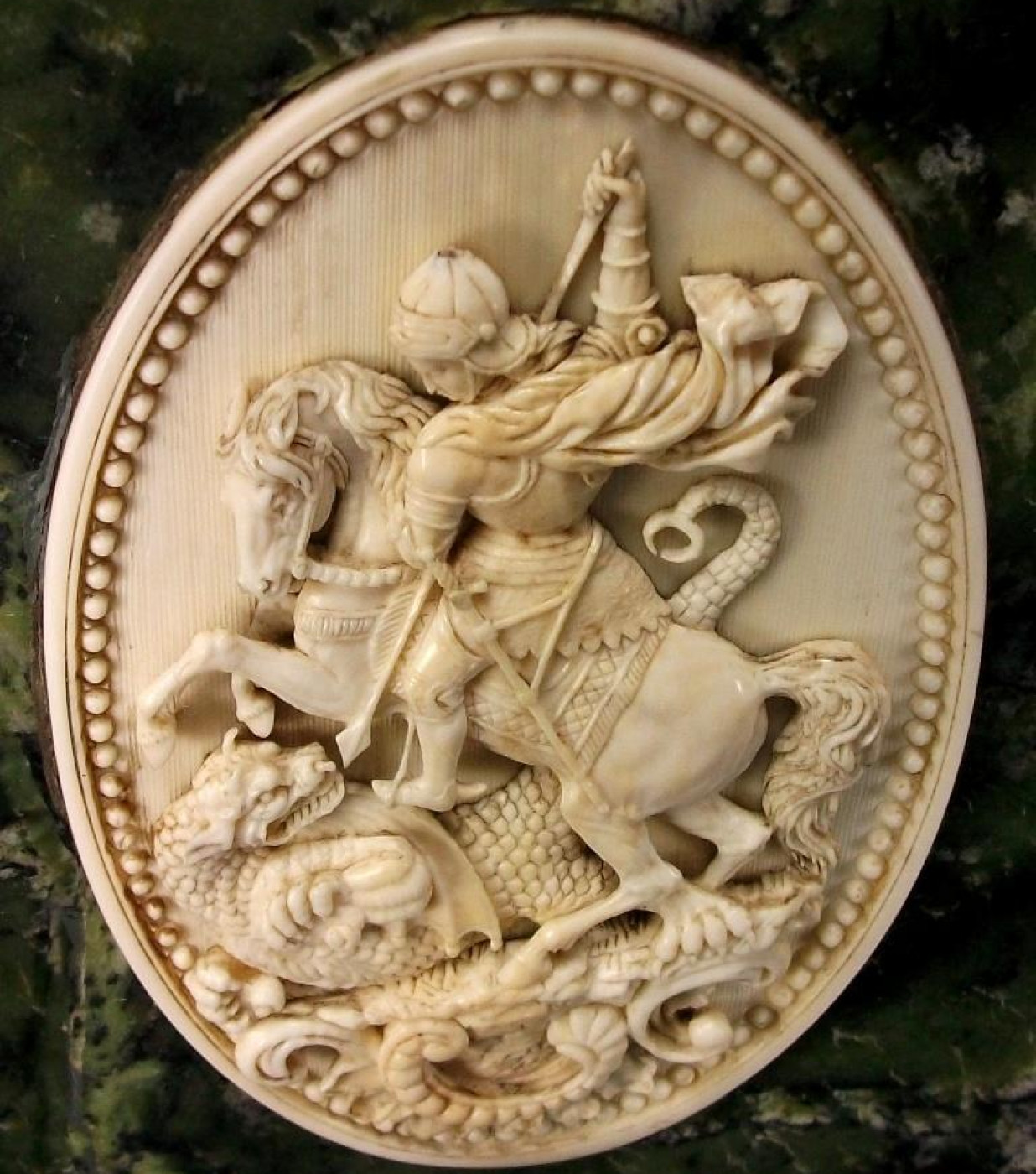 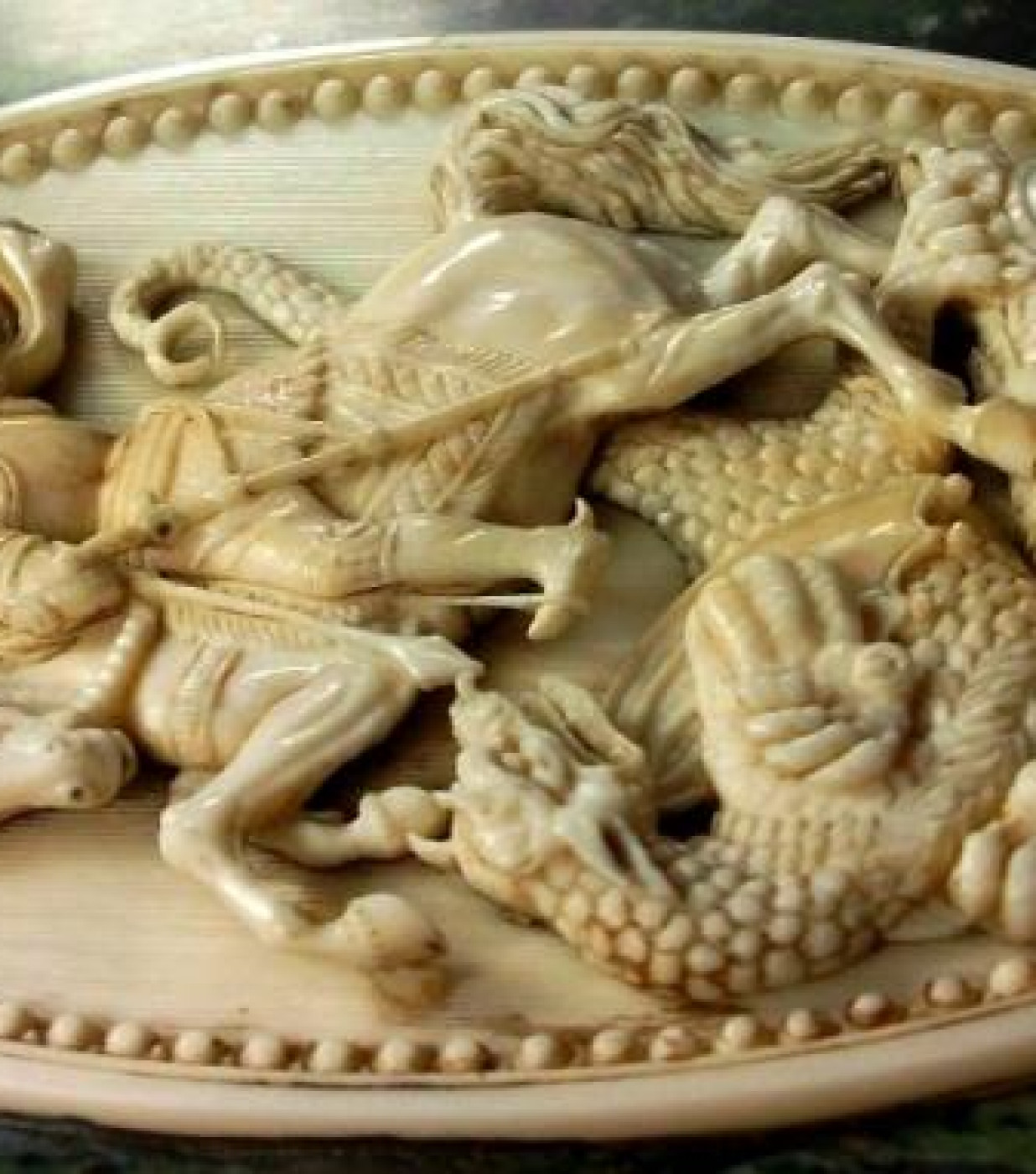 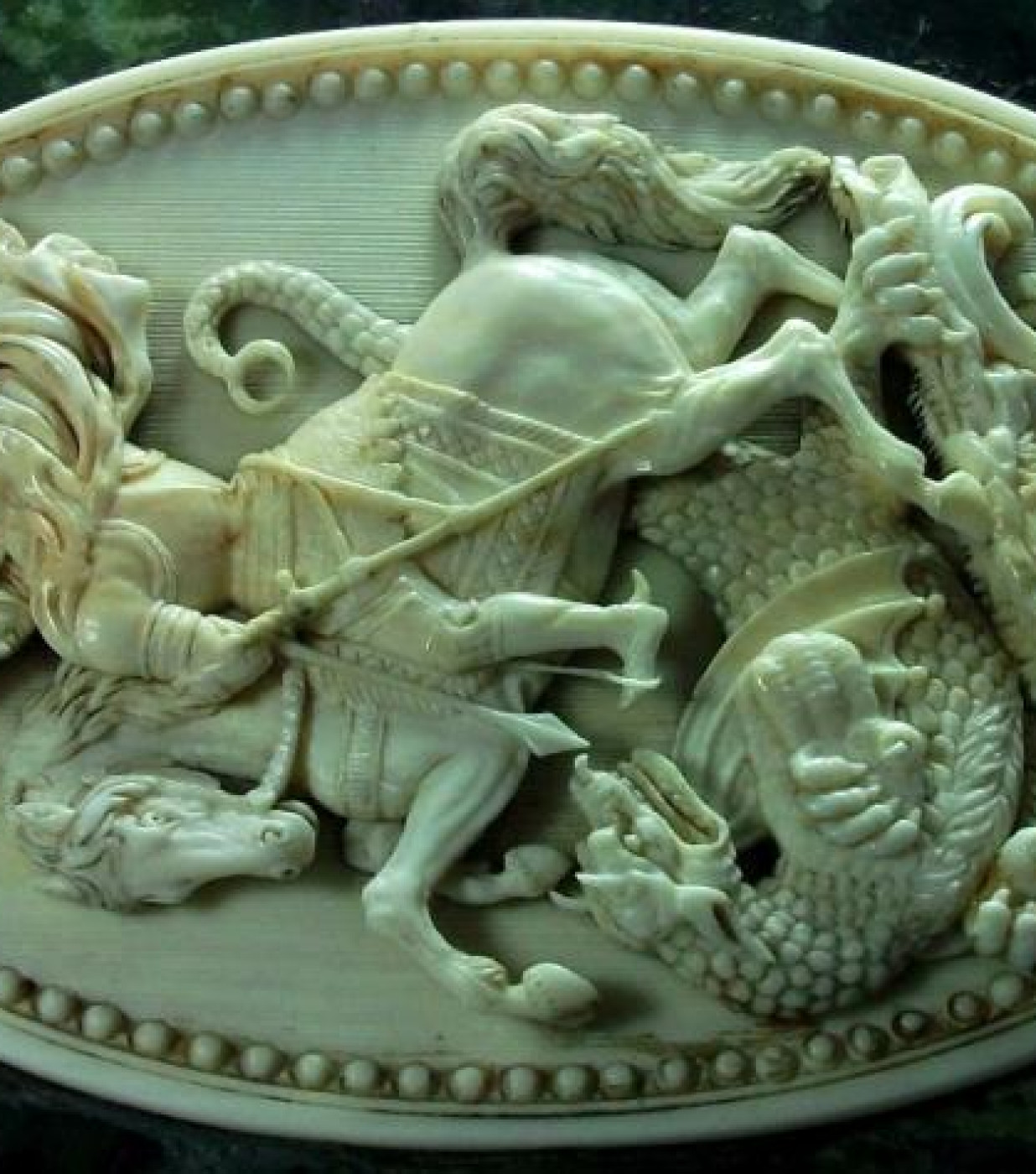 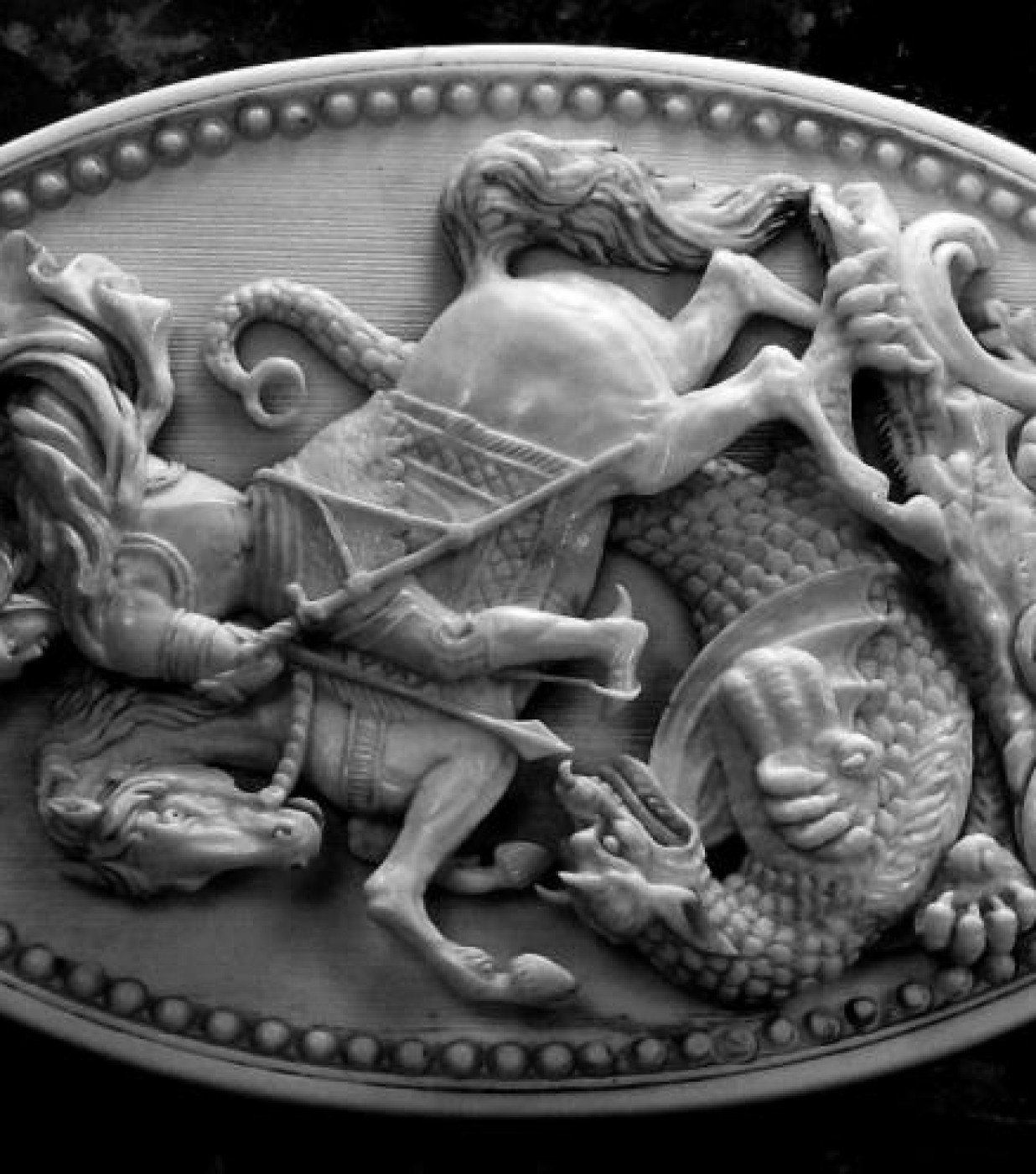 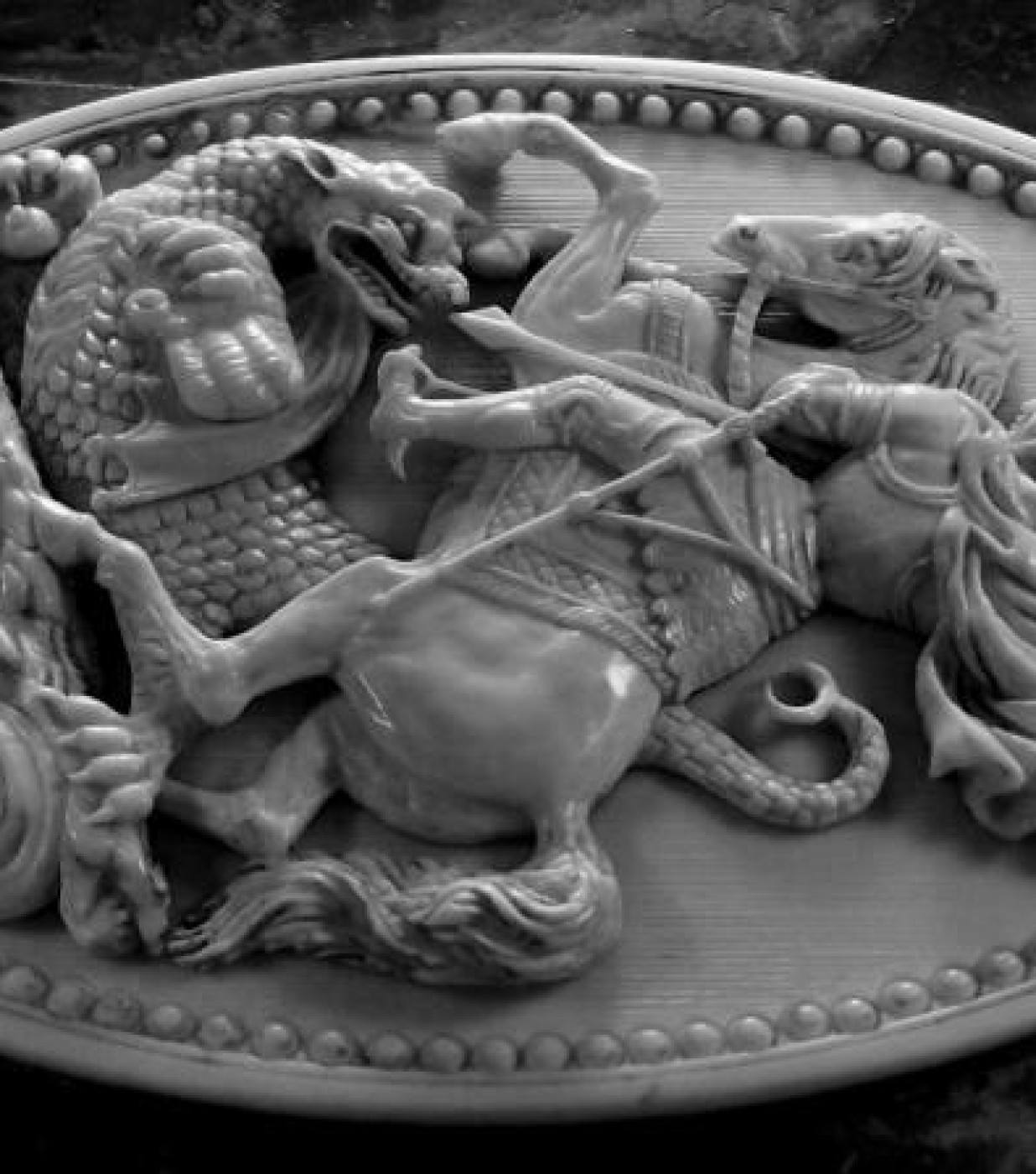 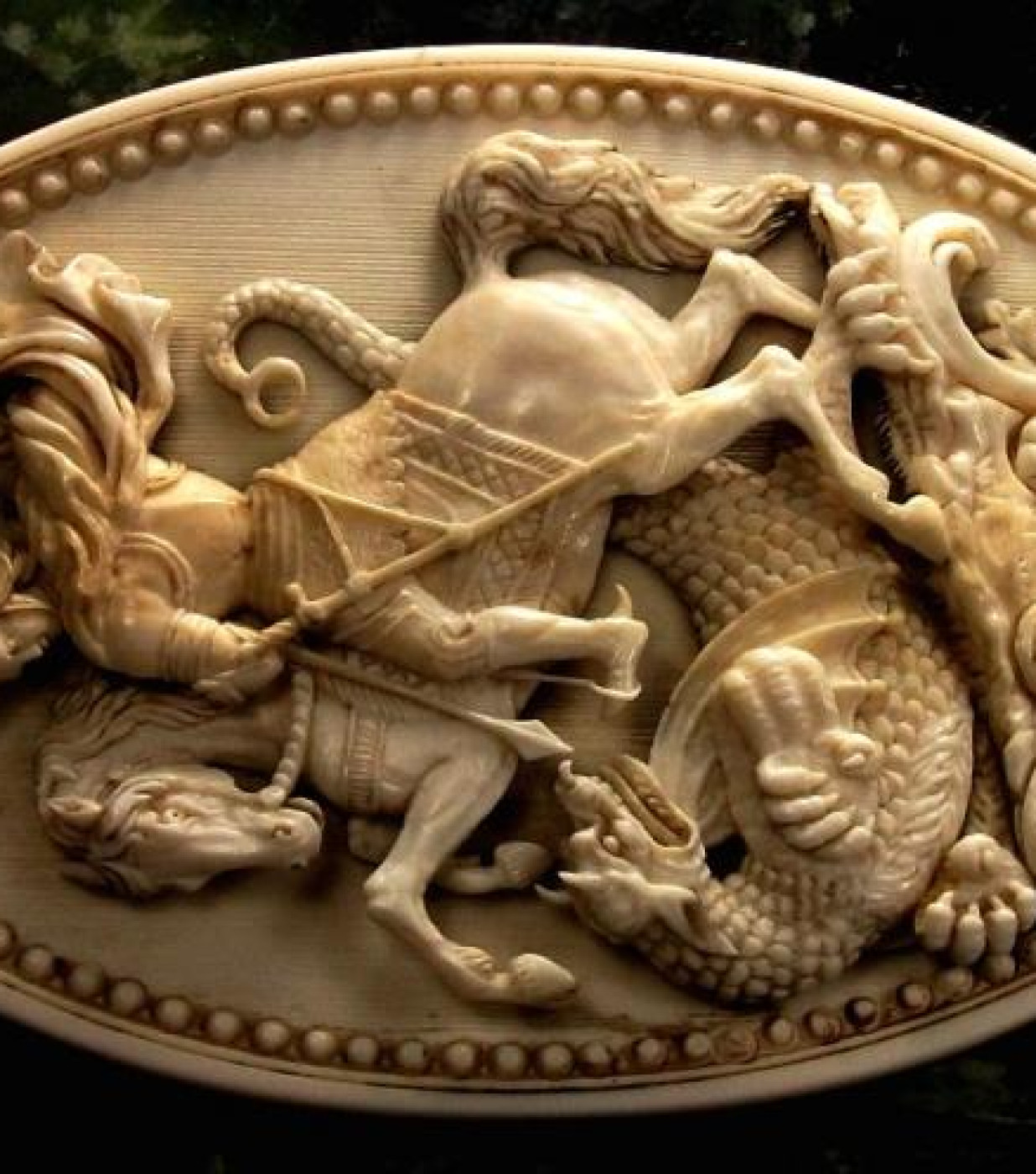 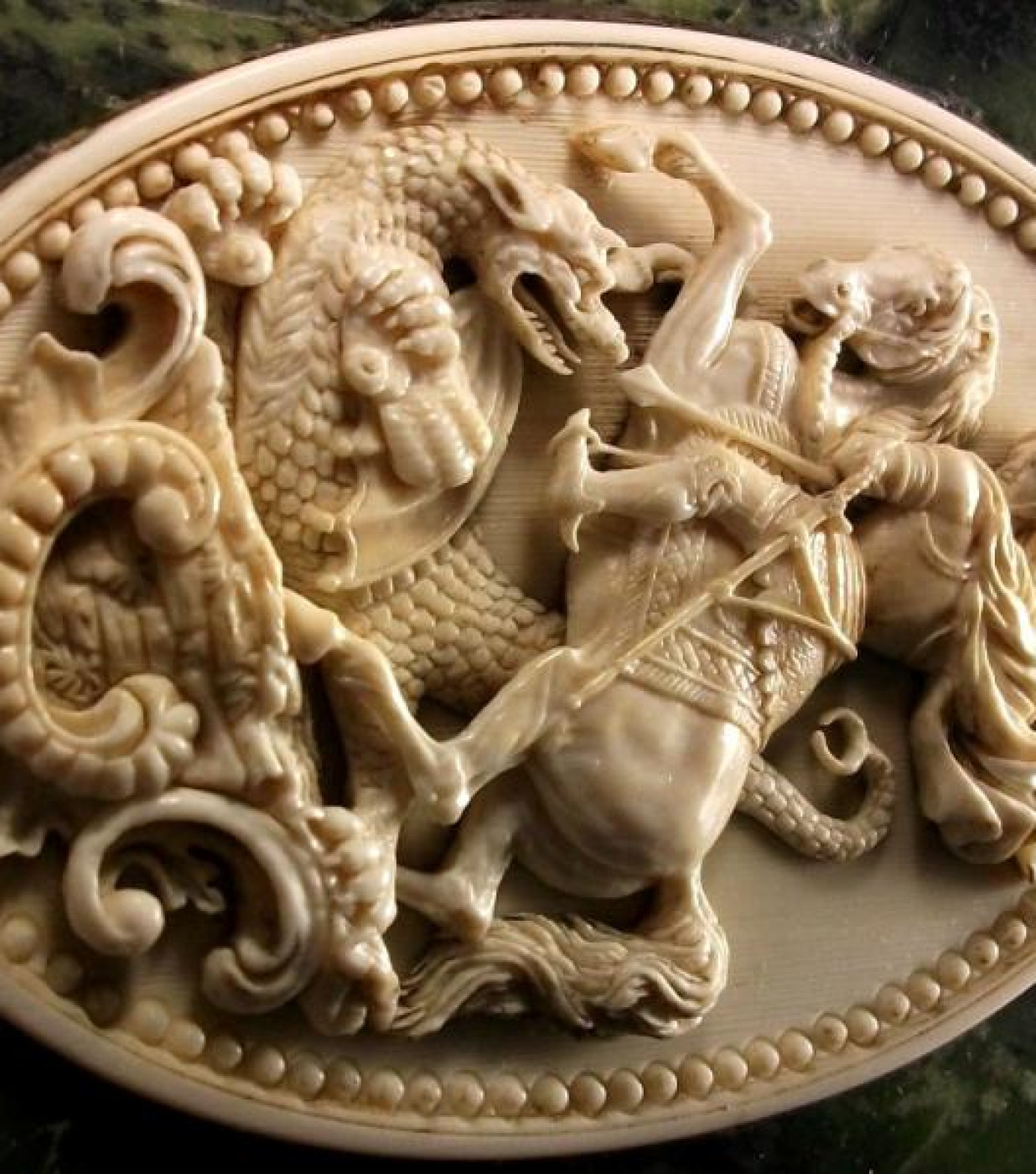 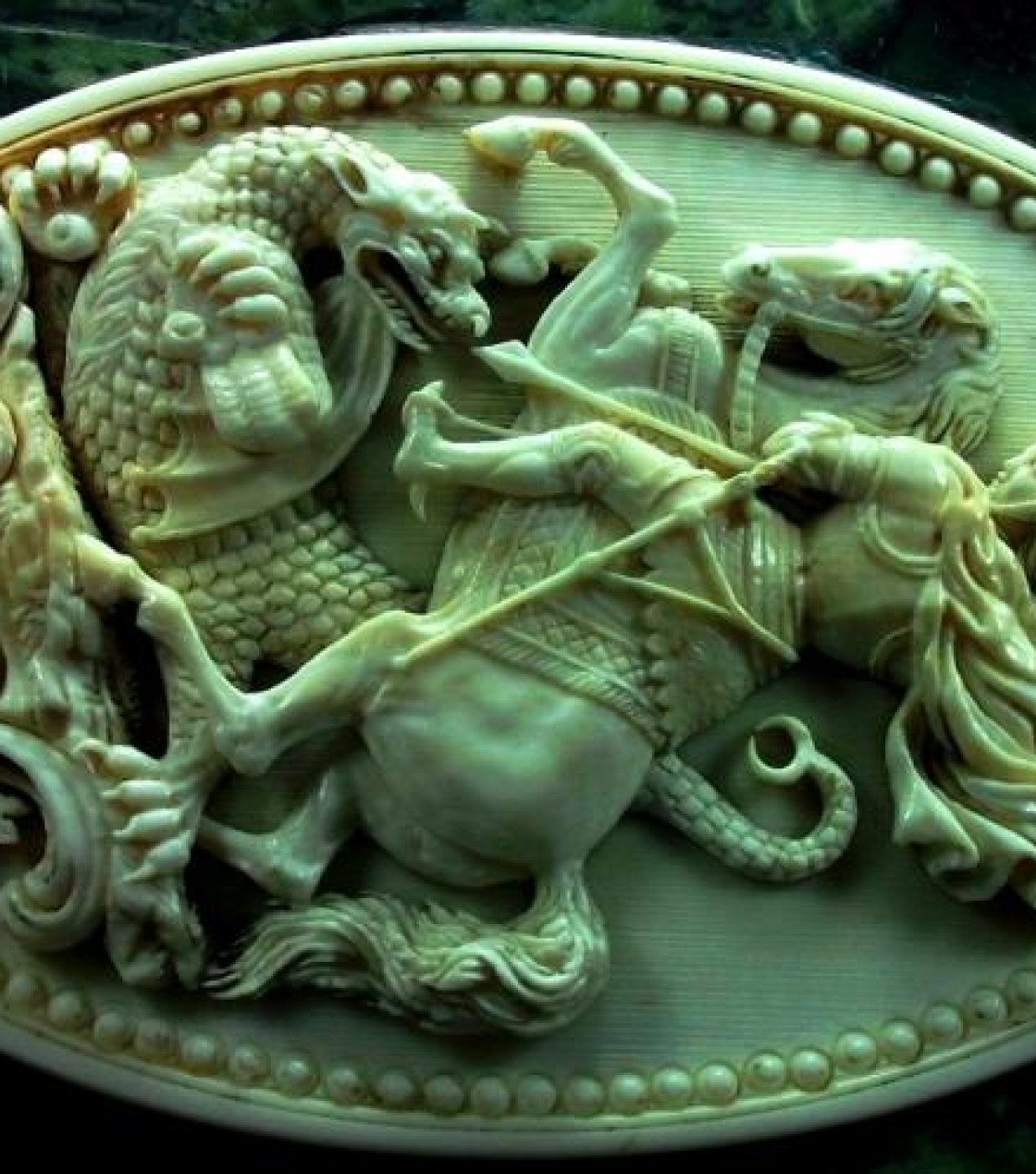 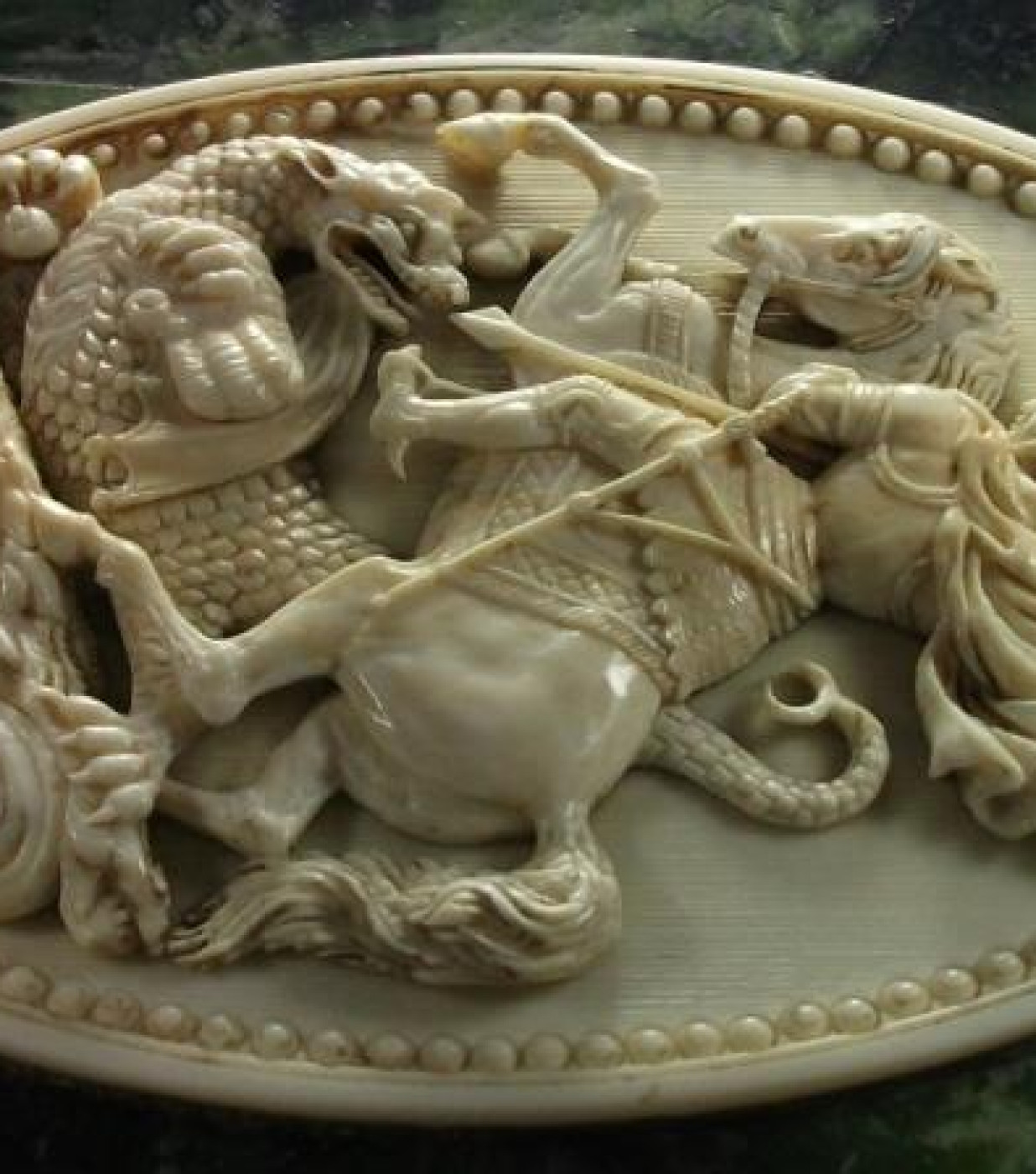 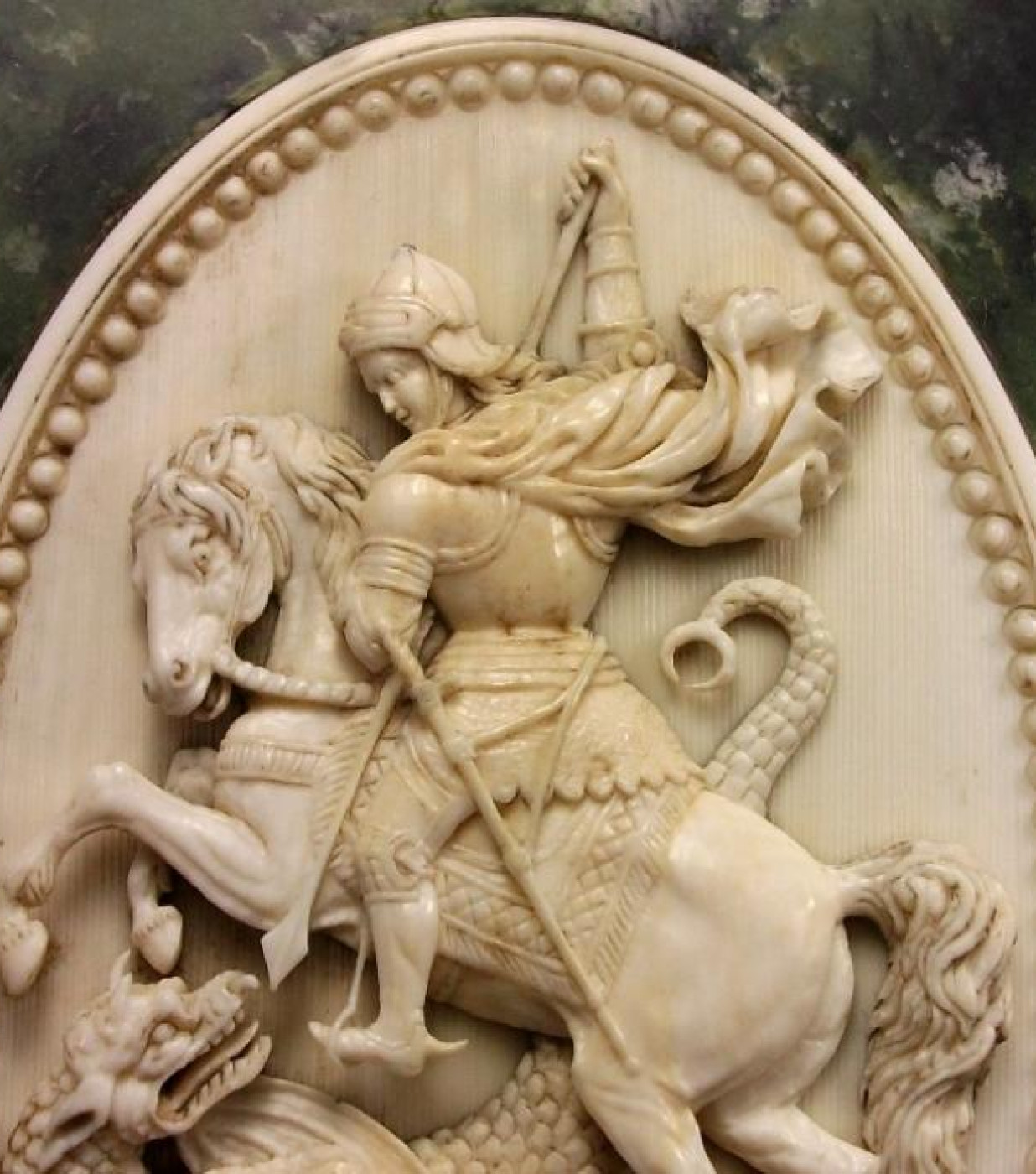 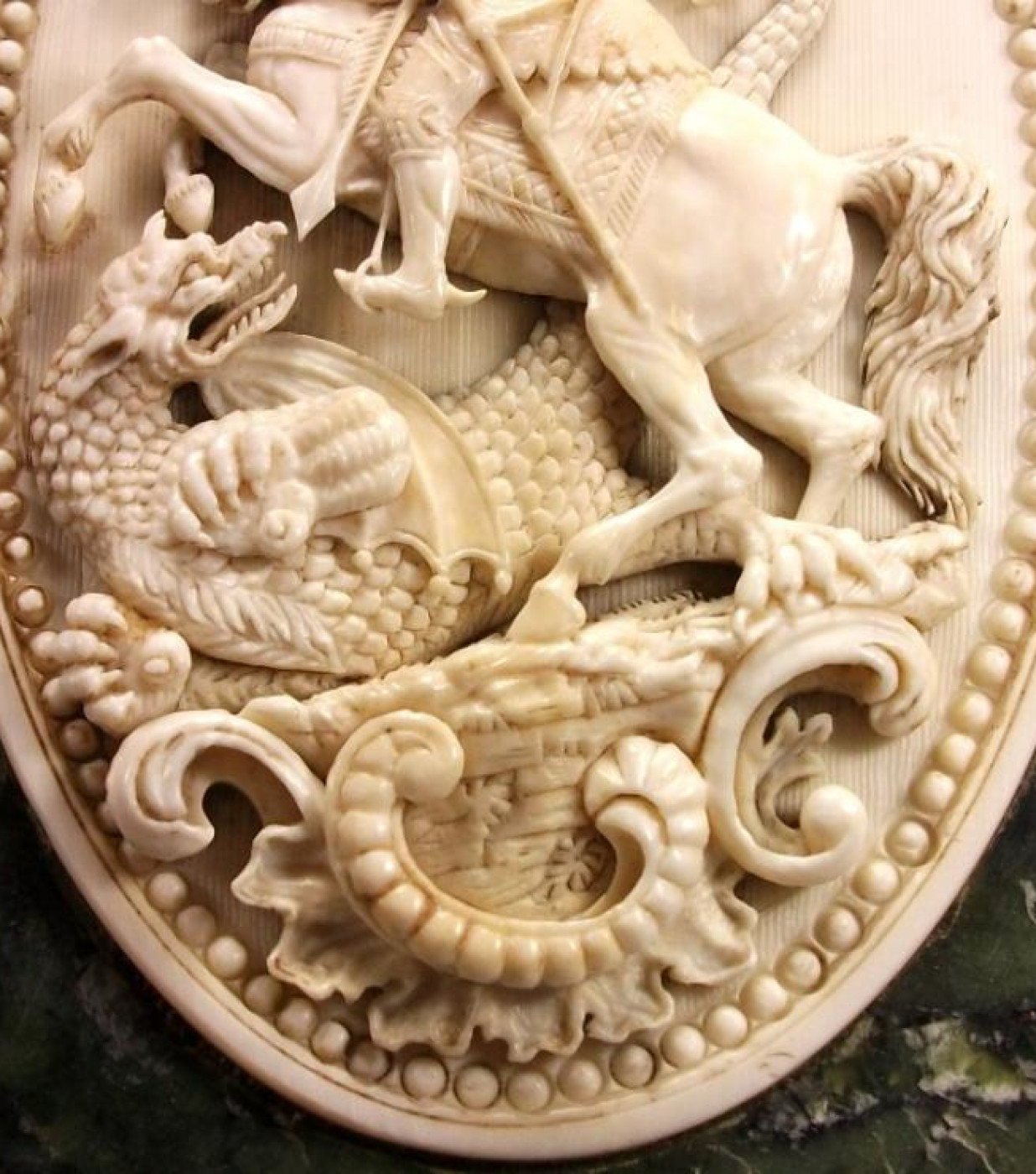 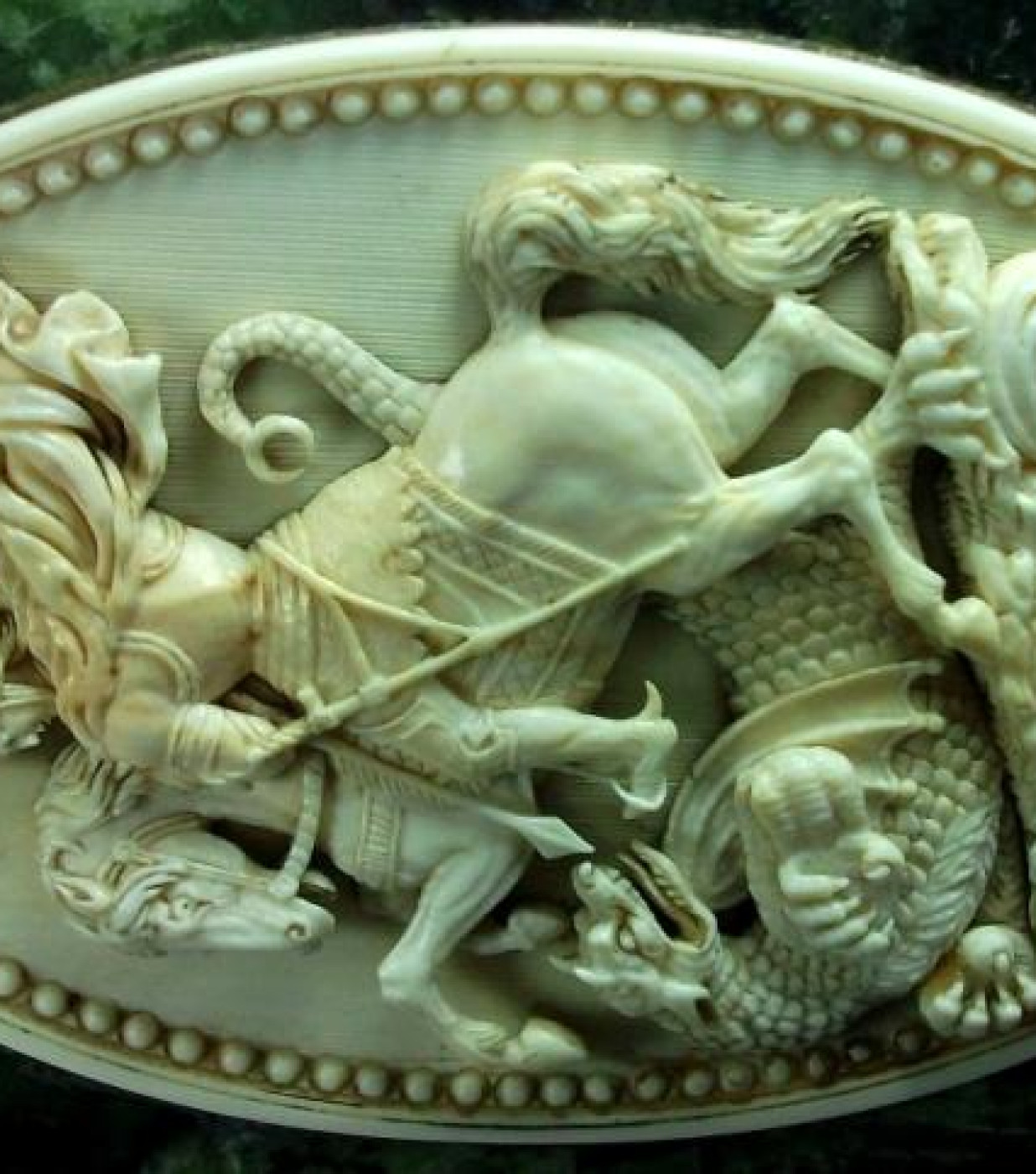 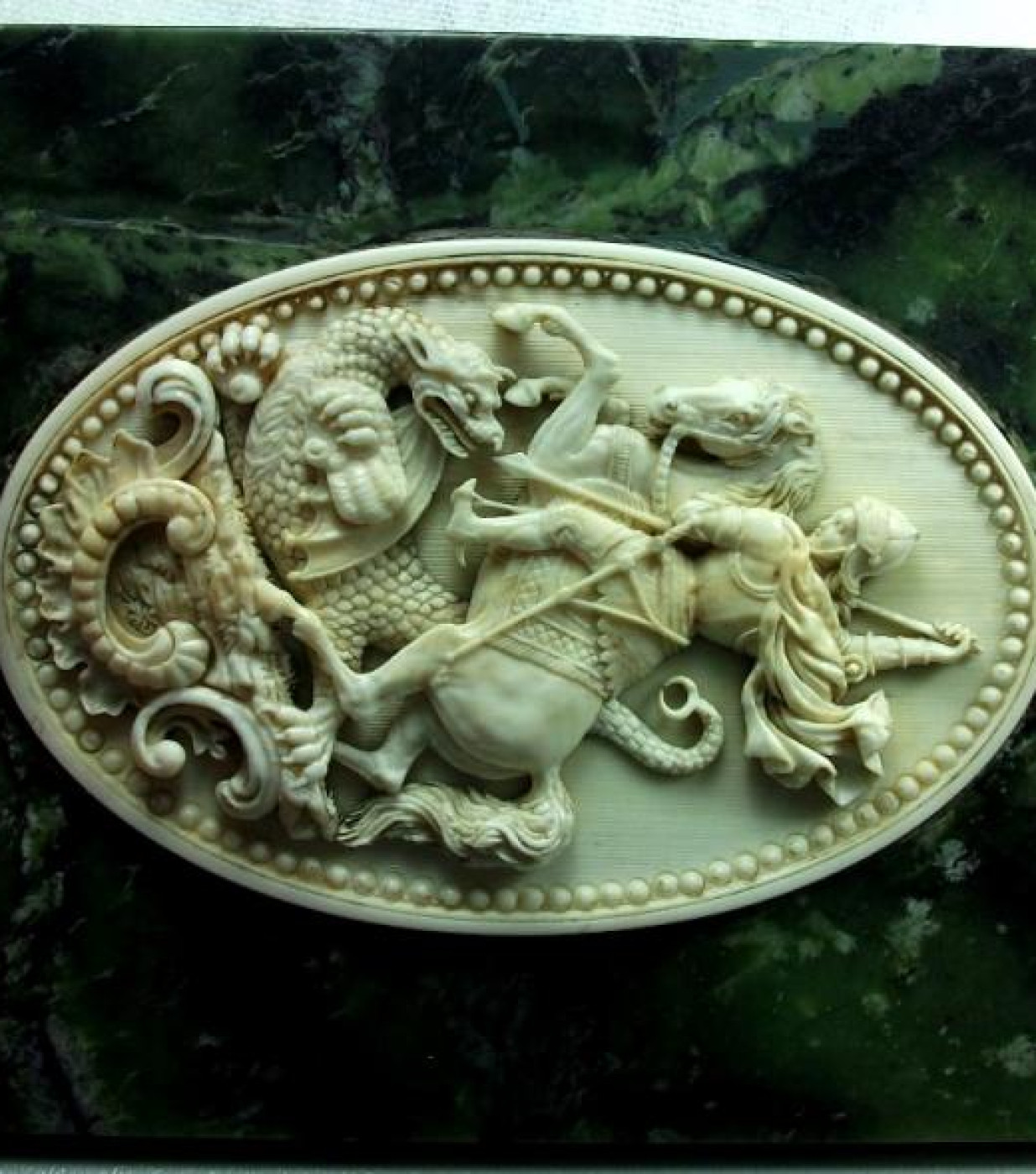 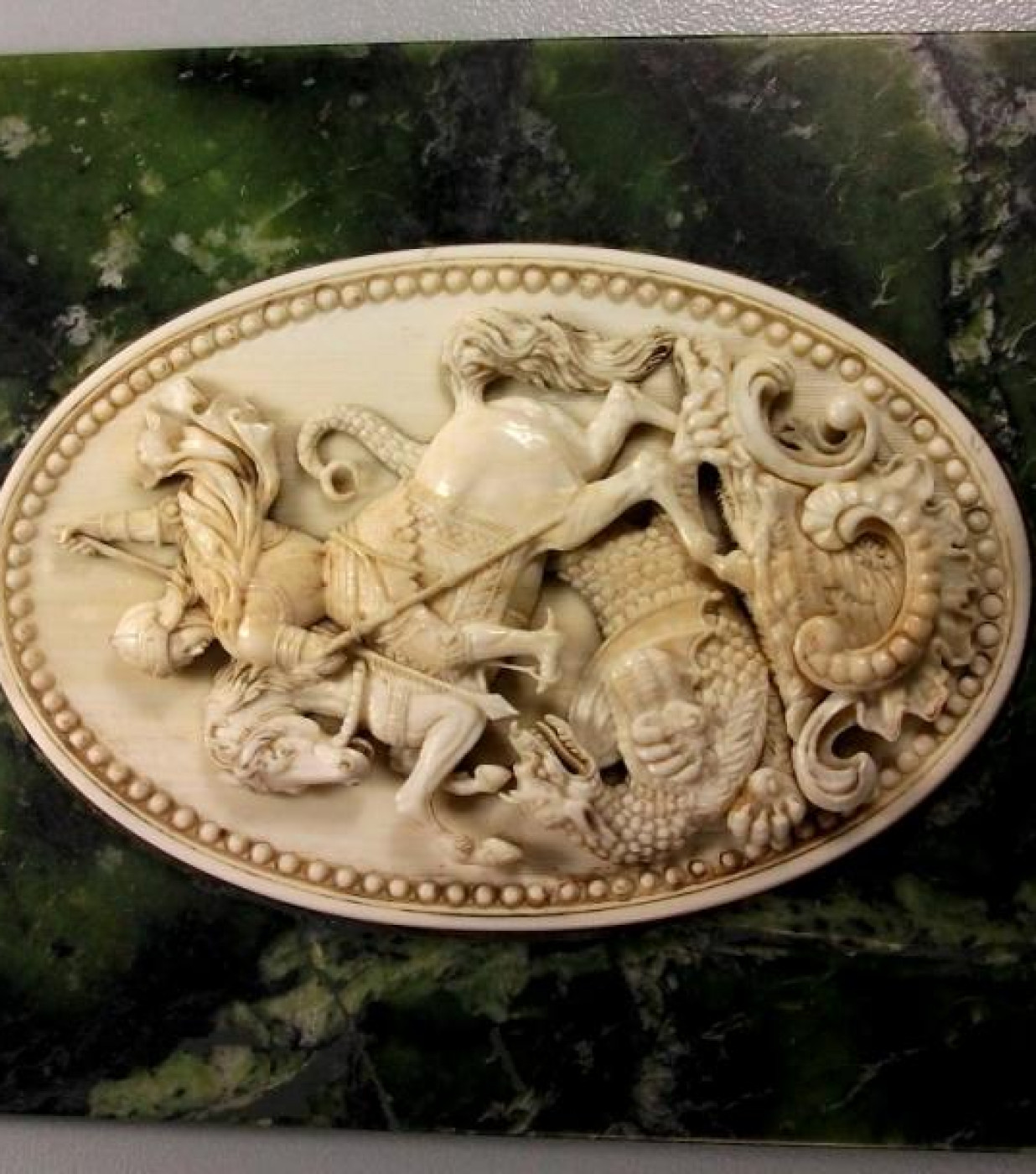 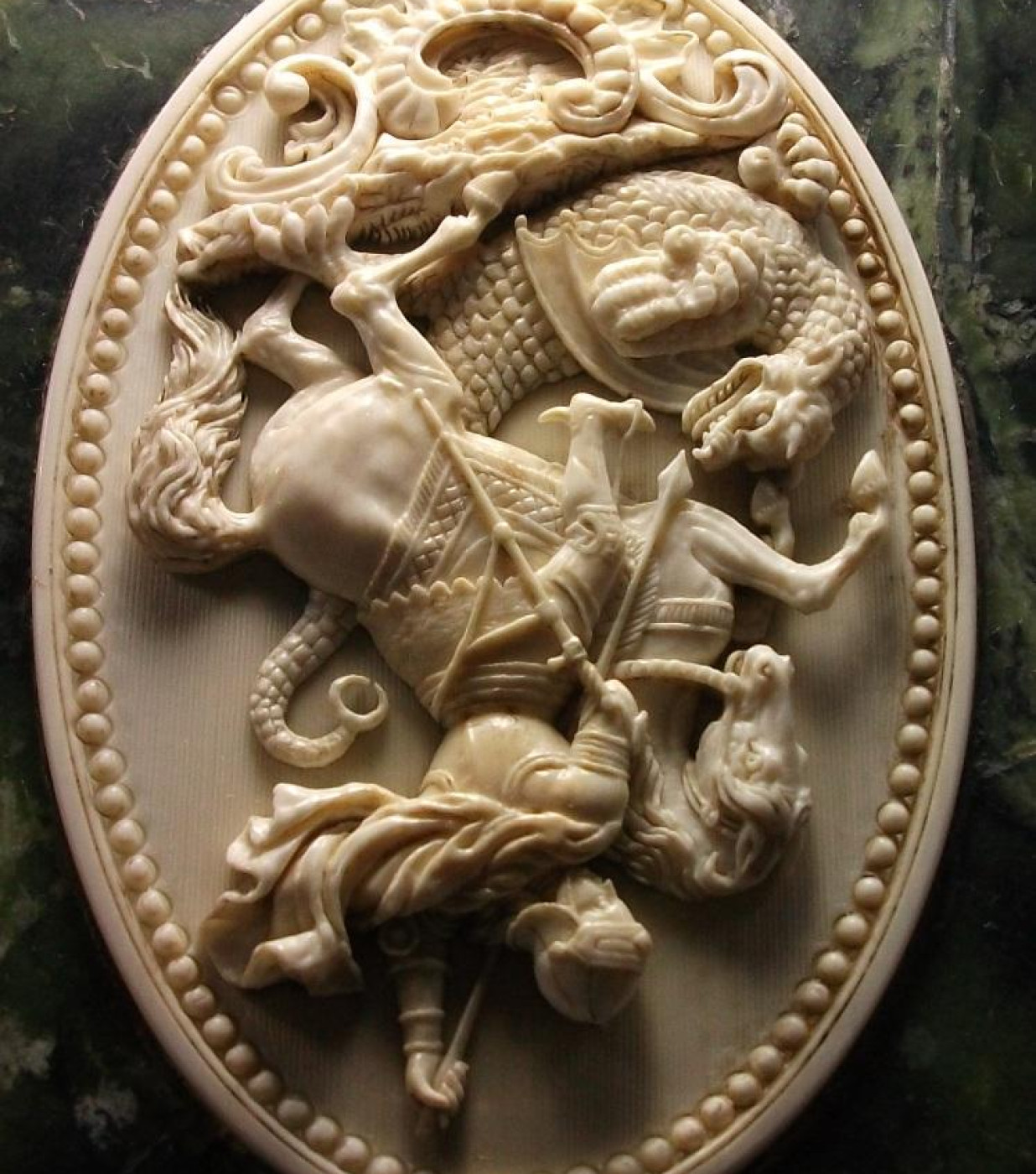 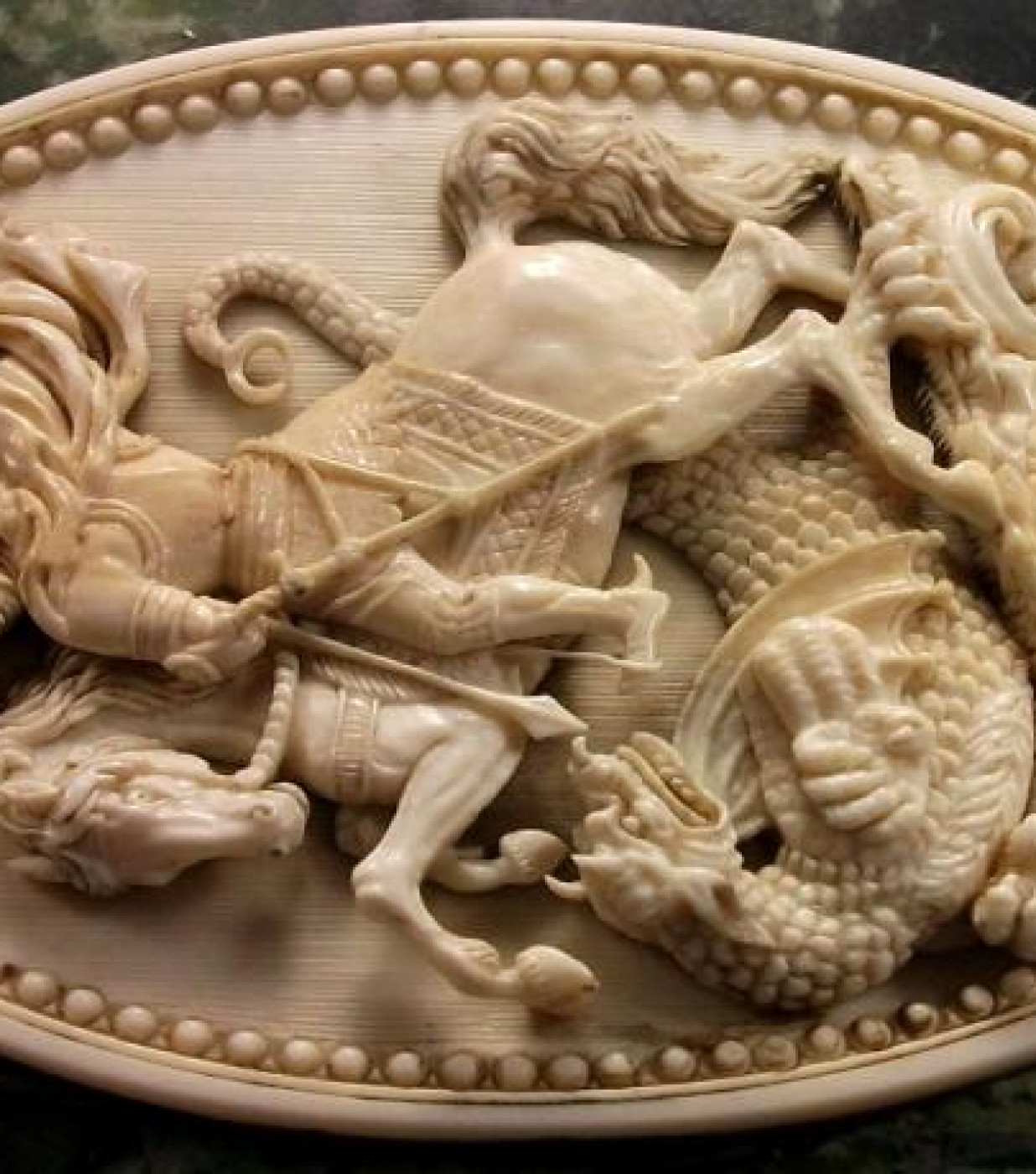 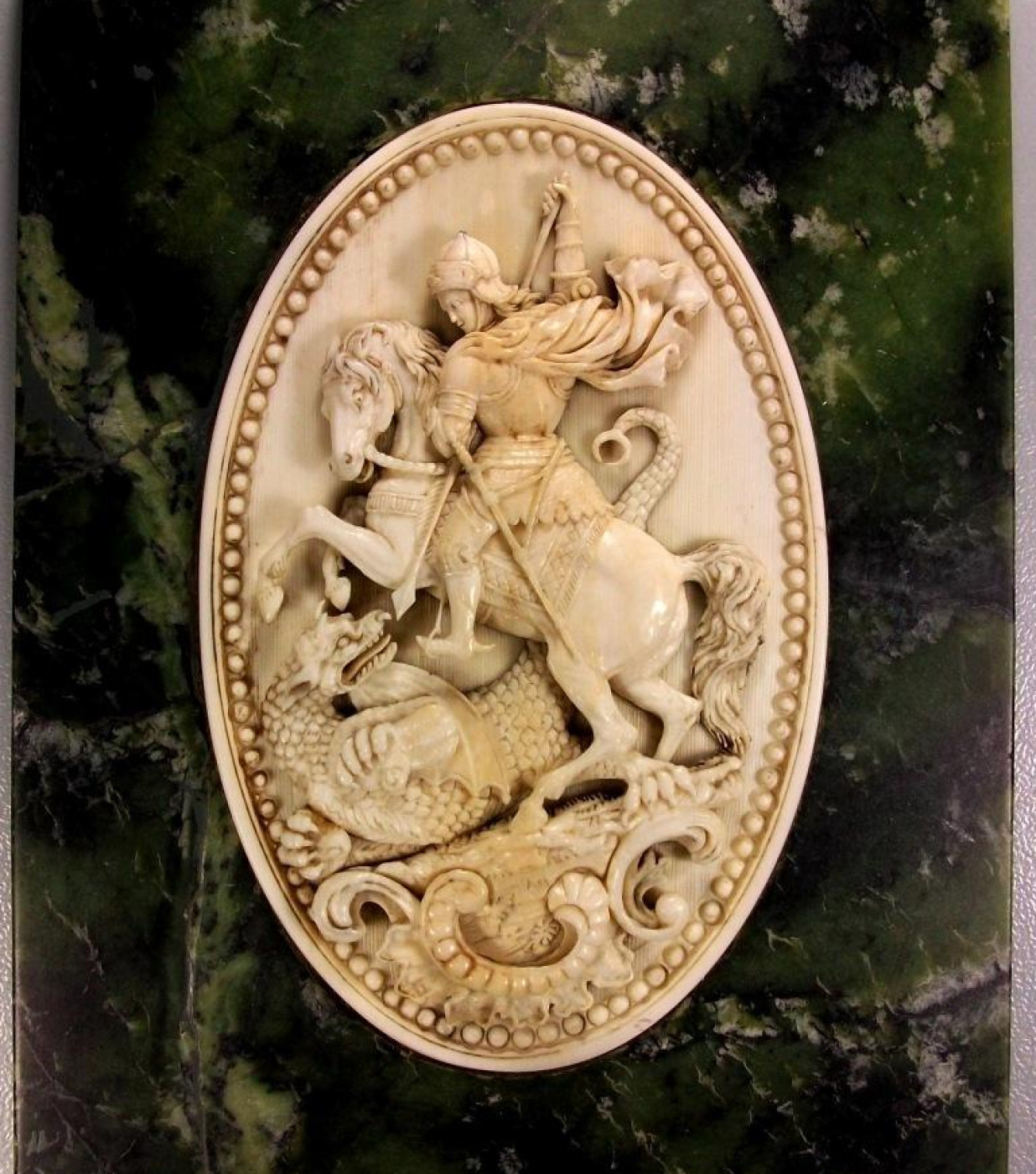 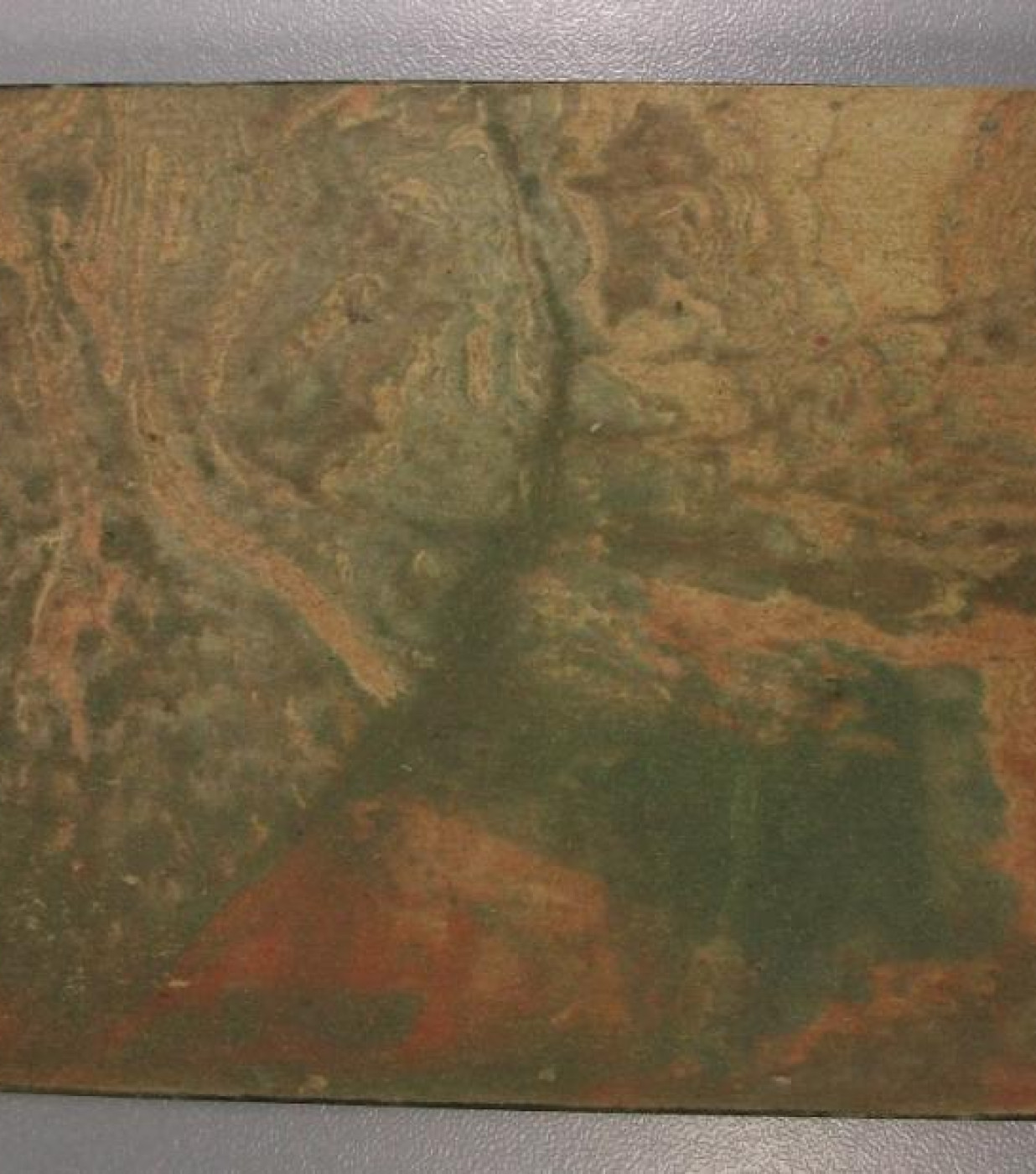 This is an out of this world ivory cameo plaque. Saying that it is a Museum Quality carving is reductive because this cameo is something that goes beyond our imagination. Everything is amazing in this piece, the three-dimensional carving, the proportions, the intensity of the scene and the various and real expressions of the subjects. This cameo comes from Germany where the ivory master carvers made wonderful artworks using that material. Germany and France were the countries where the best ivory carving were made from  1600's until the beginning of 1900's. Looking at the scene carved I can just feel the emotions of a battle, St. George is so finely depicted and his face has the satisfied expression of the one who knows that is winning the battle against the bad. His horse instead is scared by the dragon, we can read this by the expression of its eyes, can you believe to the great skill of that carver who was able to give a fear expression to a horse's eyes?
We can examine everything starting from the main character, Saint George. His armour is perfectly made like his decorated helmet, look at his flowing cloak, it really gives the impression that wind moves it. His spear and his sword are masterly made but the thing who amazes me more is his feet held in the stirrup, look at it and you will see that the stirrup is carved completely detached from the background and is so thin that I'm amazed that something of so delicate is arrived to us completely intact.  I remain breathless looking at this cameo, never in my life I saw something of so incredible.
Look at the horse's body, it is perfect, all the muscles are stretched in the effort to avoid the dragon bite. His mane and his tail are incredible like his scared expression. The saddle is wonderful, so decorated and fringed, we can even see the belt which ties the saddle to the horse's body.
What can we say about the dragon? There are no words to describe it, it is not a simple carved dragon, it is a work of art, as everything in this cameo, you can see the ferocity on his face, every fiber of his body twists to try to escape to the inevitable defeat. Look at his nails, they really give the impression that they could kill every one in once shot. The carver was able to make it just like the symbol of bad.
To lighten a bit the power of the scene, the cameo has been embellished with carved beads as frame and artistic scrolls at the bottom. This is a more than unique piece which any Museum would be proud to have.


A bit of History:
According to the Golden Legend the narrative episode of Saint George and the Dragon took place in a place he called Silene, in Libya. There was no such place, the name being perhaps a corruption of Cyrene. The Golden Legend is the first to place this legend in Libya, as a sufficiently exotic locale, where a dragon might be imagined. This town had a pond large as a lake where a plague-bearing dragon dwelled that envenomed all the countryside. To appease the dragon, the people of Silene used to feed it a sheep every day, and when the sheep failed, they fed it their children, chosen by lottery. It happened that the lot fell on the king's daughter. The king, distraught with grief, told the people they could have all his gold and silver and half of his kingdom if his daughter were spared; the people refused. The daughter was sent out to the lake, decked out as a bride, to be fed to the dragon. Saint George by chance rode past the lake. The princess, trembling, sought to send him away, but George vowed to remain. The dragon reared out of the lake while they were conversing. Saint George fortified himself with the Sign of the Cross charged it on horseback with his lance and gave it a grievous wound. Then he called to the princess to throw him her girdle and put it around the dragon's neck. When she did so, the dragon followed the girl like a meek beast on a leash. She and Saint George led the dragon back to the city of Silene, where it terrified the people at its approach. But Saint George called out to them, saying that if they consented to become Christians and be baptised he would slay the dragon before them. The king and the people of Silene converted to Christianity, George slew the dragon, and the body was carted out of the city on four ox-carts. "Fifteen thousand men baptized, without women and children." On the site where the dragon died, the king built a church to the Blessed Virgin Mary and Saint George, and from its altar a spring arose whose waters cured all disease Traditionally, the lance with which St. George slew the dragon was called Ascalon, a name recalling the city of Ashkelon, Israel. From this tradition, the name Ascalon was used by Winston Churchill for his personal aircraft during World War II (records at Bletchley Park), since St. George is the Patron Saint of England.