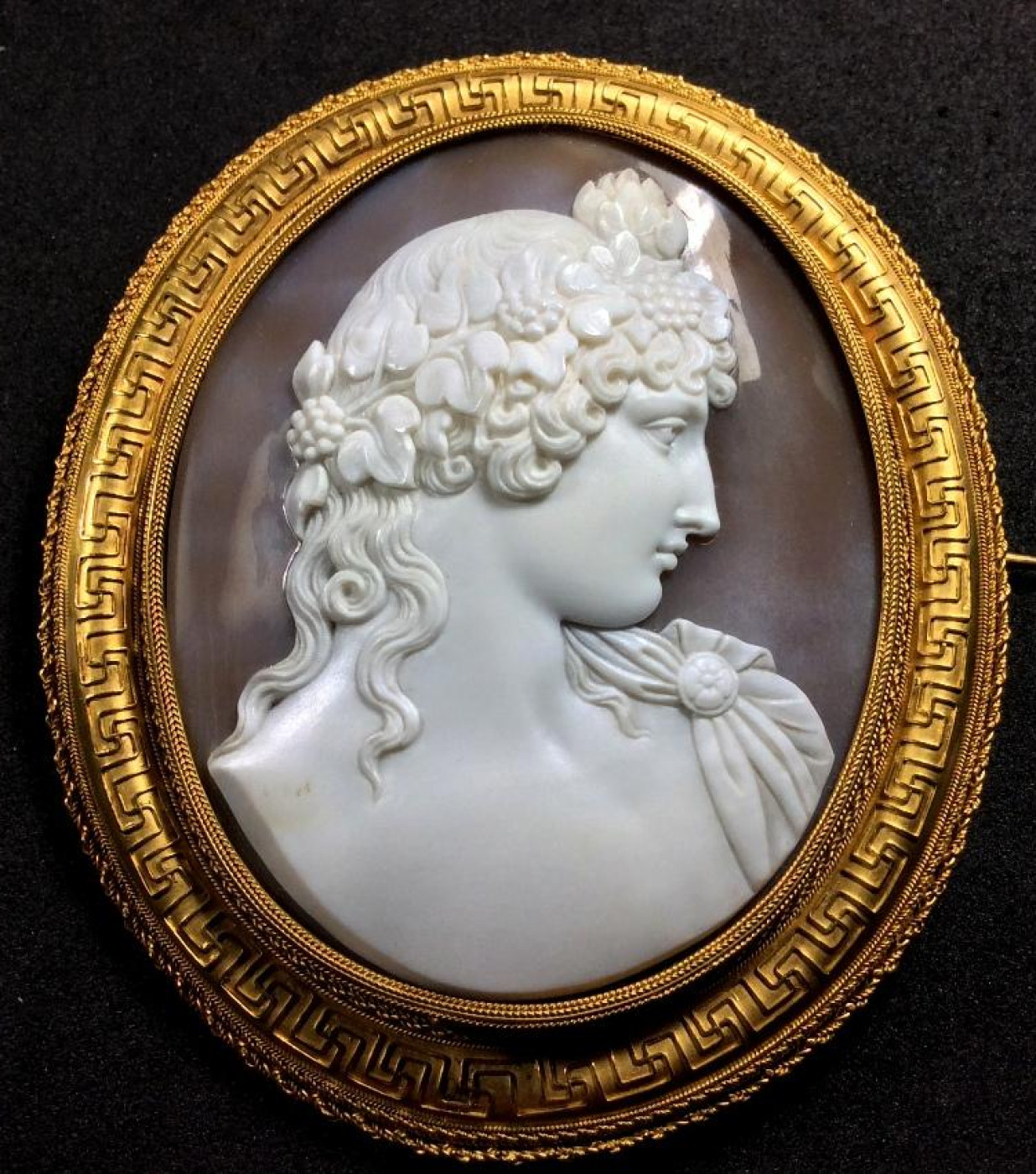 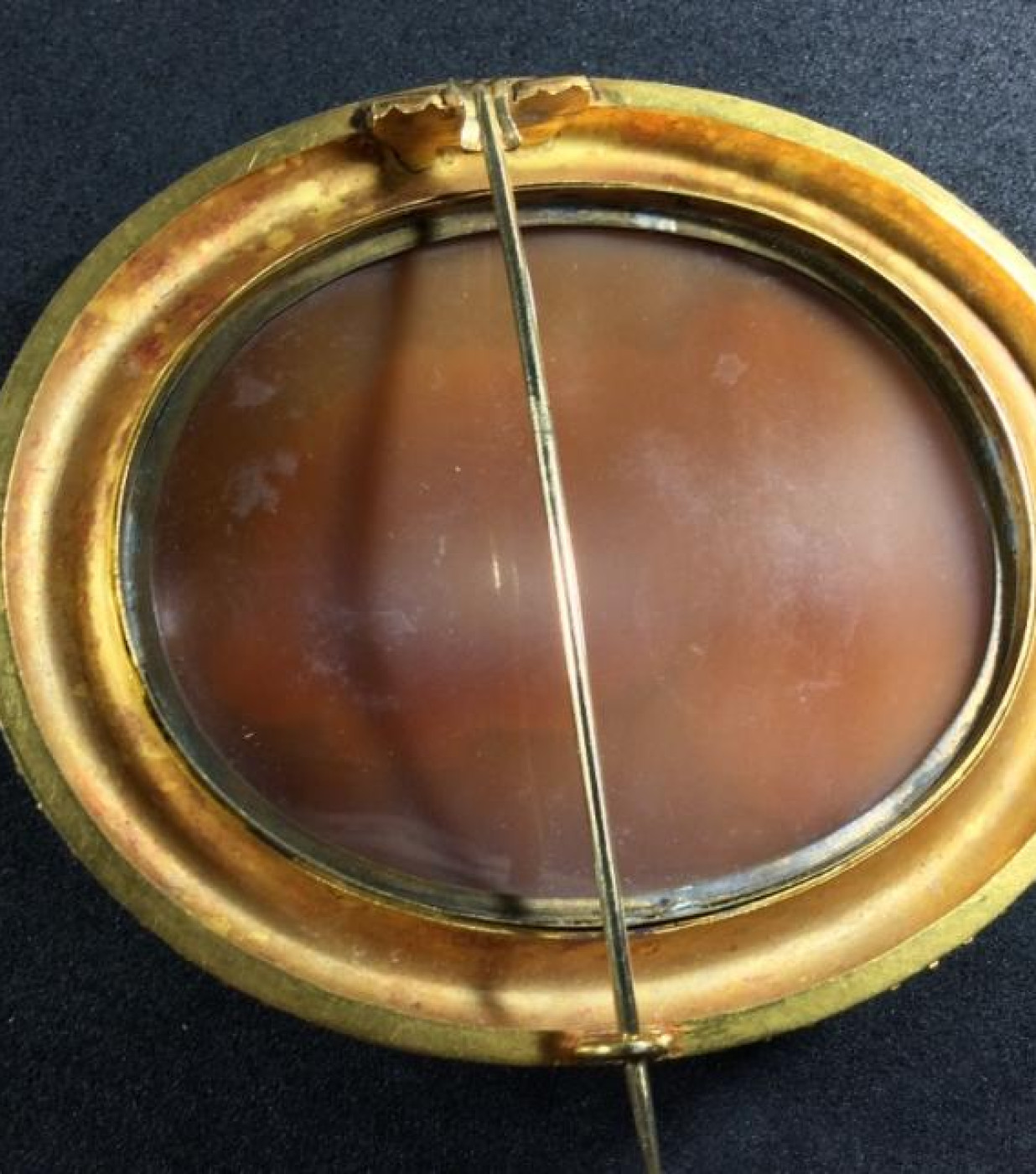 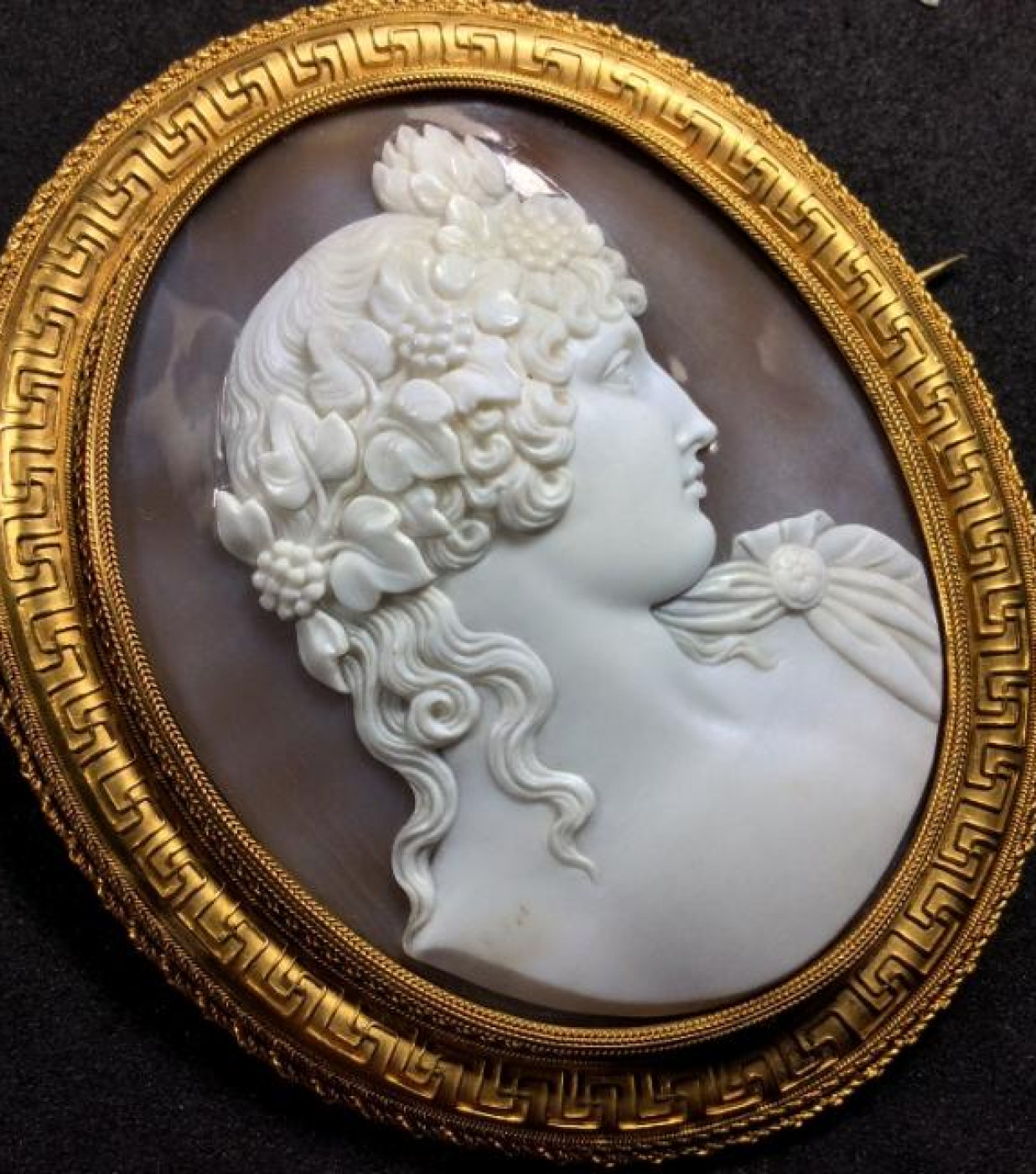 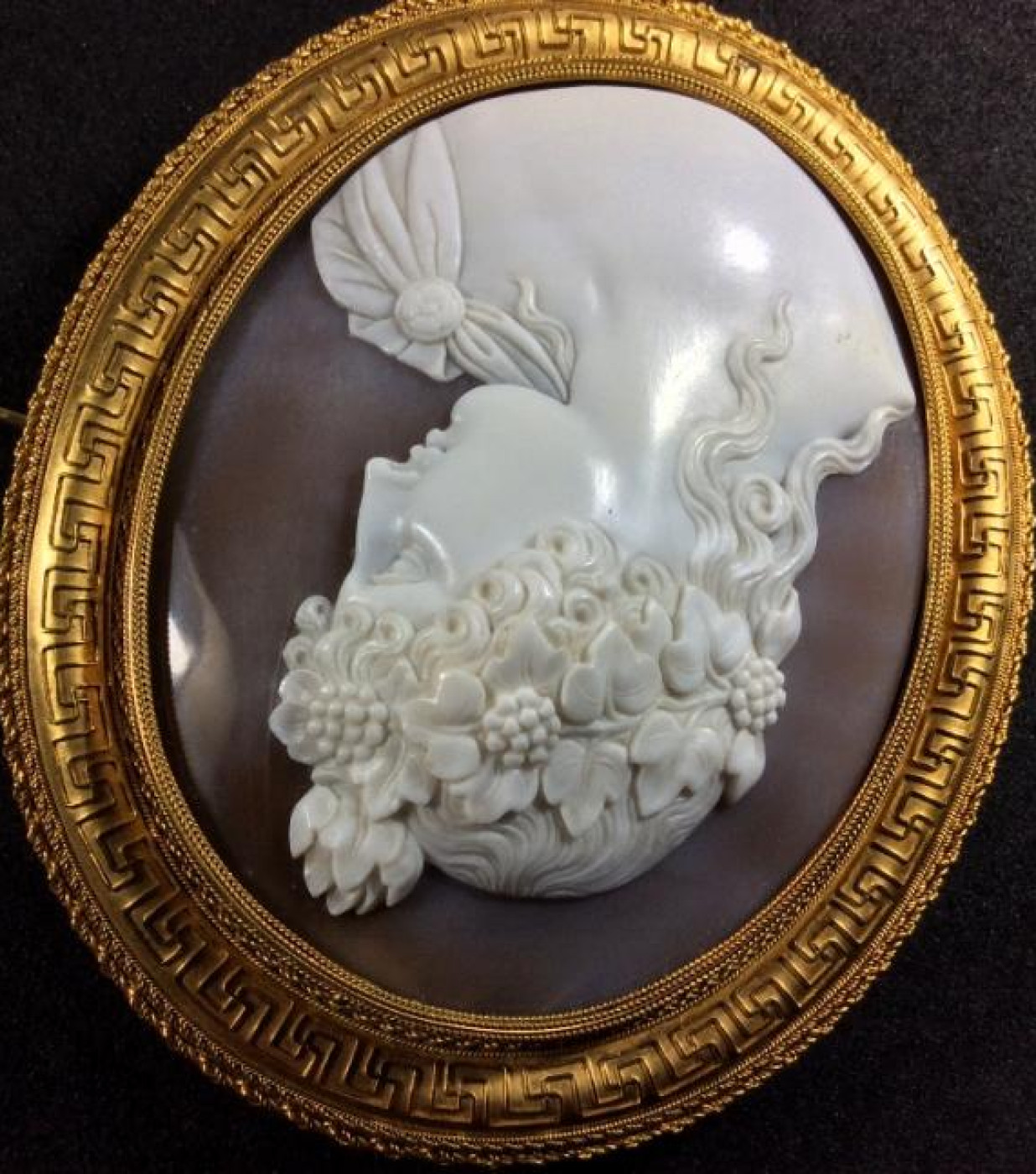 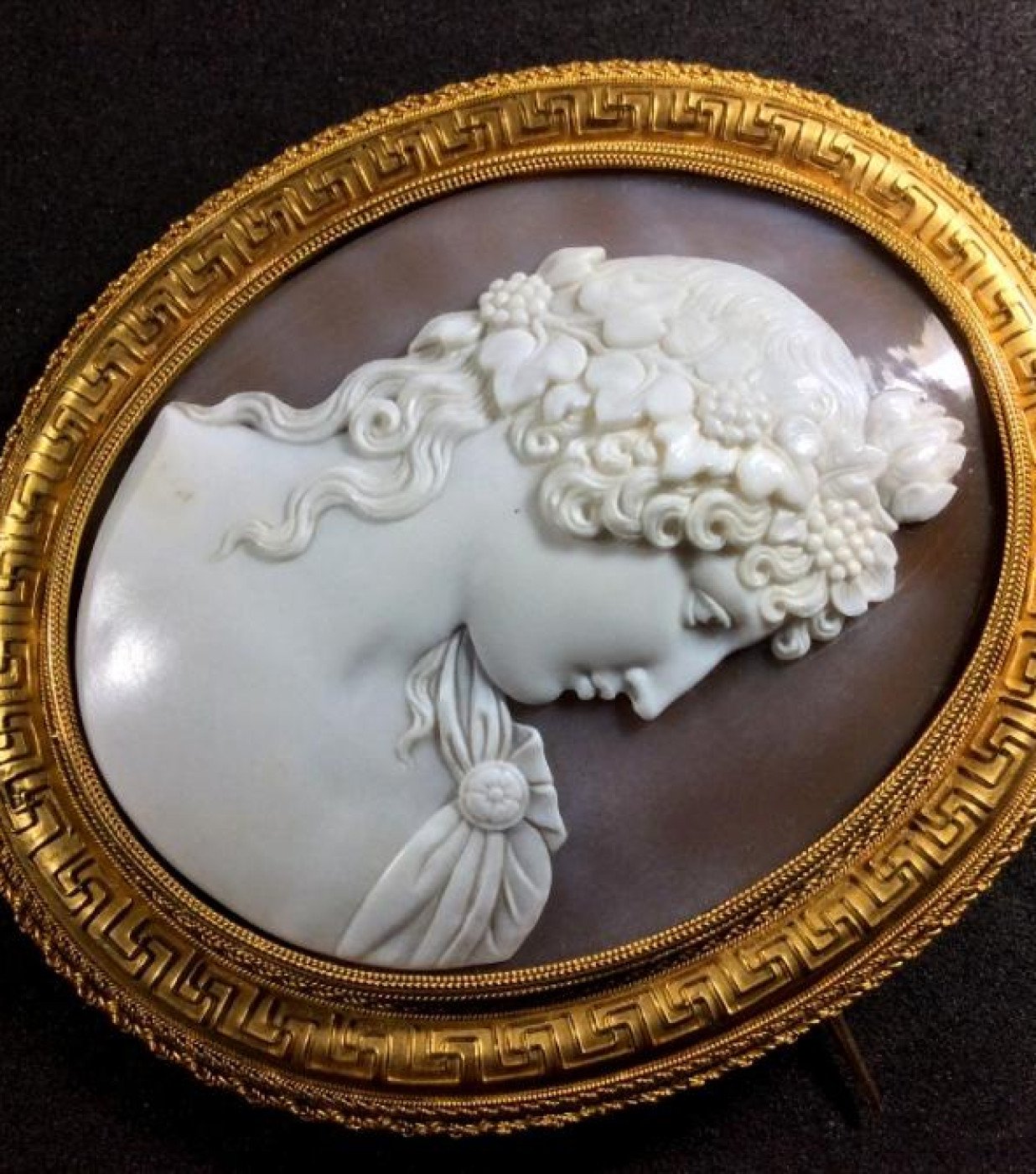 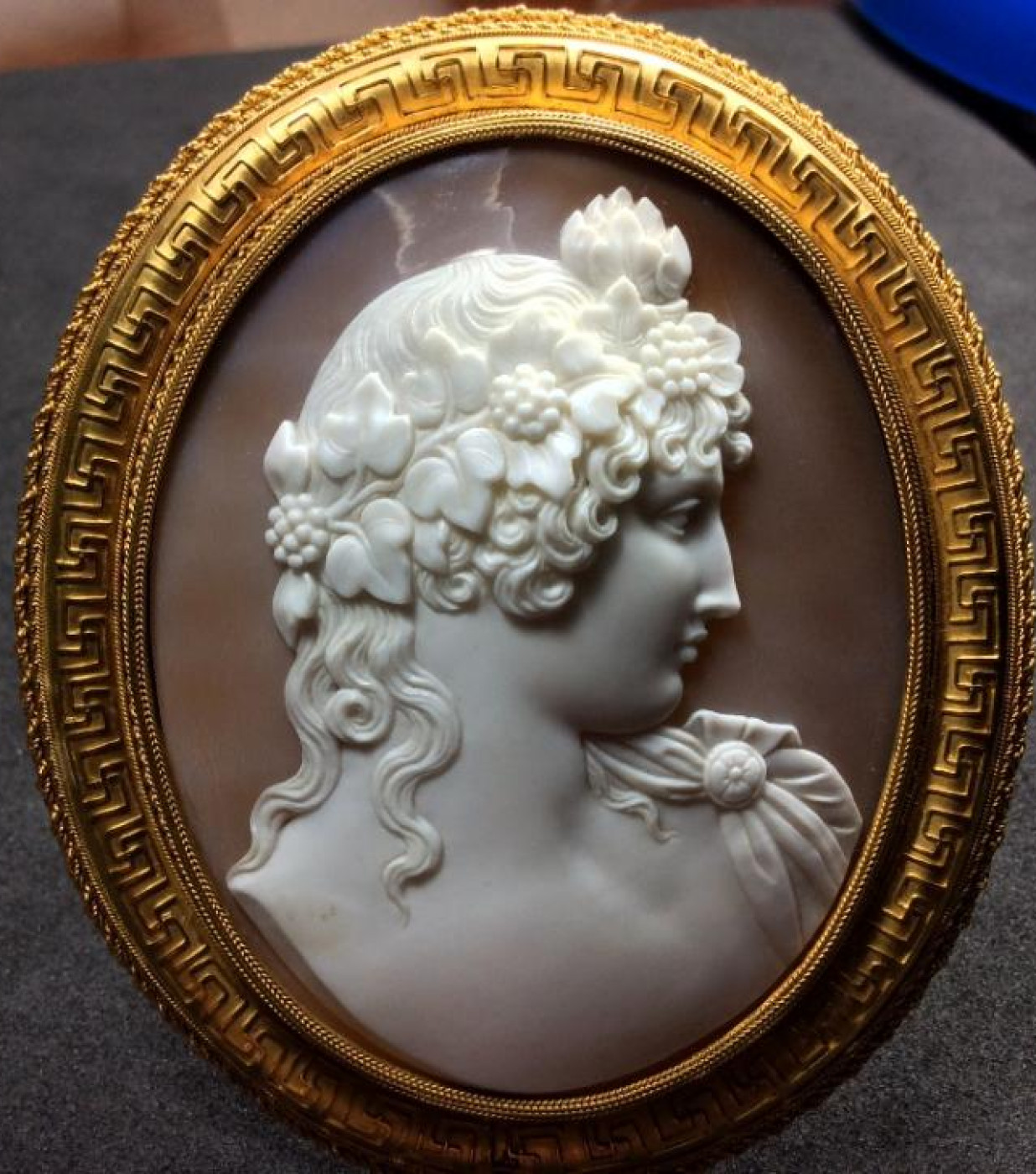 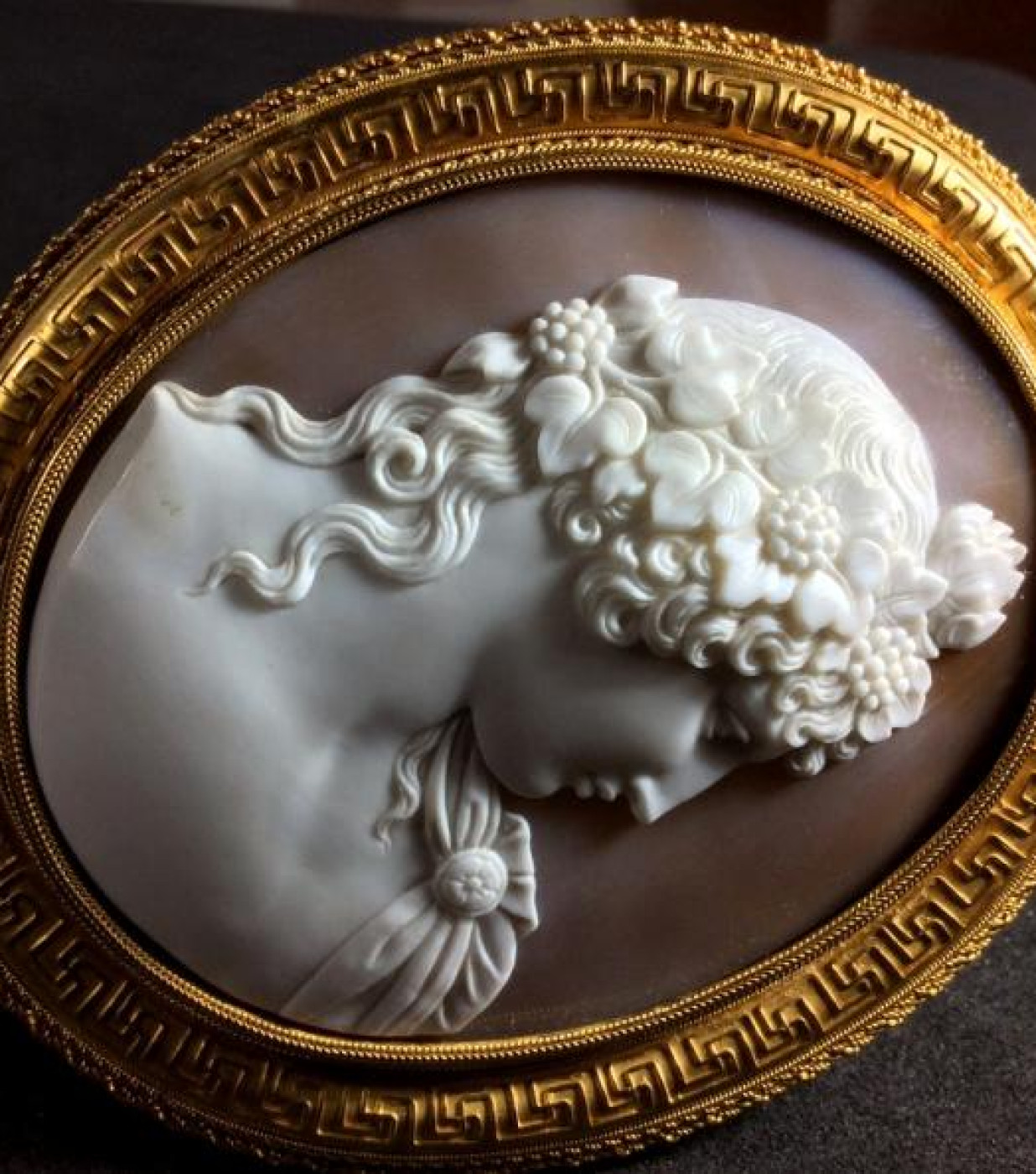 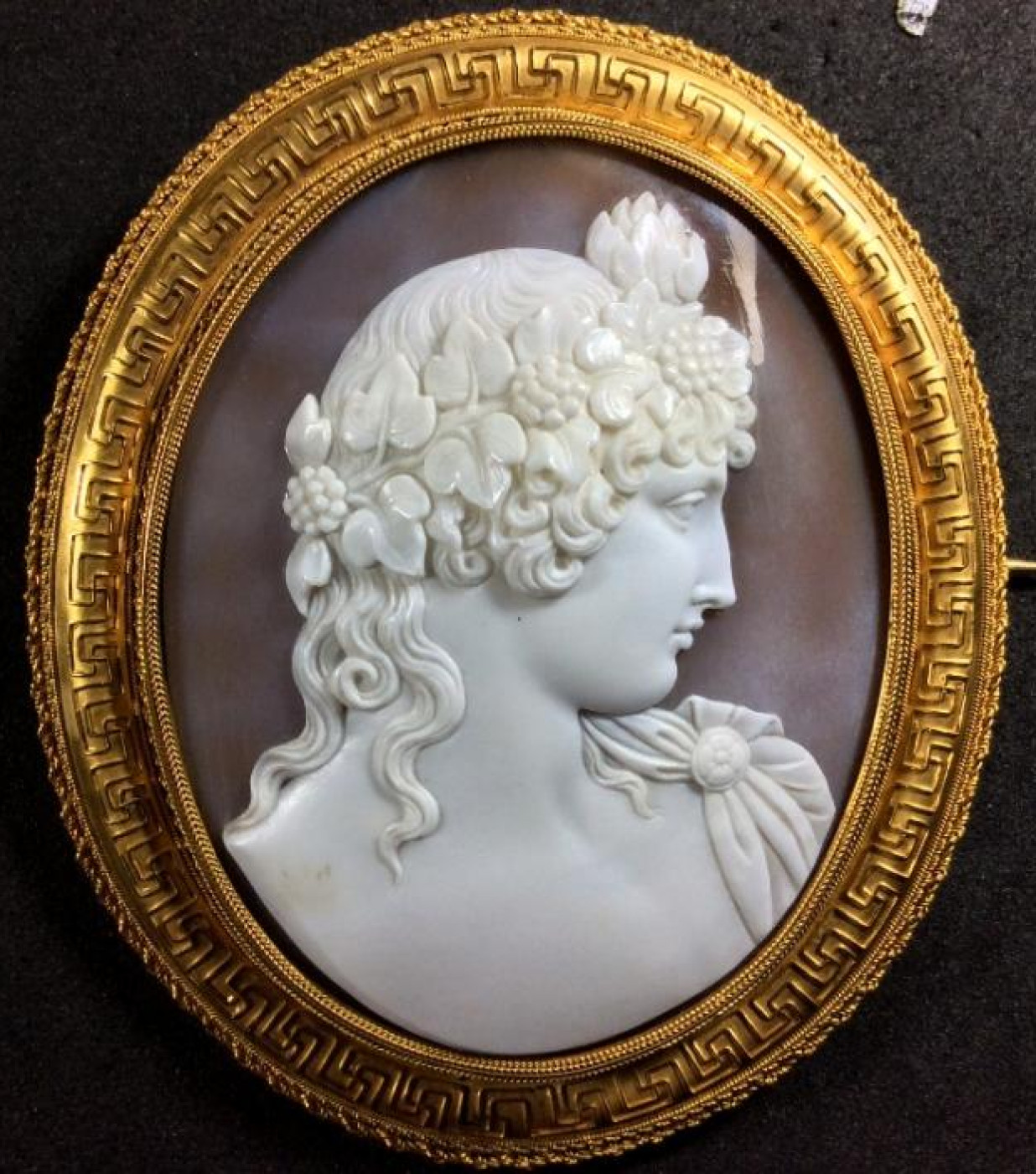 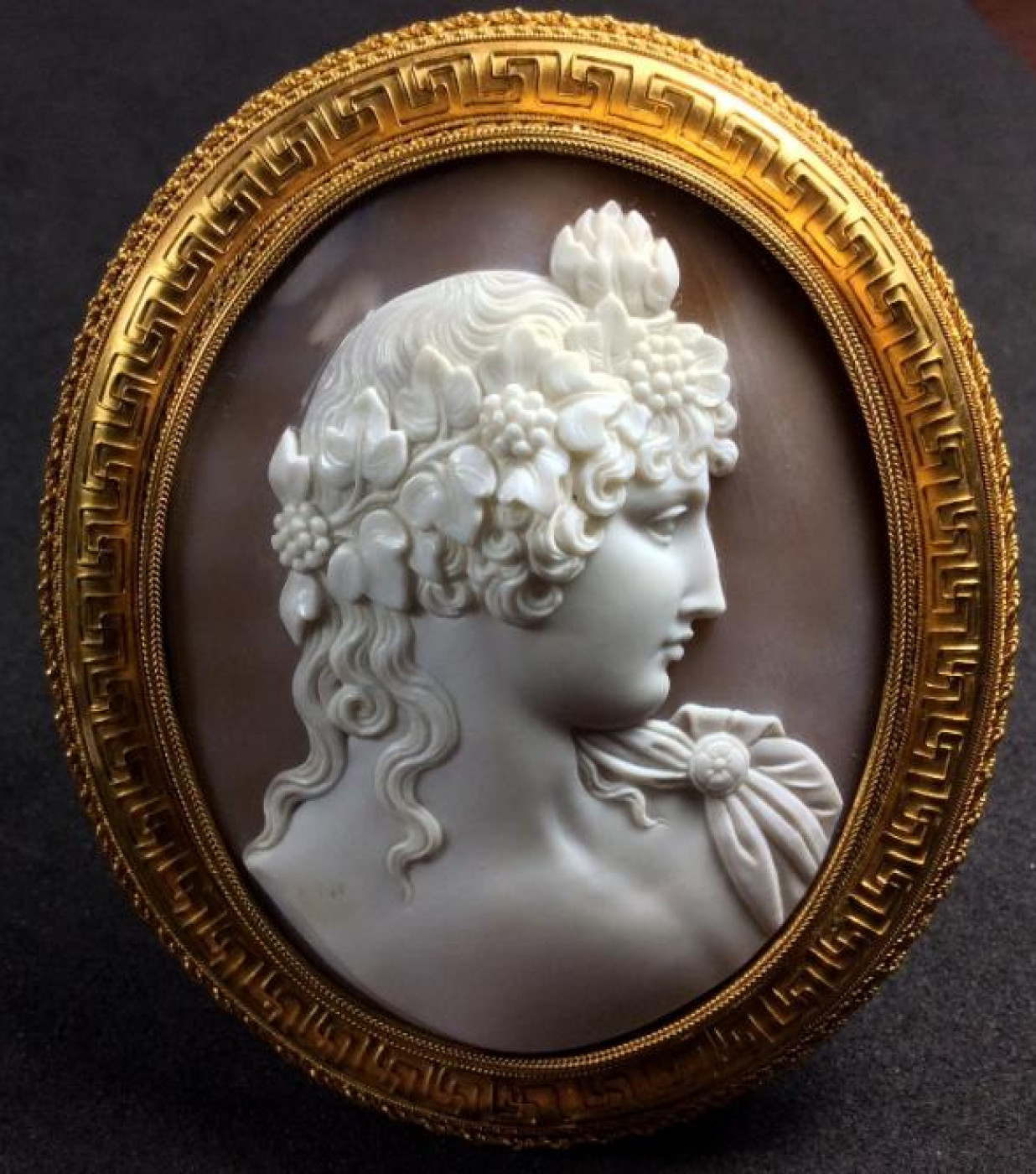 This is a Museum Quality and huge cameo depicting Antinous Vertumnus, favourite of the Emperor Hadrian, a handsome youth  who was idealized as an example of perfect male beauty and you can easily understand why. I'm speechless looking at him. He is depicted in profile with a pine cone, symbol of fertility and fruiting vines wreathing his flowing hair. The leaves are so finely carved that seems that they can be picked up one by one.  With no doubt this one is really one of the most beautiful Antinous I have ever had  the pleasure to handle,  the pictures speak by themselves.  Antinous' face is so well carved, he's so handsome and manly. His nose is just perfect, his eyes have a sweet look. His mouth looks full and tender and he's almost smiling. I have already mentioned his wonderful head crowned with leaves, you can admire it by yourself. His chest is strong, large and masculine and the details of his muscles can be well seen. His curly hair seems to be made to be caressed, so finely made that gives you the impression that you really could run your fingers  through it. The carving is based on an ancient bust of Antinous depicted as Dionysus-Bacchus in the Palazzo Aldobrandini, Rome. The frame is another artwork, Etruscan Revival style, the right one to evidence the cameo for first, so the eyes are mainly caught by the cameo which really is worth to be seen. This is another masterly carved cameo. A more than desirable collectors piece, rare and museum quality cameo.

Born in Bythnion around the year 105 of the Common Era, Antinous was a beautiful adolescent when he first caught the eye of the Emperor of the western world. Hadrian was already in his late forties by the time the two met, Antinous became Hadrian's favorite, sharing the Emperor's bed and his life. For a period of a little less than a decade, the two were inseparable, much to the disgrace of Hadrian's legal wife, the childless and spiteful Sabina. Imperial art and literature of the times show the men in a variety of guises and activities, particularly hunting: a sport the two enjoyed immensely. In the course of their relationship, Antinous matured from a beautiful youth into an intelligent and well-muscled young man. the Greeks referred to the visible maturation of a youth (the growth of his beard and body hair) as "clouds hiding the sun." It was shortly after the Emperor's young lover had reached this stage of his development, and just after his hair had been cut short in the style favoured by the mature men of the period, that Antinous drowned mysteriously in the Nile river during and Imperial visit to the province of Egypt. Within a year, Hadrian returned to Rome, where he officially proclaimed Antinous as a Roman God. While still deeply mourning the loss of his beloved, the Emperor realized the political significance of the Greek youth's death, and from the tragedy forged a unifying cult of worship in the previously divided Greek city-states. Hadrian and Antinous together built a unified Greek nation, a feat which the warring city-states themselves had never achieved. Despite other great accomplishments as Emperor, Hadrian spent the last eight years of his life mourning Antinous. To commemorate their great love, Hadrian worked relentlessly to build monuments and institutions to his beloved. The Emperor found the Greek-Egyptian city Antinoopolis on the banks of the Nile near where Antinous died; commissioned nearly two thousand likenesses, carved from various stone materials; erected temples and altars to the new young God all over Asia Minor; established schools, gymnasiums, panhellenic  games and contests in His name. Official Roman coins were struck in all parts of the Empire except Rome to commemorate the beautiful young man. Medallions bearing Antinous' image were issued and quickly became religious icons. Found in April 1793 in a villa belonging to Hadrian and situated in Preaneste (today : Palestrina). When found, the statue was nearly intact, simply broken at the legs, otherwise barely scratched, having obviously been concealed probably at the time of Constantine the Great (ca. 288-306-337), at the latest under Theodosius the Great (ca. 346-379-395). Restored by Giovanni Pierantoni (?-ca. 1814) between 1793 and 1795. Presented soon afterwards by Pope Pius VI to his nephew the Duke Luigi Braschi Onesti. Confiscated by the French when they occupied Rome from 1798, the statue never left the harbour of Rome, and was returned to his proprietor towards 1801. Pio Braschi Onesti, son of Luigi, sold it to Pope Gregorius XIV in 1843, who had it displayed in the Lateran Museum, open in 1844. Later, in 1863, Pope Pius IX had it moved to the Sala Rotonda of the Vatican, where it has been standing since then. Called the "Antinous Braschi" since the end of the 19th century, after its first owner.