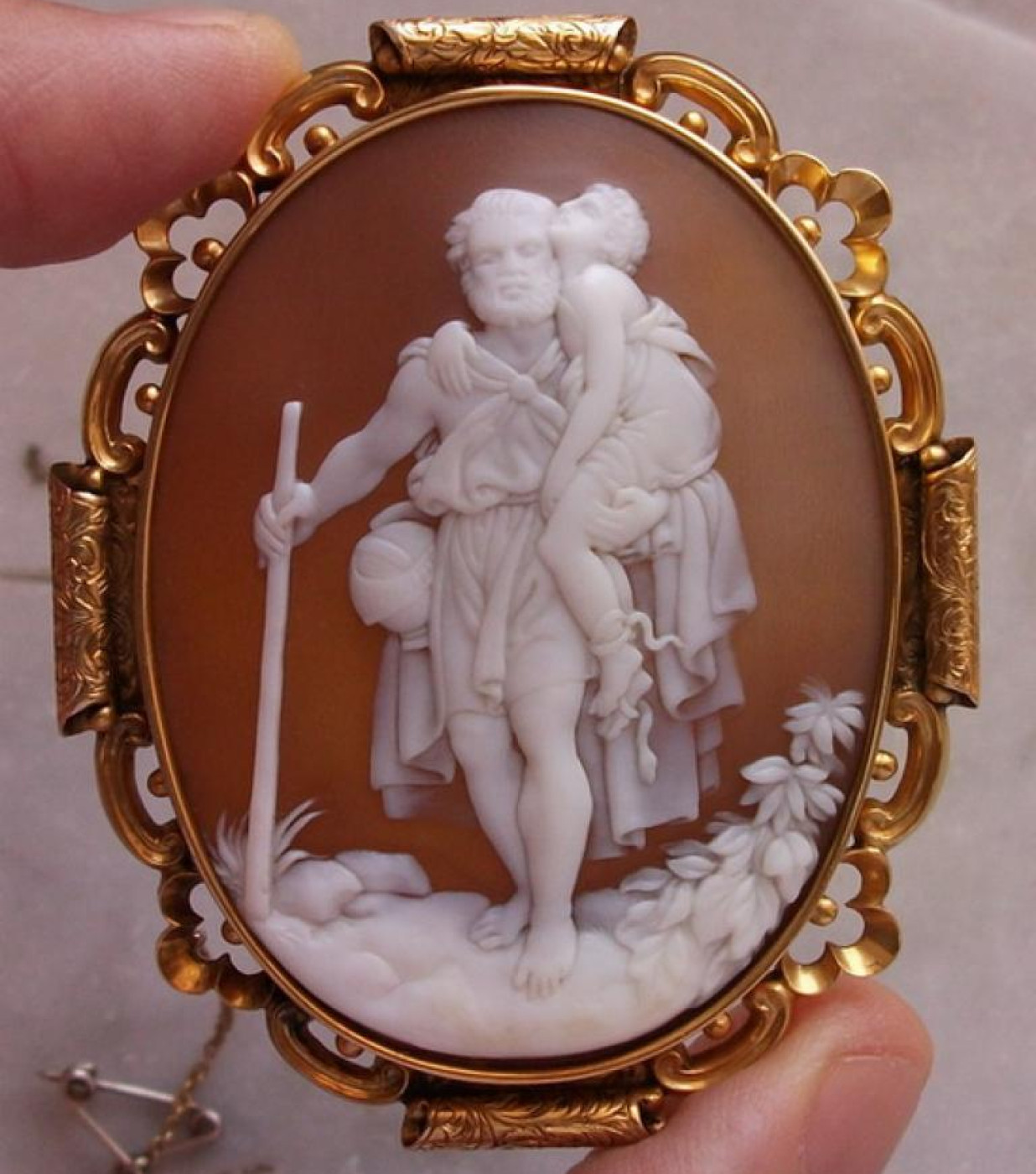 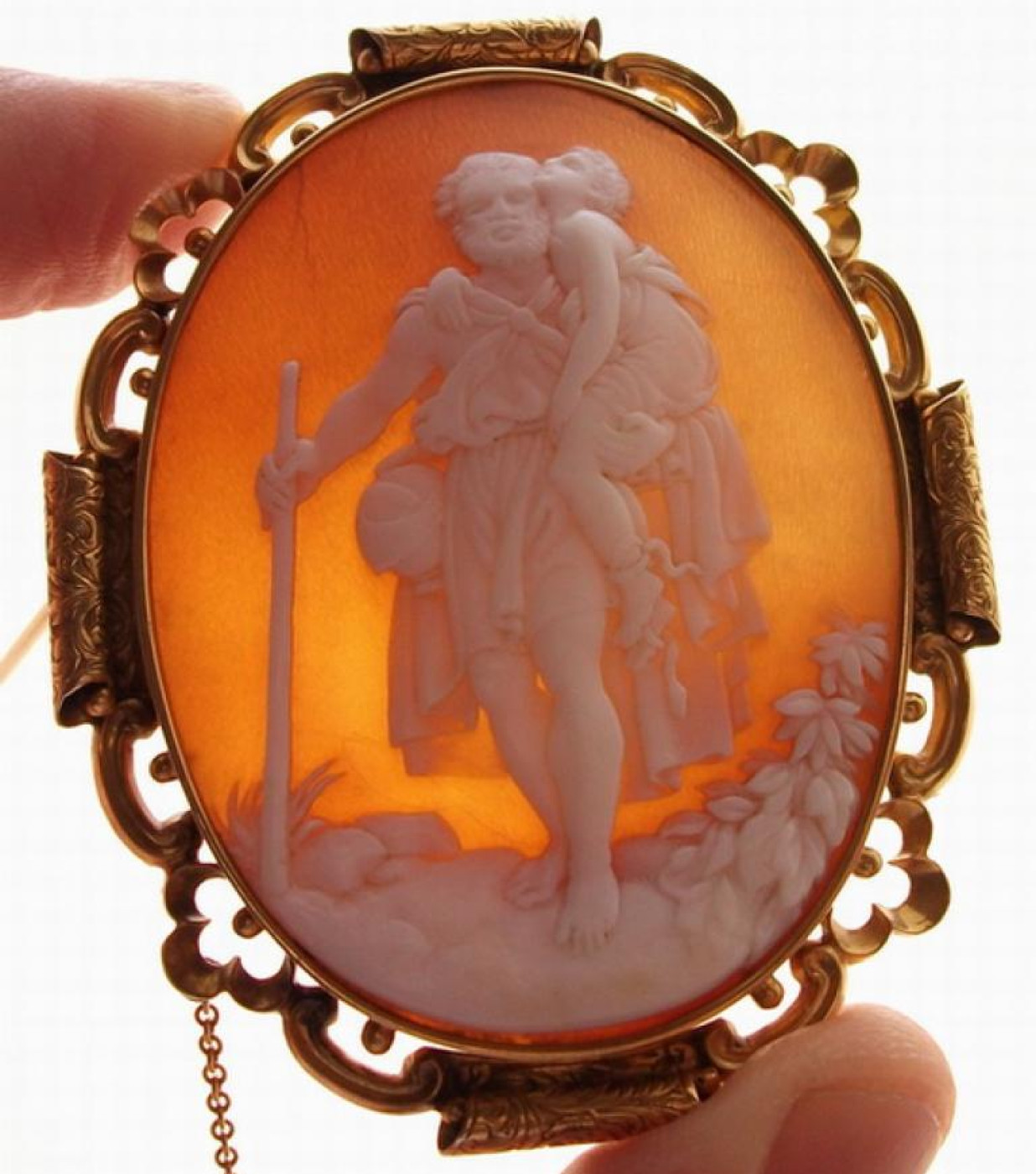 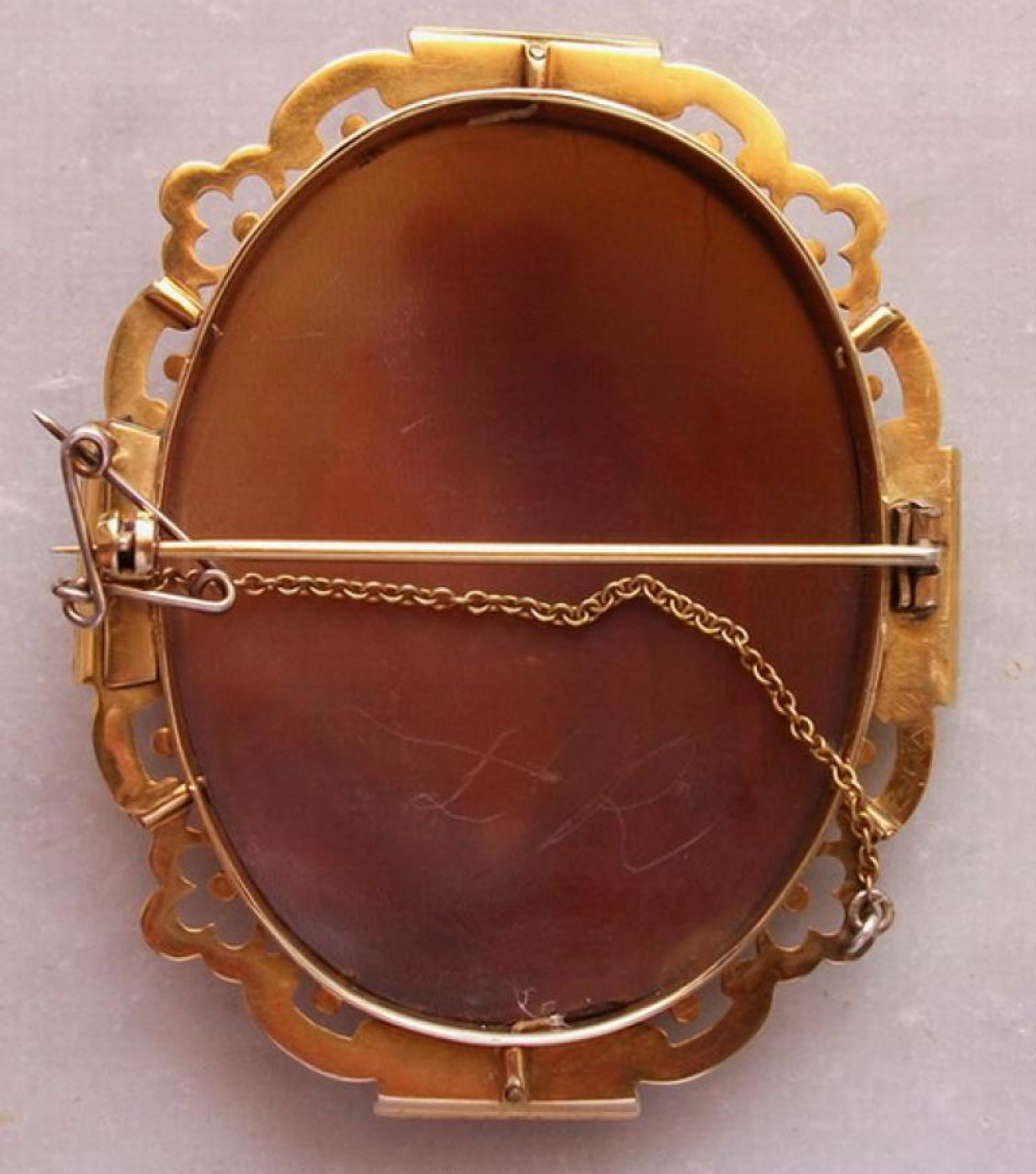 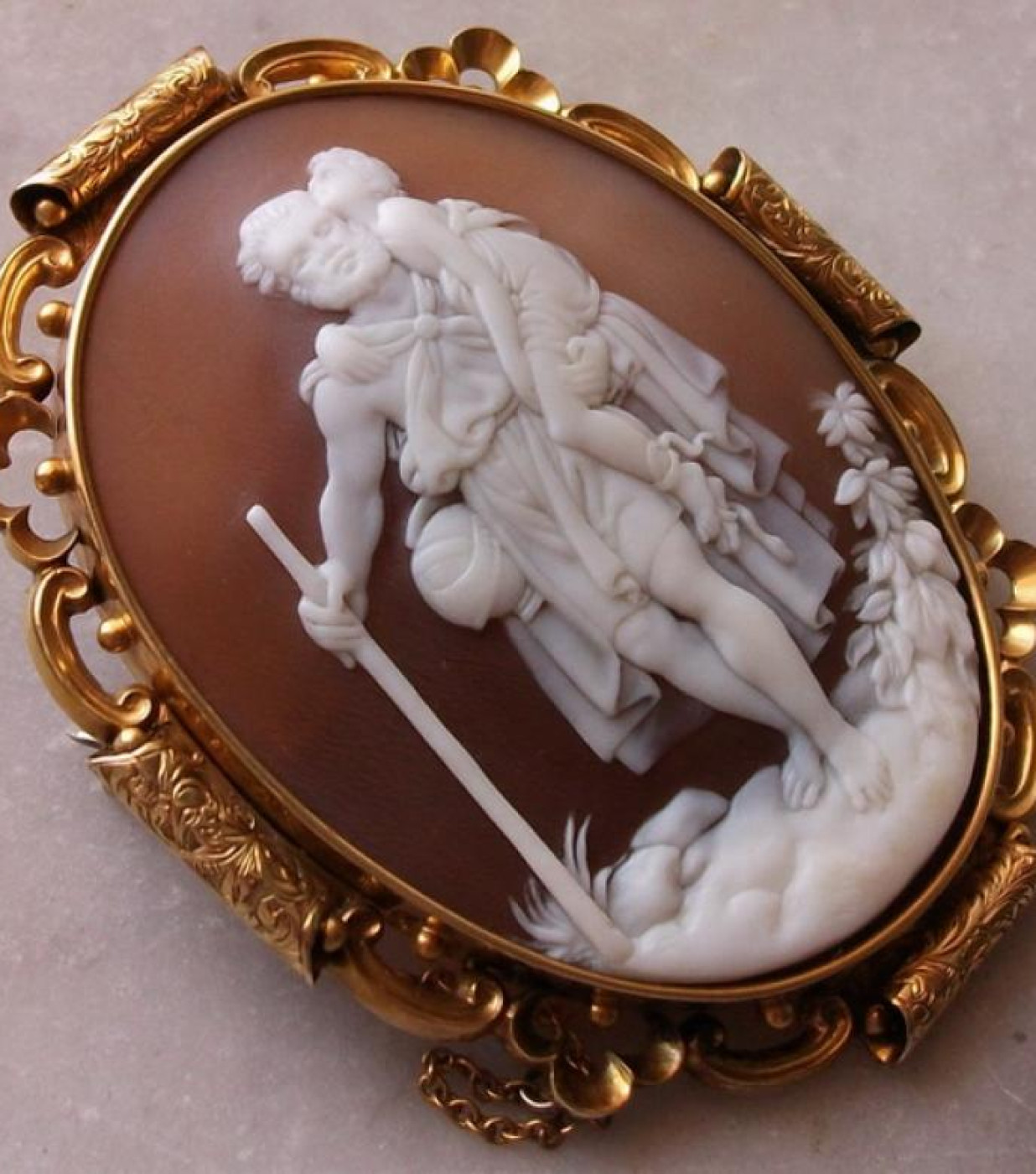 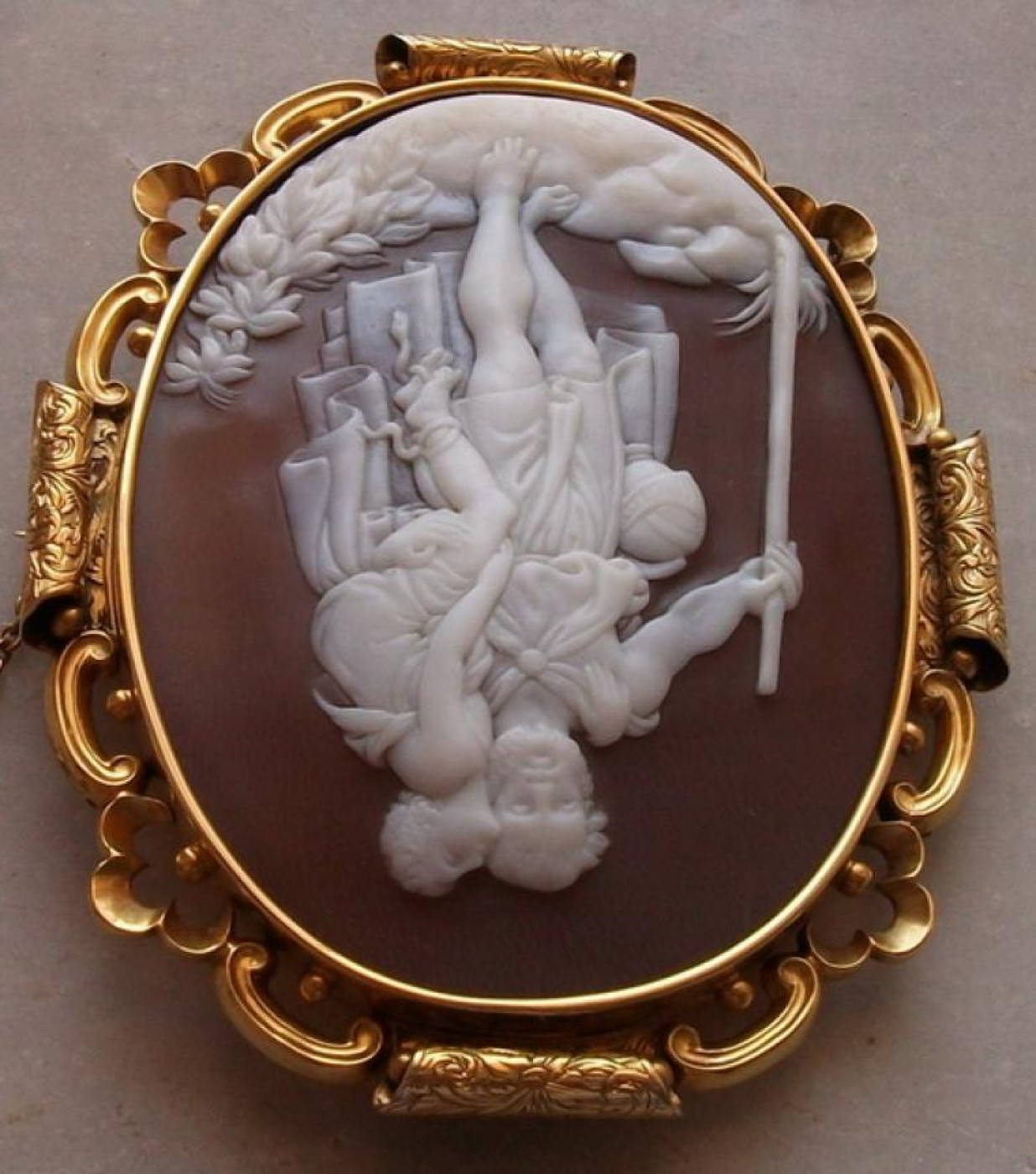 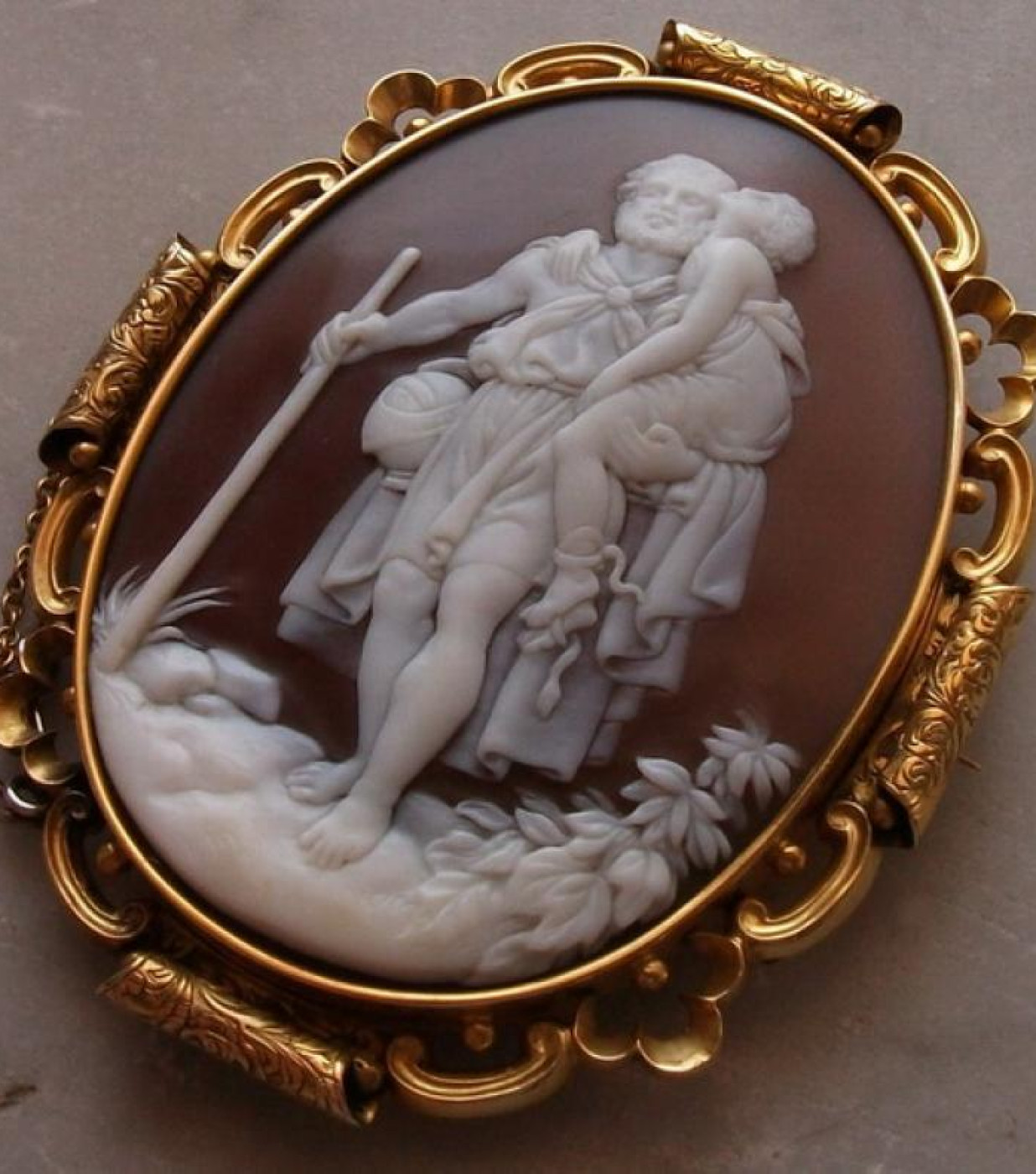 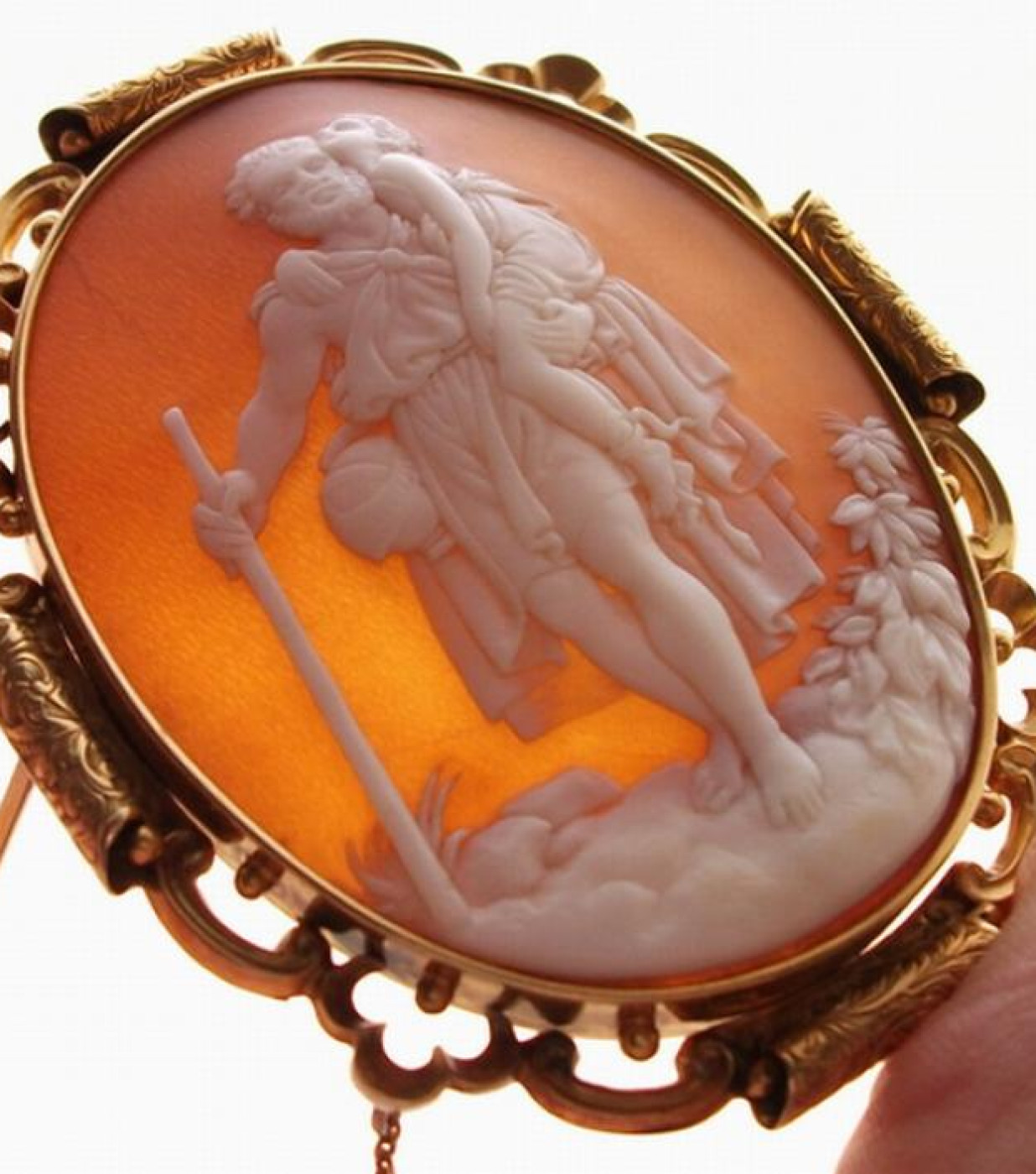 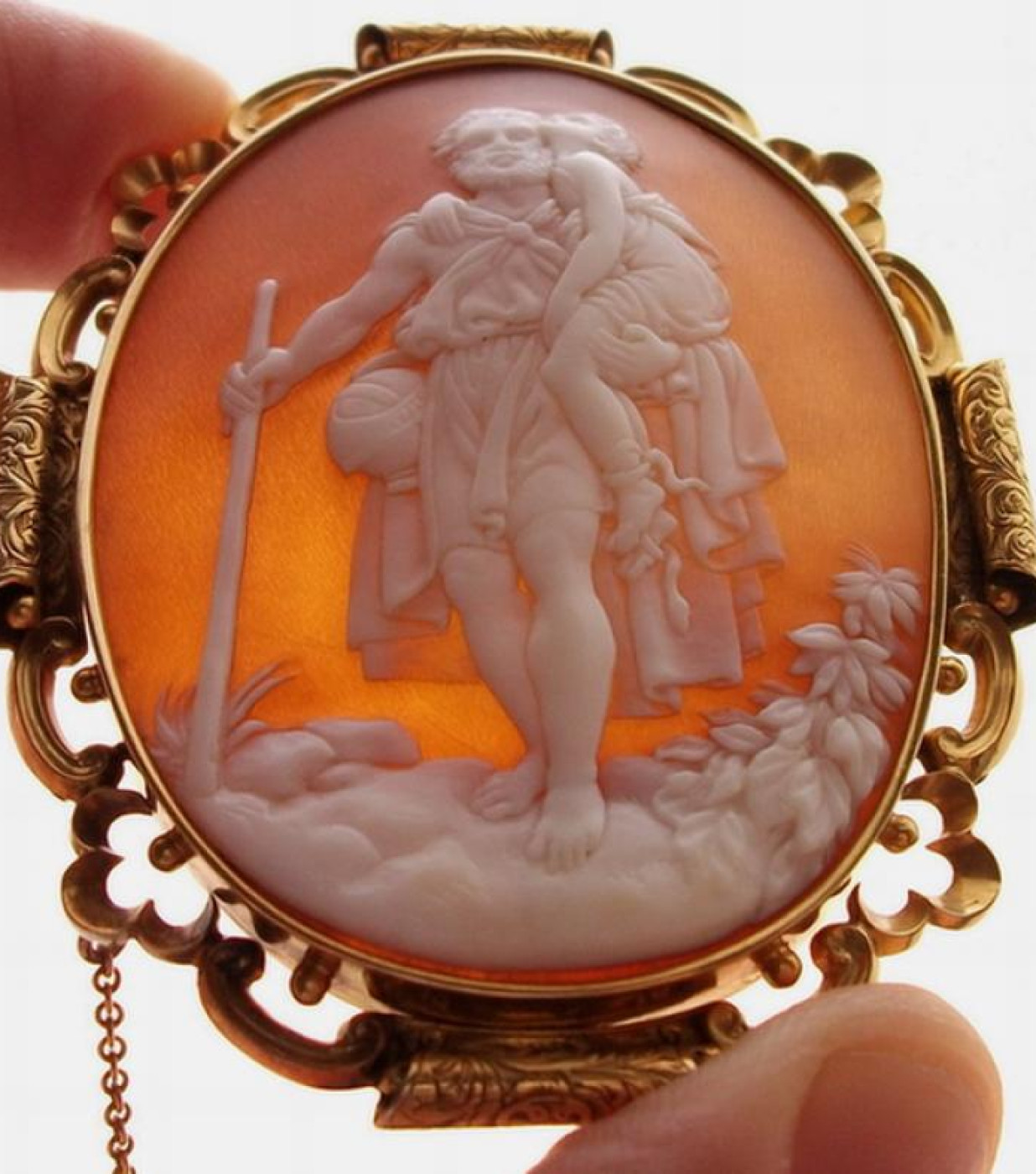 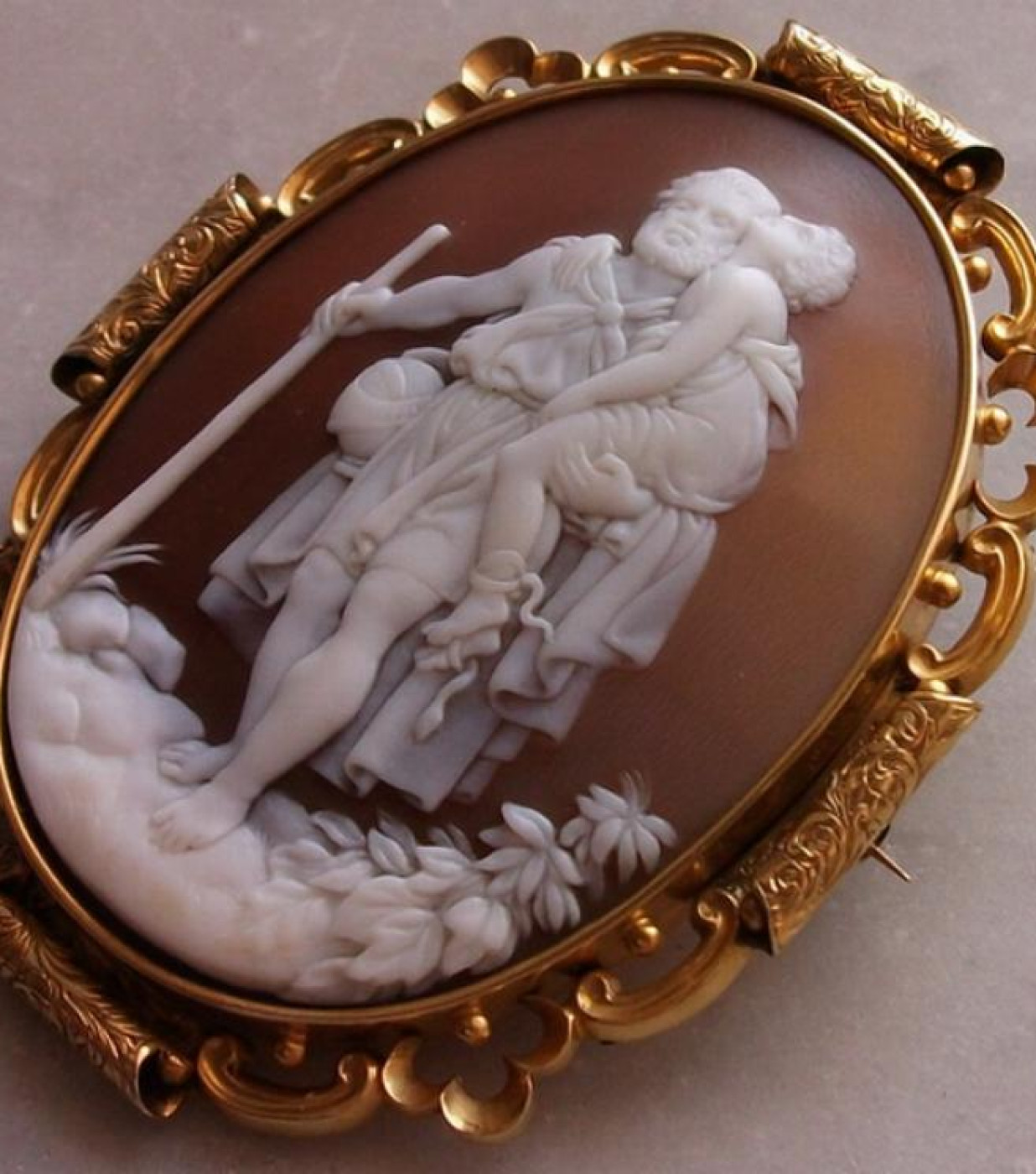 Museum Quality cameo depicting St. Christopher, a rarest subject never seen before. The details of this cameo are really amazing, making of this cameo a real work of art. The strength of St. Christopher is clearly shown and magnificently rendered. Look then at the infant Jesus and at how his tiredness is rendered, everything in this cameo is amazing. The face of the Saint is just not handsome, just it is described in any story about him. I have not found yet the painting from which the cameo is from, however in my opinion, this cameo has something of different from the usual depictions of the Saint carrying the infant Jesus, there are snakes around Jesus' legs and I have never seen them in all the St. Christopher depictions that I was able to find. This could be a symbolism which could recall the Temptation of Christ and that the carver wanted to add to remind us that temptation and sin are always behind the corner. This is a masterly carved cameo enhanced by an elaborate and rich frame. A true rarest find.
A bit of history:
Saint Christopher is a saint venerated by Orthodox Christians, listed as a martyr killed in the reign of the 3rd century Roman emperor Decius (reigned 249–251). Historical examination of the legends suggests Reprobus (Christopher) lived during the Christian persecutions of either the Roman emperor Decius or Diocletian, and that he was captured and martyred by the governor of Antioch Historian David Woods has proposed that Christopher's remains were possibly taken to Alexandria by Peter of Attalia where he may have become identified with the Egyptian martyr Saint Menas. Christopher was a Canaanite 5 cubits (7.5 ft) tall and with a fearsome face. While serving the king of Canaan, he took it into his head to go and serve the greatest king there was. He went to the king who was reputed to be the greatest, but one day he saw the king cross himself at the mention of the devil. On thus learning that the king feared the devil, he departed to look for the devil. He came across a band of marauders, one of whom declared himself to be the devil, so Christopher decided to serve him. But when he saw his new master avoid a wayside cross and found out that the devil feared Christ, he left him and enquired from people where to find Christ. He met a hermit who instructed him in the Christian faith. Christopher asked him how he could serve Christ. When the hermit suggested fasting and prayer, Christopher replied that he was unable to perform that service. The hermit then suggested that because of his size and strength Christopher could serve Christ by assisting people to cross a dangerous river, where they were perishing in the attempt. The hermit promised that this service would be pleasing to Christ. After Christopher had performed this service for some time, a little child asked him to take him across the river. During the crossing, the river became swollen and the child seemed as heavy as lead, so much that Christopher could scarcely carry him and found himself in great difficulty. When he finally reached the other side, he said to the child: "You have put me in the greatest danger. I do not think the whole world could have been as heavy on my shoulders as you were." The child replied: "You had on your shoulders not only the whole world but Him who made it. I am Christ your king, whom you are serving by this work." The child then vanished. Christopher later visited the city of Lycia and there comforted the Christians who were being martyred. Brought before the local king, he refused to sacrifice to the pagan gods. The king tried to win him by riches and by sending two beautiful women to tempt him. Christopher converted the women to Christianity, as he had already converted thousands in the city. The king ordered him to be killed. Various attempts failed, but finally Christopher was decapitated. His name means Christ-bearer (Greek: christos, Christ, pherein, to bear) (Latin:Christophorus, Christbearer)