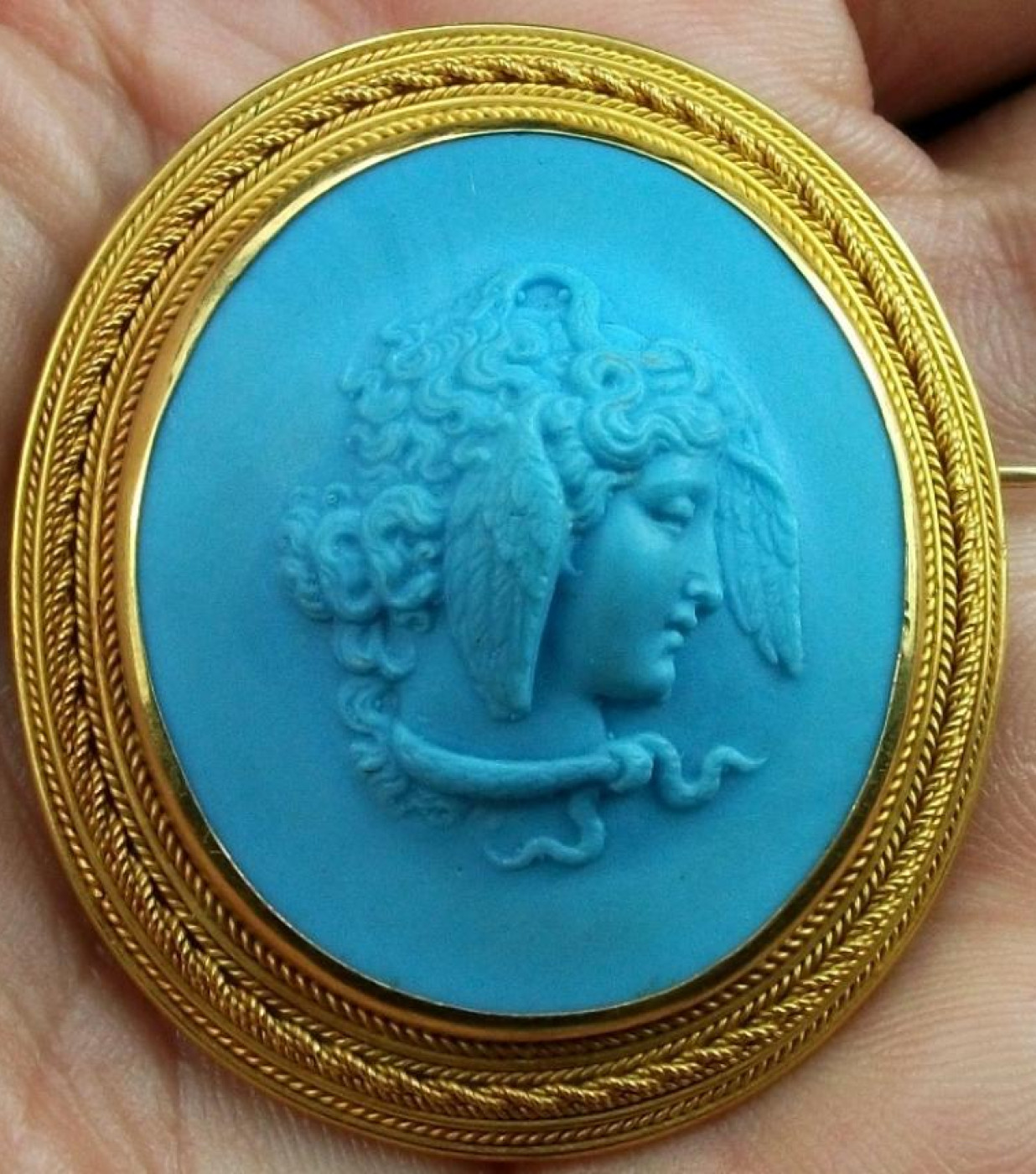 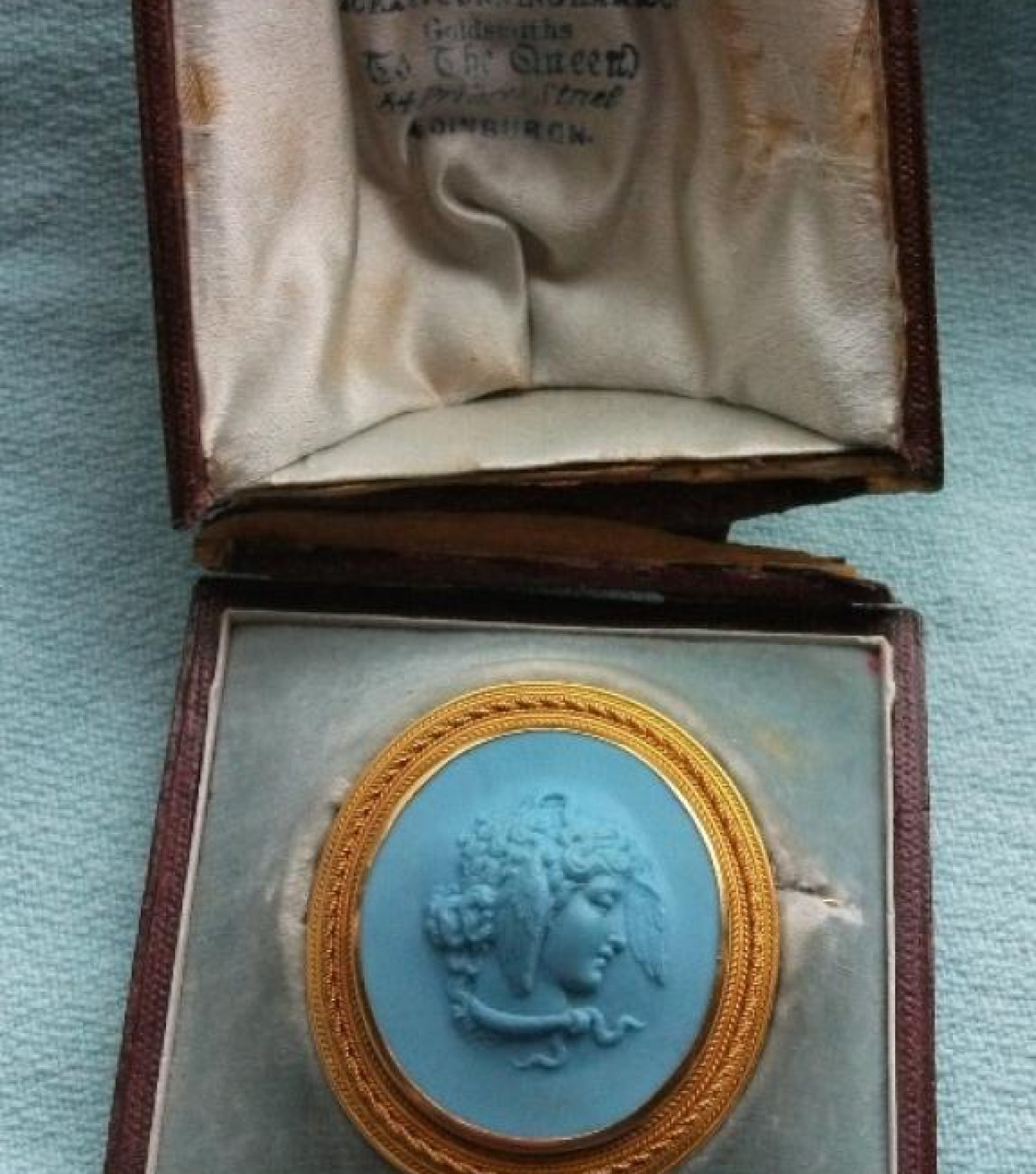 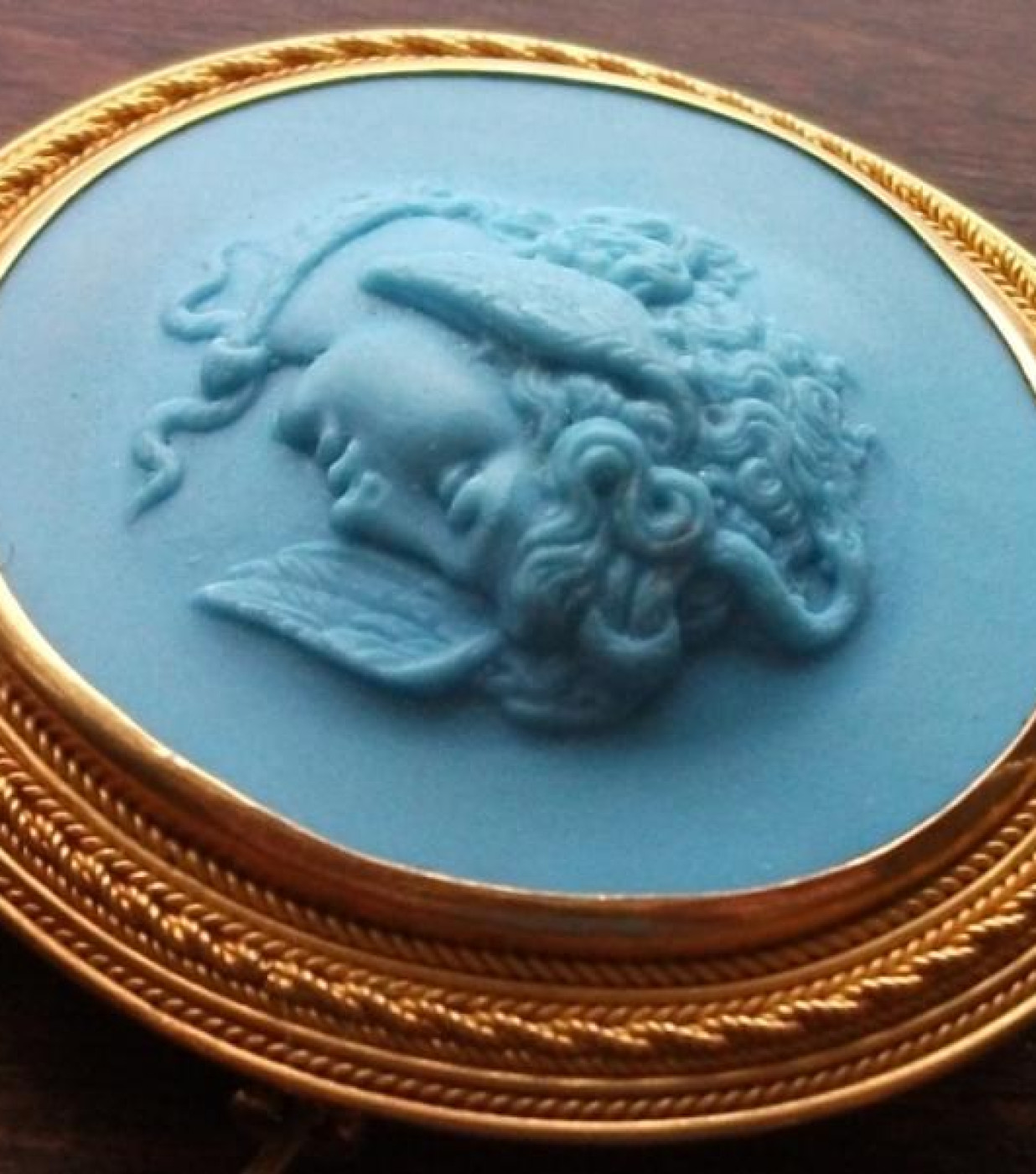 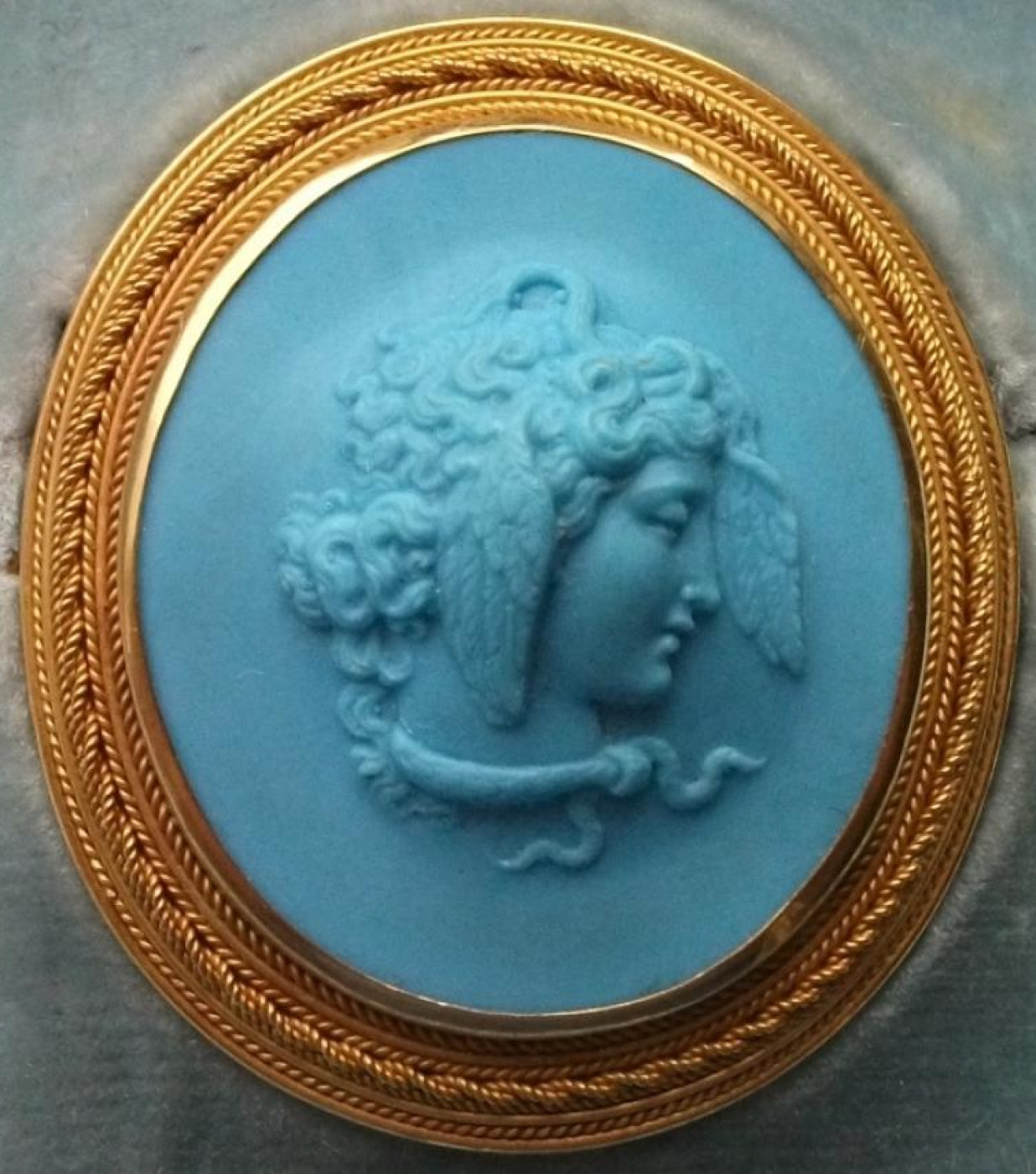 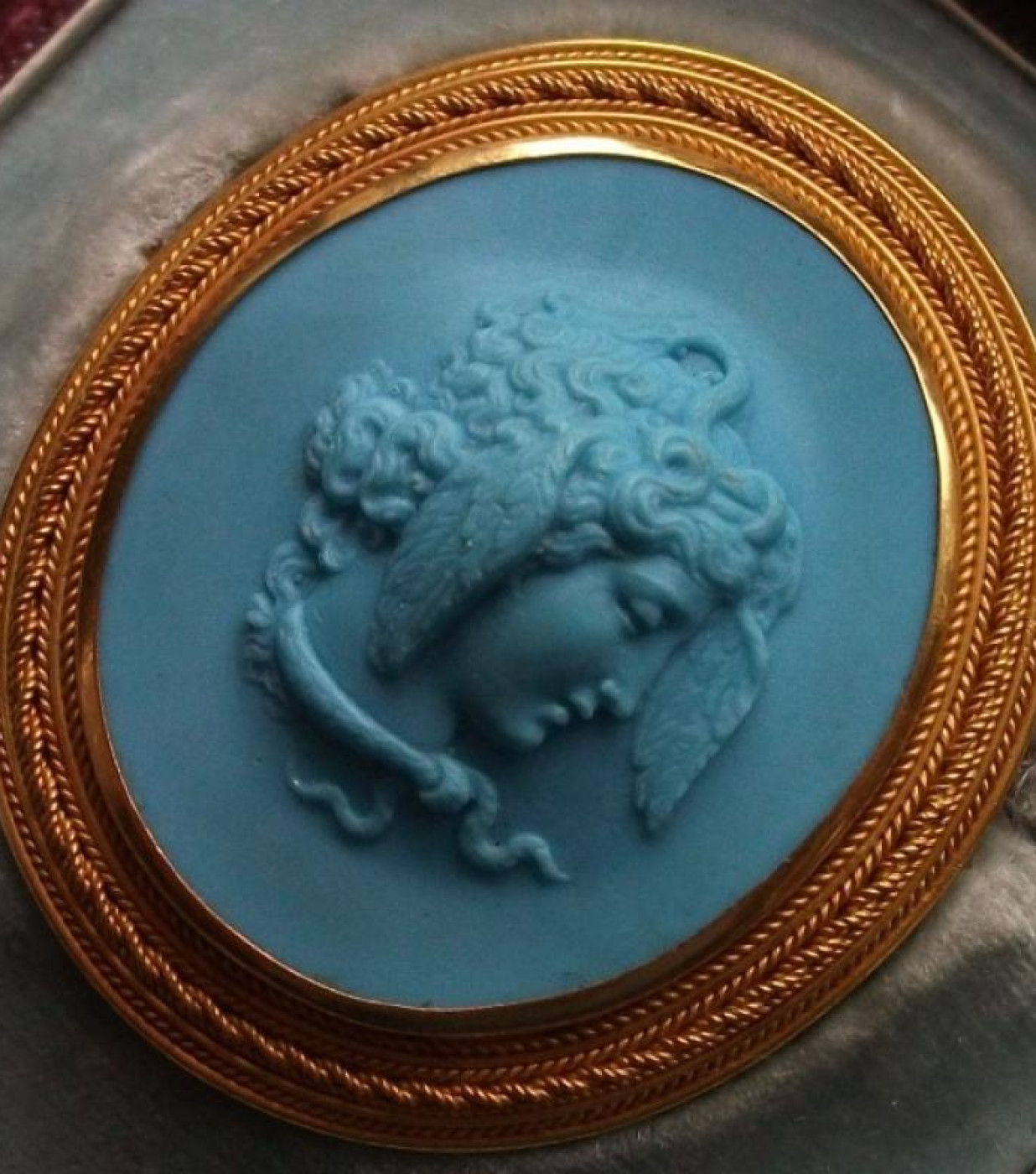 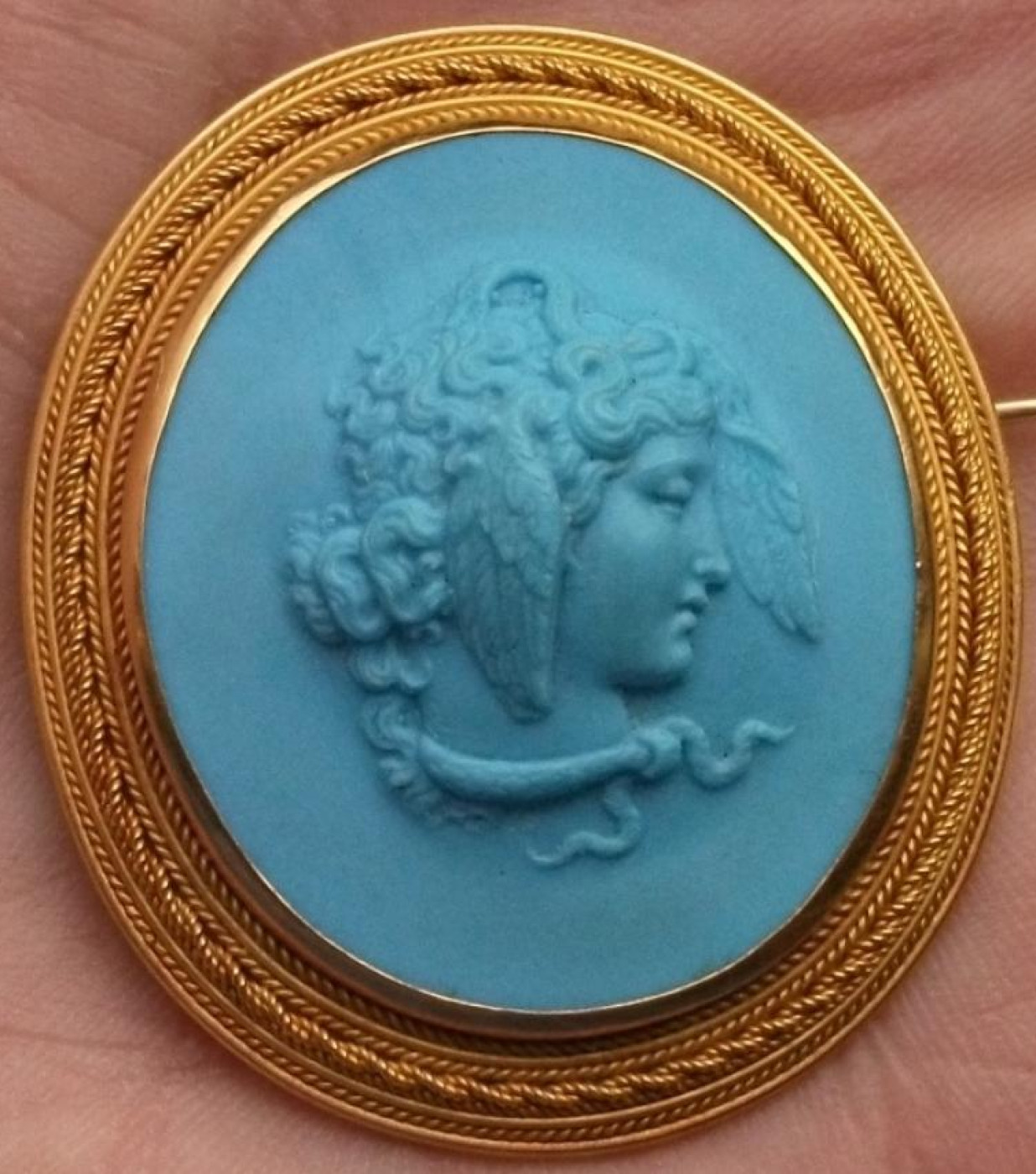 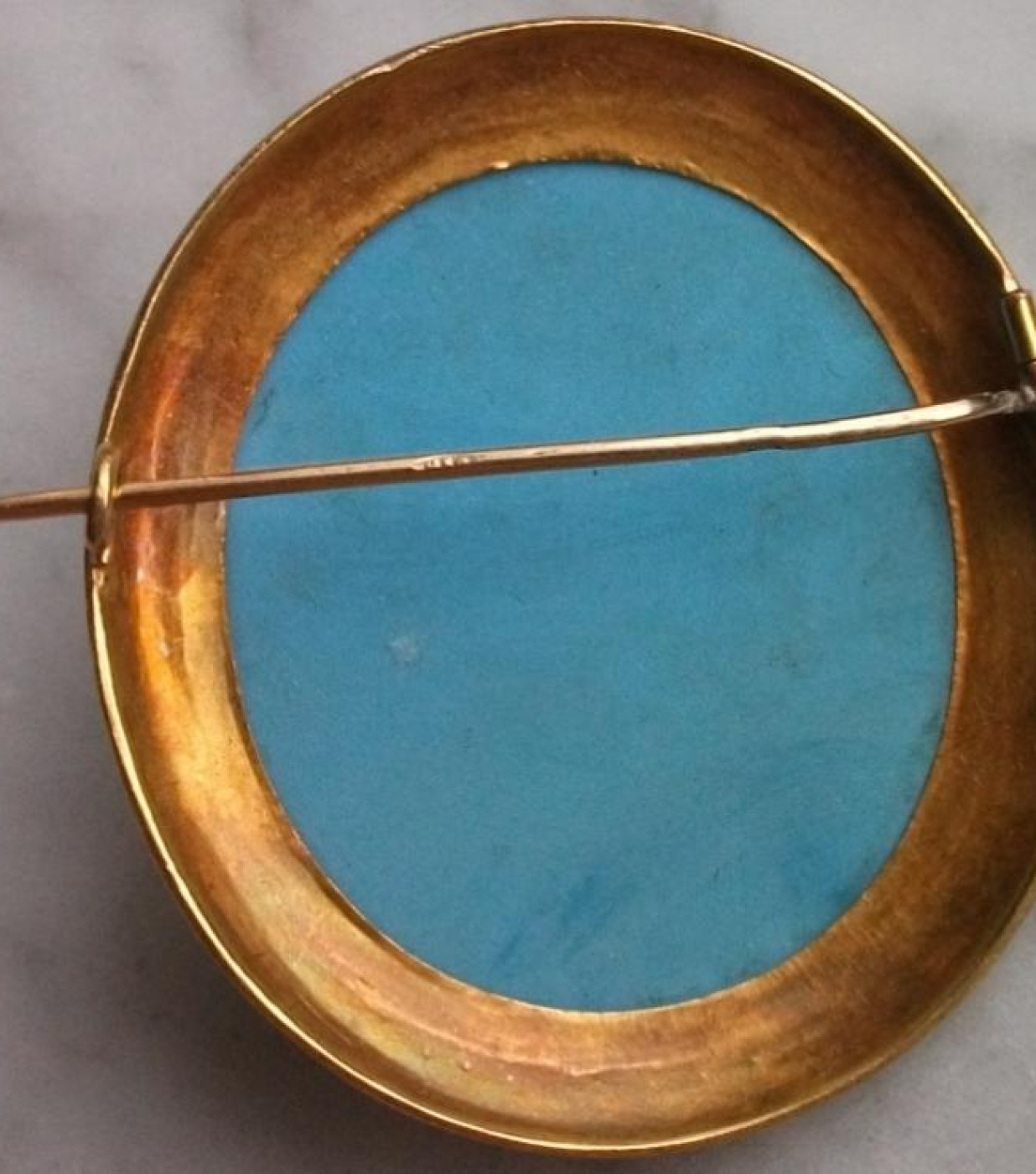 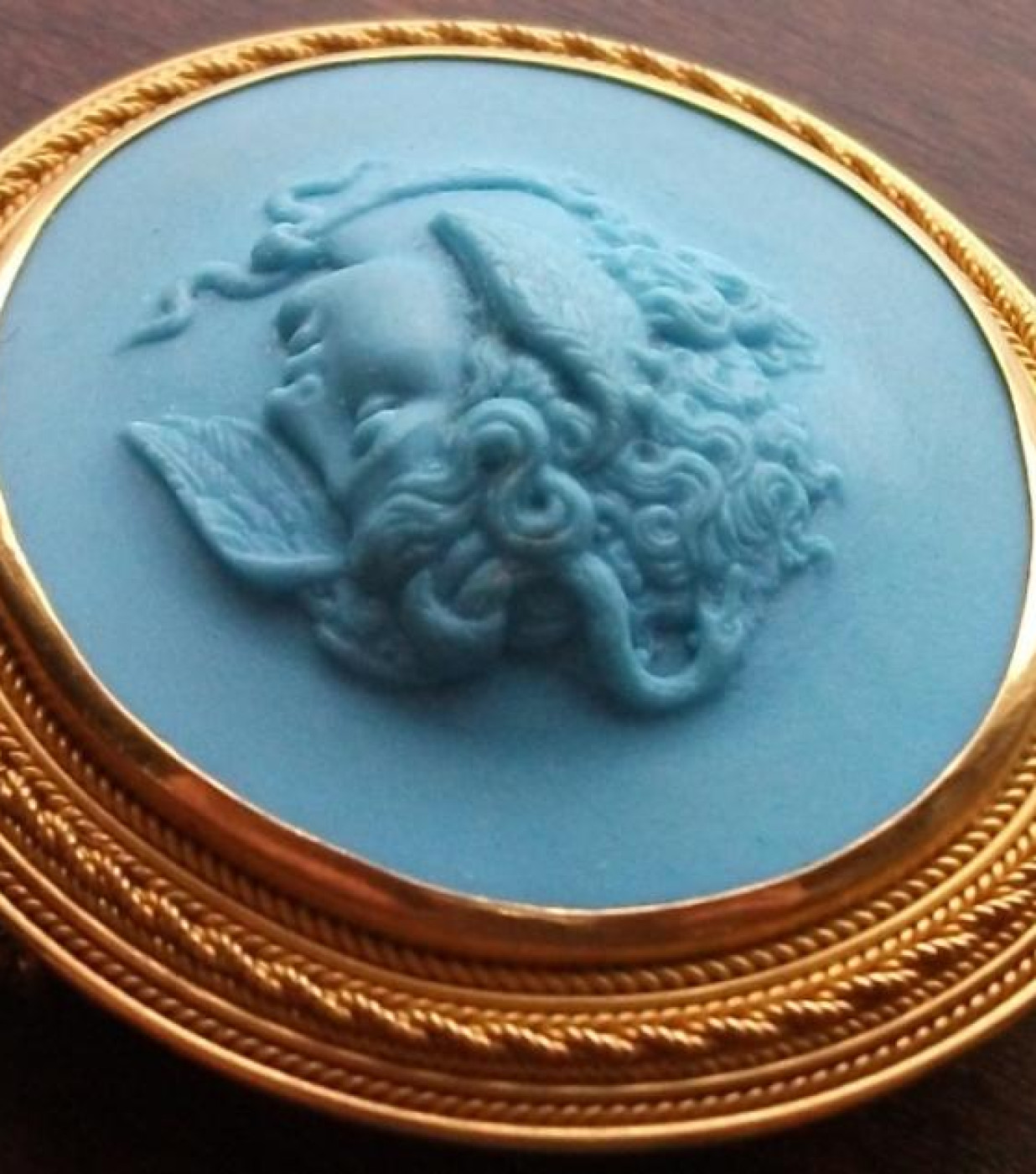 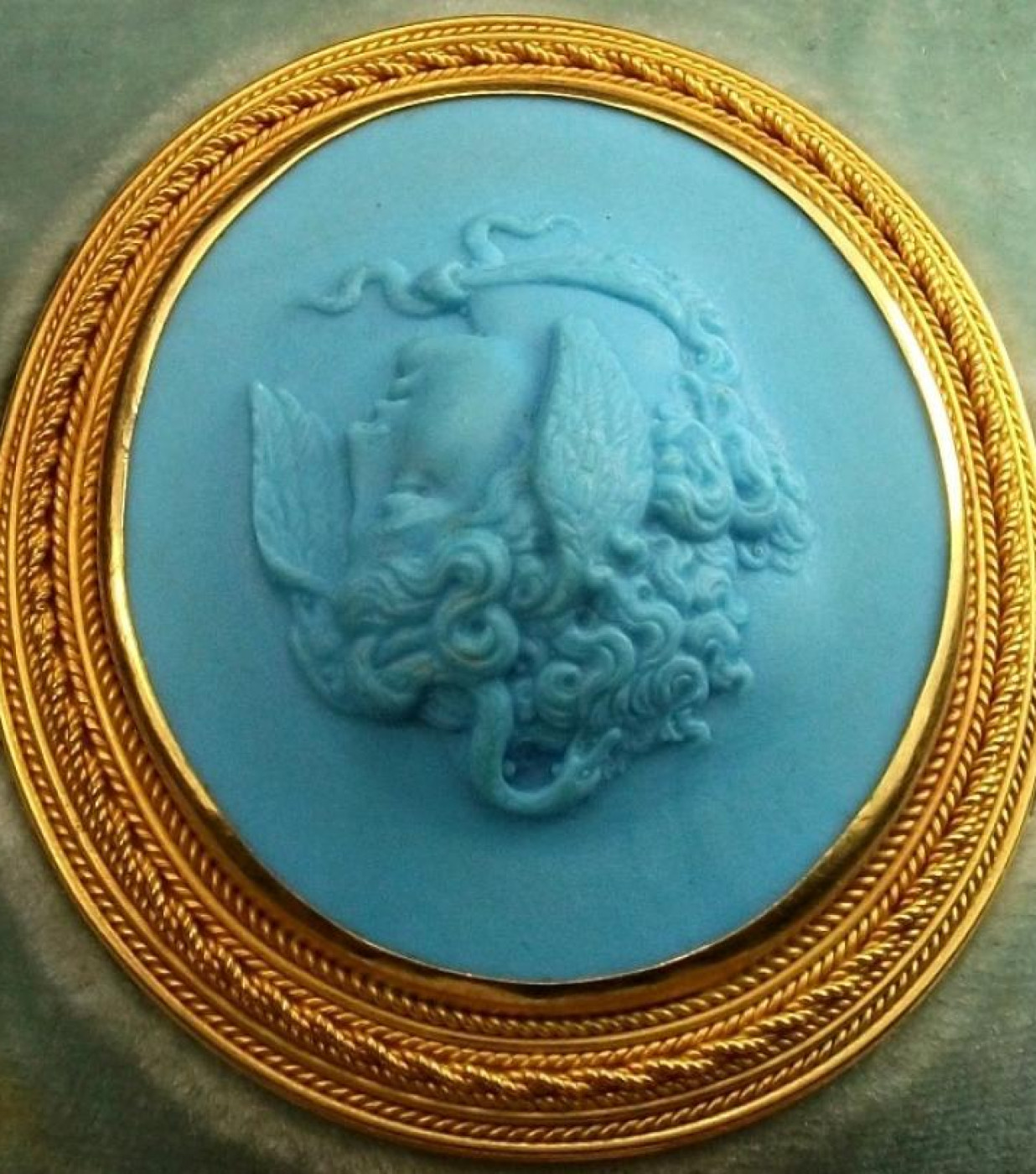 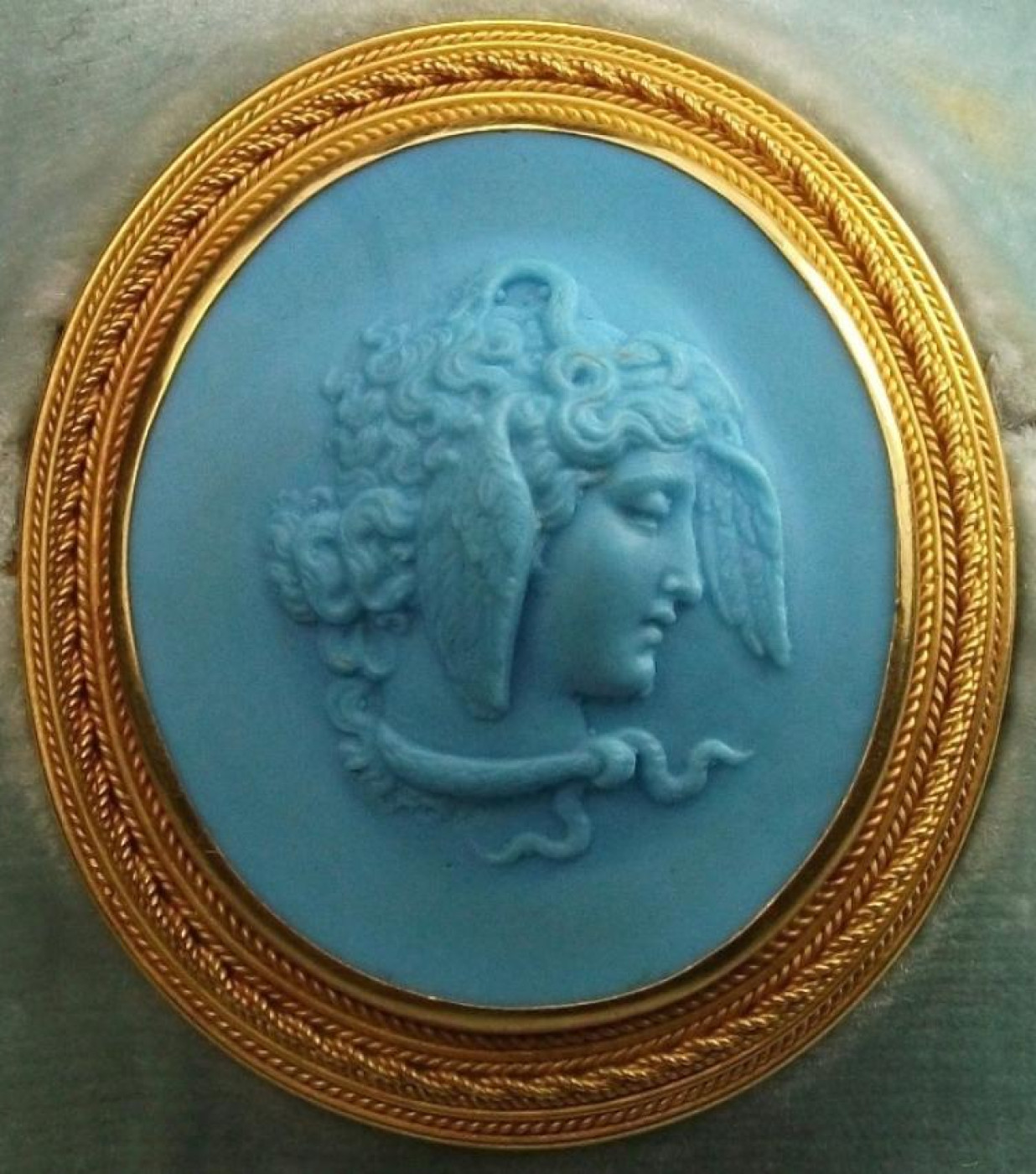 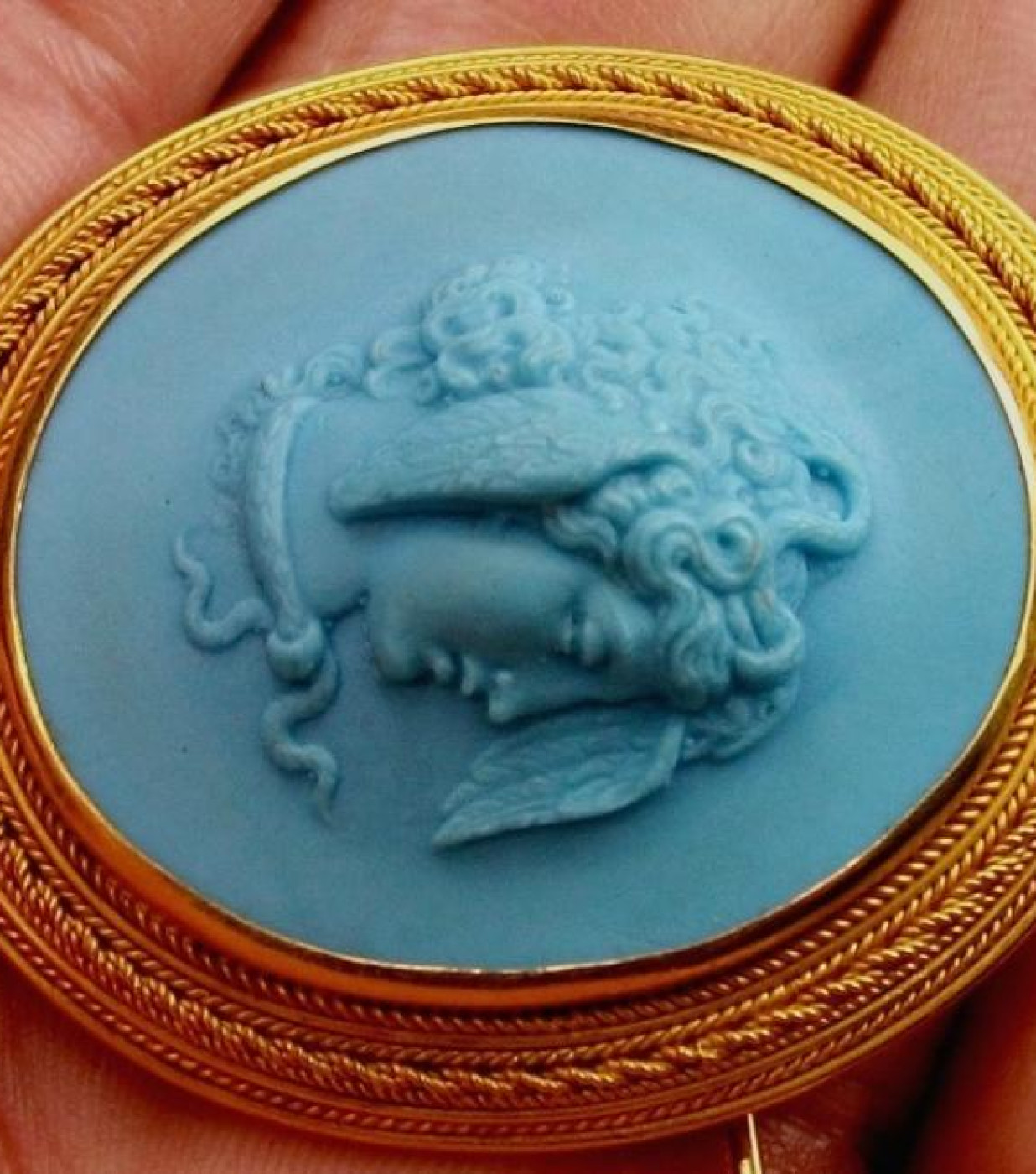 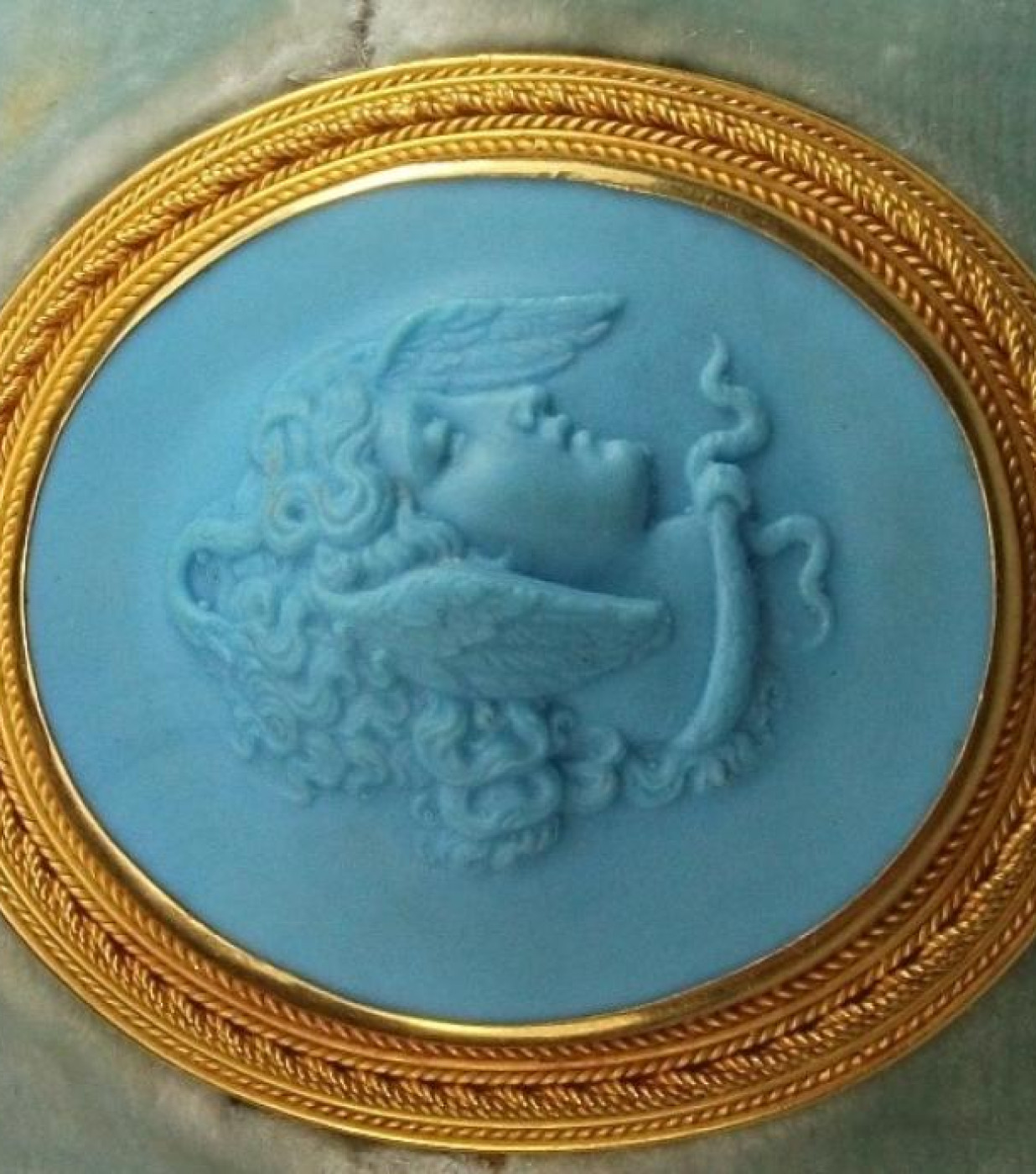 Museum Quality cameo depicting the gorgon Medusa. This is rare because finding a Medusa depicted on turquoise glass and so finely carved is not usual and even more rare finding this is so mint conditions and with a so wonderful Etruscan revival frame, more it has its original fitted case. This one is a particular cameo, it is not hand carved it is a moulded cameo. The technique to make moulded cameos was often used in the past times and it was very difficult to do. This cameo was probably moulded from another one made of hard stone or lava, usually on those two stones the carving was very relieved and this allowed to take a perfect mould of the subject. After other steps the artist poured in the mould the material chosen to make the cameo. When the material was perfectly dry, the moulded piece was taken off from the mould and refined.  The original carving is very fine and all the details are finely made,  The carver, on the original cameo, was able to give to this subject a facial expression that really expresses pain and sorrow. Everyone, I think, knows the history of Medusa, (for the ones who don't know about her please read below) so it easy to understand why she's so afflicted and this detail is shown very well in this cameo. Her eye not completely closed or not completely open, depends on the point of view, reveals almost fear as she is scared to look at her new reality and because she knows that her life is close to her end.  Everything is masterly carved, her hair, her wings and also the snakes in her hair and around her neck. Look also at the wonderful contrast between the intense color of the turquoise glass and the color of the gold, it is really amazing and pretty. The frame too is another artwork, so intricate and elaborate, made by very patient hands so hard to find today. A true artwork to collect.

A bit of history:
Medusa is a  character of Greek's mythology, she was one of three Gorgons, the only one that was mortal. Poseidon fell in love with Medusa and one night he took her in a temple consecrated to Athena to consummate their love. Athena offended, transformed Medusa's hair into snakes and again everyone that had looked Medusa's eyes would have been petrified. Medusa was killed by Perseus who cut her head looking at her through a bright shield received from Athena. From Medusa's body came out Pegasus, the mythic winged horse, and Crisaore generated with the union with Poseidon. For this reason Medusa's head was given by Perseus to Athena who put it in the center of her aegis. Aegis used by Athena, is a fringed armour or a shield with Medusa's head in the center.