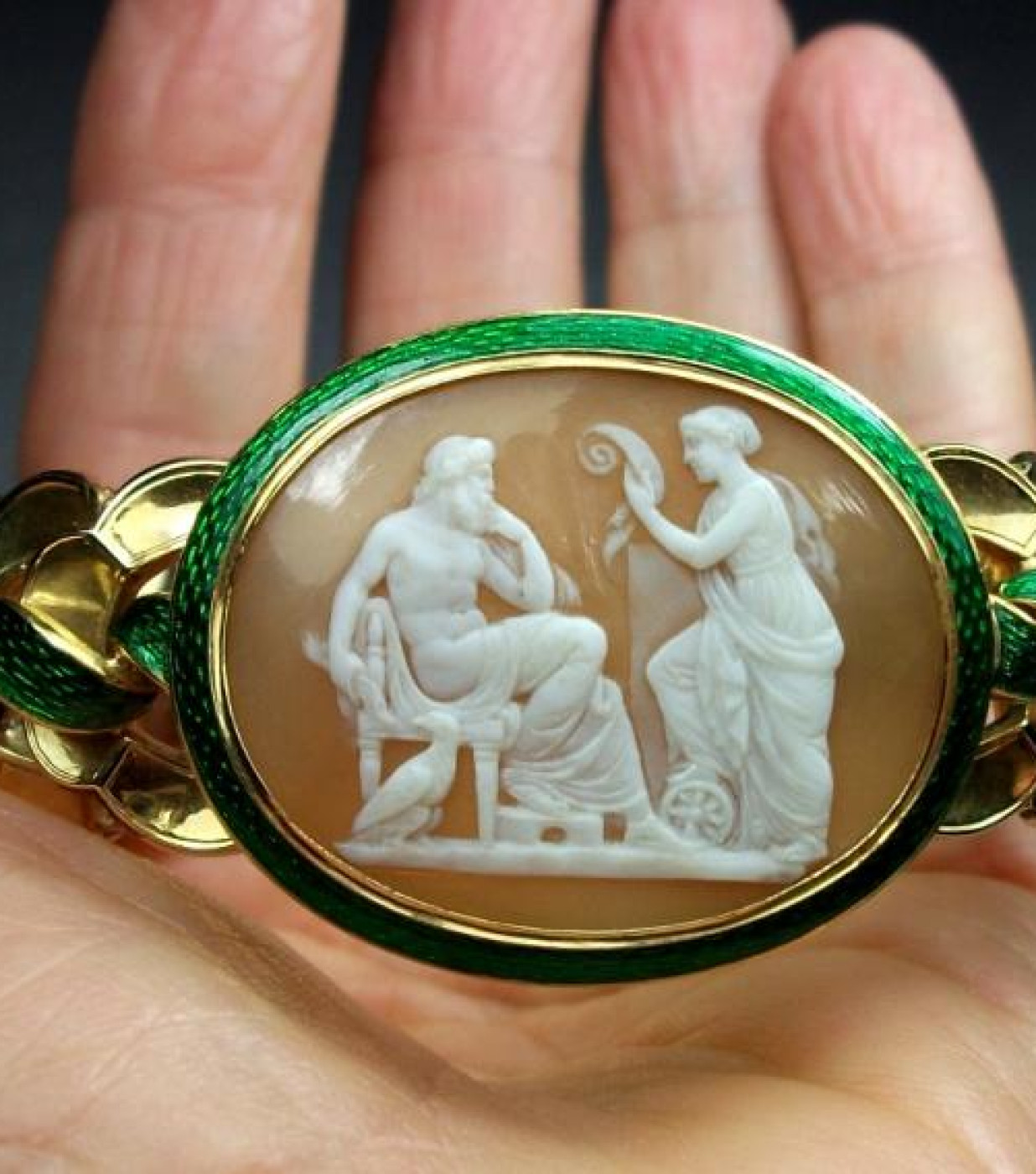 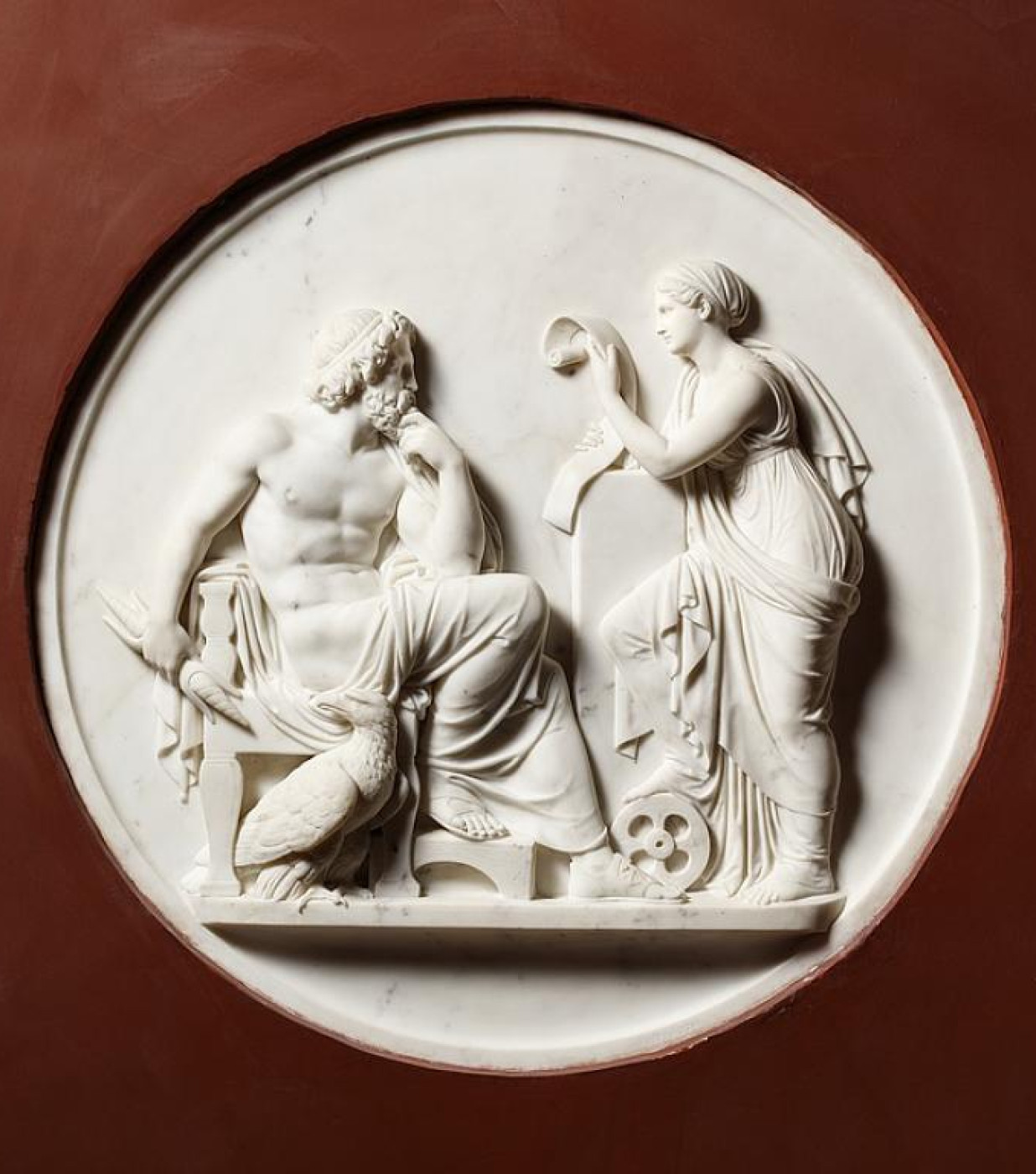 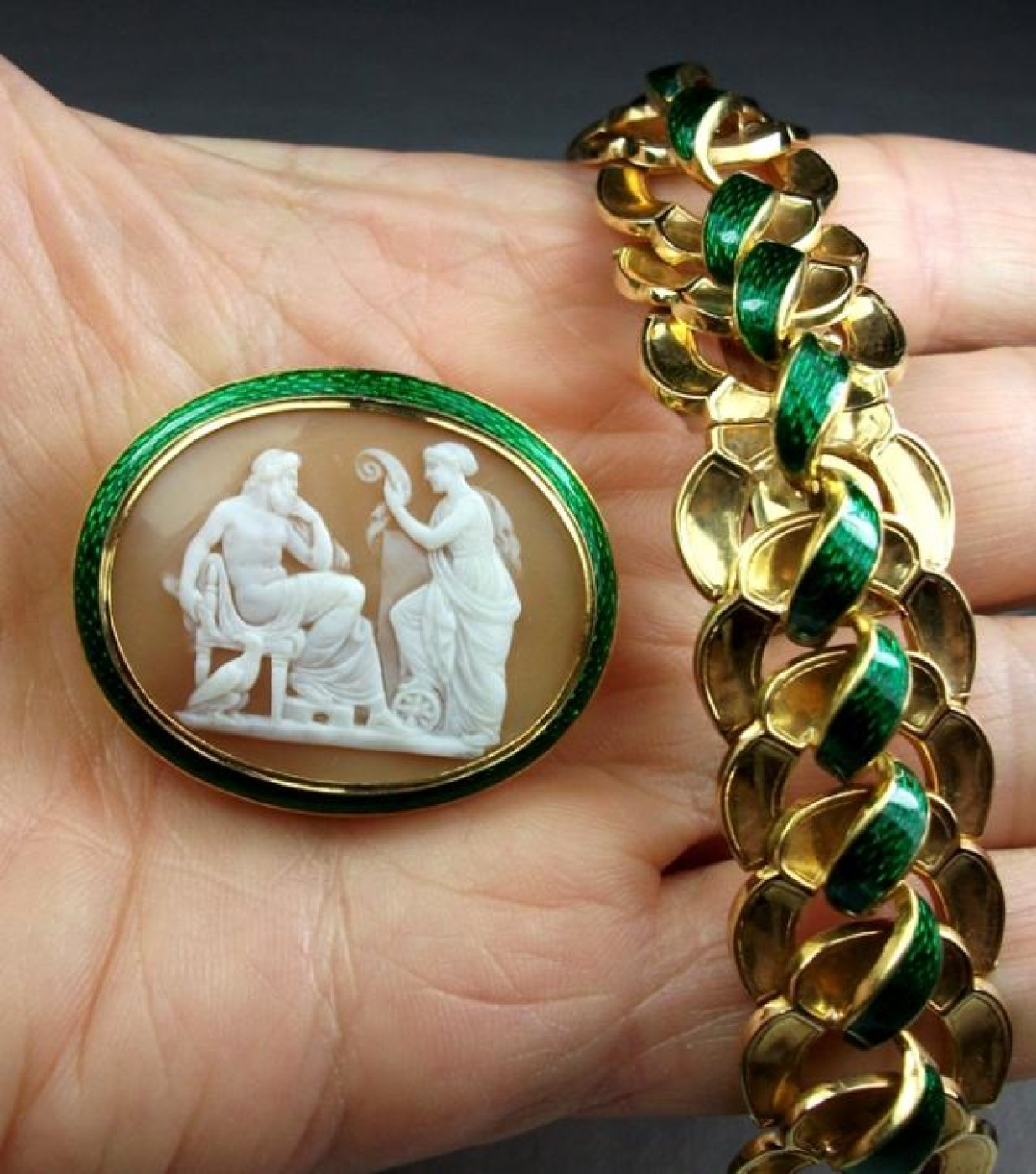 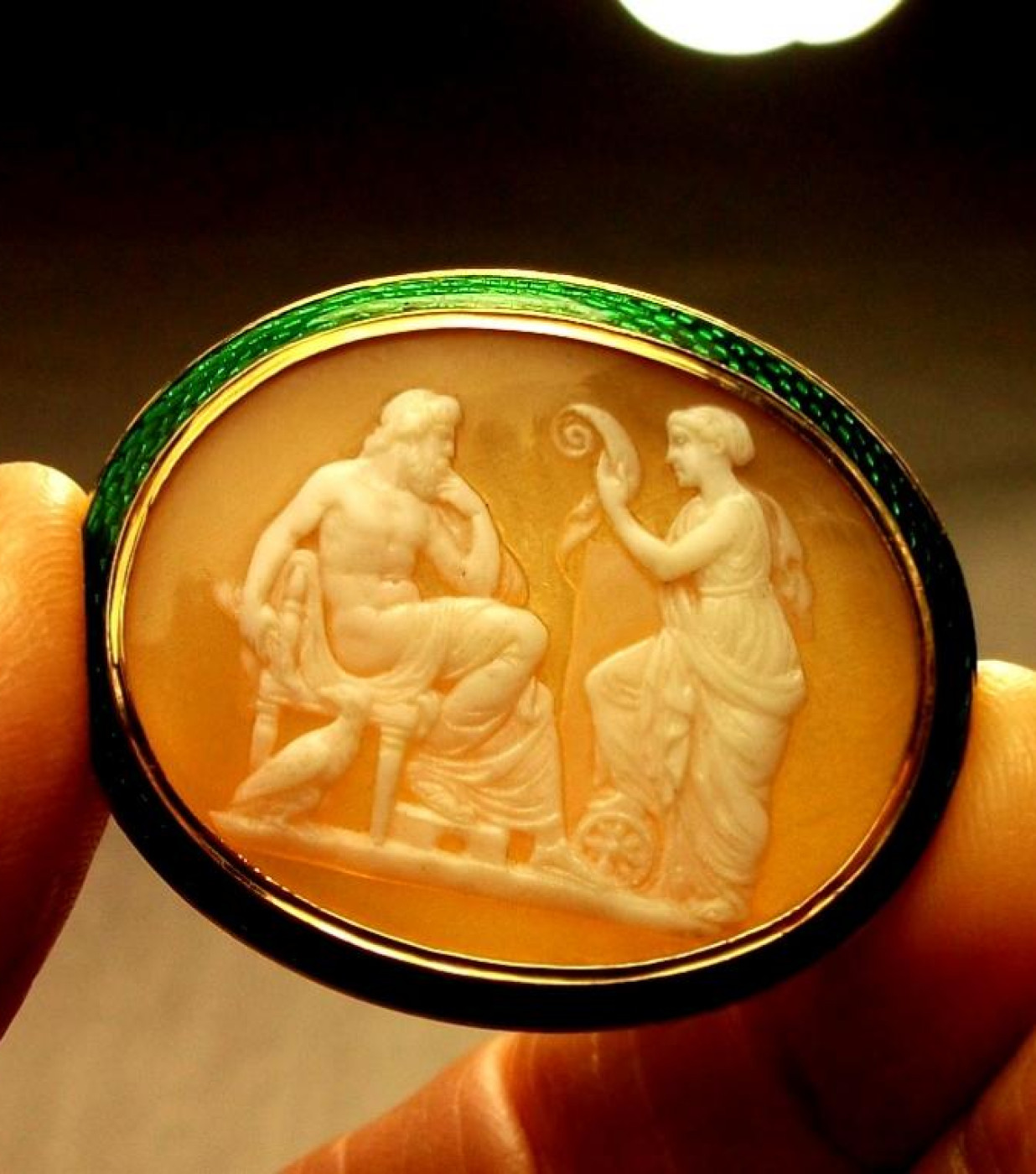 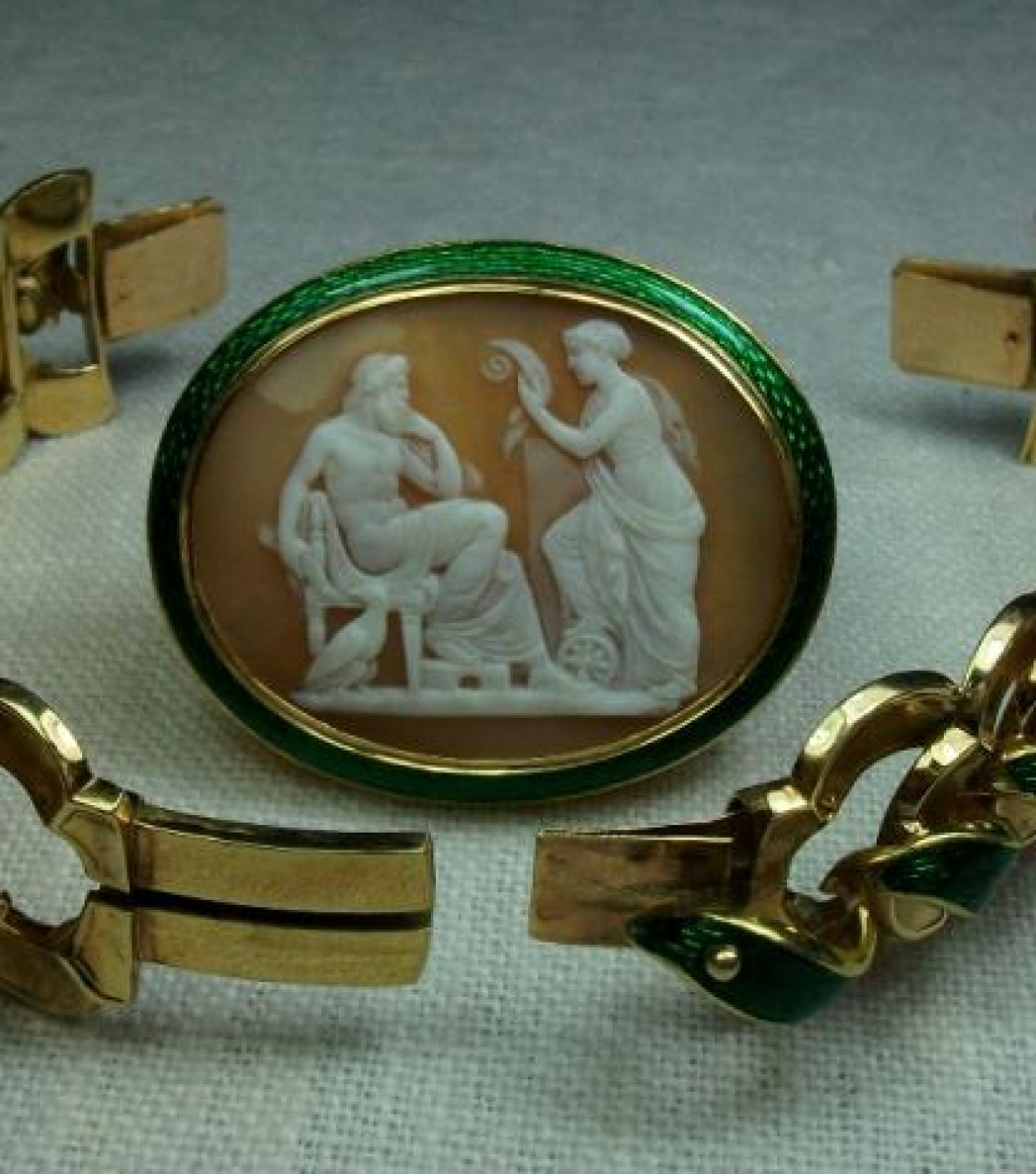 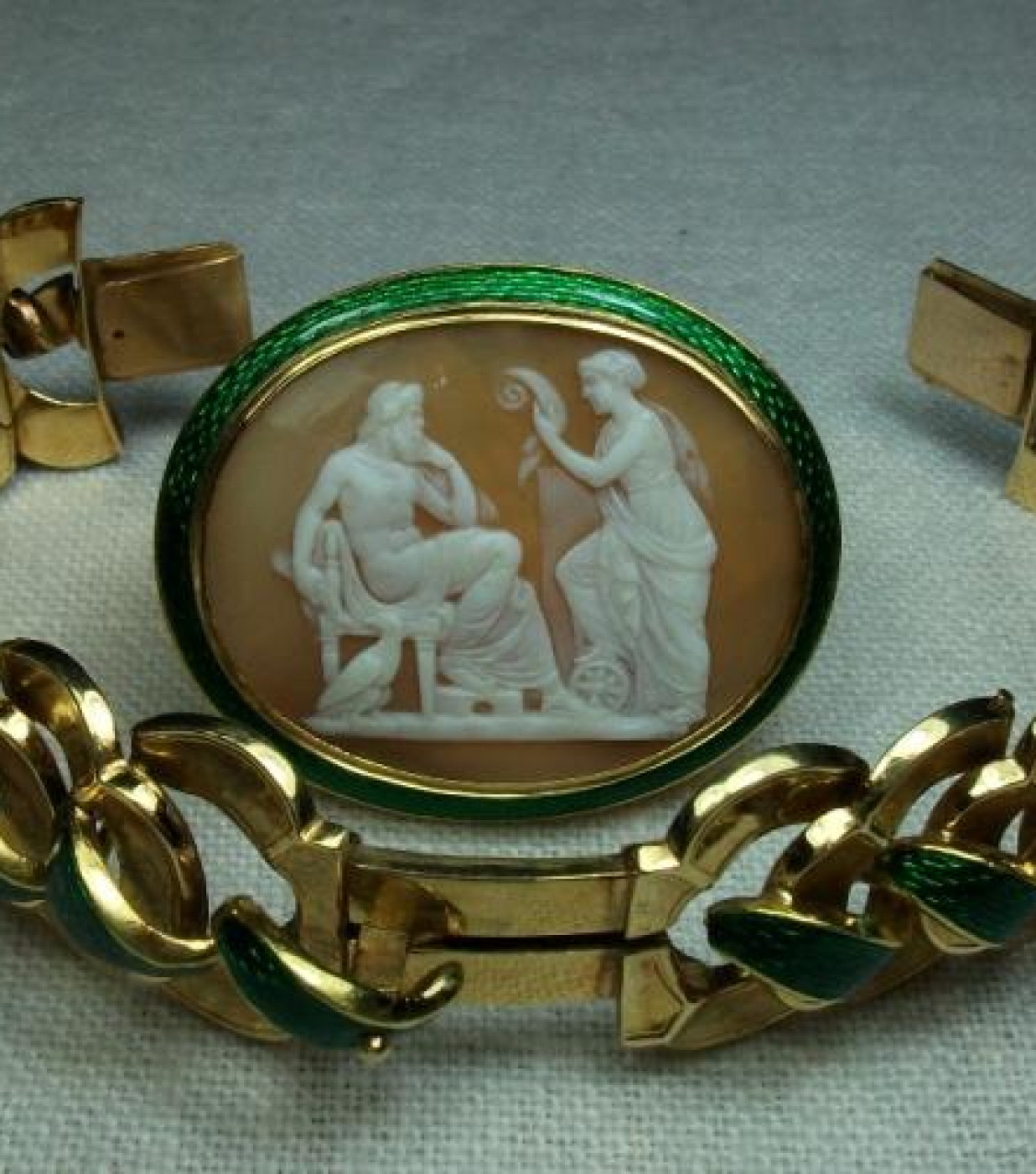 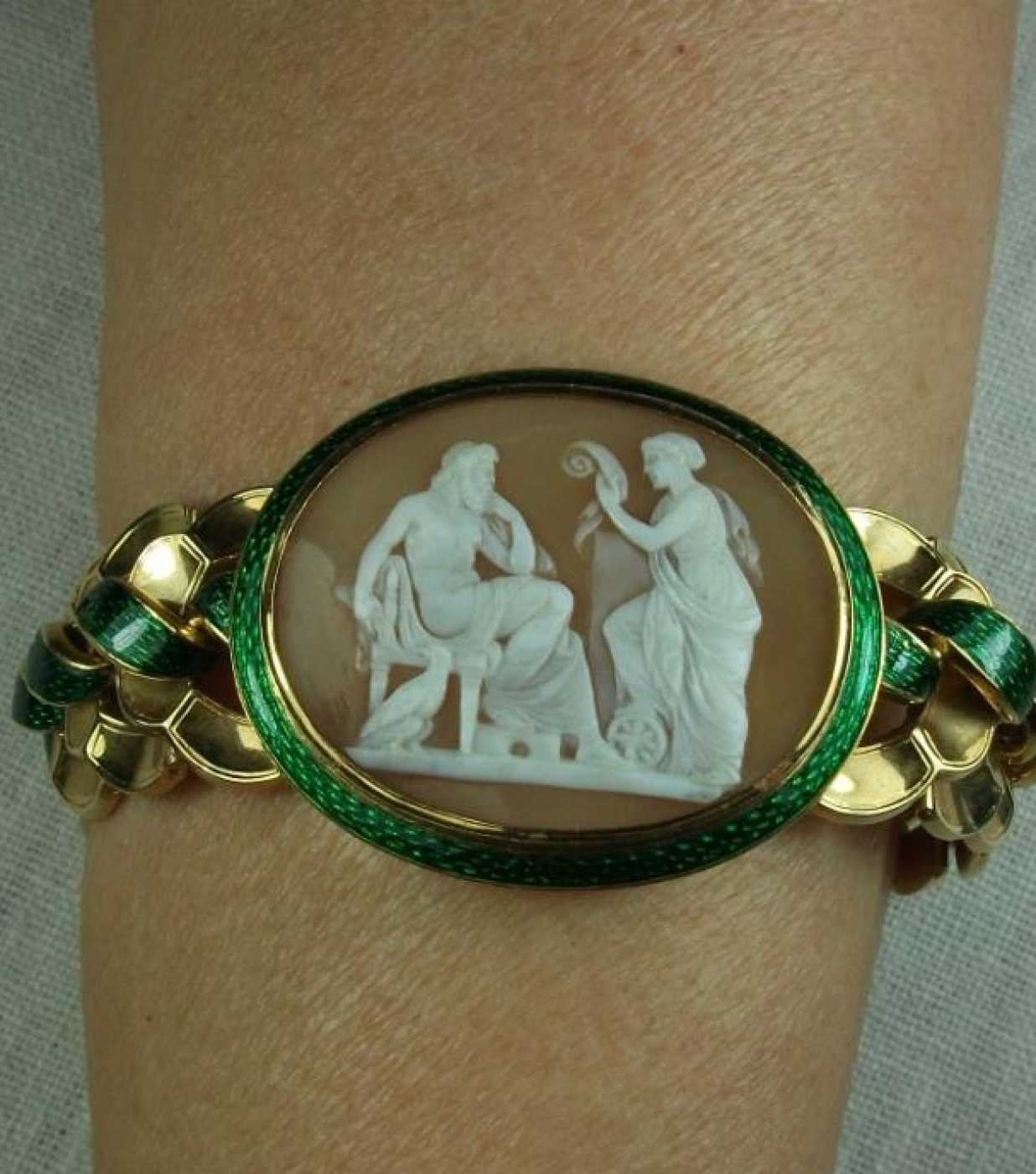 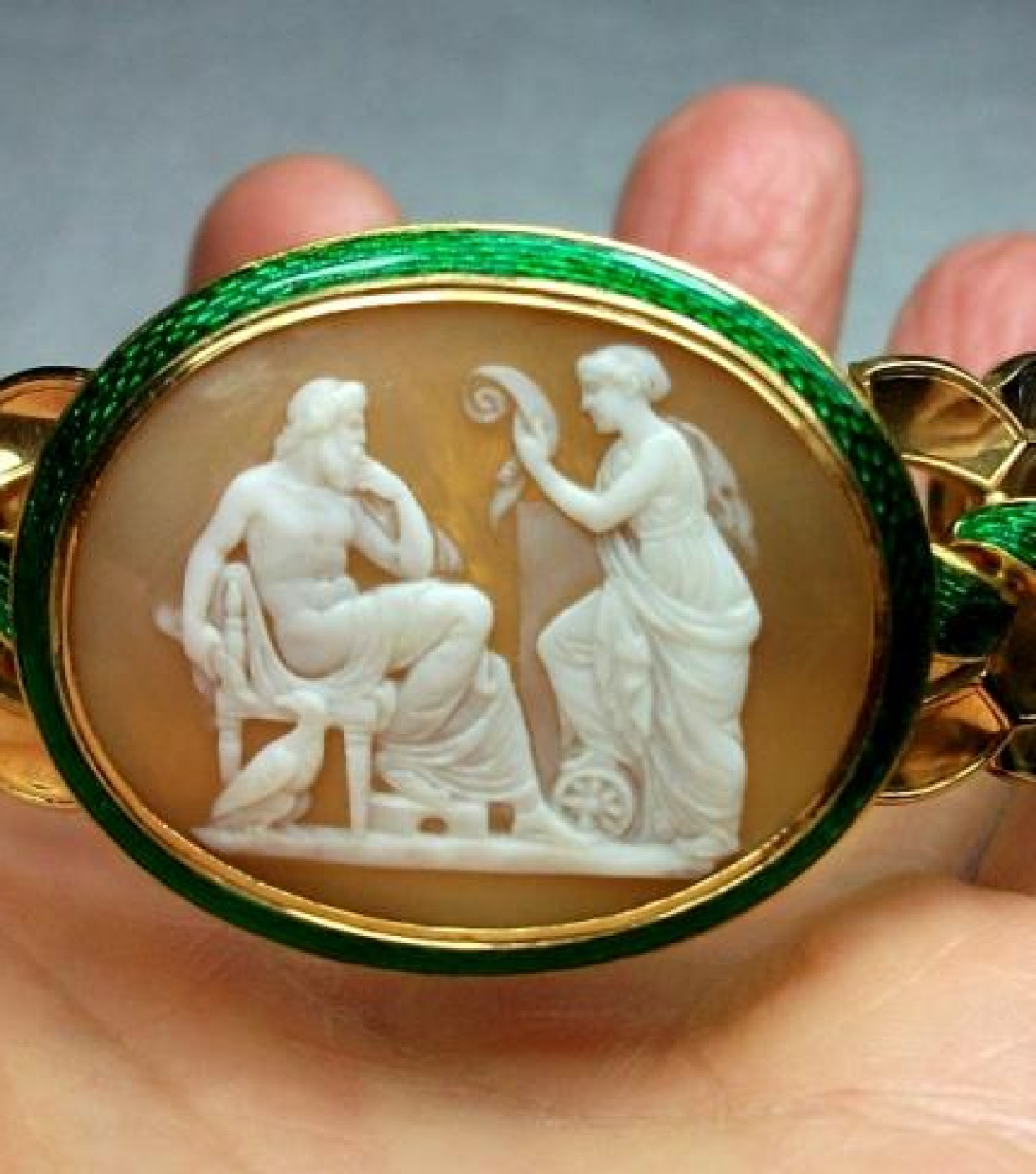 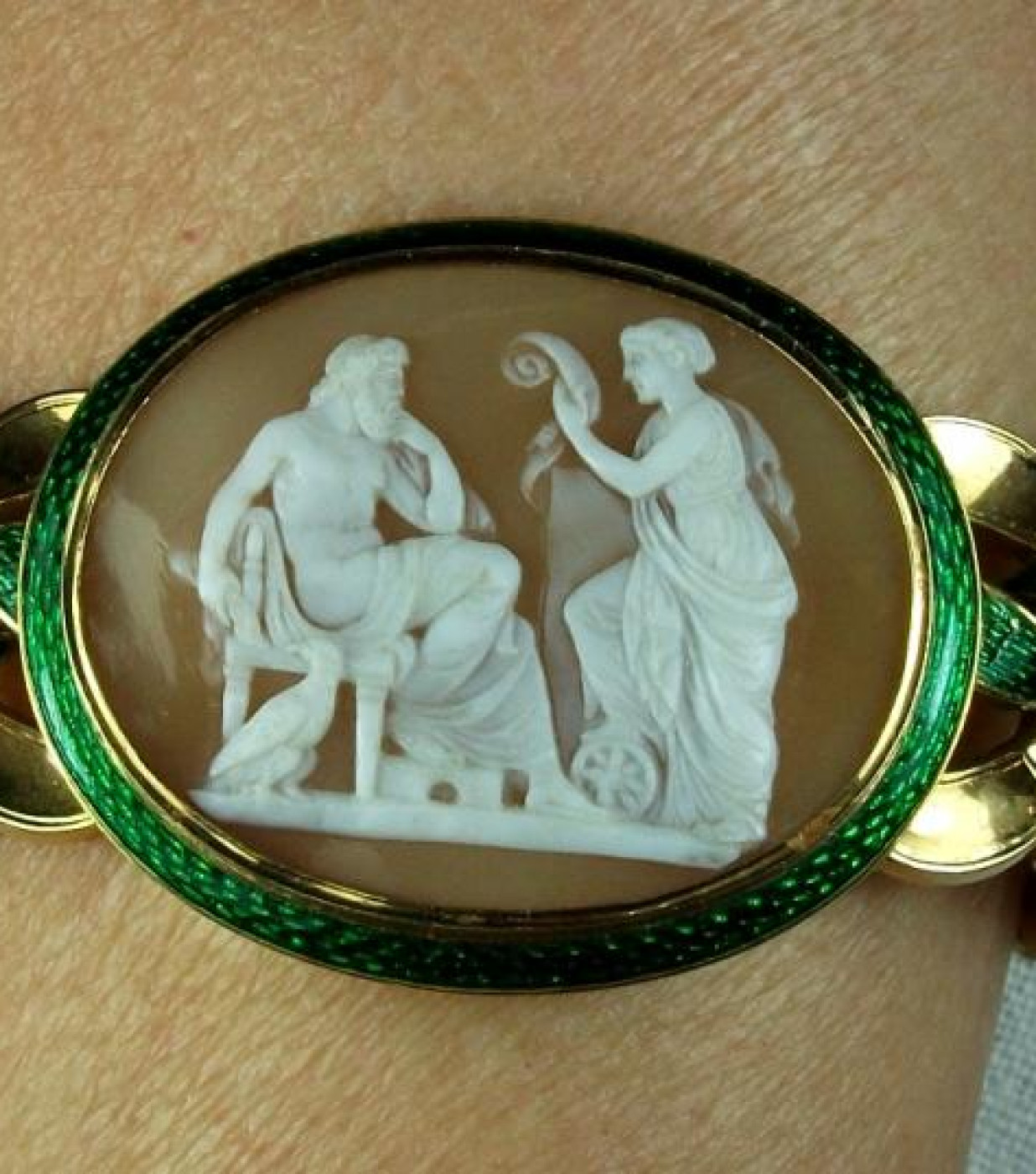 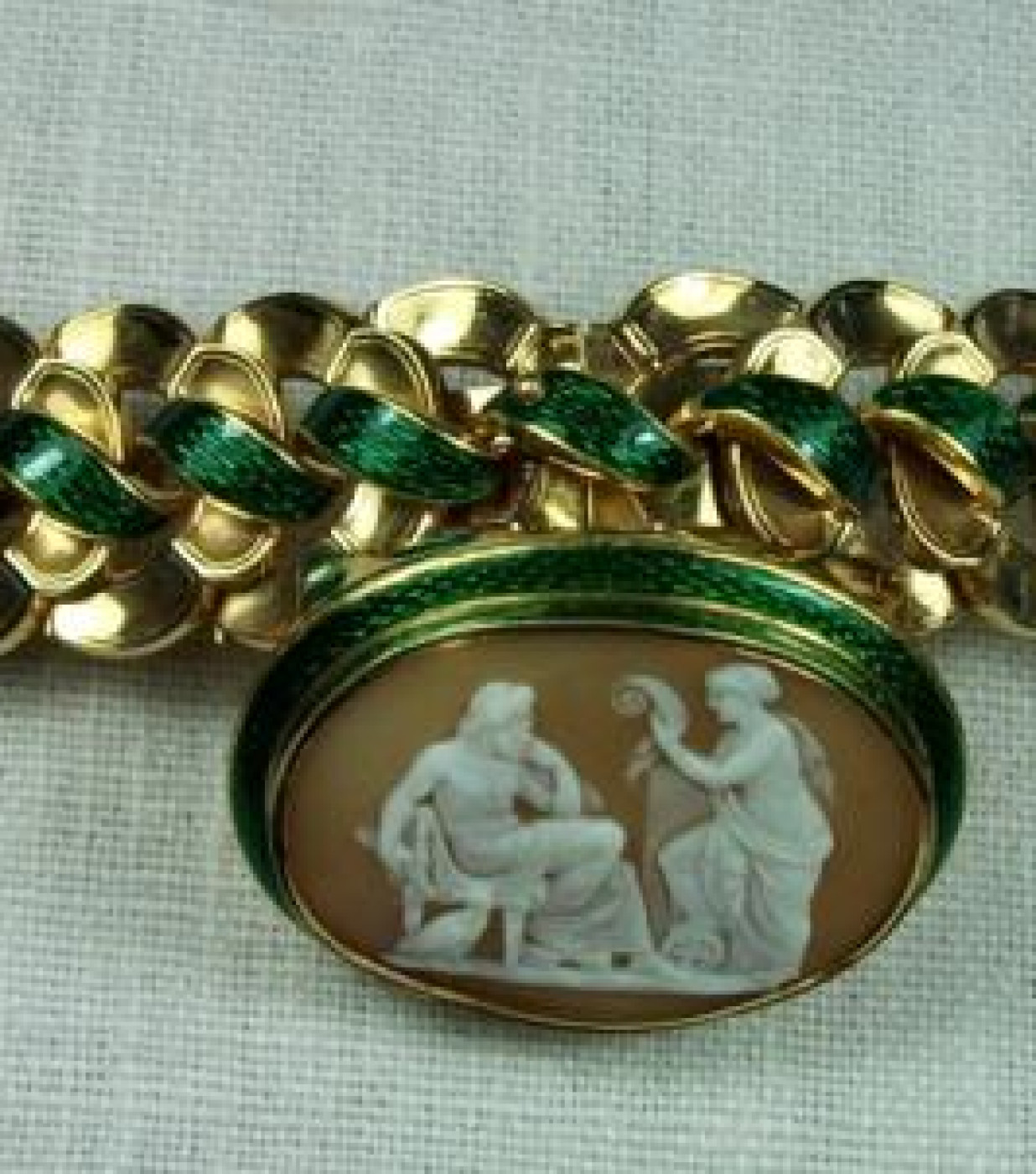 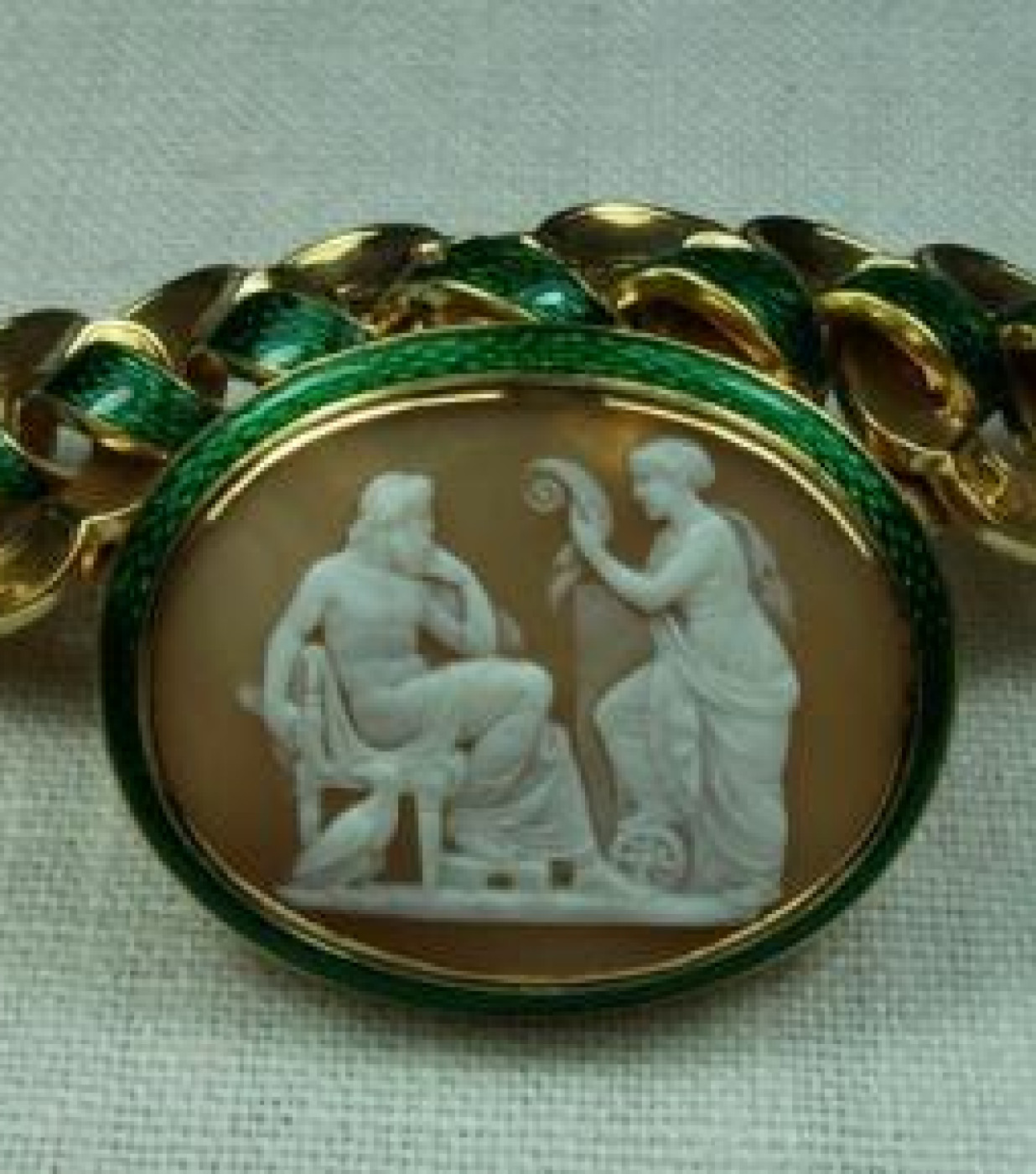 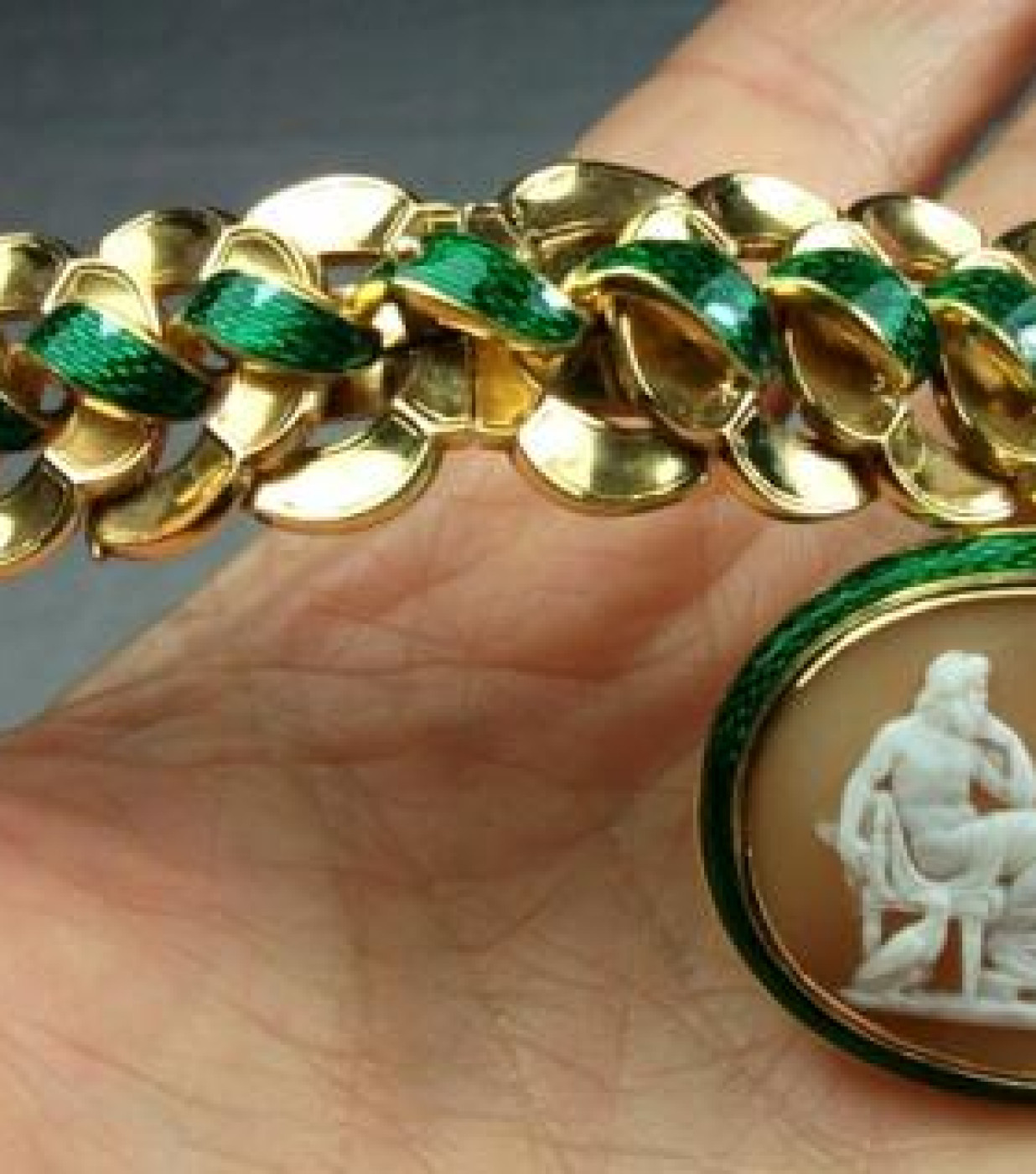 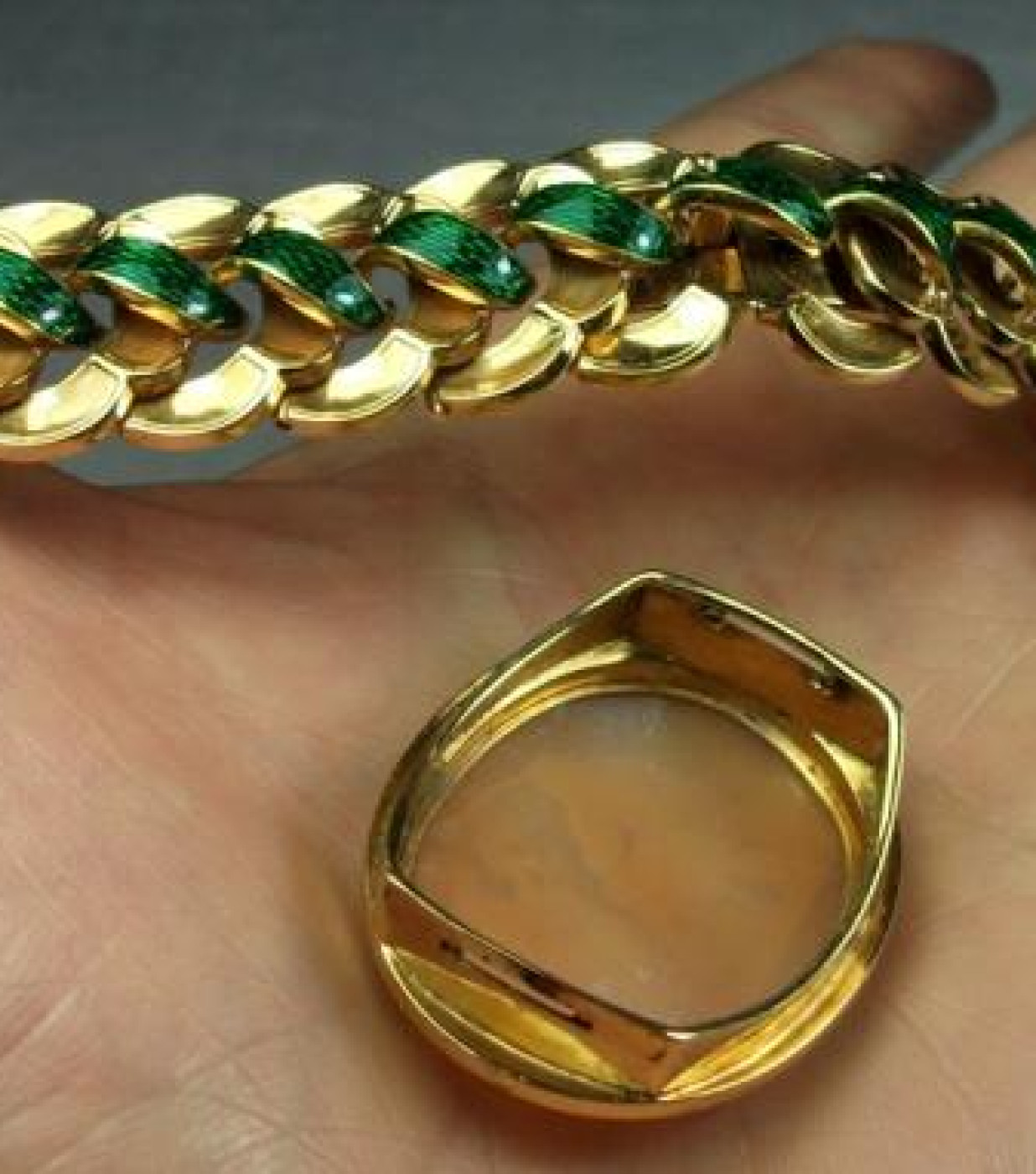 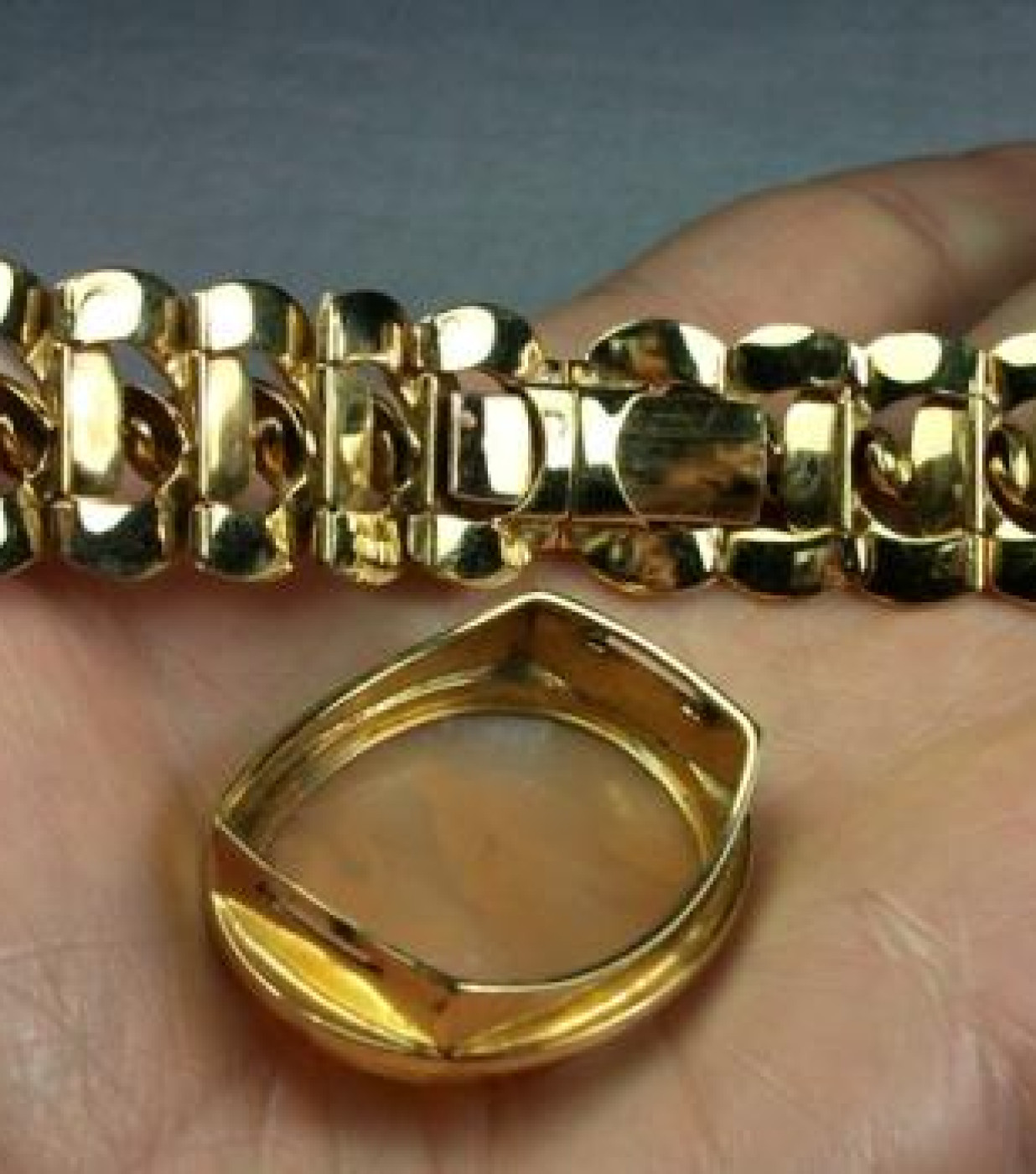 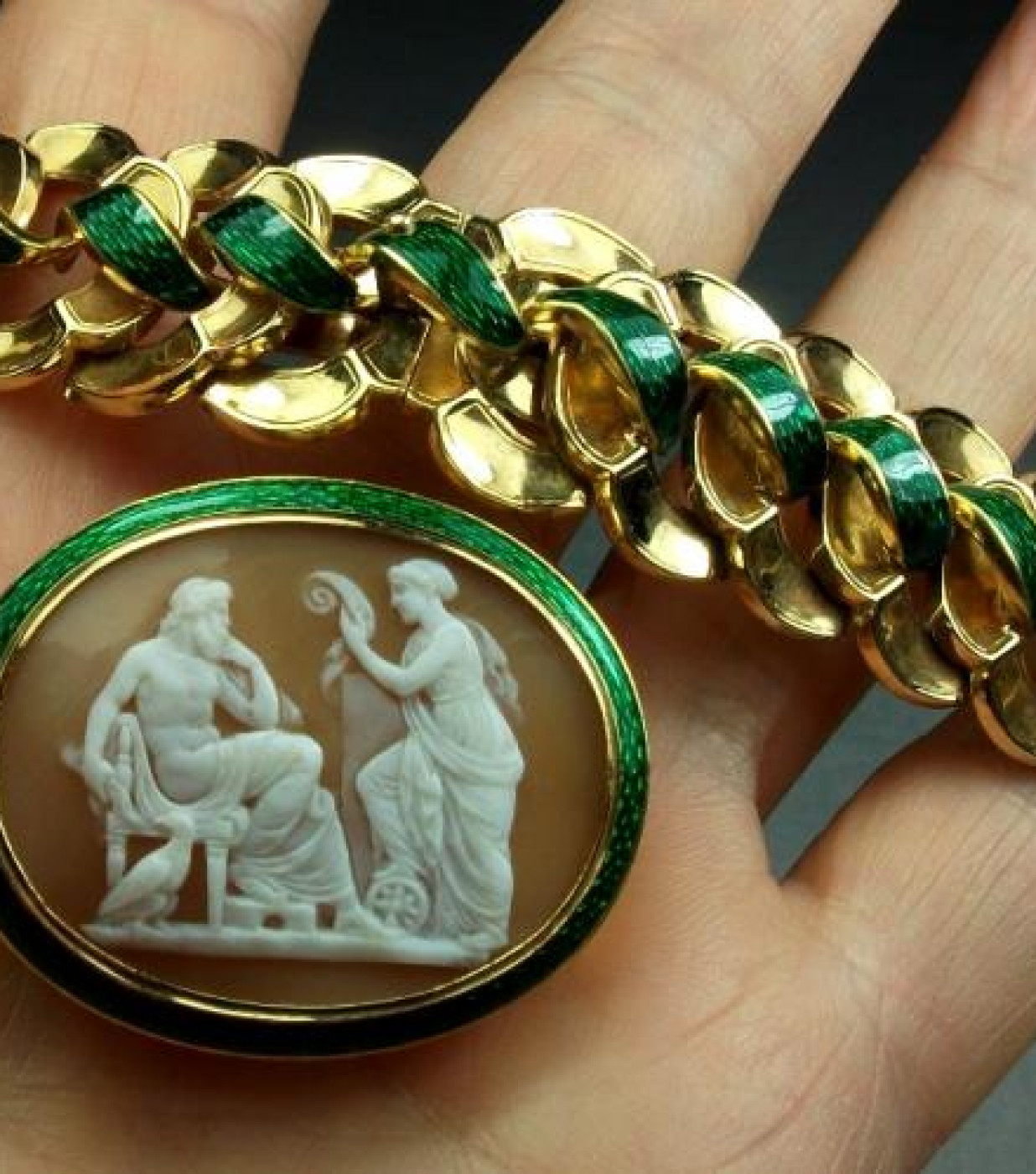 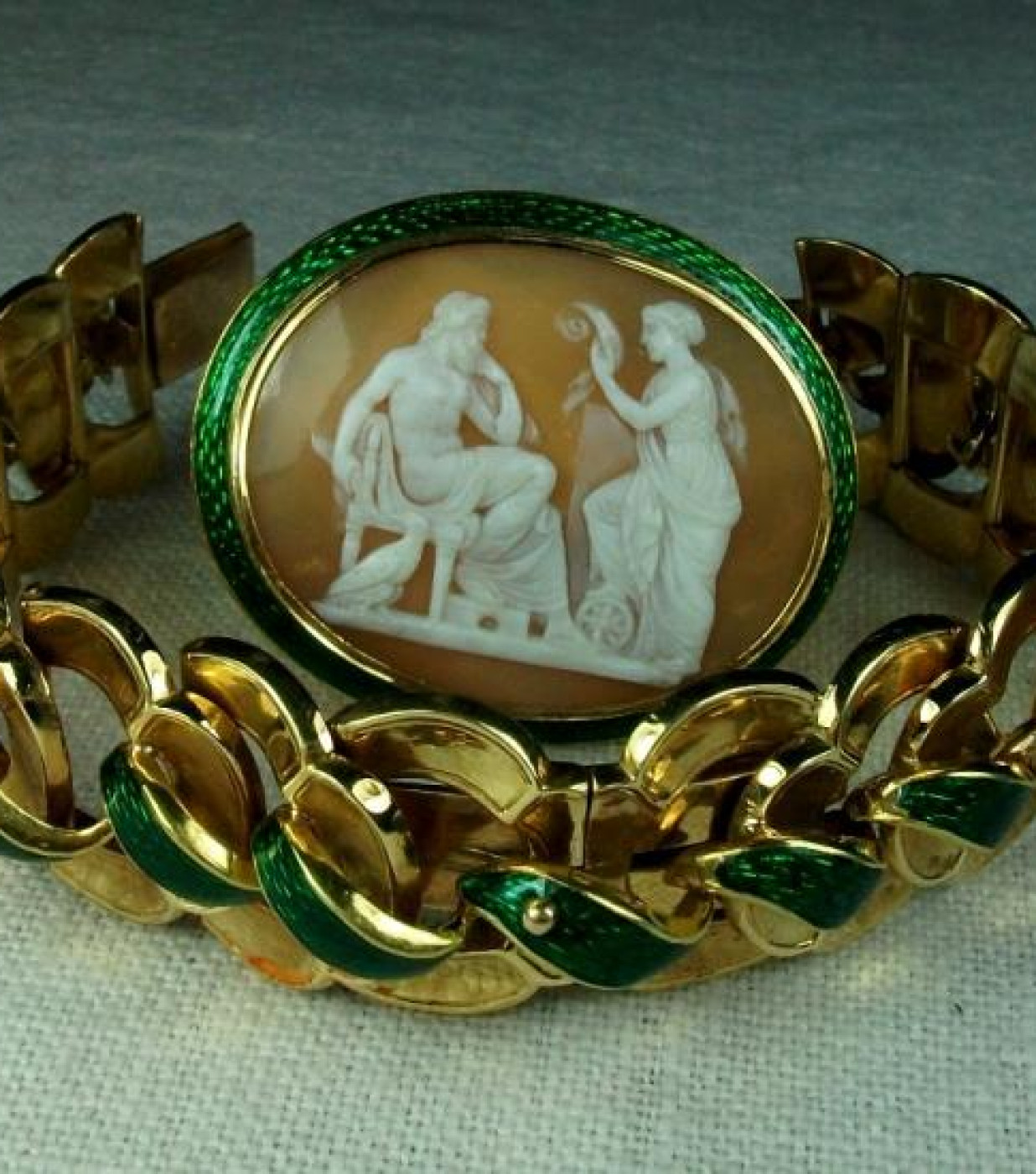 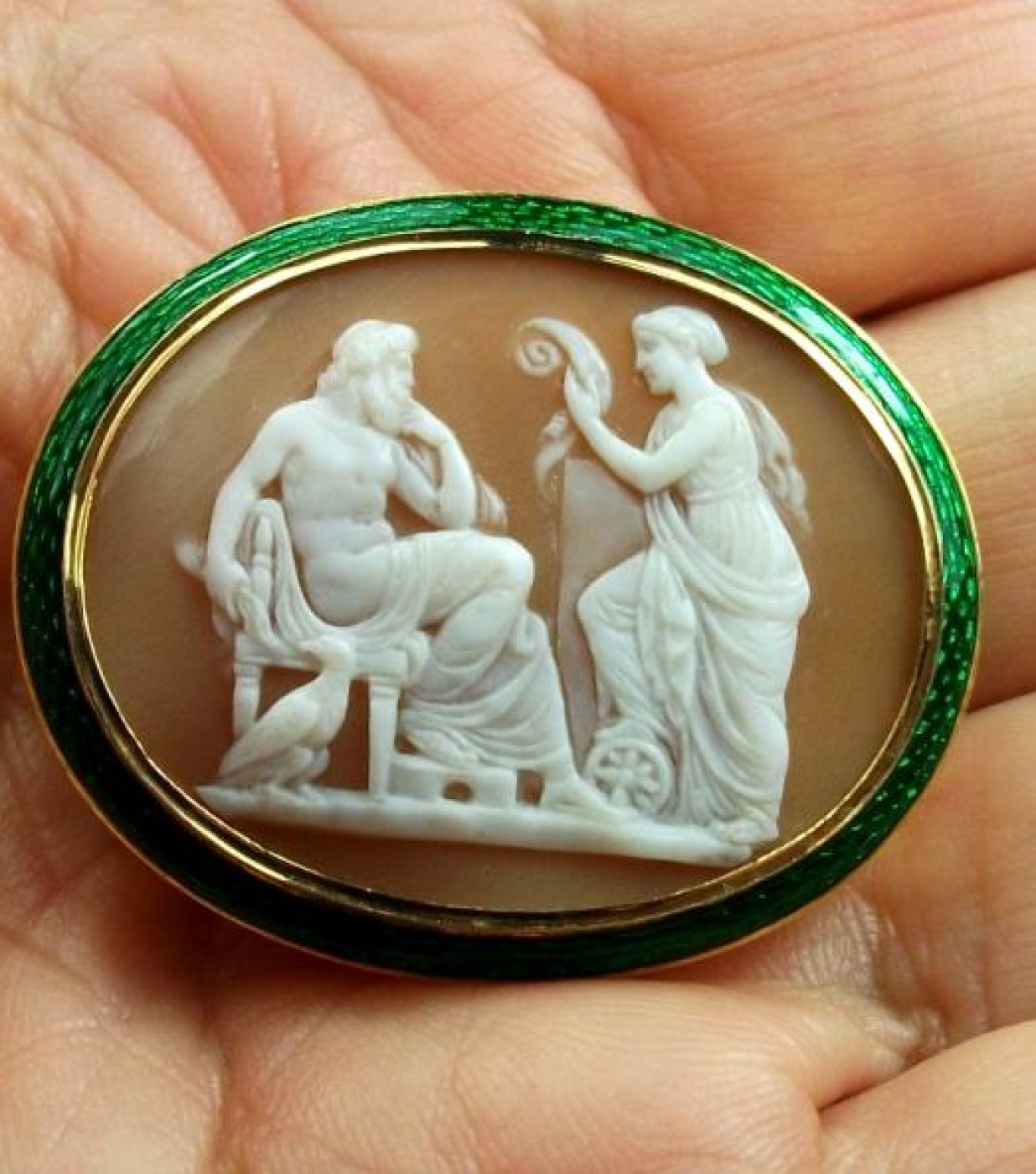 More than Excellent Quality cameo depicting  Zeus and Nemesis. A rarest subject never seen before now. Nemesis is the goddess who punishes mankind’s pride and arrogance. Here, she is seen reading a list of the guilty. One of her feet is resting on the wheel of fortune. The eagle on the left is the symbol of Zeus, the ruler of Olympus. The scene depicted is after a bas-relief by Bertel Thorvaldsen made in 1810 and titled Jupiter and Nemesis, now in the Thorvaldsen Museum in Copenhagen. Zeus was a popular subject on cameos but finding him companied by Nemesis, who is a more than rare subject on cameos, and so wonderfully carved is rarest. Each smallest detail of the sculpture has been carved on the cameo and, even if it is enough small, everything is superbly rendered. The sculpted body of Zeus, his throne, his eagle. Nemesis dress is amazingly made as the paper she's reading to Zeus. Carving a so intricate scene on a small cameo is not easy and carving it so superbly is even harder.  The gold bracelet is gorgeous, massive gold and green enamel, it is spectacular, so elaborate and wonderful. This is another masterly carved cameo. A very desirable collectors piece.


A Bit of History:


In ancient Greek religion, Nemesis, also called Rhamnousia or Rhamnusia ("the goddess of Rhamnous"), is the goddess who enacts retribution against those who succumb to hubris (arrogance before the gods). The name Nemesis is related to the Greek word νÎ­μειν némein, meaning "to give what is due", from Proto-Indo-European nem- "distribute".
Divine retribution is a major theme in the Hellenic world view, providing the unifying theme of the tragedies of Sophocles and many other literary works. Hesiod states: "Also deadly Nyx bore Nemesis an affliction to mortals subject to death" (Theogony, 223, though perhaps an interpolated line). Nemesis appears in a still more concrete form in a fragment of the epic Cypria.
She is implacable justice: that of Zeus in the Olympian scheme of things, although it is clear she existed prior to him, as her images look similar to several other goddesses, such as Cybele, Rhea, Demeter, and Artemis. As the "Goddess of Rhamnous", Nemesis was honored and placated in an archaic sanctuary in the isolated district of Rhamnous, in northeastern Attica. There she was a daughter of Oceanus, the primeval river-ocean that encircles the world. Pausanias noted her iconic statue there. It included a crown of stags and little Nikes and was made by Pheidias after the Battle of Marathon (490 BC), crafted from a block of Parian marble brought by the overconfident Persians, who had intended to make a memorial stele after their expected victory. Her cult may have originated at Smyrna. She is portrayed as a winged goddess wielding a whip or a dagger.
The poet Mesomedes wrote a hymn to Nemesis in the early second century AD, where he addressed her:
Nemesis, winged balancer of life, dark-faced goddess, daughter of Justice
and mentioned her "adamantine bridles" that restrain "the frivolous insolences of mortals".
In early times the representations of Nemesis resembled Aphrodite, who sometimes bears the epithet Nemesis.
Later, as the maiden goddess of proportion and the avenger of crime, she has as attributes a measuring rod (tally stick), a bridle, scales, a sword, and a scourge, and she rides in a chariot drawn by griffins.

The word nemesis originally meant the distributor of fortune, neither good nor bad, simply in due proportion to each according to what was deserte.  Later, Nemesis came to suggest the resentment caused by any disturbance of this right proportion, the sense of justice that could not allow it to pass unpunished. From the fourth century onward, Nemesis, as the just balancer of Fortune's chance, could be associated with Tyche.
Nemesis has been described as the daughter of Oceanus or Zeus, but according to Hyginus she was a child of Erebus and Nyx. She has also been described, by Hesiod, as the daughter of Nyx alone. In the Theogony, Nemesis is the sister of the Moirai (the Fates), the Keres (Black Fates), the Oneiroi (Dreams), Eris (Discord) and Apate (Deception).
In some metaphysical mythology, Nemesis produced the egg from which hatched two sets of twins: Helen of Troy and Clytemnestra, and the Dioscuri, Castor and Pollux. While many myths indicate Zeus and Leda to be the parents of Helen of Troy, the author of the compilation of myth called Bibliotheke notes the possibility of Nemesis being the mother of Helen. Nemesis, to avoid Zeus, turns into a goose, but he turns into a swan and mates with her anyway. Nemesis in her bird form lays an egg that is discovered in the marshes by a shepherd, who passes the egg to Leda. It is in this way that Leda comes to be the mother of Helen of Troy, as she kept the egg in a chest until it hatched.
Nemesis enacted divine retribution on Narcissus for his vanity. After he rejected the advances of the nymph Echo, Nemesis lured him to a pool where he caught sight of his own reflection and fell in love with it, eventually dying.
A festival called Nemeseia (by some identified with the Genesia) was held at Athens. Its object was to avert the nemesis of the dead, who were supposed to have the power of punishing the living, if their cult had been in any way neglected (Sophocles, Electra, 792; E. Rohde, Psyche, 1907, i. 236, note I).
Nemesis was one of several tutelary deities of the drill-ground (as Nemesis campestris). Modern scholarship offers little support for the once-prevalent notion that arena personnel such as gladiators, venatores and bestiarii were personally or professionally dedicated to her cult. Rather, she seems to have represented a kind of "Imperial Fortuna" who dispensed Imperial retribution on the one hand, and Imperially subsidized gifts on the other; both were functions of the popular gladiatorial Ludi held in Roman arenas. She is shown on a few examples of Imperial coinage as Nemesis-Pax, mainly under Claudius and Hadrian. In the third century AD, there is evidence of the belief in an all-powerful Nemesis-Fortuna. She was worshipped by a society called Hadrian's freedmen.
Ammianus Marcellinus includes her in a digression on Justice following his description of the death of Gallus Caesar.

Zeus  in Greek mythology is the king of the gods, the ruler of Mount Olympus, and the god of the sky and thunder. His symbols are the thunderbolt, eagle, bull and the oak. Zeus was the child of Cronus and Rhea, and the youngest of his siblings. In most traditions he was married to Hera, although at the oracle of Dodona his consort was Dione: according to the Iliad, he is the father of Aphrodite by Dione. He is known for his erotic escapades, including one pederastic relationship with Ganymede. These resulted in many famous offspring, including Athena, Apollo and Artemis, Hermes, Persephone (by Demeter), Dionysus, Perseus, Heracles, Helen, Minos, and the Muses (by Mnemosyne); by Hera he is usually said to have fathered Ares, Hebe and Hephaestus.His Roman counterpart was Jupiter.