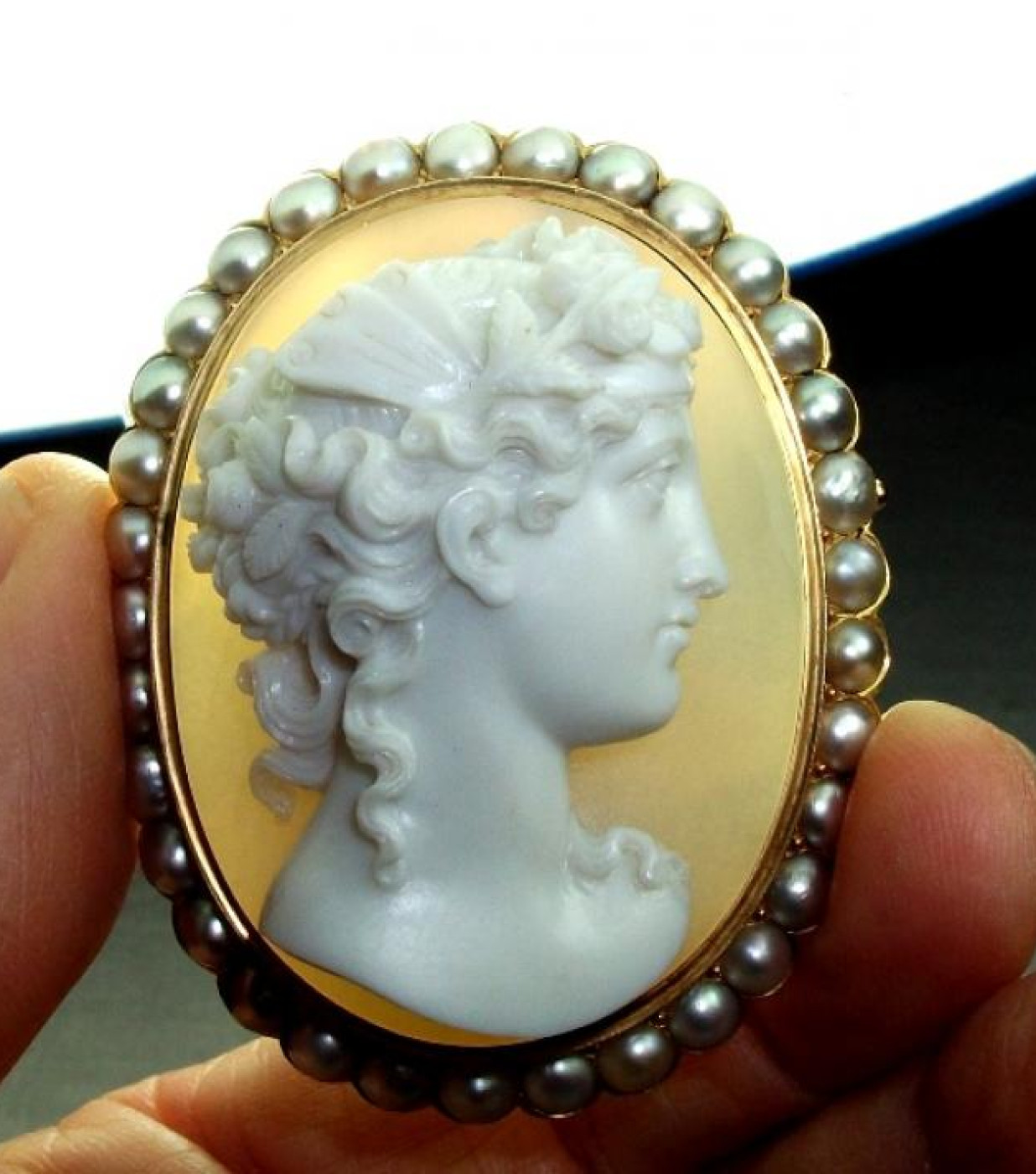 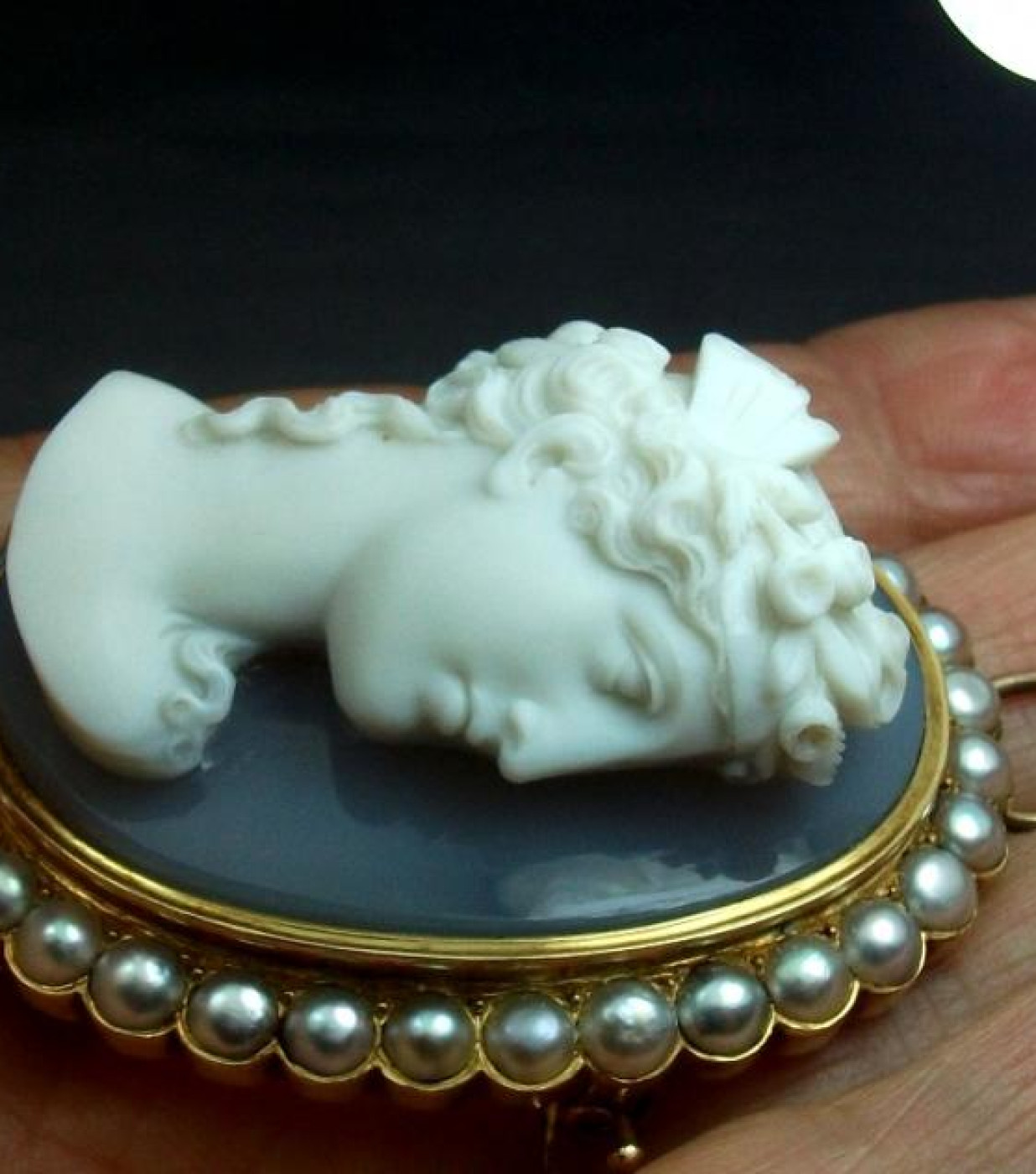 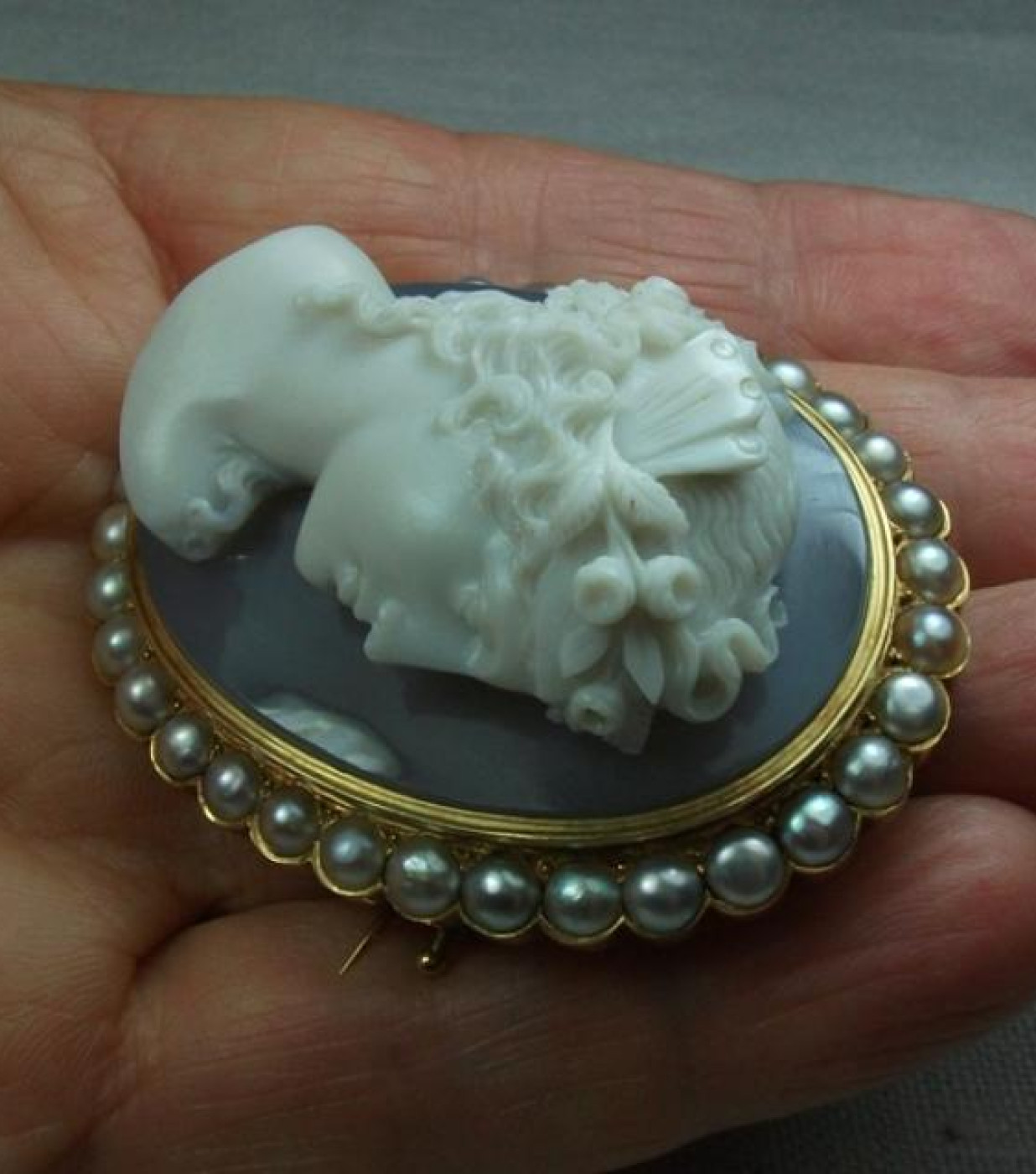 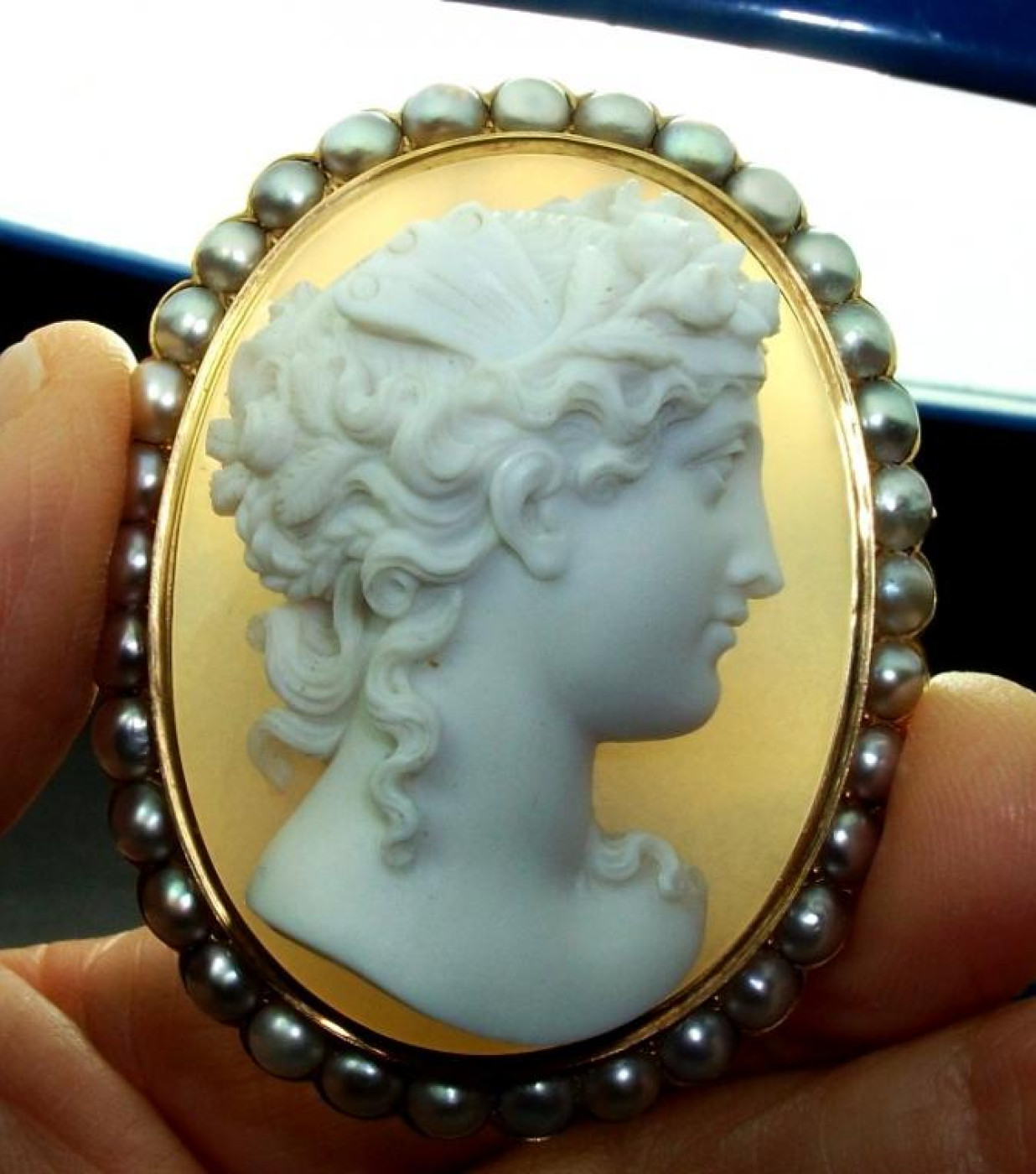 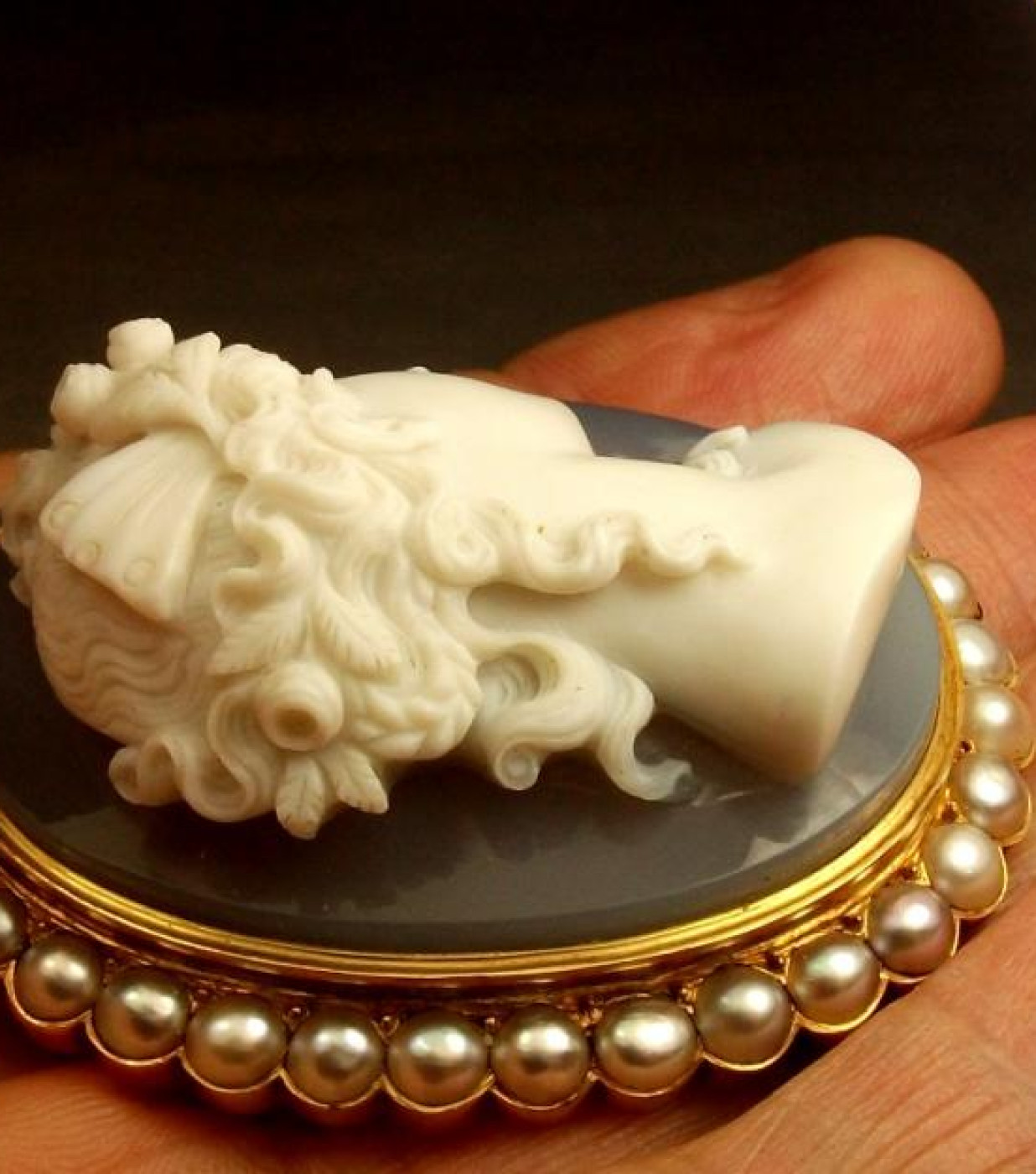 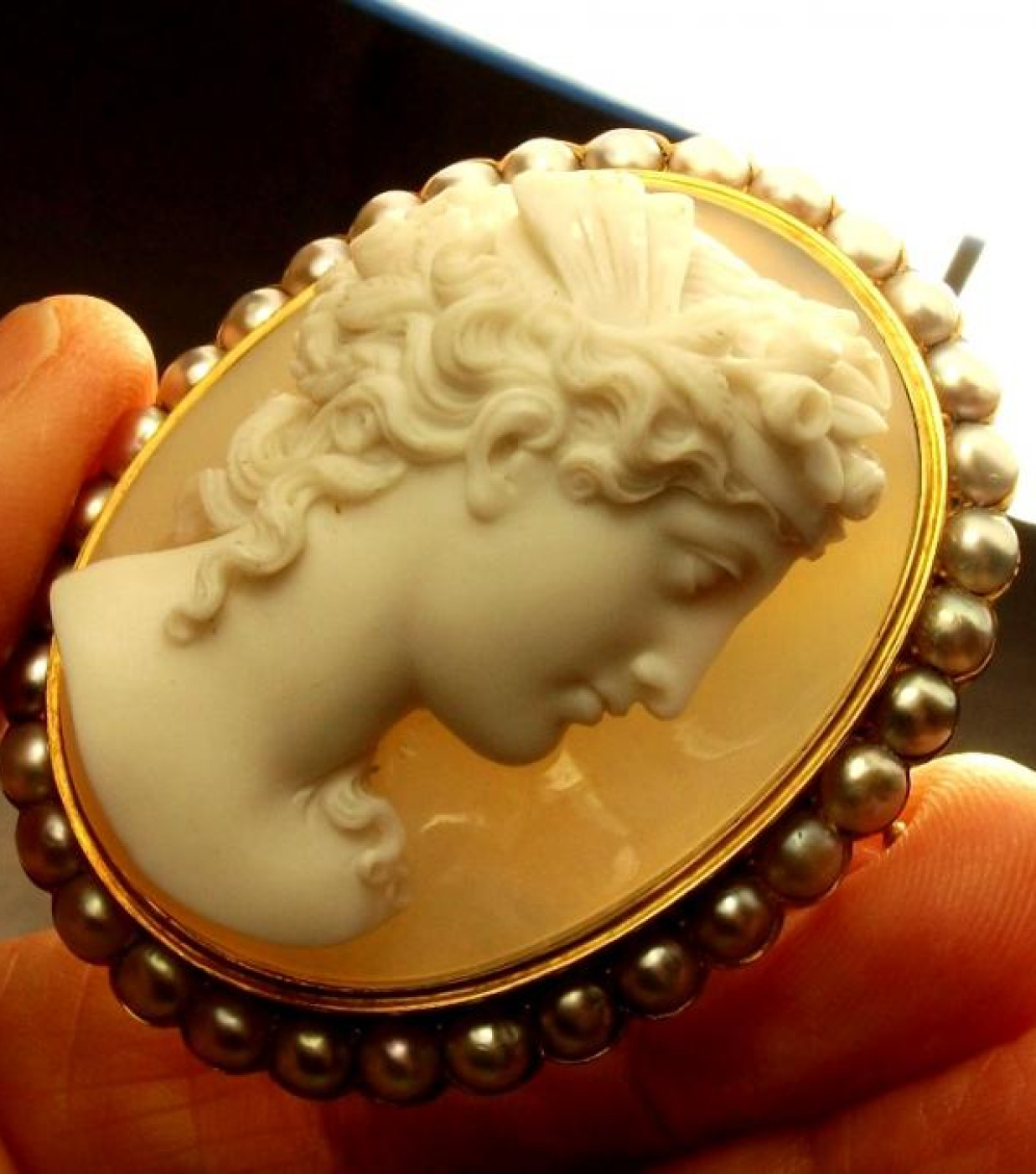 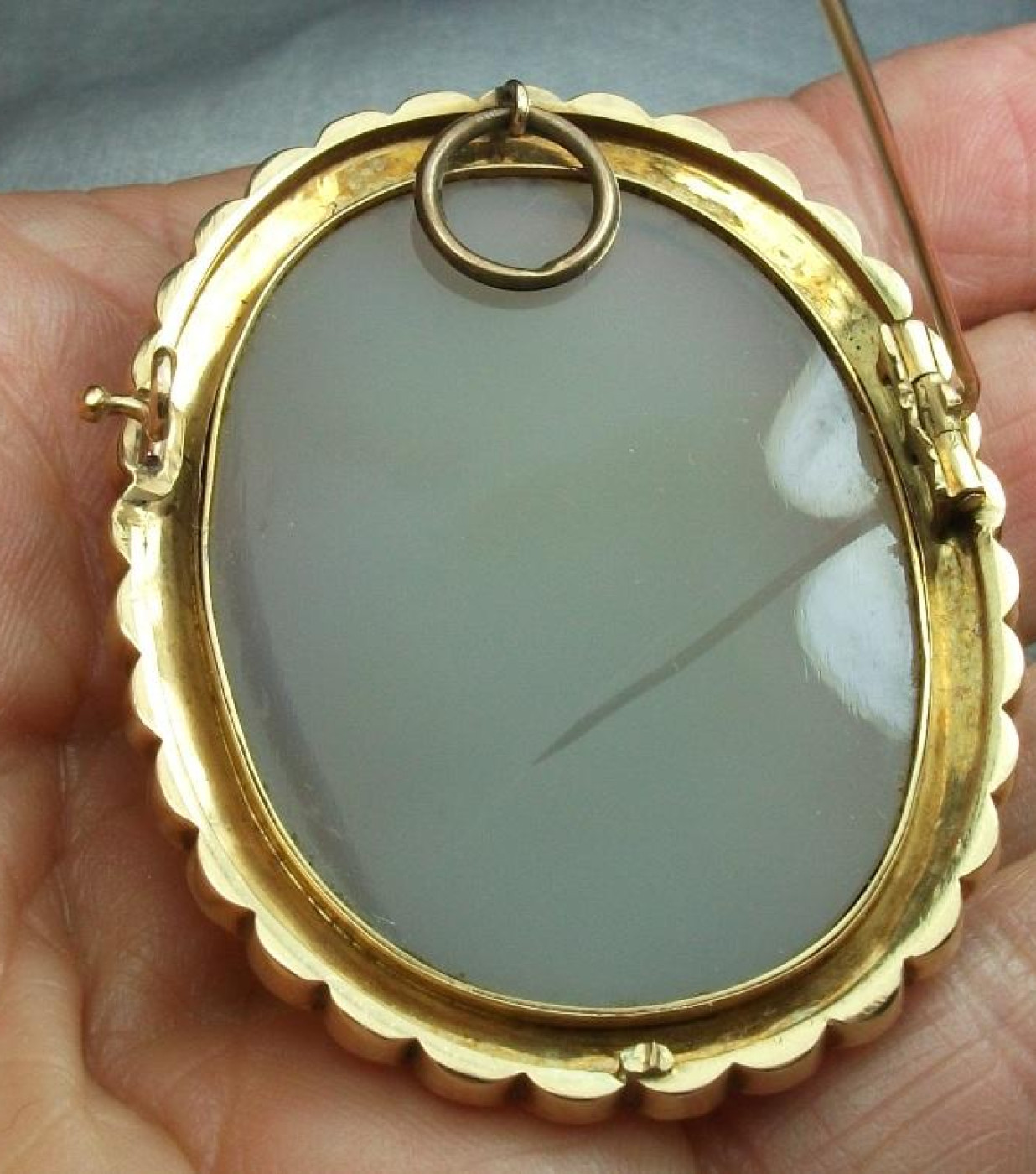 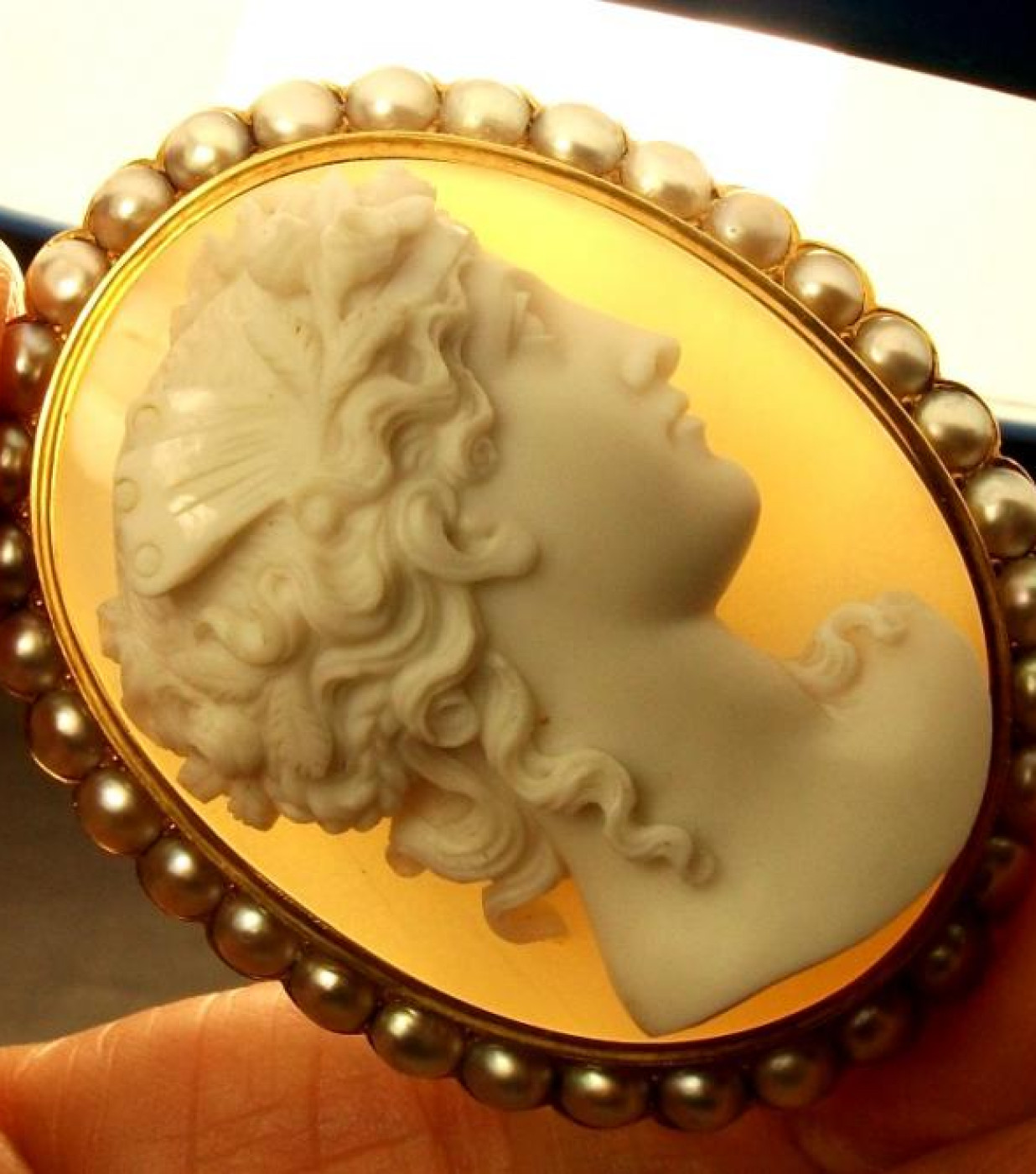 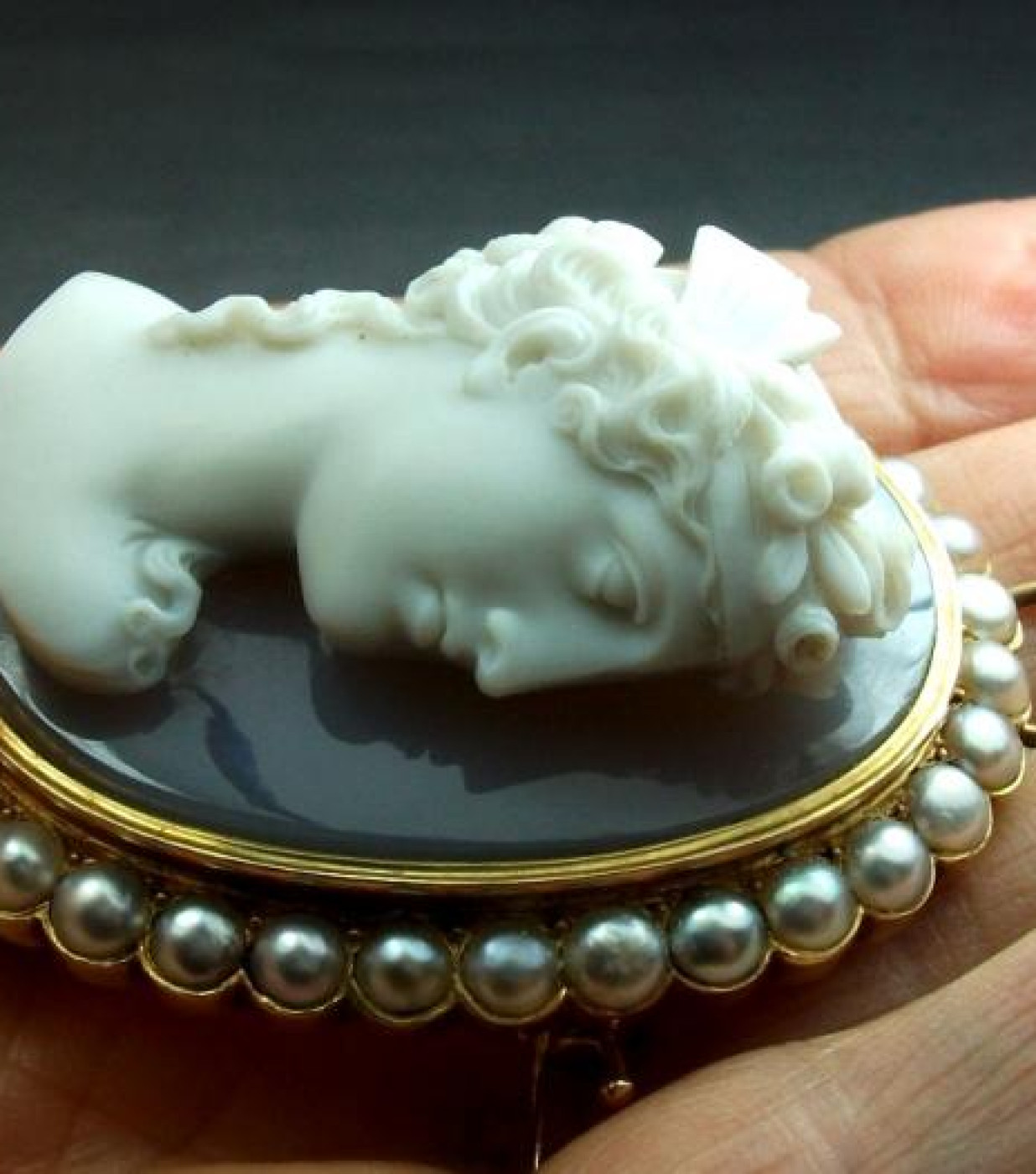 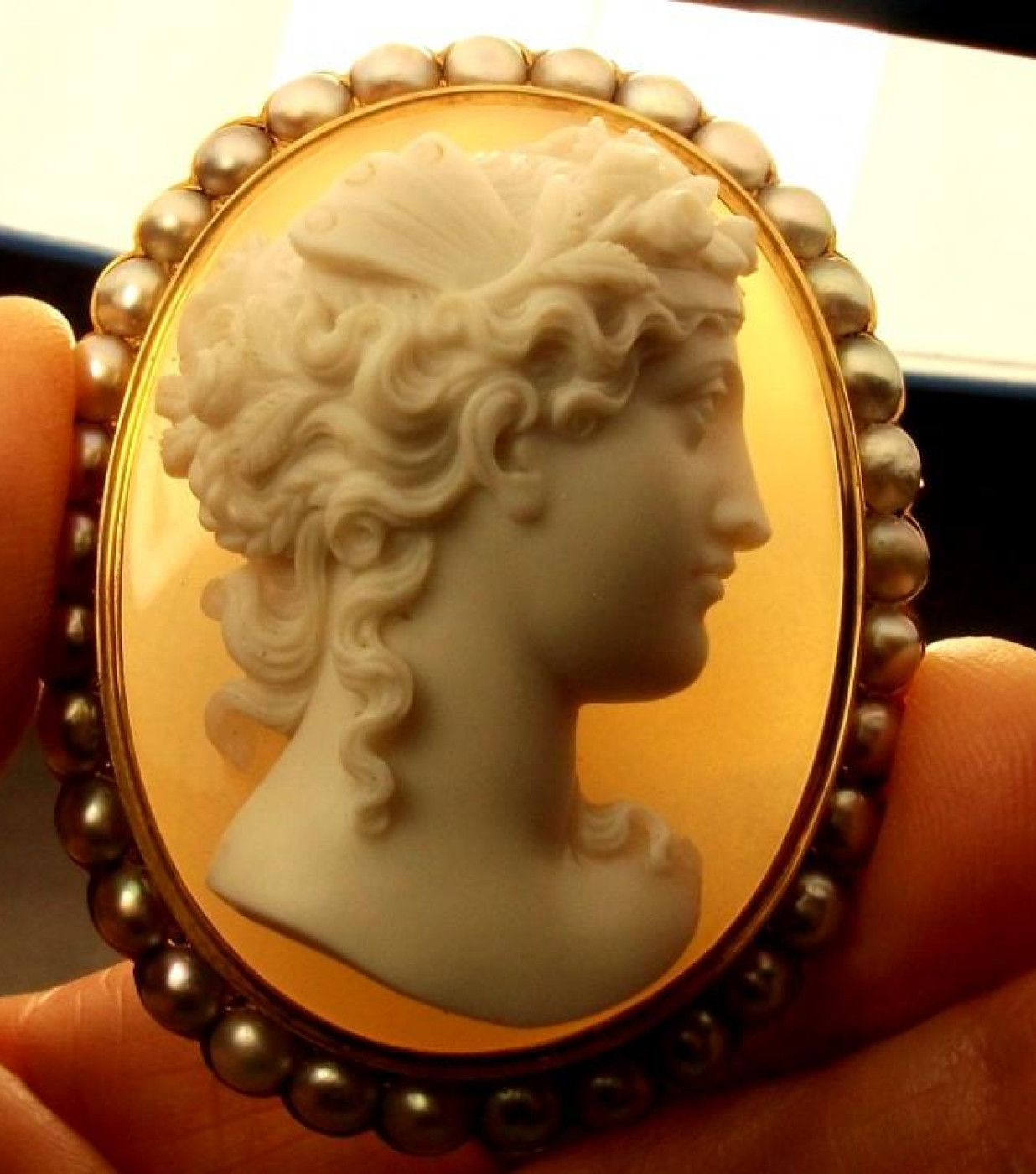 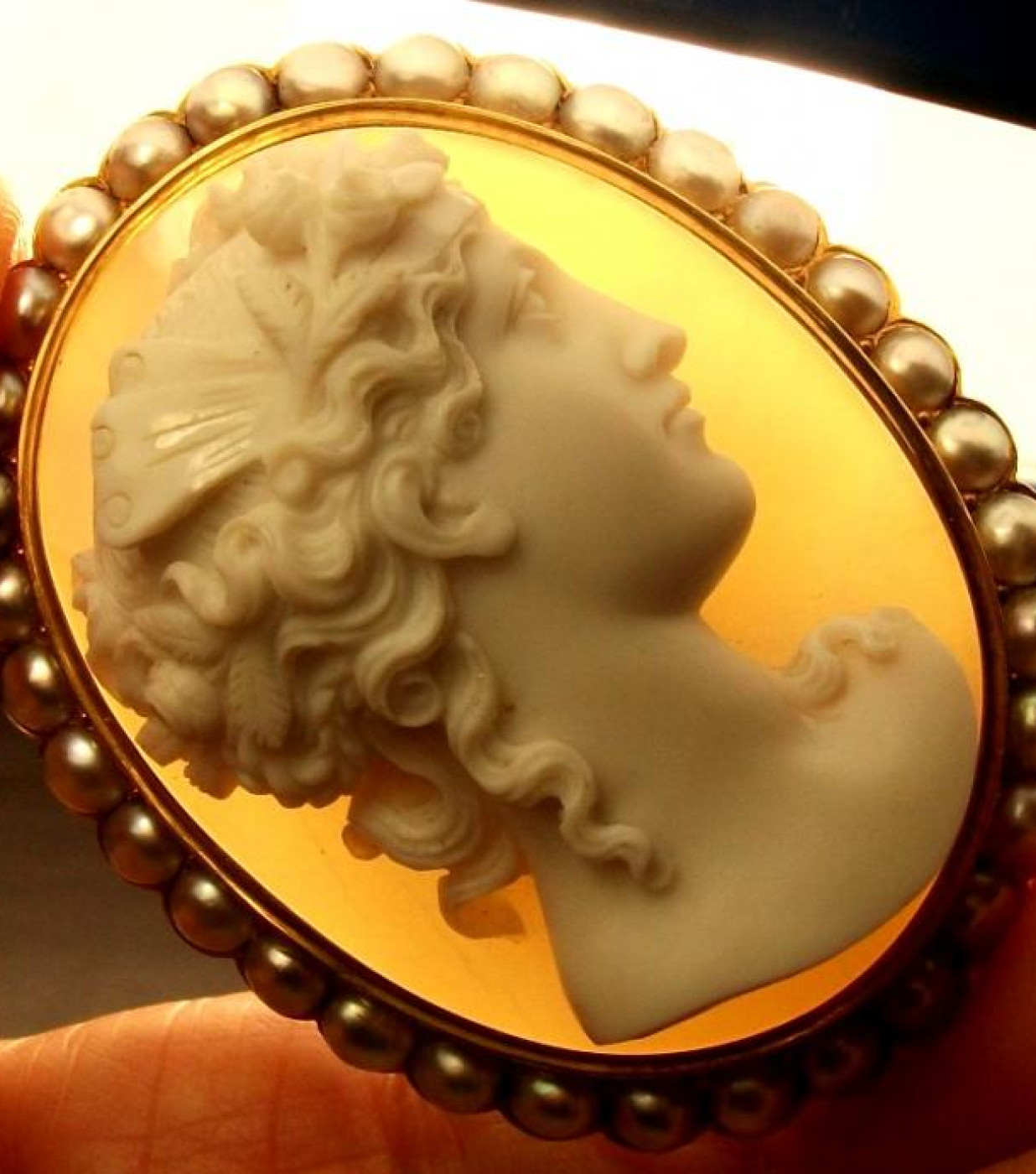 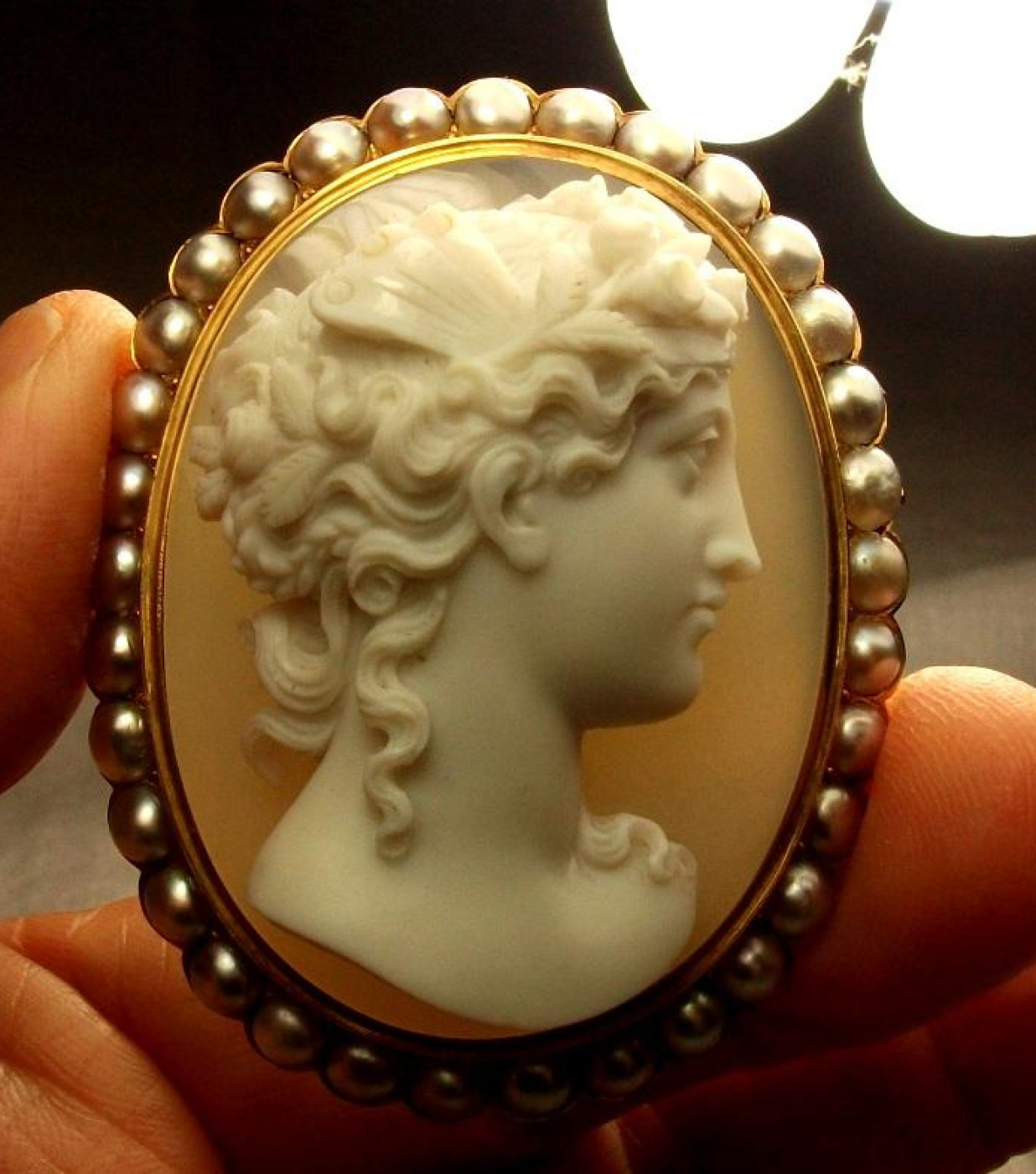 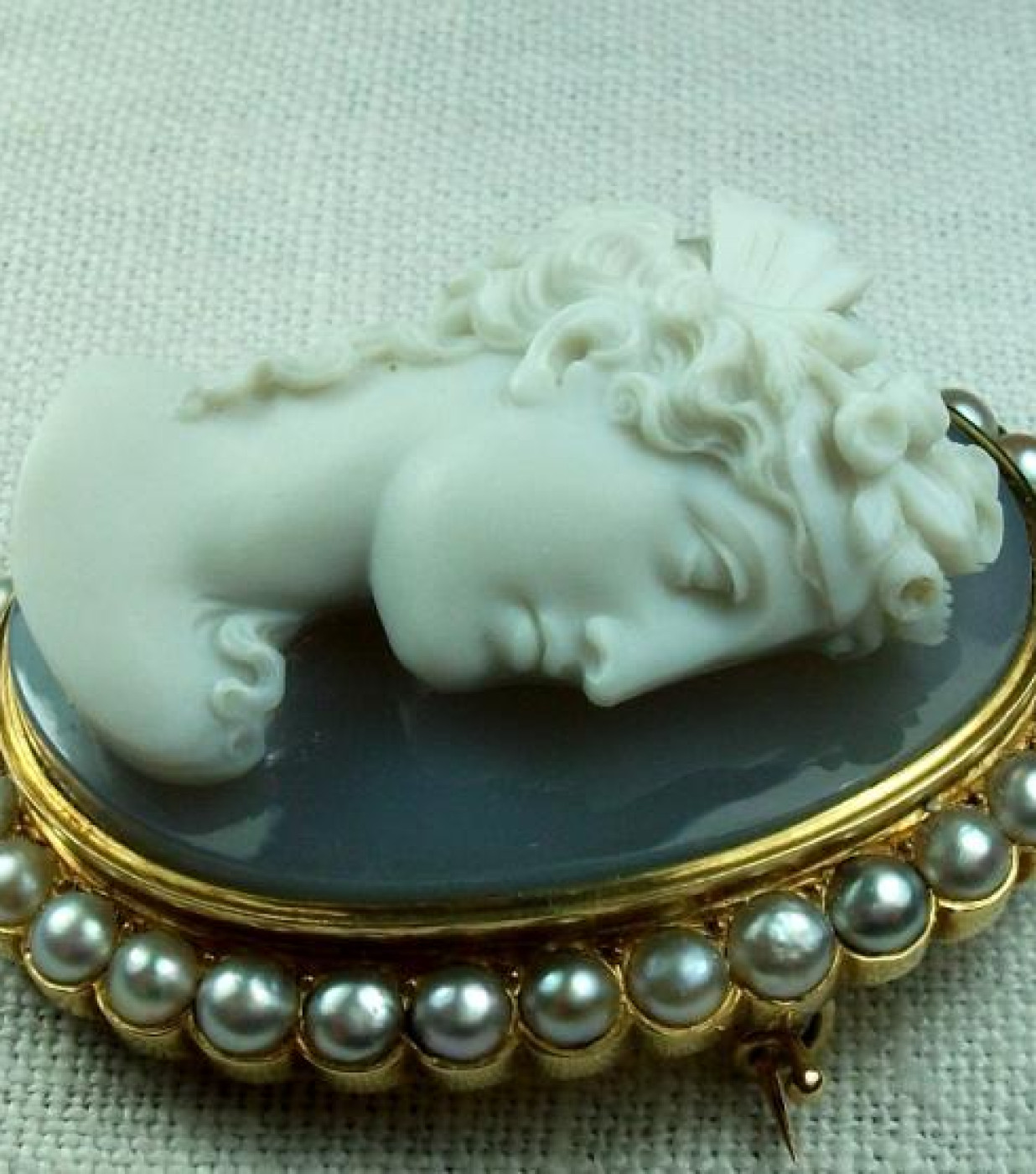 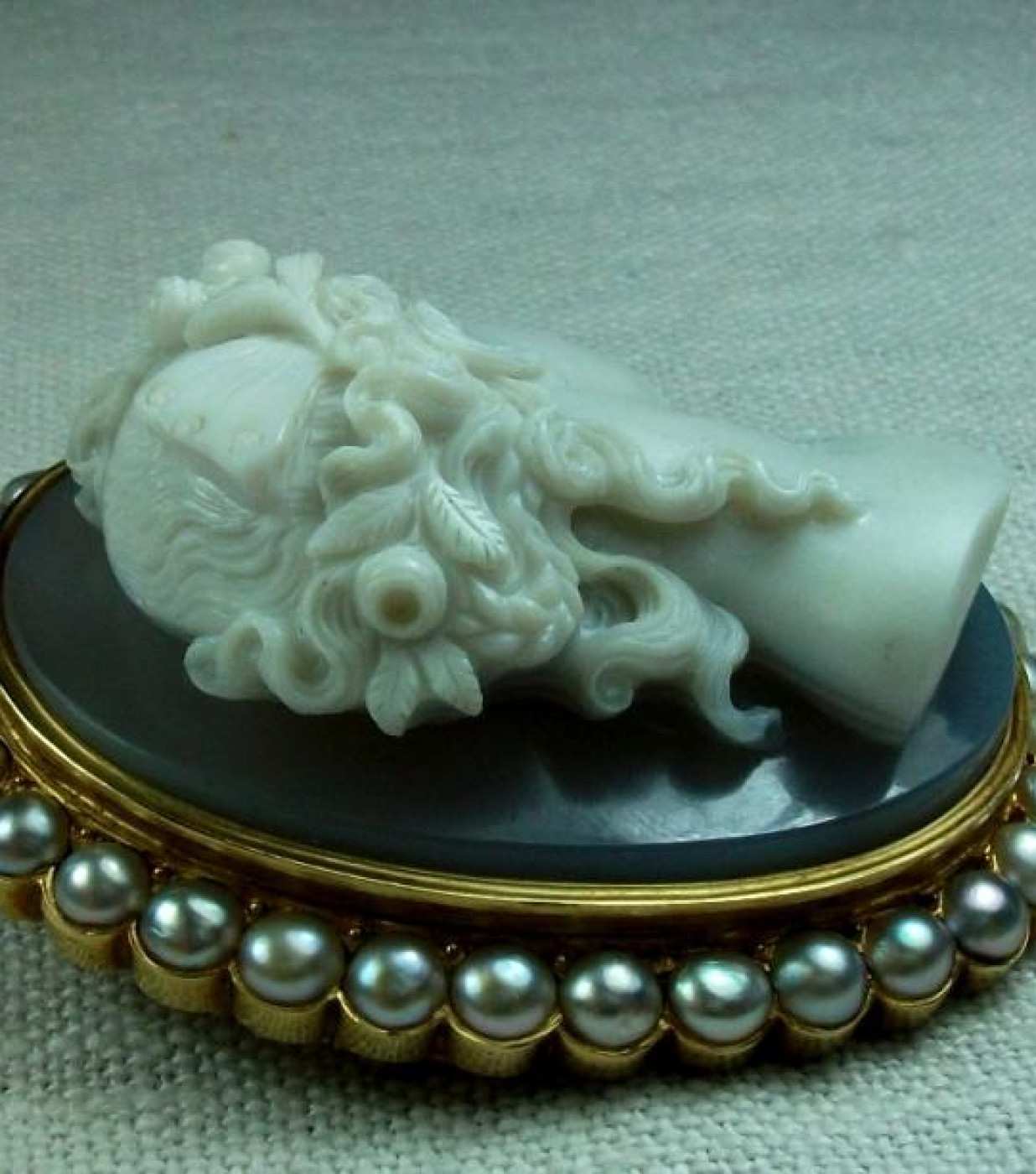 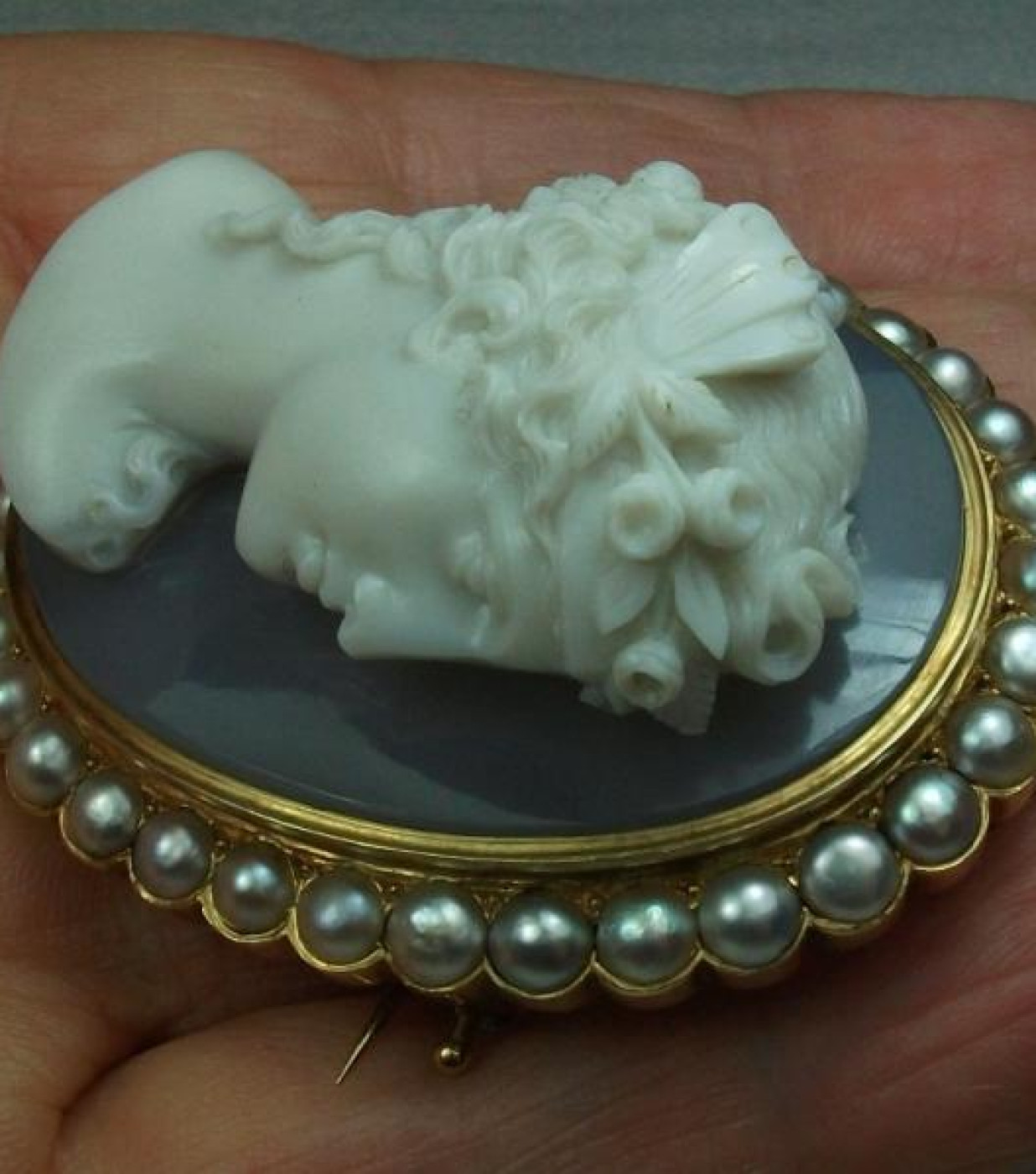 Museum Quality cameo depicting Psyche, it is unusual seeing the wife of Eros depicted alone because most of times she's depicting companied by Eros. This cameo is amazingly carved, you can even see her eye pupil. Her main symbols, the butterfly wings, are shown. This one is a true rare collector piece.
This one is a three-dimensional cameo, look at how the carving is relieved and what a carving! It stands more than 3/8" proudly from the grey background. It is so crisp and perfect, and the contrast against the pearl grey background is magnificent. Her face is so pretty and sweet, you must look well at the pictures, you'll see a real sweet expression in her eyes. She's a mixture of innocence and sensuality at the same time.  Her curly and braided hair is so wonderfully and so finely carved to appear real. She wears a crown of flowers and this is an unusual detail. Flowers too are magnificently carved. The frame is enhanced by pale grey half pearls which recall the colour of the background and is massive gold, it is simply wonderful.  A surpassing beauty cameo, everything in this cameo is amazingly carved, this cameo is just like a sculpture. All the details are just perfect.  This is another masterly carved cameo. A very desirable collectors piece, rare and museum quality cameo.

In Greek mythology, Psyche was the deification of the human soul. She was portrayed in ancient mosaics as a goddess with butterfly wings. The Greek word psyche literally means "spirit, breath, life or animating force". Psyche was originally the youngest daughter of the king and queen of Sicily, and the most beautiful person on the island. Suitors flocked to ask for her hand. She eventually boasted that she was more beautiful than Aphrodite (Venus) herself, and Aphrodite sent Eros to transfix her with an arrow of desire, to make her fall in love with the nearest person or thing available. But even Eros (Cupid) fell in love with her, and took her to a secret place, eventually marrying her and having her made a goddess by Zeus (Jupiter). Young girl of extraordinary beauty, Psyche instigates the terrible jealousy of Venus, which orders to Eros to arouse in her the passion for a man of vile condition. The God however falls in love with Psyche and conduct her in a fabulous palace where every night he goes to visit her under false semblances. Eros asks to the young one not to try to know his identity under punishment of the abandonment. One night, nevertheless, Psyche, instigated by her malignant and envious sisters and armed with a knife, draws near to the god making light with a lamp. This way, a drops of oil strains from the oil lamp falling on the shoulder of Eros, which arouses him and, disappointed, he abandons the young girl . In the desperate search of the lost love Psyche reaches the palace of Venus. The Goddess, moved by the anger, submits the young girl to a series of tests, that Psyche succeeds in overcoming thanks to the help of some Gods. Eros meanwhile, suffering of nostalgia, goes to search for the beloved one and found her, he asks the permission to marry her to Jupiter. The king of the Gods orders therefore to Mercury to go to take Psyche and to conduct her on the Olympus among the immortal ones. The history of Eros and Psyche fascinated particularly the Renaissance artists that represented her in all of her episodes in the decorations of noble palaces