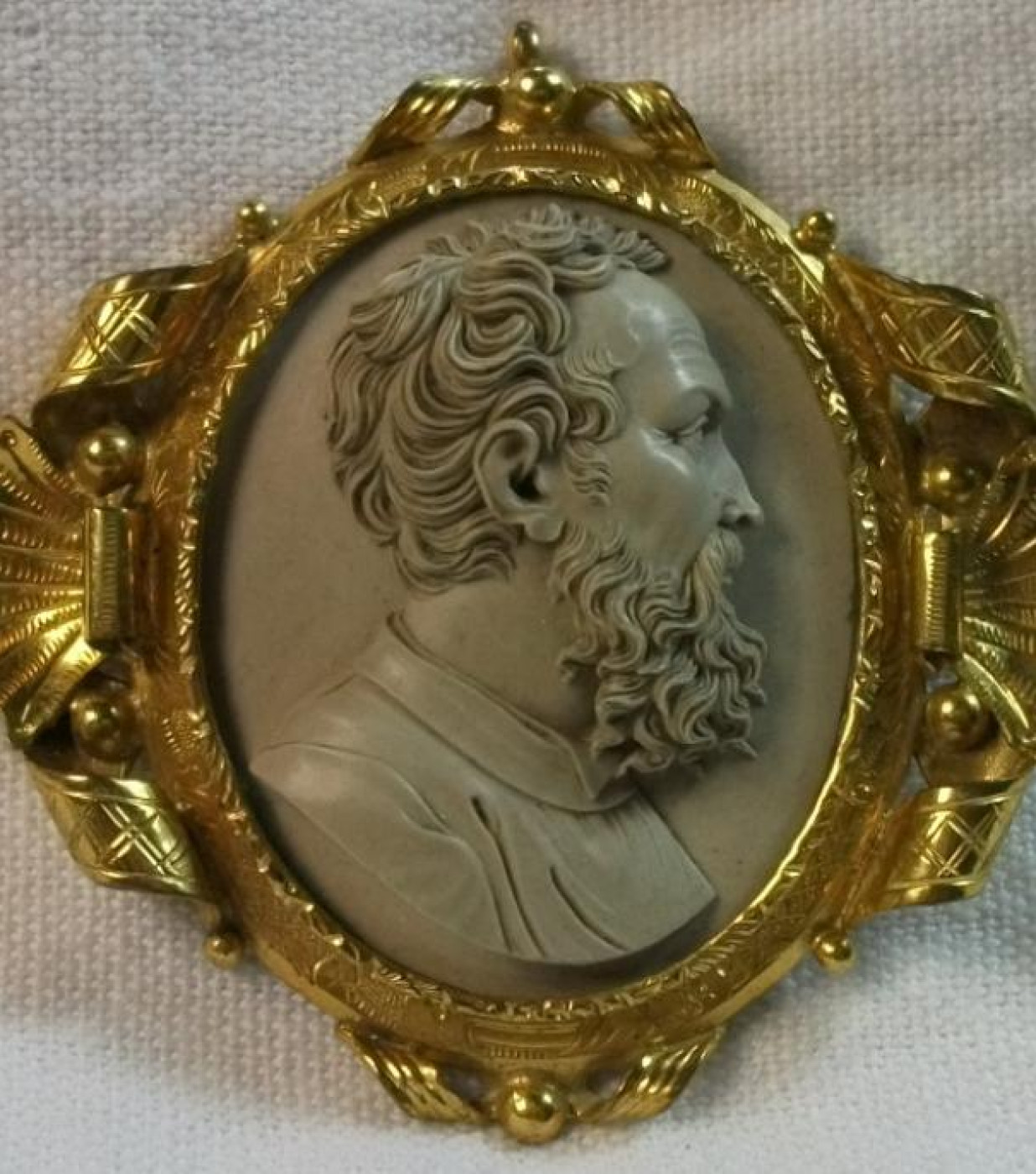 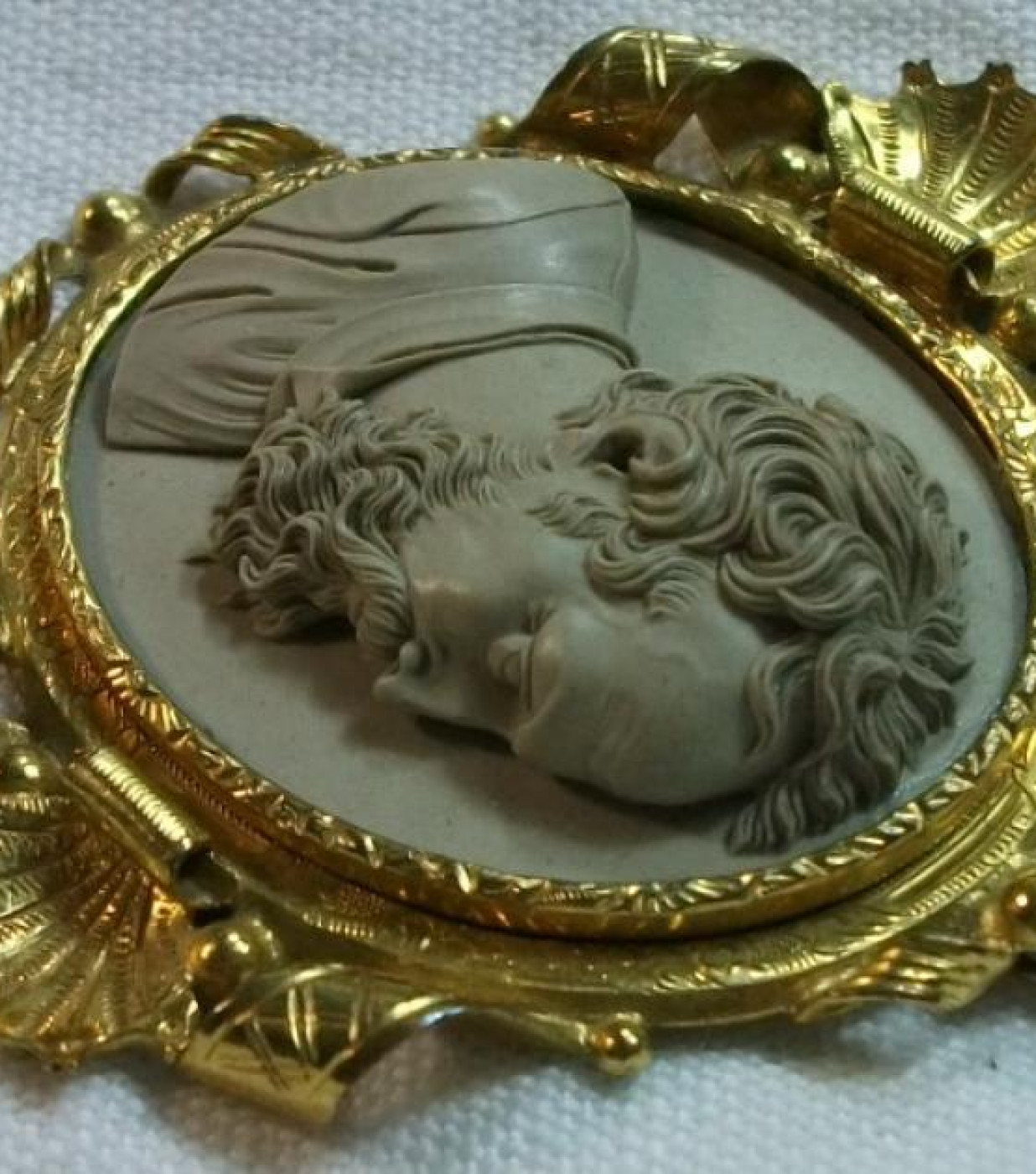 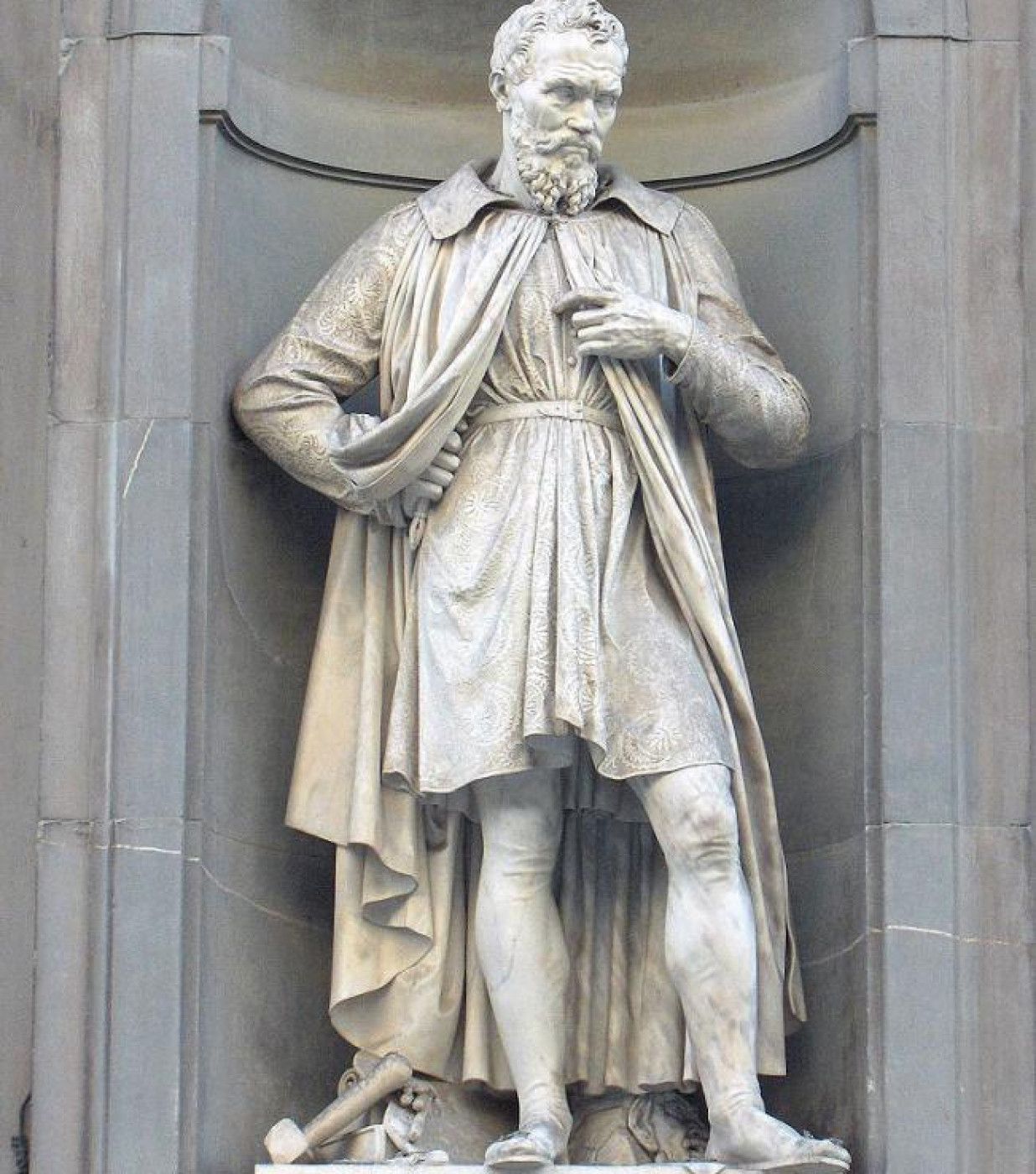 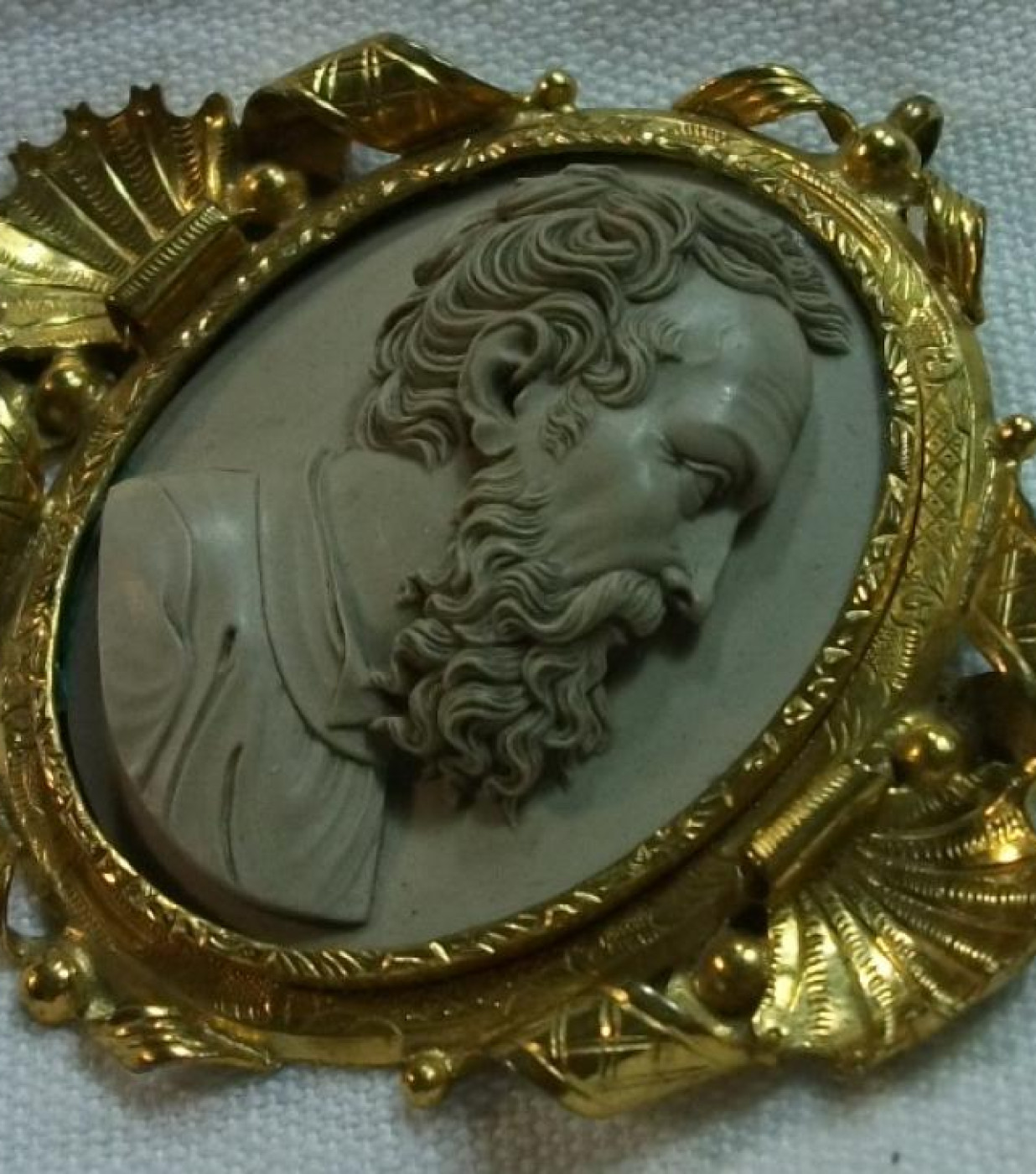 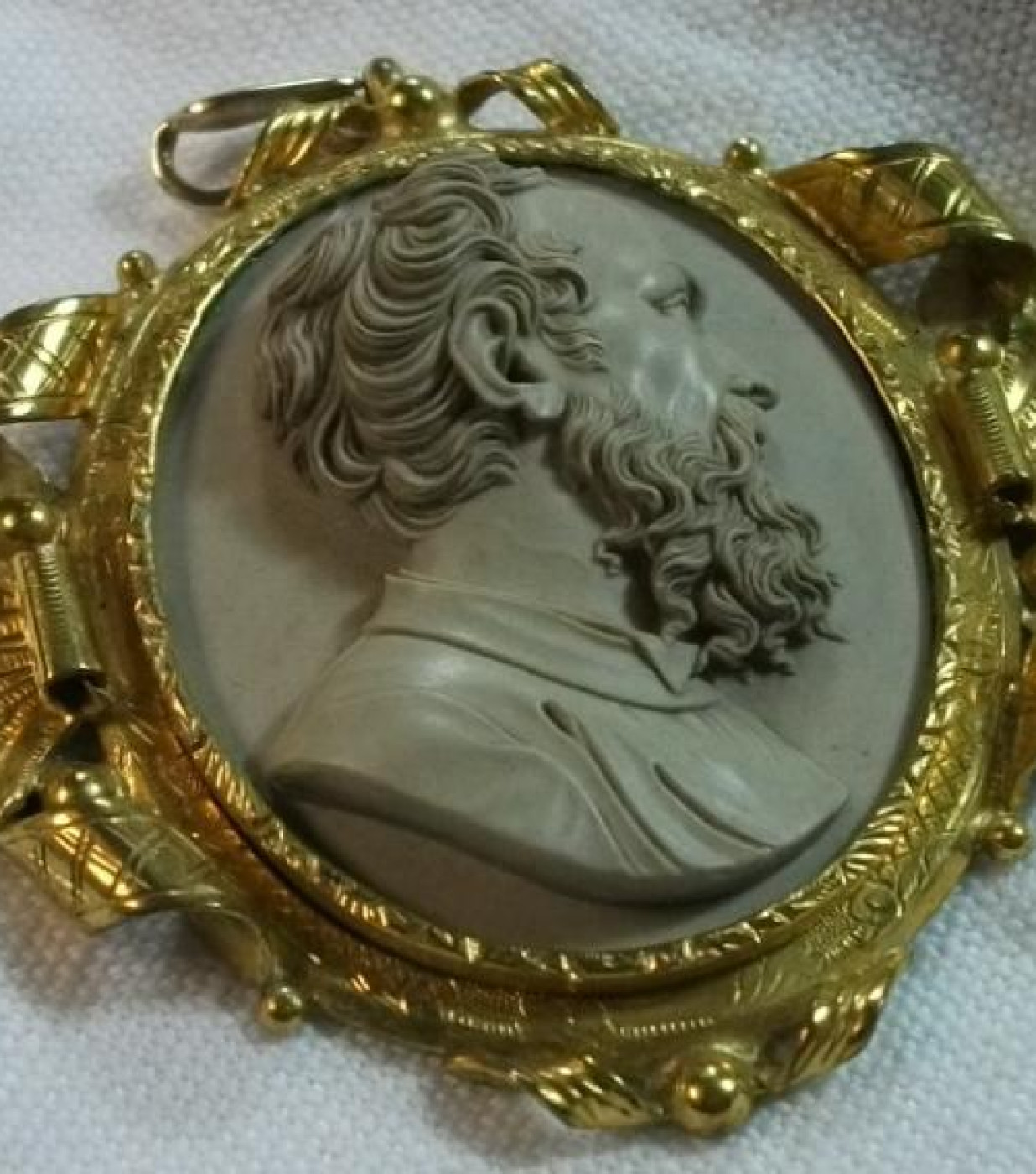 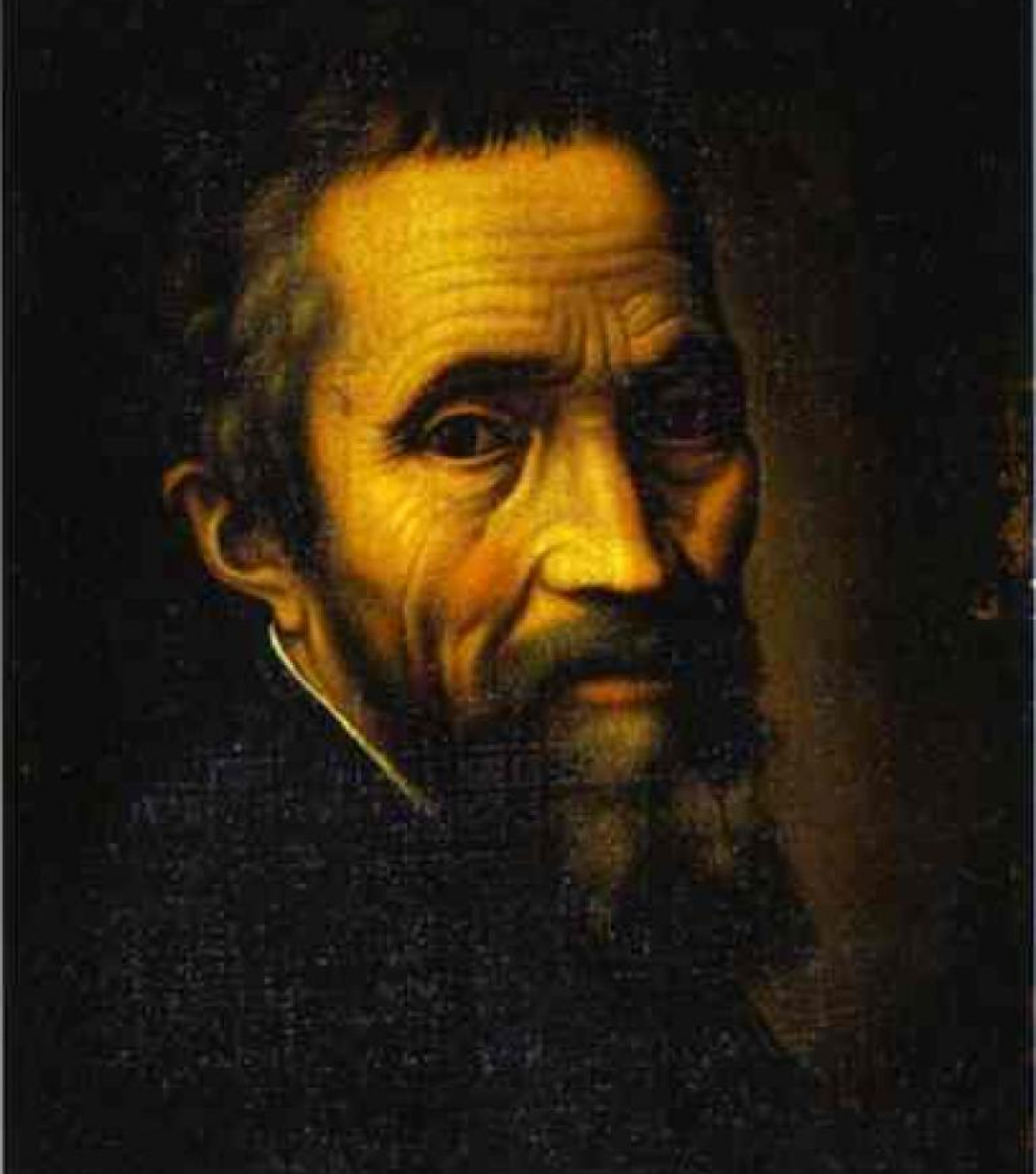 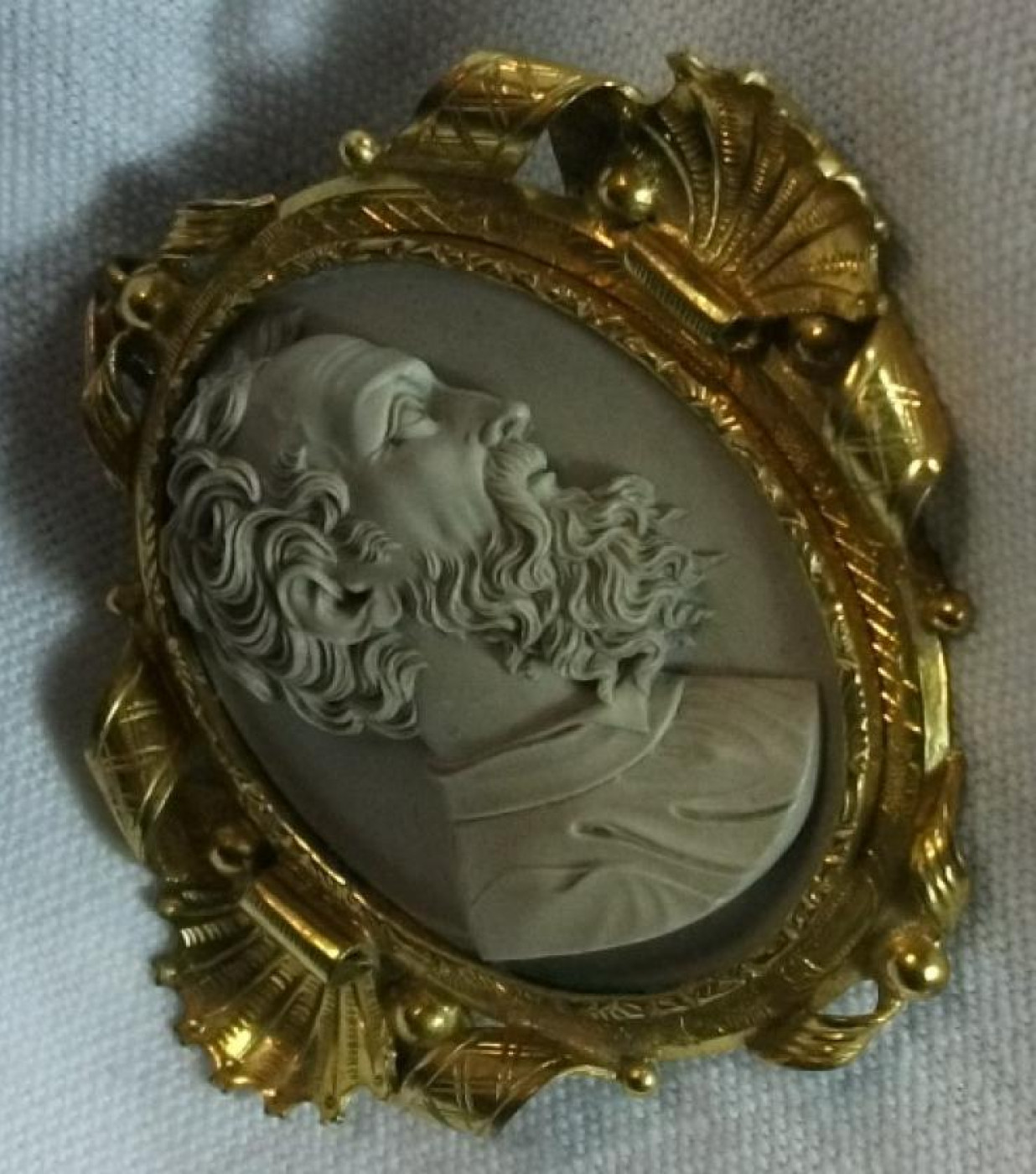 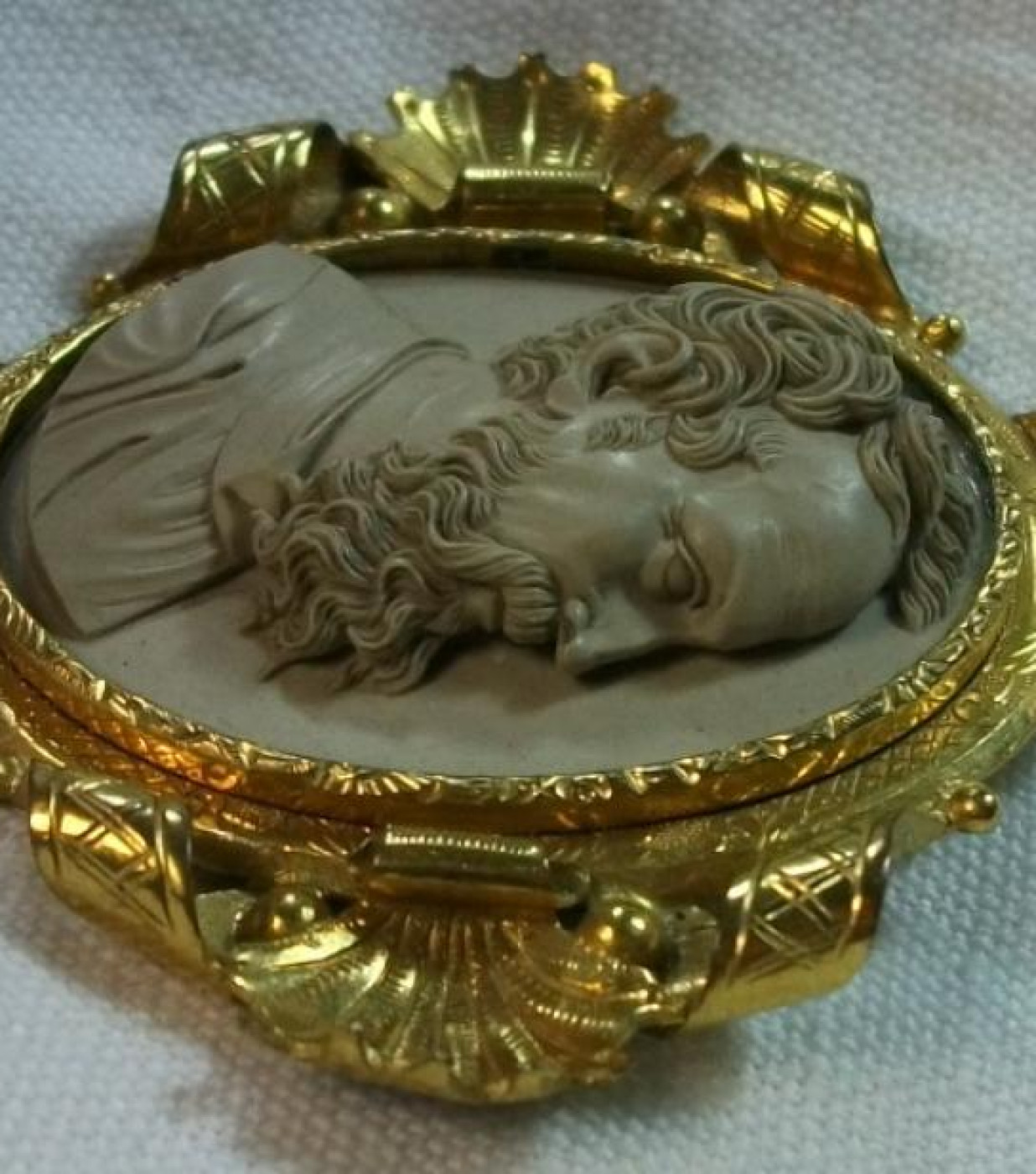 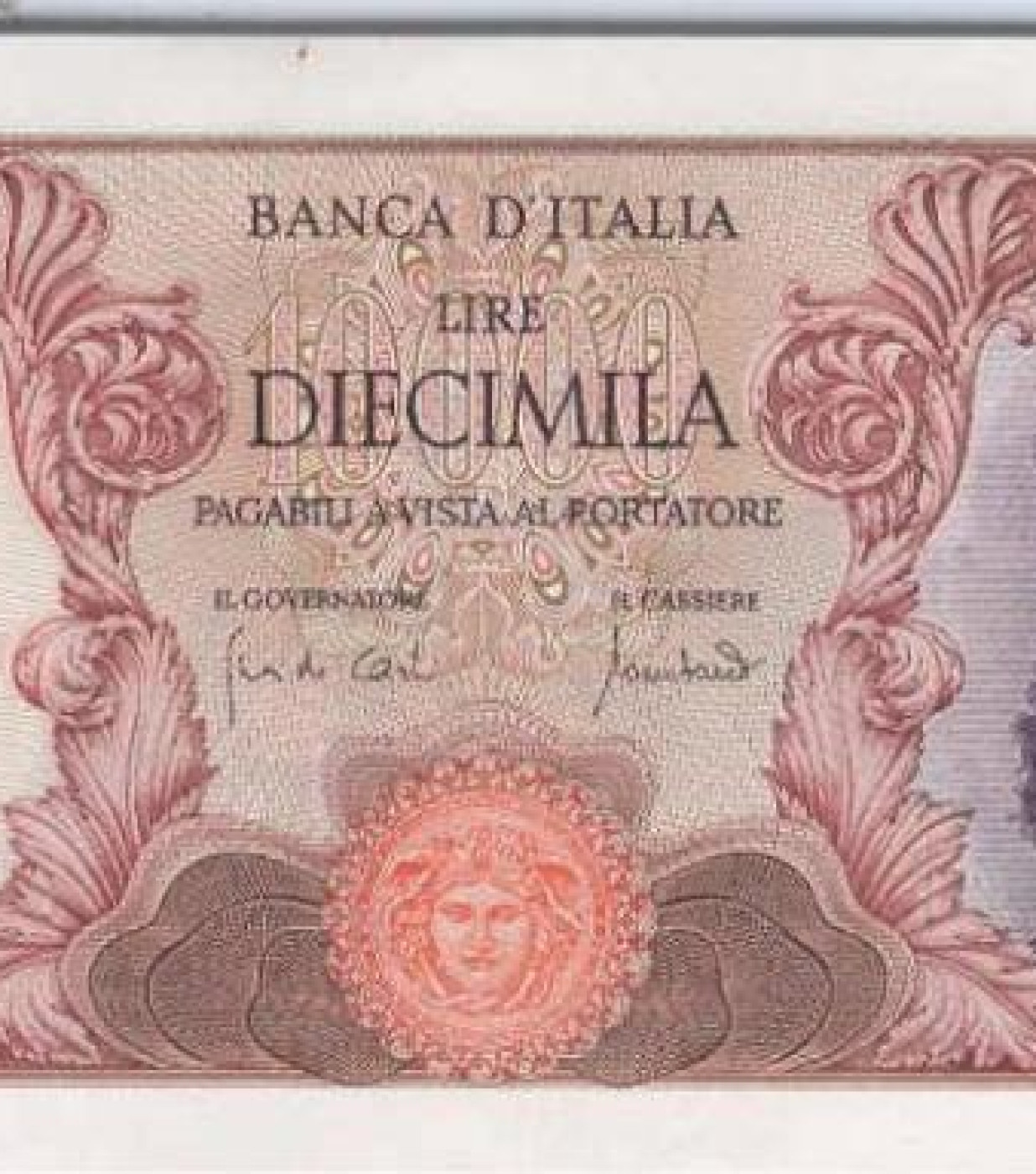 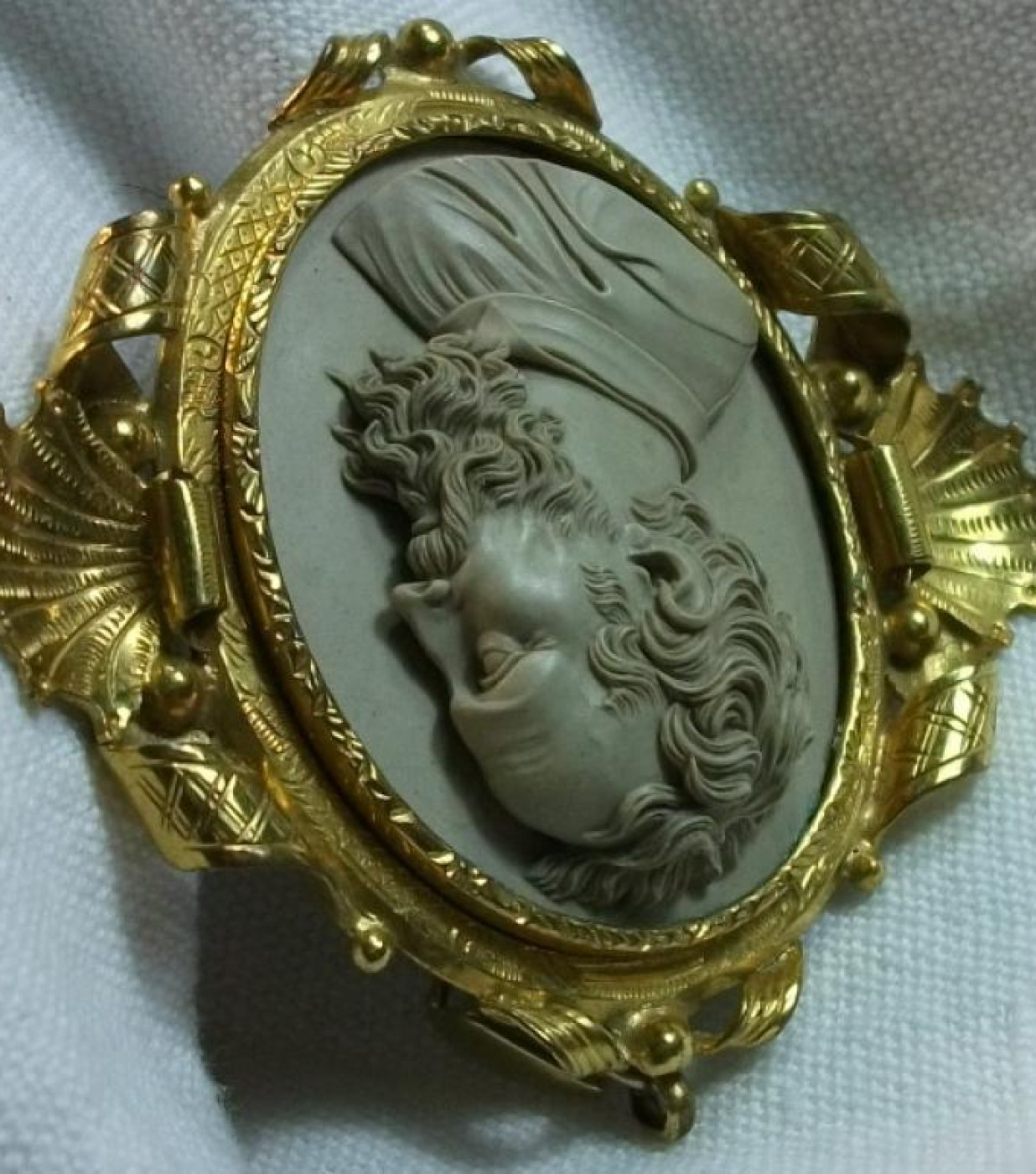 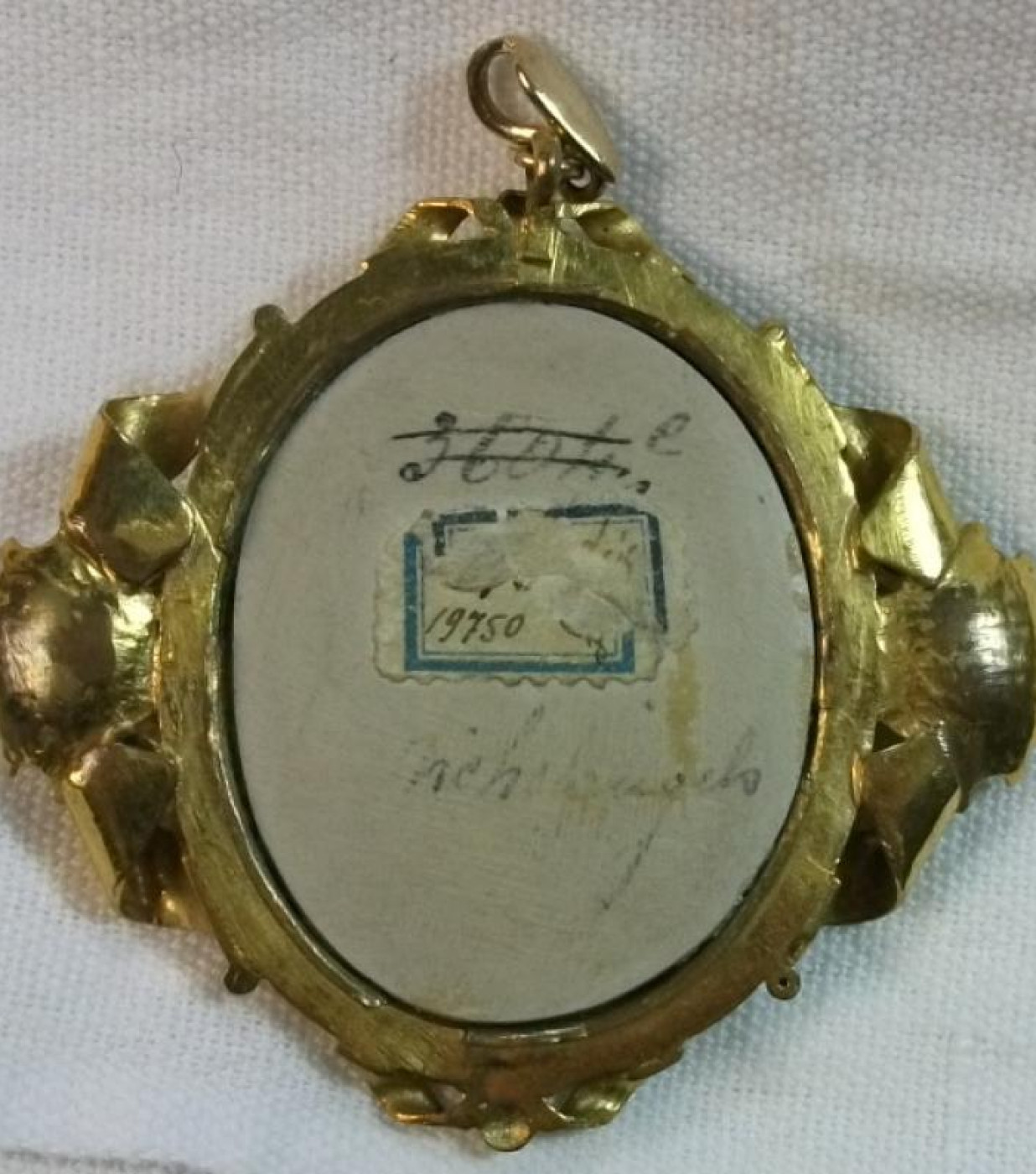 This one is another stunning work of art. A rarest , huge lava cameo depicting Michelangelo, the most famous Italian artist of all the times. It is a more than museum quality lava cameo. You can see even the vein on his head and his neck, the wrinkles on his forehead and around his eye, his hollow cheek. Simply outstanding. This cameo is just like a sculpture.  Look how the carver used all his great skill to carve an artwork. Believe me, even if I'm the cameo trade since many years, I always feel a deep emotion when I find such wonderful pieces. This is the first time that I see this subject carved on lava and what carving!  Everything in this cameo is so well made that I'm really amazed. The frame is gorgeous too, made of Pinchbeck which was in the past a valid alternative to gold that was very expensive and most of people could not afford it. Cameo and frame are both a stunning tribute to the one who probably has been one of greatest artist of the world.  This is the right frame to evidence the beauty of the cameo and to give to it a strong importance. This is another masterly carved cameo. A very desirable collectors piece, rare and museum quality cameo.
A bit of History:
Michelangelo di Lodovico Buonarroti Simoni (6 March 1475 – 18 February 1564), commonly known as Michelangelo, was an Italian Renaissance painter, sculptor, architect, poet, and engineer. Despite making few forays beyond the arts, his versatility in the disciplines he took up was of such a high order that he is often considered a contender for the title of the archetypal Renaissance man, along with his rival and fellow Italian Leonardo da Vinci Michelangelo's output in every field during his long life was prodigious; when the sheer volume of correspondence, sketches, and reminiscences that survive is also taken into account, he is the best-documented artist of the 16th century. Two of his best-known works, the Pietà and David, were sculpted before he turned thirty. Despite his low opinion of painting, Michelangelo also created two of the most influential works in fresco in the history of Western art: the scenes from Genesis on the ceiling and The Last Judgment on the altar wall of the Sistine Chapel in Rome. As an architect, Michelangelo pioneered the Mannerist style at the Laurentian Library. At 74 he succeeded Antonio da Sangallo the Younger as the architect of Saint Peter's Basilica. Michelangelo transformed the plan, the western end being finished to Michelangelo's design, the dome being completed after his death with some modification.In a demonstration of Michelangelo's unique standing, he was the first Western artist whose biography was published while he was alive. Two biographies were published of him during his lifetime; one of them, by Giorgio Vasari (Giorgio Vasari (30 July 1511 – 27 June 1574) was an painter, writer, historian and architect, who is today famous for his biographies of Italian artists, considered the ideological foundation of art-historical writing.) proposed that he was the pinnacle of all artistic achievement since the beginning of the Renaissance, a viewpoint that continued to have currency in art history for centuries. In his lifetime he was also often called Il Divino ("the divine one"). One of the qualities most admired by his contemporaries was his "terribilità", a sense of awe-inspiring grandeur, and it was the attempts of subsequent artists to imitate Michelangelo's impassioned and highly personal style that resulted in Mannerism, the next major movement in Western art after the High Renaissance.