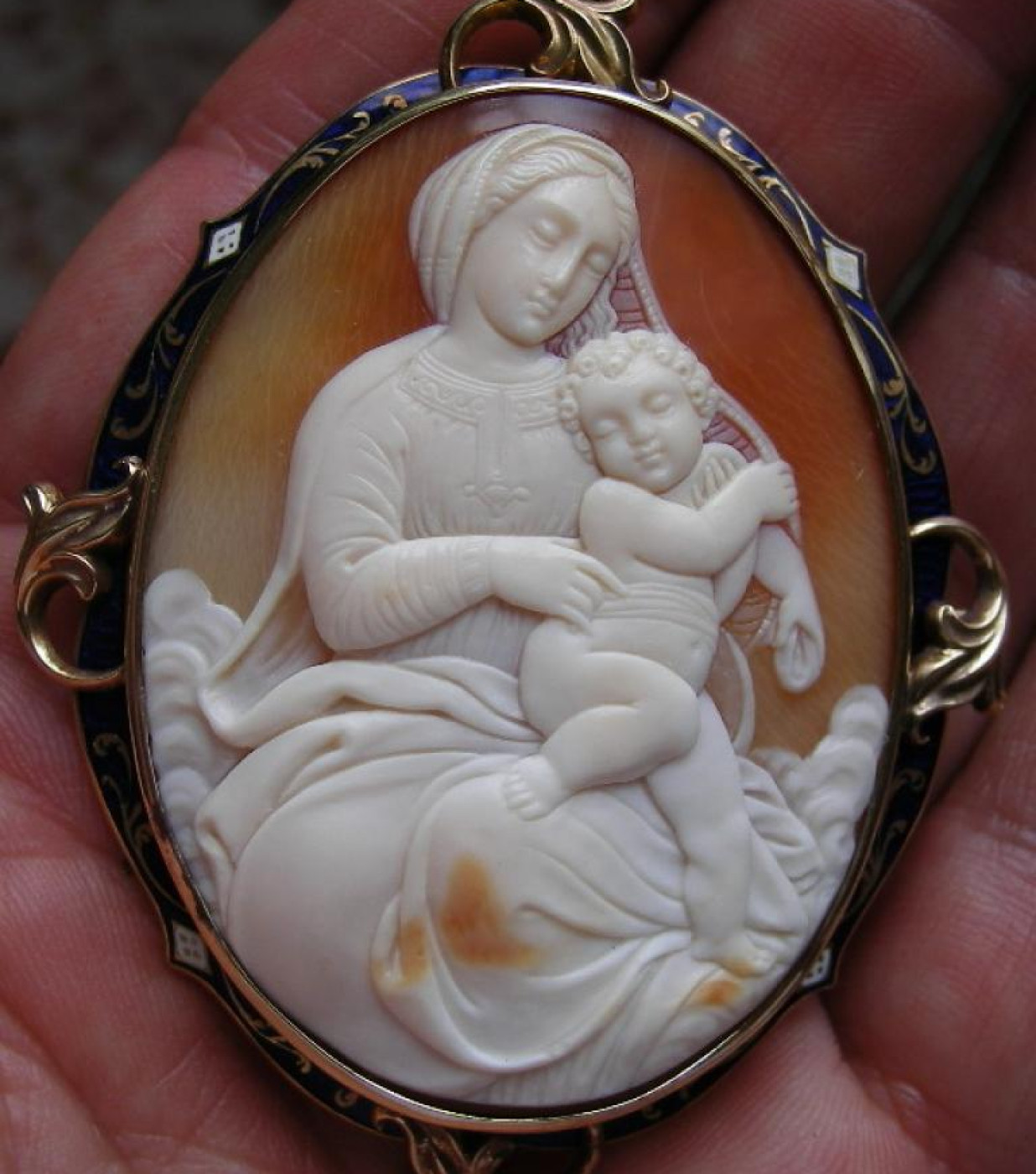 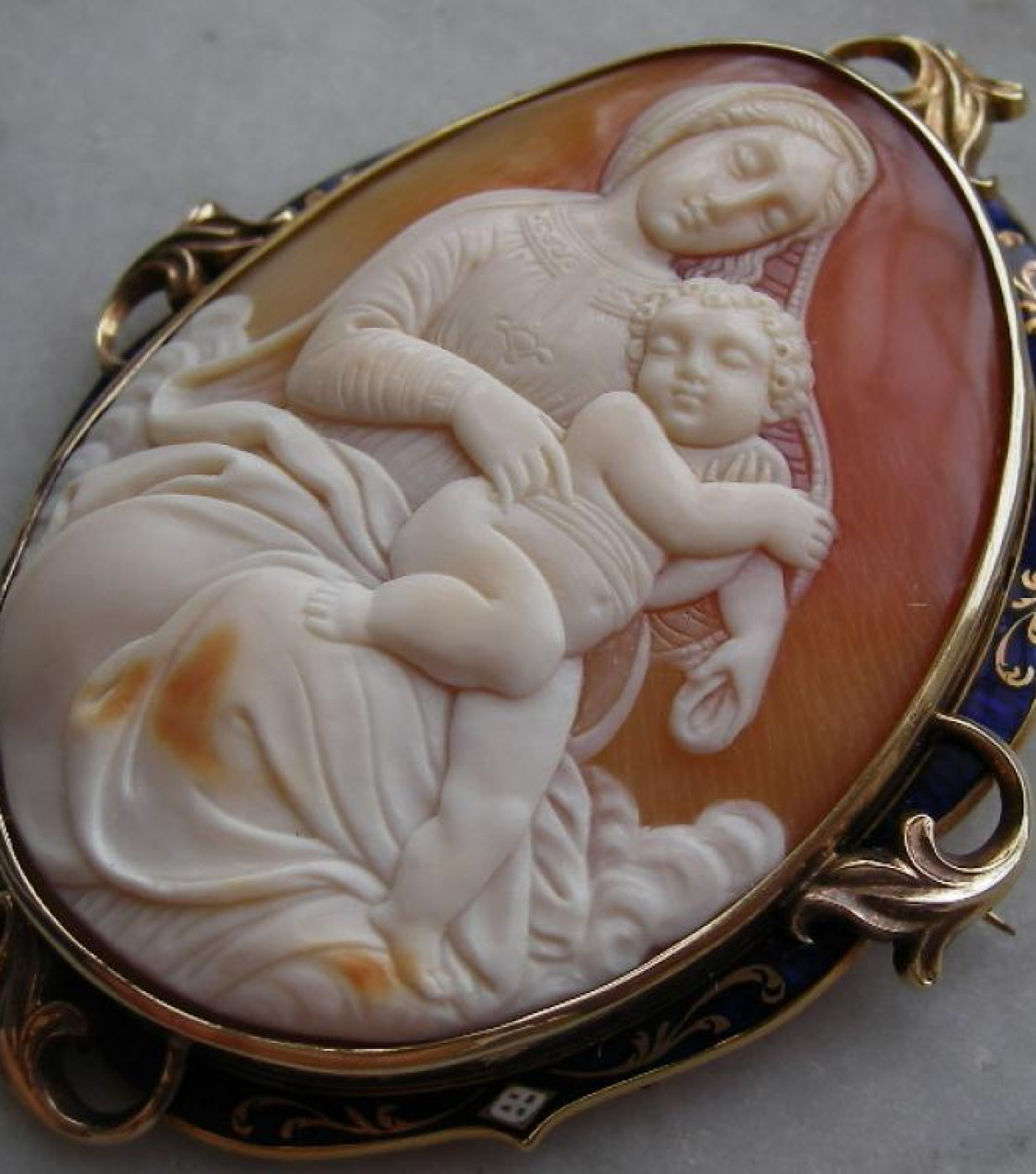 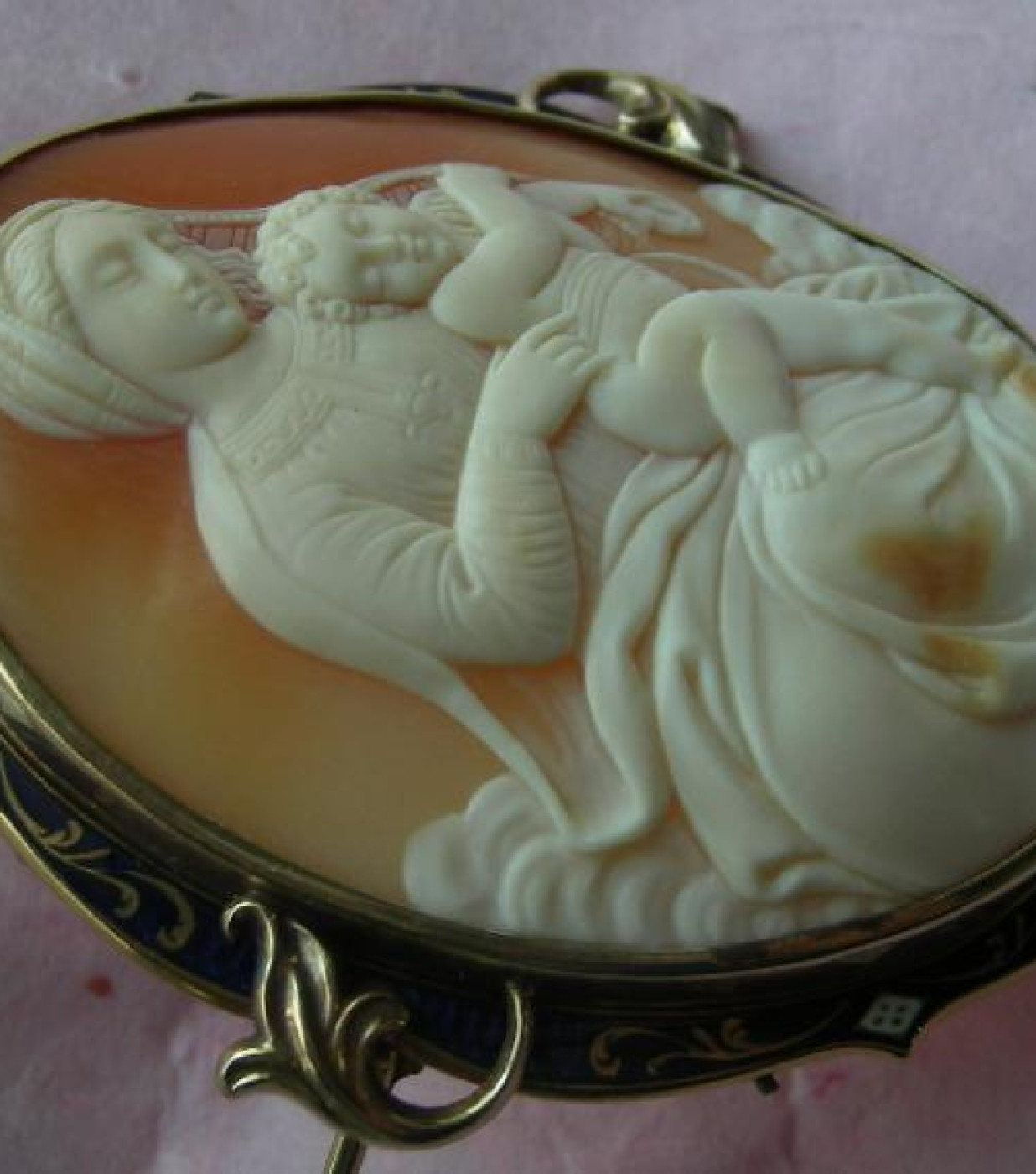 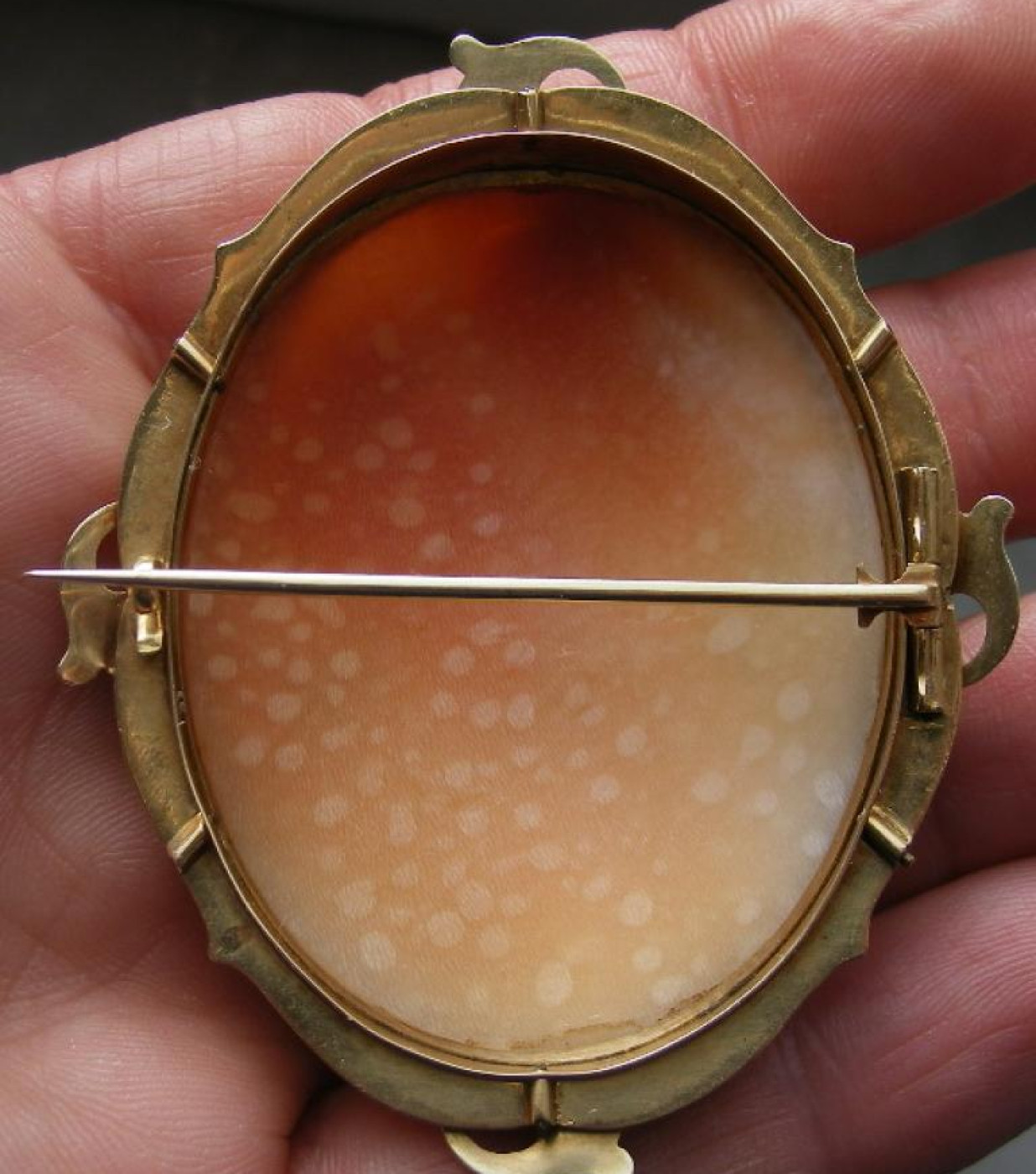 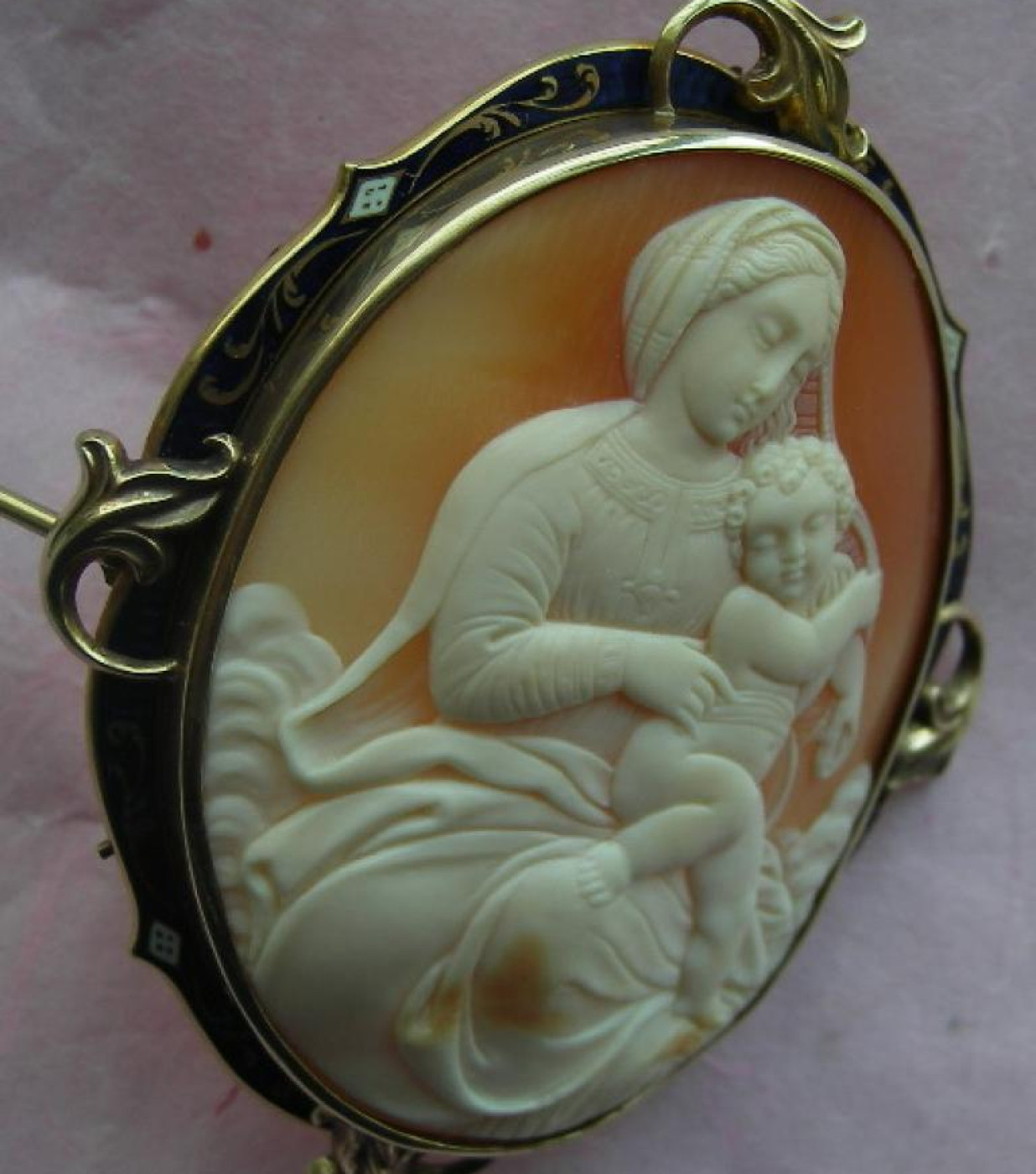 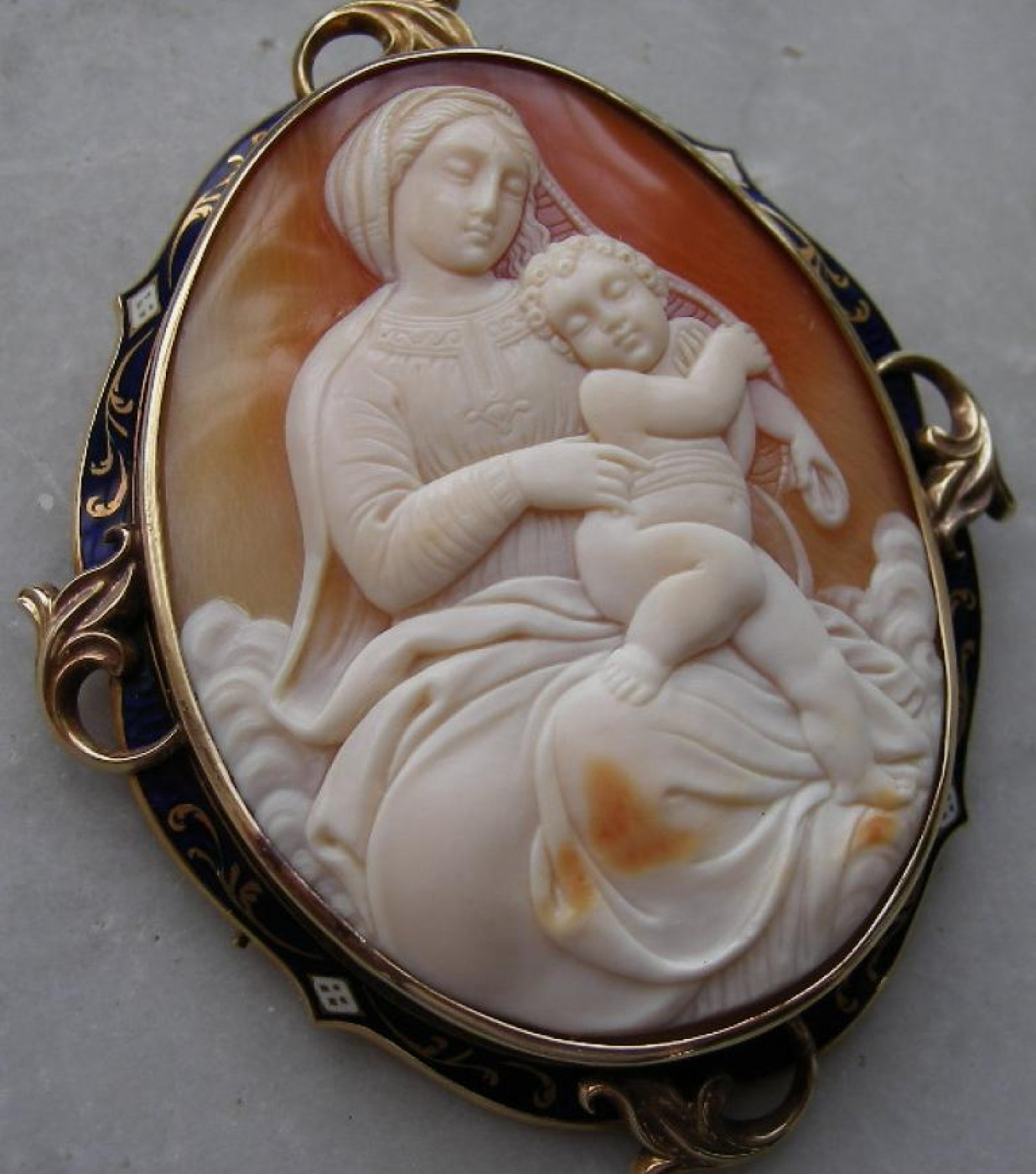 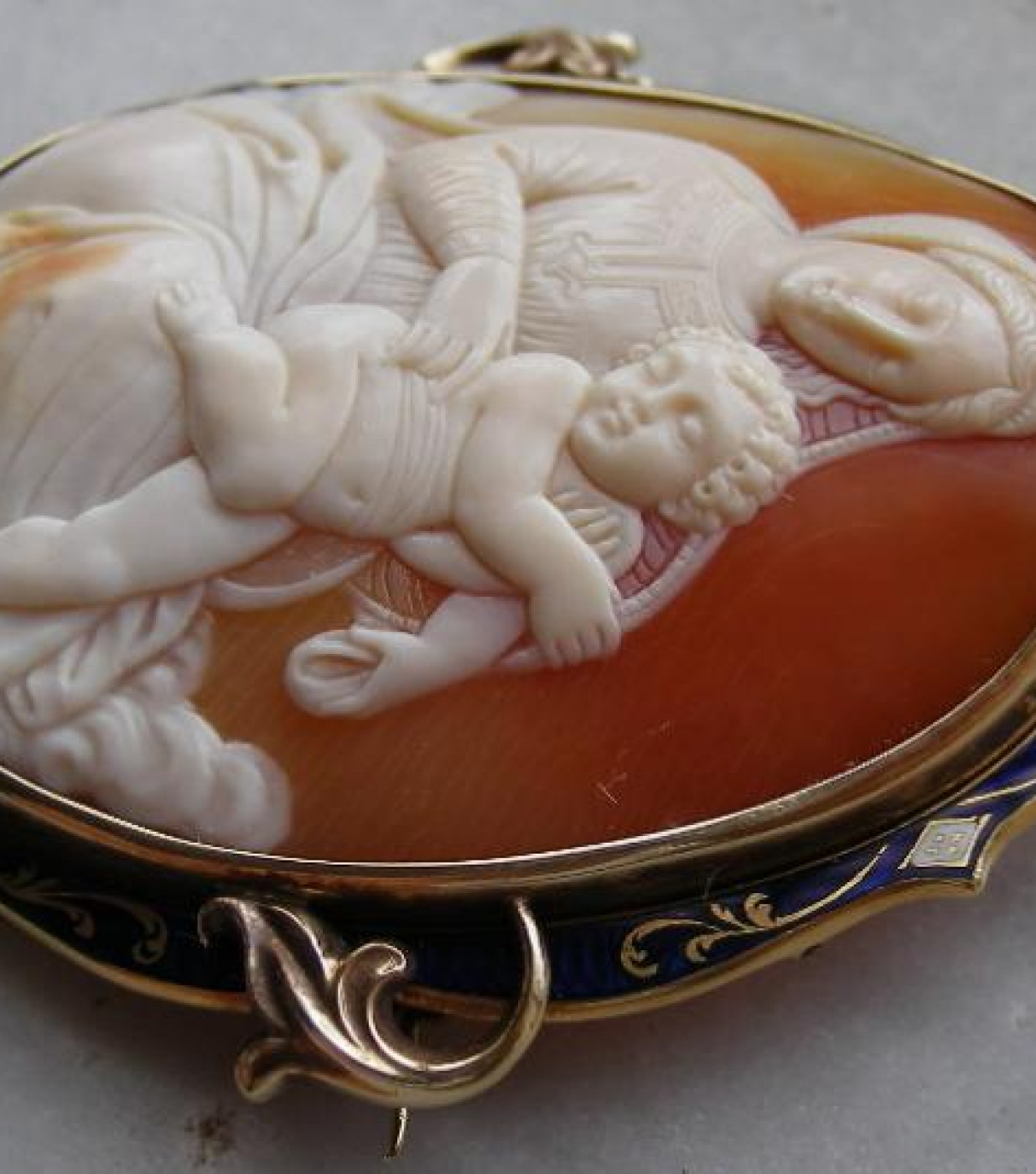 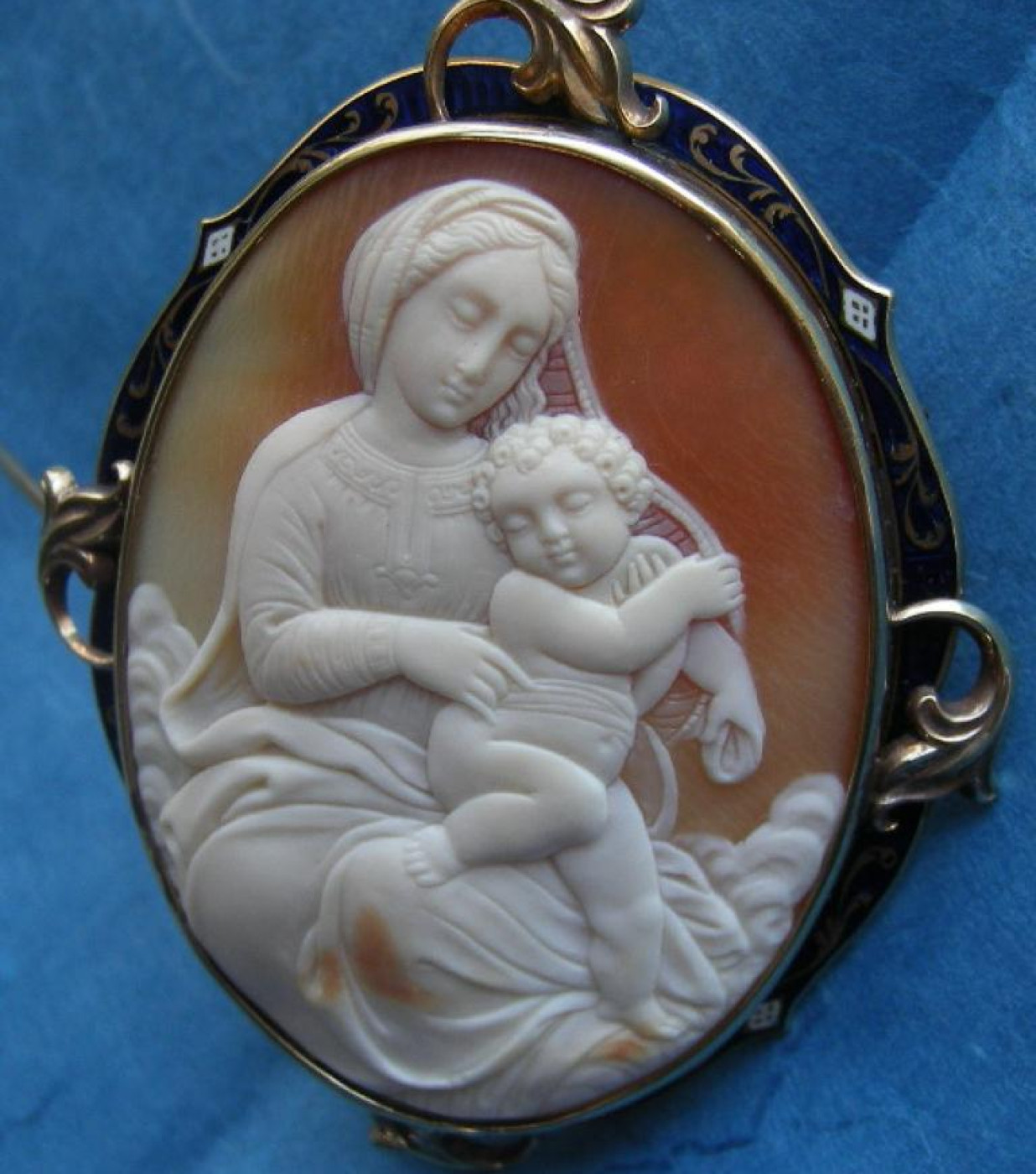 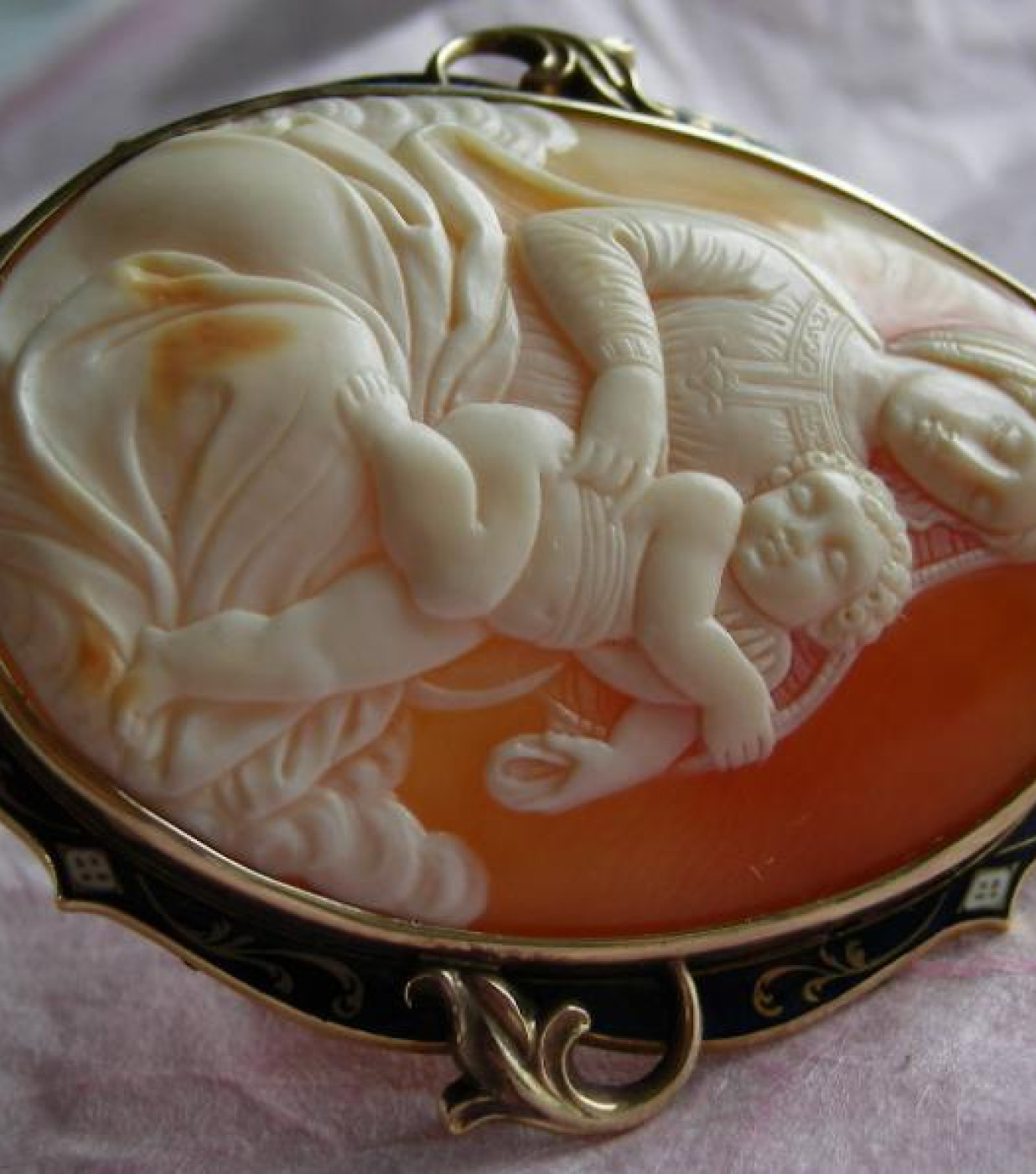 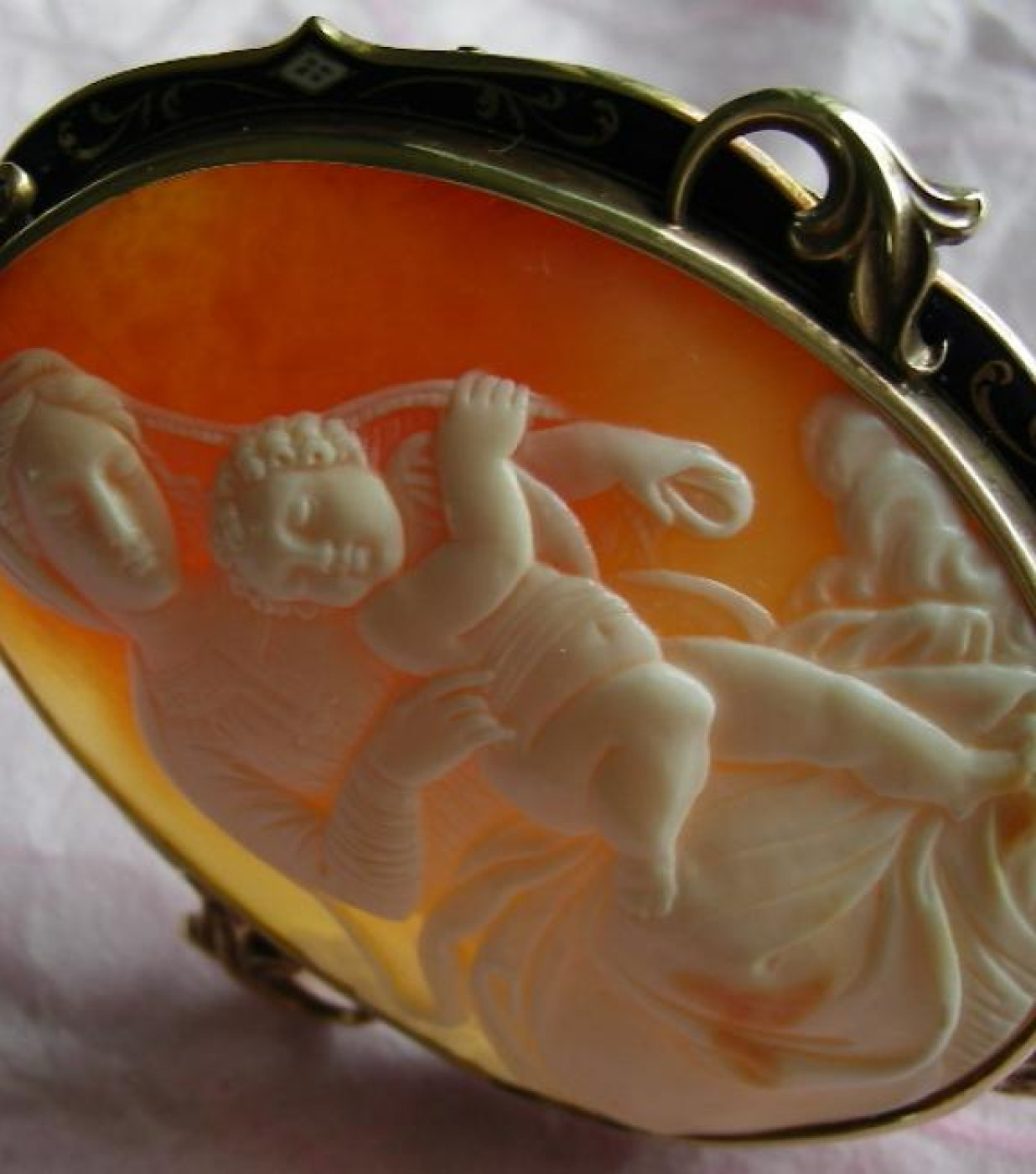 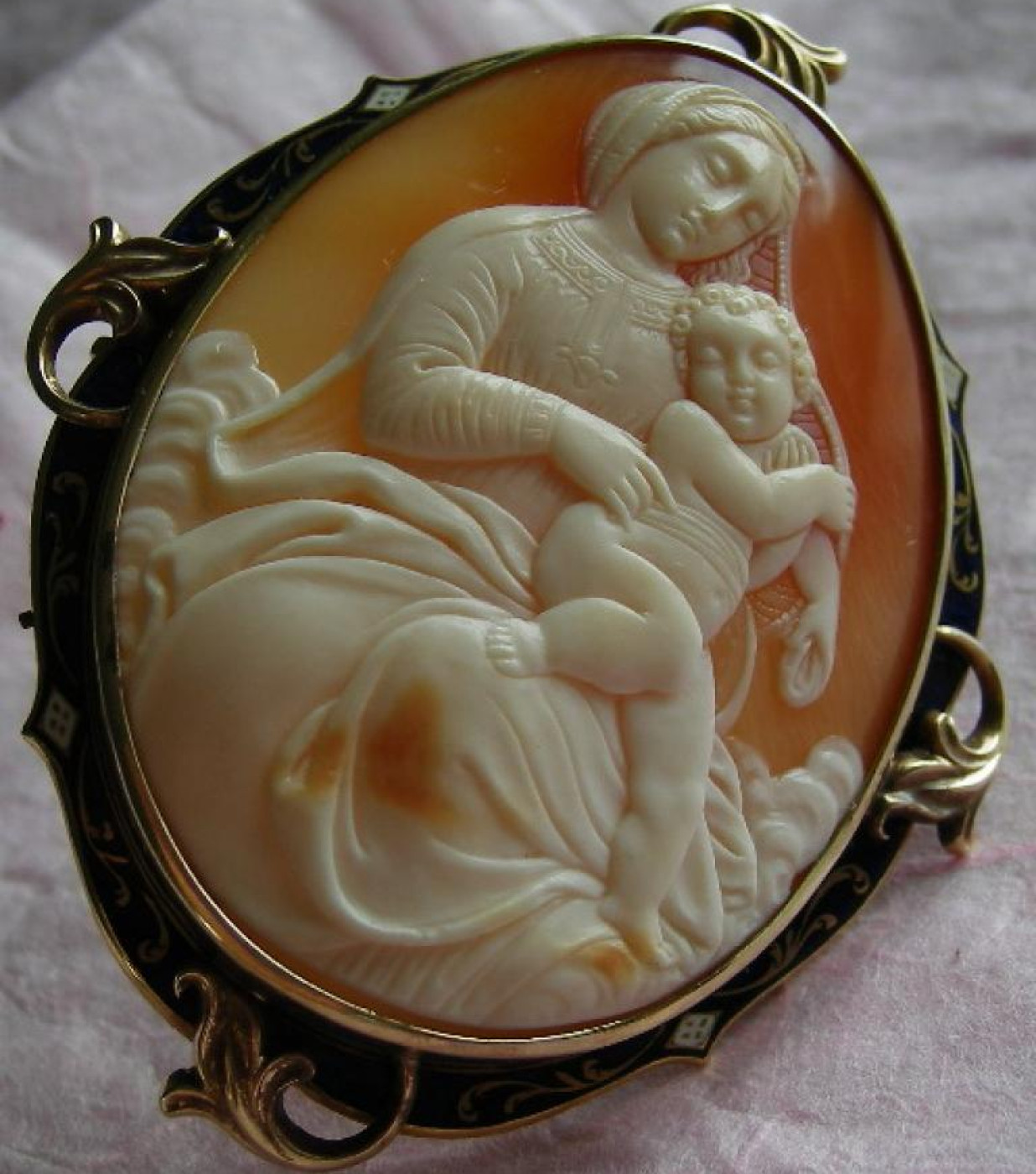 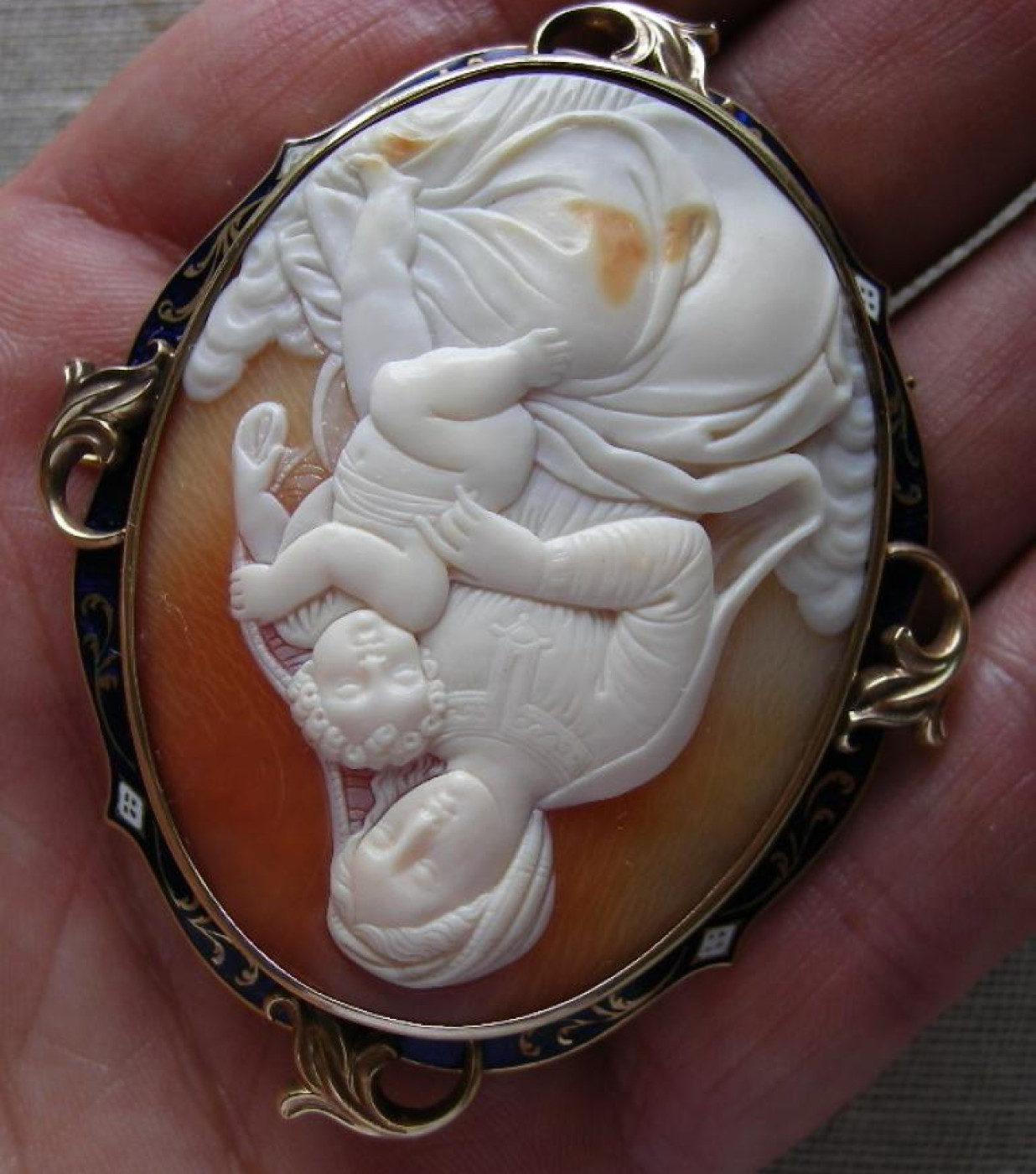 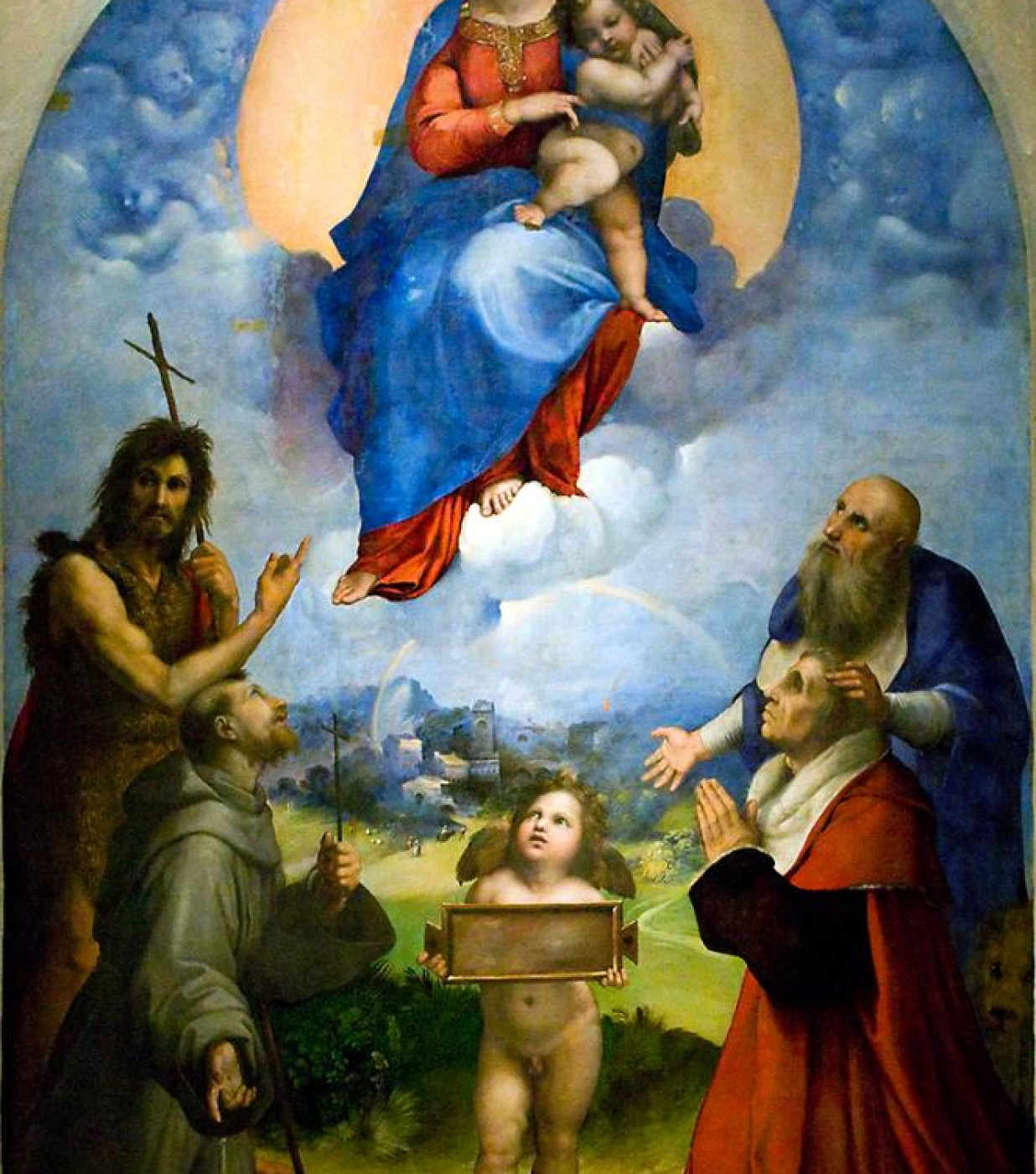 Museum quality cameo depicting a Madonna and Jesus. Rarest subject never seen before now, after a painting of Raffaello called "Madonna of Foligno" painted in 1511/1512 , now in the Vatican Museum. The picture of the painting is shown below. There is the painting, at the very end of this page, and the Madonna painting's details just at the end of the description. The frame is spectacular too, 18 kt gold and blue enamel, perfect with no loss.This is an incredible work of art,  very detailed cameo, carved by an artist. Rarest cameo and subject very desirable collectors' piece.
The Madonna of Foligno is a painting by the Italian High Renaissance painter Raphael. The painting was executed for Sigismondo de' Conti, secretary of Pope Julius II, in 1511-1512. It was to be placed in the church of Santa Maria in Aracoeli in Rome, where Sigismondo was buried. In 1512 it was moved to the monastery of St. Anne in Foligno, whence the name. Raphael's pictorial research had been enriched by his solutions regarding the use of light in theExpulsion of Heliodorus and the Liberation of St. Peter. These pictorial devices reappear in the Madonna of Foligno. The Madonna and Child, borne by a cloud of angels and framed by an orange disk, dominate the group of saints below them, among whom is the donor. This group includes - from left to right - St. John the Baptist, St. Francis, Sigismondo de' Conti and St. Jerome. A small angel at the centre of the composition holds a small plaque which was originally intended to carry the dedicatory inscription. The painting was commissioned to commemorate a miracle in which the donor's house in Foligno was struck by lightning or - according to another version - was struck by a projectile during the siege of Foligno, although it was not damaged. The stormy atmosphere of the landscape background and the flash of lightning (or explosion) which strikes the Chigi Palace (visible at left) illustrate the legend. The strong characterization of the figures, the volumetric fullness of the putti and the refined chiaroscuro distinguish the panel (which was taken as loot by Napoleon's army in 1799 and returned in 1815) as a work of the mature artist.