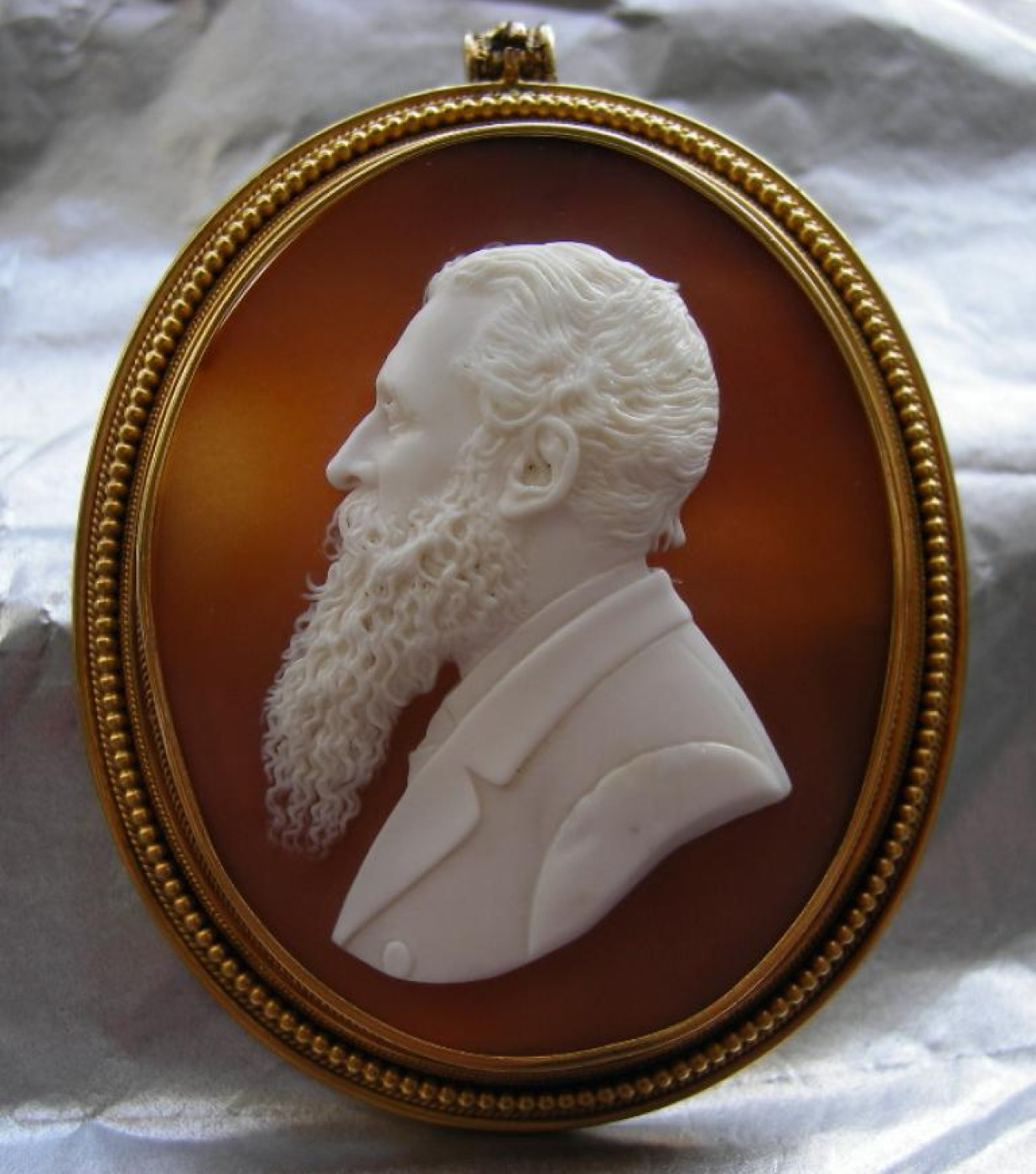 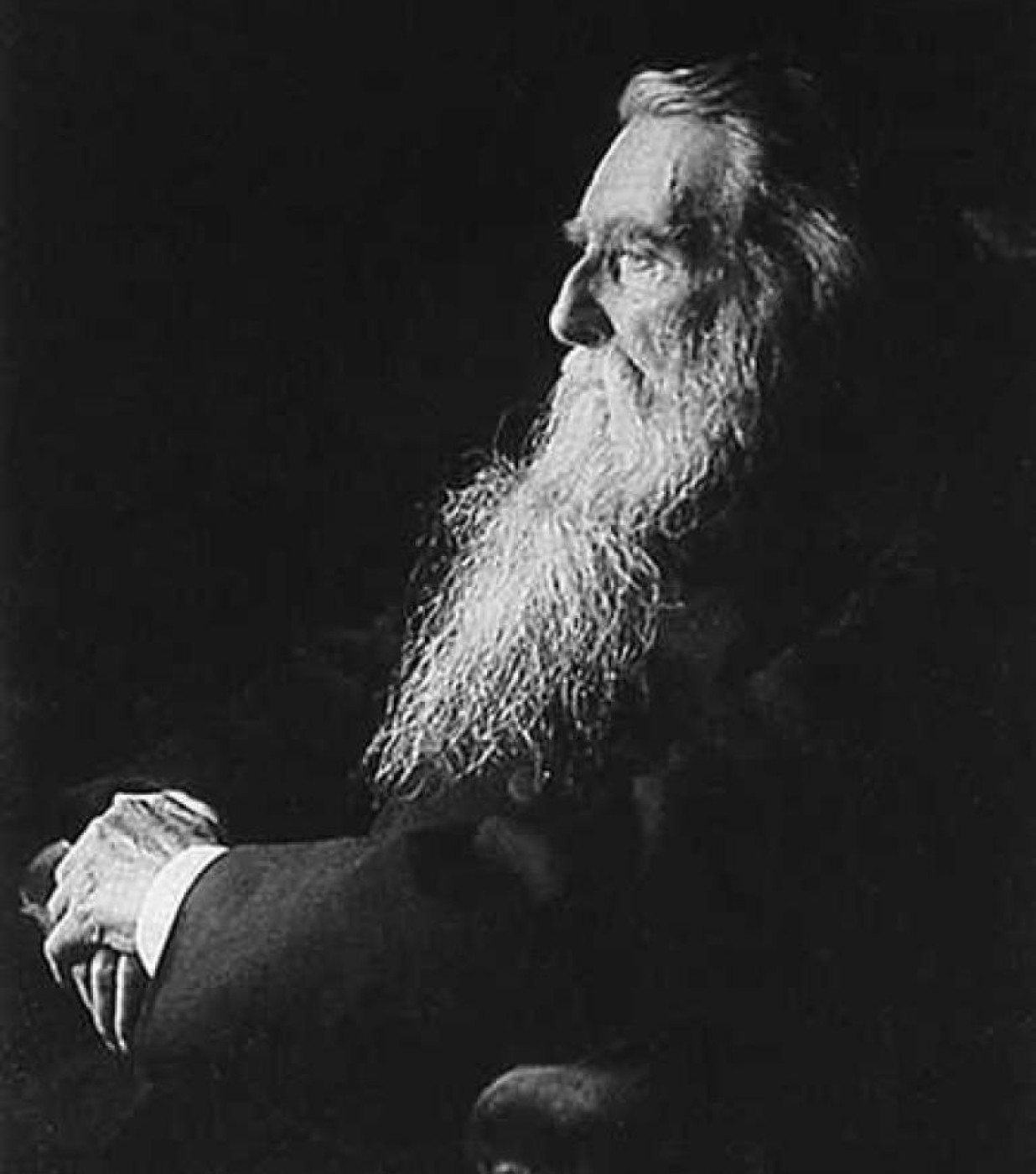 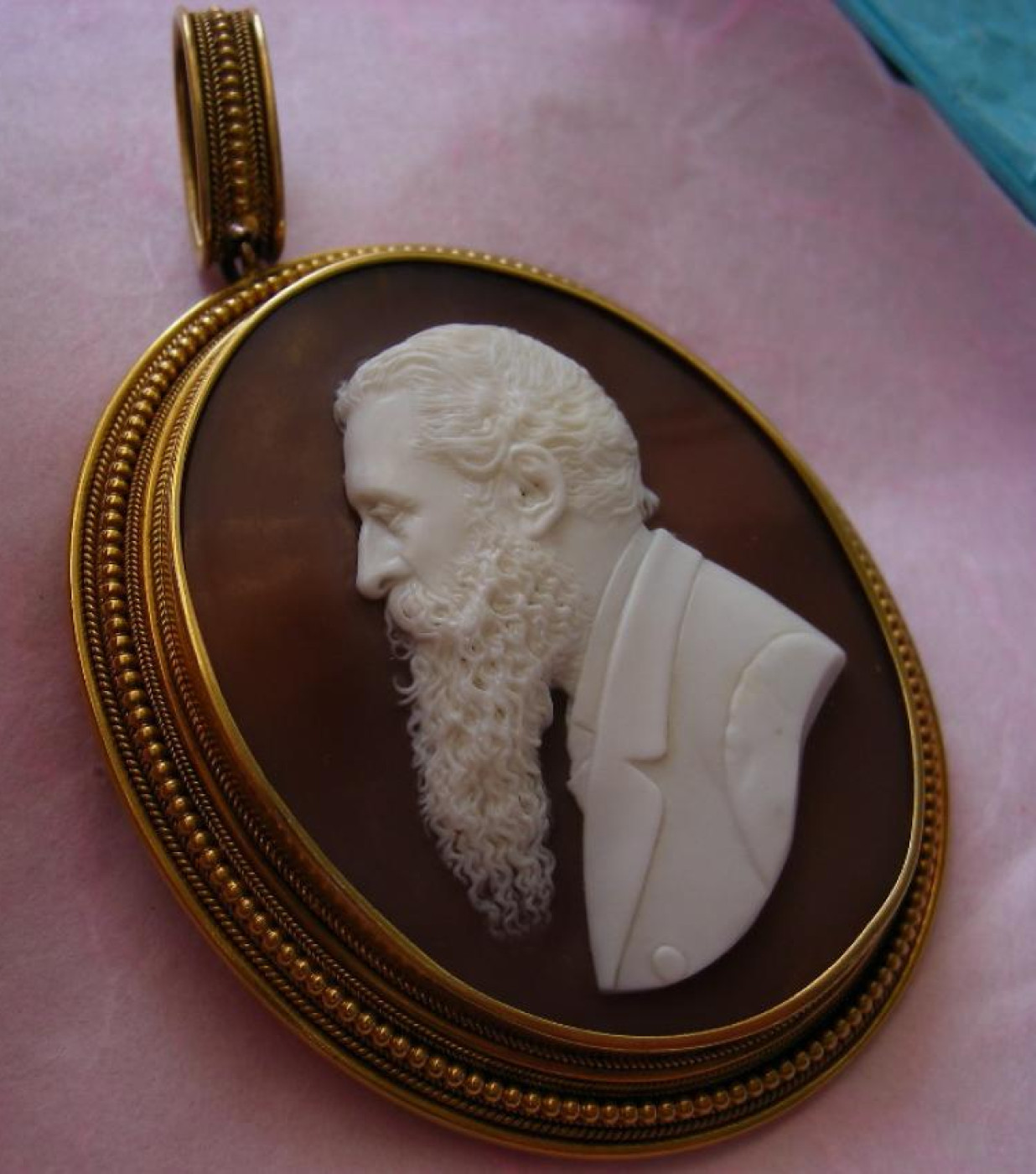 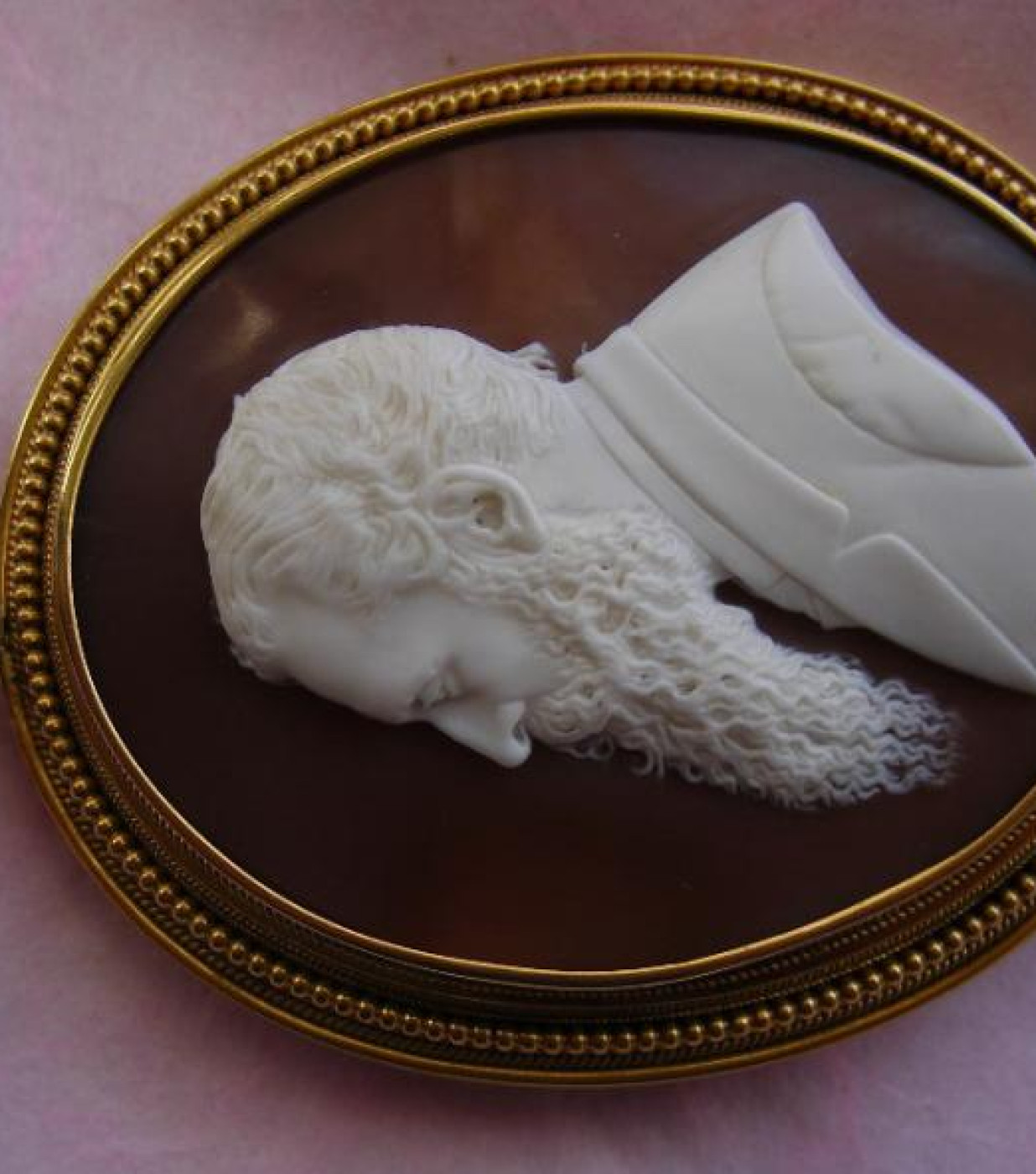 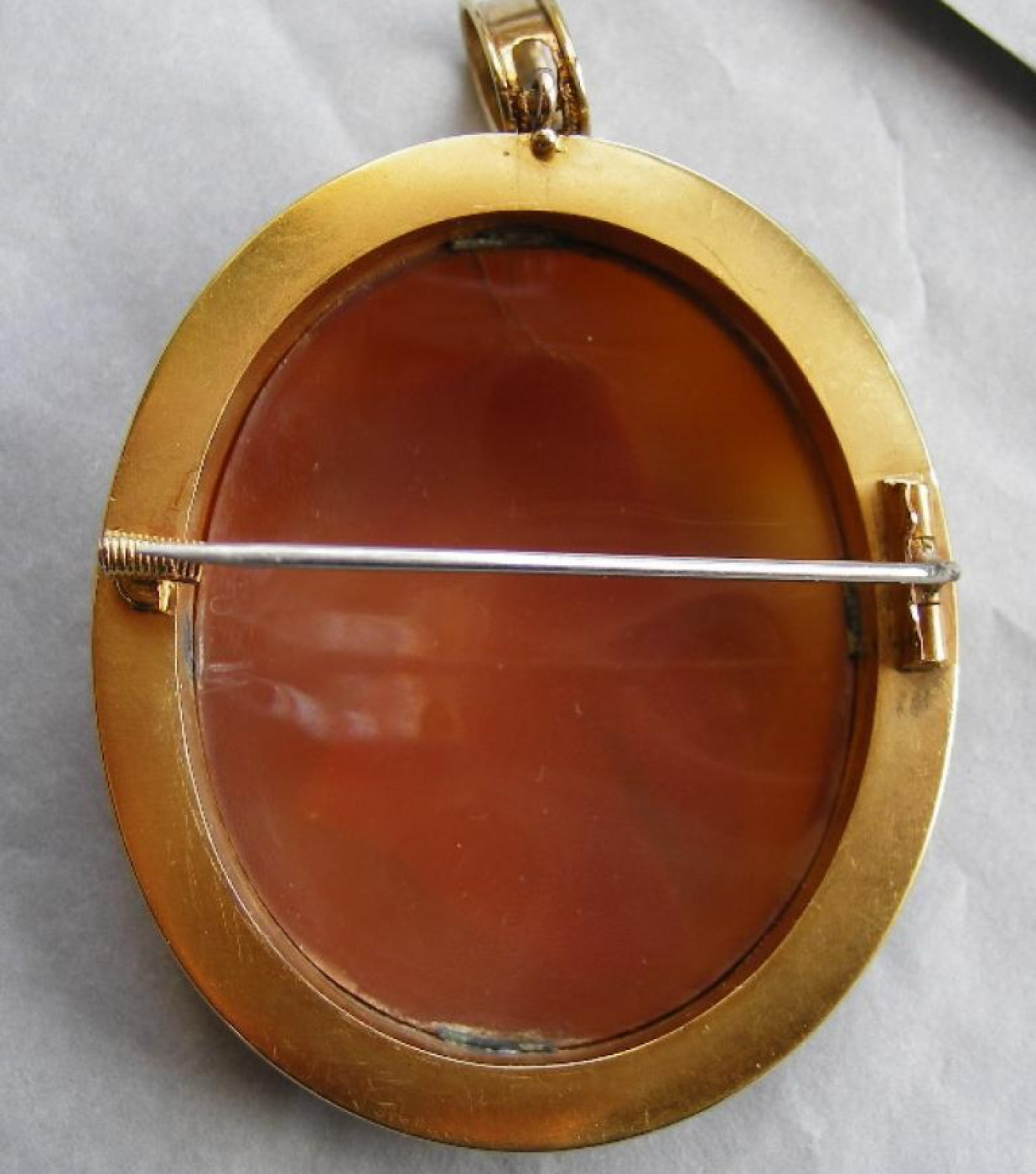 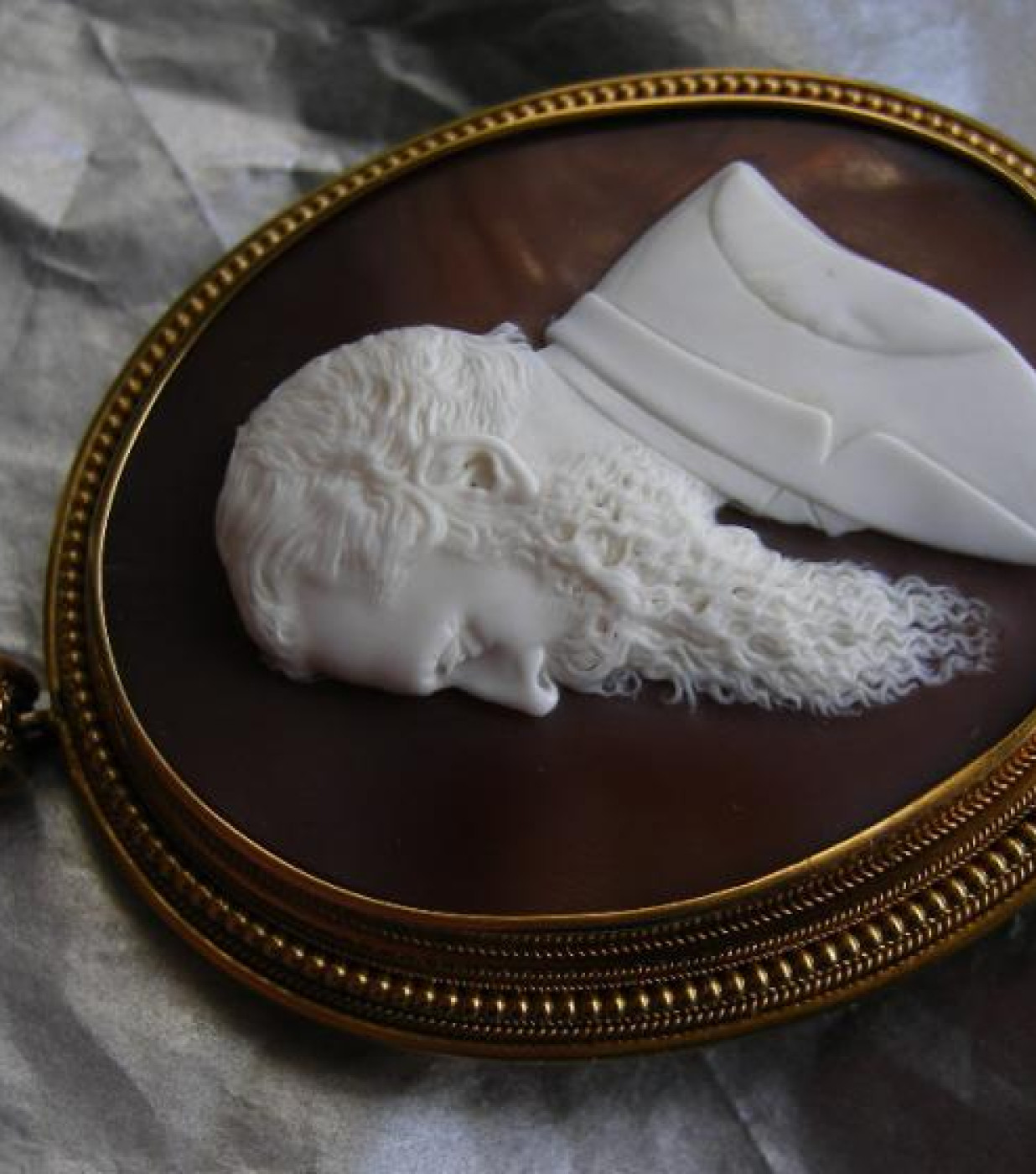 More than Museum Quality cameo depicting probably John Ruskin, (8 February 1819 – 20 January 1900) was a British art critic and social thinker, also remembered as an author, poet and artist. His essays on art and architecture were extremely influential in the Victorian and Edwardian eras. The picture of the poet above is from 1894, the cameo is earlier probably around 1870 (read more below about him). Cameo is not signed but very probably carved by Luigi Rosi, one of most important carver of the 800's.  I think that it could have been carved by Luigi Rosi because of the carving, Rosi was one of the few carvers who has the peculiarity to carve each single hair perfectly and he used also to carve the eyelashes, just like in this cameo, another thing which drives me to think that it could be from Rosi is the frame, identical (not similar just perfectly identical) to another one I have had the pleasure to see that framed a cameo carved by Rosi. See picture below. Cameo is not signed but I'm almost totally sure that it is a Luigi Rosi one, then often carvers did not sign their cameos. This cameo is breathtaking, a real work of art.  Have you ever seen something of more magnificent? The frame is another work of art, finely worked in Etruscan revival style. This is another masterly carved cameo. A very desirable collectors piece, rare and museum quality cameo.
A bit of History:
Ruskin was born in London and raised in south London, the only child of a wine importer who co-founded the company that became Allied Domecq. He was educated at home and went on to study at King's College London and Christ Church, Oxford. At Oxford, he enrolled as a "gentleman-commoner", a class of students who were not expected to pursue a full course of study. His own studies were erratic, and he was often absent. However, he impressed the scholars of Christ Church after he won the Newdigate prize for poetry, his earliest interest. In consequence and despite a protracted period of serious illness, Oxford awarded him an honorary fourth-class degree. His first work, serialised in London's Architecture Magazine in 1836-37, under the pen name "Kata Phusin" (Greek for "according to Nature") was The Poetry of Architecture. This was a study of cottages, villas, and other dwellings which centred around a Wordsworthian argument that buildings should be sympathetic to local environments, and should use local materials. Soon afterwards, in 1839, he published, inTransactions of the Meteorological Society (pages 56-59), his "Remarks on the present state of meteorological science". He went on to publish the first volume of one of his major works,Modern Painters, in 1843, under the anonymous identity "An Oxford Graduate". This work argued that modern landscape painters — and in particular J. M. W. Turner— were superior to the so-called "Old Masters" of the post-Renaissance period. Such a claim was controversial, especially as Turner's semi-abstract late works were being denounced by some critics as meaningless daubs. The degree to which Ruskin reversed an anti-Turnerian tide may have been overemphasised in the past, as Turner was a renowned and major figure in the early Victorian art world and a prominent member of the Royal Academy. Ruskin's criticisms of Old Masters like Gaspard Dughet (Gaspar Poussin), Claude Lorrain, and Salvator Rosa, was much more controversial, given the immense respect they held at the time. The attack on the old masters centred on what Ruskin perceived as their lack of attention to natural truth. Rather than 'going to nature', as Turner did, the old masters, 'composed' or invented their landscapes in their studios. For Ruskin, modern painters like Turner and James Duffield Harding (Ruskin's art tutor) showed a much more profound understanding of nature, observing the 'truths' of water, air, clouds, stones, and vegetation.
Ruskin considered some Renaissance masters, notably Titian and Dürer, to have shown similar devotion to nature, but he attacked even Michelangelo as a corrupting influence on art. The second half of Modern Painters I consists of detailed observations by Ruskin of exactly how clouds move, how seas appear at different times of day, or how trees grow, followed by examples of error or truth from various artists. Ruskin had already met and befriended Turner, and eventually became one of the executors of his will. Many long believed that, as an executor, Ruskin took it upon himself in 1858 to destroy a large number of Turner's sketches because of their 'pornographic' subject matter but more recent discoveries cast doubt on this idea (see below). Ruskin followed Modern Painters I with a second volume, developing his ideas about symbolism in art. He then turned to architecture, writing The Seven Lamps of Architecture and The Stones of Venice, both of which argued that architecture cannot be separated from morality, and that the "Decorated Gothic" style was the highest form of architecture yet achieved. By this time, Ruskin was writing in his own name and had become the most famous cultural theorist of his day.