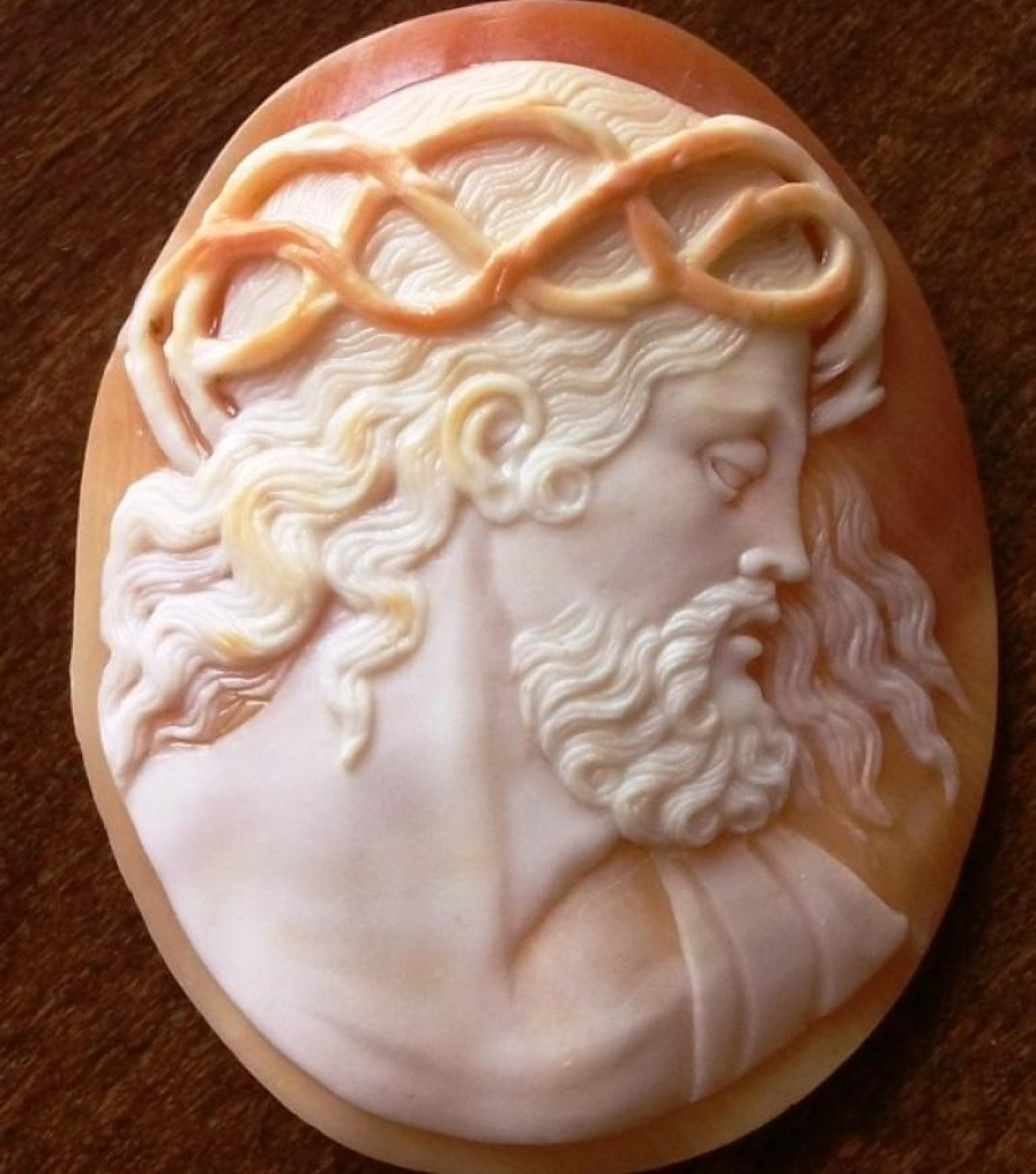 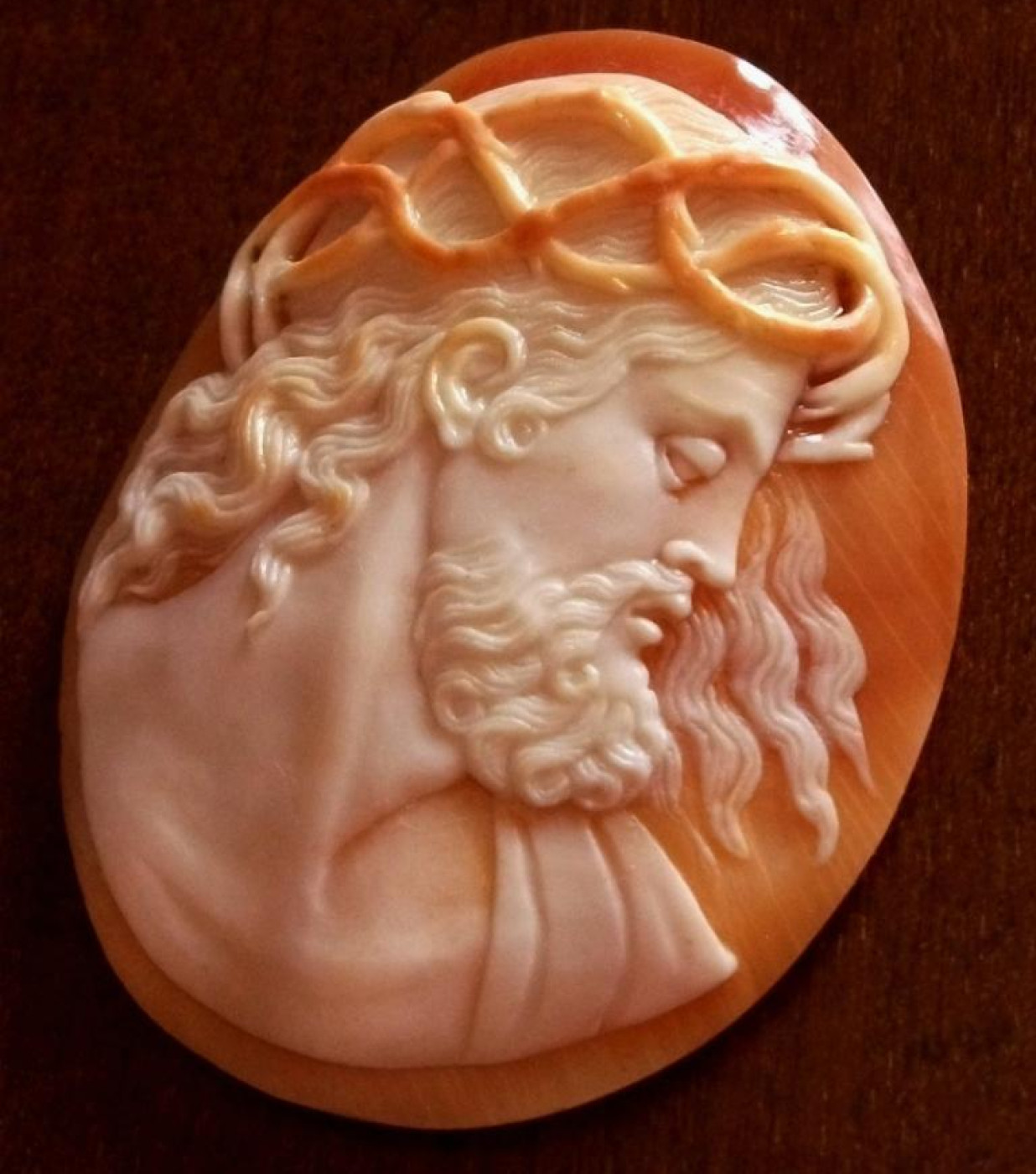 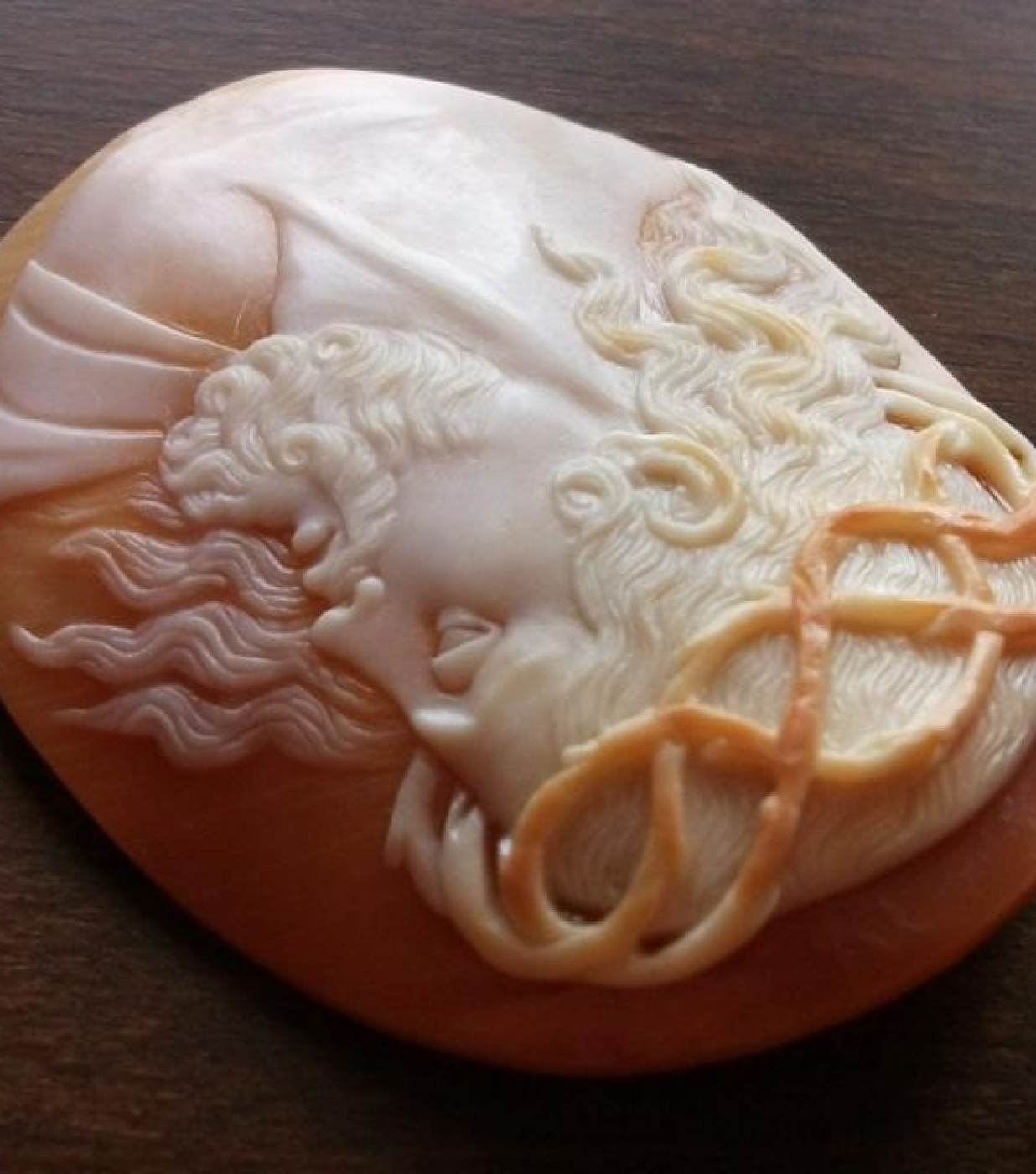 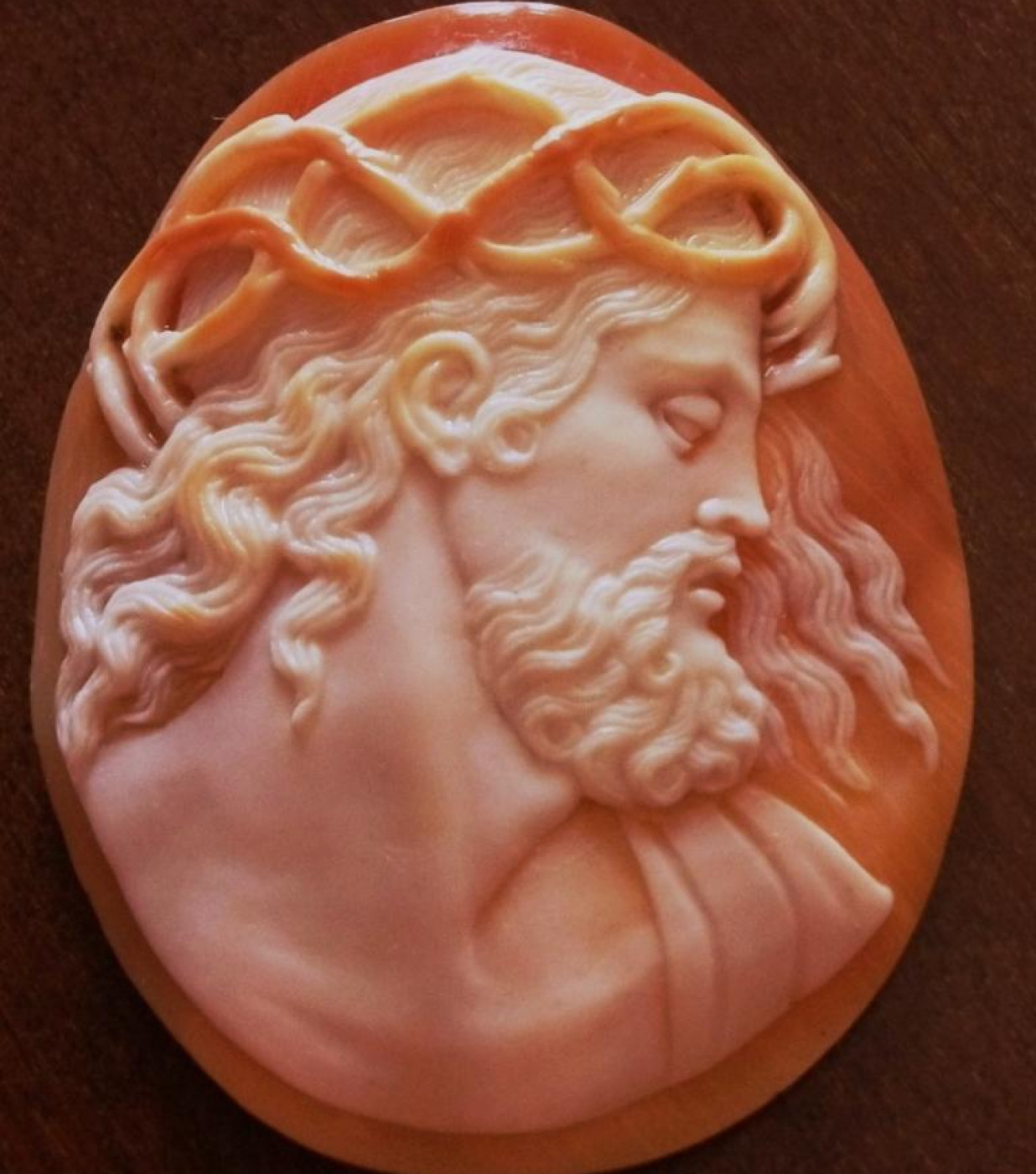 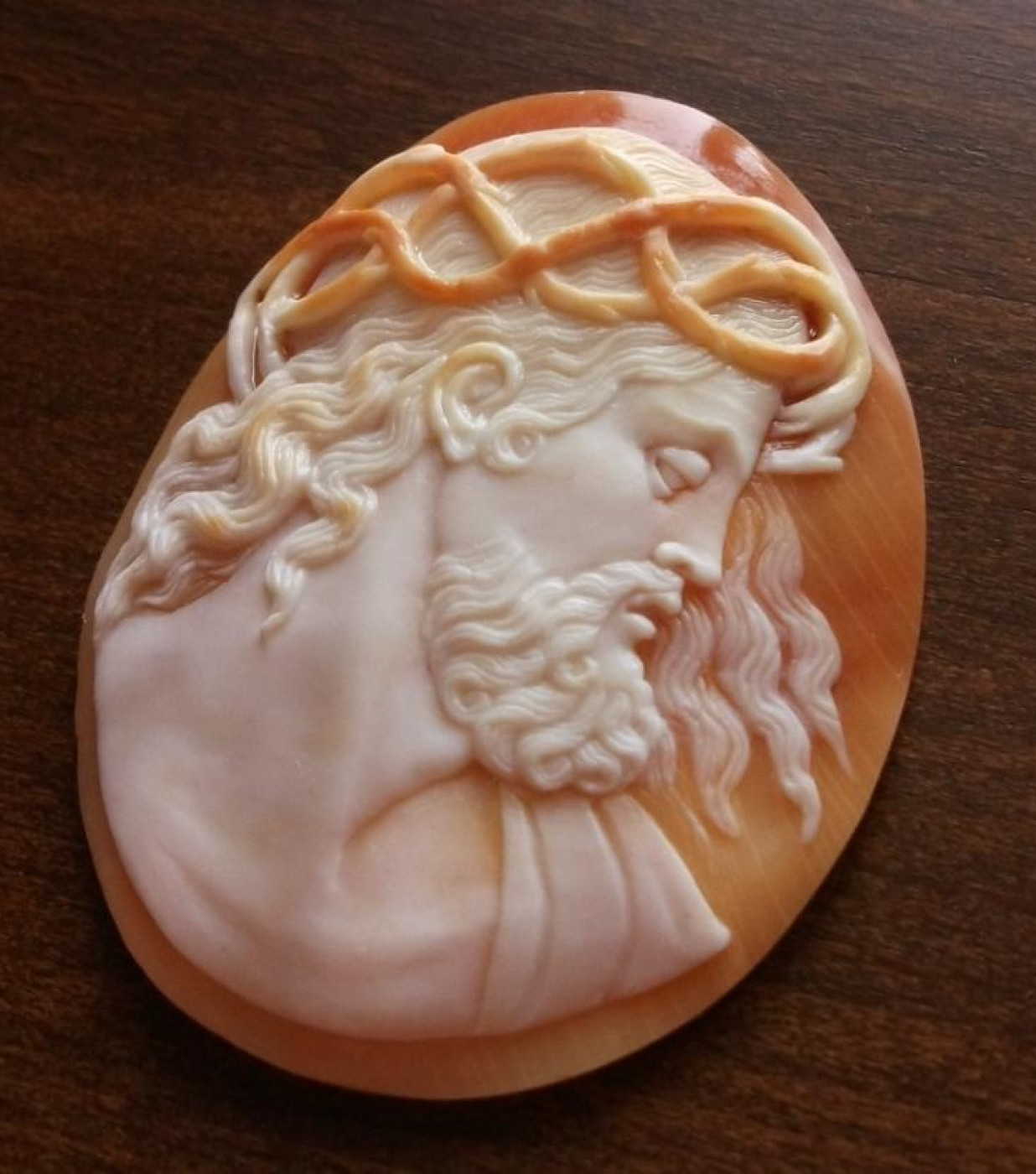 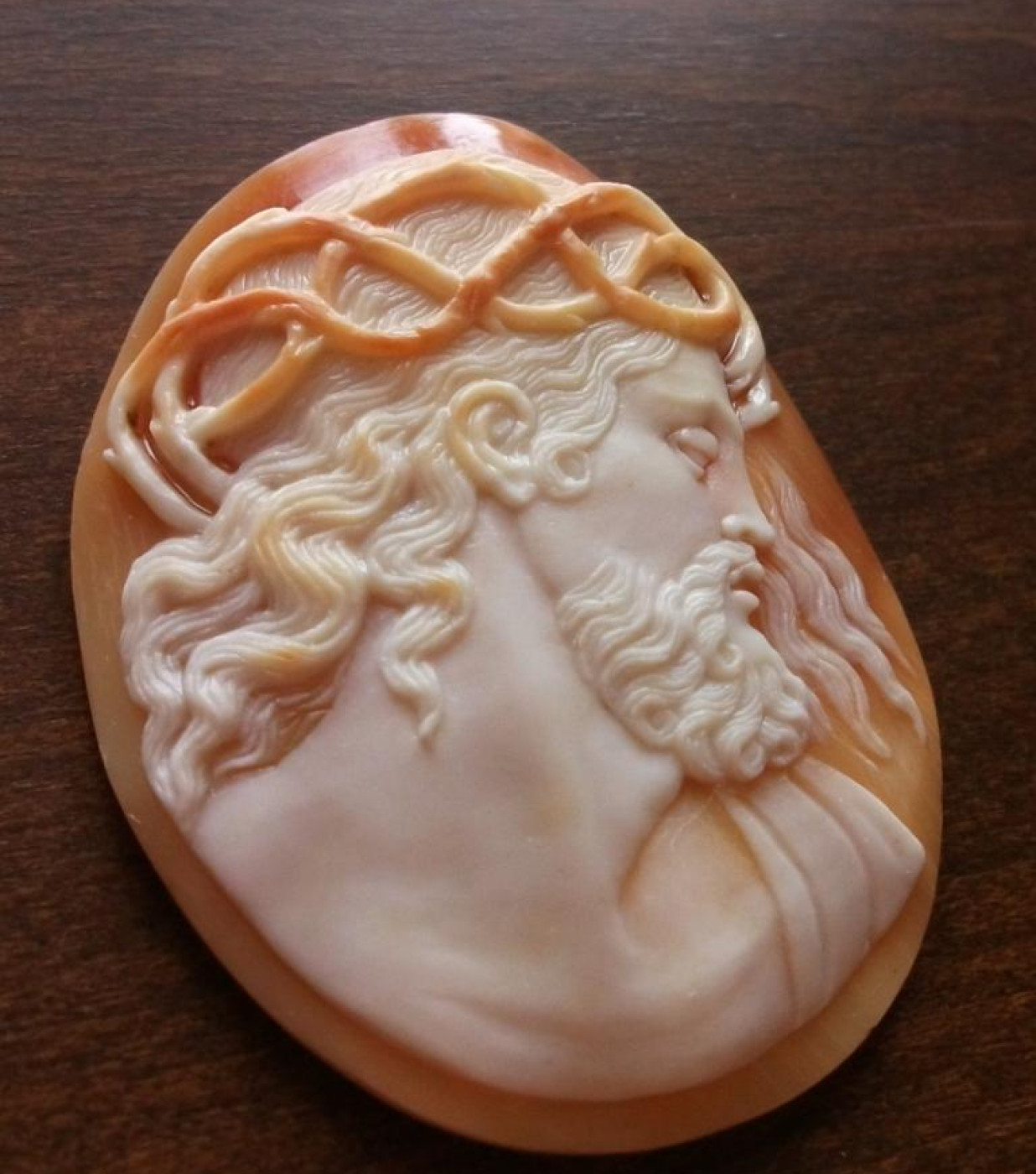 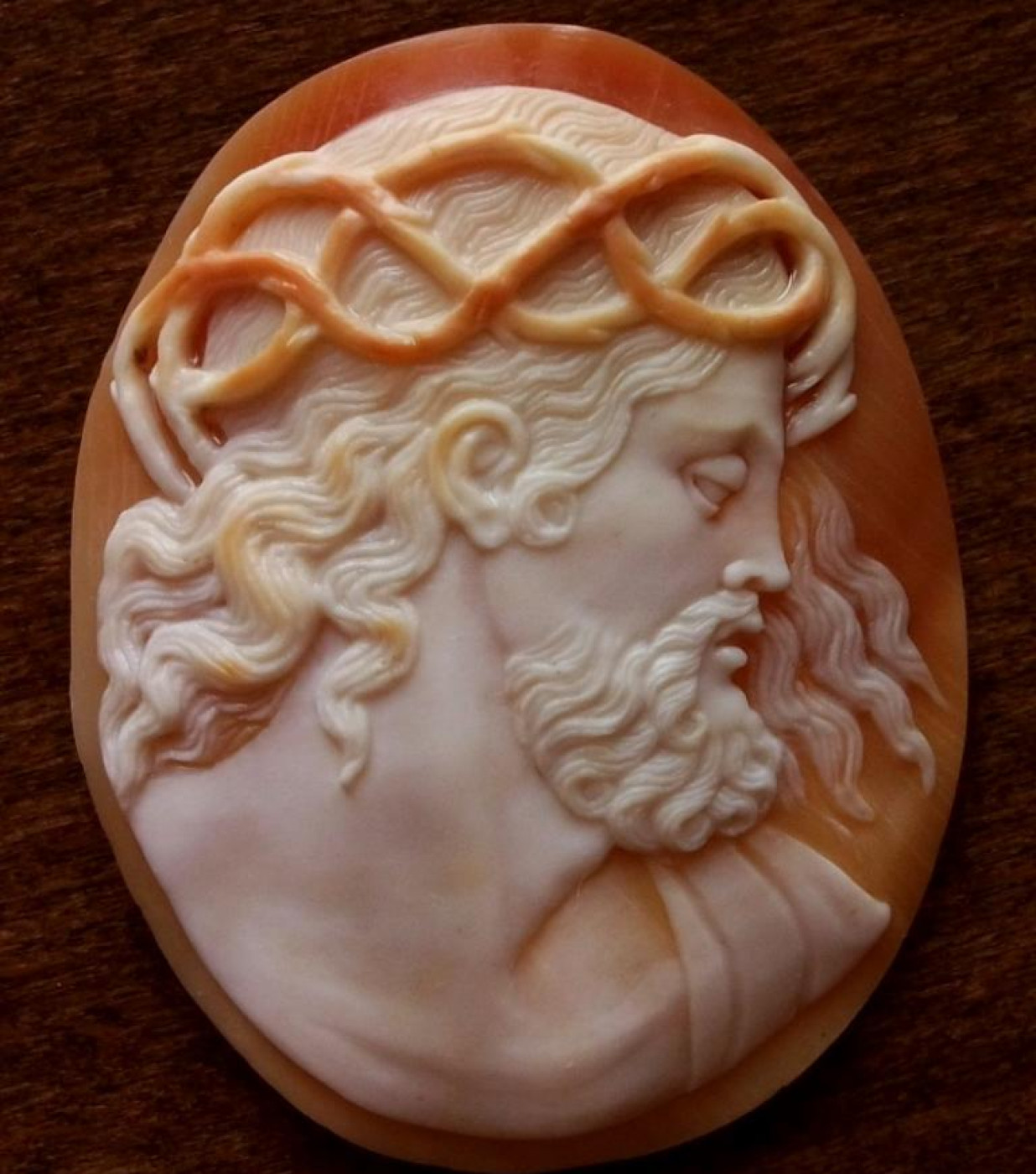 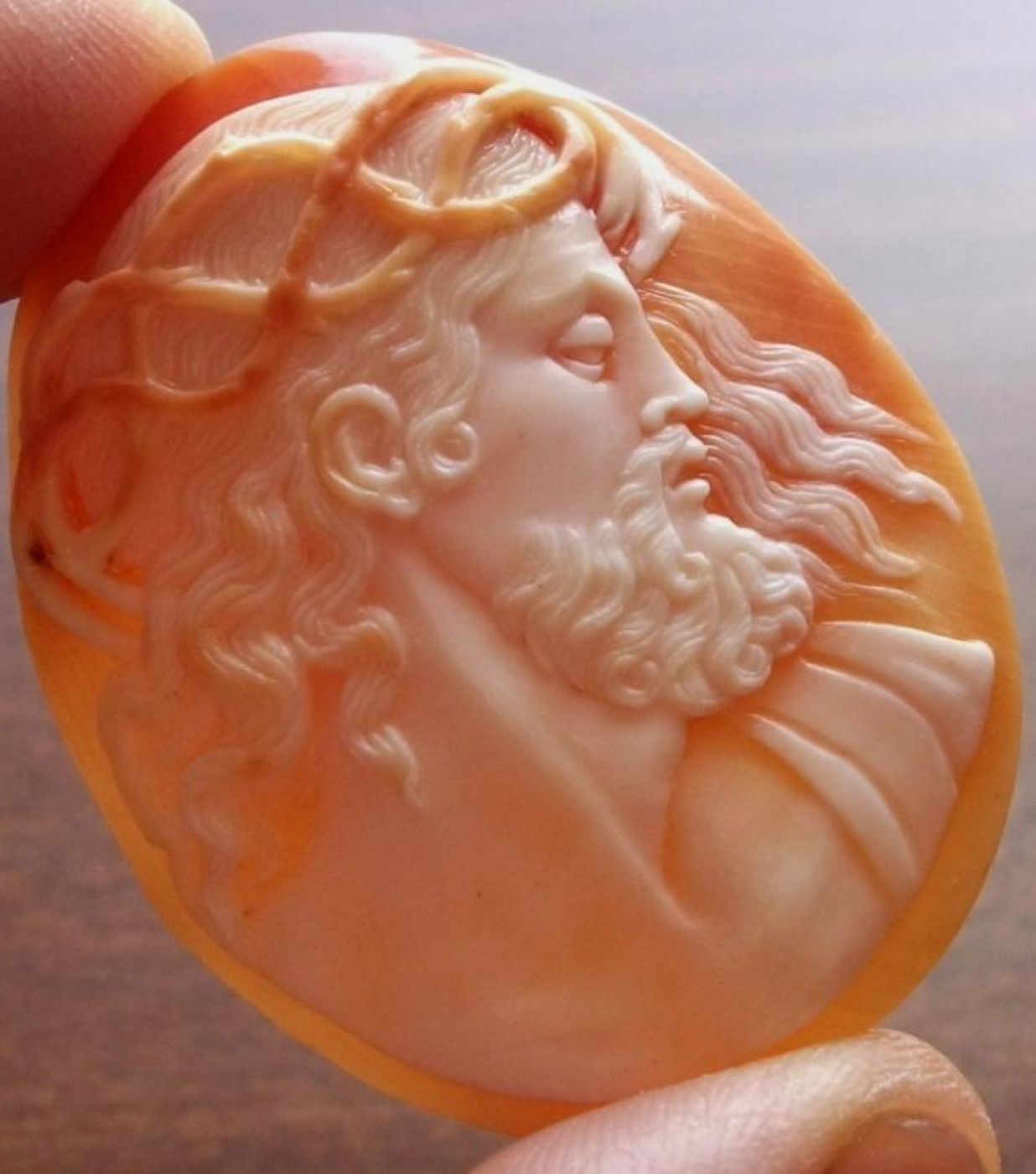 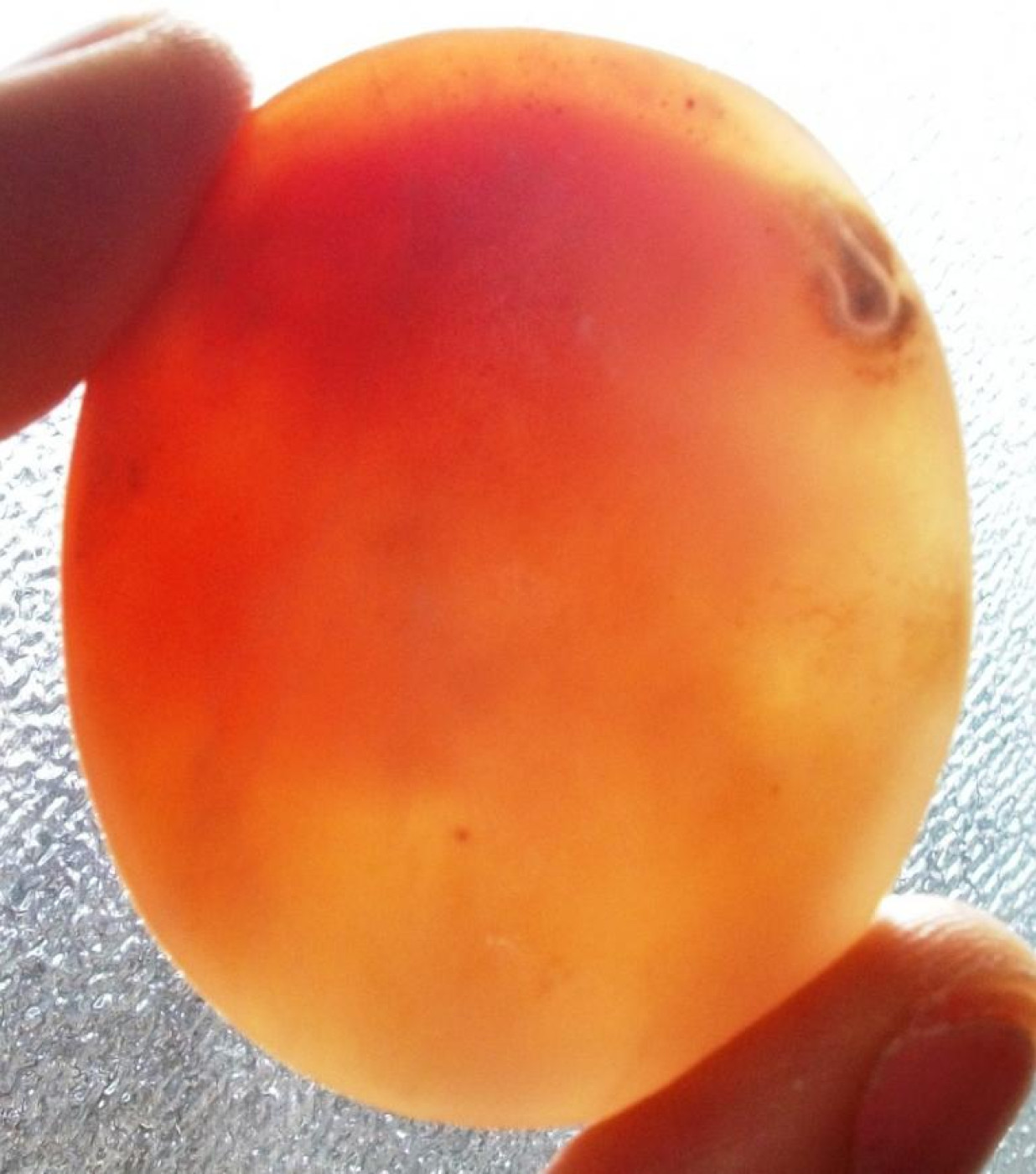 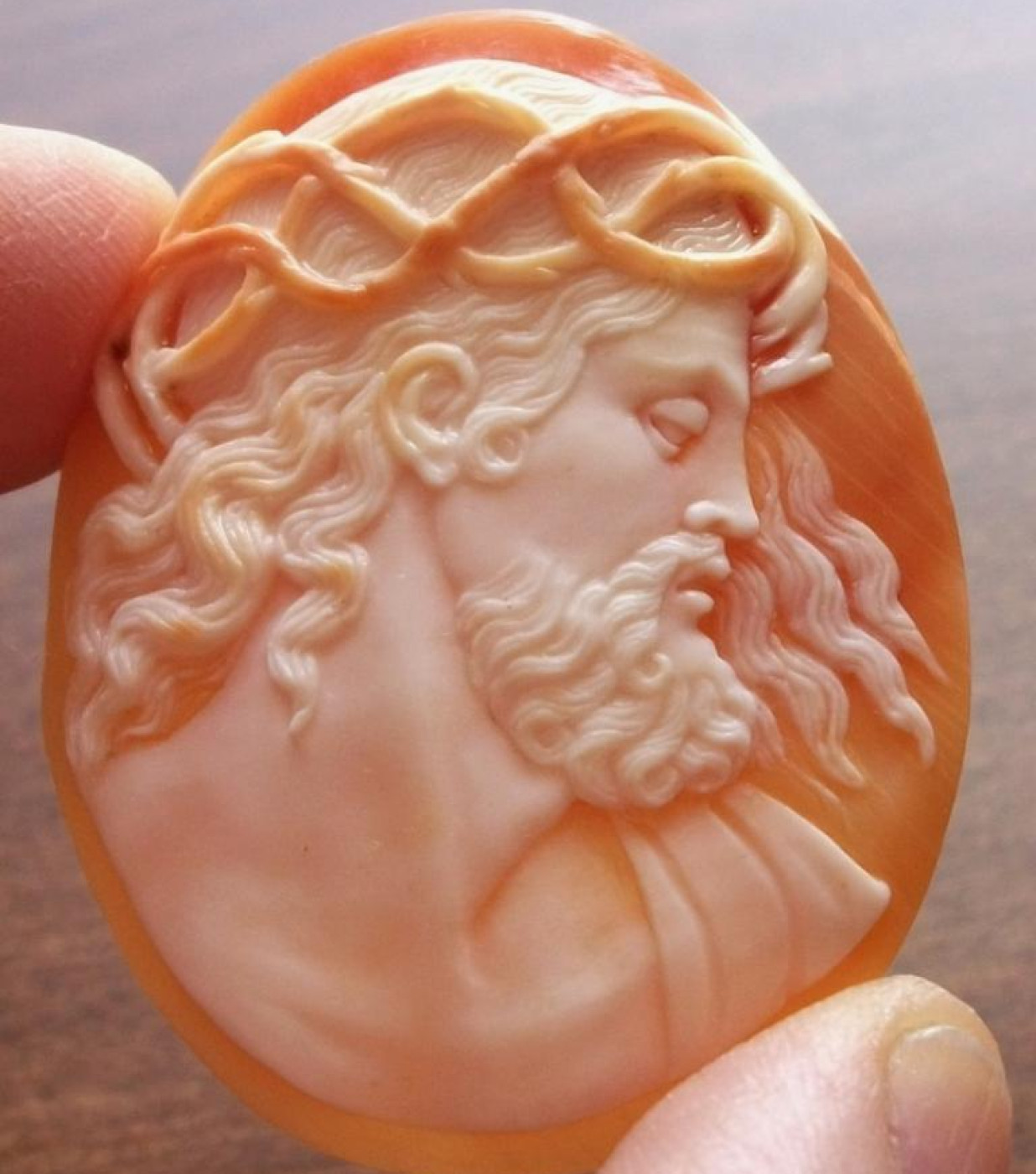 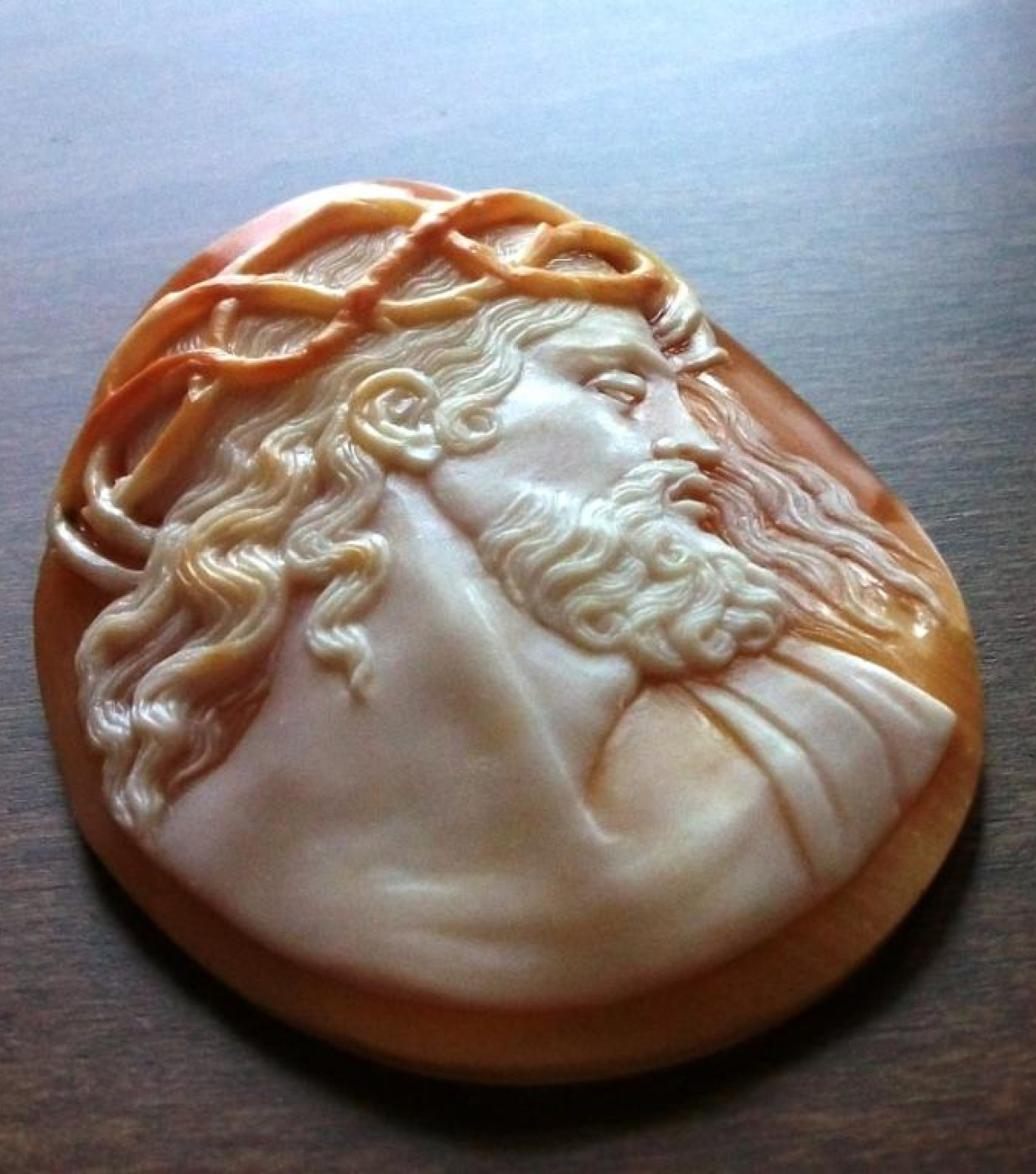 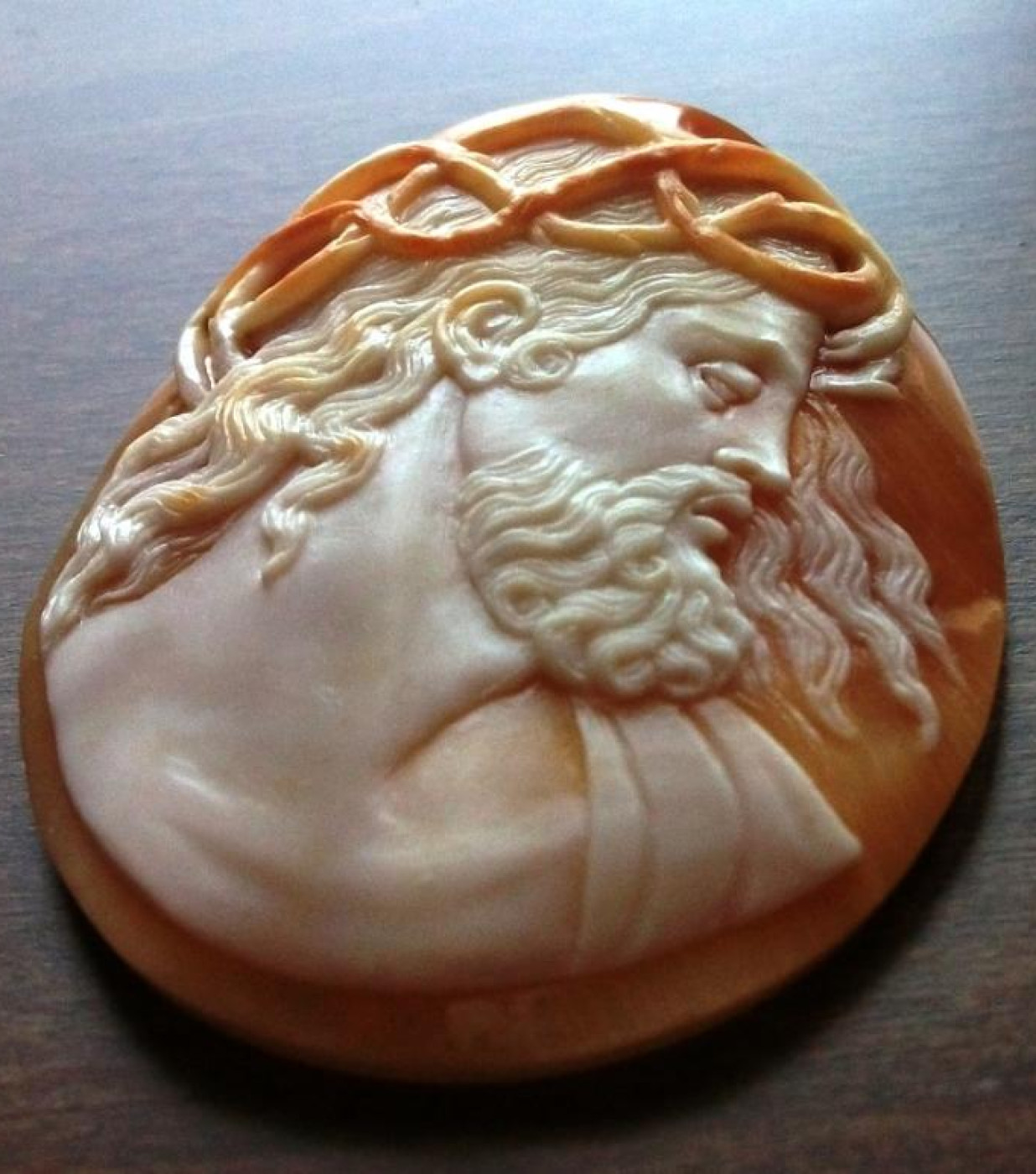 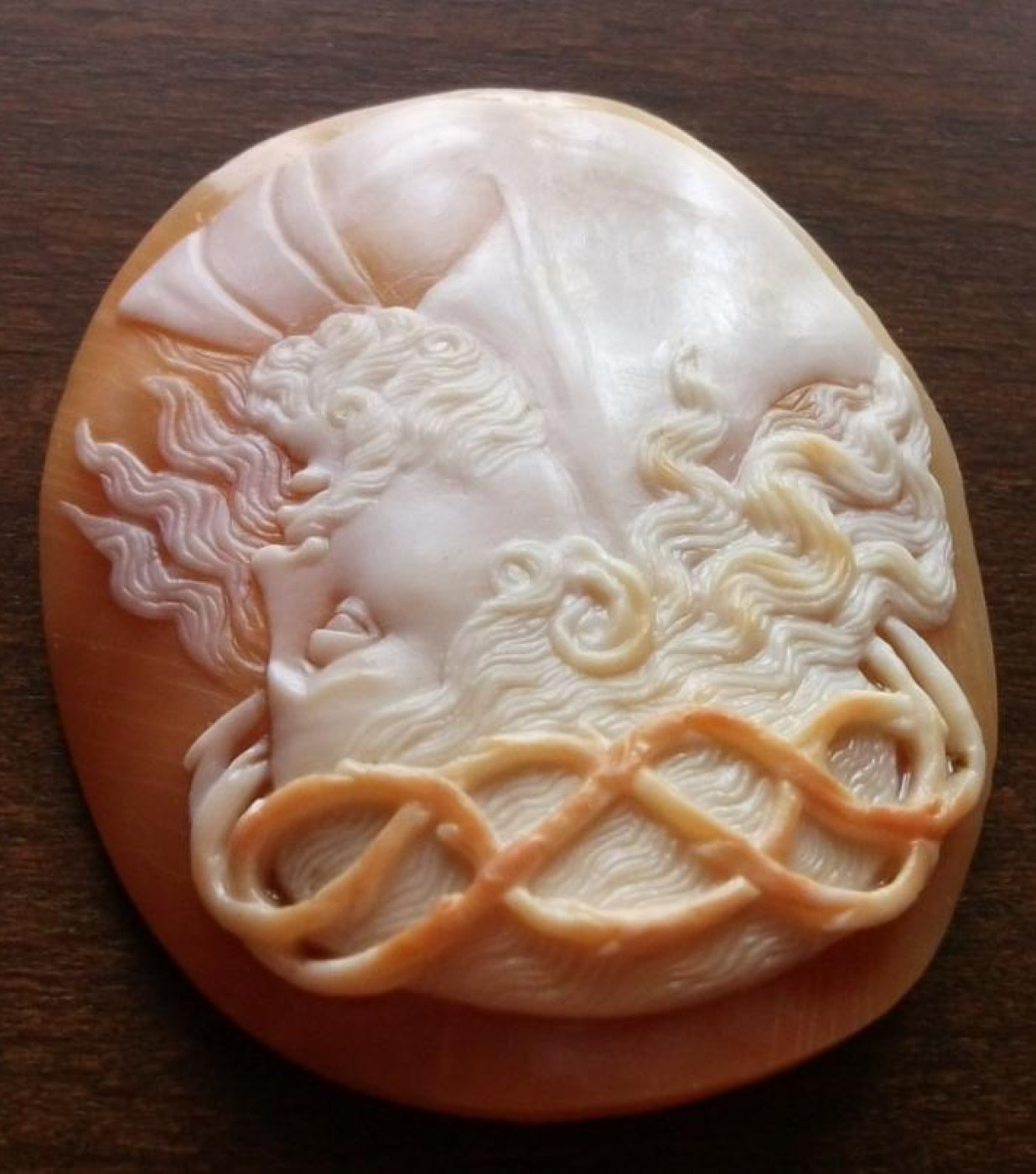 Excellent quality cameo depicting Jesus with a thorns crown on his head. All the details are finely carved, even the pupil of his eye is carved, not very visible in the pictures but it is there. An expression of suffering on his face and his forehead is frown.  Look at the beauty of the facial features, he seems alive. The details of this cameo are exceptional,  Jesus is a quite rare subject in a cameo and I was lucky in finding one of excellent quality. A very lovely cameo to collect.
A bit of History:

Jesus of Nazareth (7 - 2 BC/BCE—26–36 AD/CE) also known as Jesus Christ, is the central figure of Christianity and is revered by most Christian churches as the Son of God and the incarnation of God. The principal sources of information regarding Jesus' life and teachings are the four canonical gospels. The Gospel of Matthew and the Gospel of Luke place Jesus' birth under the reign of Herod the Great, who died in 4 BC/BCE, although the Gospel of Luke also describes the birth as taking place during the first census of the Roman provinces of Syria and Judea in 6 AD/CE. We generally assume a date of birth between 6 and 4 BC/BCE. Due to a fourth century arrangement to offset the pagan Roman Saturnalia festival, the birth of Jesus is celebrated on December 25. Since the thirteenth century, celebration of the Christmas (Christ's Mass) has become an important Christian tradition. The common Western standard for numbering years, in which the current year is 2008, is based on an early medieval attempt to count the years from Jesus' birth. Jesus' ministry followed that of John the Baptist. According to Matthew and Luke, Jesus was born in Bethlehem of Judea to Mary, a virgin, by a miracle of the Holy Spirit. The Gospel of Luke gives an account of the angel Gabriel visiting Mary to tell her that she was chosen to bear the Son of God (Luke 1:26–38). According to Luke, an order of Caesar Augustus had forced Mary and Joseph to leave their homes in Nazareth and come to the home of Joseph's ancestors, the house of David, for the Census of Quirinius. After Jesus' birth, the couple was forced to use a manger in place of a crib because of a shortage of accommodation (Luke 2:1–7). According to Luke, an angel announced Jesus' birth to shepherds who left their flocks to see the newborn child and who subsequently publicized what they had witnessed throughout the area . Matthew tells of the Wise Men or Magi who brought gifts to the infant Jesus after following a star which they believed was a sign that the King of the Jews had been born (Matthew 2:1–12). Jesus' childhood home is identified as the town of Nazareth in Galilee. Except for a journey to Egypt by his family in his infancy to escape Herod's Massacre of the Innocents and a short trip to Tyre and Sidon ( in what is now Lebanon), the Gospels place all other events in Jesus' life in ancient Israel. According to Matthew, the family remained in Egypt until Herod's death, whereupon they returned to Nazareth to avoid living under the authority of Herod's son and successor Archelaus (Matthew 2:19–23). The Gospels name Pontius Pilate as the Roman prefect who had Jesus crucified, and Pilate was prefect of Judea between 26 and 36 AD/CE. According to Matthew, Mark and Luke, Jesus was executed after Passover (a Jewish holiday occurring in northern spring) but according to John he was executed earlier in the day of preparation for the Passover. Most Christians commemorate Jesus' crucifixion on  Good Friday and celebrate his resurrection on Easter Sunday.  Christian views of Jesus center on the belief that Jesus is divine, is the Messiah whose coming was prophesied in the Old Testament, and that he was resurrected after his crucifixion. Christians predominantly believe that Jesus is the Son of God; (generally meaning that he is God the Son, the second person in the Trinity), who came to provide salvation and reconciliation with God by his death for their sins.