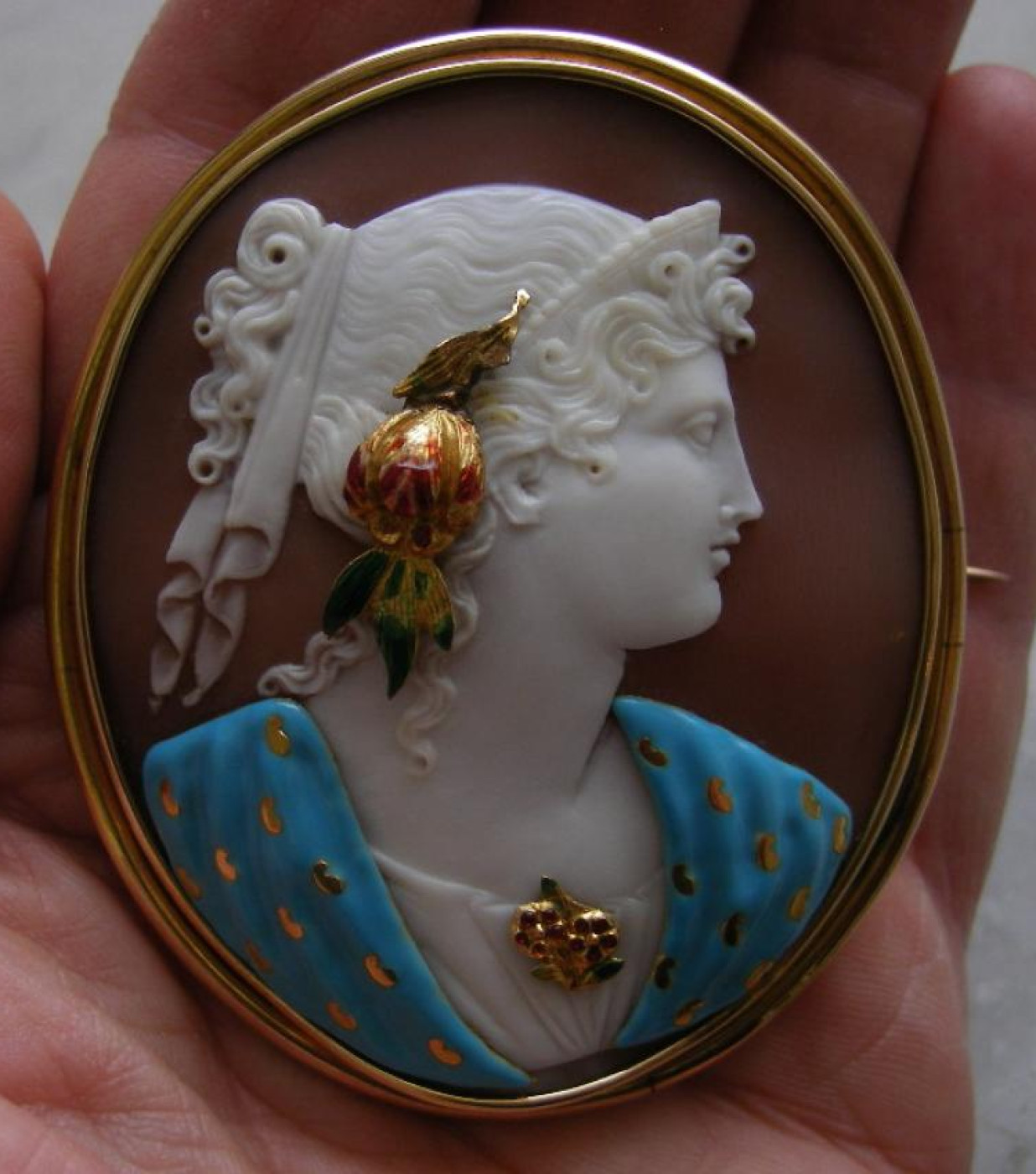 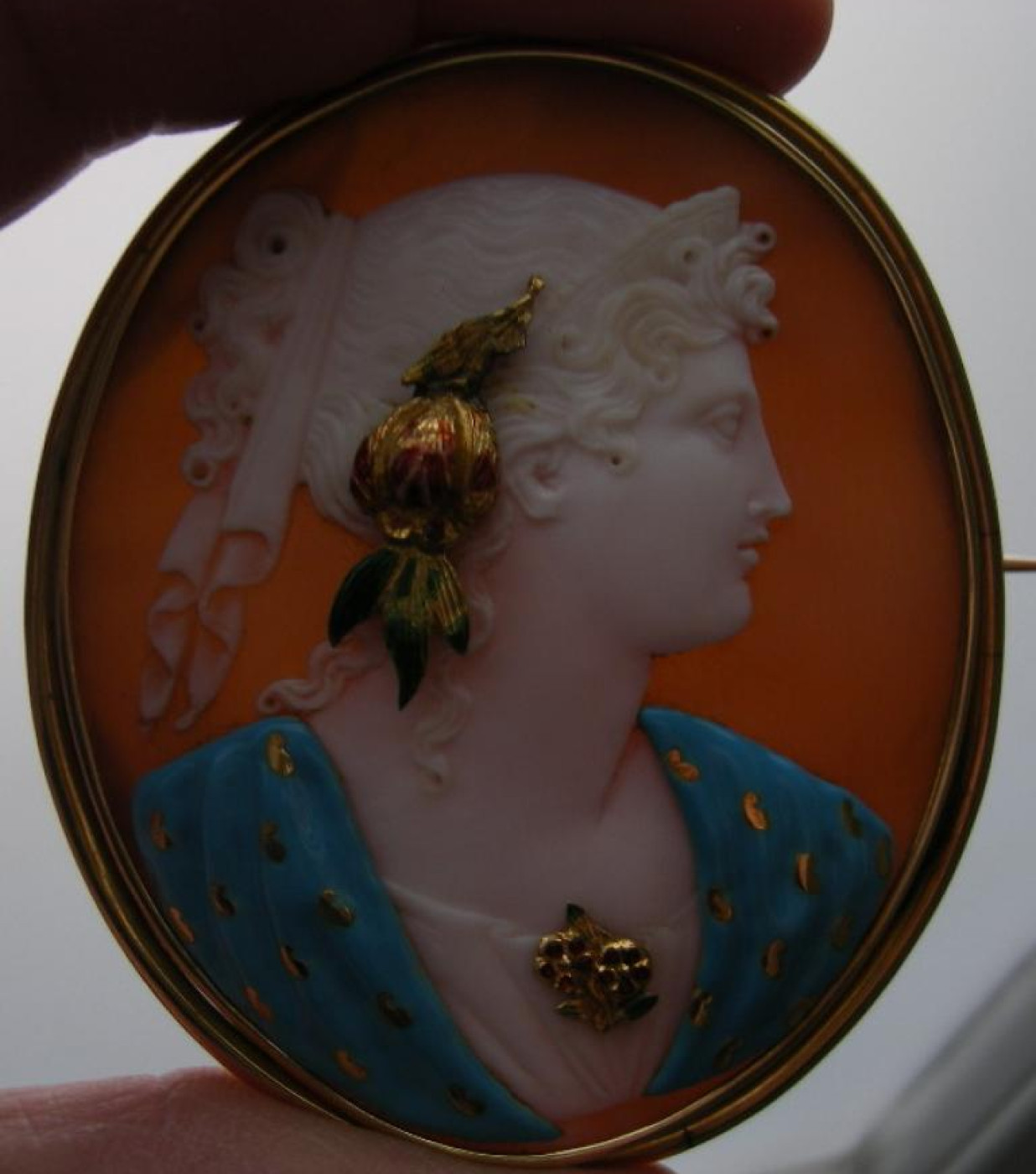 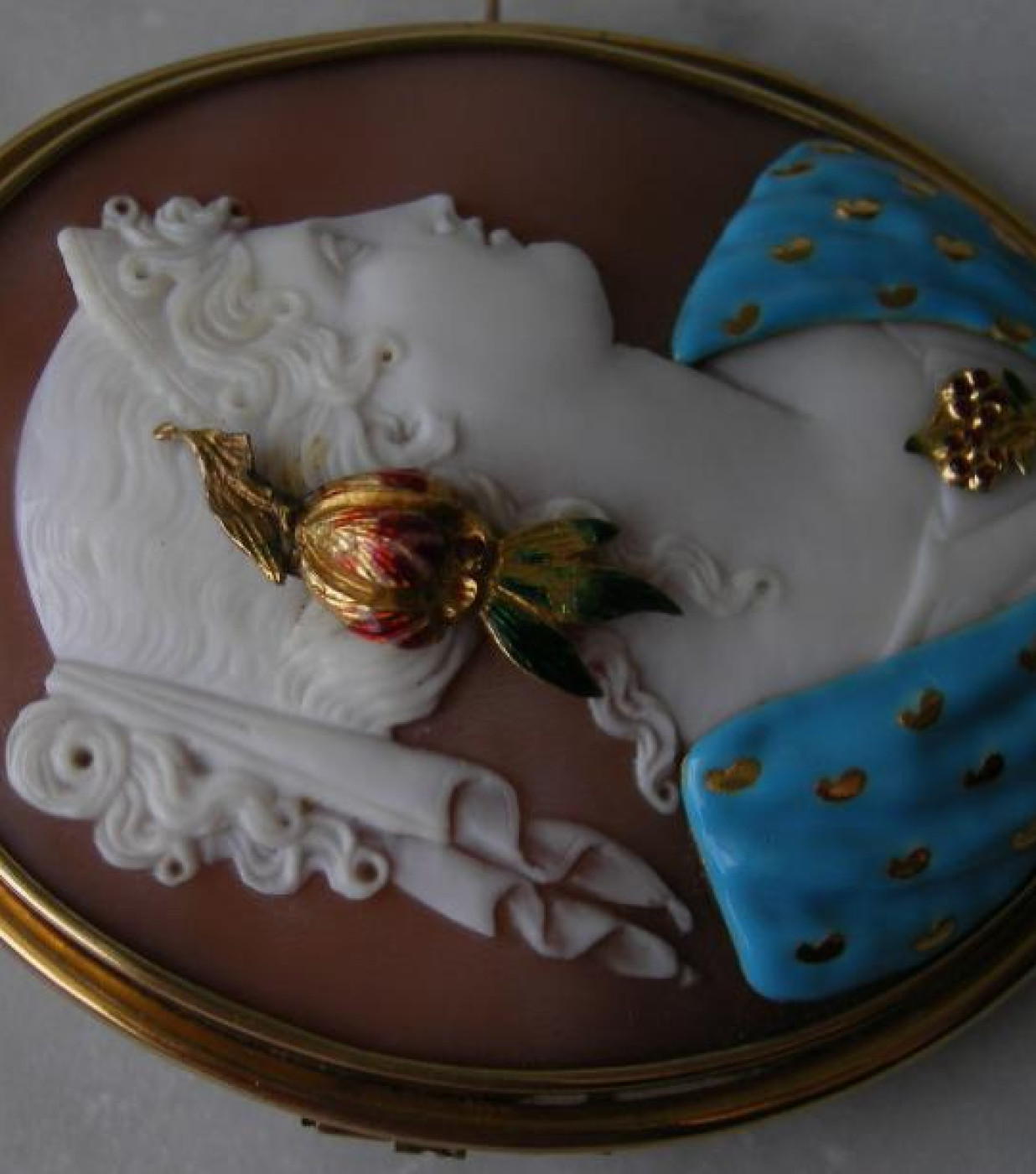 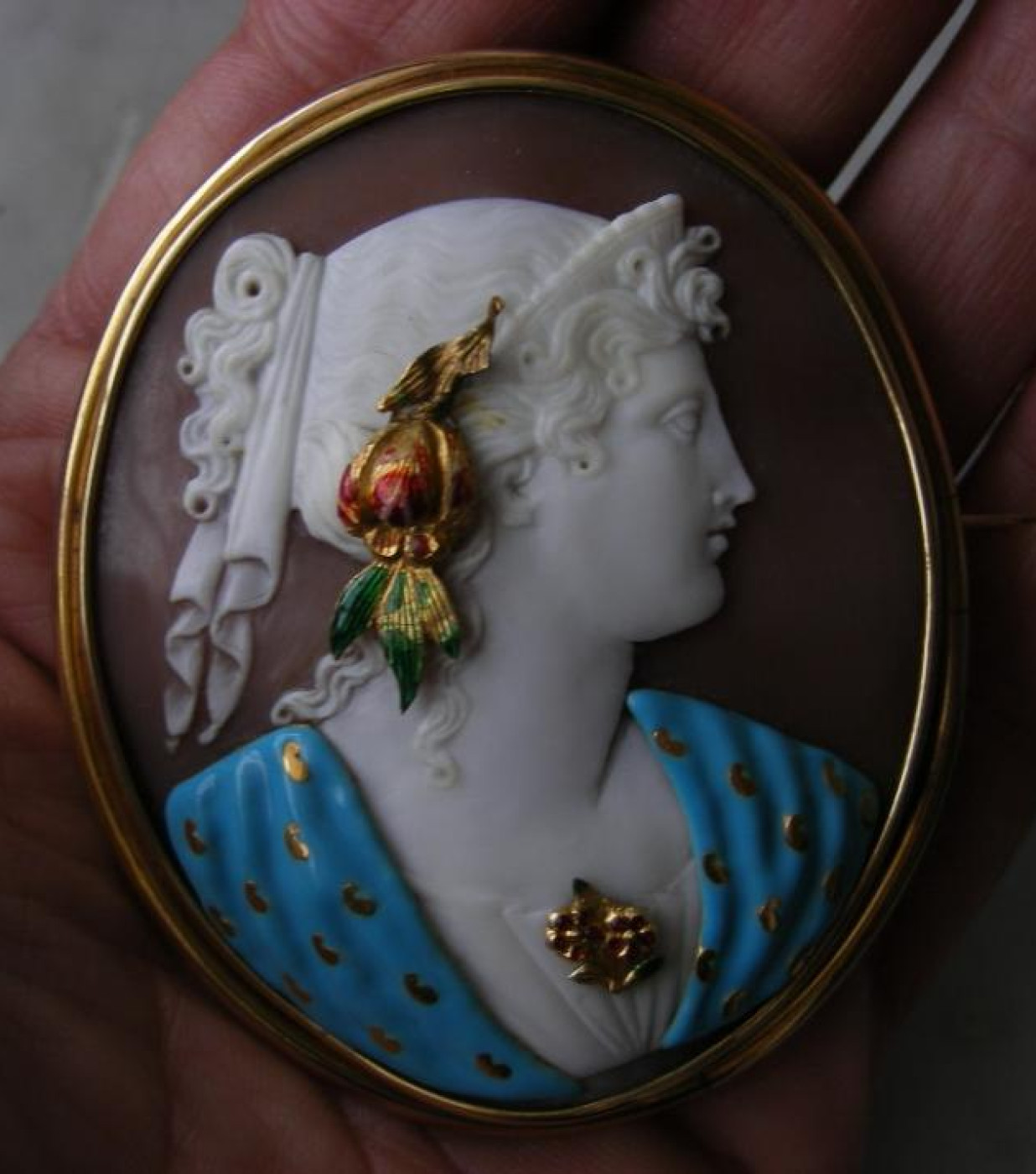 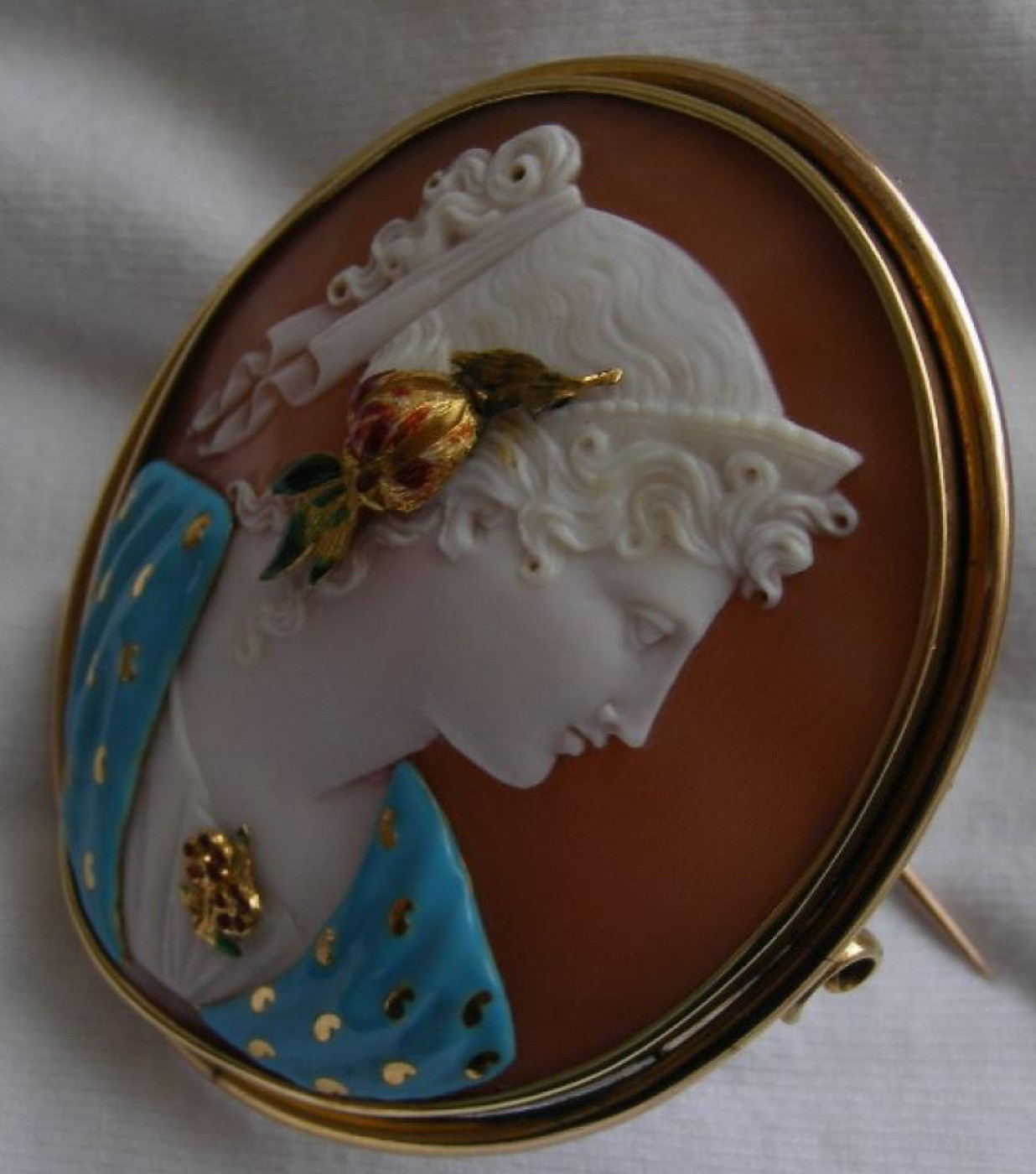 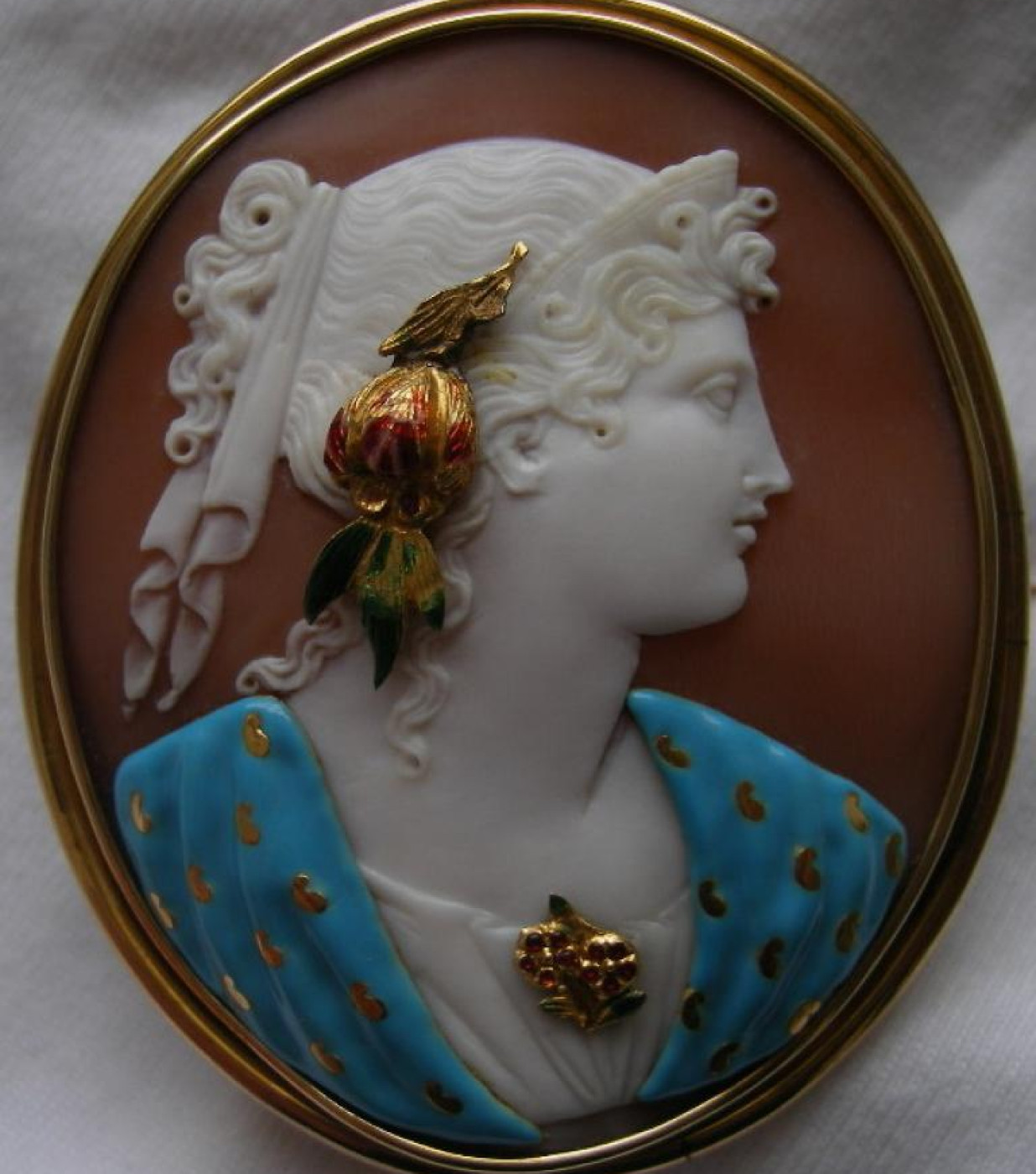 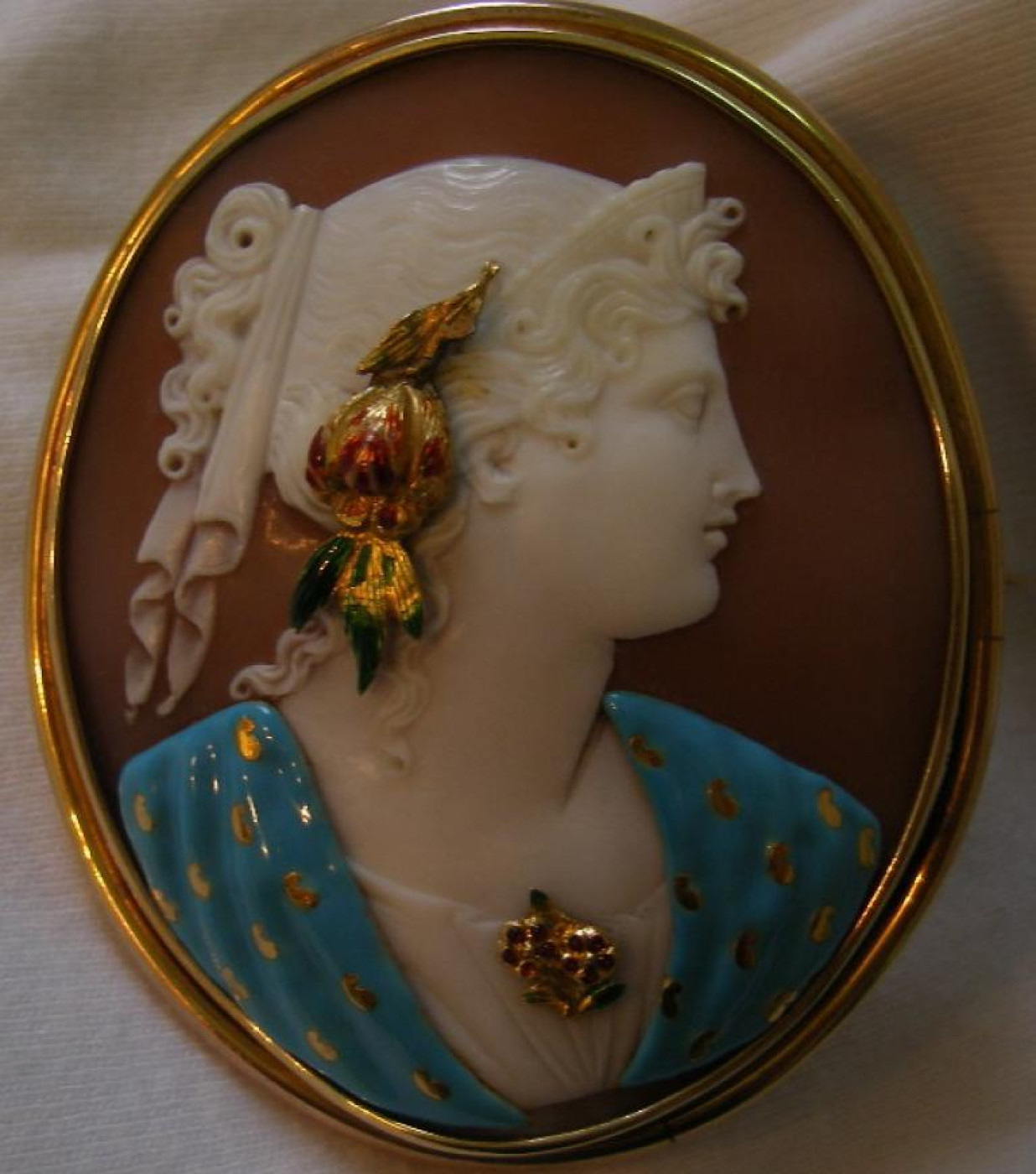 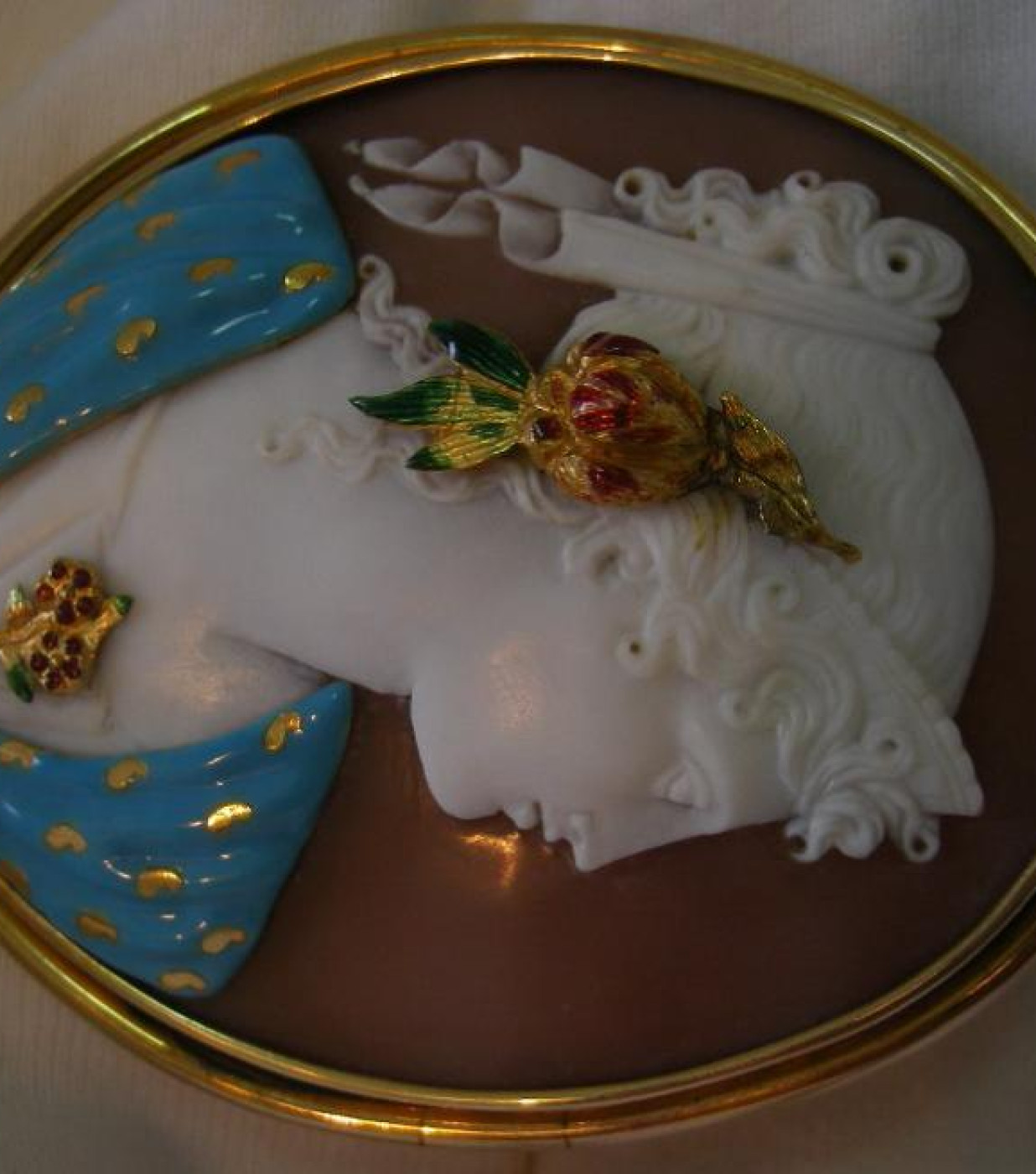 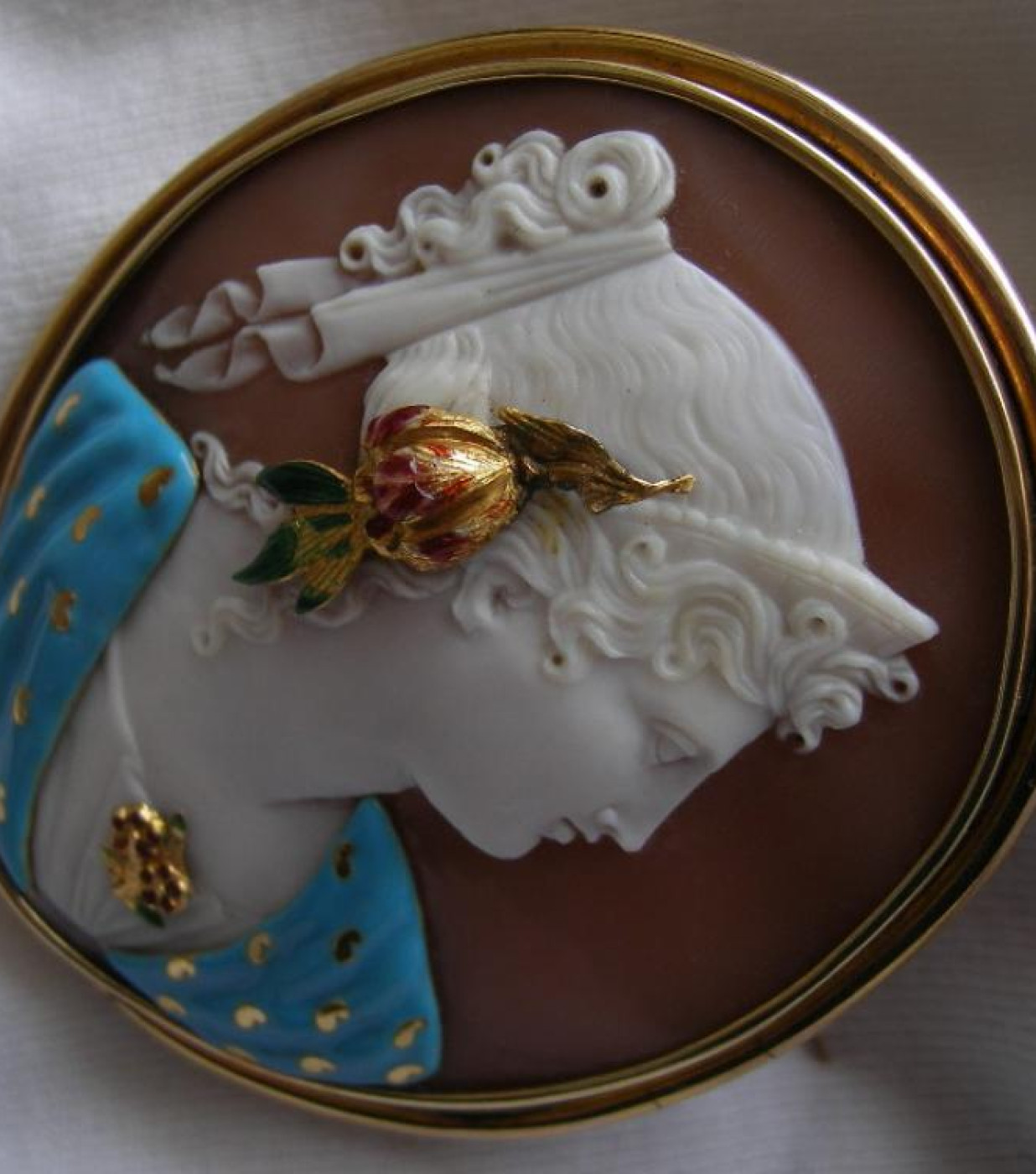 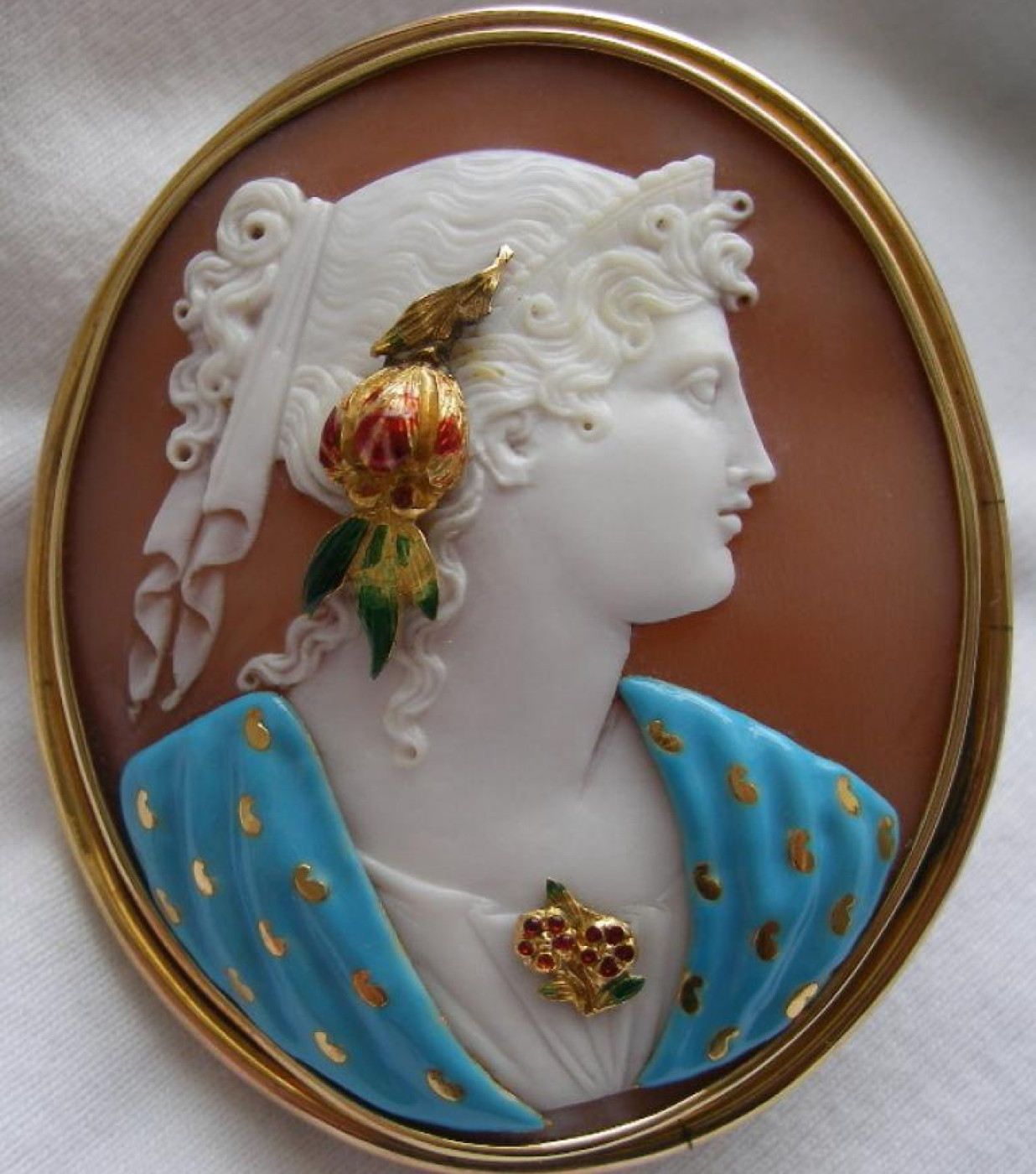 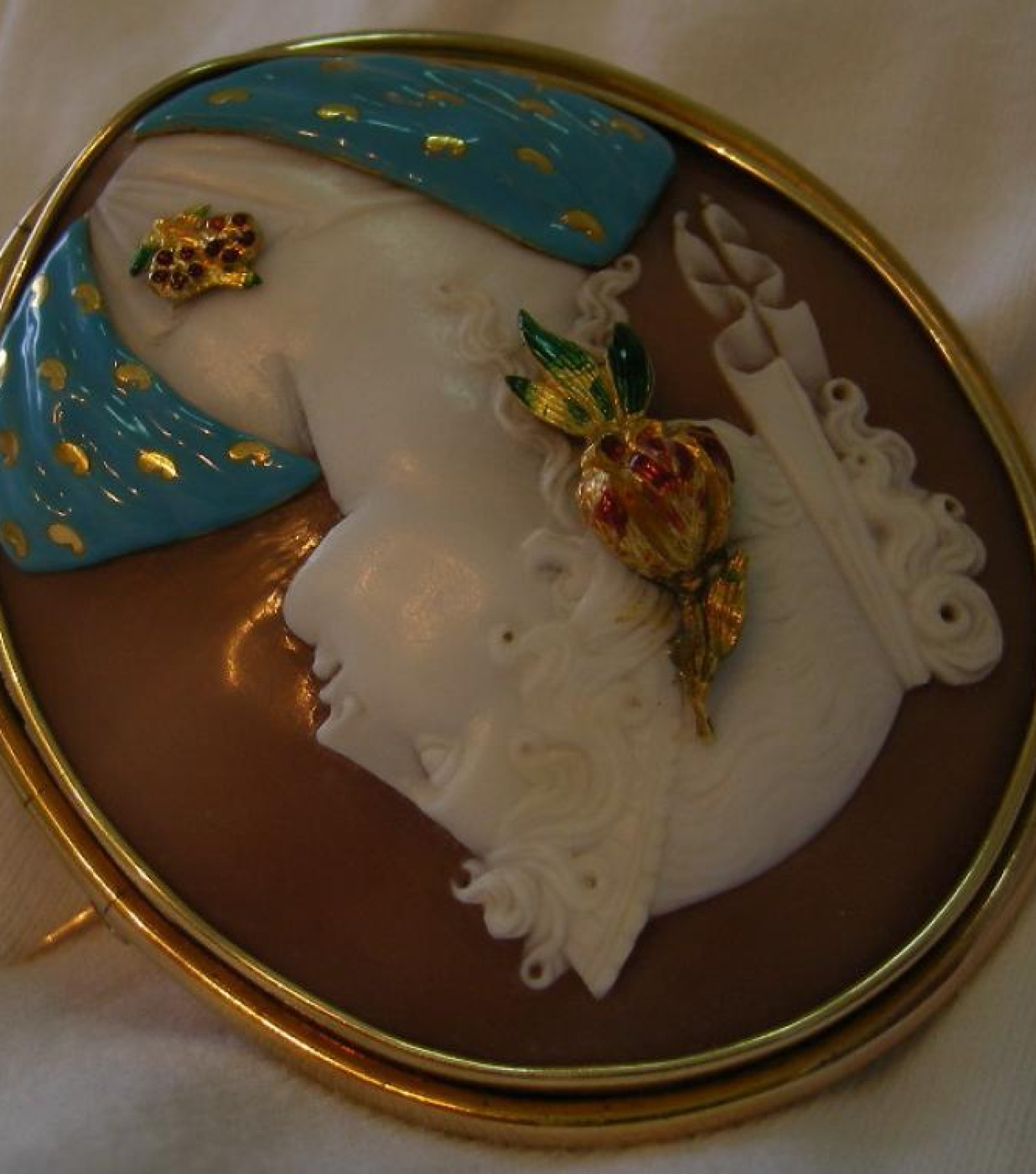 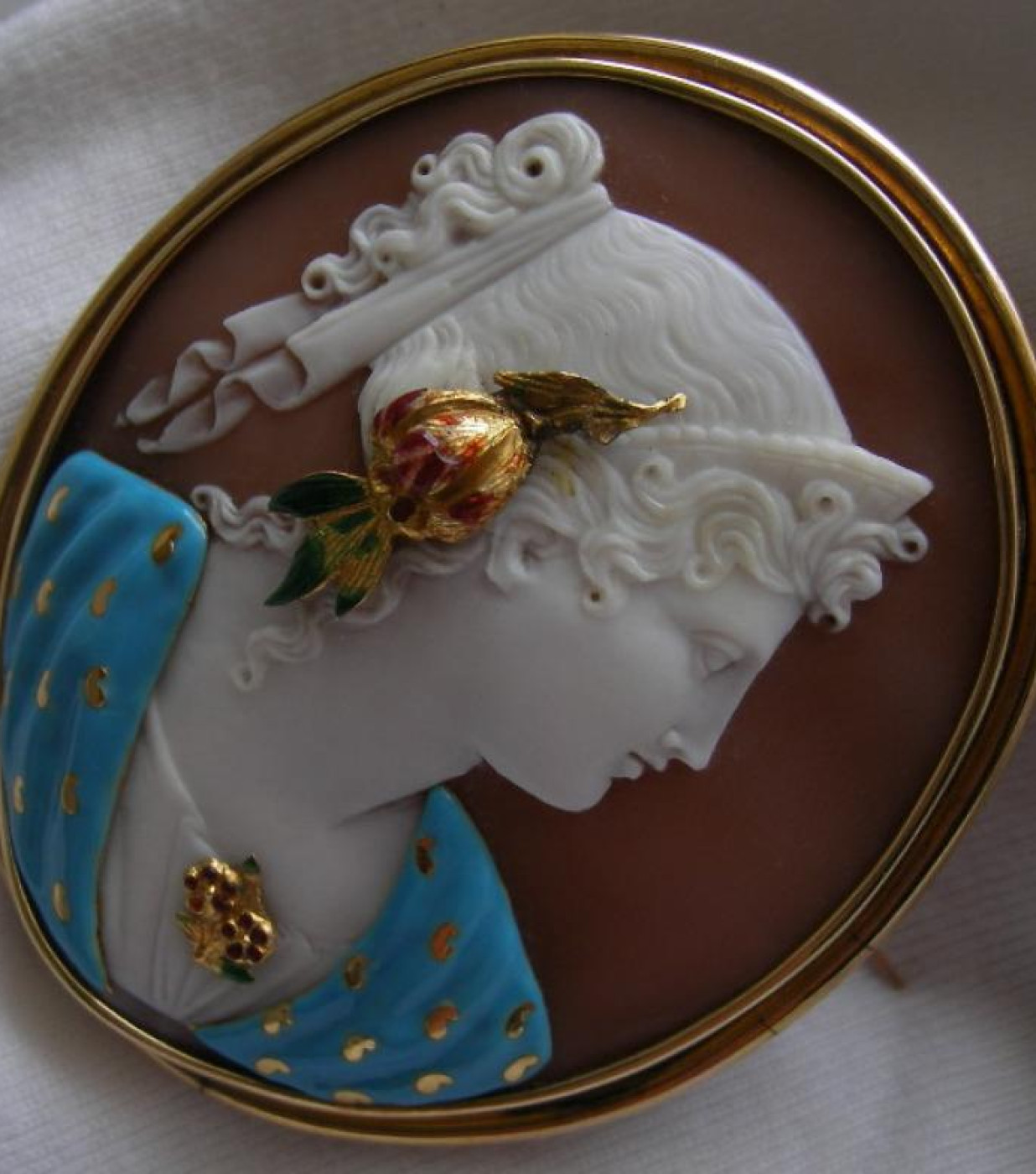 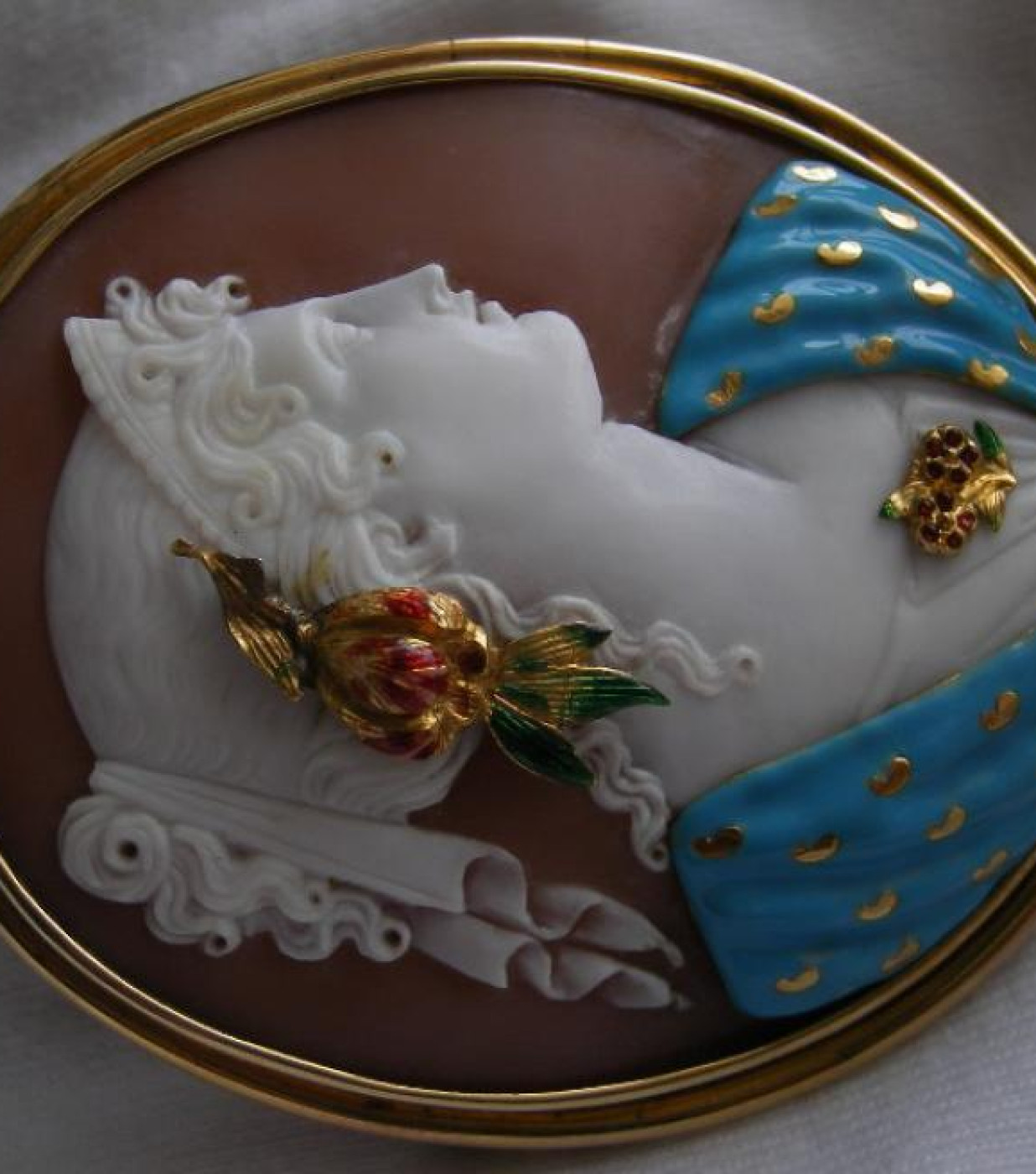 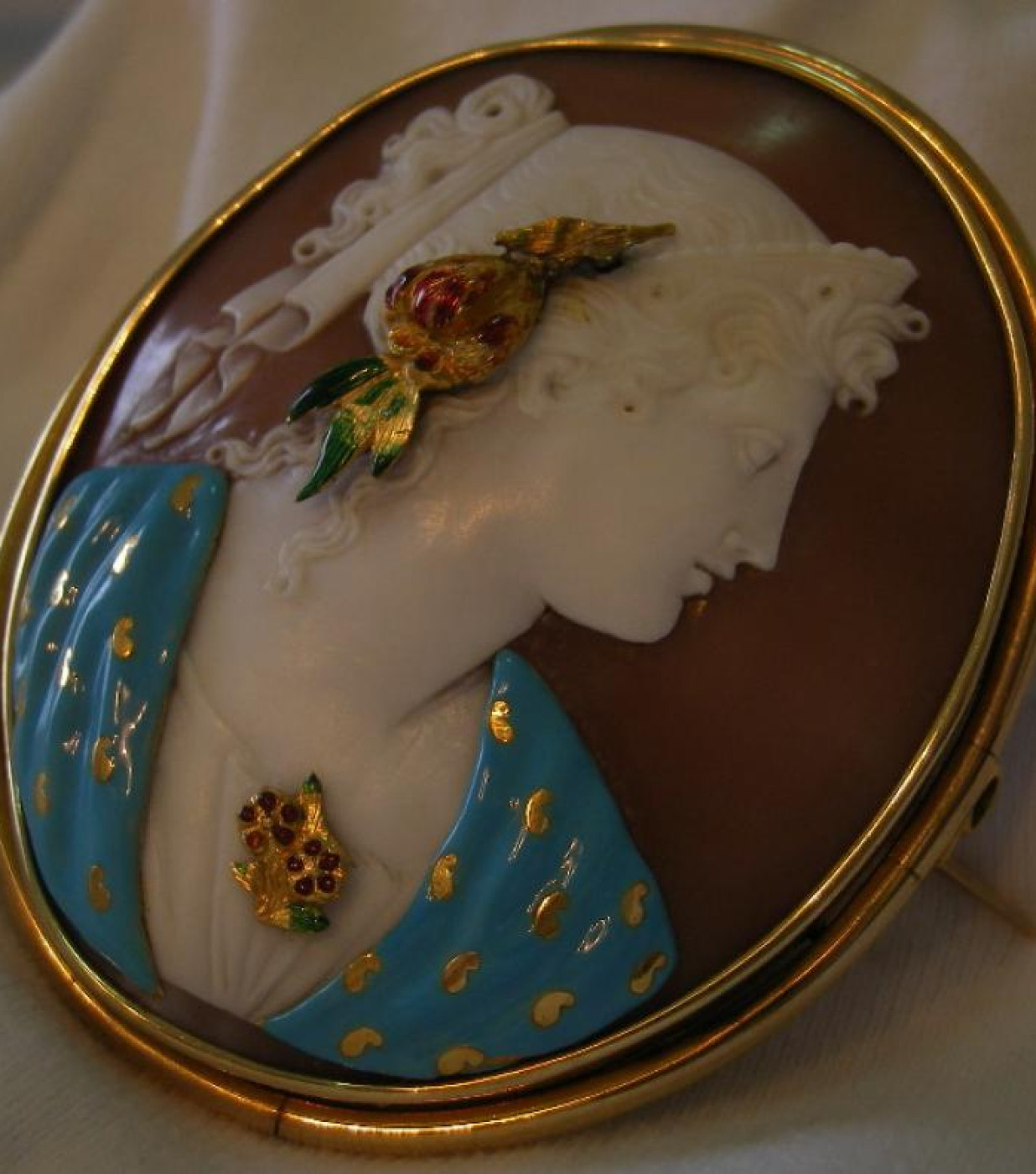 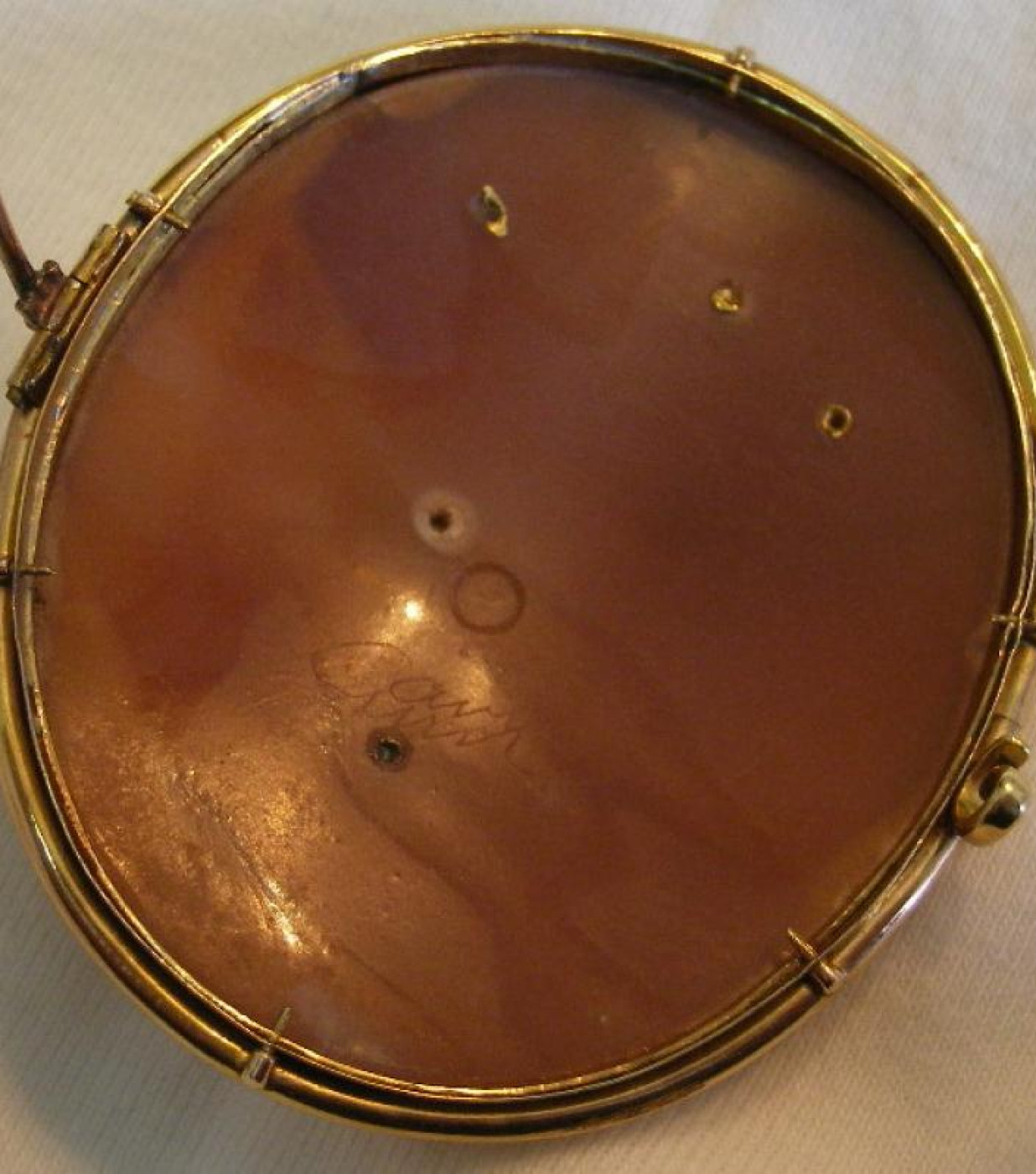 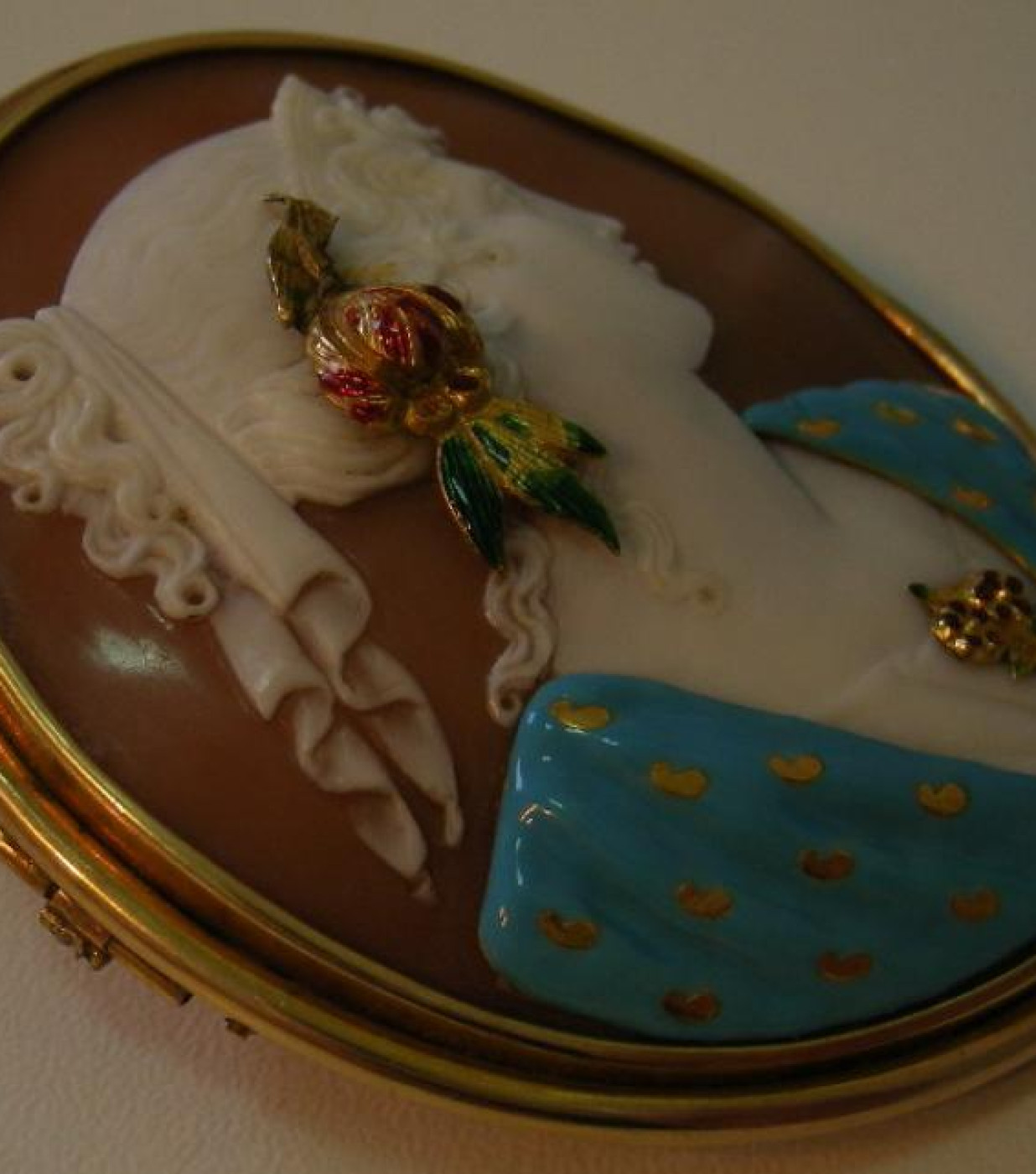 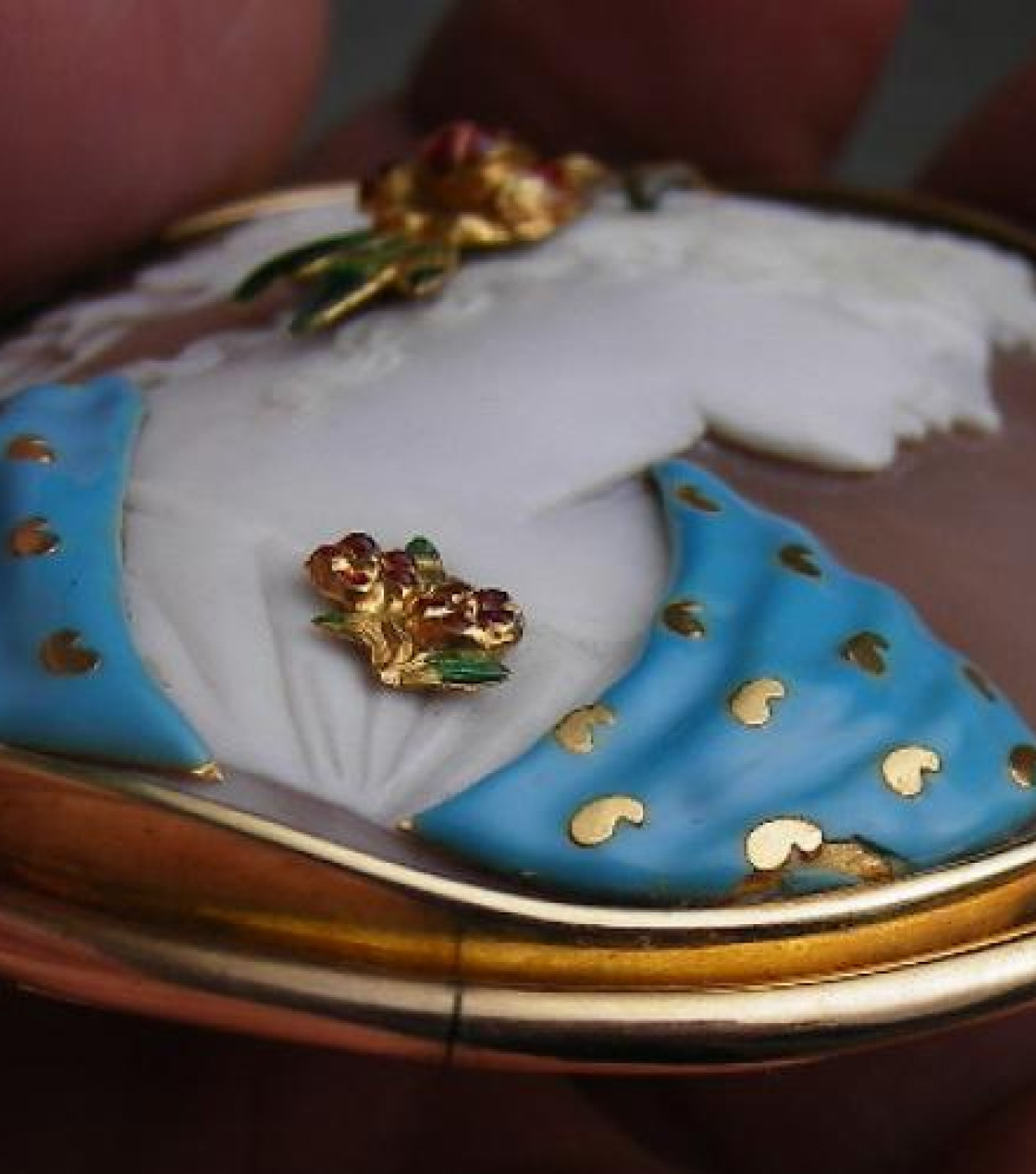 Rarest museum quality shell cameo of Hera (Juno for the Romans) the queen of Gods and wife of Zeus. It is very large 2 5/8" by 2 2/8", this kind of cameo is called "commesso" (there is no translation, even in  English  it is called so) which is a technique which started in late sixteenth century Florence. This technique consisted in applying  some enamelled gold, or other precious stones on the shell to form a dress, a crown, a jewel and so on, Those decorations were fixed on the back, through a gold wire, in a hole in the shell.  The "commesso" cameos one must not be confused with the "habille" cameos that only mount a necklace or a diamond into the shell and were typical of the art deco period. These kind of cameos are very very rare, in fact in 10 years of trade I have found only two. The era of this one dates back to circa 1840. Hera wears a turquoise enamel dress with gold accents, has a pomegranate gold flower with red and green enamel in her hair and a shaped flower brooch made of gold and red and green enamel. the frame is 15 gold tested. The shell is in perfect condition, no lines or chips. The gold flowers have lost a little of enamel, and there is a small part of the top flower leaf lost. The blue dress has a minimal enamel loss (see the picture before of the last) not noticeable by a naked eye, you can see it only under a loupe. On the carving there is a tiniest defect, just where the neck touches the head, I have examined it under my loupe and I cannot say if it is a chip, it is too much small even for the loupe, this one too is not noticeable by naked eye. On the frame there is like a scratch as someone wanted to cut it for some reason, but it is only a scratch as I don't feel anything under my finger nail. The cameo is signed on the back, even if I can't decipher who is the carver. The holes that you can see on back were made to hold the gold enamelled decorations, there are two which hold the enamelled dress, another one who holds the brooch, again on the back top there are other two which hold the flower in her head. Just in the center  you can see a circle just scratched almost in correspondence of Hera's ear. Probably, but I'm almost sure,  the carver was intentioned to put an earring but then for some reason he changed his mind and for this probably the ear's lobe was not totally and perfectly carved because it had to be covered by the earring, so it remained a bit shortened in the last part of the lobe. Again inside the ear I see as someone tried to make an hole (just corresponding with scratched circle on the back), and as can be seen clearly from the pictures. I think that he (or the one who commissioned the cameo) noticed that the earring was too much close to the flower and decided at the last to leave the cameo with no earring. After the changing of mind on putting the earring, he, of course, could not more make the lobe longer. This is what I suppose.  I have inspected it under two different loupes and I don't see any chip on the ear, only a bit approximate carving, due to the fact that probably it had to be covered with an earring. Anyway I repeat it is not visible by a naked eye, only under a loupe. This is a more than museum quality cameo, rarest and desirable collector's piece.
A bit of history:
In Greek mythology Era or Hera (Juno for the Romans) was the wife of Zeus, and so the Queen of Gods. Faithful and jealous wife. She was the Goddess of the wedding and protector of the married women and of the birth and her constant fight against the infidelity of Zeus gave origin to the recurring theme of the "Hera's jealousy". Hera gave birth to Ares (God of War), Hephaestus (God of Fire), Hebe (Goddess of Youth) and Eileithyia (Goddess of the birth). Hera, jealous wife, often persecuted lovers and sons of Zeus. She never forgot an offence and was well known per her revengeful nature. Being angry with the Trojan prince Paris who preferred Aphrodite (Venus), Goddess of Love, to her, in a beauty contest, Hera helped the Greeks in the War of Troy and was satisfied only when the city was finally destroyed. The corresponding figure in Roman mythology was Juno. Her sacred symbols were the cow and the peacock. Hera was portrayed as a solemn and majestic figure, often sat on a throne while wears as crown the "Polos", a typical head gear of a cylindrical shape worn by the most important Mother Goddesses of several antique cultures. She held a pomegranate in her hand, symbol of fertility and death. The temples dedicated to her date back to 7th century B.C. and they were the earliest historical examples of Monumental Greek Temples, the "Heraion" in the island of Samo and the "Heraion" of Argo.