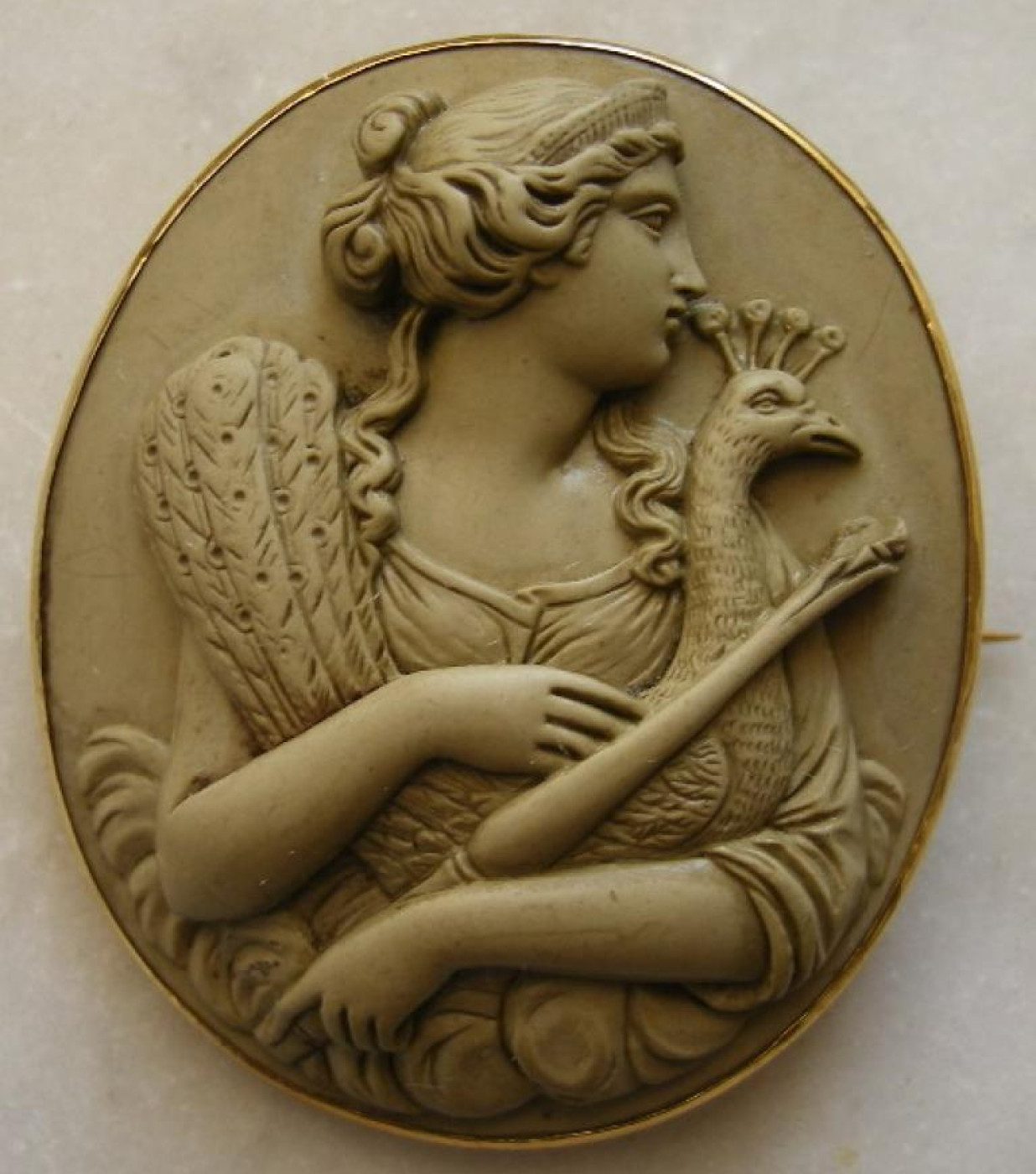 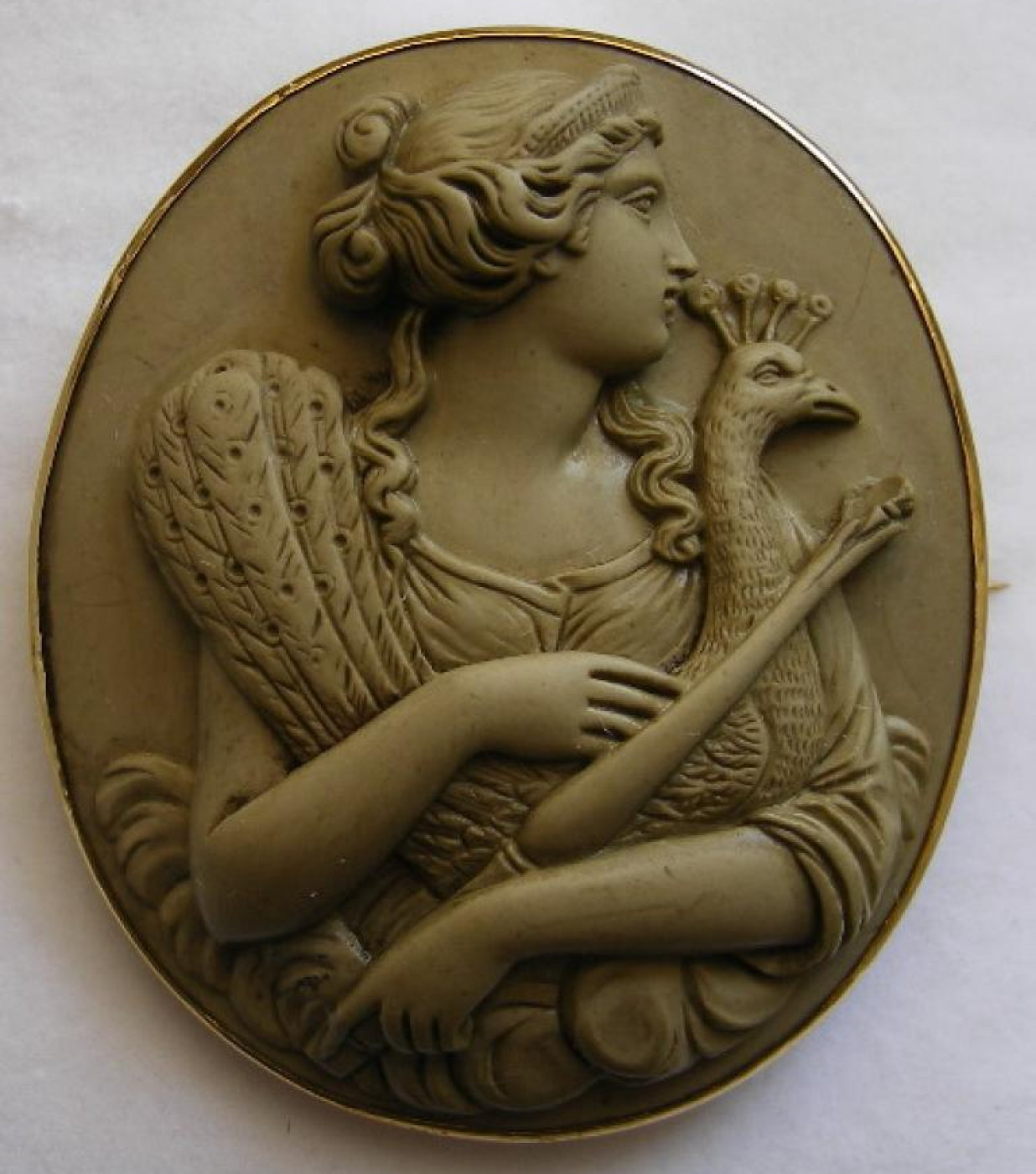 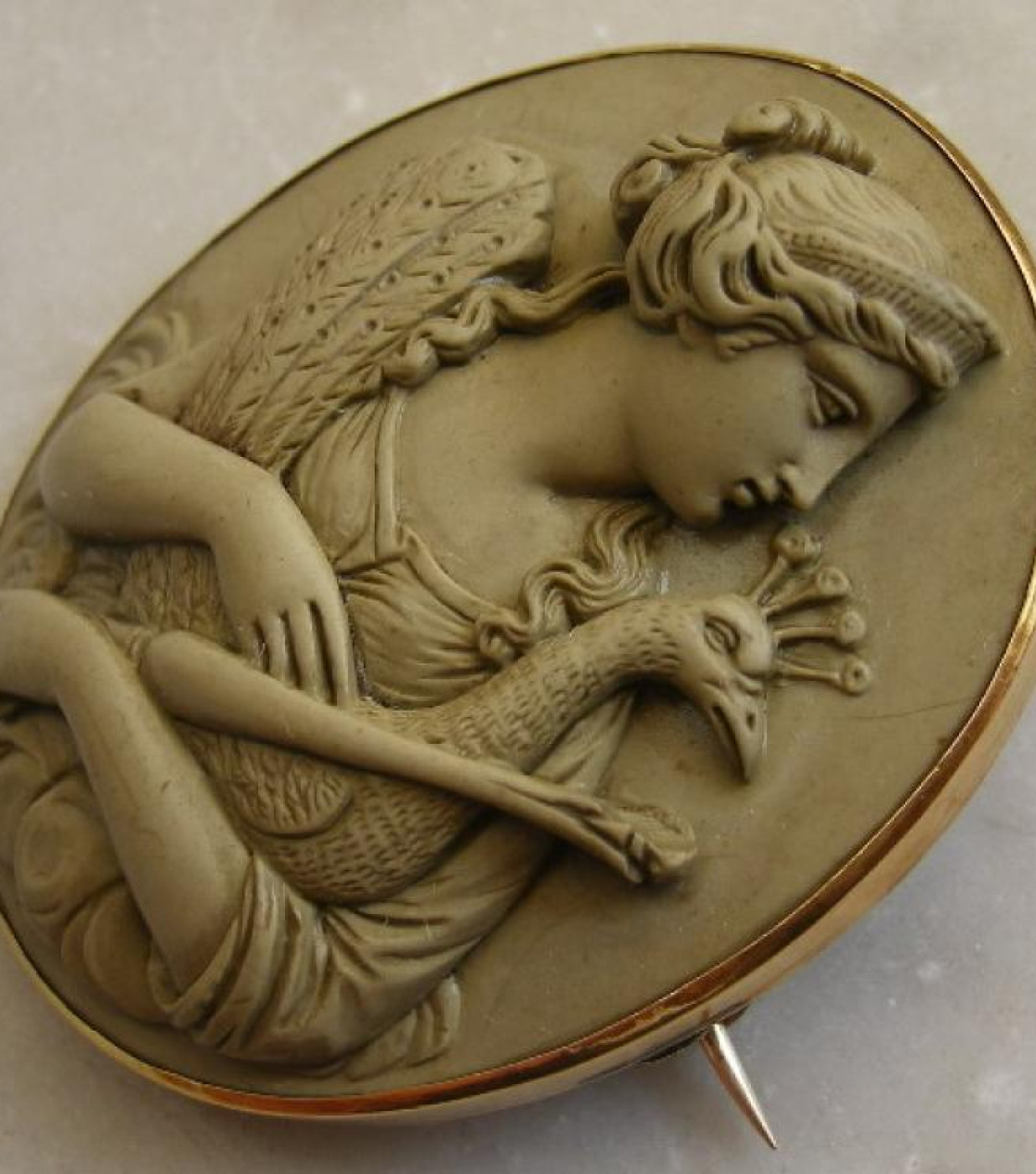 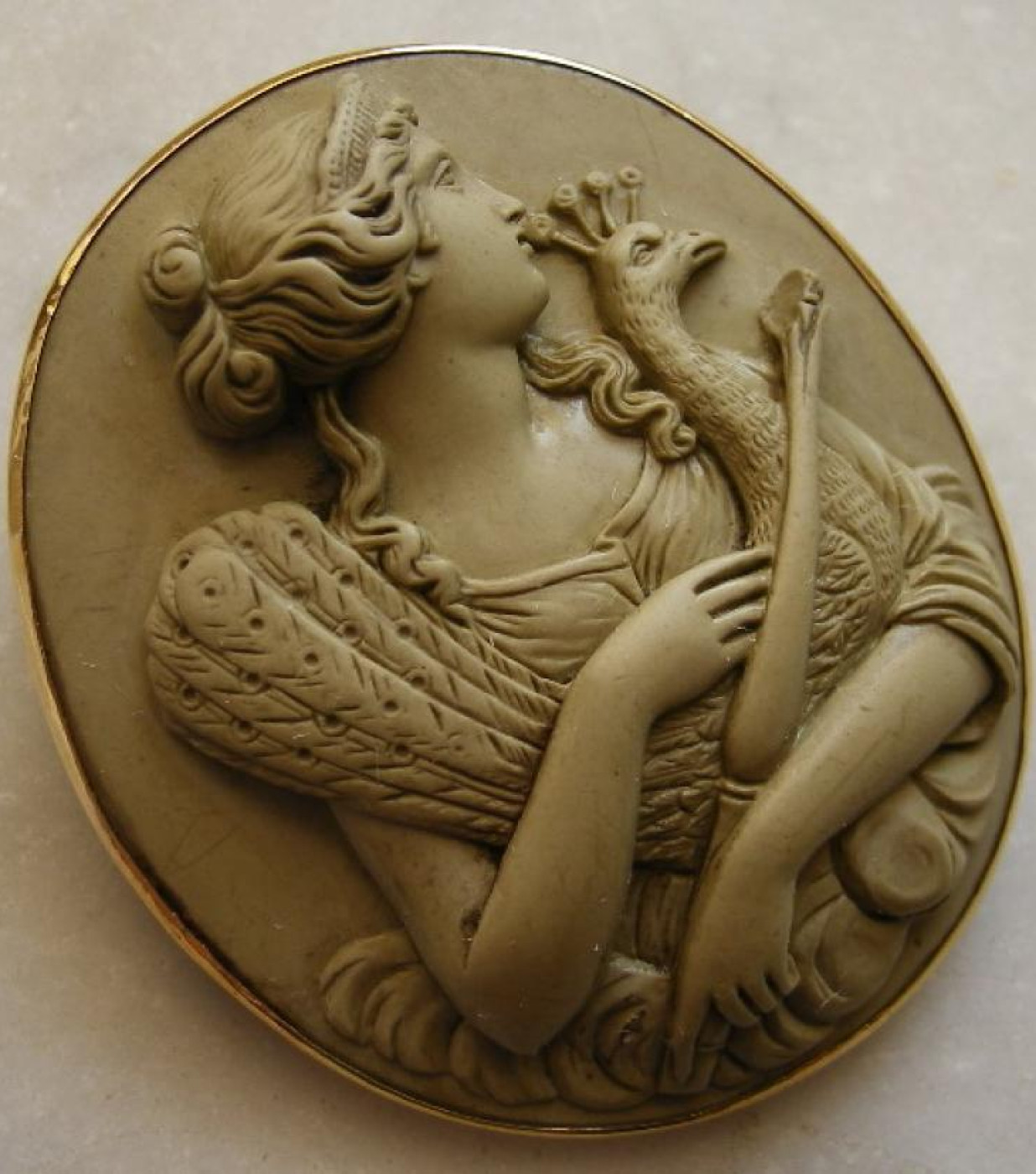 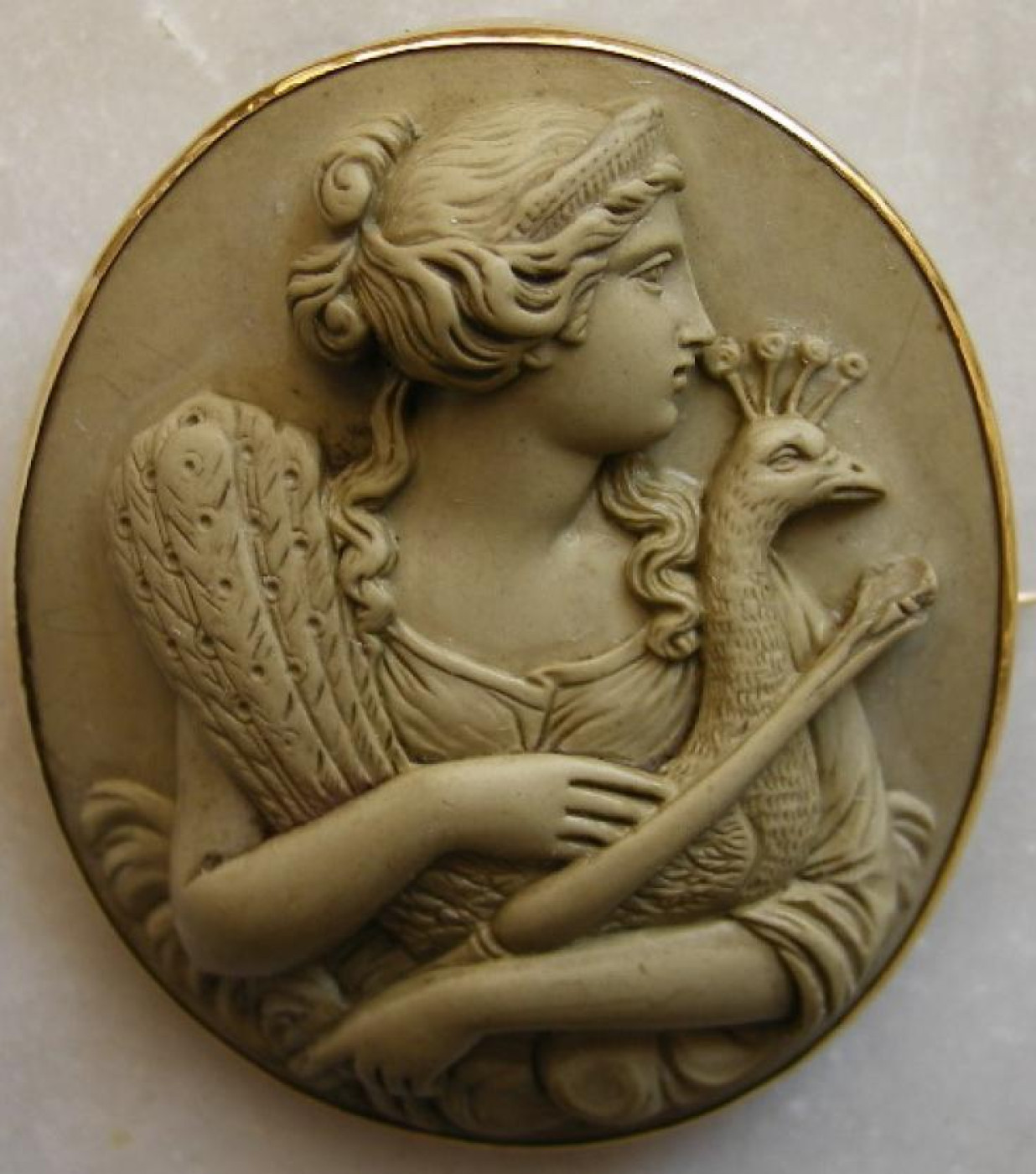 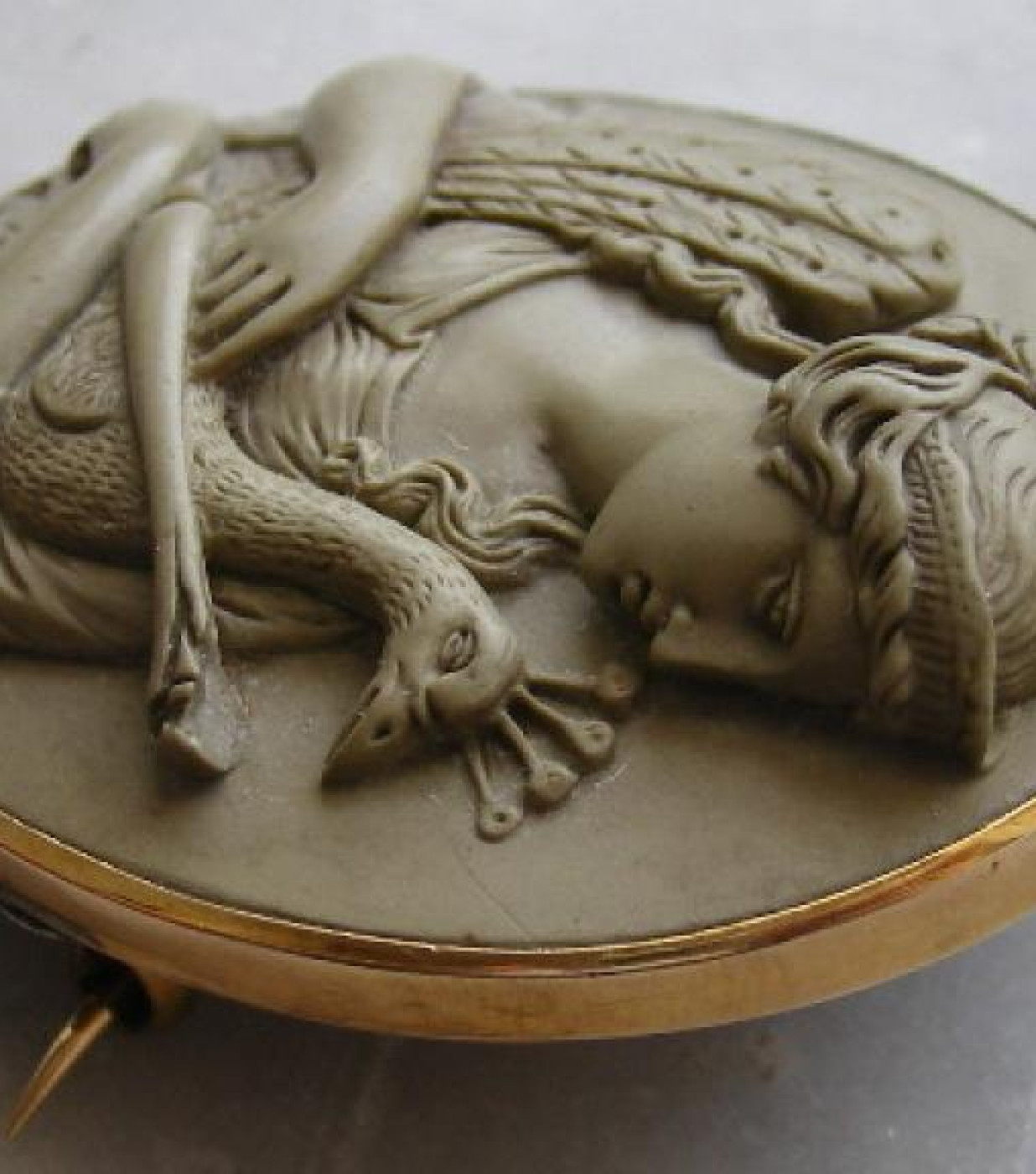 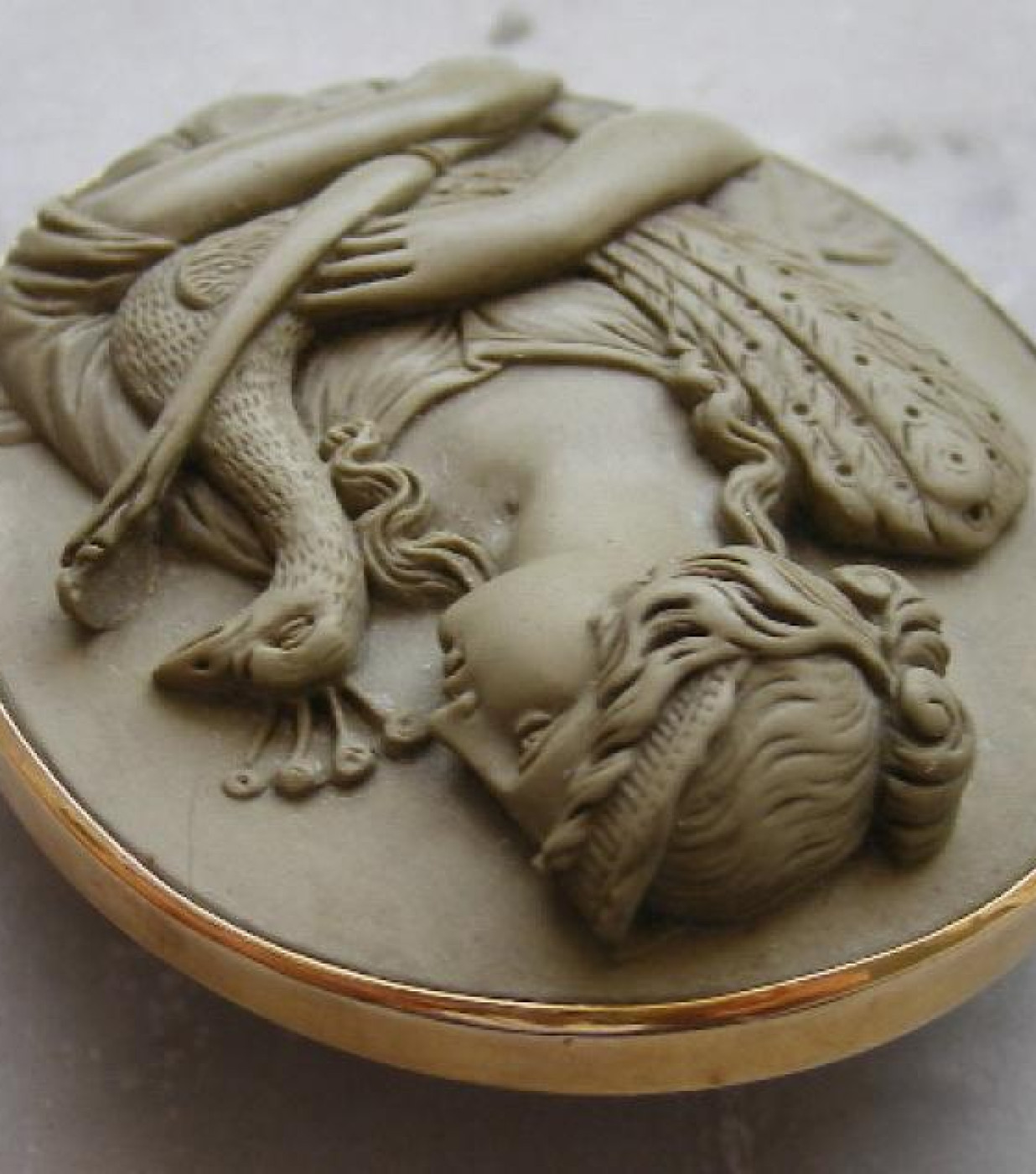 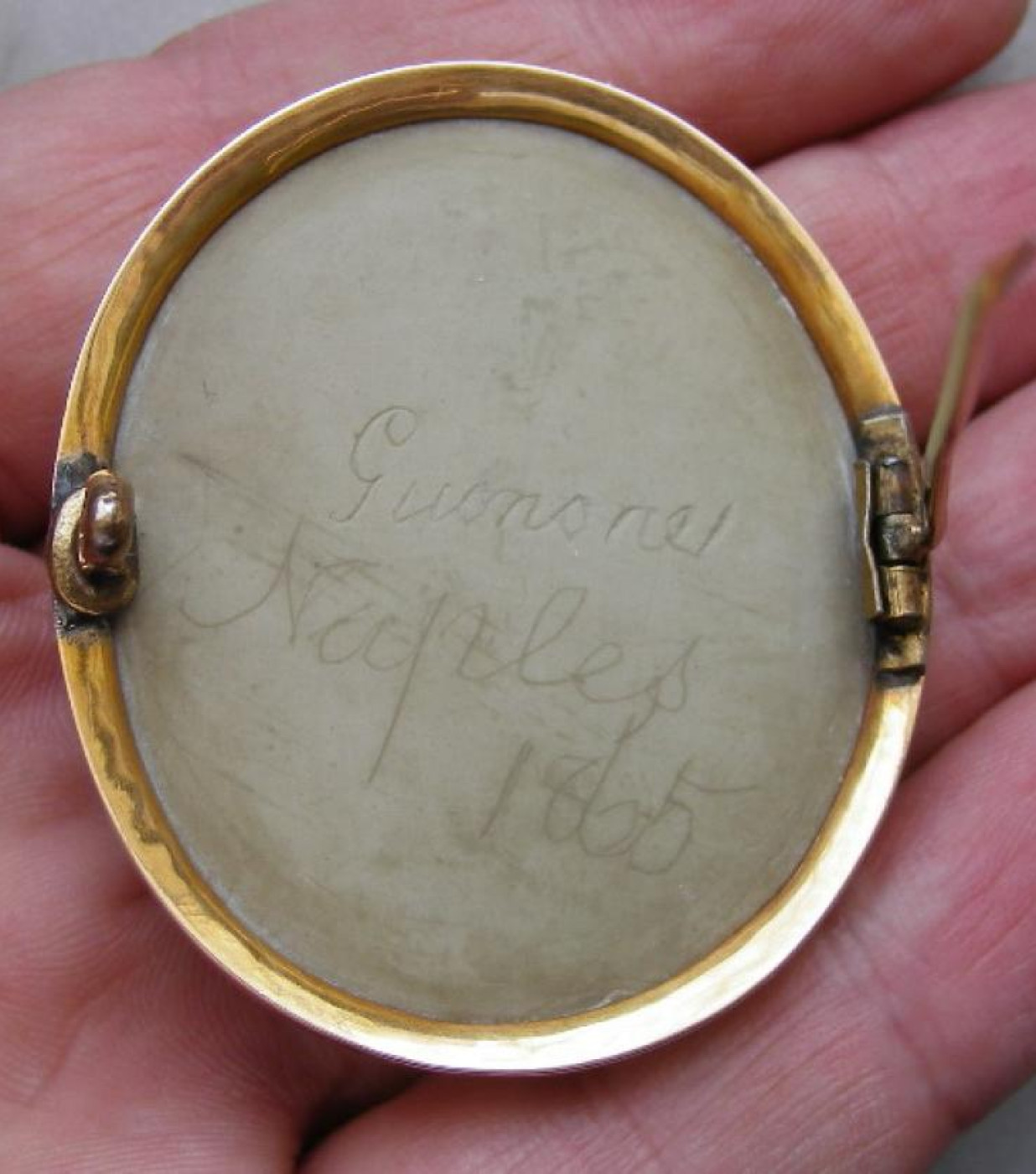 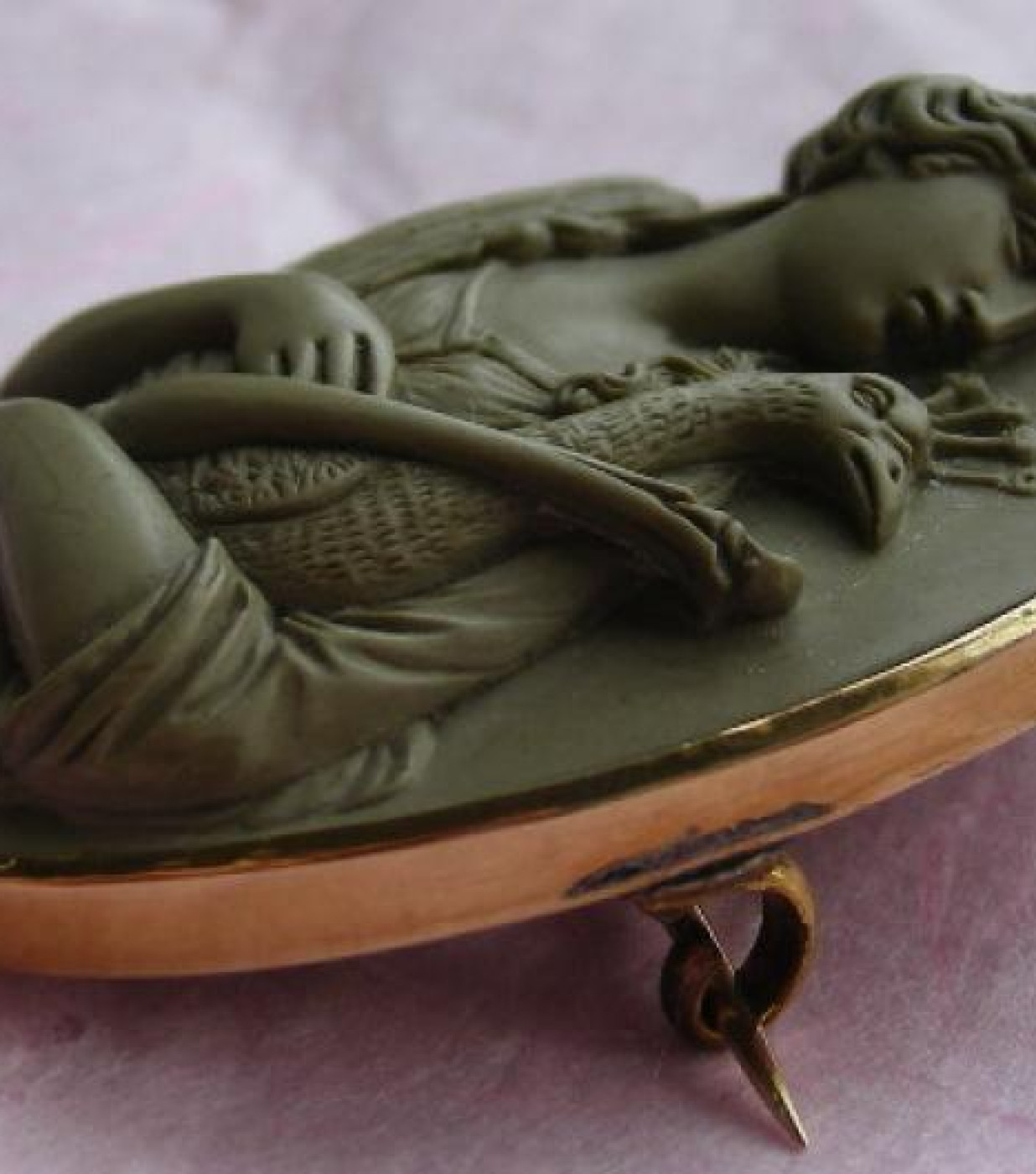 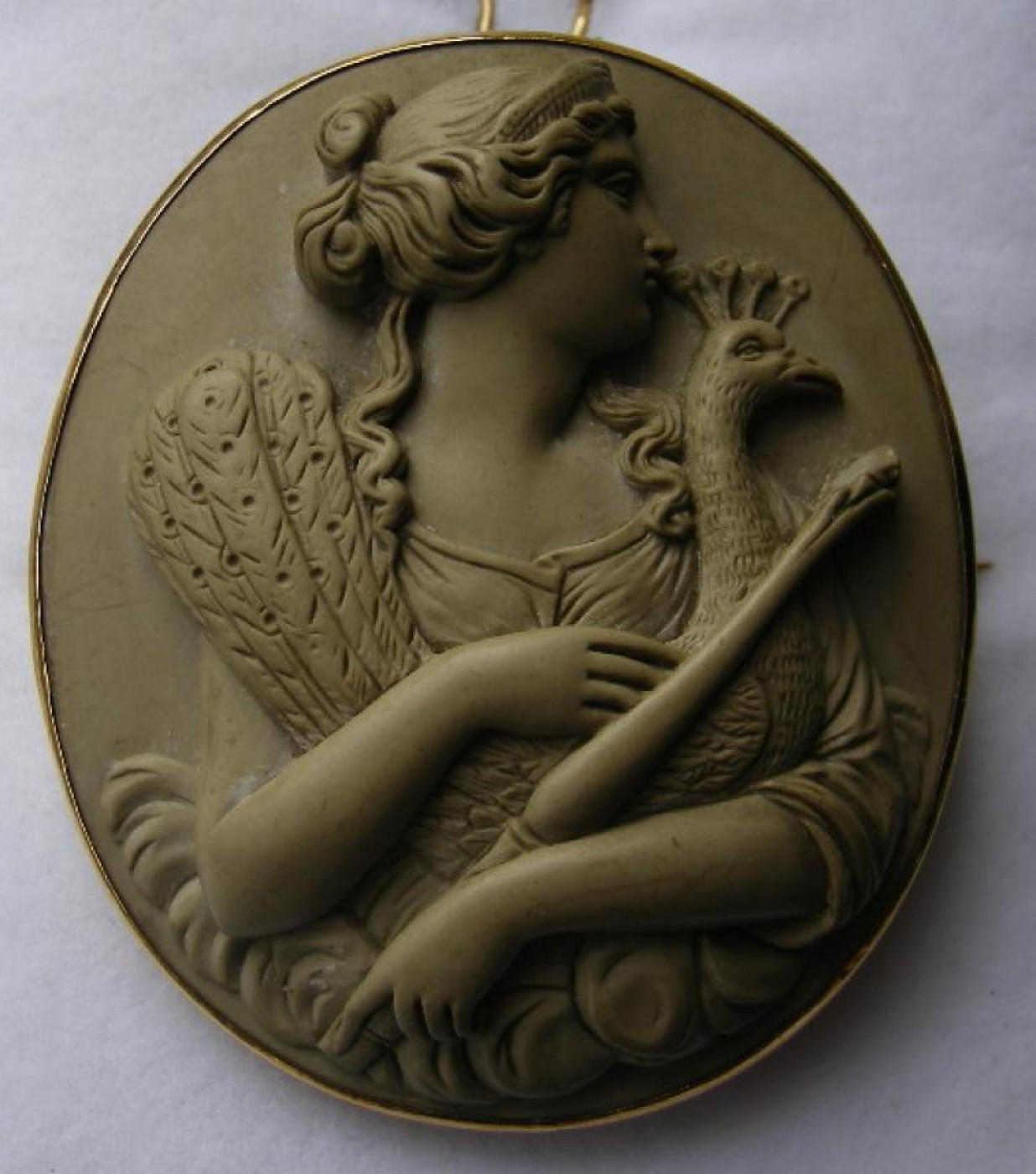 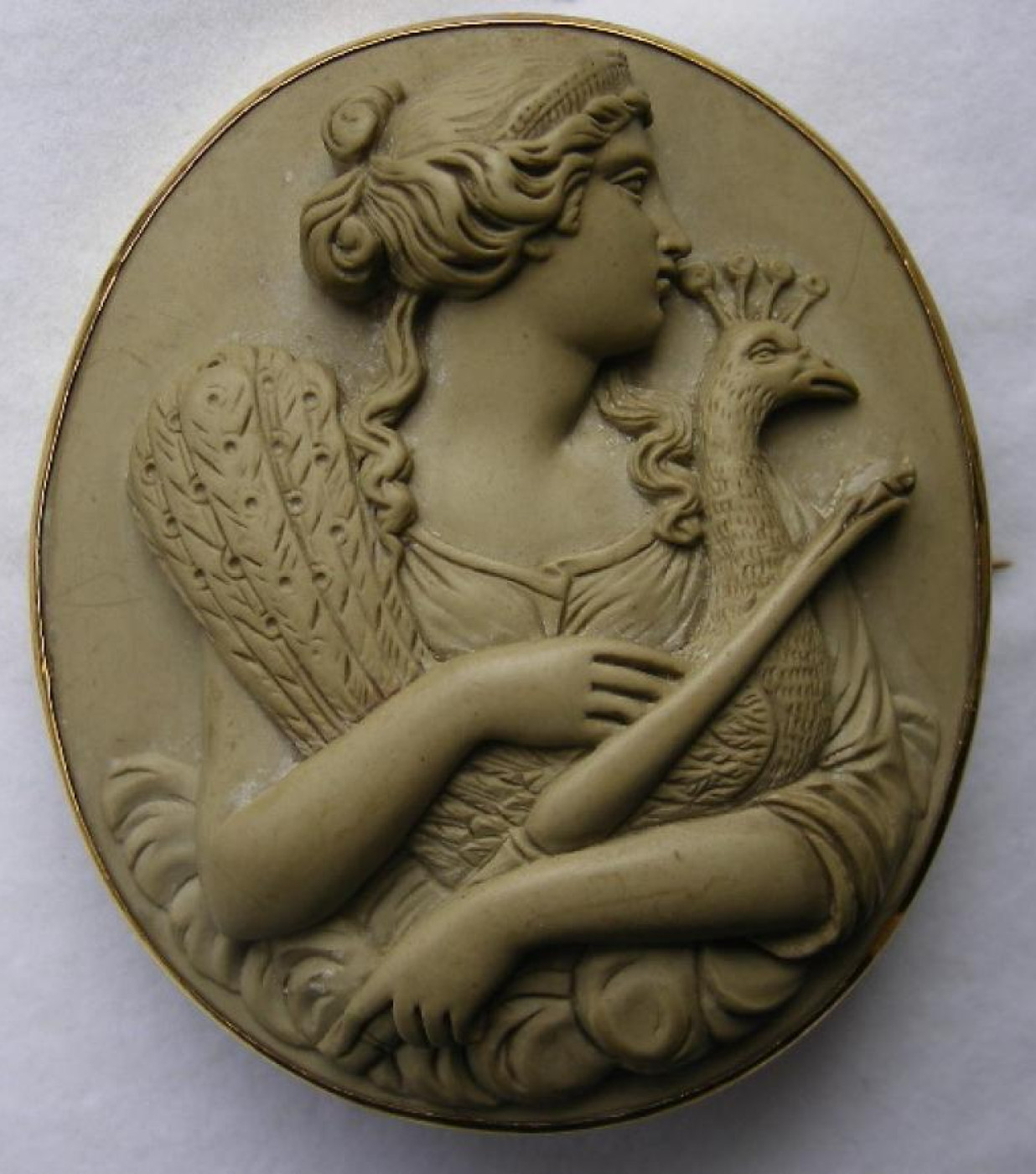 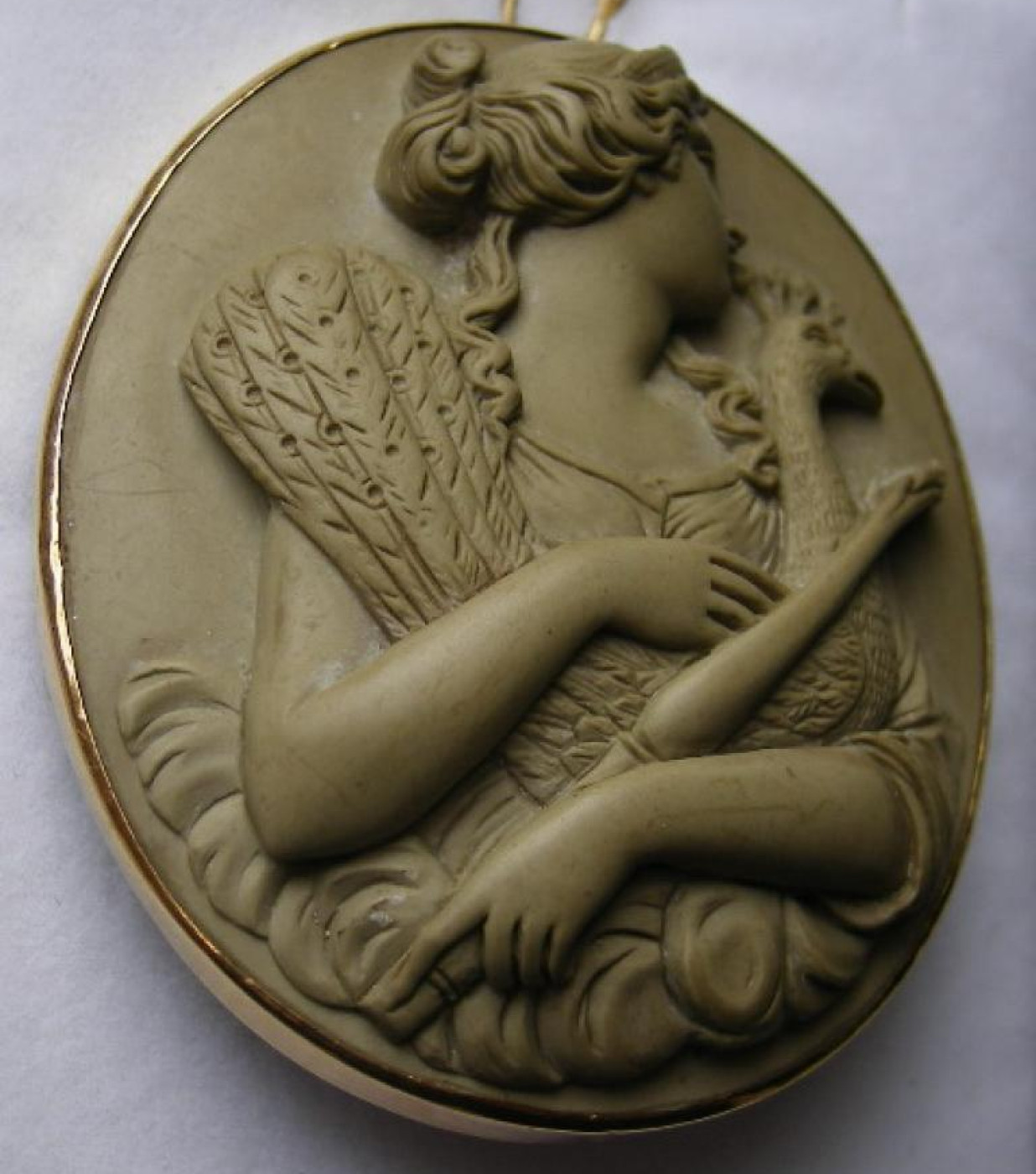 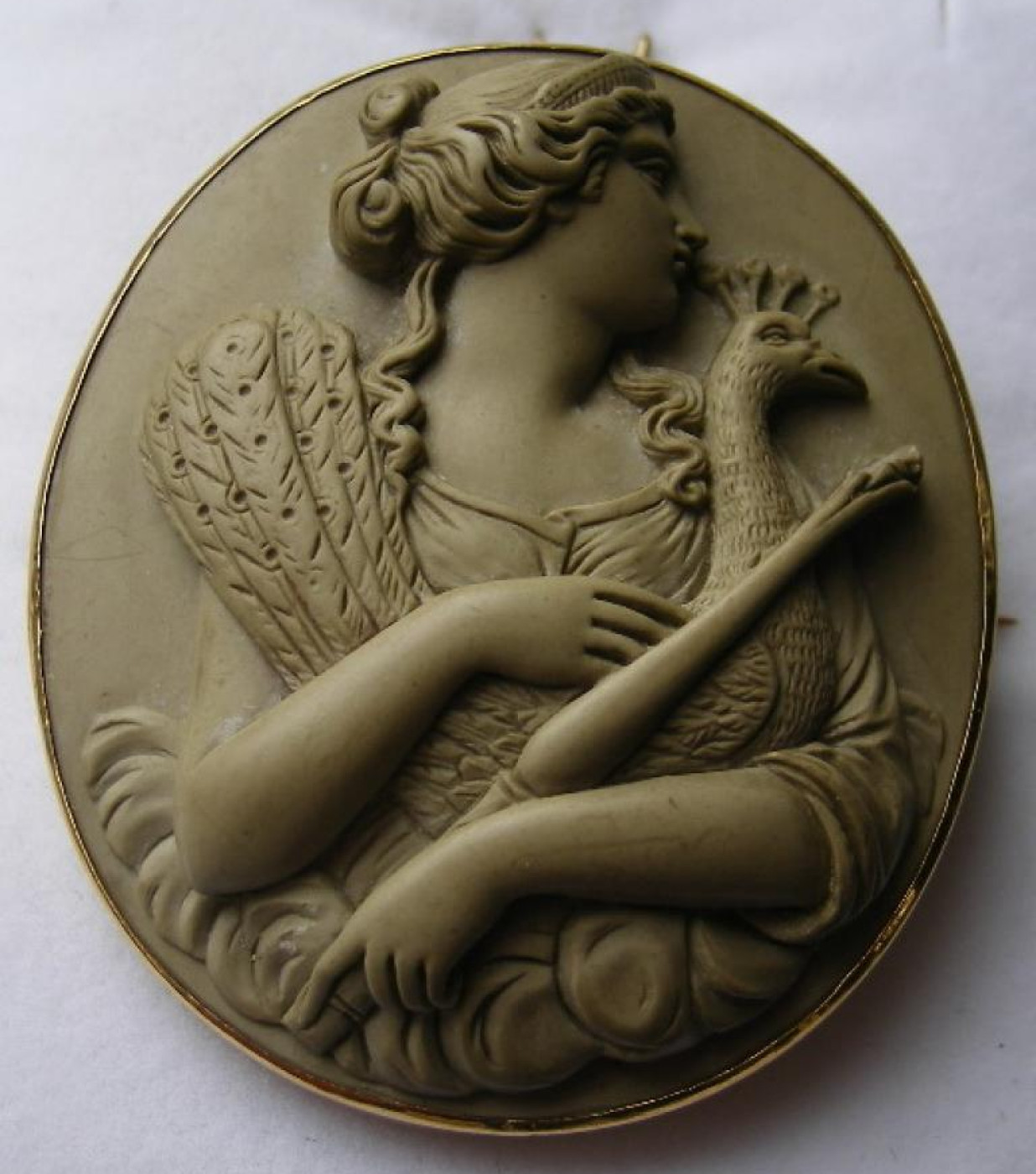 More than Museum Quality, rarest lava depiction of Hera, the Queen of Gods. Here she's portrayed in a rare pose for a lava cameo. She's holding a  peacock and a sceptre. She's wearing her crown called "Polos" and worn by the most important  Mother Goddesses of several antique cultures. Probably this subject is after an ancient Greek coin. This subject really jumps out from the base. Everything is perfectly carved and so realistic. All the details even so tiny are perfectly rendered. This is a real work of art, a very rare piece from the Victorian era. The cameo is signed on the back, it reads "Giunone, Naples 1865" where Giunone is Italian and stays for Juno the roman name of Hera. This is the first time that I see Hera so portrayed on a lava cameo. The pictures speak by themselves about the beauty of this piece. This is another masterly carved cameo. A very desirable collectors piece, rare and museum quality cameo.
A bit of History:
Greek mythology Era or Hera (Juno for the Romans) was the wife of Zeus, and so the Queen of Gods. Faithful and jealous wife. She was the Goddess of the wedding and protector of the married women and of the birth and her constant fight against the infidelity of Zeus gave origin to the recurring theme of the "Hera's jealousy". Hera gave birth to Ares (God of War), Hephaestus (God of Fire), Hebe (Goddess of Youth) and Eileithyia (Goddess of the birth). Hera, jealous wife, often persecuted lovers and sons of Zeus. She never forgot an offence and was well known per her revengeful nature. Being angry with the Trojan prince Paris who preferred Aphrodite (Venus), Goddess of Love, to her, in a beauty contest, Hera helped the Greeks in the War of Troy and was satisfied only when the city was finally destroyed. The corresponding figure in Roman mythology was Juno. Her sacred symbols were the cow and the peacock. Hera was portrayed as a solemn and majestic figure, often sat on a throne while wears as crown the "Polos", a typical head gear of a cylindrical shape worn by the most important Mother Goddesses of several antique cultures. She held a pomegranate in her hand, symbol of fertility and death. The temples dedicated to her date back to 7th century B.C. and they were the earliest historical examples of Monumental Greek Temples, the "Heraion" in the island of Samo and the "Heraion" of Argo.