Girl with a Basket of Fruit after Titian 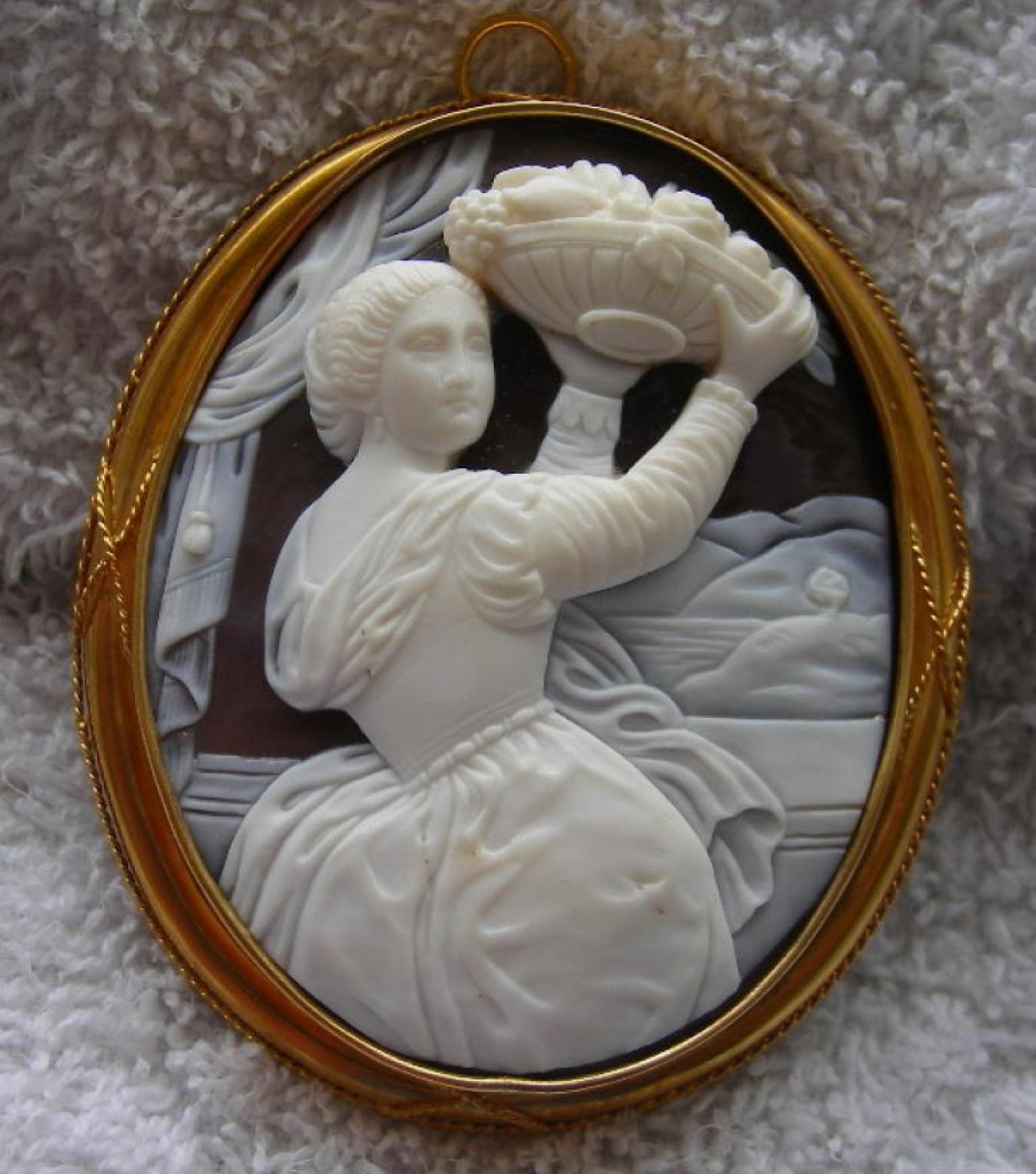 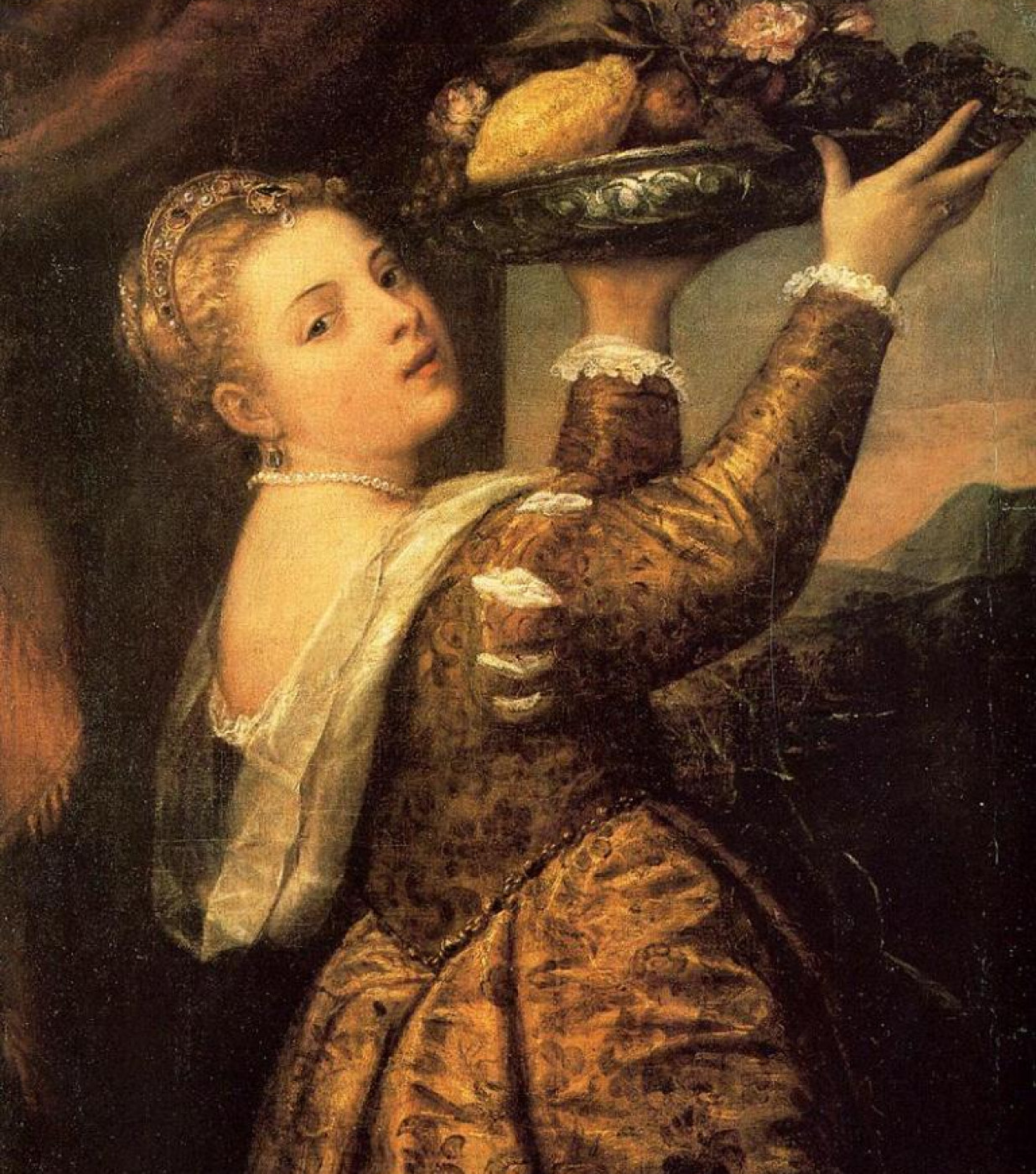 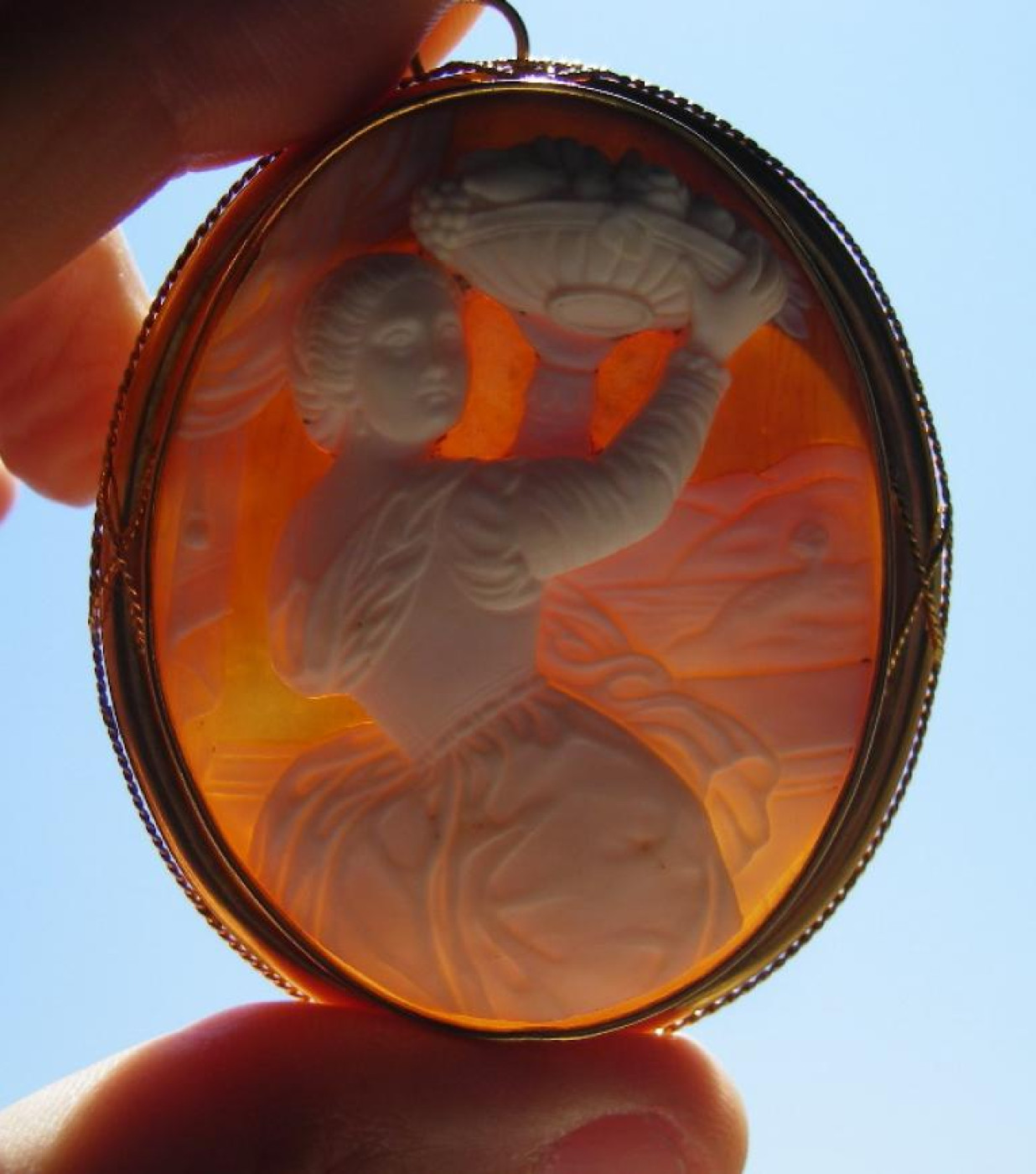 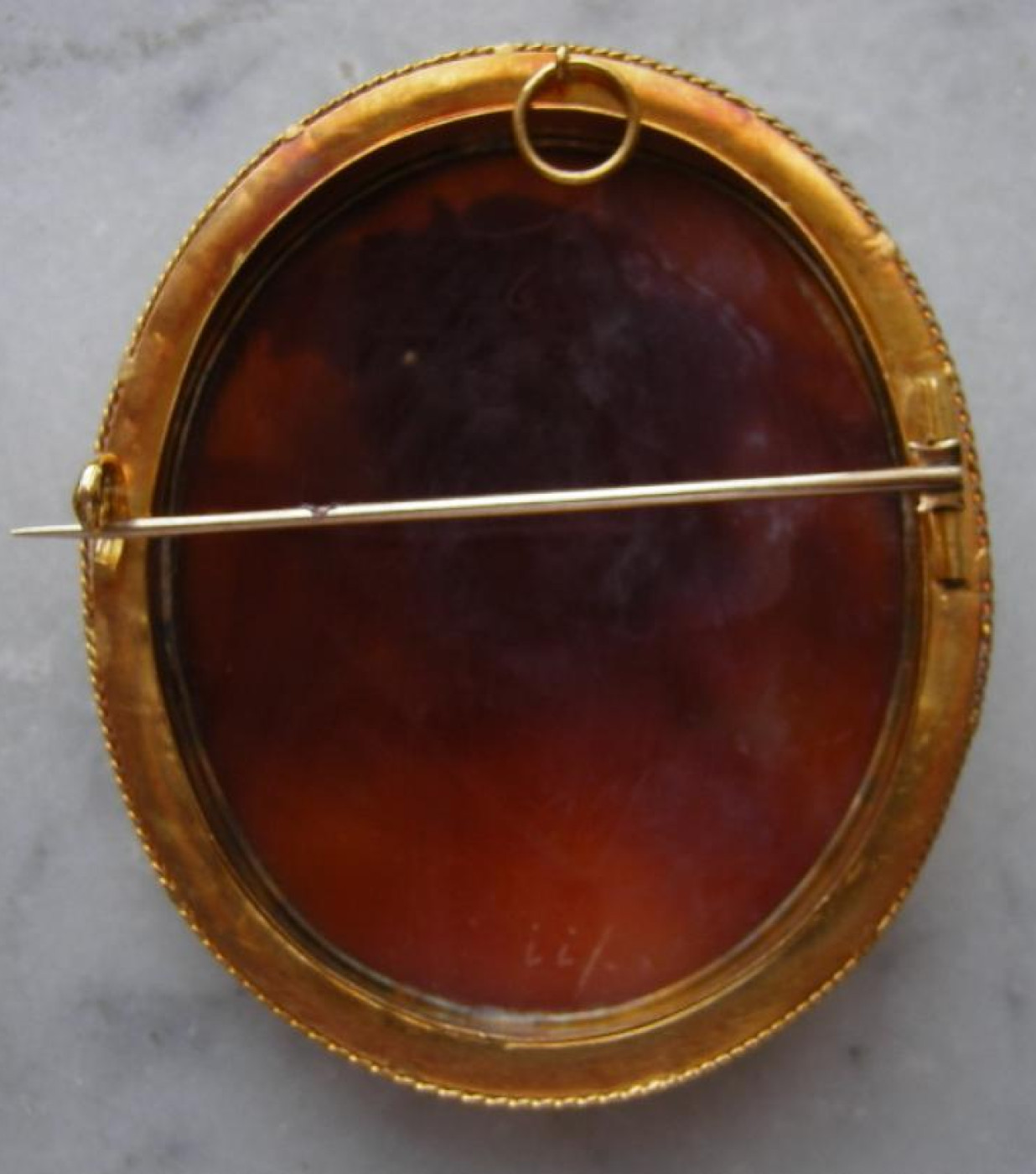 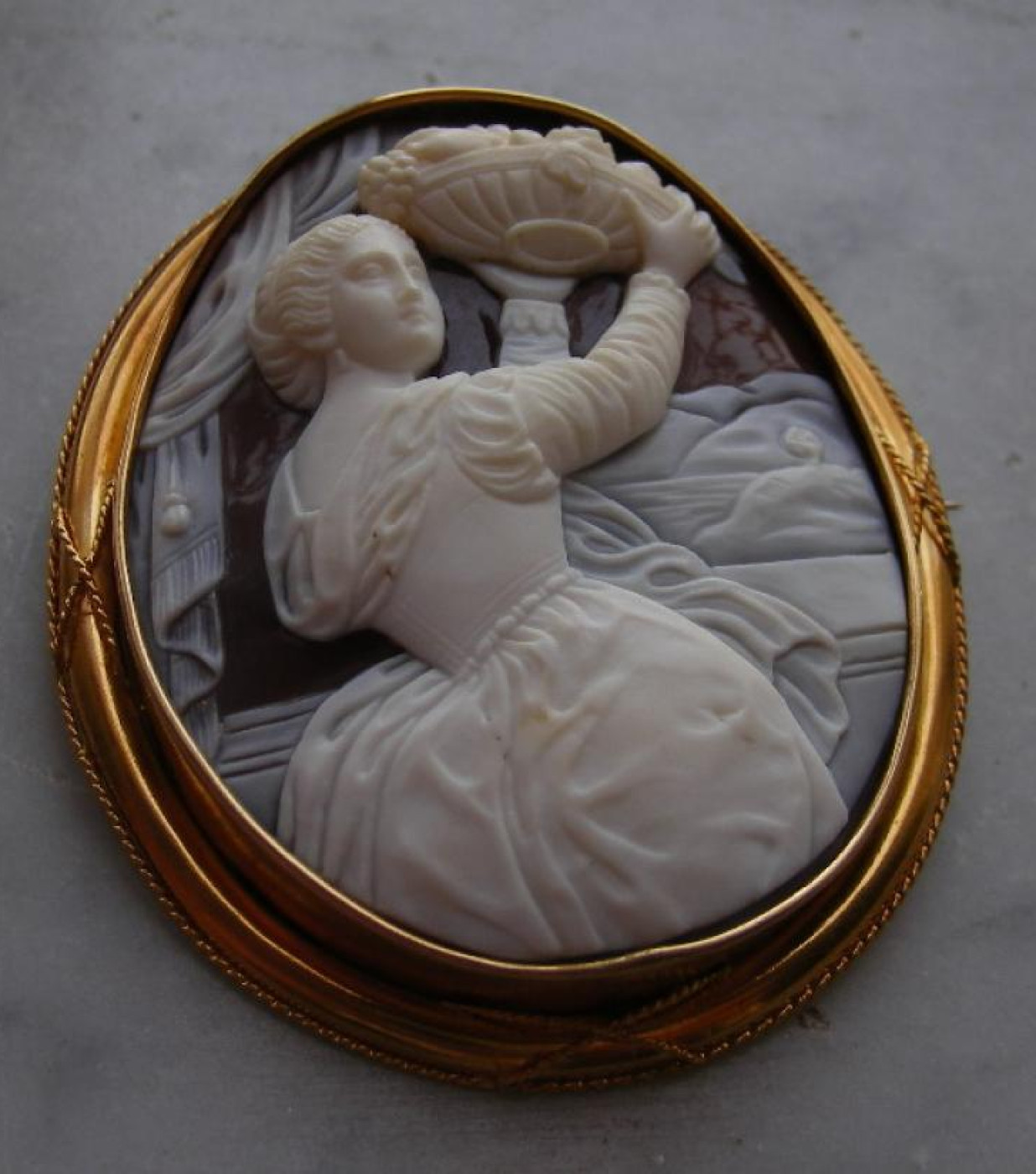 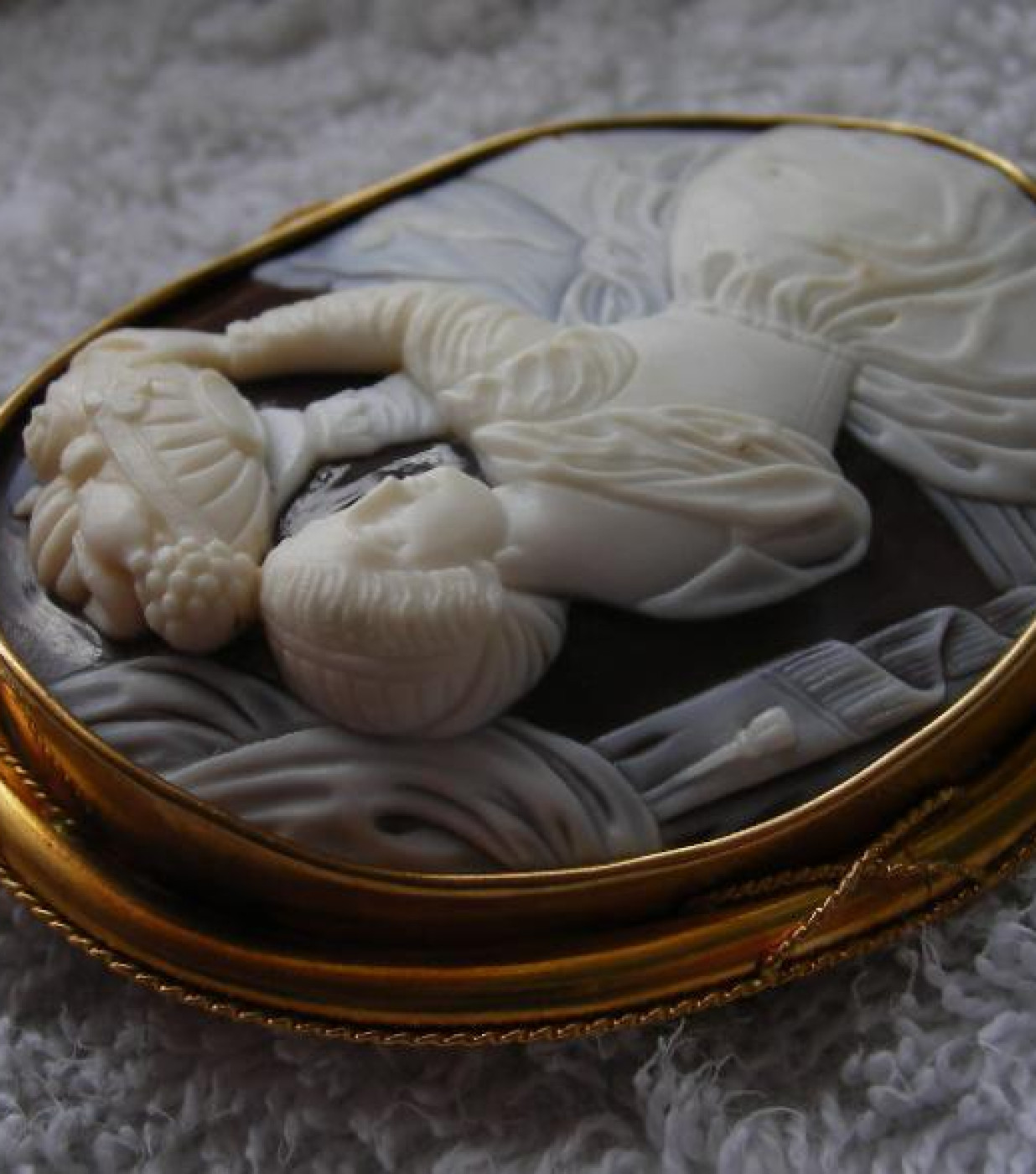 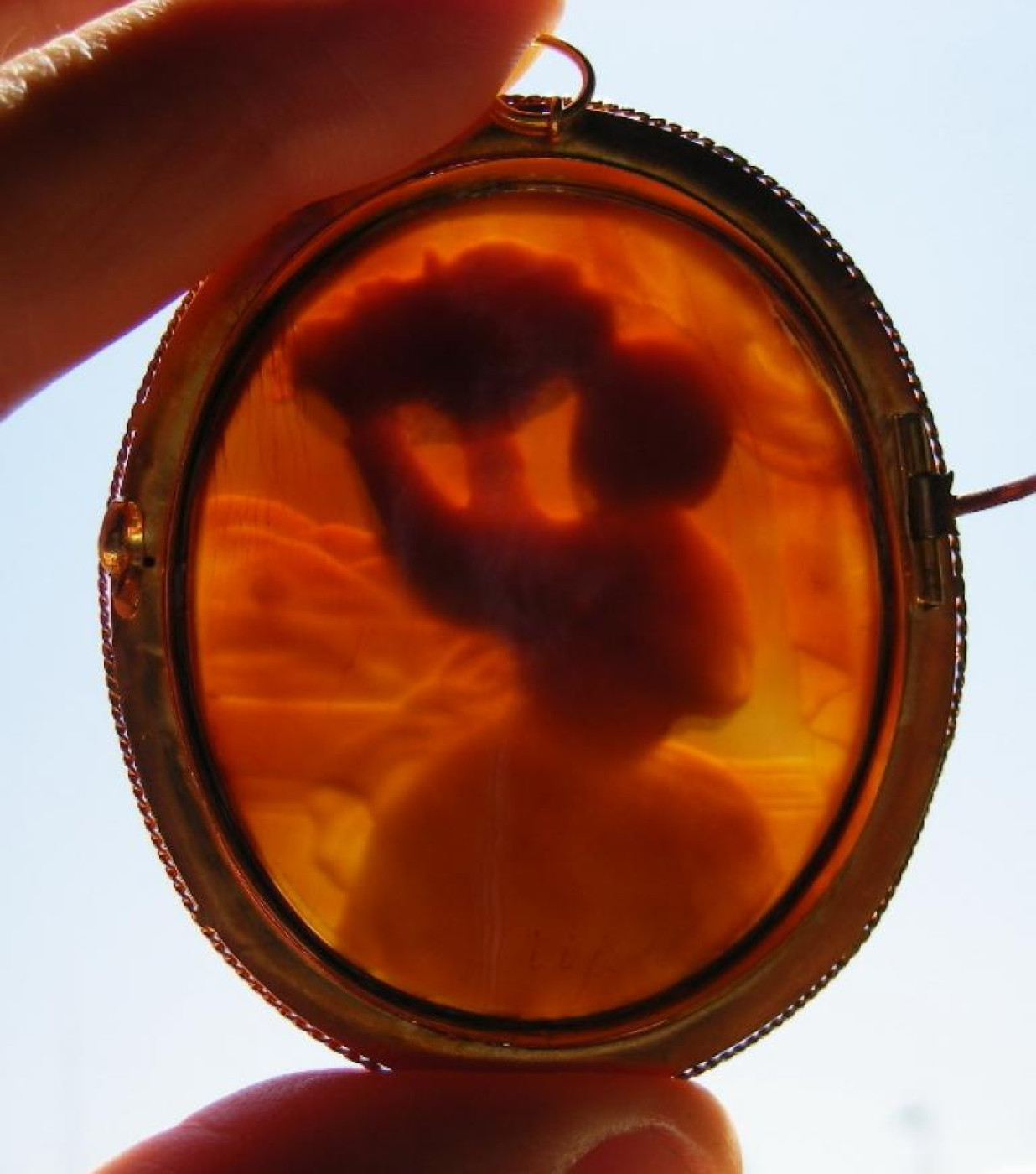 Museum Quality and huge cameo depicting a rarest subject, "Girl with a basket of fruits" after a painting by Titian. The girl portrayed is  the daughter of Titian, Lavinia, even portrayed in other several important works as the "Ecce Homo". The painting is from 1555/1558 and now is the  Staatliche Museum, Berlin, Germany. This cameo is simply incredible. A real work of art from another one, the painting. The carver has fully respected the subject of the painting making this cameo an outstanding work of art.  This is a three-dimensional cameo, just like a sculpture. I'm amazed looking at it.  Everything is masterly rendered. This is one of most beautiful cameos I have ever seen, the pictures speak by themselves. This is another masterly carved cameo. A very desirable collectors piece, rarest and museum quality cameo.
A bit of History:
Tiziano Vecelli or Tiziano Vecellio, born 1473/1490 (probably c.1488/1490), died 27 August 1576, better known as Titian, was the leading painter of the 16th-century Venetian school of the Italian Renaissance. He was born in Pieve di Cadore, near Belluno (in Veneto), in the Republic of Venice. During his lifetime he was often called Da Cadore, taken from the place of his birth. Recognized by his contemporaries as "The Sun Amidst Small Stars" (recalling the famous final line of Dante's Paradiso), Titian was one of the most versatile of Italian painters, equally adept with portraits, landscape backgrounds, and mythological and religious subjects. His painting methods, particularly in the application and use of color, would exercise a profound influence not only on painters of the Italian Renaissance, but on future generations of Western art. During the course of his long life Titian's artistic manner changed drastically but he retained a lifelong interest in color. Although his mature works may not contain the vivid, luminous tints of his early pieces, their loose brushwork and subtlety of polychromatic modulations are without precedent in the history of Western art. His works are now in the most important and famous museums of the world as the National Gallery in London, the Louvre in Paris, the Uffizi and Palazzo Pitti in Florence, the Prado in Madrid, the Getty Museum in Los Angeles, the Hermitage in St. Petersburg just to write some without counting many works that still are in Italian churches.