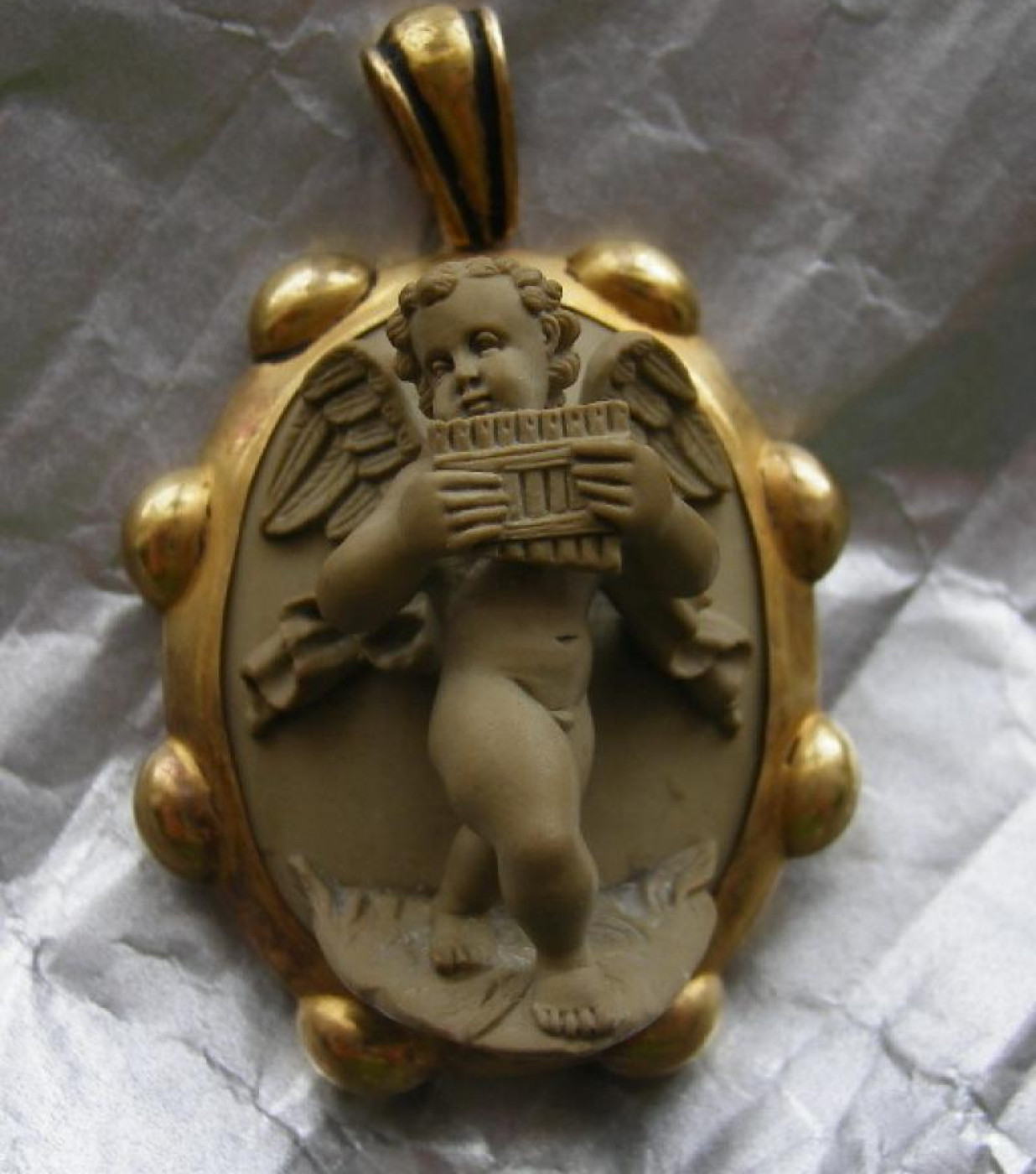 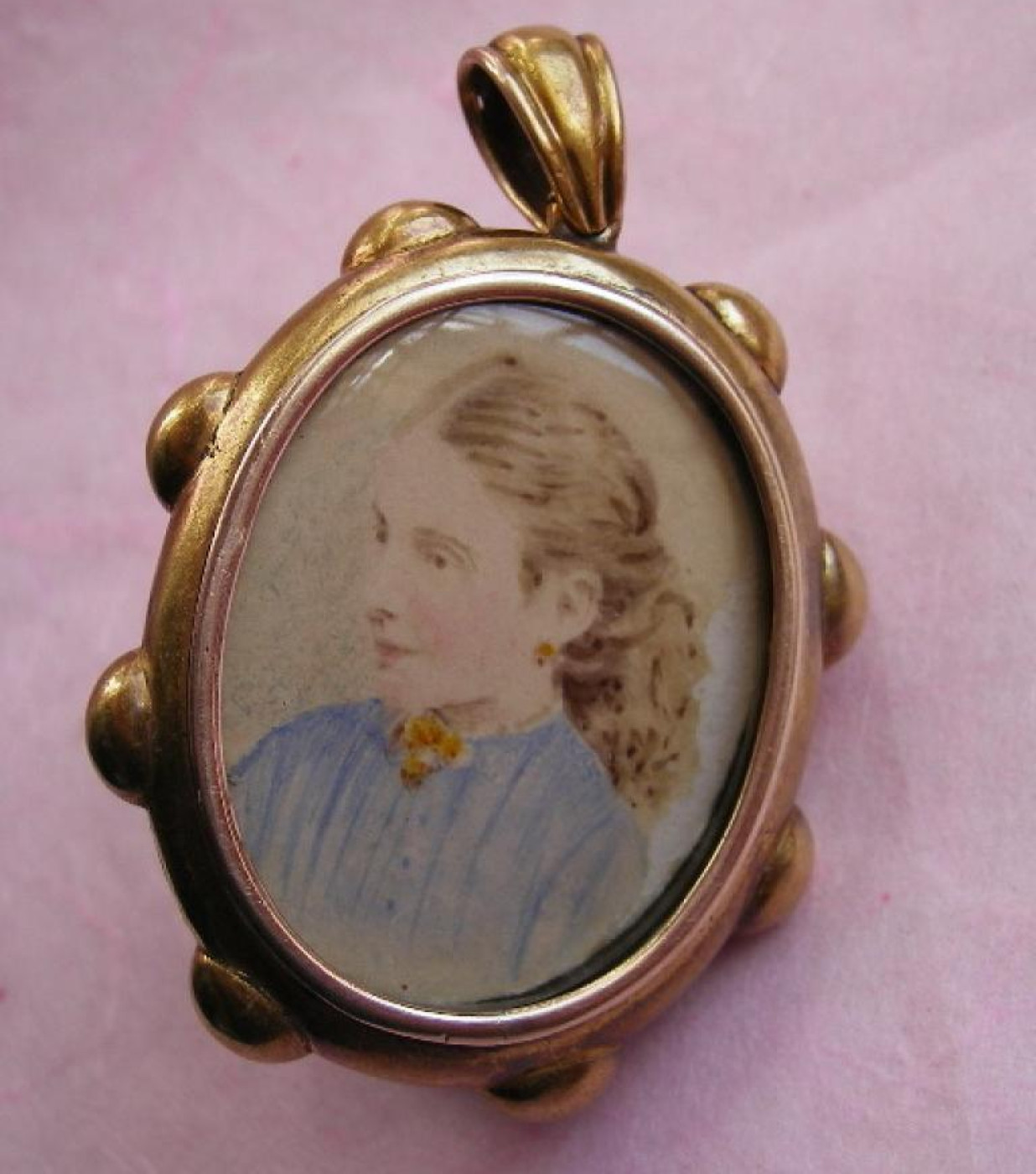 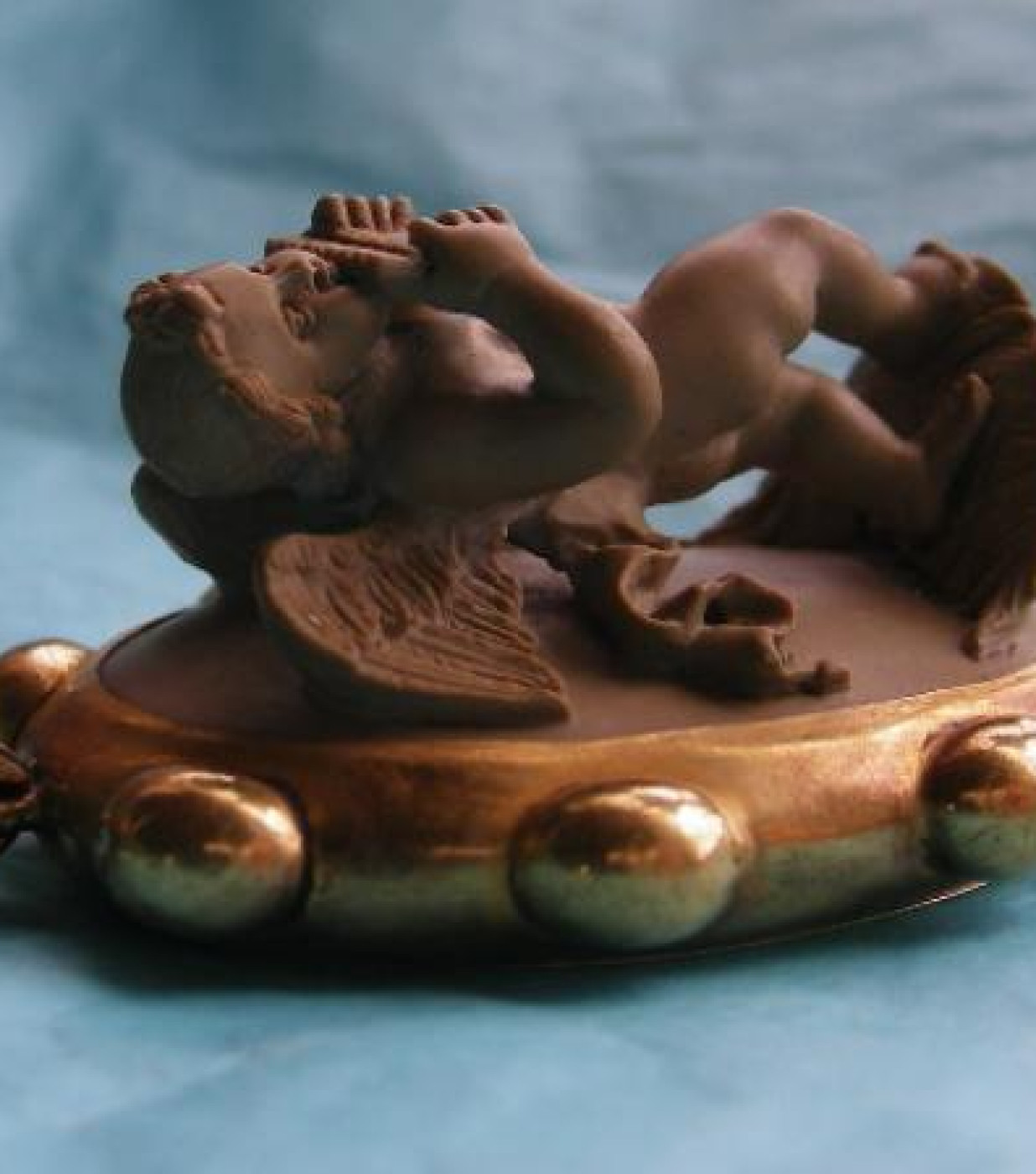 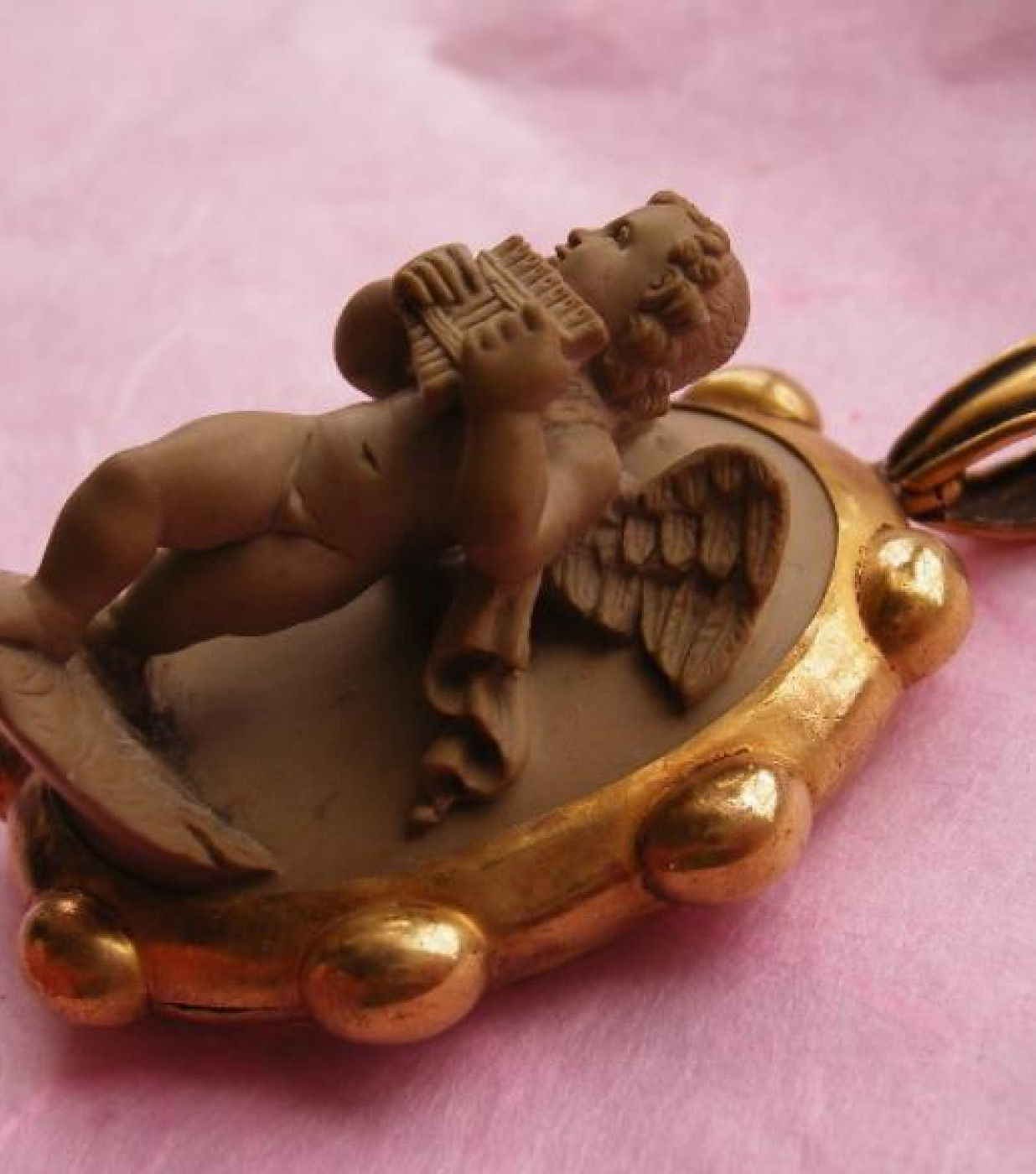 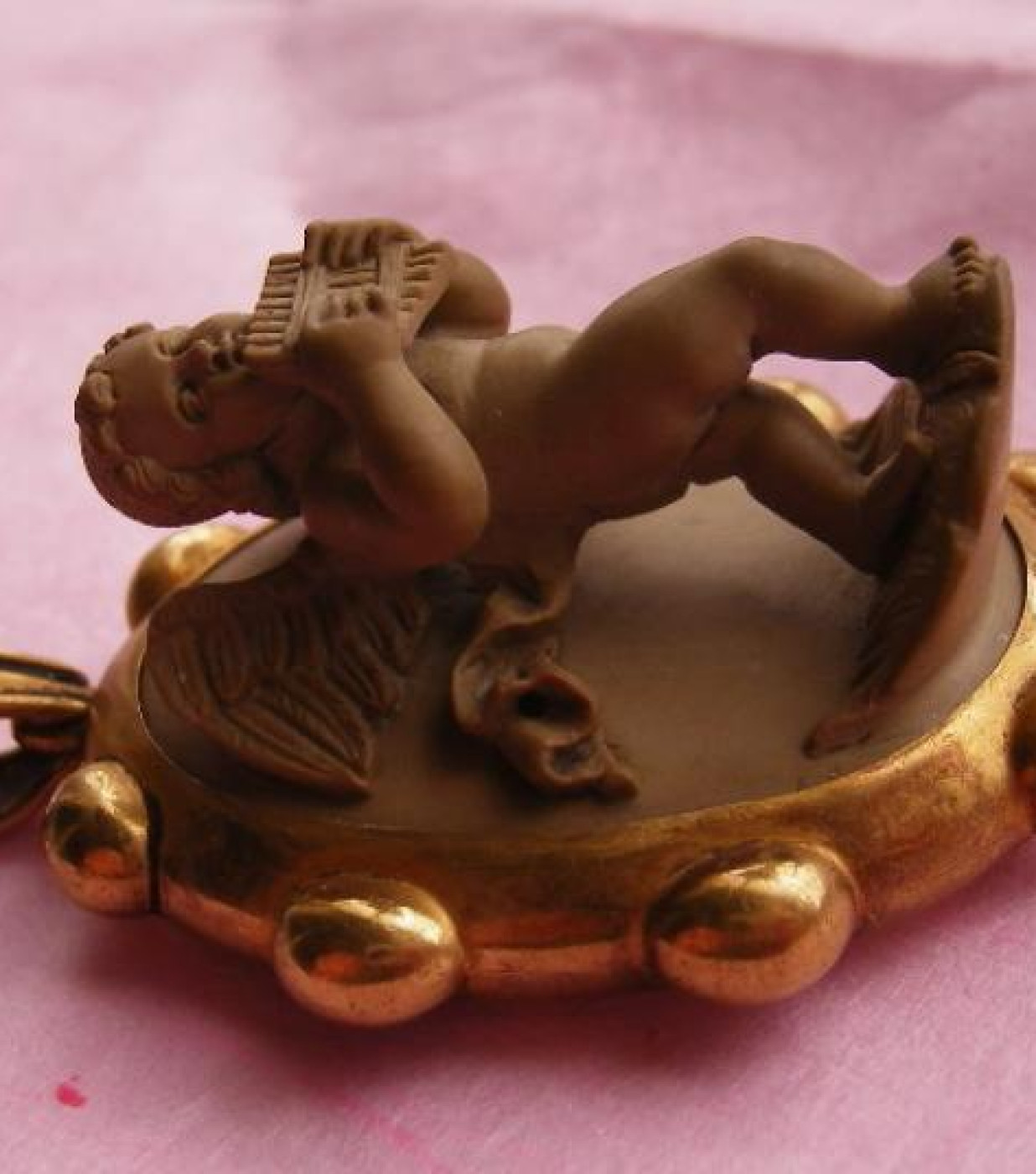 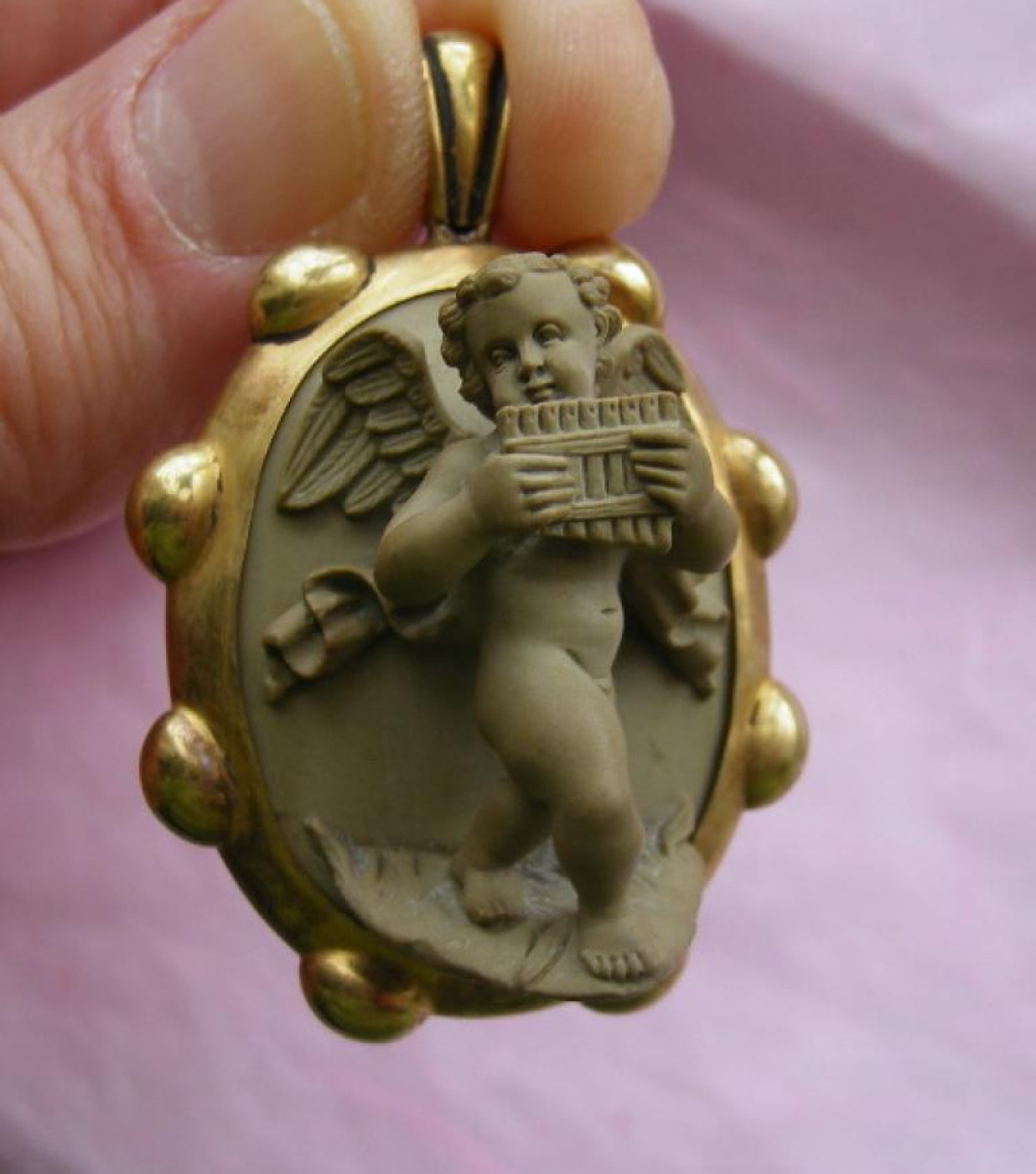 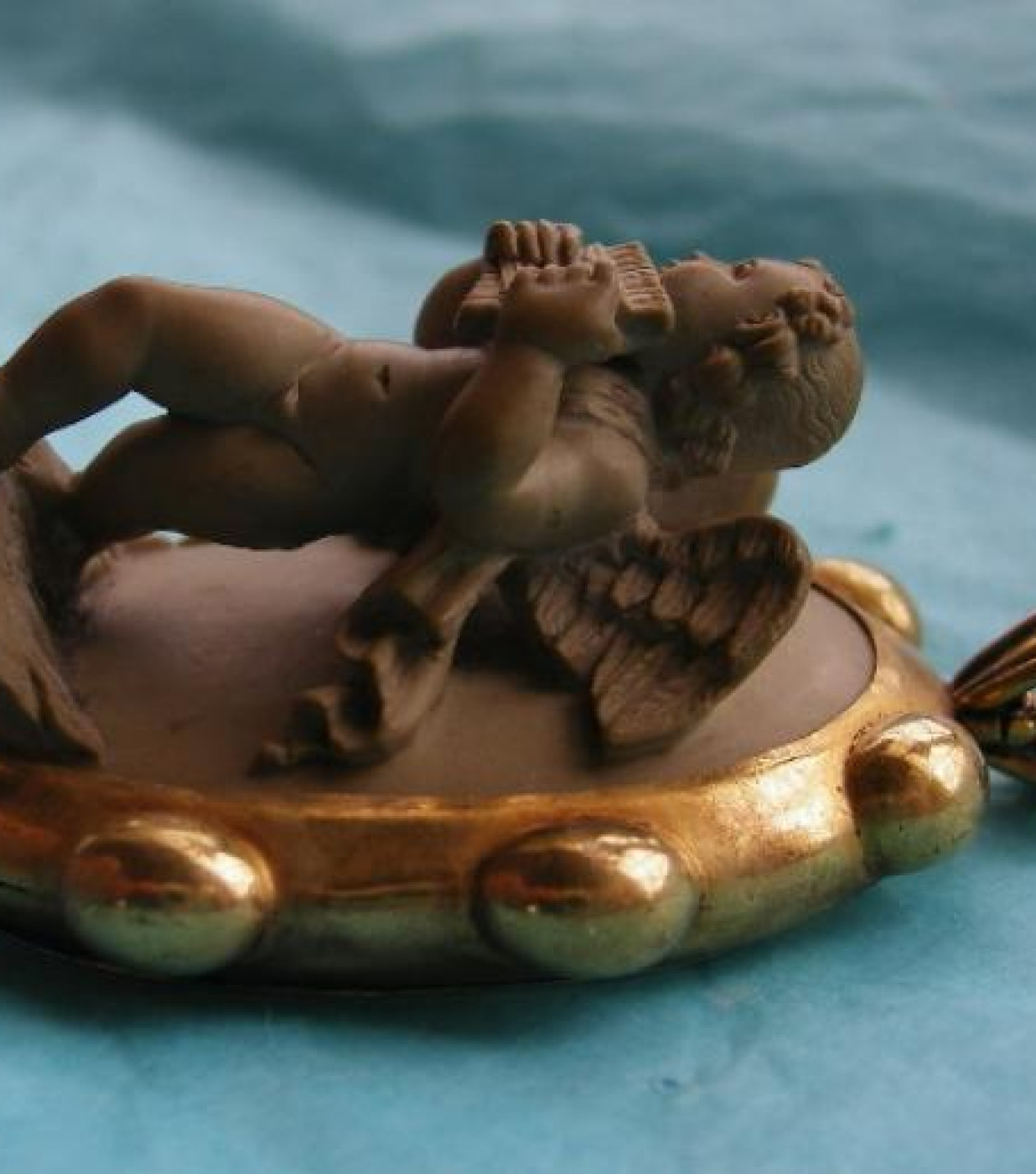 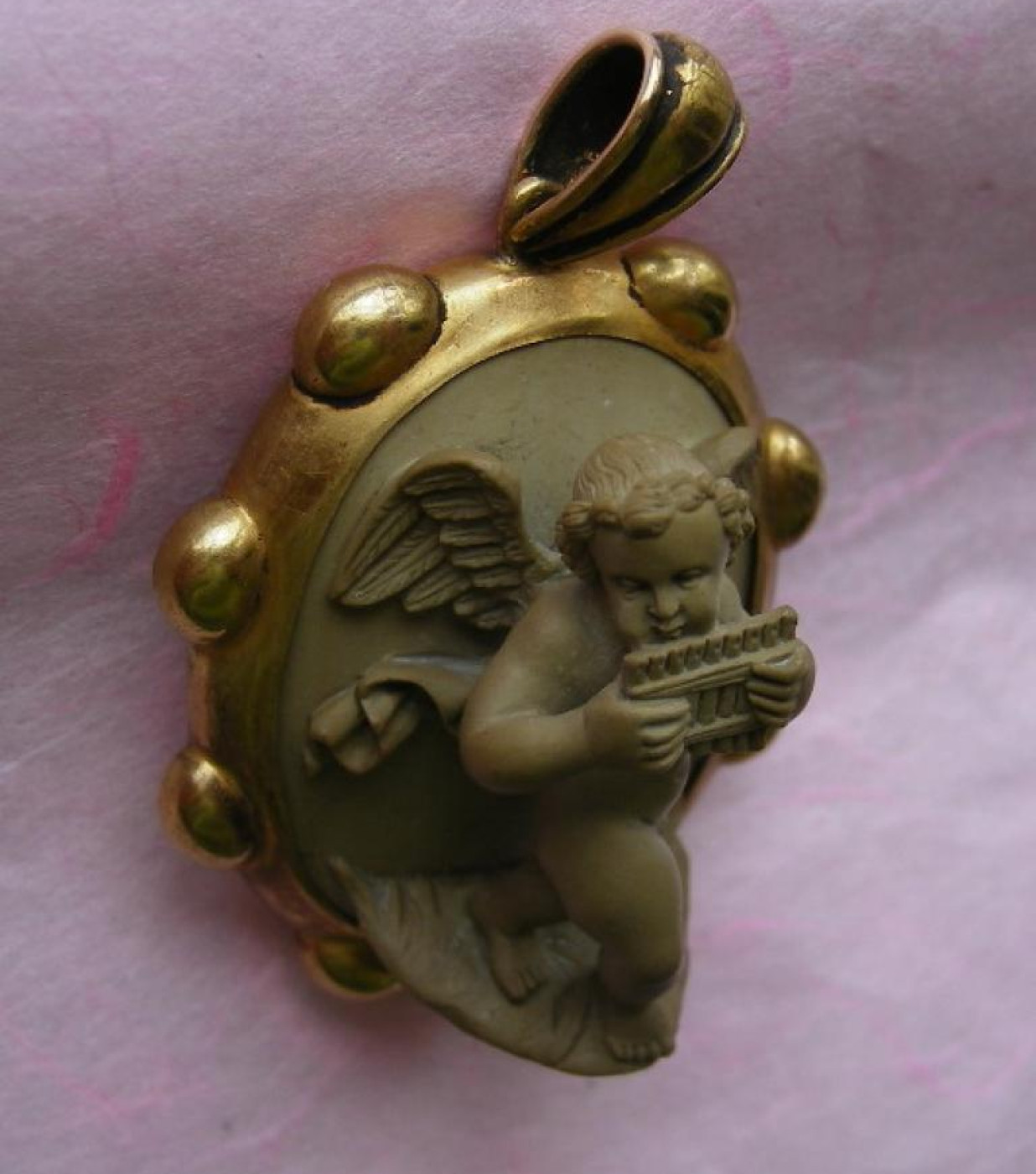 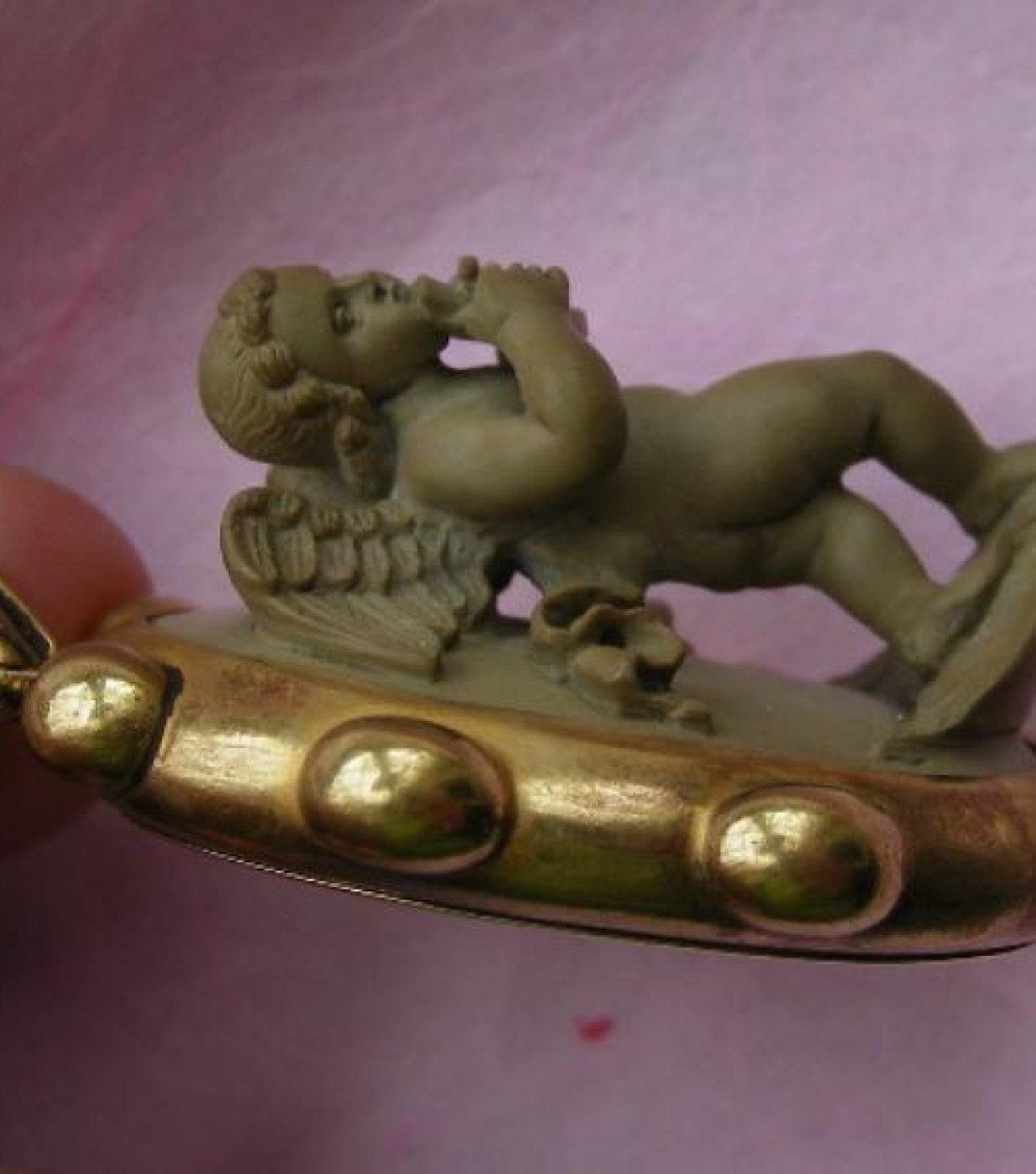 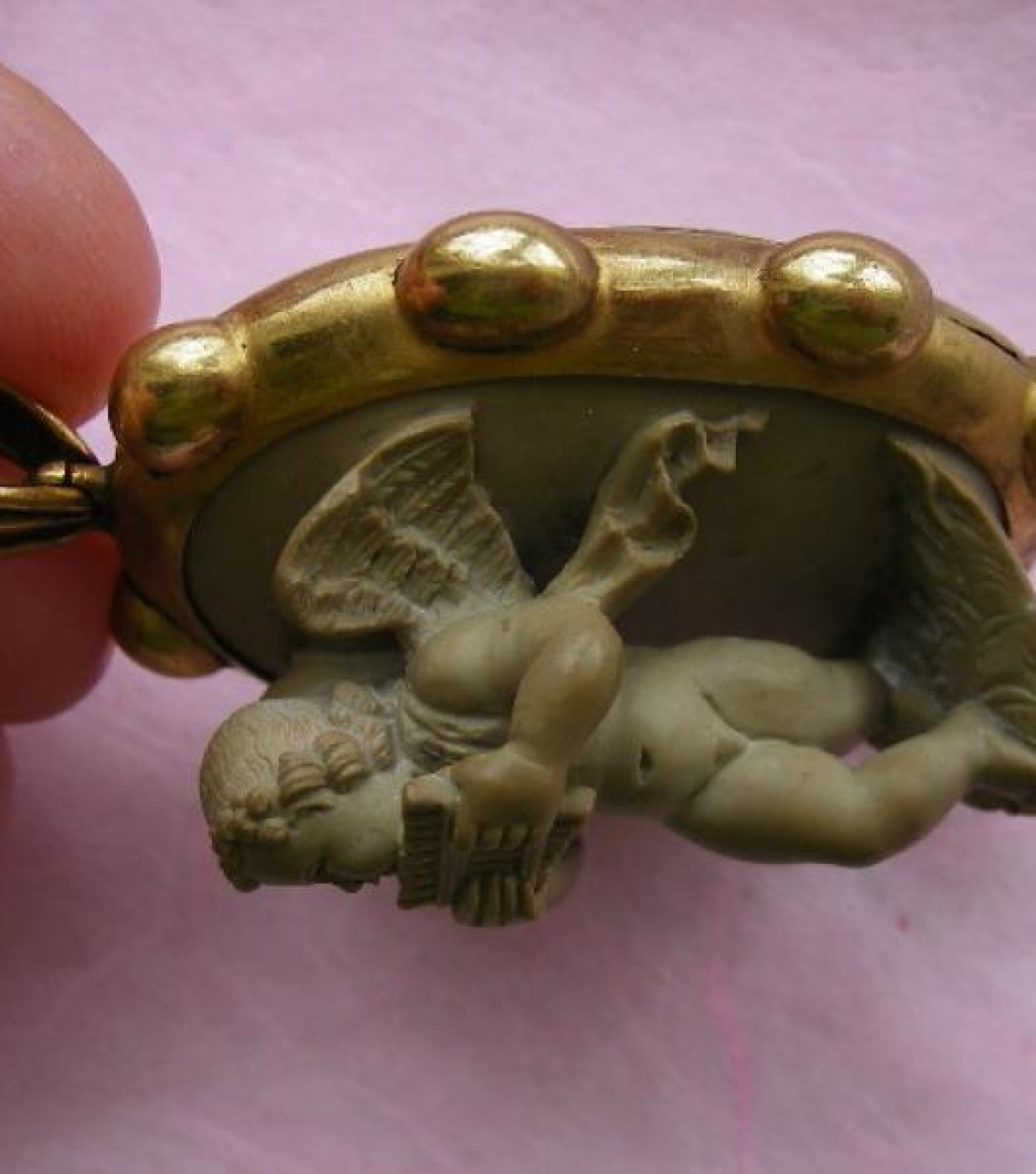 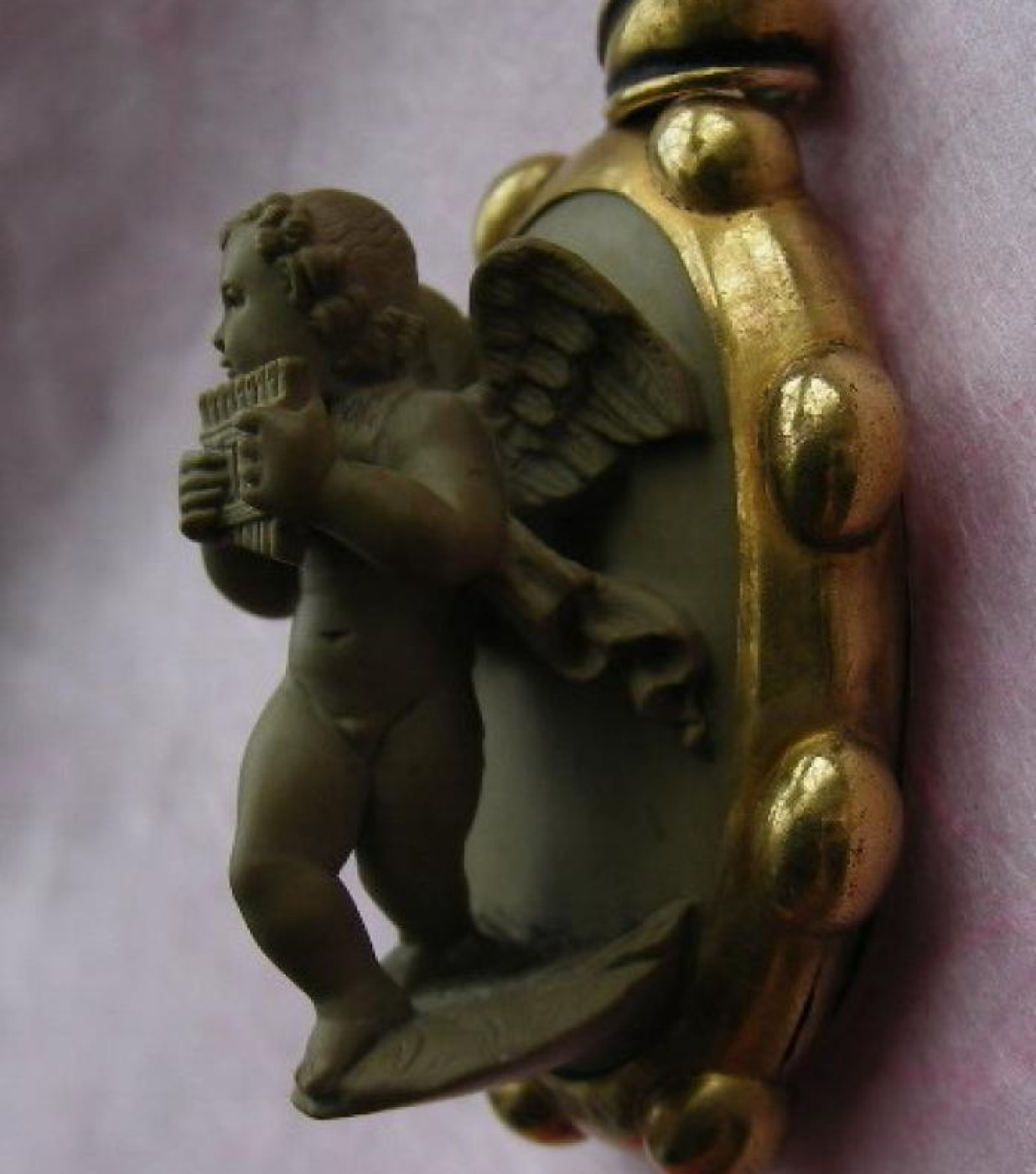 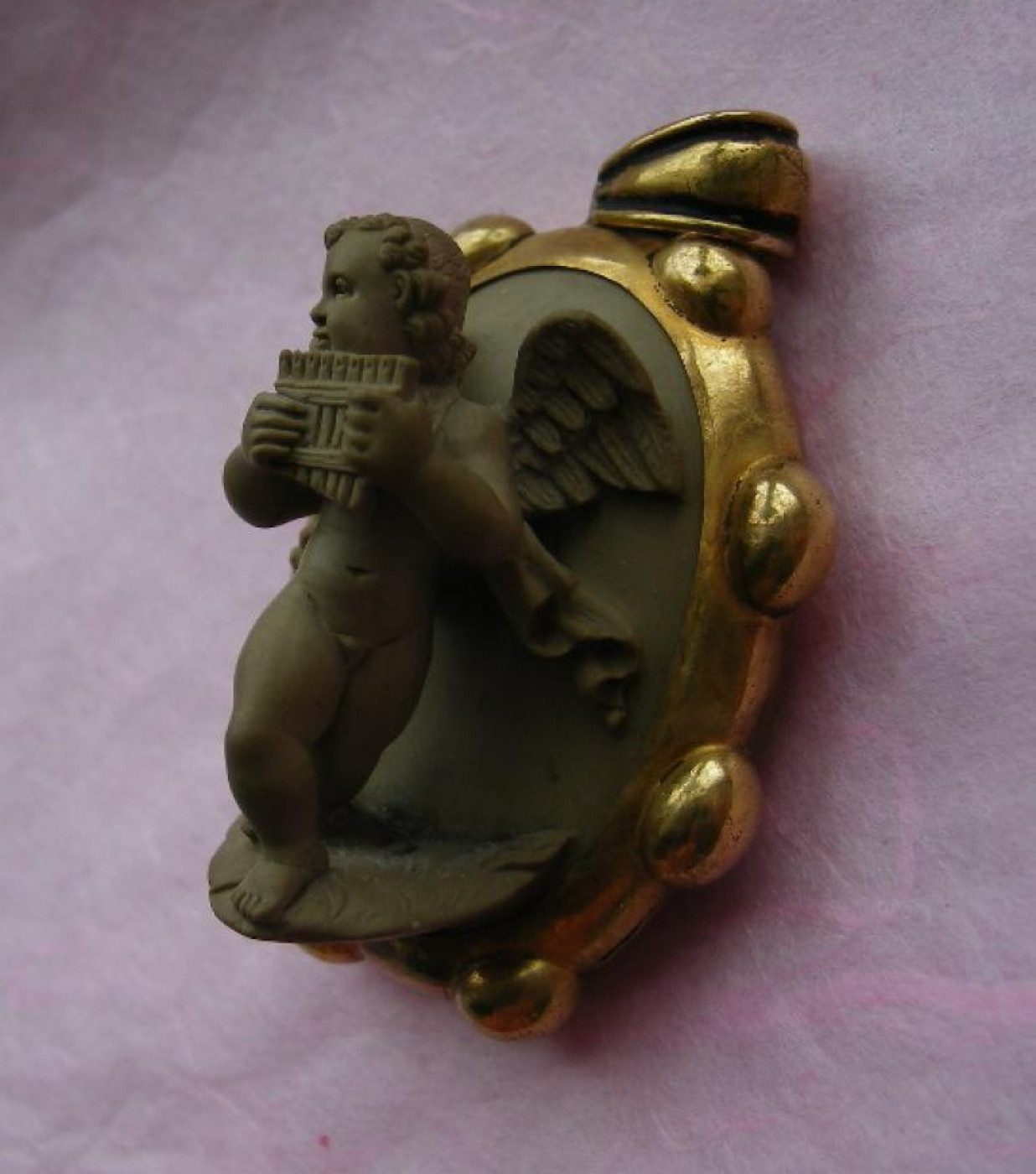 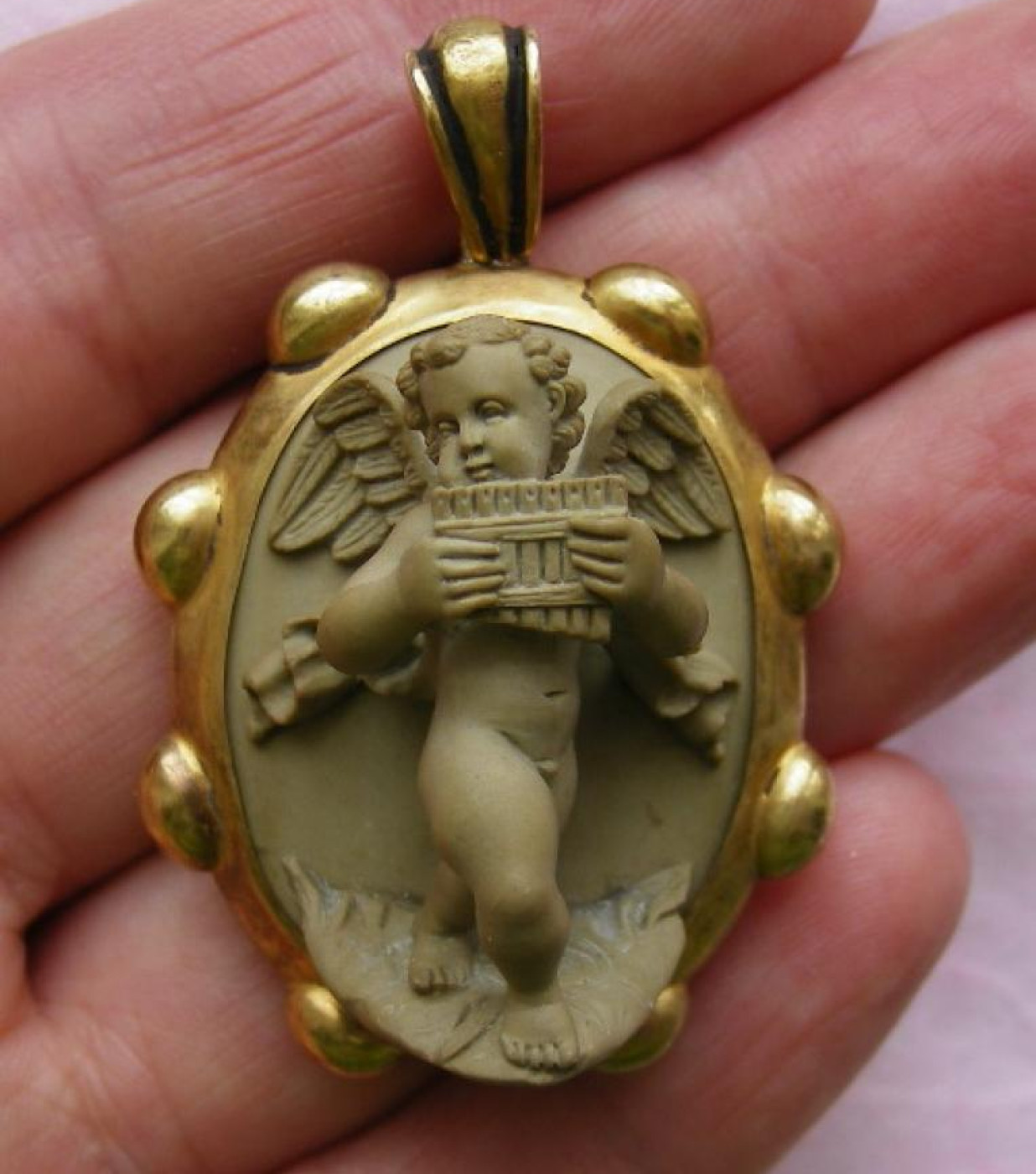 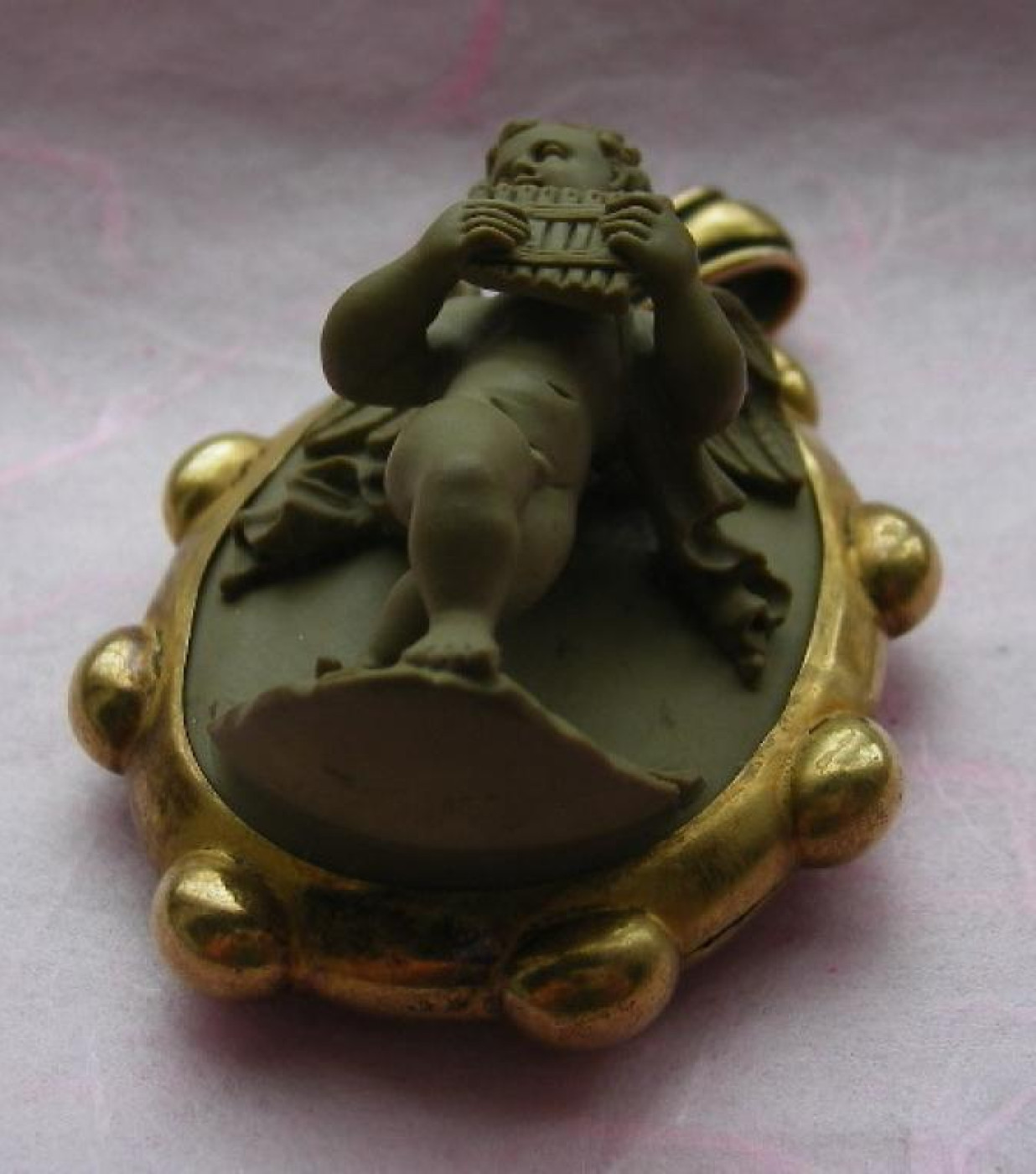 Museum Quality and rarest cameo depicting Cupid playing a Pan Flute. Cupid in the Victorian era was often found in cameos and antique jewellery as the symbol of love. This one is an artwork and in really mint conditions, very rare in a lava cameo being lava very soft and delicate. The proportions of the whole cameo are fantastic and the details crisp and amazing.  The carving is more than superb. Look at the beauty of the whole cameo, isn't it wonderful? All the carving in this cameo is an artwork due to the skill of the carver.  The frame is very particular too with gold half bead all around. On the back there is a glazed compartment, and under the glass a picture of a Victorian lady who maybe was the owner of this cameo. This is with no doubt one of most beautiful lava cameo I have ever handled, the pictures speak by themselves. This is another masterly carved cameo. A very desirable collectors piece, rare and museum quality cameo.
A bit of History:

In Roman mythology, Cupid (Latin cupido) is the god of erotic love and beauty. He is also known by another one of his Latin names, Amor . He is the son of goddess Venus..In popular culture Cupid is frequently shown shooting his bow to inspire romantic love, often as an icon of Valentine's Day.
In the Roman version, Cupid was the son of Venus (goddess of love) and Mars (god of war). In the Greek version he was named Eros and seen as one of the primordial gods (though other myths exist as well). The following story is almost identical in both cultures. Cupid was often depicted with wings, a bow, and a quiver of arrows. When his mother got extremely jealous of the princess Psyche, who was so loved by her subjects that they forgot to worship Venus, she ordered Cupid to make Psyche fall in love with the vilest thing in the world. When Cupid saw Psyche, however, he was so overcome by her astounding beauty that he dropped an arrow on his foot, and so fell in love with her himself. Following that, Cupid visited Psyche every night in his invisible form and told her not to try to see him. Psyche, though, incited by her two older sisters who told her Cupid was a monster, tried to look at him and angered Cupid. When he left, she looked all over the known world for him until at last the leader of the gods, Jupiter, gave Psyche the gift of immortality so that she could be with him. Together they had a daughter, Voluptus, or Hedone, (meaning pleasure) and Psyche became a goddess of the soul.