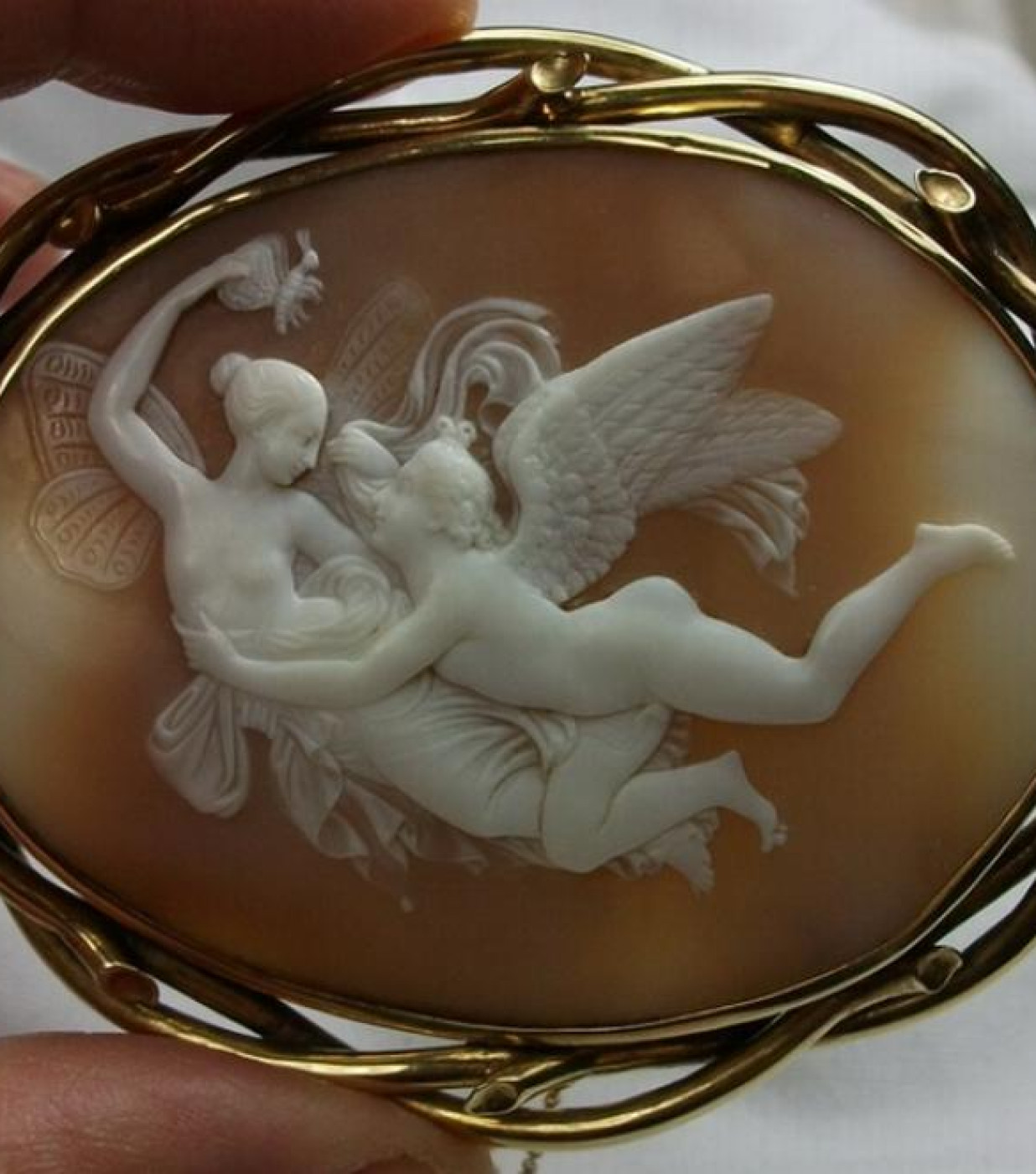 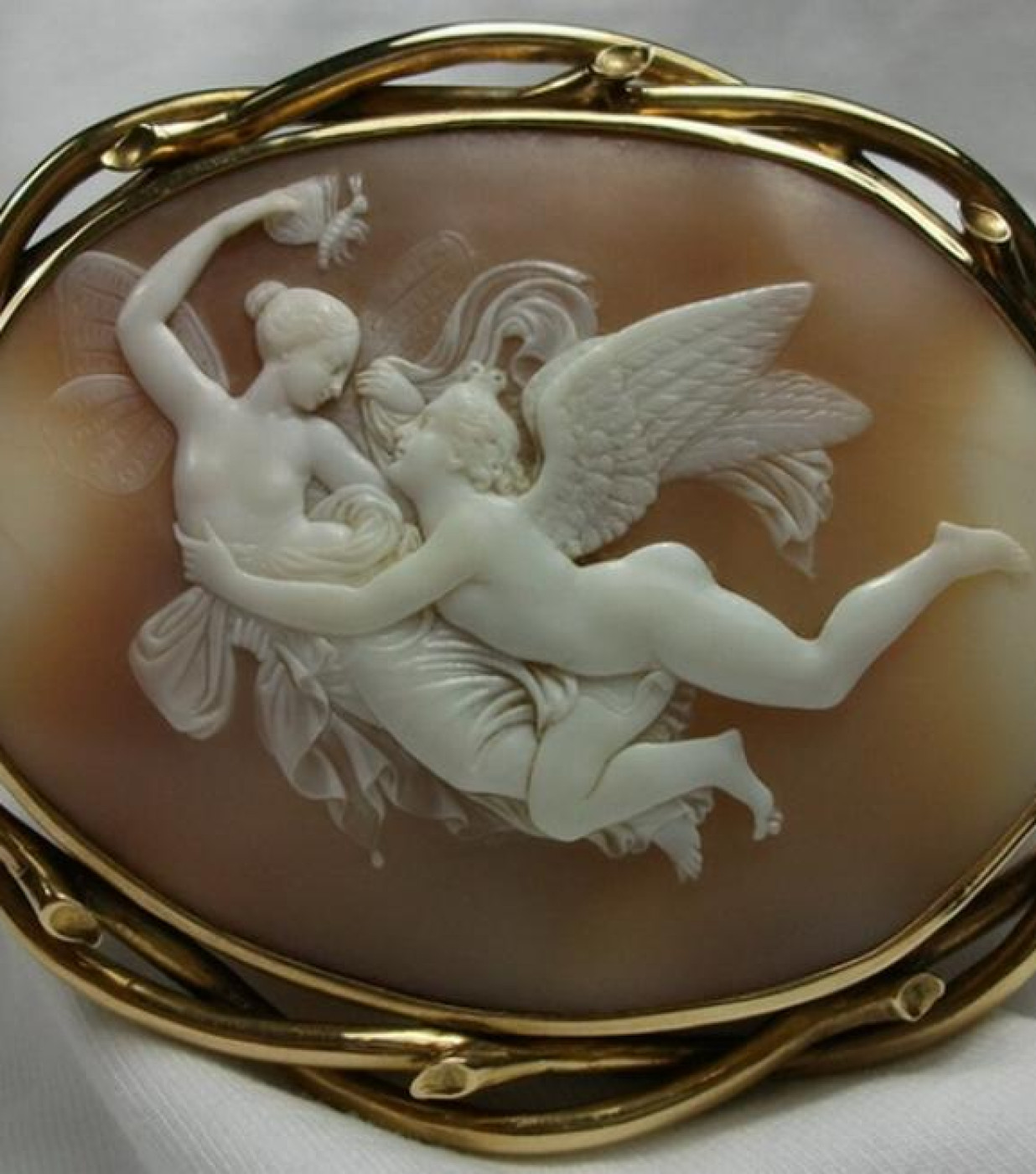 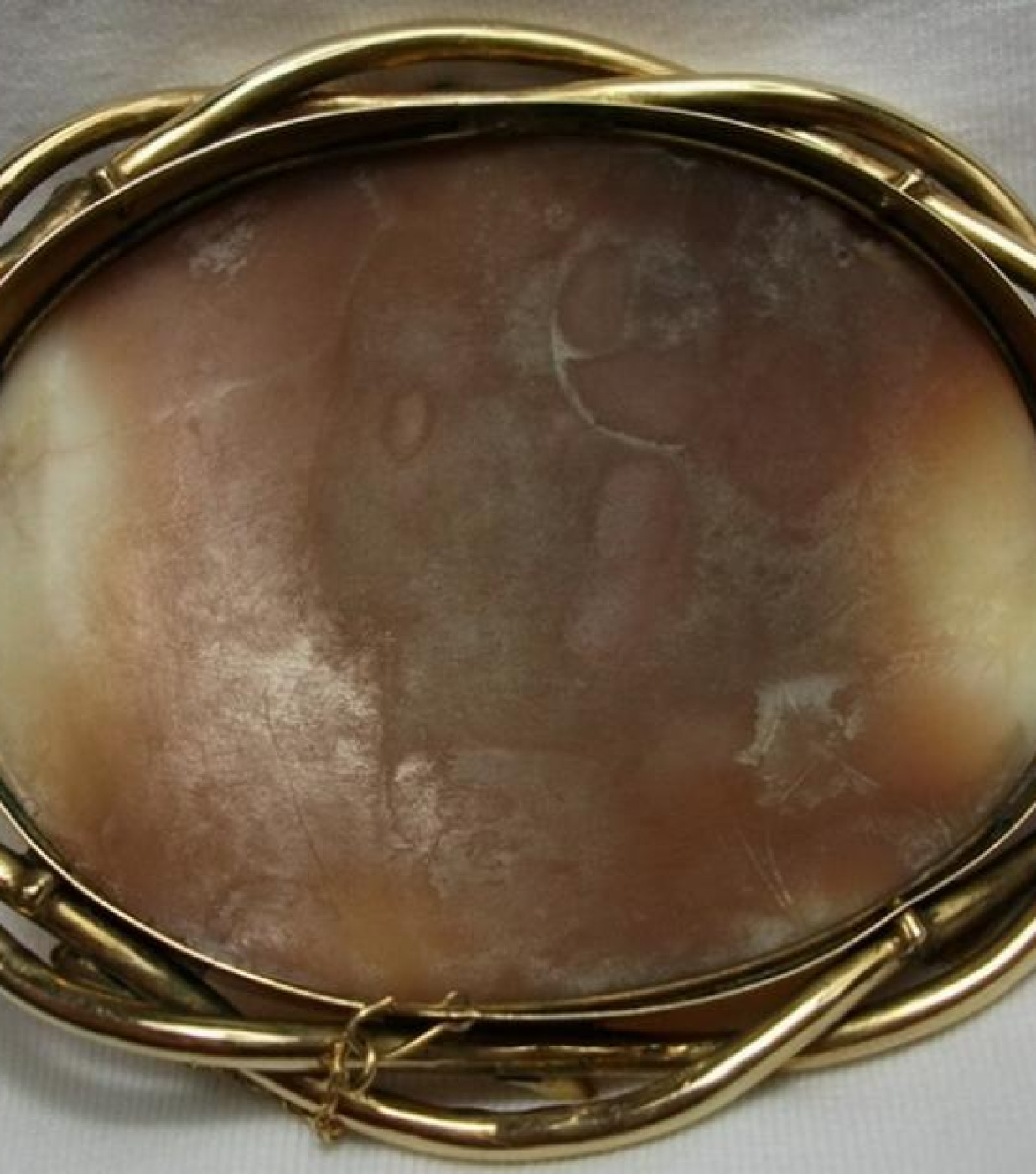 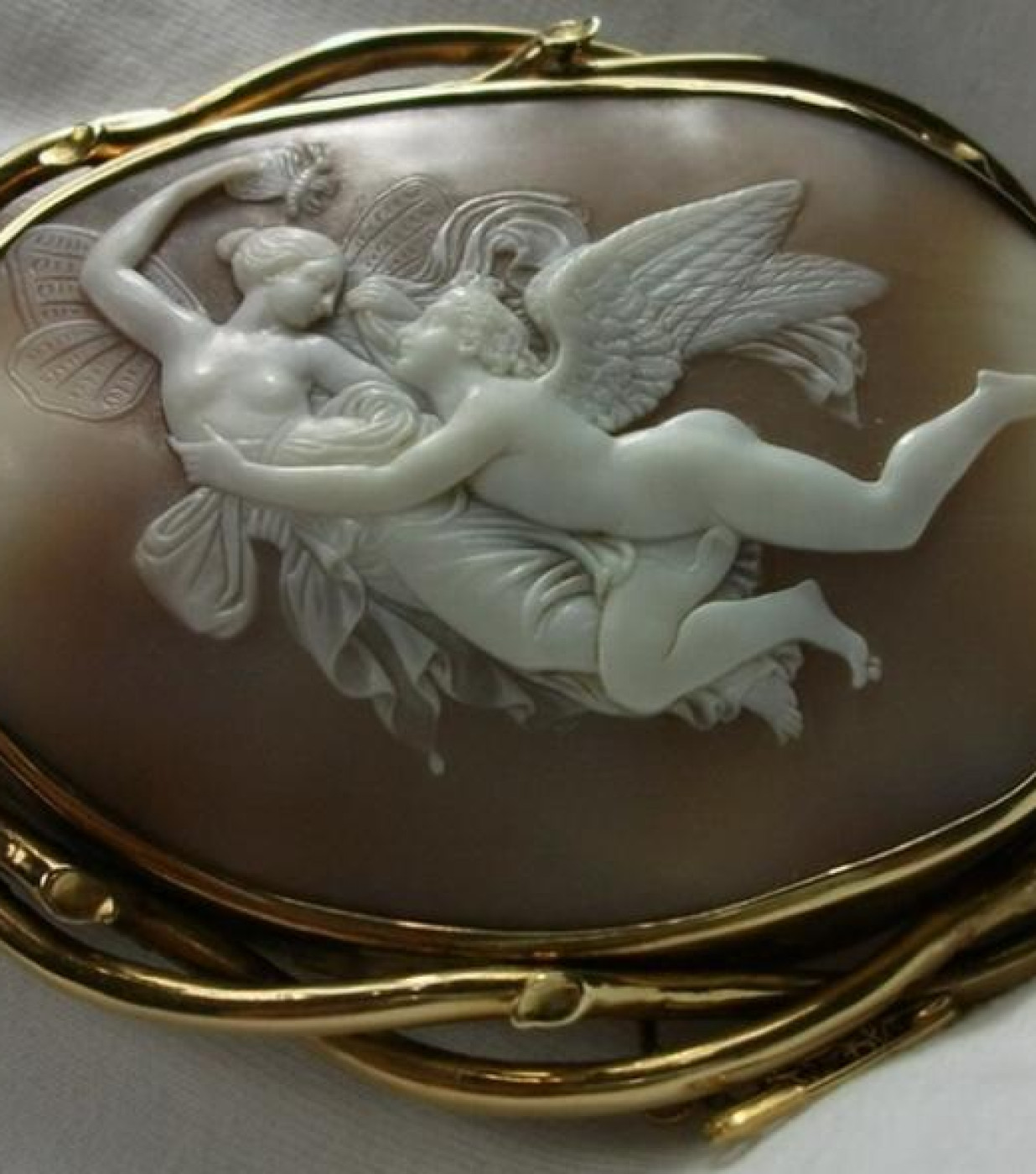 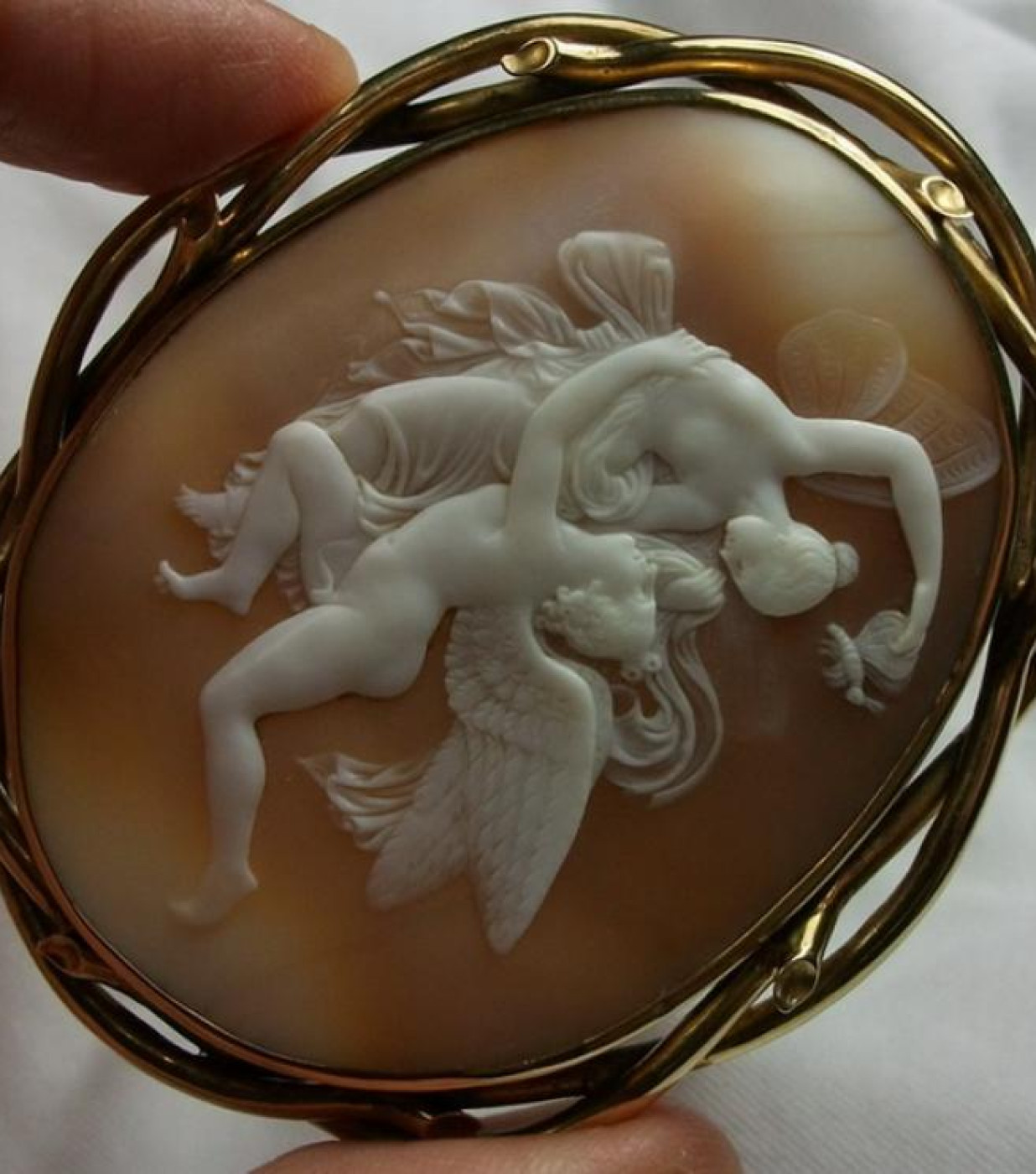 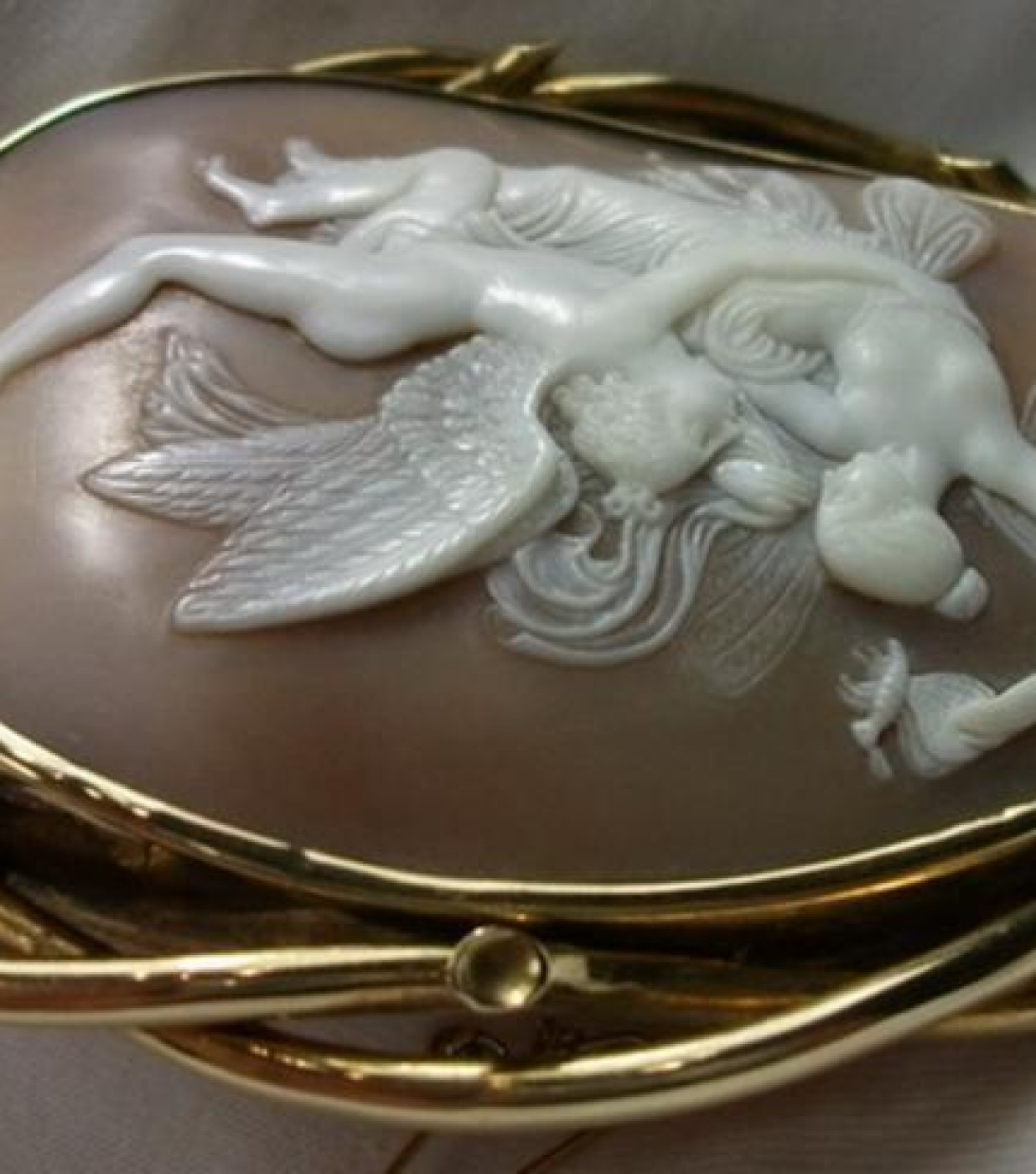 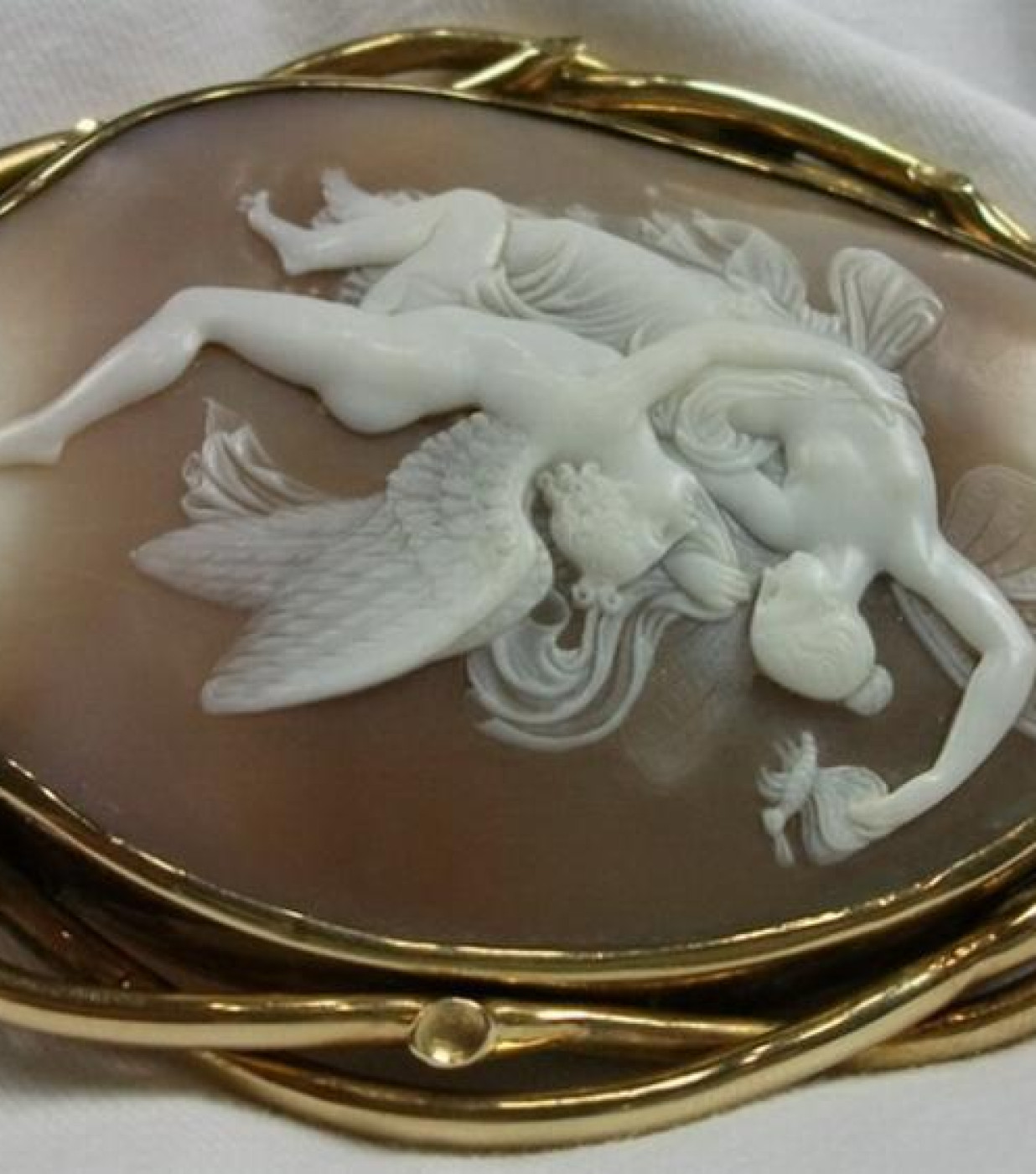 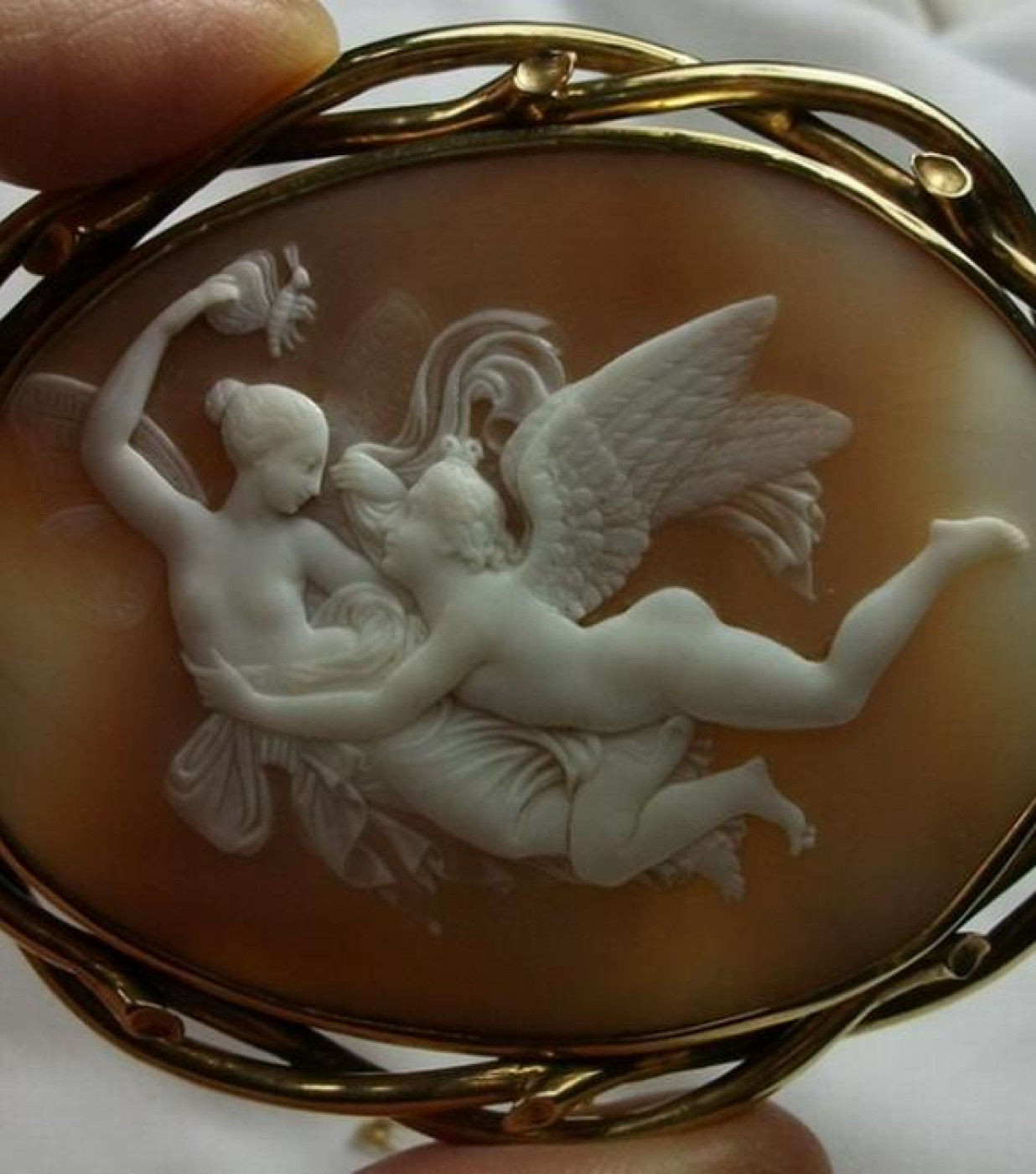 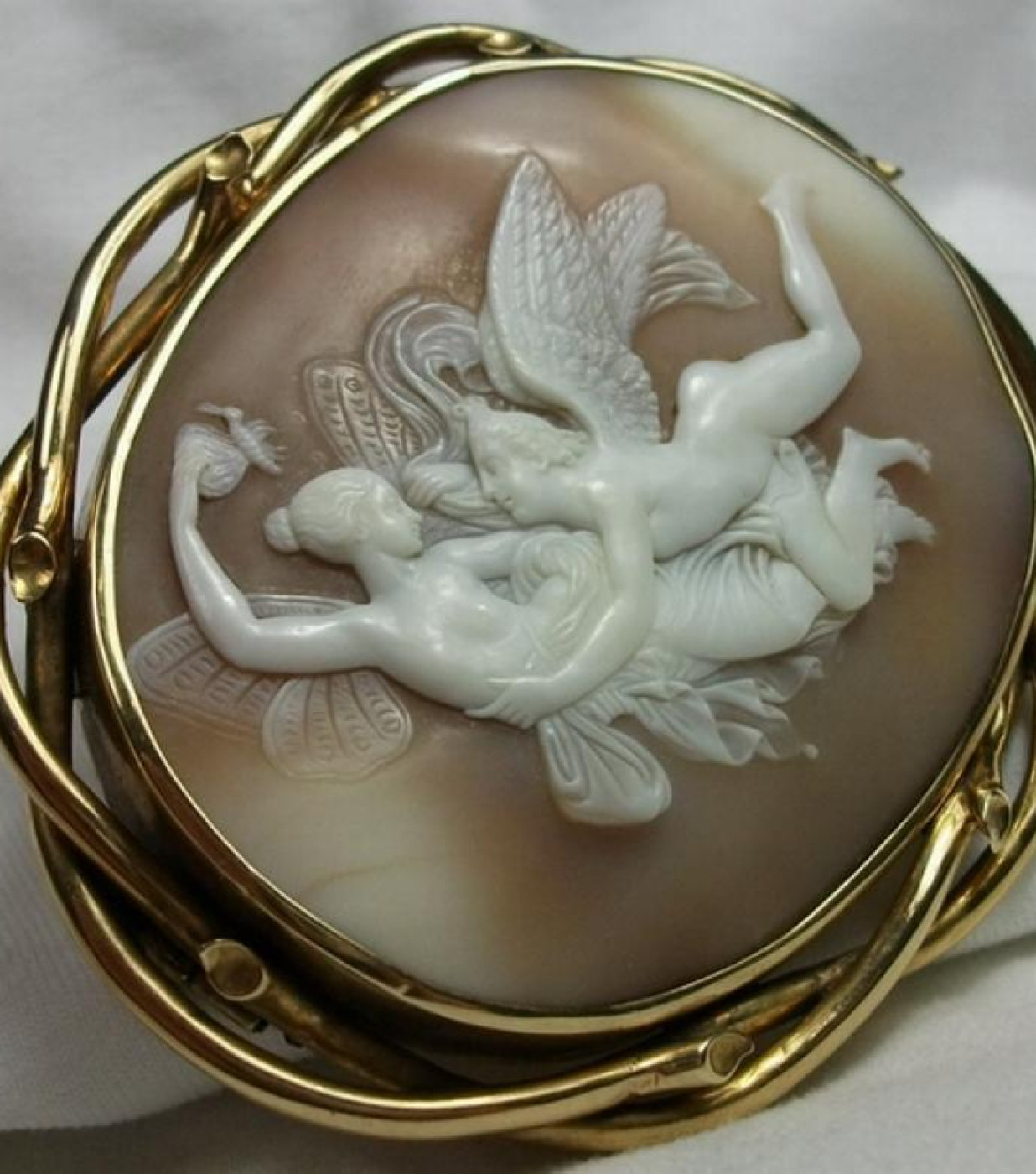 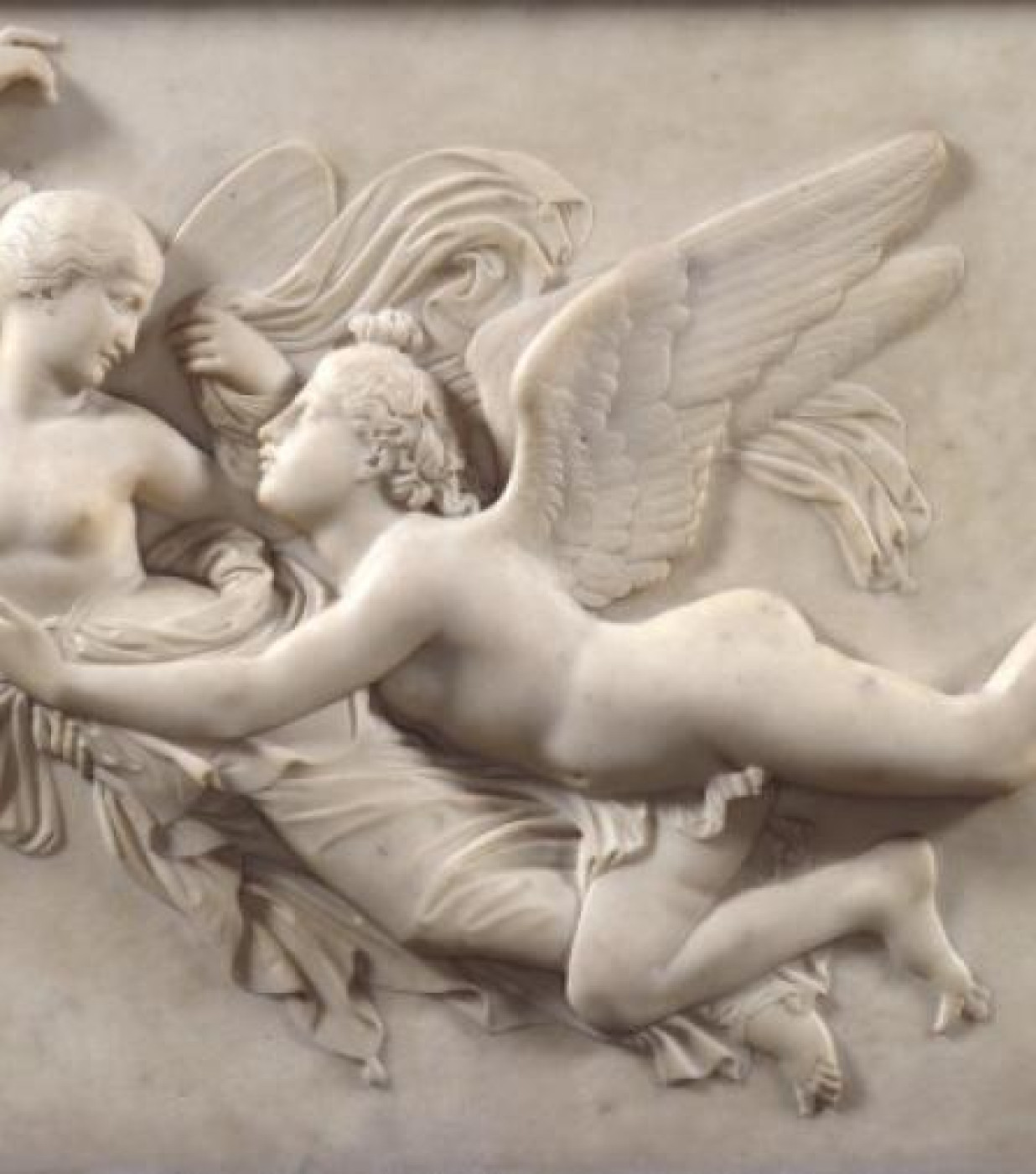 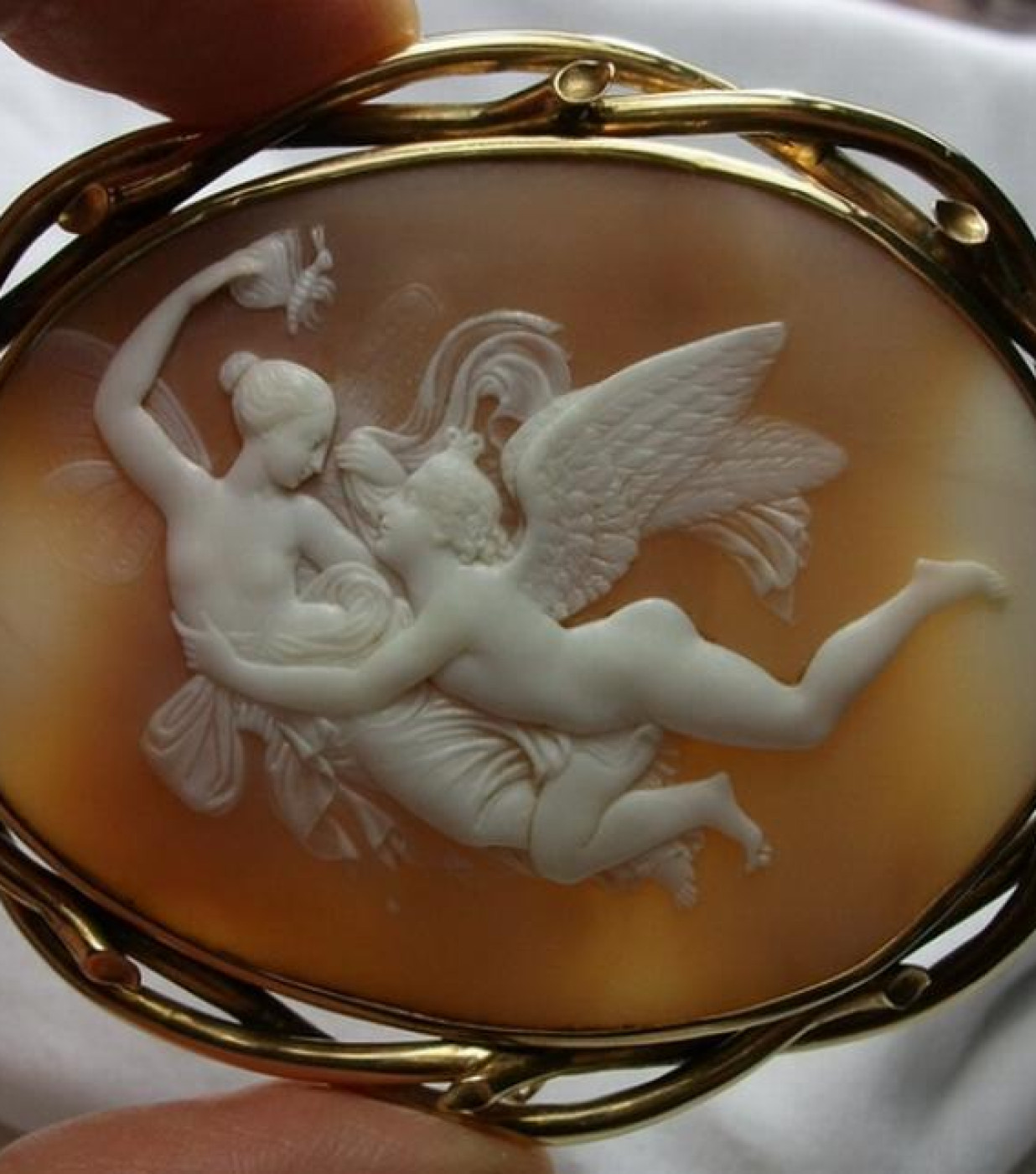 Highest Museum Quality cameo depicting Cupid and Psyche after a sculpture of John Gibson made in 1844 for the Queen Victoria now in the Royal Academy of Arts in London. This one is a real artwork in my opinion, so crisply carved and so well made. Each detail of the sculpture, which is shown below, has been reproduced perfectly on the cameo. A thing that I have noticed, not only in this cameo but even on another one depicting the same subject which I have had, is that carvers have added a butterfly which is held by Psyche's hand that is not shown in the sculpture. Butterfly is the symbol of Psyche and represents the soul. Look how Cupid holds Psyche and how he is watching at her, this cameo sends out LOVE and it is really touching.  The two lovers strictly hug are just the expression of the eternal love.  The harmony between the two bodies is total. Everything in this cameo speaks about love and harmony. Another masterly carved cameo. A very desirable collectors piece, rare and museum quality cameo.
A bit of History:

This is the story of Cupid and Psyche, found in the novel, 'Metamorphoses' written by the 2nd century AD novelist and rhetorician, Apuleius. Once upon a time there was a king with three daughters. They were all beautiful, but by far the most beautiful was the youngest, Psyche. She was so beautiful that people began to neglect the worship of Venus, the goddess of love and beauty. Venus was very jealous, and asked her son Cupid (the boy with the arrows) to make Psyche fall in love with a horrible monster. When he saw how beautiful she was, Cupid dropped the arrow meant for her and pricked himself, and fell in love with her. Despite her great beauty no-one wanted to marry Psyche. Her parents consulted an oracle, and were told that she was destined to marry a monster, and they were to take her to the top of a mountain and leave her there. The west wind took her and wafted her away to a palace, where she was waited on by invisible servants. When night came her new husband visited her, and told her that he would always visit her by night and she must never try to see him. Although her invisible husband was kind and gentle with her, and the invisible servants attended to her every desire, Psyche grew homesick. She persuaded her husband to allow her sisters to visit her. When they saw how she lived they became very jealous and talked Psyche into peeking at her husband, saying that he was a monster who was fattening her up to be eaten and that her only chance of safety was to kill him. Psyche took a lamp and a knife, but when she saw her beautiful husband, Cupid, she was so surprised she dripped some hot wax onto his shoulder, waking him. He took in the situation at a glance and immediately left Psyche and the magnificent palace she had been living in disappeared in a puff of smoke. Psyche roamed about looking for her husband, and eventually in desperation approached his mother, Venus. Still angry, the goddess set various tasks for Psyche, all of which she passed, with a bit of help from ants and river gods. At last Cupid found out what was going on, and he persuaded Jupiter to order Venus to stop her persecution of Psyche. Then they were married and lived happily ever after - and it really was ever after since Psyche was made a goddess.