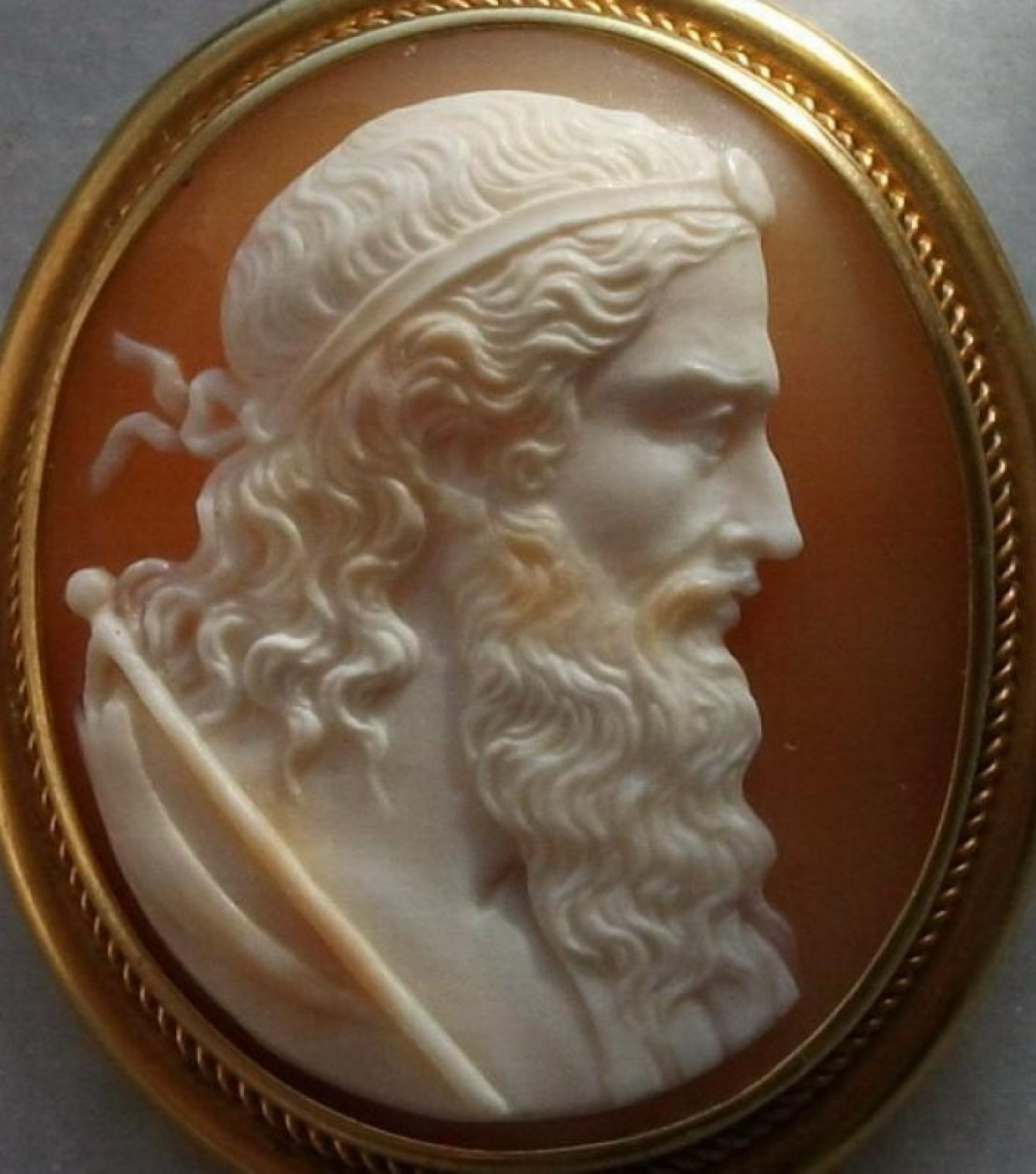 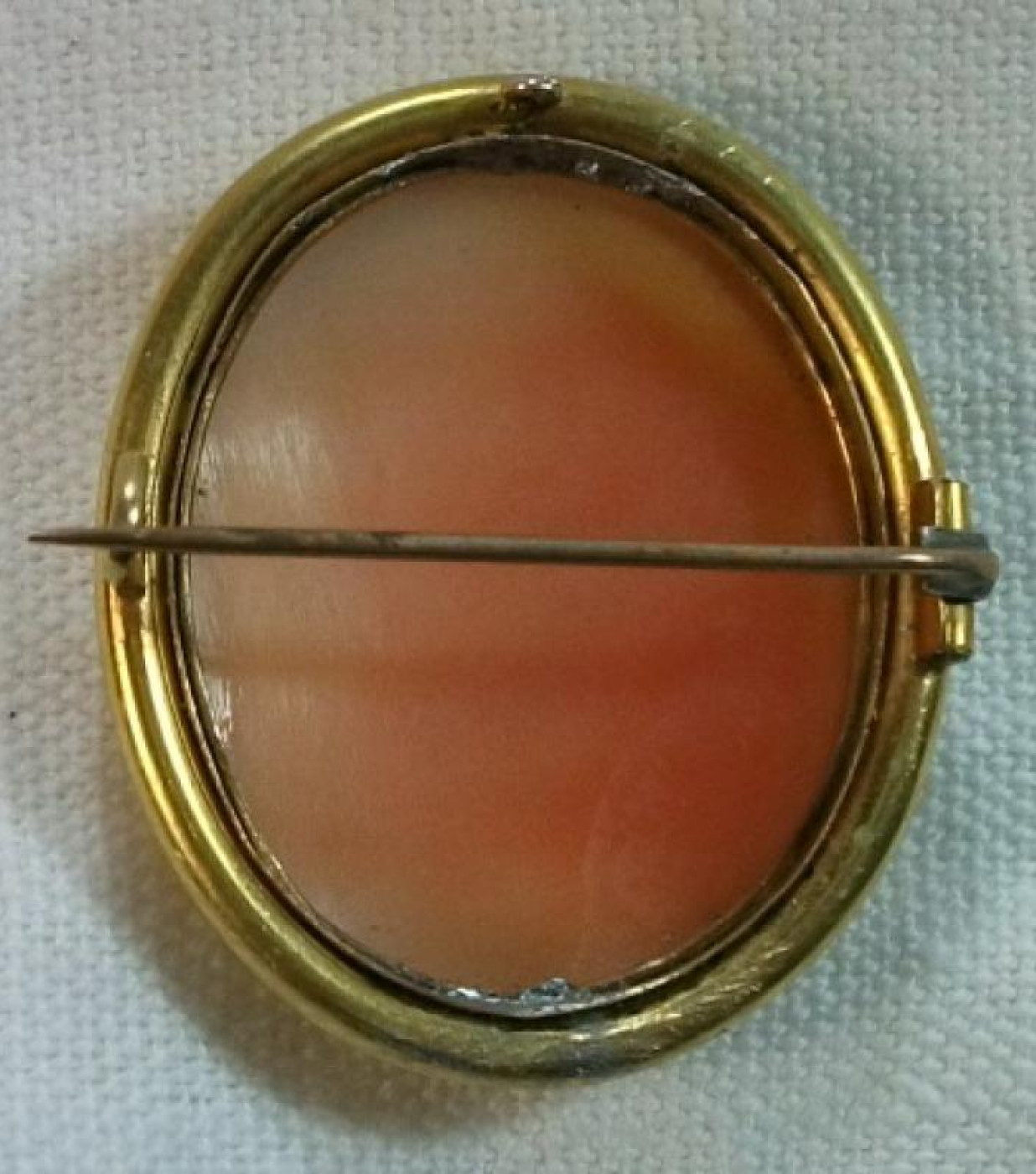 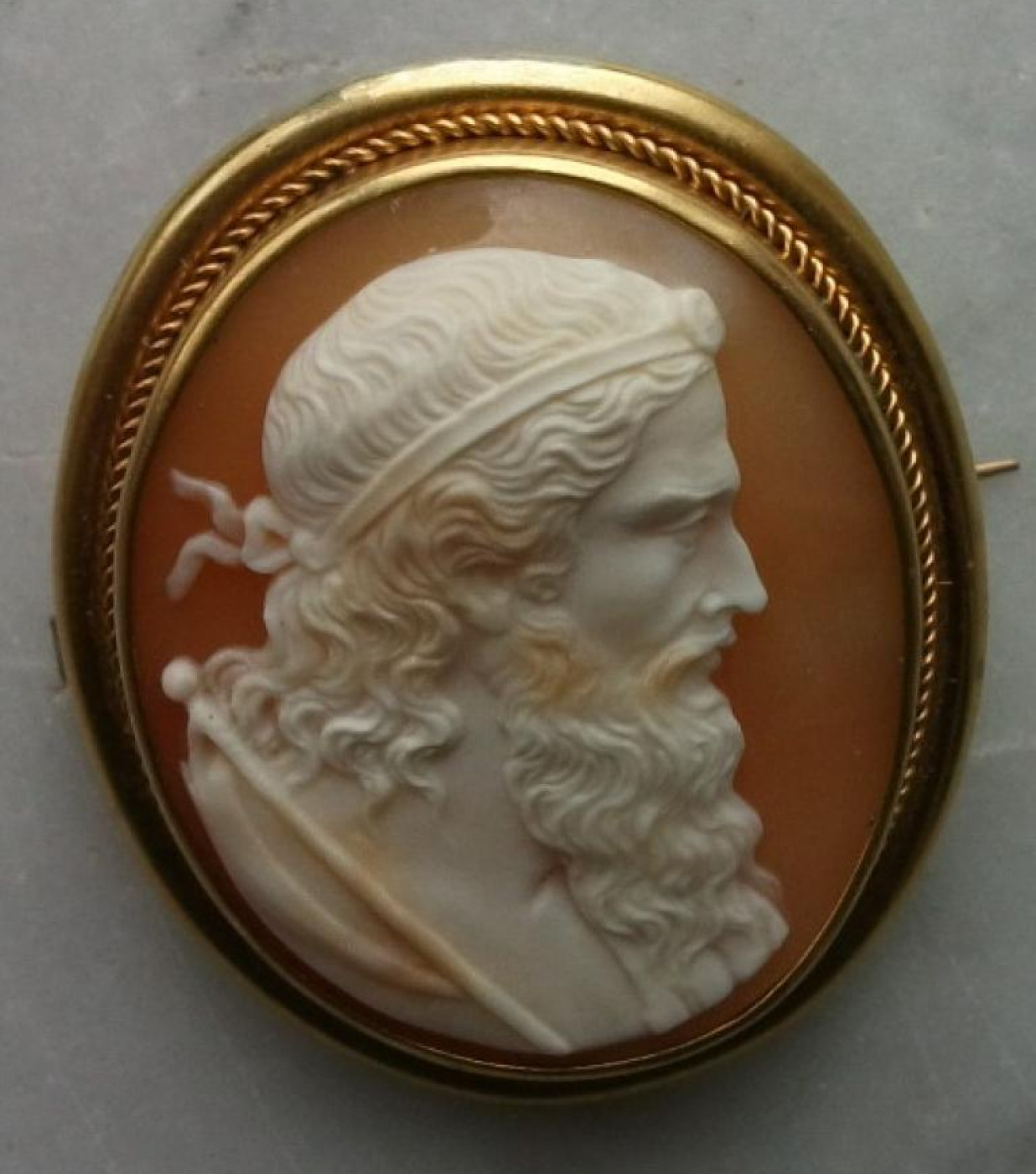 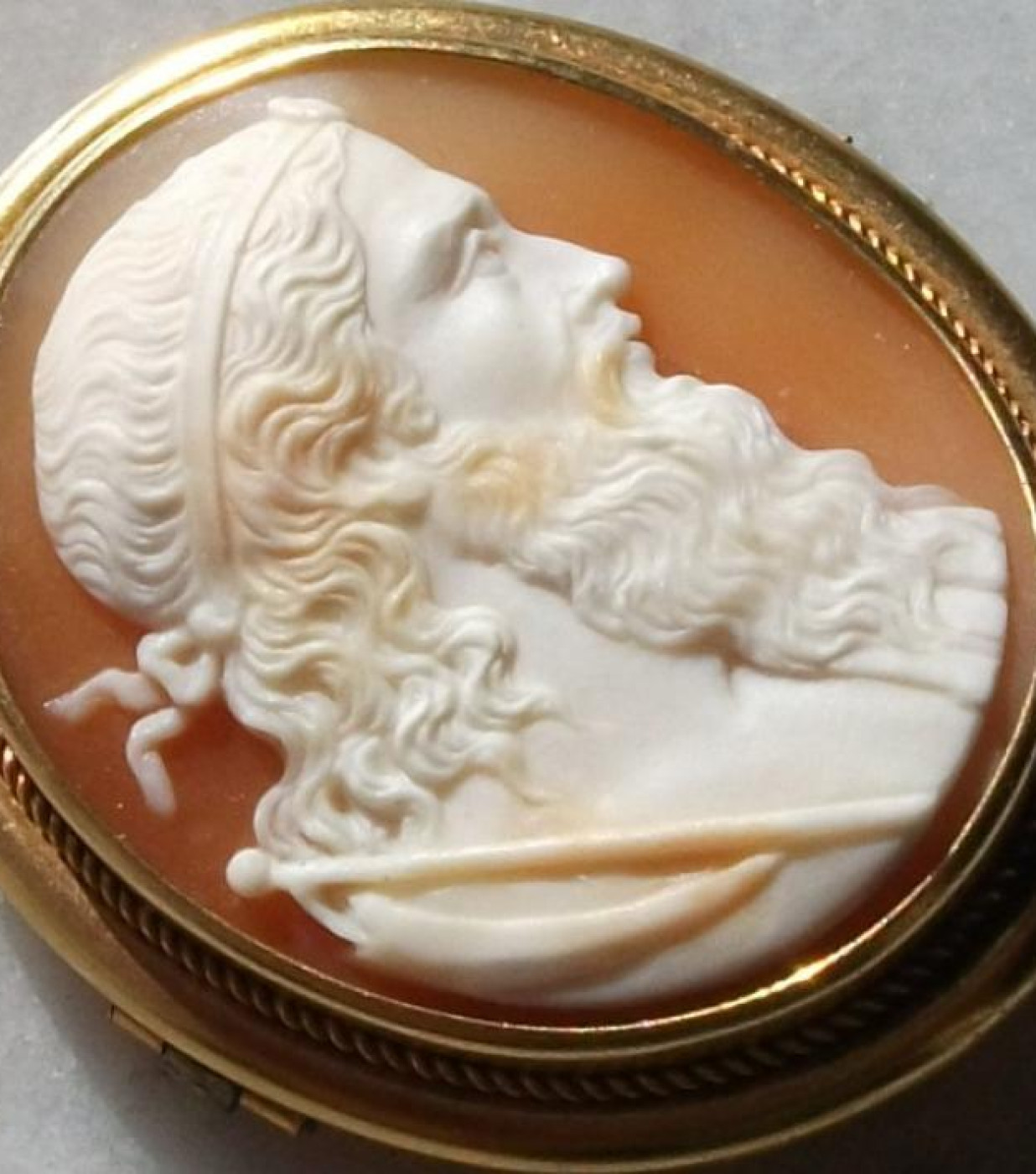 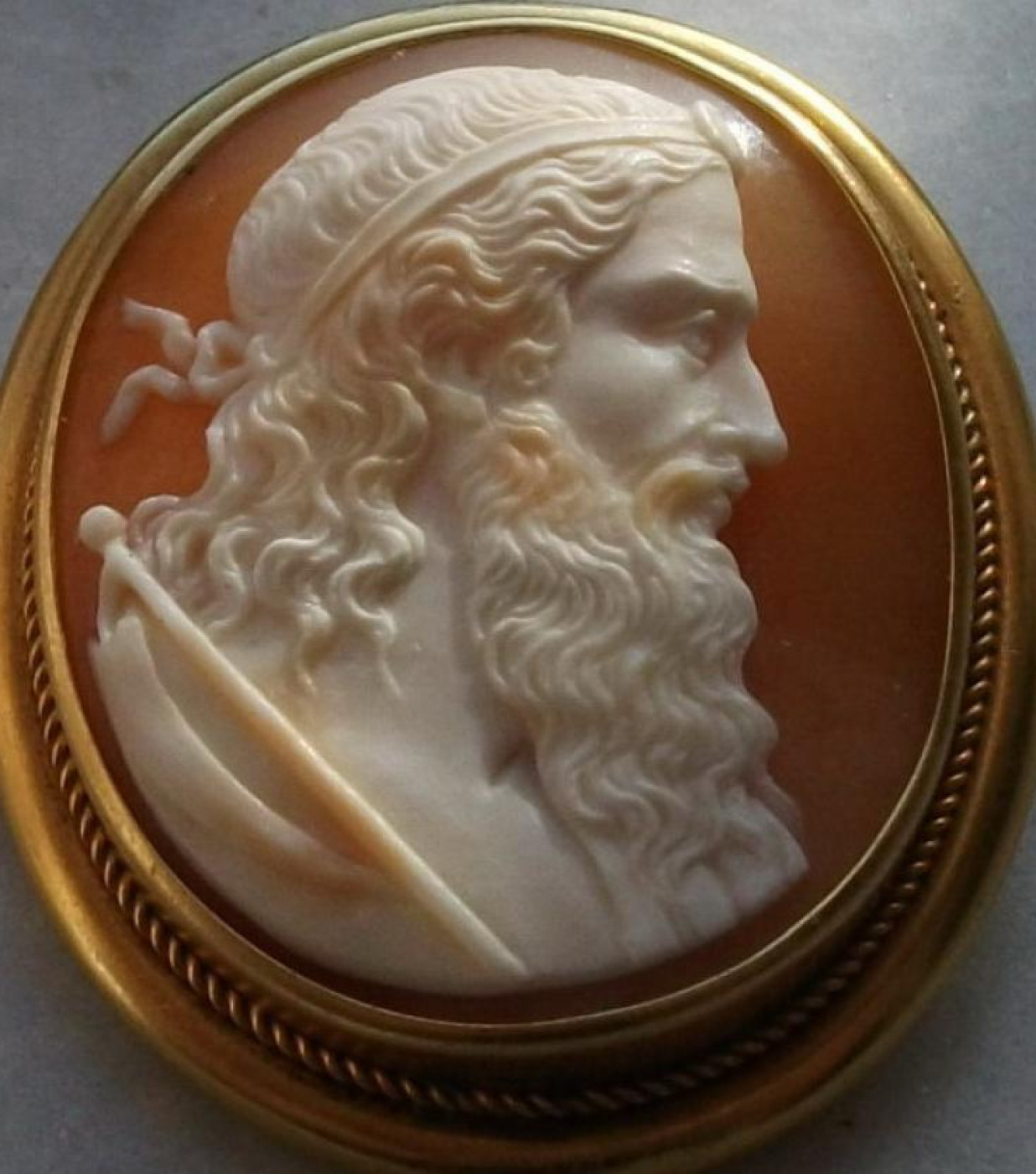 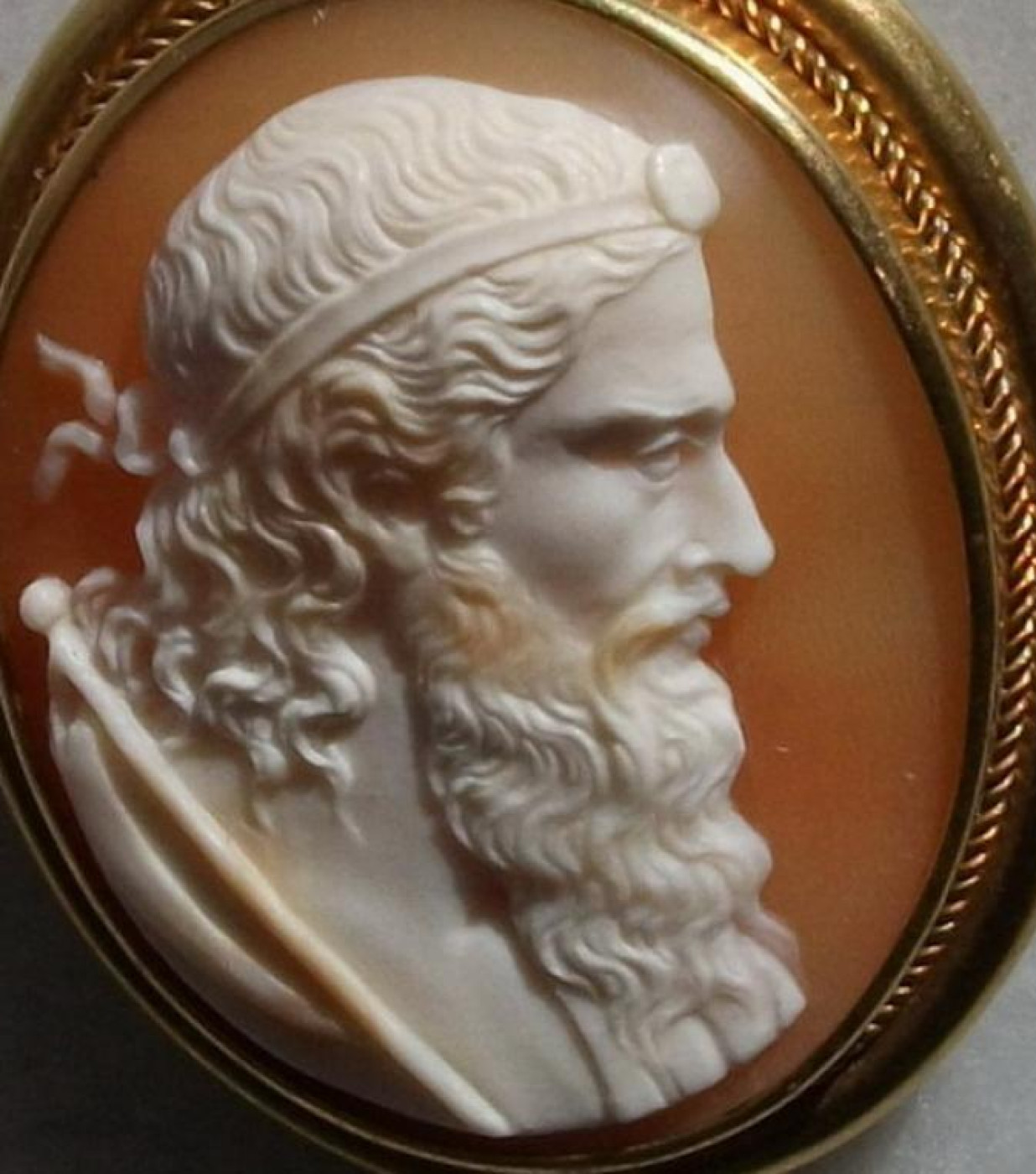 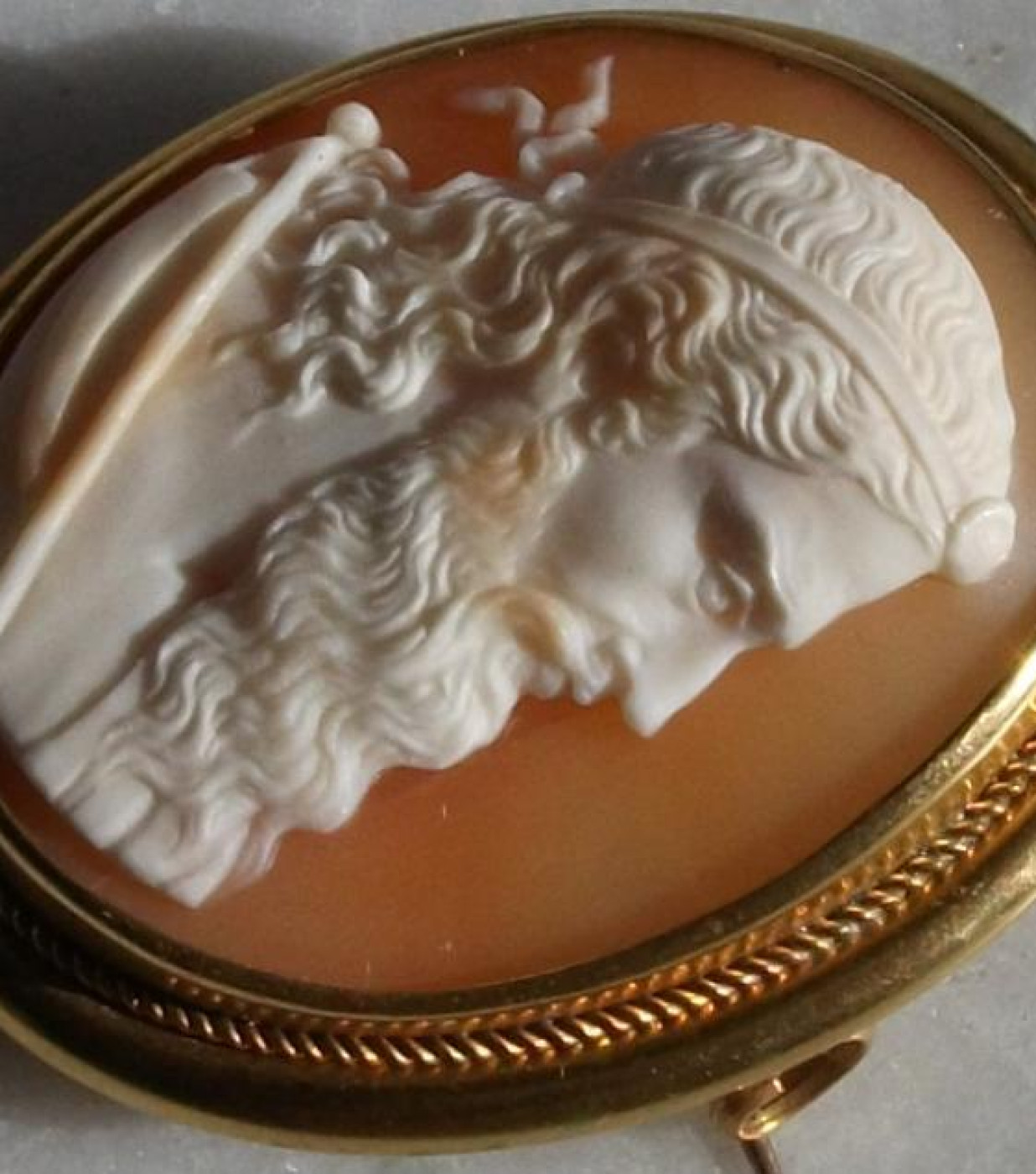 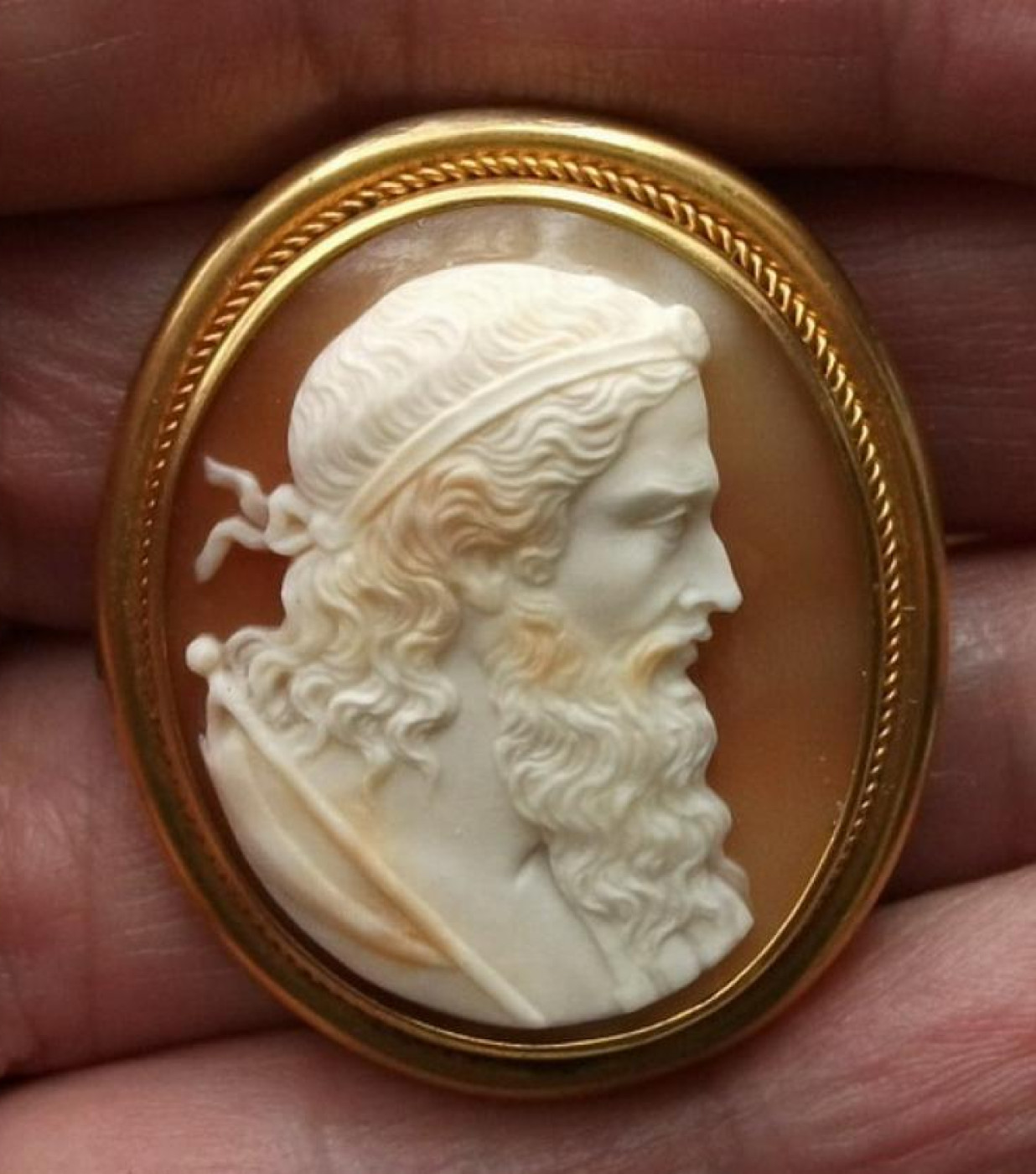 Museum quality cameo of a rarest subject Cronos or Cronus. The sickle, his symbol, is clearly visible. Despite of the small size this cameo is superbly carved. It is not easy to find small cameos carved like this one. A very rare find.This is a cameo of surpassing beauty, carved by an artist. Every details is perfectly rendered making this cameo a real work of art. The wrinkles around his eye and on his forehead, his hollow face, his nose so naturally rendered, his live expression, everything makes this cameo amazing even thinking that a such artwork was made on a small shell.  It is not easy to find small cameos of a such high quality. Pictures really don't give any justice to this beautiful piece. This is another masterly carved cameo. A very desirable collectors piece, rare and museum quality cameo.
A bit of History:

Cronus, Kronos or Cronos (Not to be confused with Chronos, the personification of time) was the leader and the youngest of the first generation of Titans, divine descendants of Gaia, the earth, and Uranus, the sky. He overthrew his father and ruled during the mythological Golden Age, until he was overthrown by his own sons, Zeus, Hades, and Poseidon, and imprisoned in Tartarus. As a result of his association with the virtuous Golden Age, Cronus was worshipped as a harvest deity, overseeing crops such as grains, nature and agriculture. He was usually depicted with a sickle, which he used to harvest crops and which was also the weapon he used to castrate and depose Uranus. In Athens, on the twelfth day of the Attic month of Hekatombaion, a festival called Kronia was held in honor of Cronus to celebrate the harvest. Cronus was also identified in classical antiquity with the Roman deity Saturn. In ancient myths, Cronus envied the power of his father, the ruler of the universe, Uranus. Uranus drew the enmity of Cronus' mother, Gaia, when he hid the gigantic youngest children of Gaia, the hundred-armed Hecatonchiresand one-eyed Cyclopes, in Tartarus, so that they would not see the light. Gaia created a great adamant sickle and gathered together Cronus and his brothers to persuade them to castrate Uranus. Only Cronus was willing to do the deed, so Gaia gave him the sickle and placed him in ambush. When Uranus met with Gaia, Cronus attacked him with the sickle by cutting off his genitals, castrating him and casting the severed member into the sea. From theblood  that spilled out from Uranus and fell upon the earth, the Gigantes, Erinyes, and Meliae were produced. From the member that was cast into the sea, Aphrodite (Venus) later emerged.
After dispatching Uranus, Cronus re-imprisoned the Hecatonchires, the Gigantes, and the Cyclopes and set the dragon Campe to guard them. He and his sister Rhea took the throne of the world as king and queen. This period of Cronus' rule was called the Golden Age, as the people of the time had no need for laws or rules; everyone did the right thing, and immorality was absent. Cronus learned from Gaia and Uranus that he was destined to be overcome by his own son, just as he had overthrown his father. As a result, although he sired the gods Demeter, Hera, Hades,Hestia, and Poseidon by Rhea, he swallowed them all as soon as they were born to preempt the prophecy. When the sixth child, Zeus, was born Rhea sought Gaia to devise a plan to save them and to eventually get retribution on Cronus for his acts against his father and children. Rhea secretly gave birth to Zeus in Crete, and handed Cronus a stone wrapped in swaddling clothes, also known as the Omphalos Stone, which he promptly swallowed, thinking that it was his son. Rhea kept Zeus hidden in a cave on Mount Ida, Crete. According to some versions of the story, he was then raised by a goat named Amalthea, while a company of Kouretes, armored male dancers, shouted and clapped their hands to make enough noise to mask the baby's cries from Cronus. Other versions of the myth have Zeus raised by the nymph Adamanthea, who hid Zeus by dangling him by a rope from a tree so that he was suspended between the earth, the sea, and the sky, all of which were ruled by his father, Cronus. Still other versions of the tale say that Zeus was raised by his grandmother, Gaia. Once he had grown up, Zeus used a poison given to him by Gaia to force Cronus to disgorge the contents of his stomach in reverse order: first the stone, which was set down at Pytho under the glens of Mount Parnassus to be a sign to mortal men, then the goat, and then his two brothers and three sisters.  After freeing his siblings, Zeus released the Gigantes, the Hecatonchires, and the Cyclopes, who forged for him his thunderbolts. In a vast war called the Titanomachy, Zeus and his brothers and sisters, with the help of the Gigantes, Hecatonchires, and Cyclopes, overthrew Cronus and the other Titans. Afterwards, many of the Titans were confined in Tartarus. Some Titans were not banished to Tartarus. Atlas, Epimetheus, Menoetius, Oceanus and Prometheus are examples of Titans who were not imprisoned in Tartarus following the Titanomachy. Gaia bore the monster Typhon to claim revenge for the imprisoned Titans, though Zeus was victorious. Accounts of the fate of Cronus after the Titanomachy differ. In Homeric and other texts he is imprisoned with the other Titans in Tartarus. In Orphic poems, he is imprisoned for eternity in the cave of Nyx.