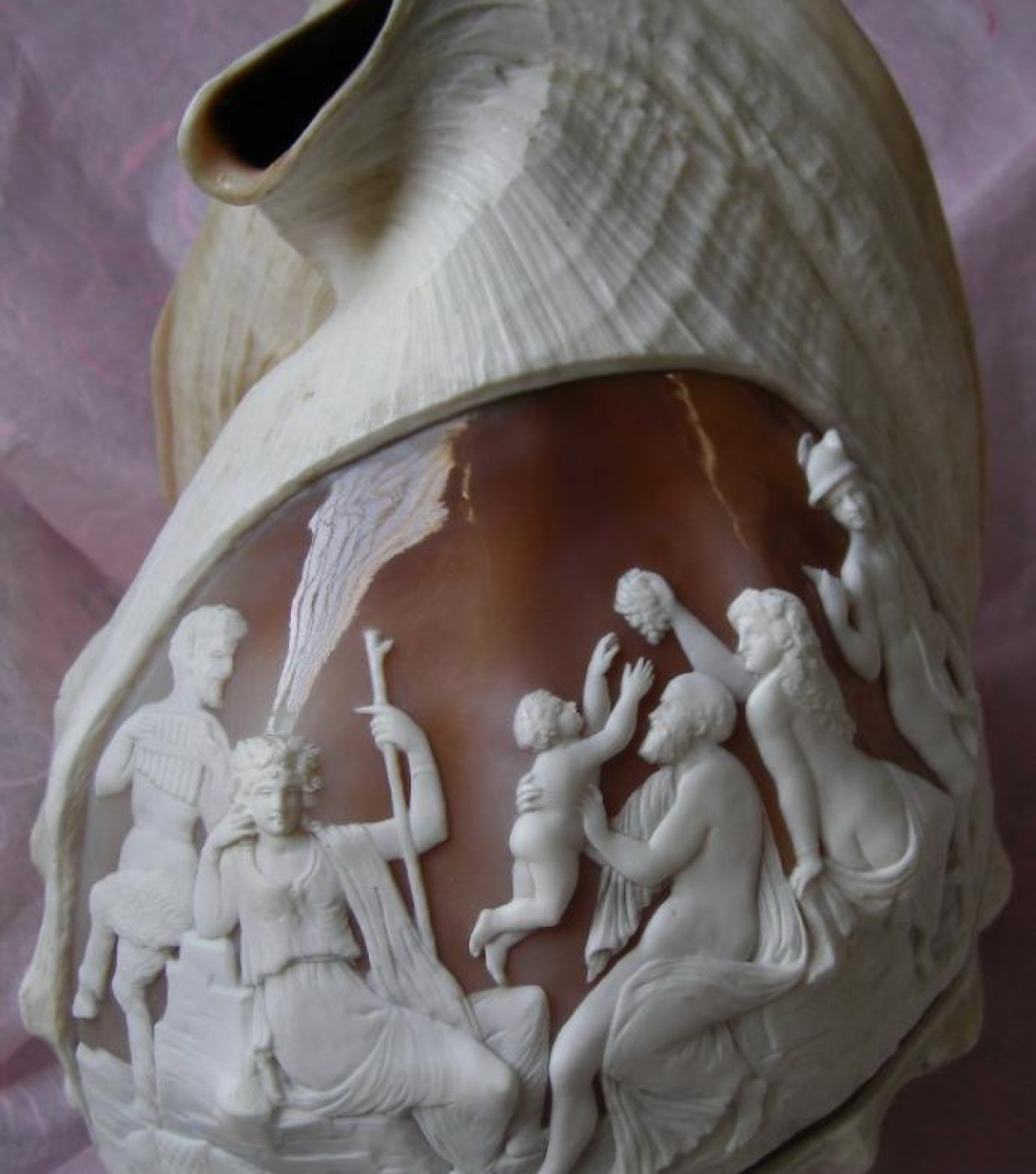 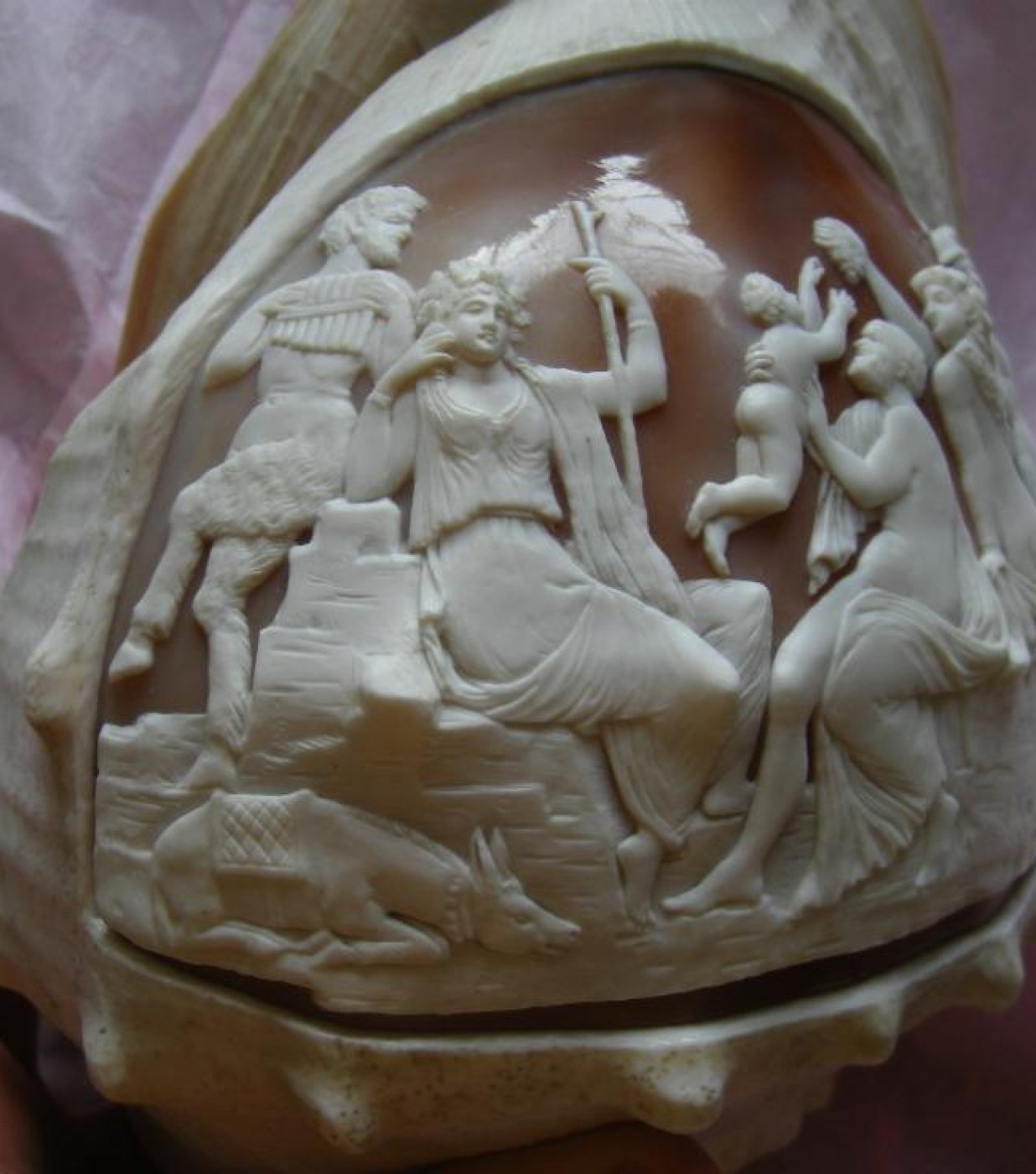 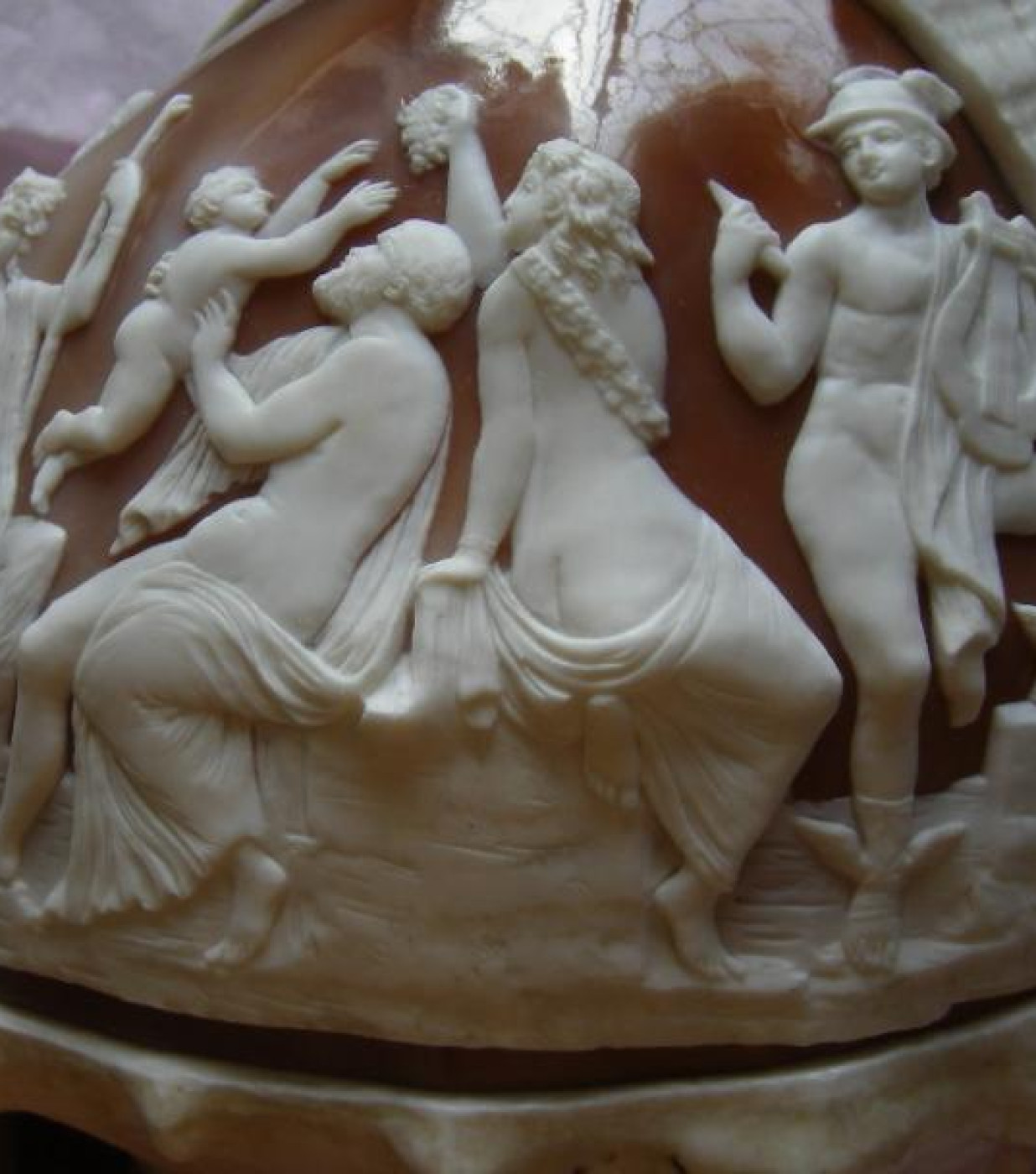 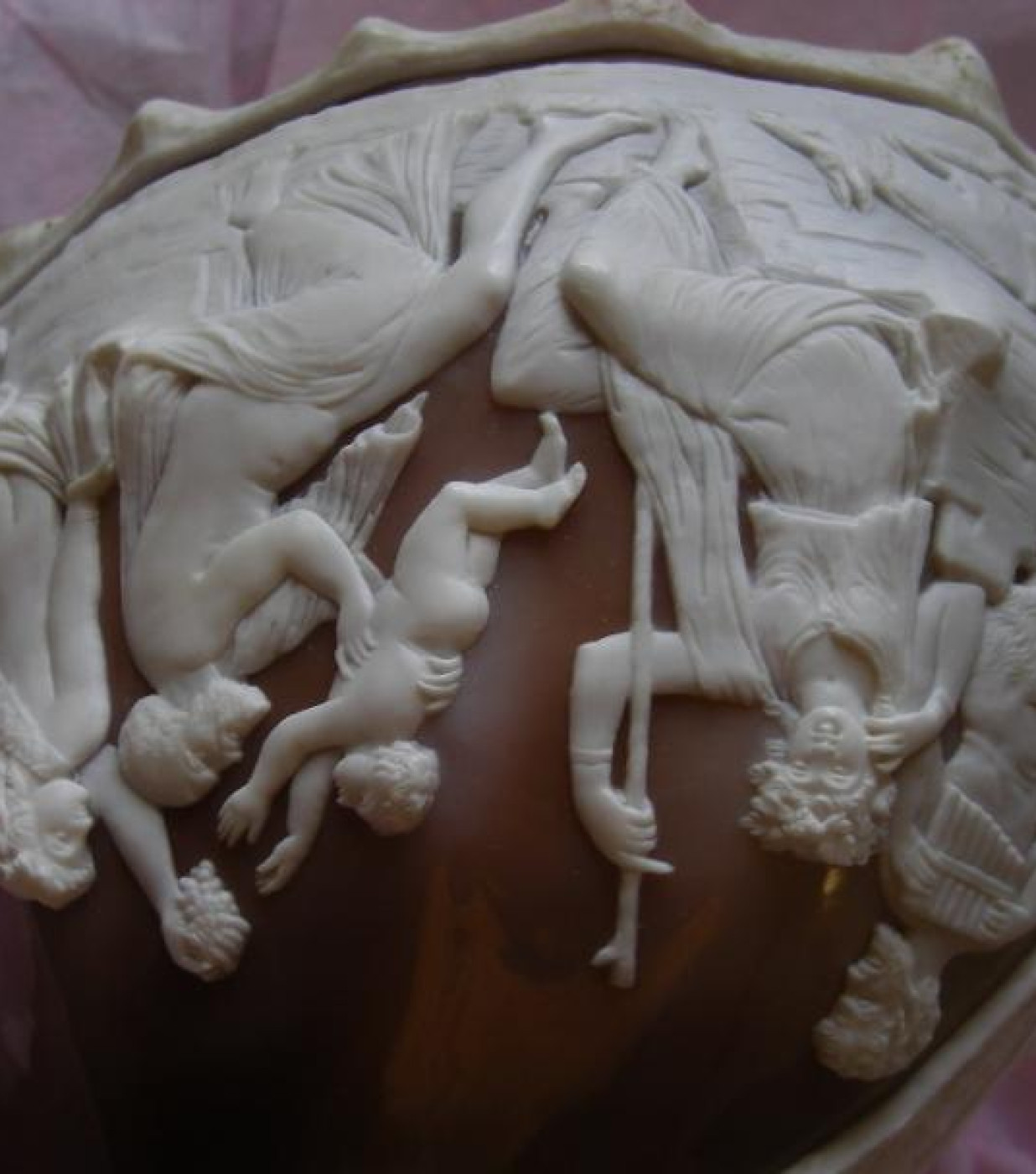 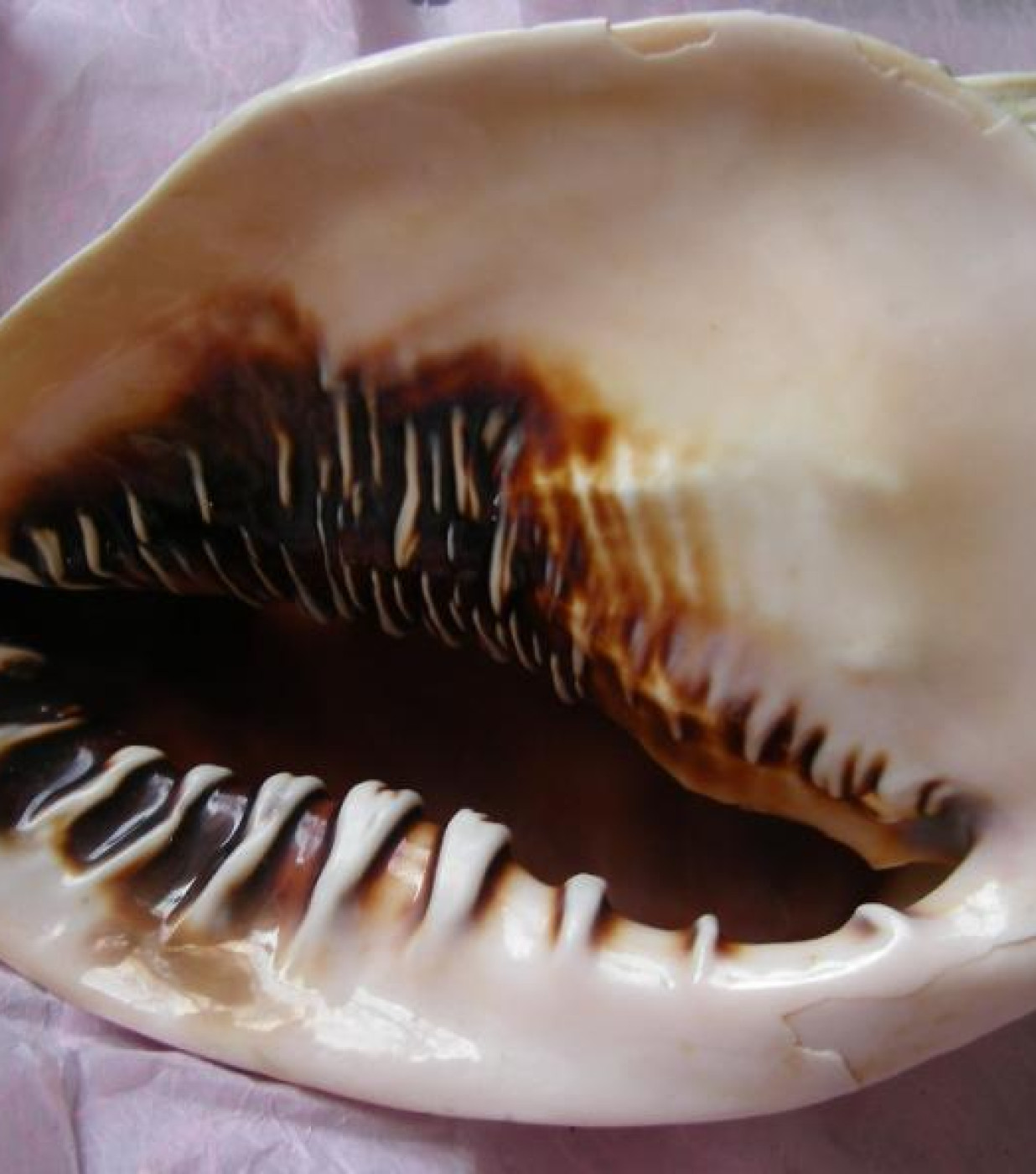 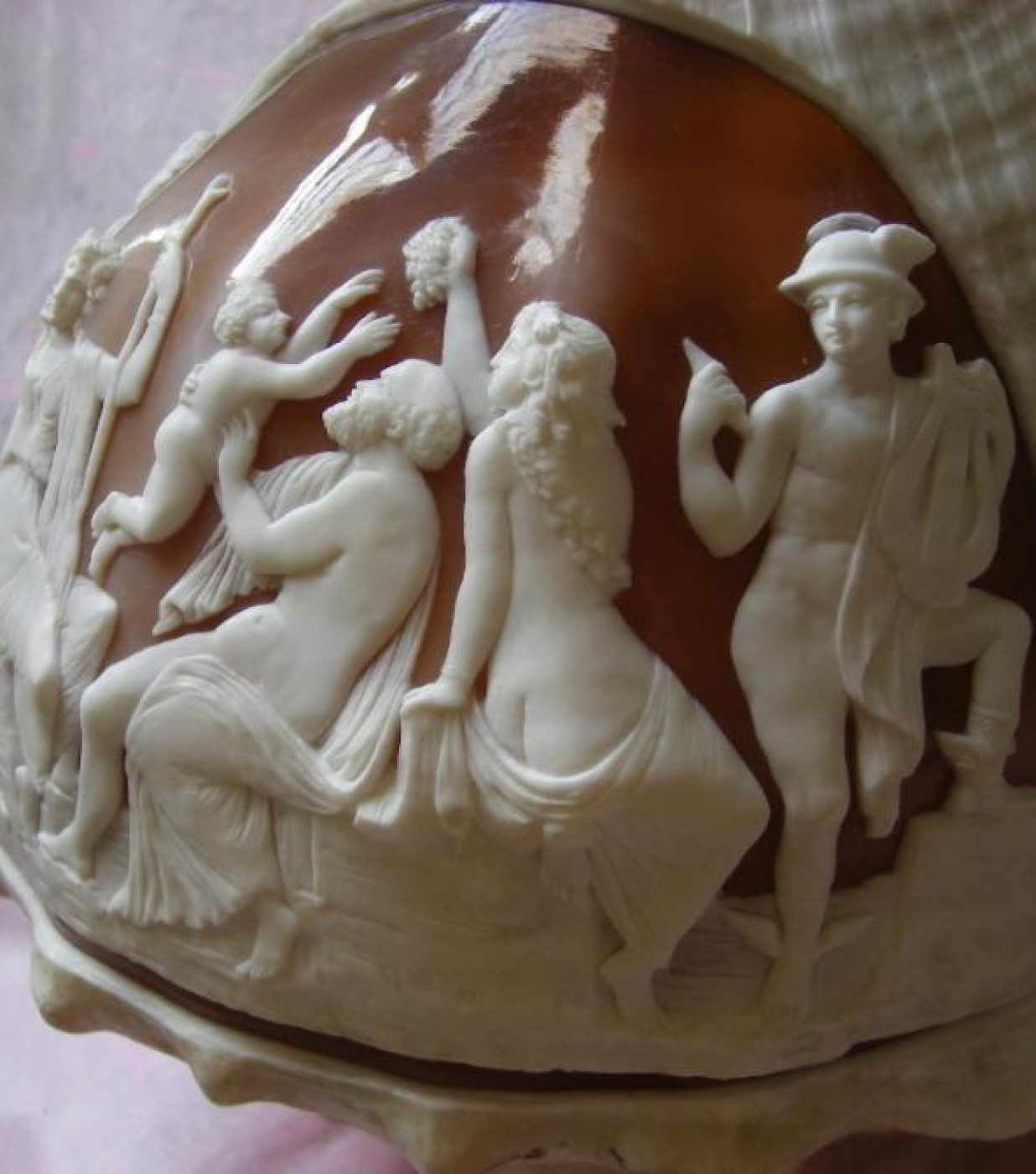 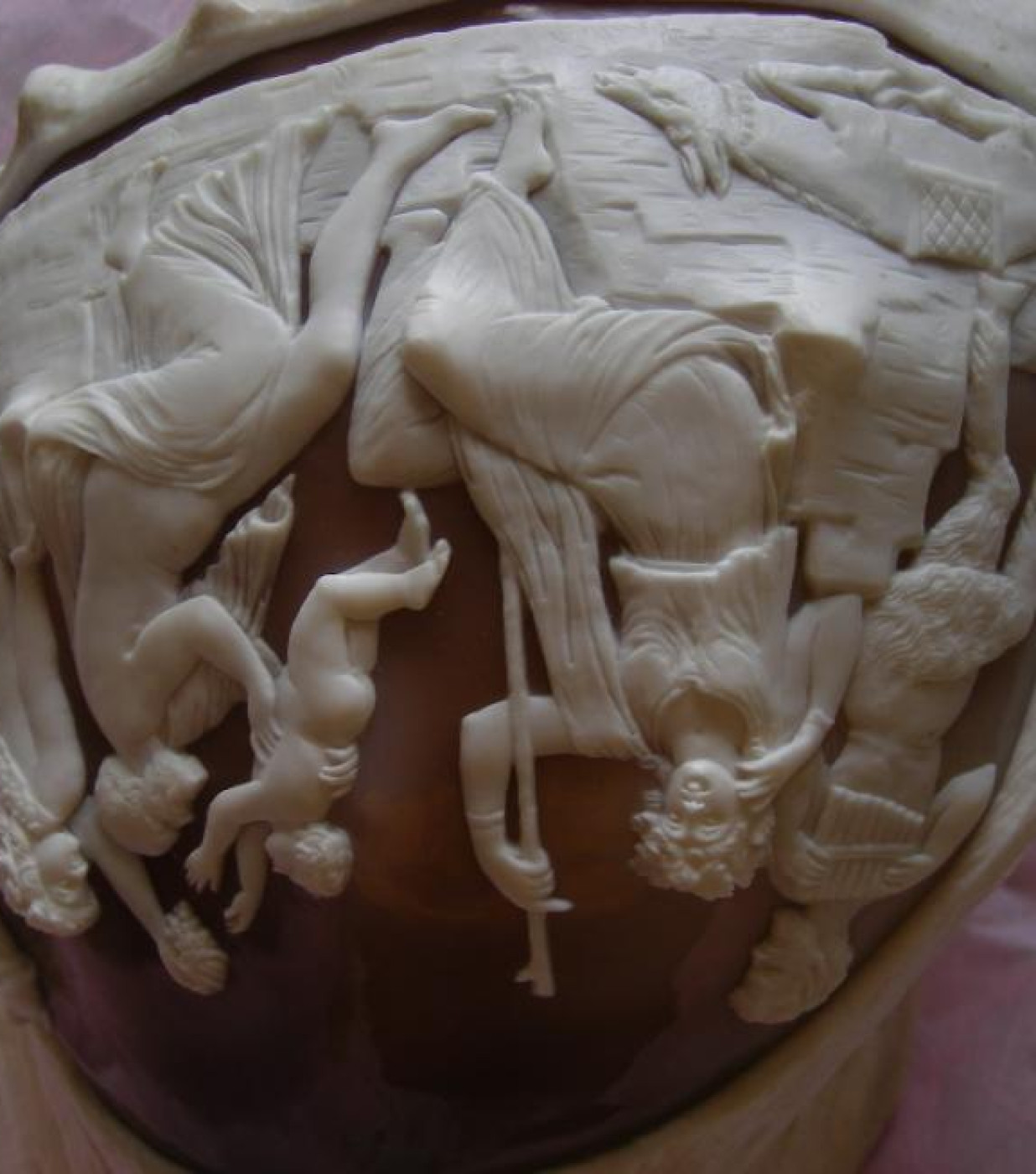 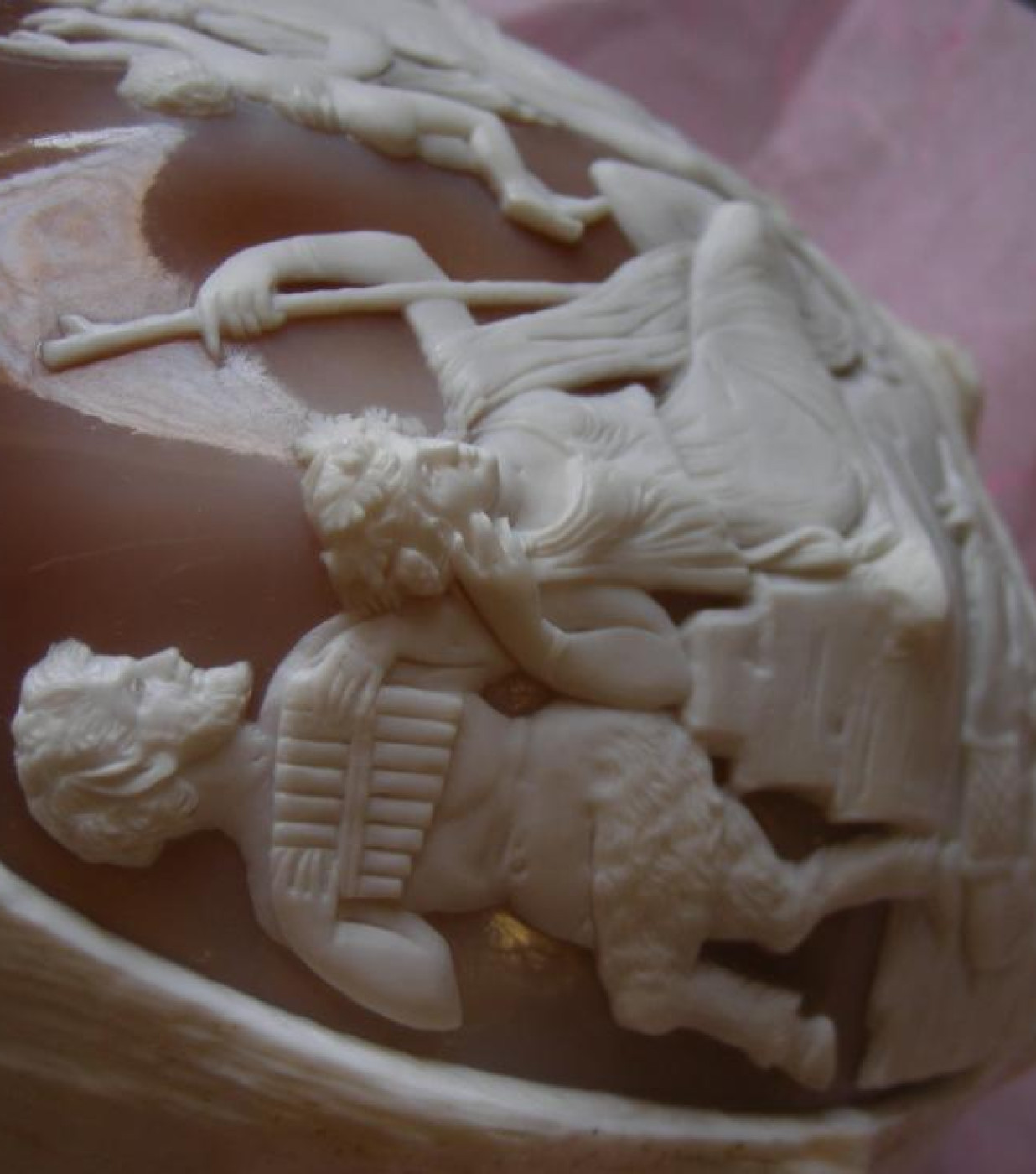 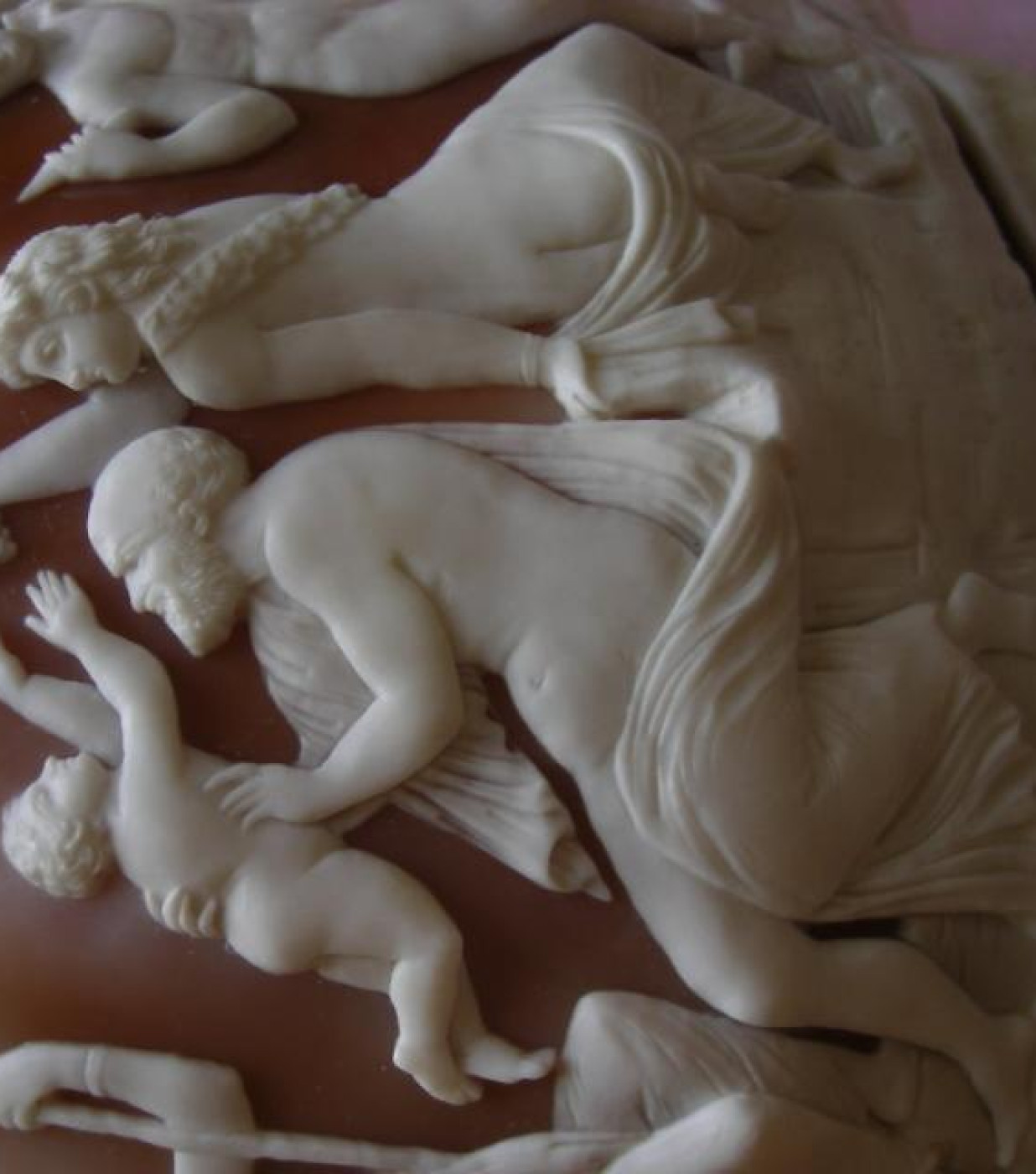 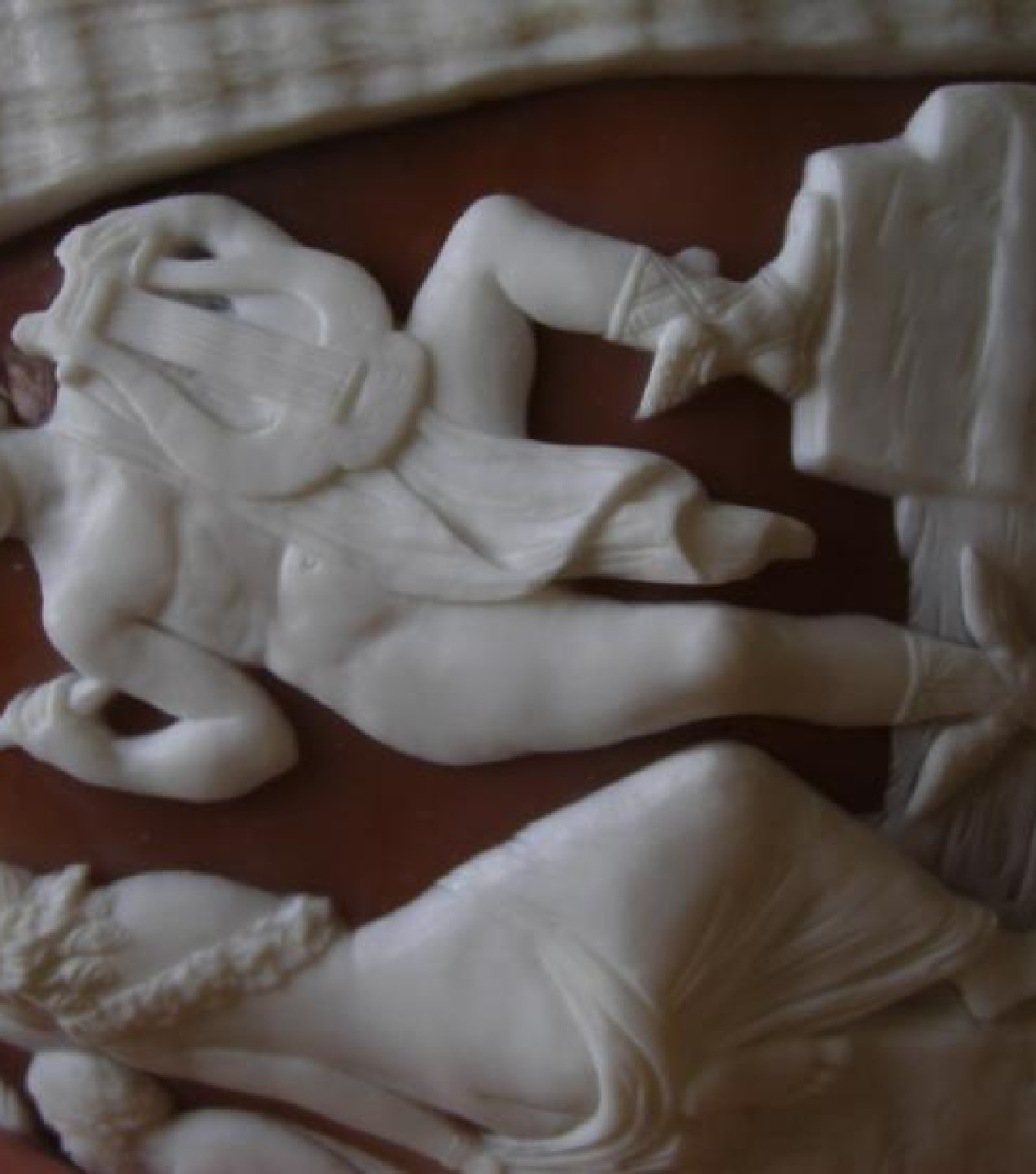 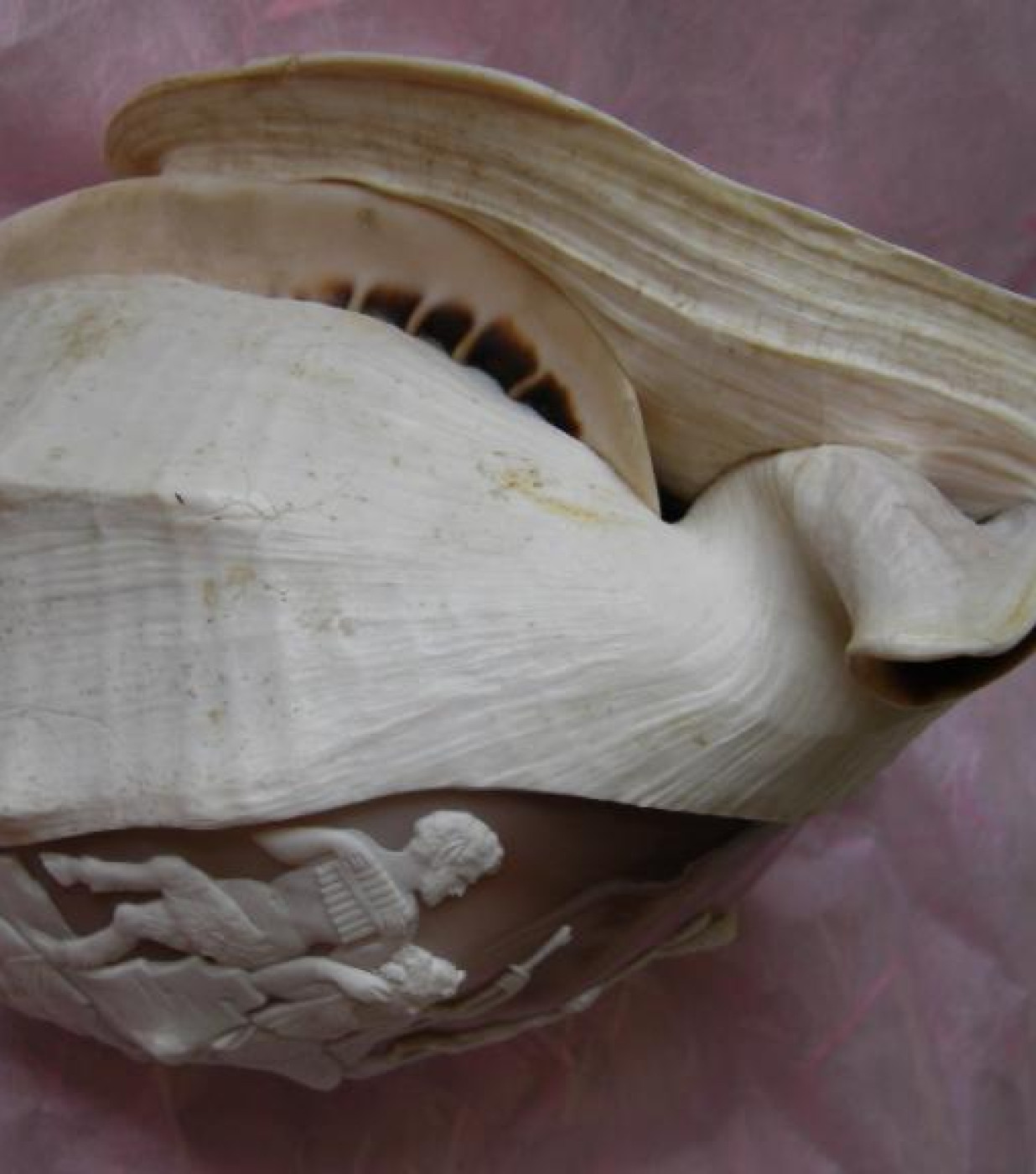 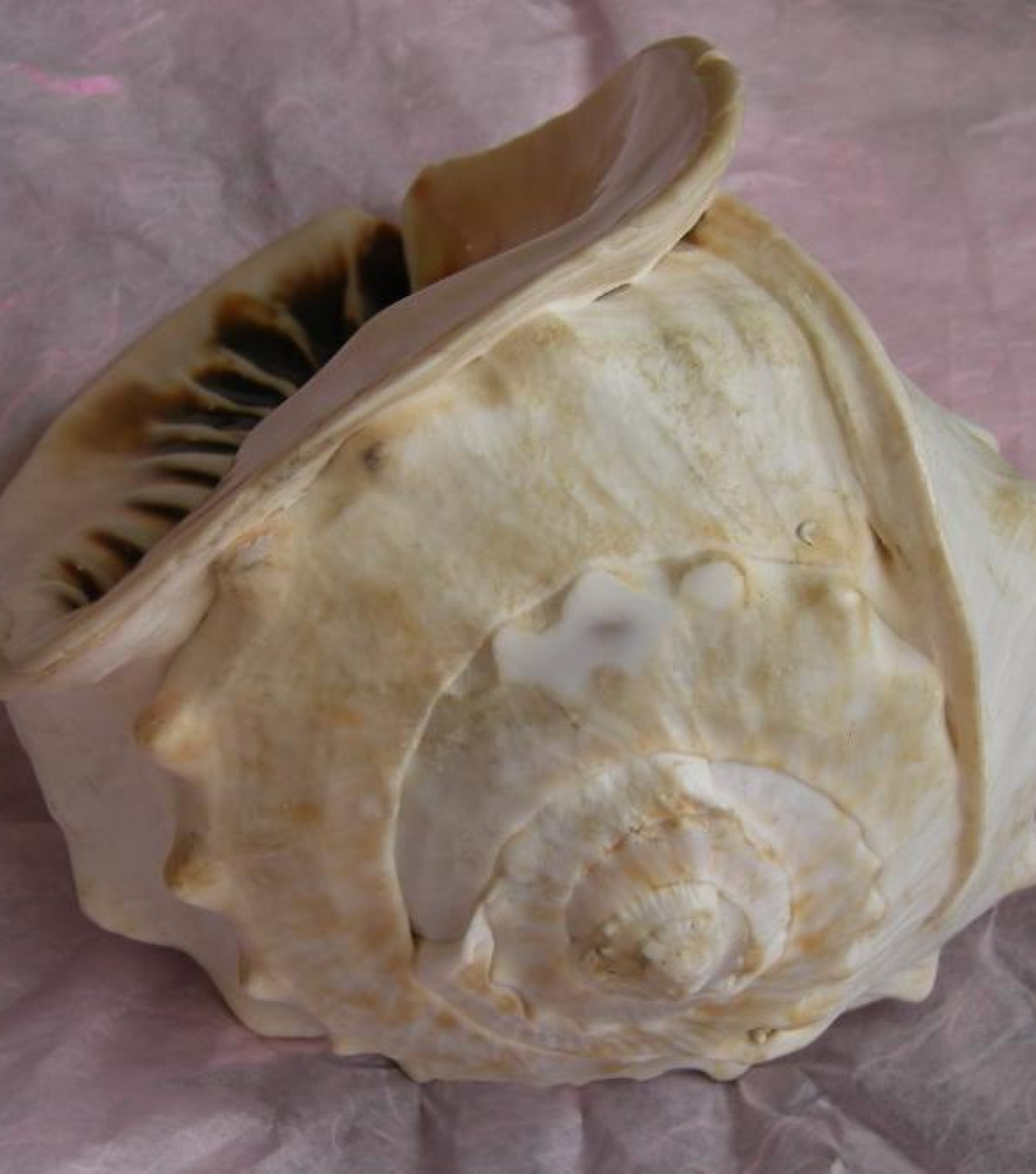 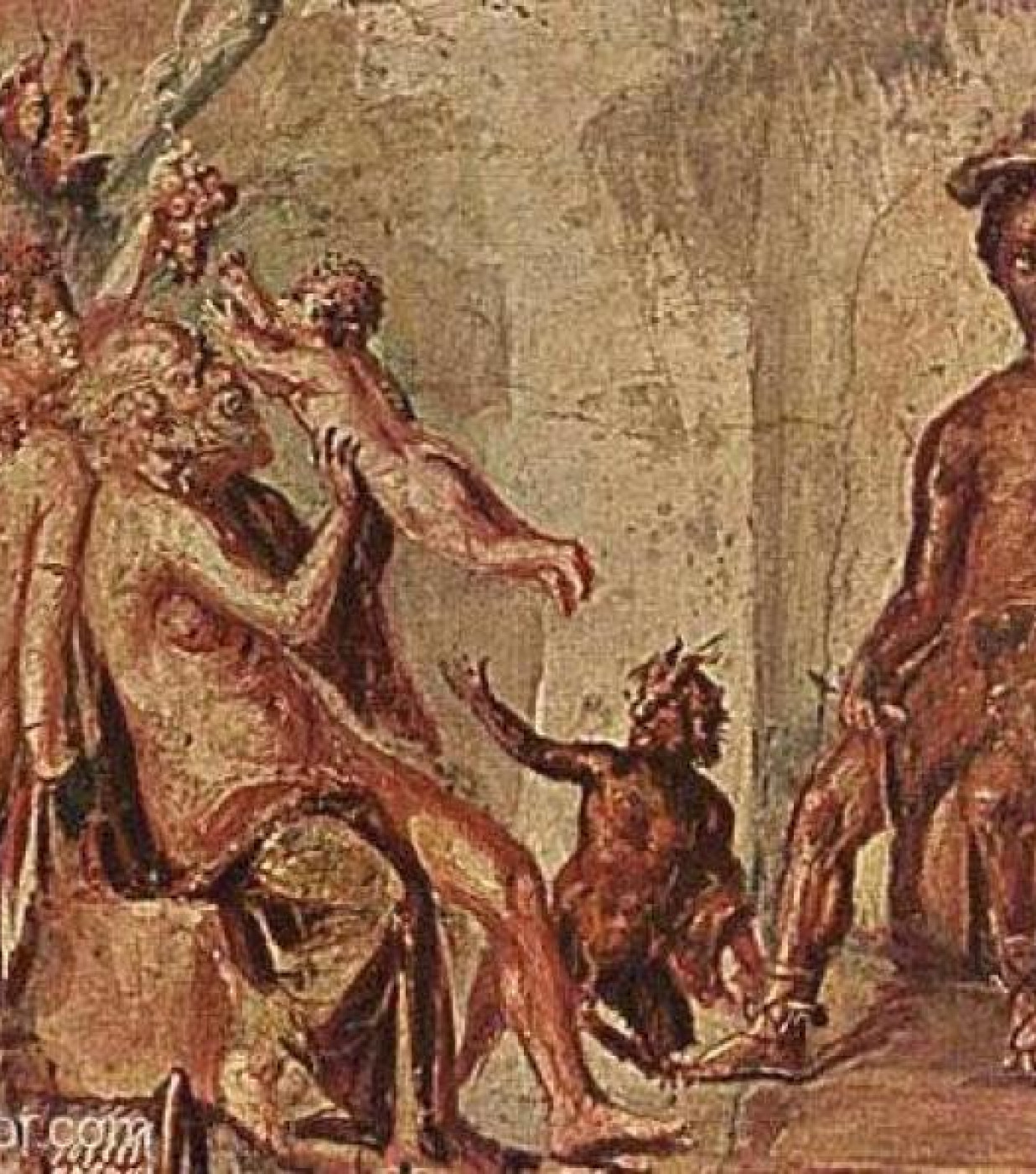 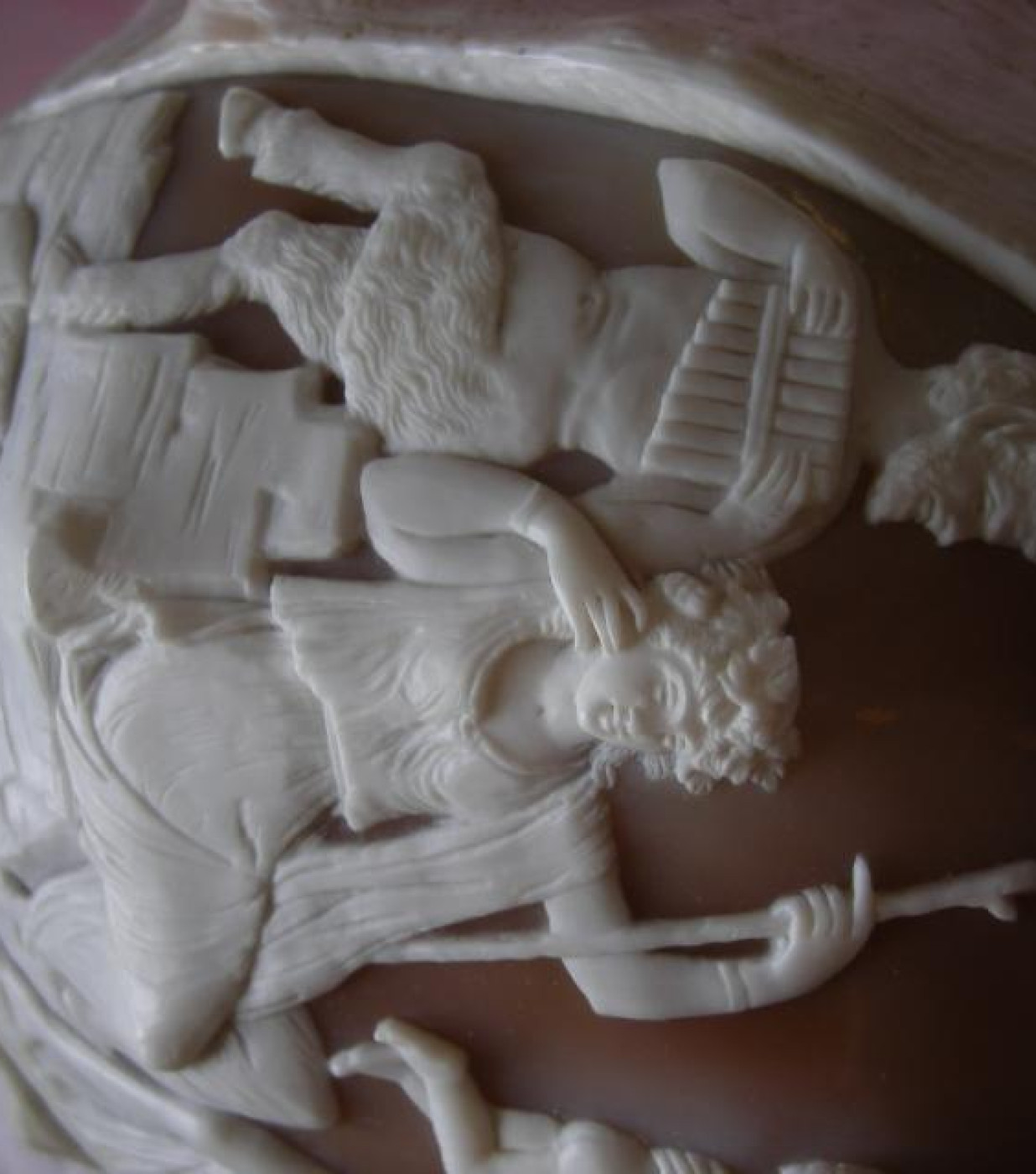 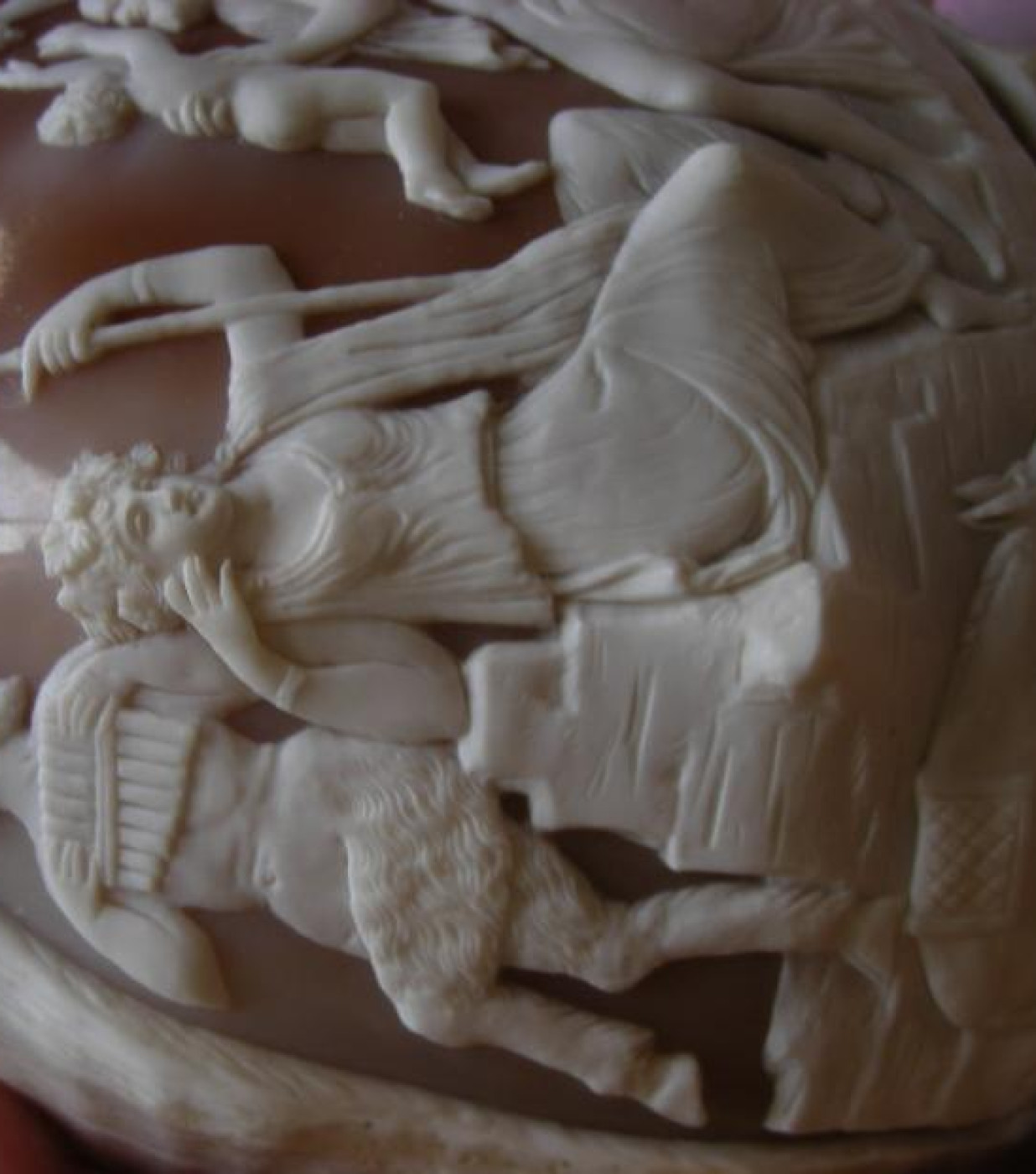 Museum Quality and rarest whole Sardonyx shell carved with a cameo depicting the old god Seilenos who plays with the infant Dionysus. Beside him sits a Nysias Nymph holding a bunch of grapes out for the child. The goat-legged Pan, and Hermes with winged cap, sandals and lyre sit to one side. A very rare subject from a fresco found in Pompeii and now in the Archaelogical Museum in Naples. Carving is a museum quality one. Shell is from early 1800. We can find Mercury in full figure, Mercury was as second father for Dionysus, again there are Bacchantes, a Satyr or Pan, a baby who is Dionysus when he was just born. The man who is holding the baby is the God Seilenos. There is also a donkey which was one of the sacred animals to Dionysus, it also represented, along the panther, the abundance and the sexual power. The carver has used the second row of the knobs of shell to make the knee of Mercury, a Bacchante's knee, the first Bacchante's back, a part of the rock where the old man is seating, a part of the rock where the second bacchante is seating. Again the third row of knobs has been used to carved the faces. This is thing that could be not noticed by a no expert one. There are some surface chips on the back, none of them is visible from the front. Nothing of awful considering even the age of the shell. At the bottom you can see that a very small area of the shell has been smoothed to make to shell stands up to see well the scene. Carving is in mint condition. This is a high quality shell, the more the carving is white, the more the shell quality is high. This is an incredible work of art, very detailed cameo, carved by an artist. It is not easy to find whole shells carved in a so perfect way and in so excellent condition. I was lucky finding this one.  A very desirable collectors piece, rare and museum quality cameo.
A bit of History:
SEILENOS (or Silenus) was the old rustic god of the dance of the wine-press, his name being derived from the words seiô, "to move to and fro," and lênos, "the wine-trough." He was also the god of drunkenness who rode in the train ofDionysus seated on the back of a donkey. The old satyr was the foster-father of the god Dionysus. The divine child was delivered into his care after his birth from the thigh of Zeus, and raised by Seilenos and the Nysiades in a cave on the mythical mountain of Nysa.
NYSEIDES or NYSIADES (Nusiai), the nymphs of Nysa, who are said to have reared Dionysus, and whose names are Cisseïs, Nysa, Erato, Eriphia, Bromia, and Polyhymno. THE NYSIADES were, three, five or six Okeanid nymphs of the mythical Mount Nysa. Zeus entrusted the infant godDionysos to their care who they raised with the assistance of the old satyr-god Seilenos. When the god was grown they joined his company as the first of the Bacchantes. Later Dionysus placed them amongst the stars as the constellationHyades.