Cameo of Venus and Cupid after John Gibson 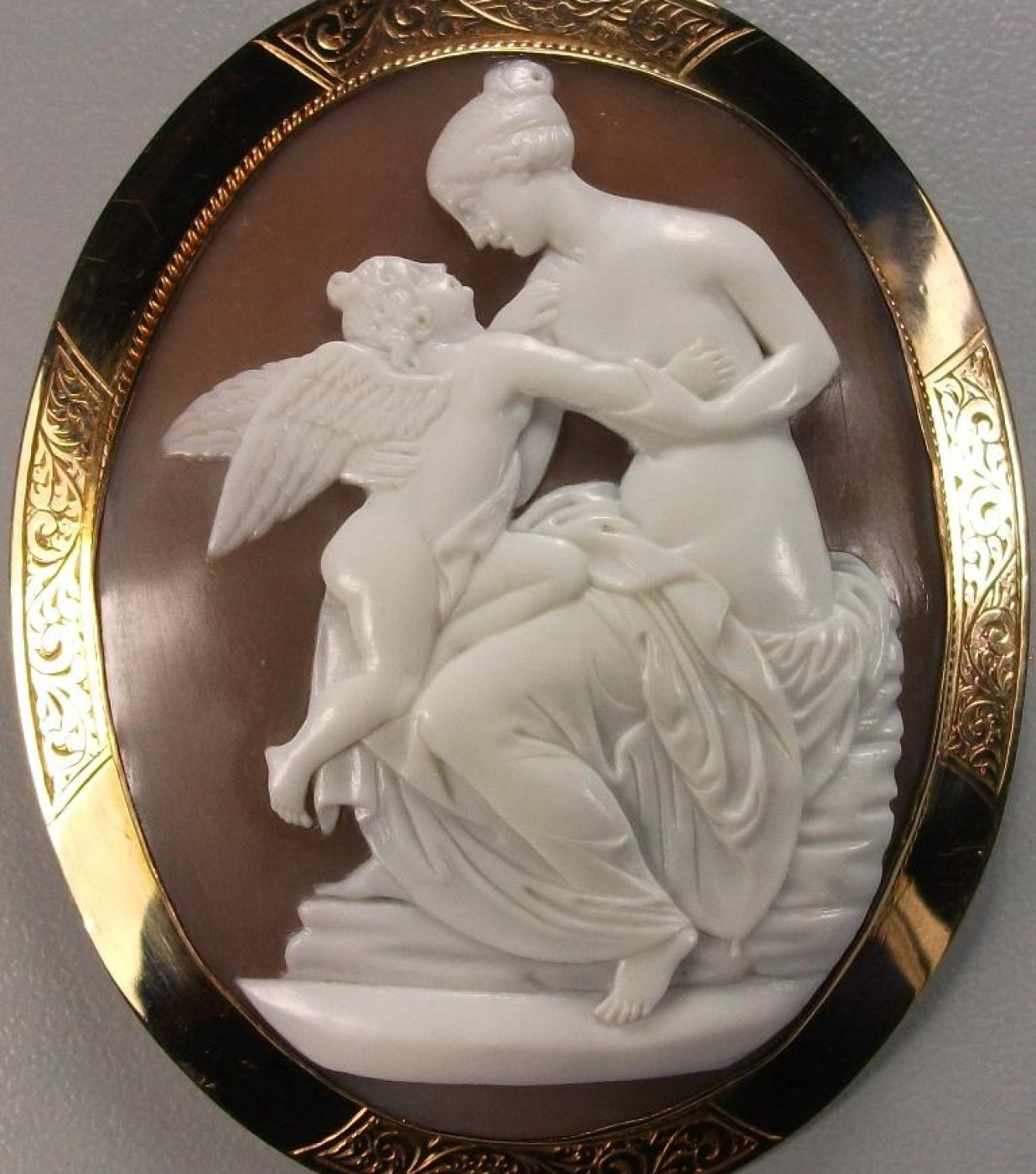 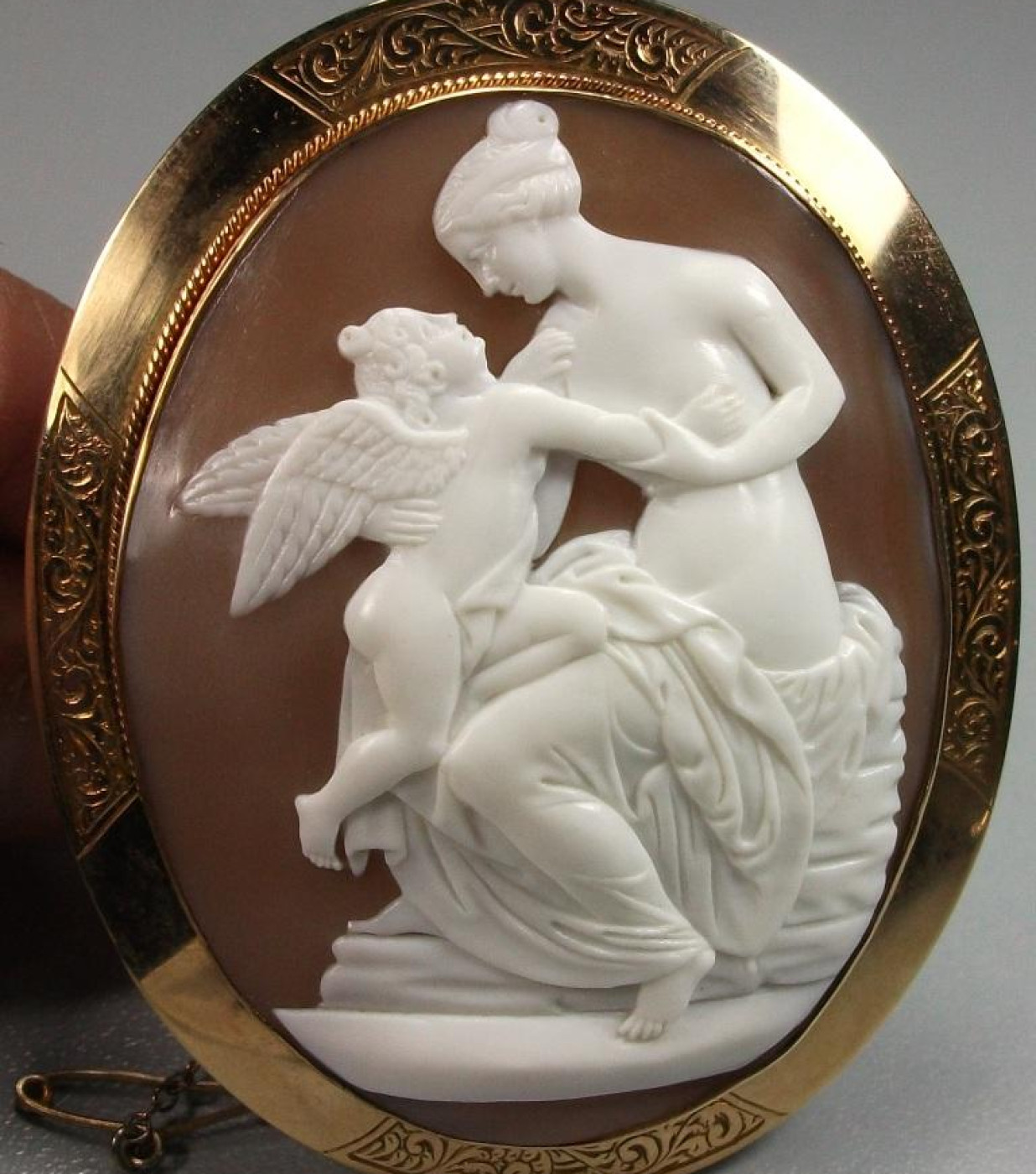 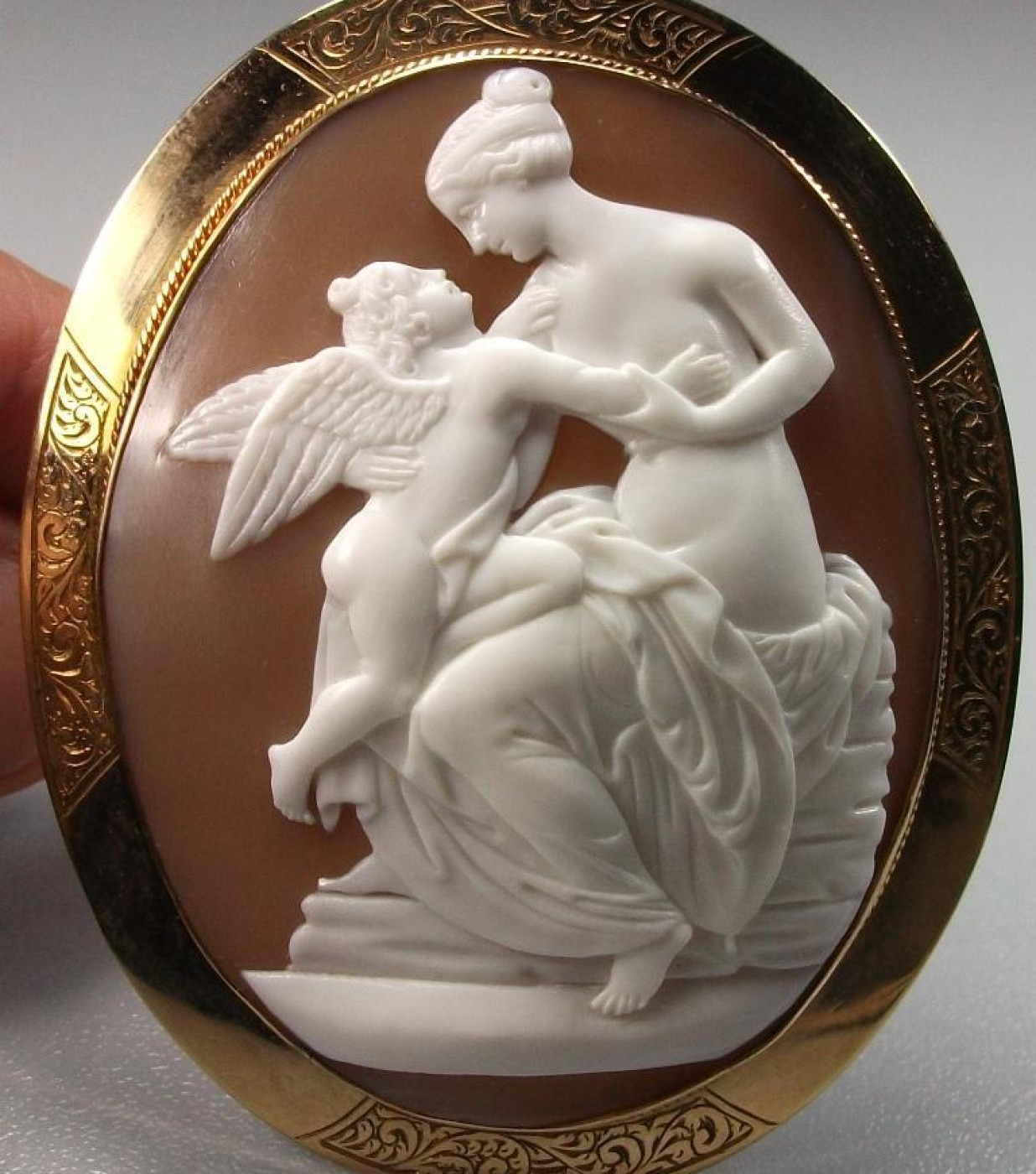 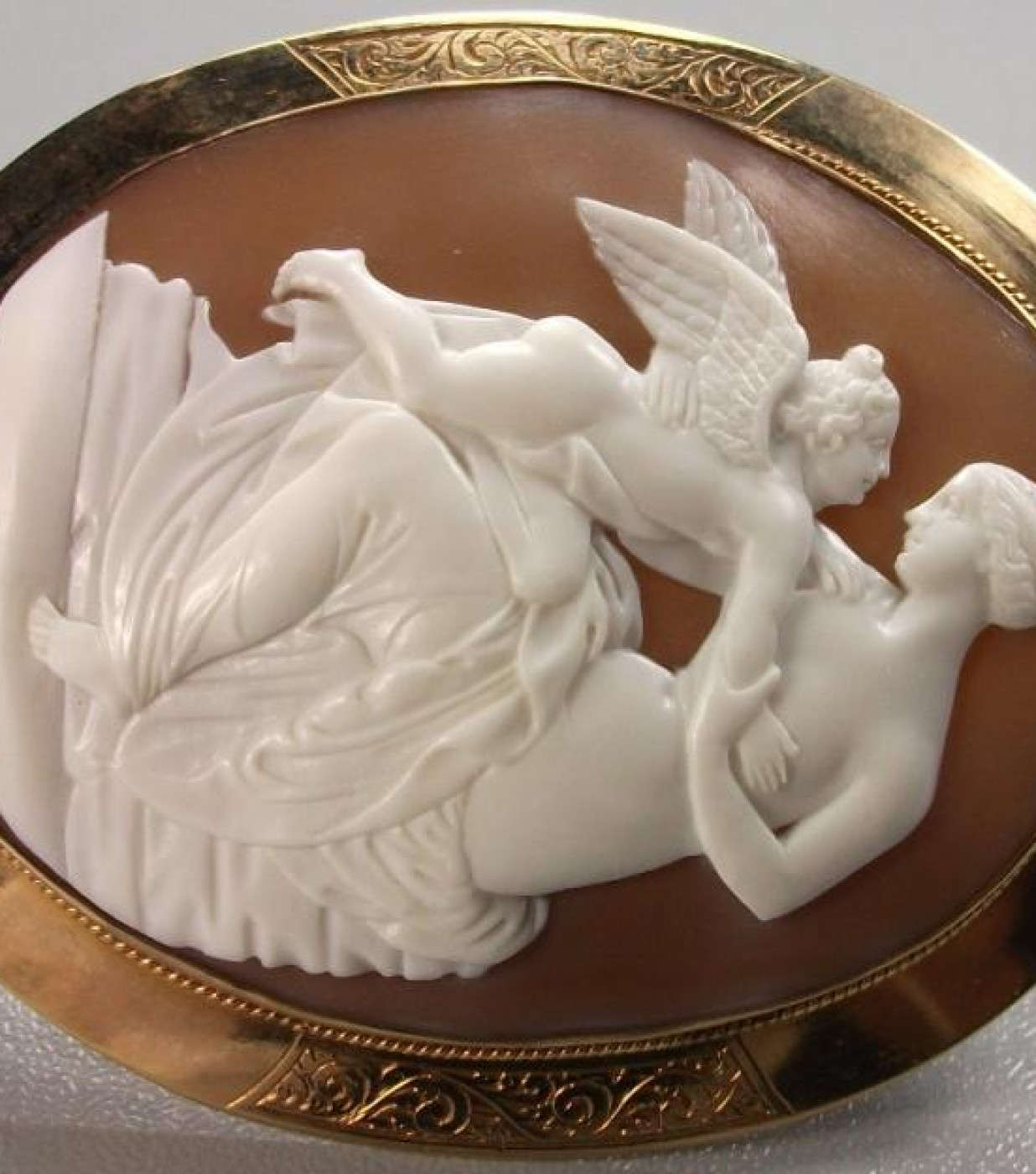 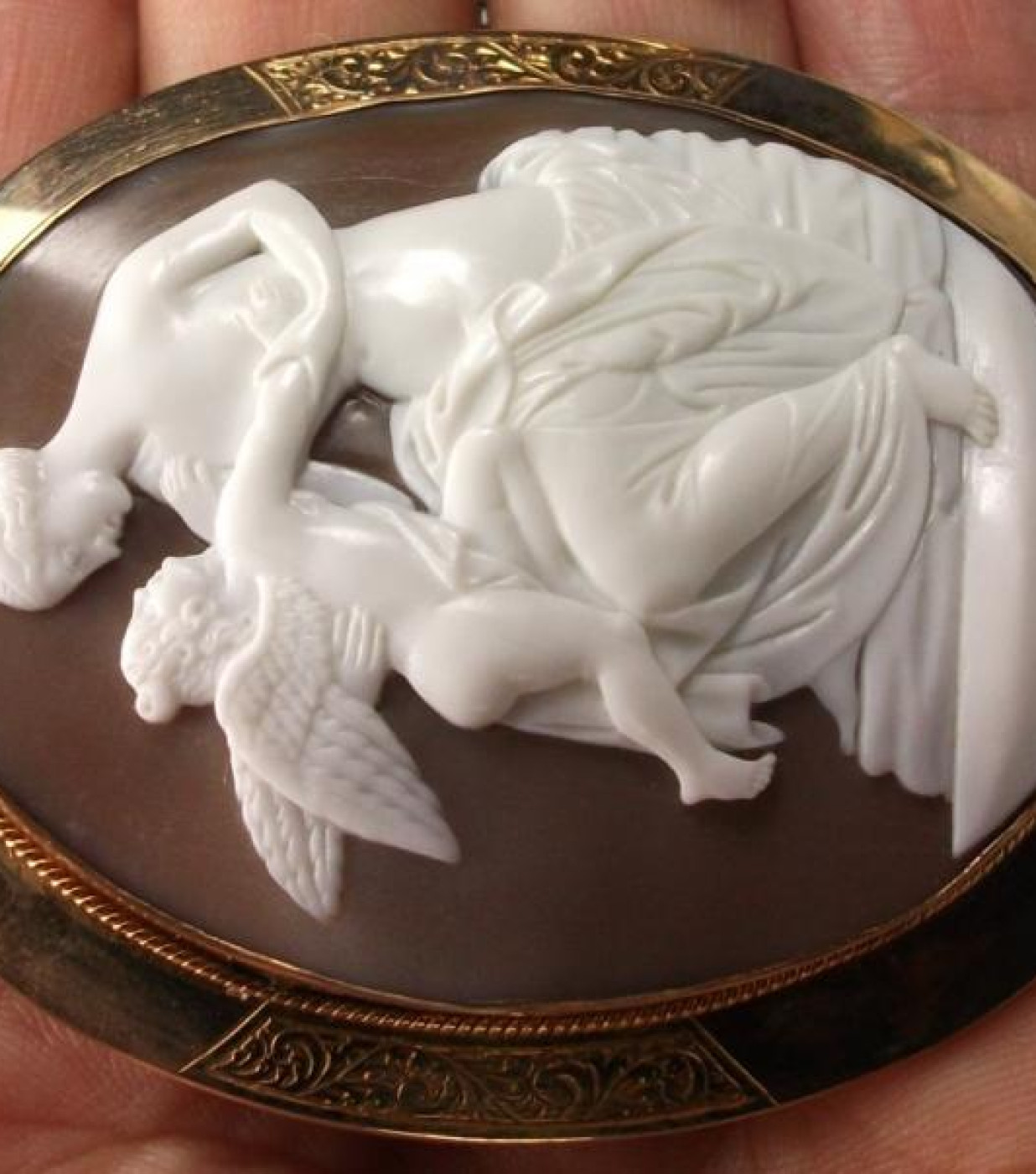 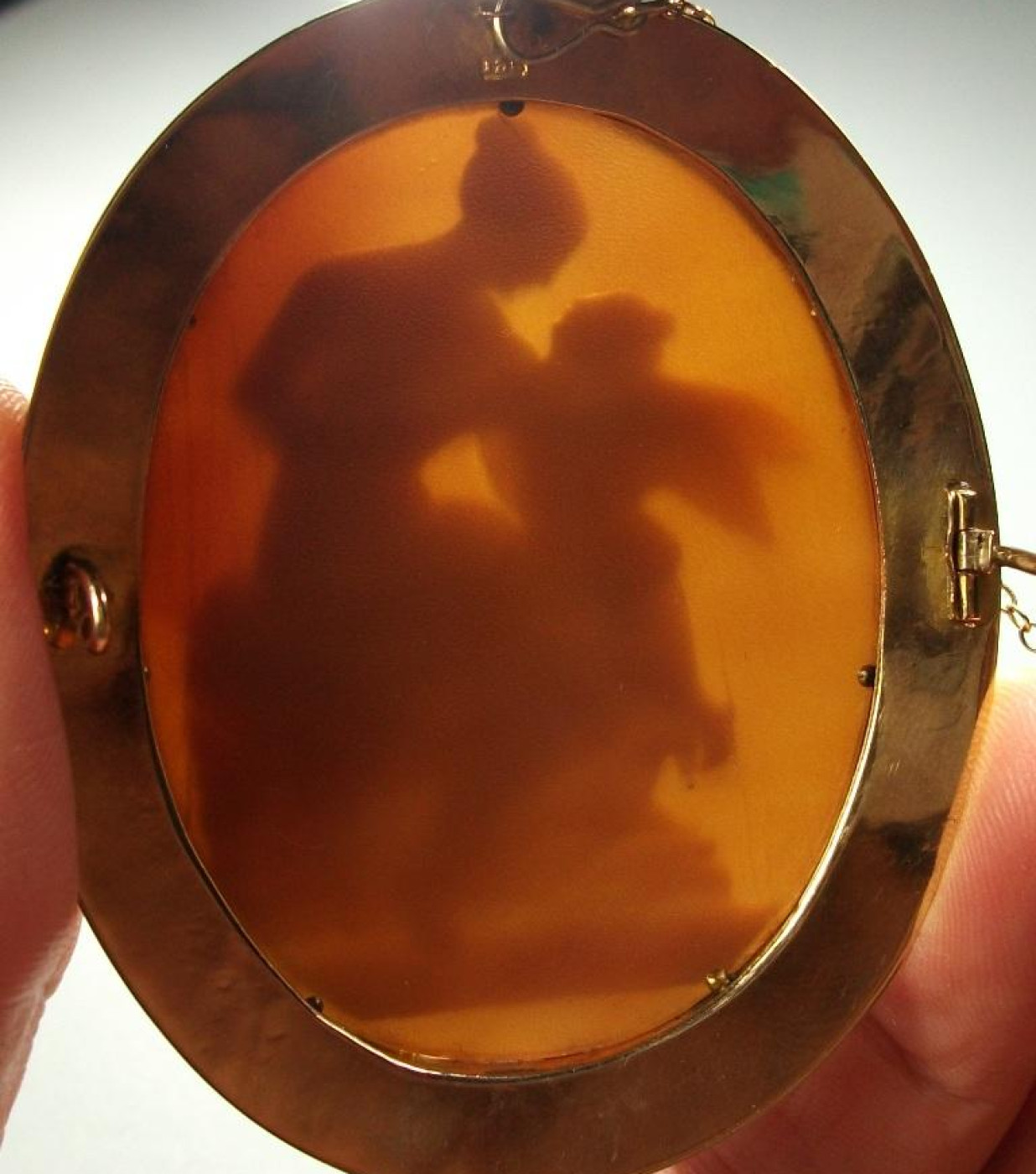 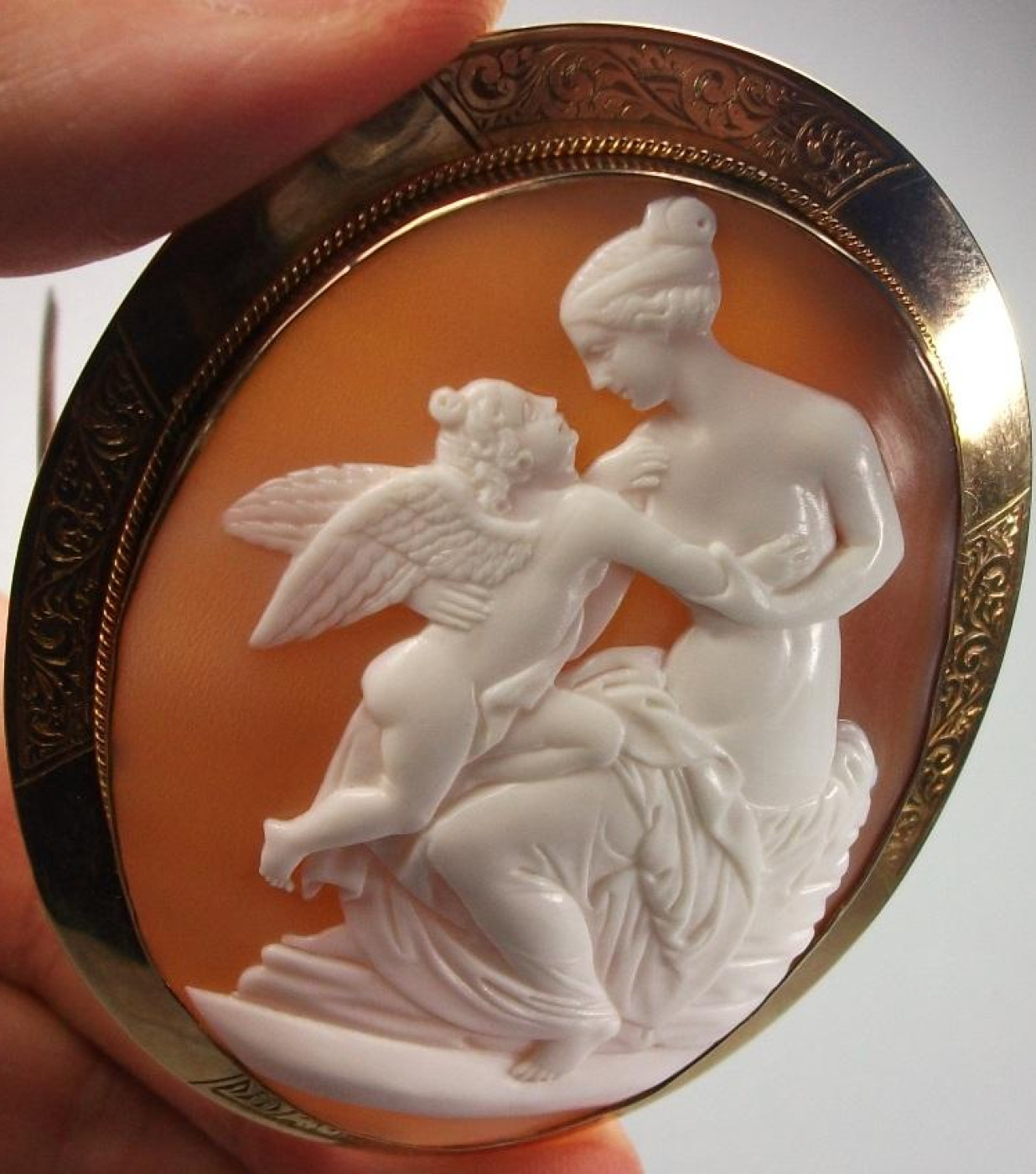 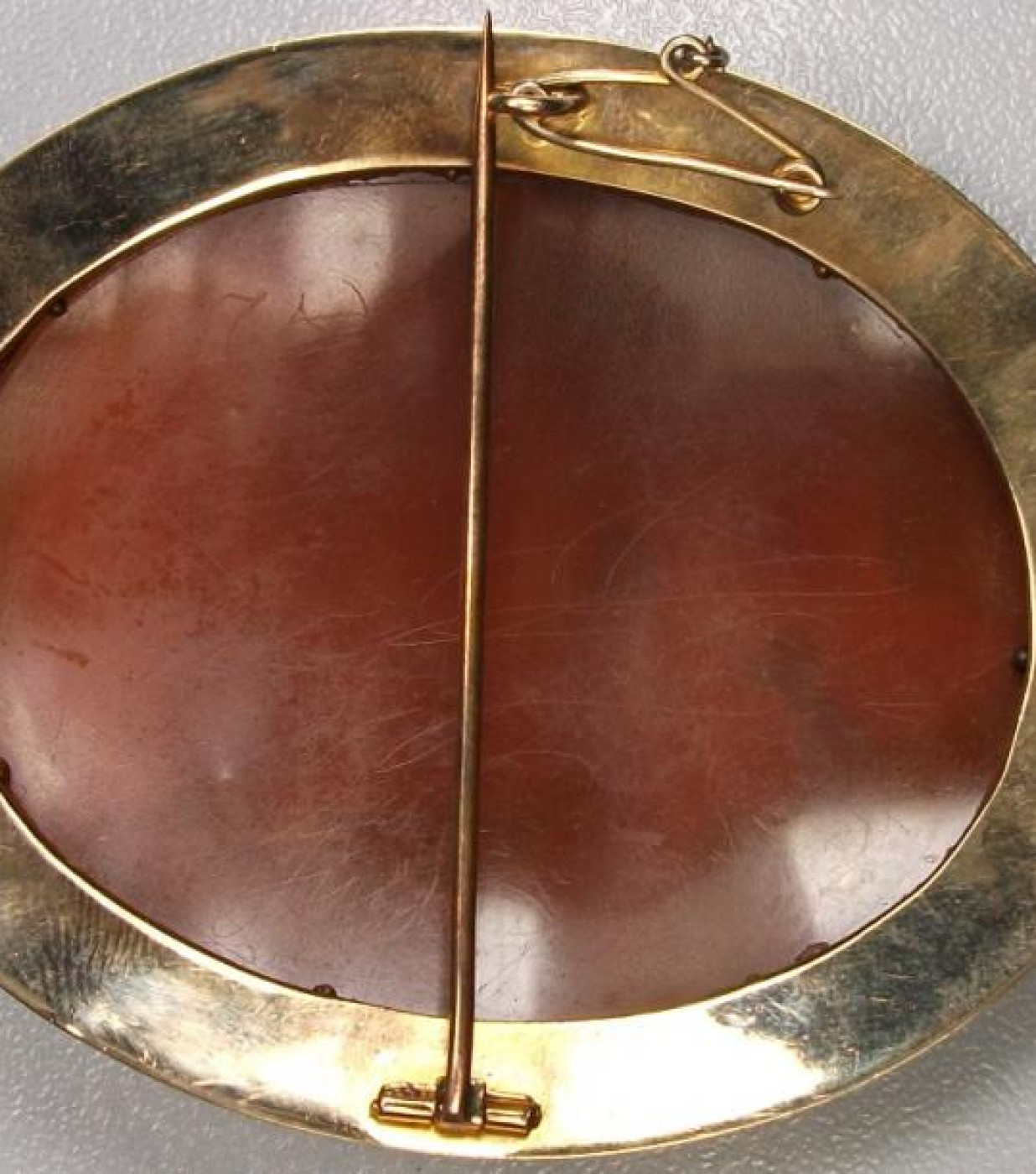 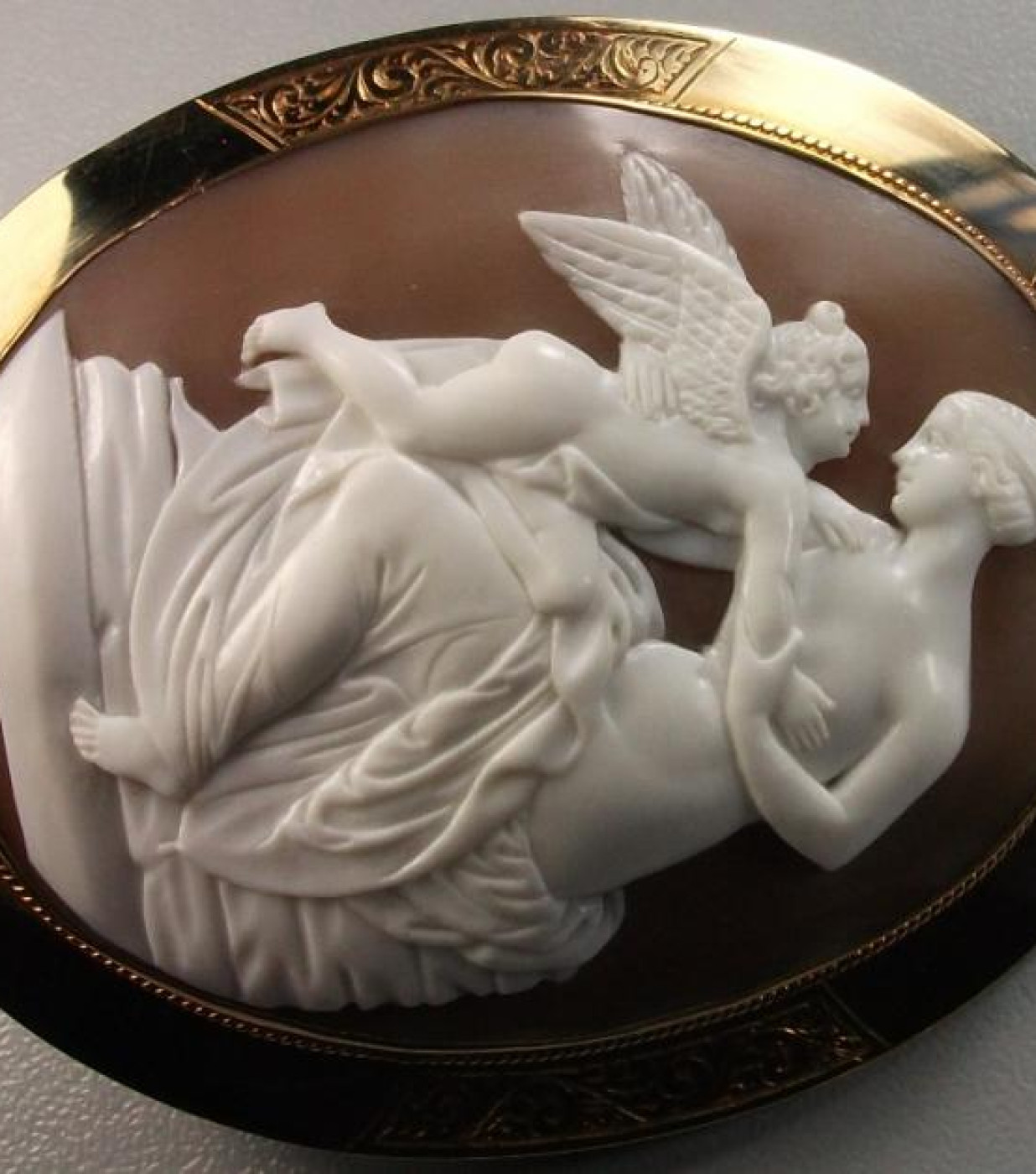 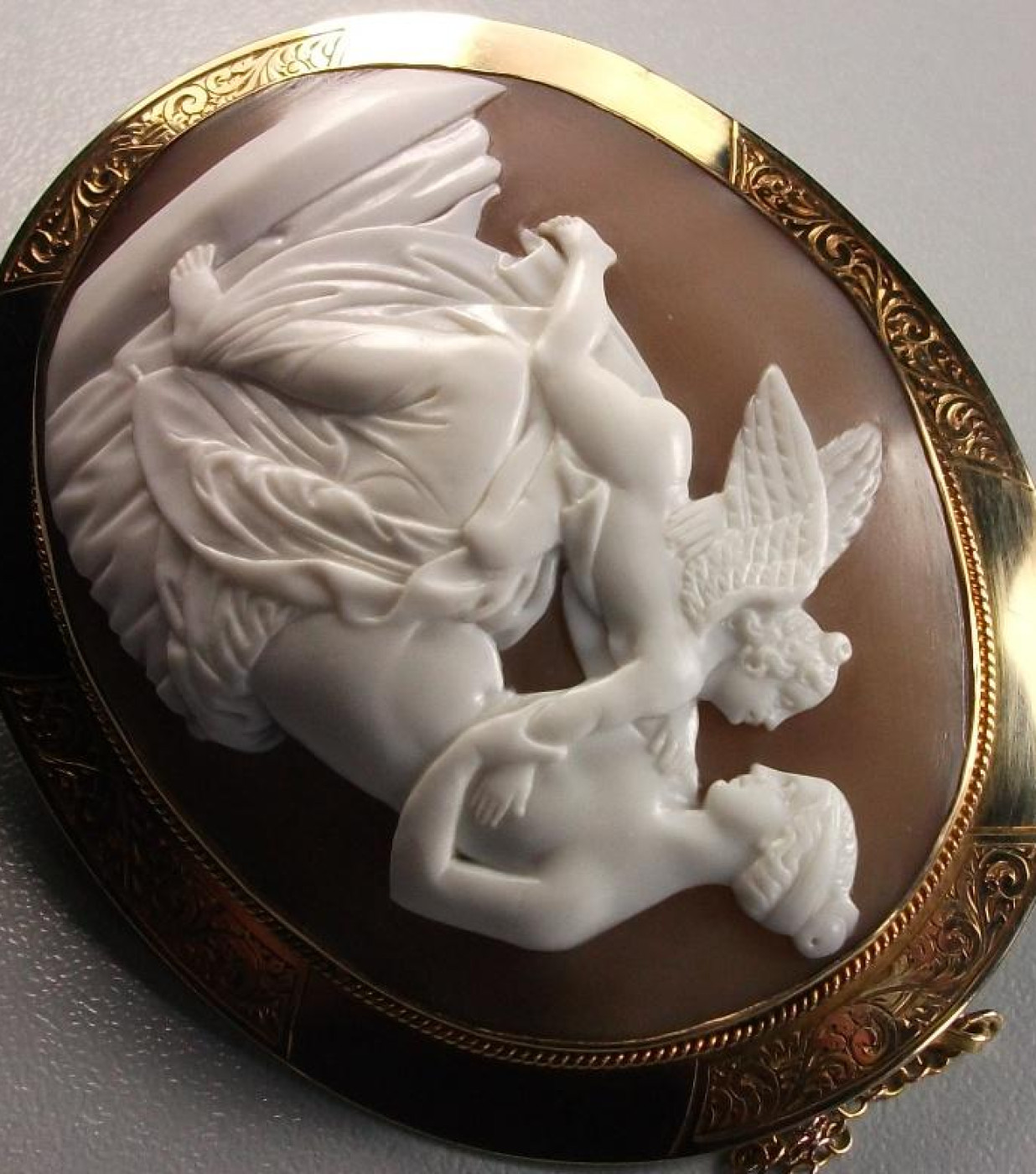 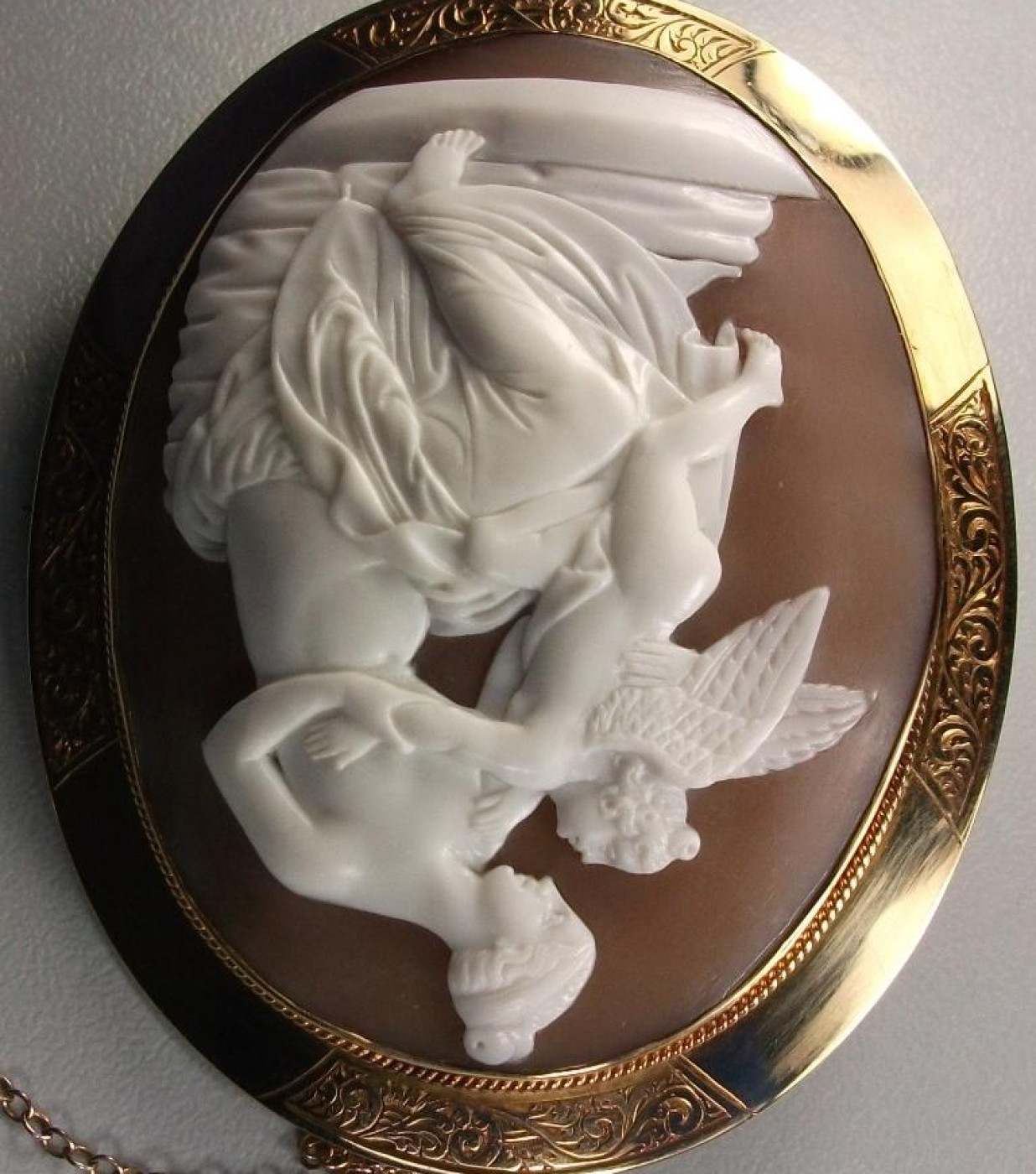 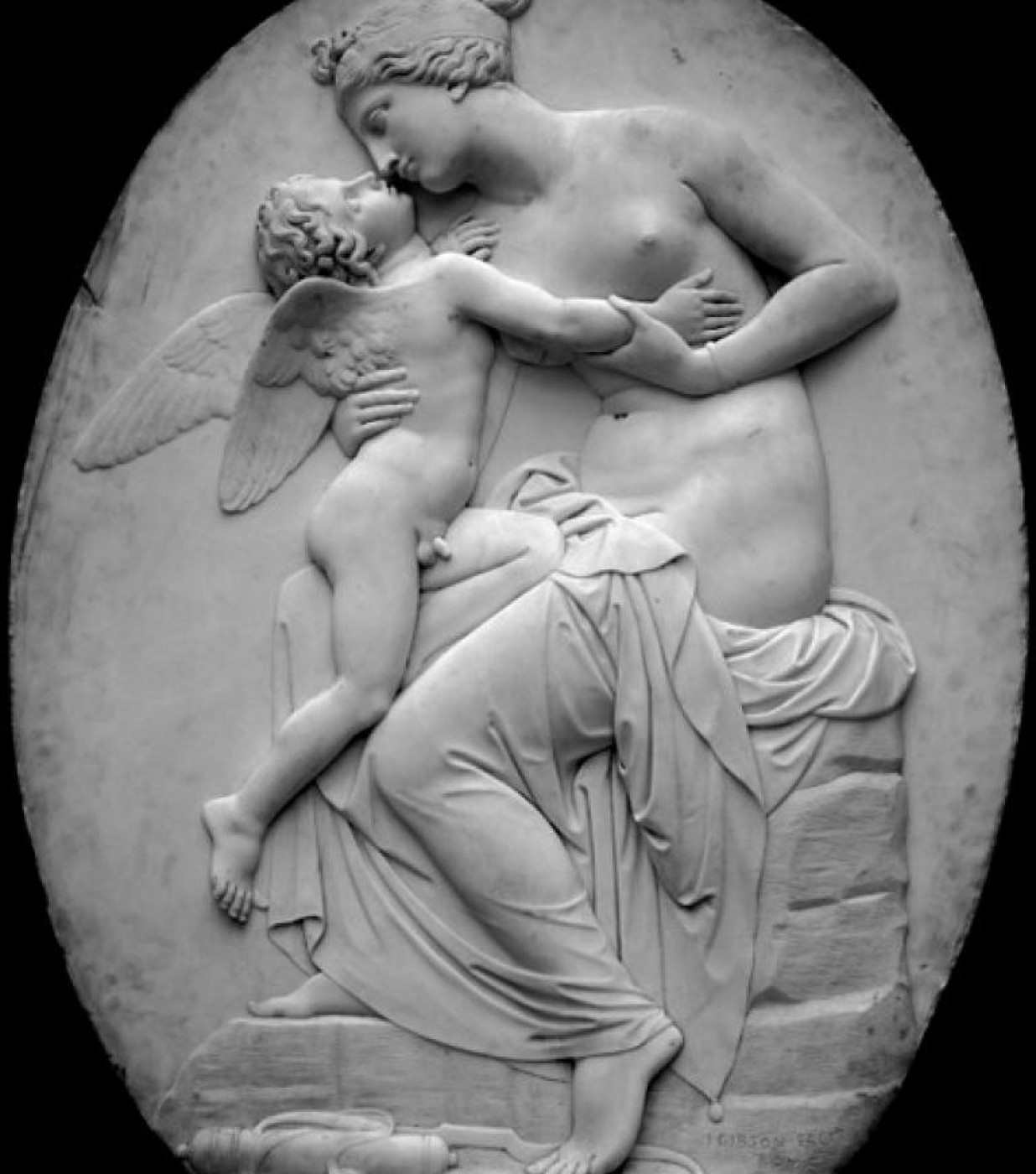 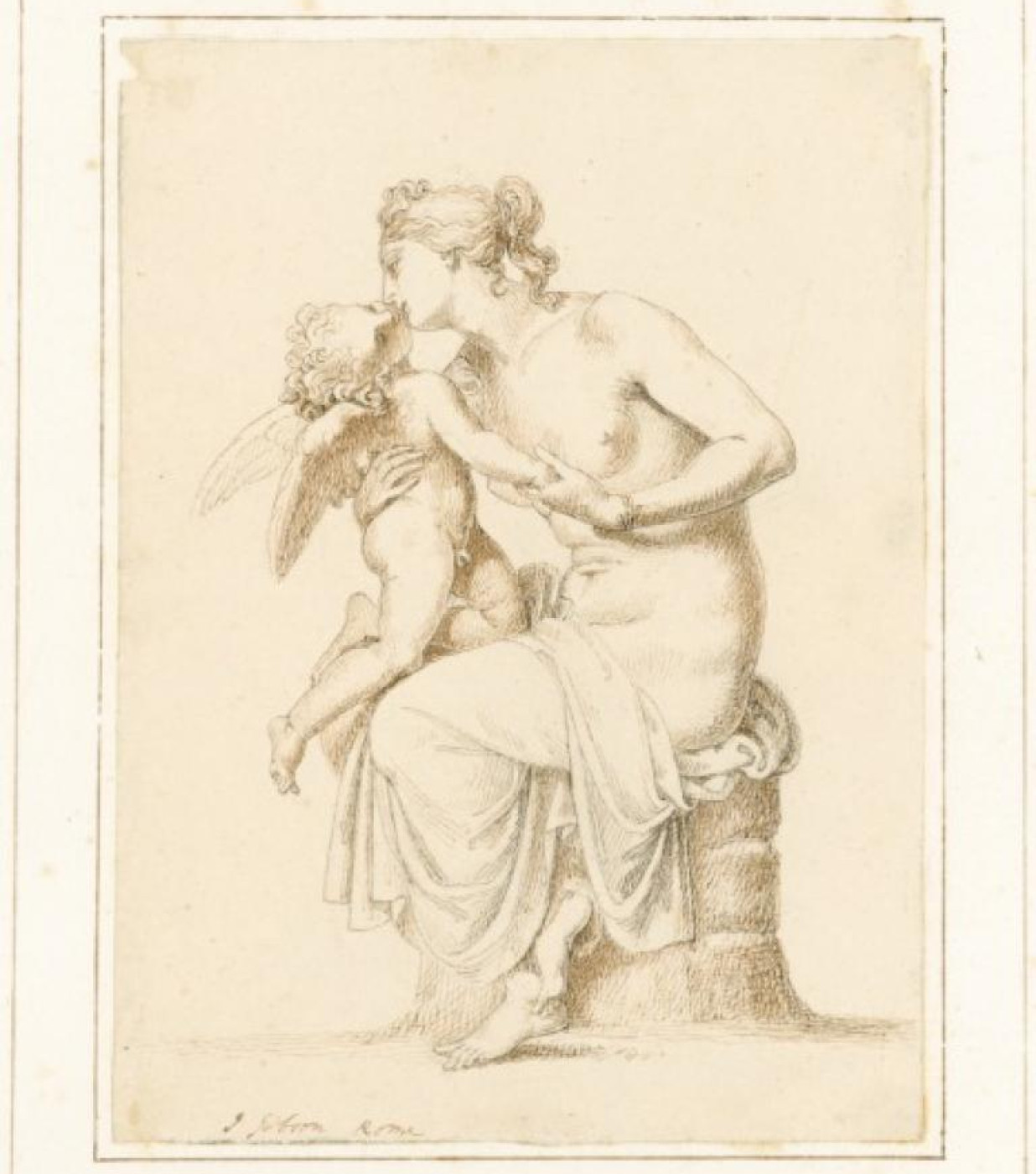 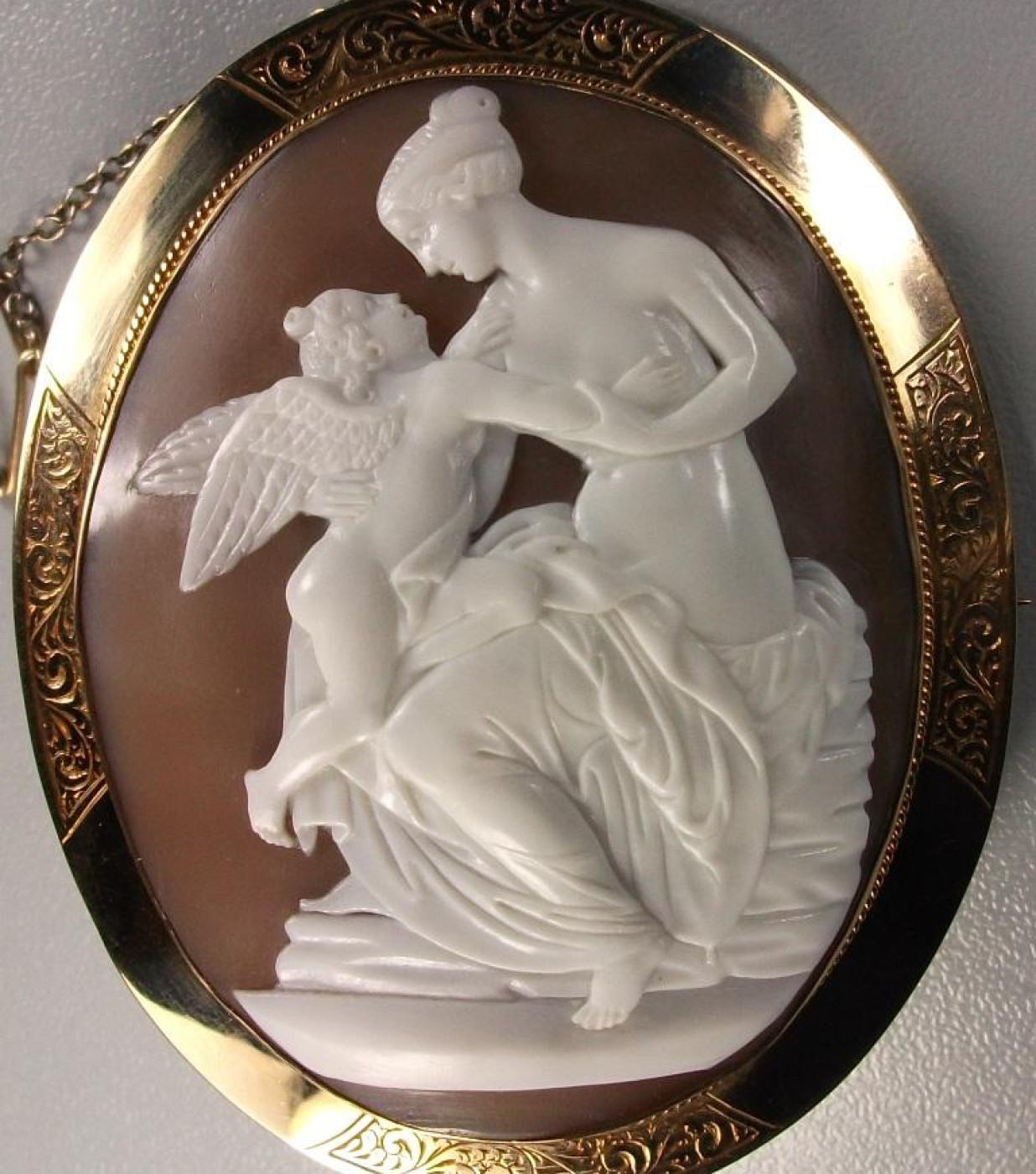 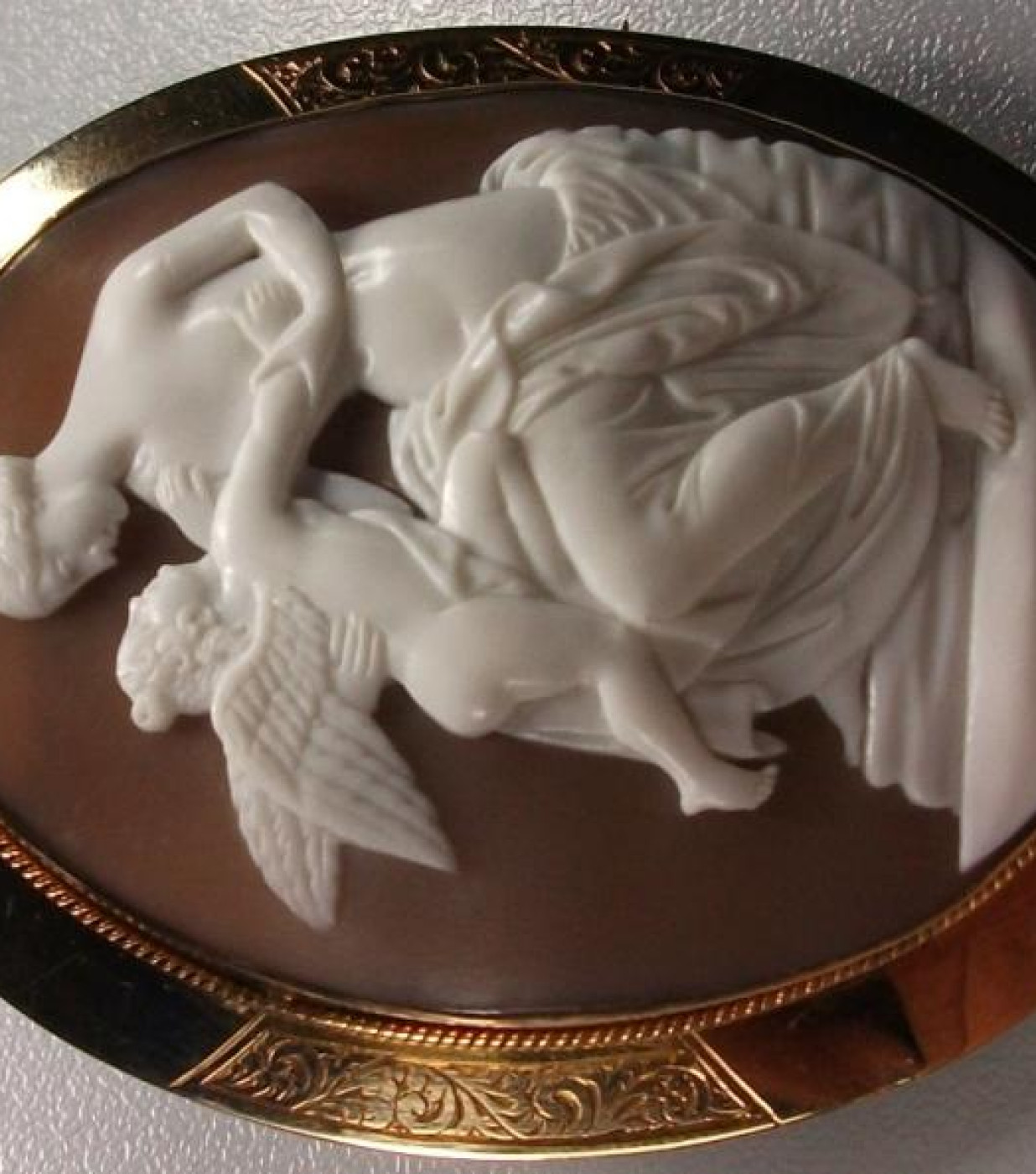 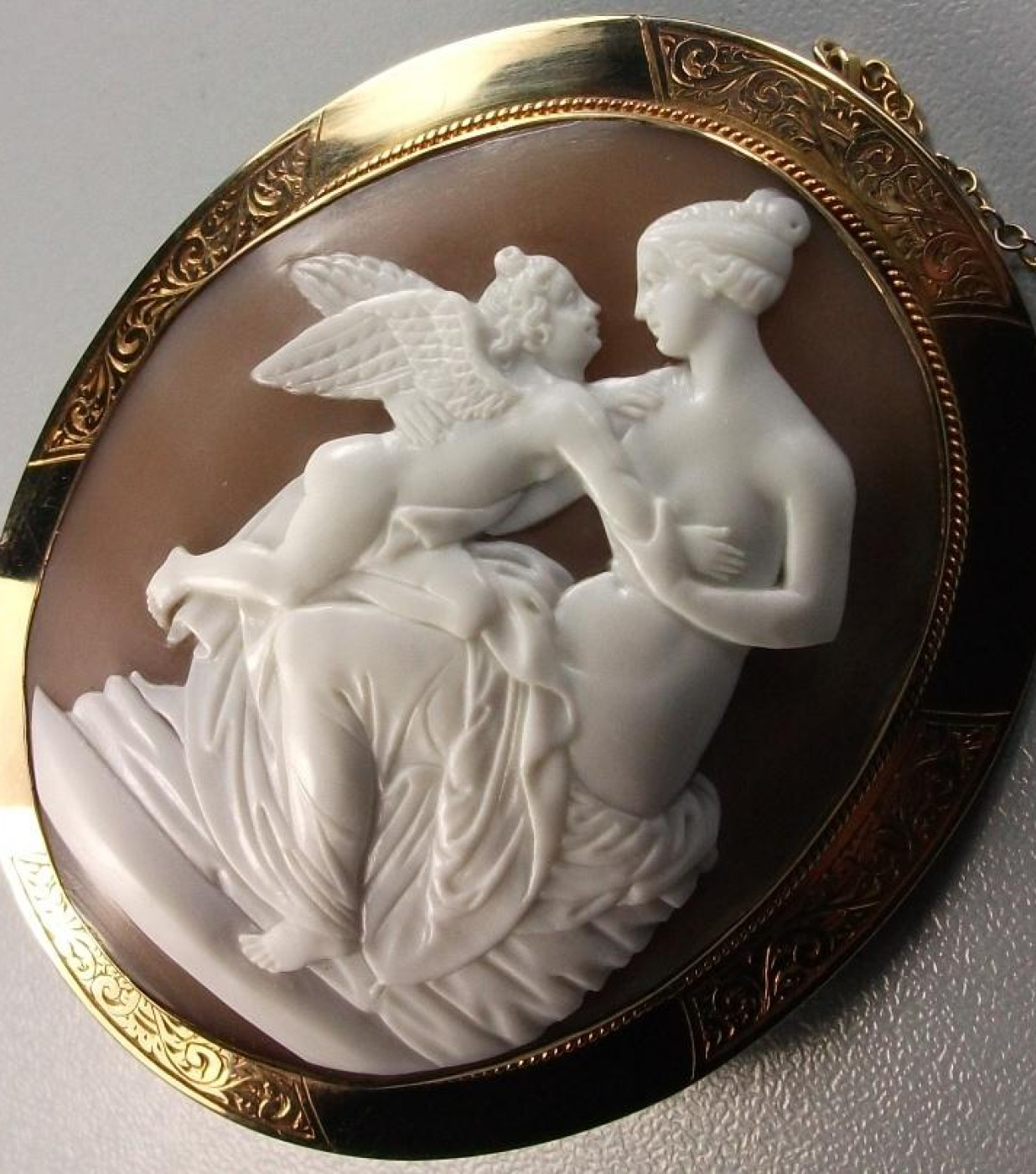 A fantastic almost Museum Quality cameo of  Venus and Cupid. A large and very finely executed cameo. Note some differences between the sculpture and the cameo, the sculpture shows Venus and Cupid which are almost to kiss each other, Venus has a nude breast, Cupid has his intimate parts naked, the cameo instead shows the figures not so close to kiss, the arm of Cupid hides Venus breast and there is a carved drape who covers the intimate parts of Cupid. In the Victorian era was considered scandalous to show any nude part of the body, sometimes even on the work of art so the artists sometimes preferred to cover those body parts with carved veils. However this is cameo who moves me deeply, it speaks about the love of child for his mother and vice versa, as every other cameo of mine even this one has its own soul. Look how it is so well proportioned and how the details are carved, like the drape who covers the legs of Venus, her foot, the wings of Cupid. The pictures really don't give any justice to this cameo which is very hard to photograph as the carving is very white. A real wonderful piece to not to missed. This marble relief of Venus and Cupid is made by John Gibson, in Britain in ca. 1839. This may be the Venus and Cupid relief exhibited at the Royal Academy in 1839. However, he is known to have executed more than one version of the subject, and another is housed at the Royal Academy, Burlington House, London. Gibson spent most of his working life in Rome, and had studied in Canova's studio. An absolute beauty, a perfect set carved by a true artist. The stunning and heavy gold frame, which a real artwork, completes this cameo and makes it unique.  A fantastic cameos set to not to be missed.

A bit of history:
Venus was a major Roman goddess principally associated with love, beauty and fertility, the equivalent of the Greek goddess Aphrodite. Venus was the consort of Vulcan. She was considered the ancestor of the Roman people by way of its legendary founder, Aeneas, and played a key role in many Roman religious festivals and myths. Venus had no childhood: in every image and each reference she is born adult, nubile, and infinitely desirable. Venus, in many of the late anecdotal myths involving her, is characterized as vain, ill-tempered and easily offended. Though she is one of the few gods of the Greek Pantheon to be actually married, she is frequently unfaithful to her husband. Hephaestus is one of the most even-tempered of the Hellenic deities; in the narrative embedded in the Odyssey Venus seems to prefer Ares, the volatile god of war. She is one of a few characters who played a major part in the original cause of the Trojan War itself: not only did she offer Helen of Sparta to Paris, but the abduction was accomplished when Paris, seeing Helen for the first time, was inflamed with desire to have her—which is Venus' realm. Due to her immense beauty Zeus was frightened that she would be the cause of violence between the other gods. He married her off to Hephaestus, the dour, humourless god of smithing.  Her unhappiness with her marriage caused Aphrodite to seek out companionship from others, most frequently Ares, but also Adonis. Cupid or Eros was son of Venus.