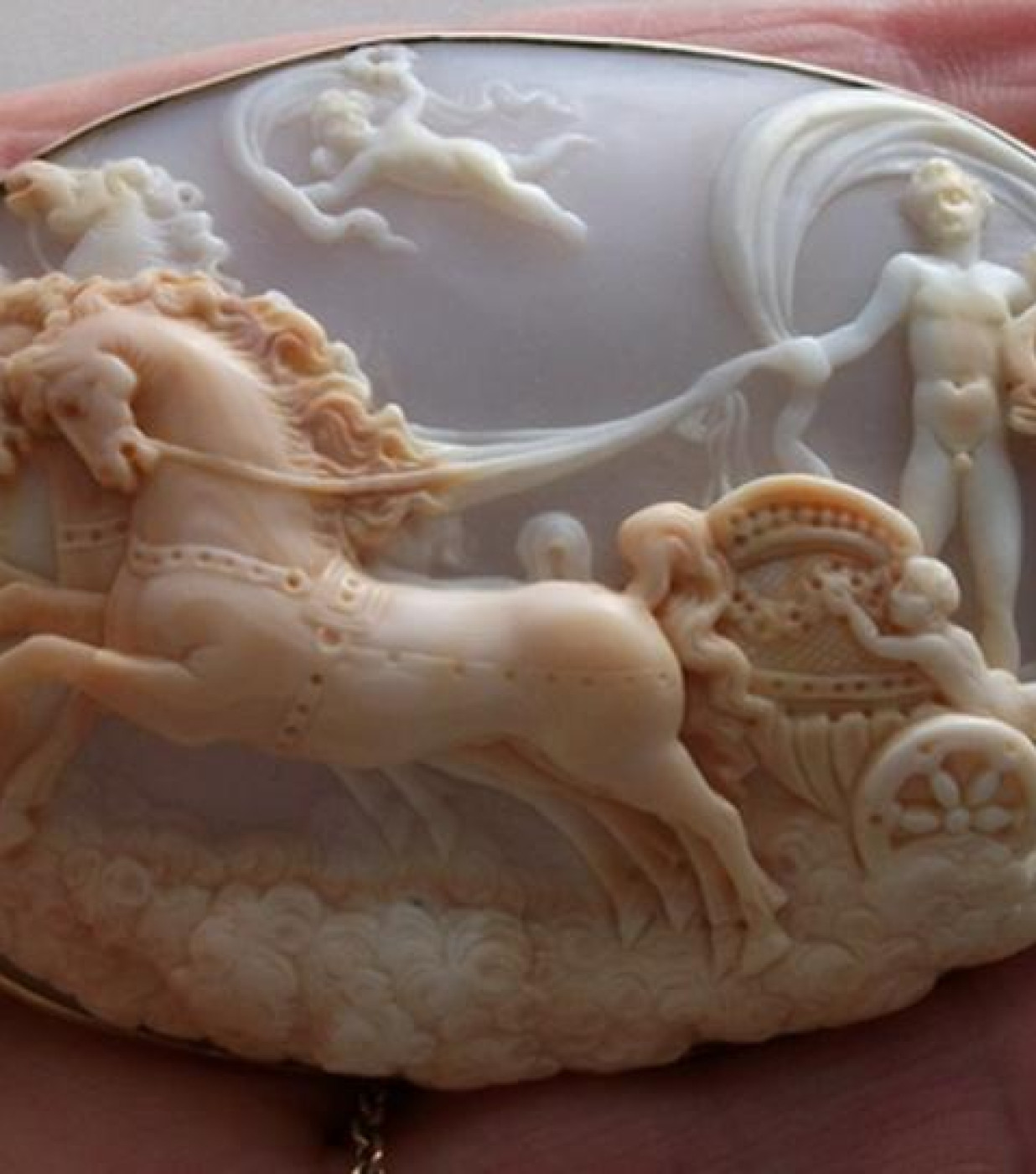 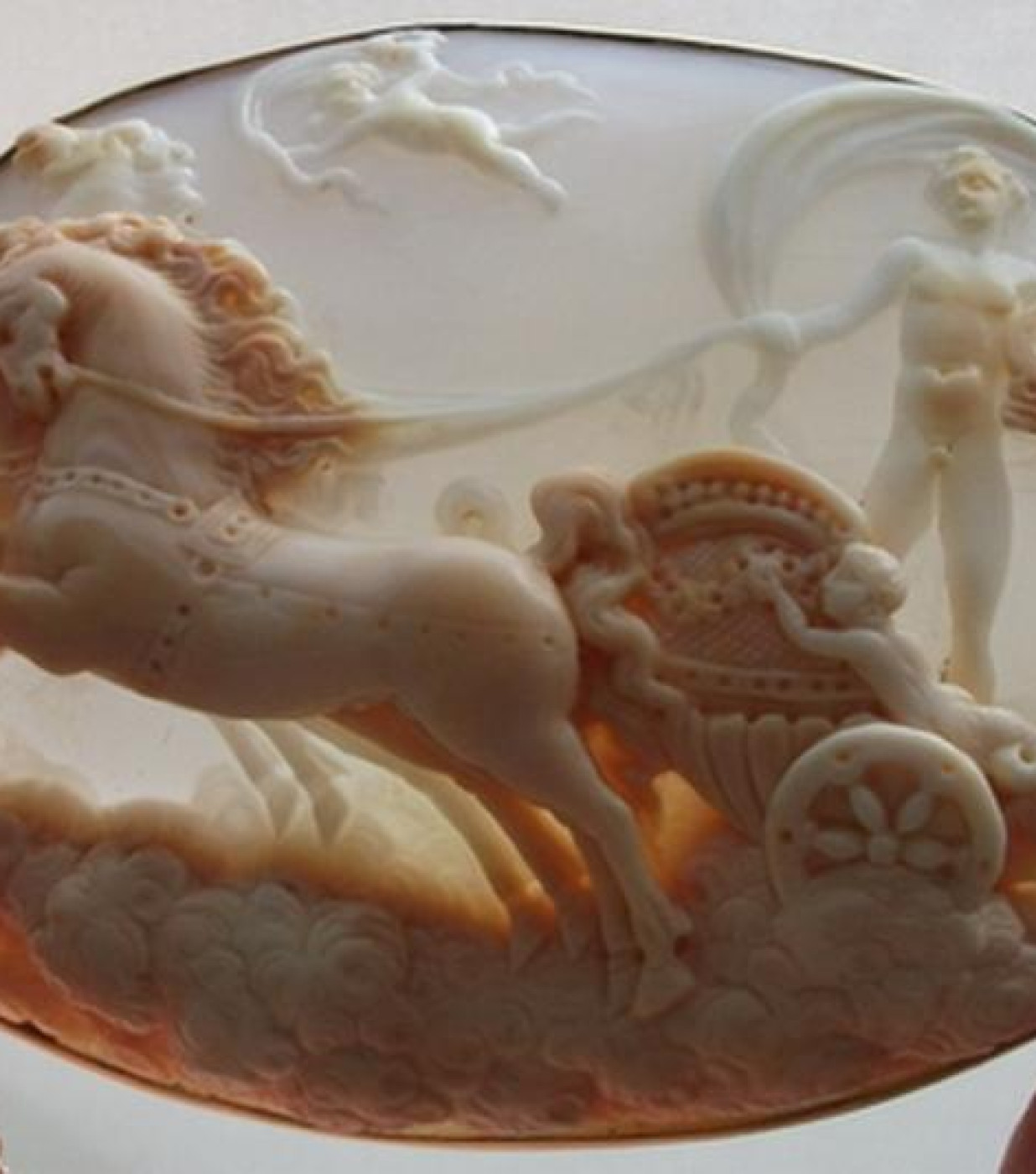 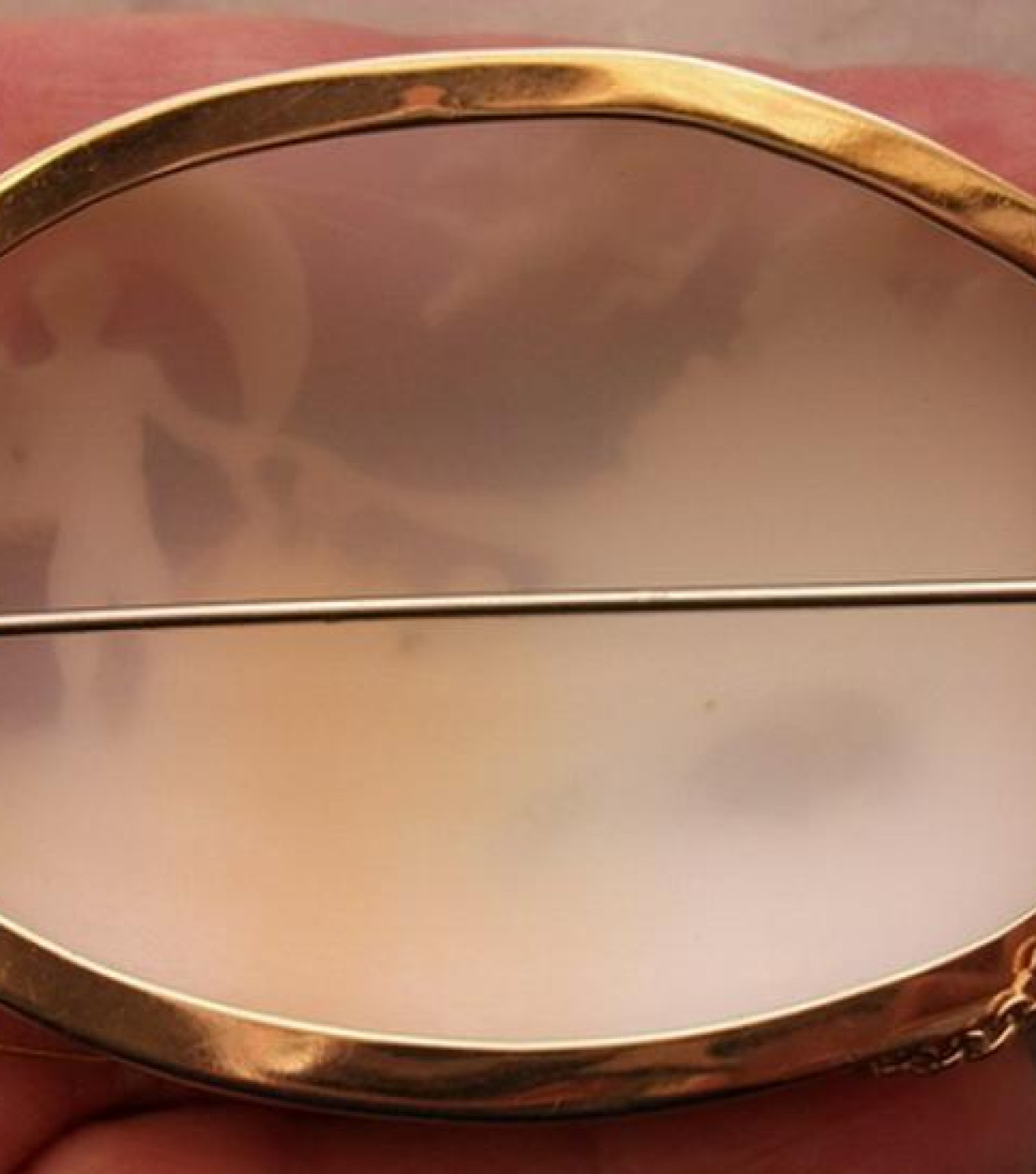 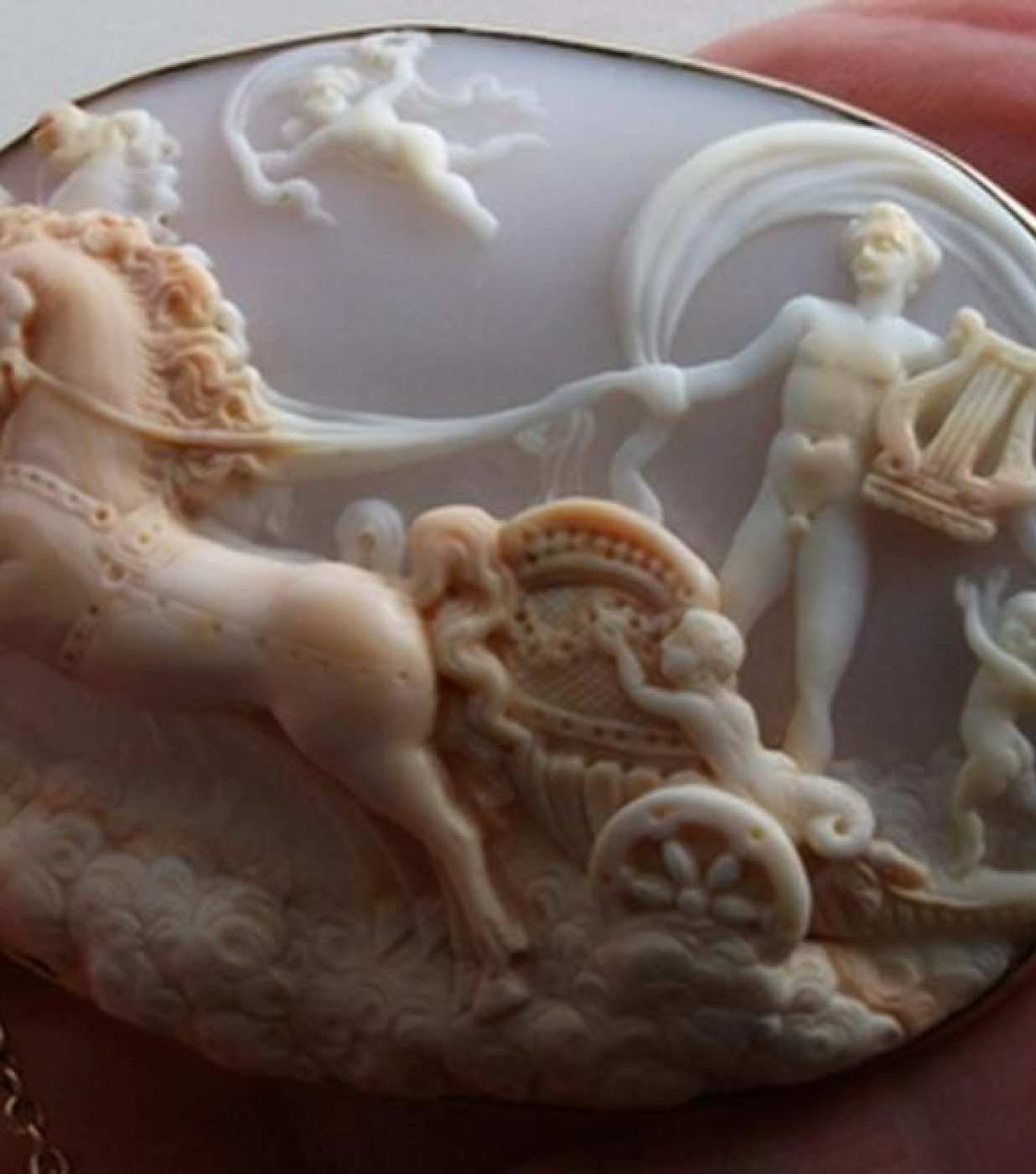 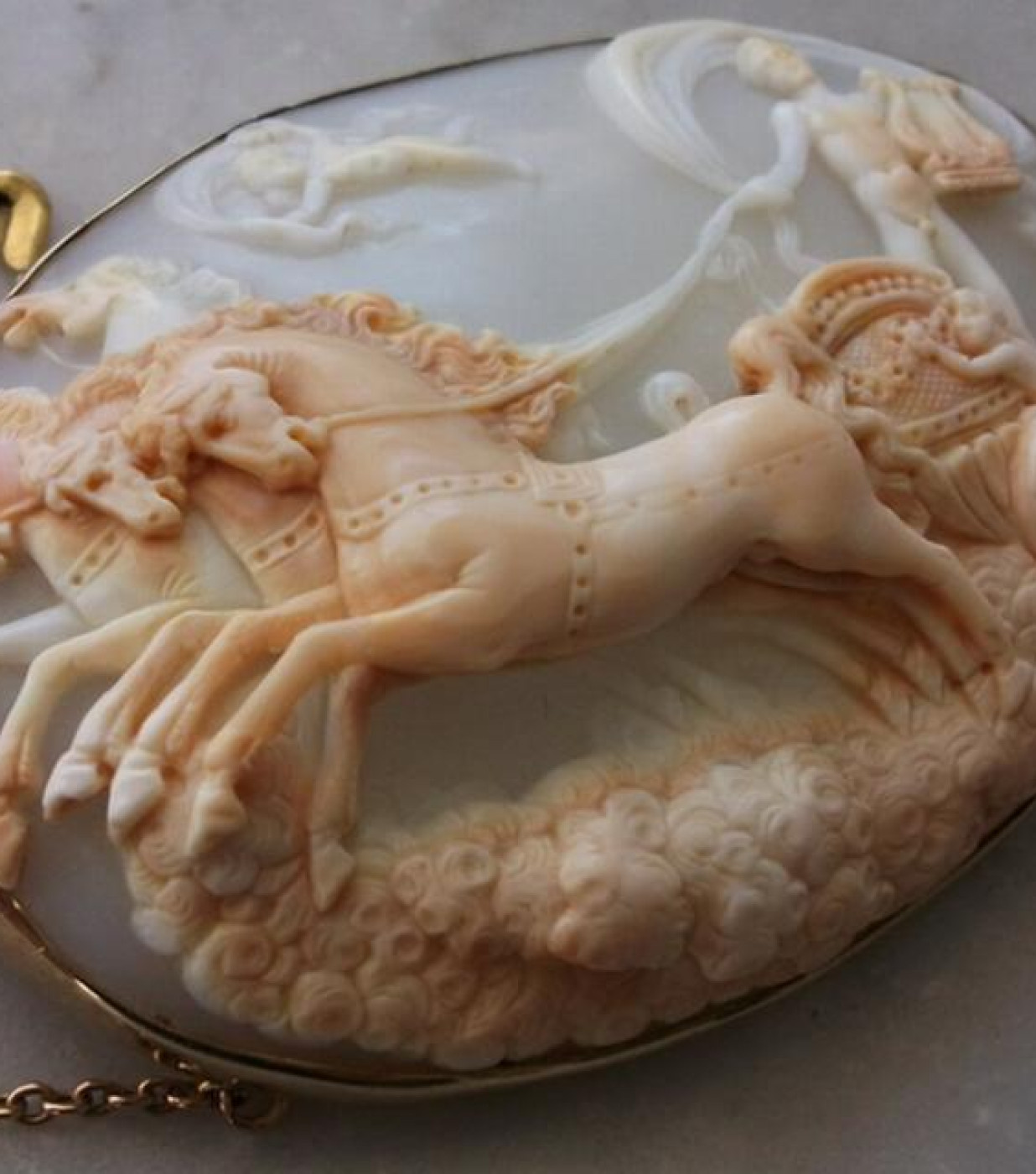 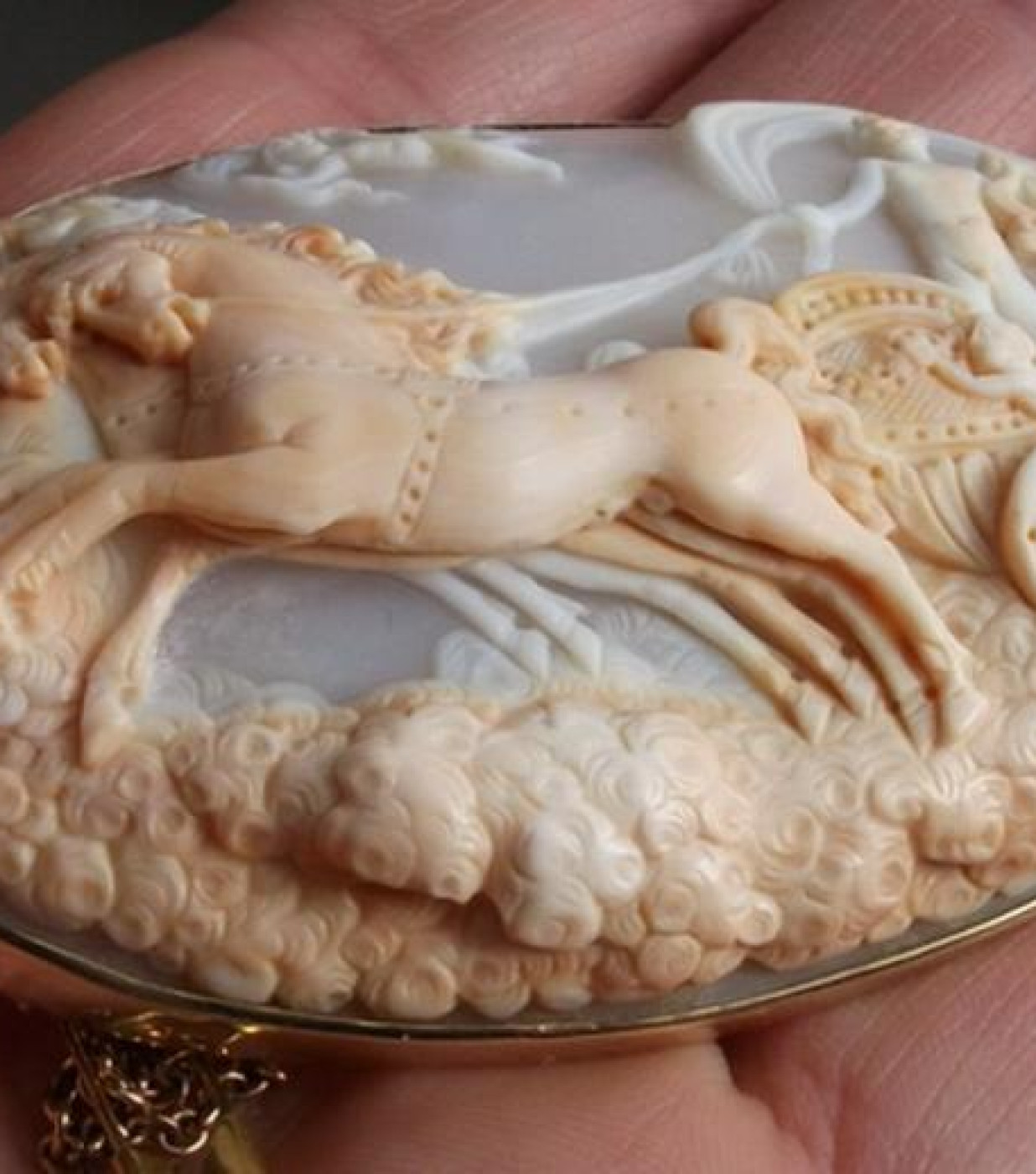 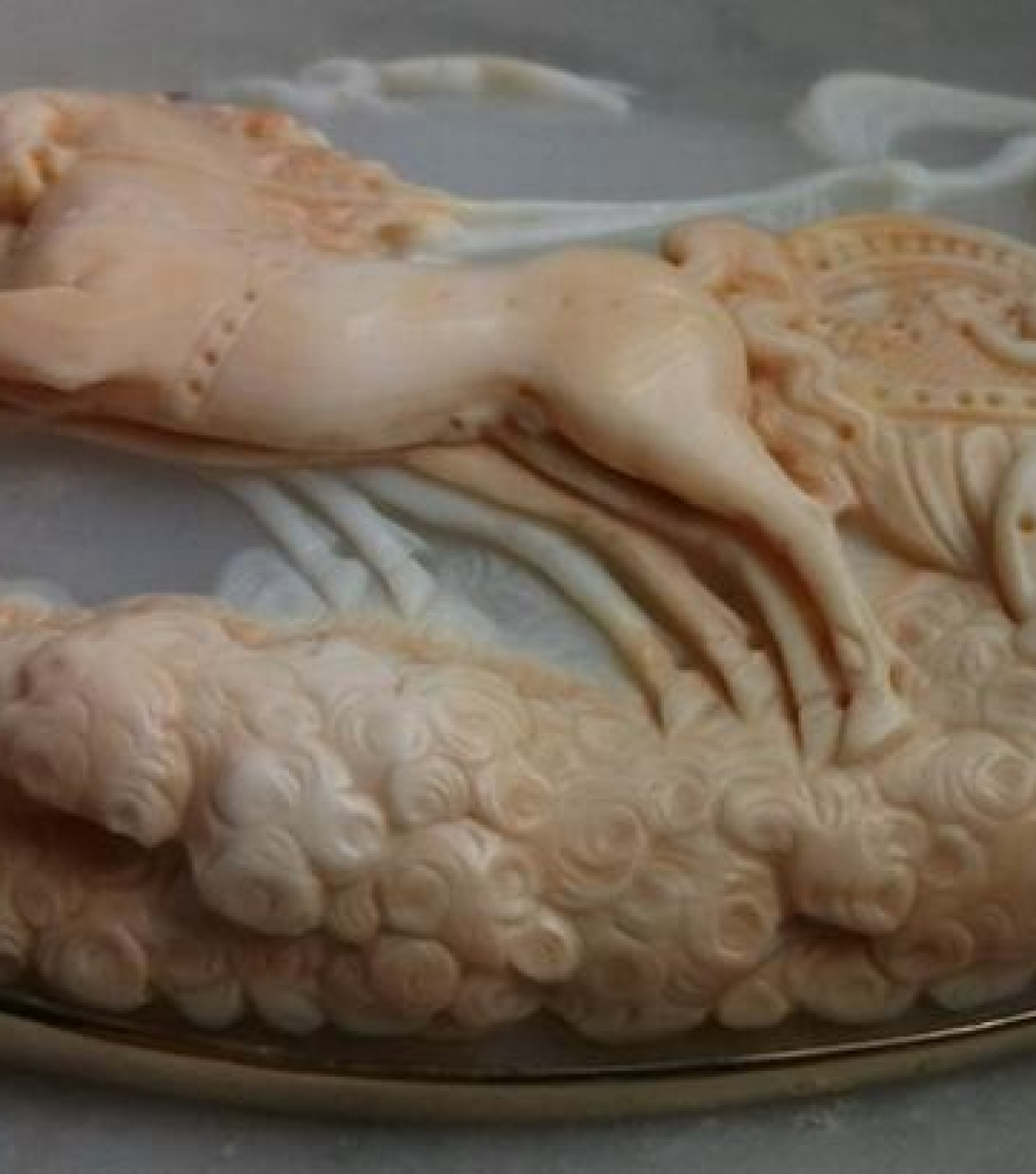 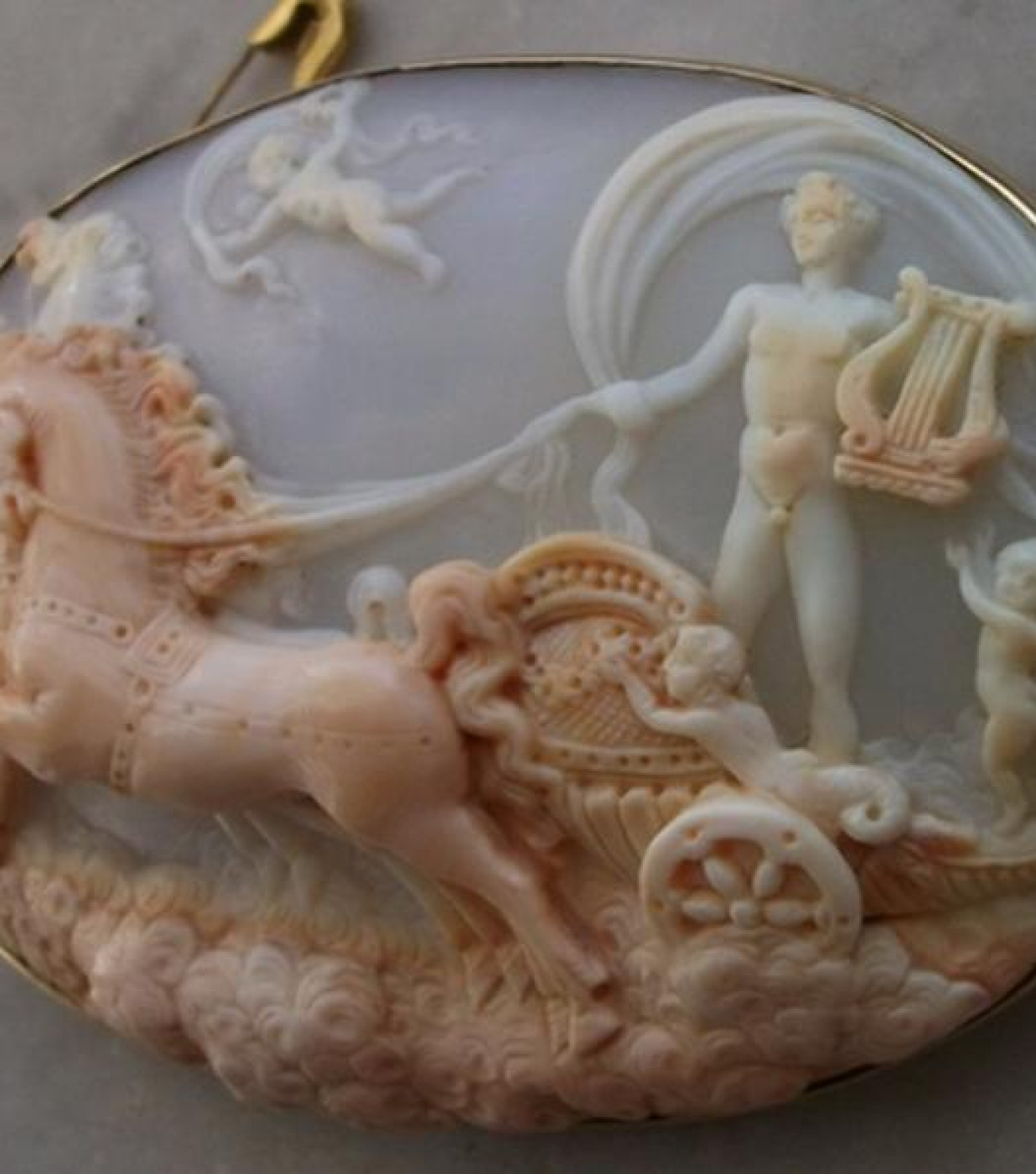 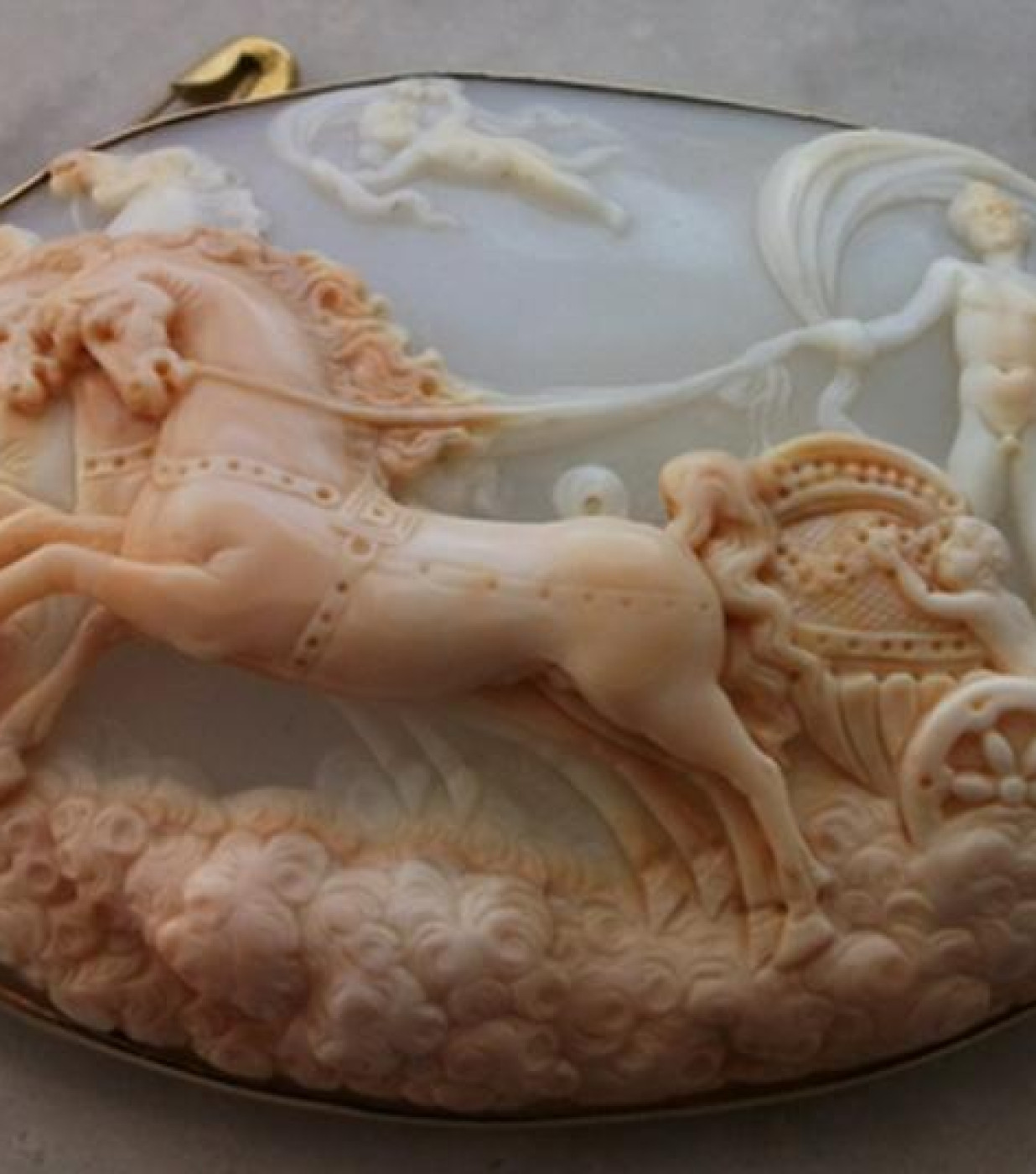 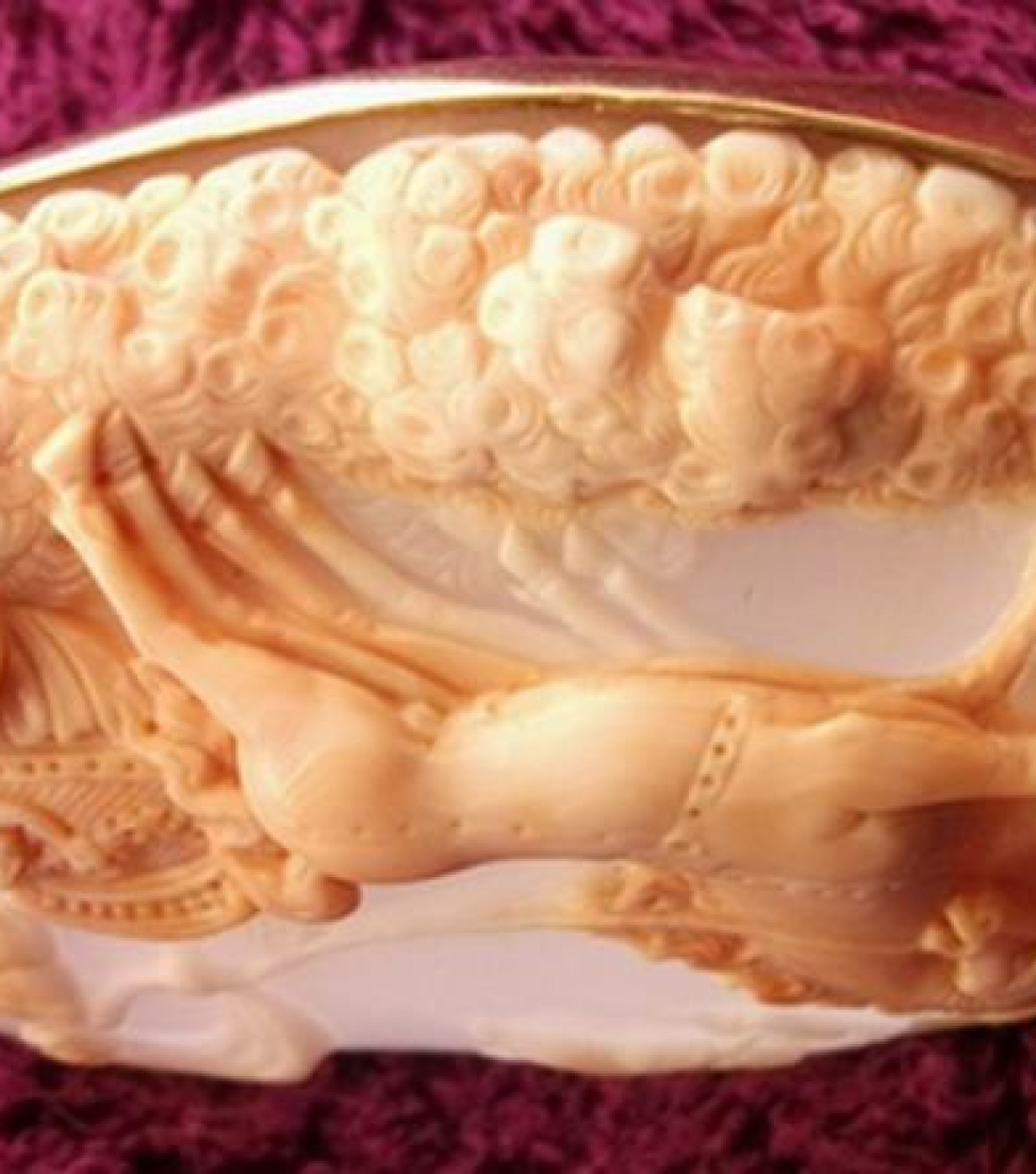 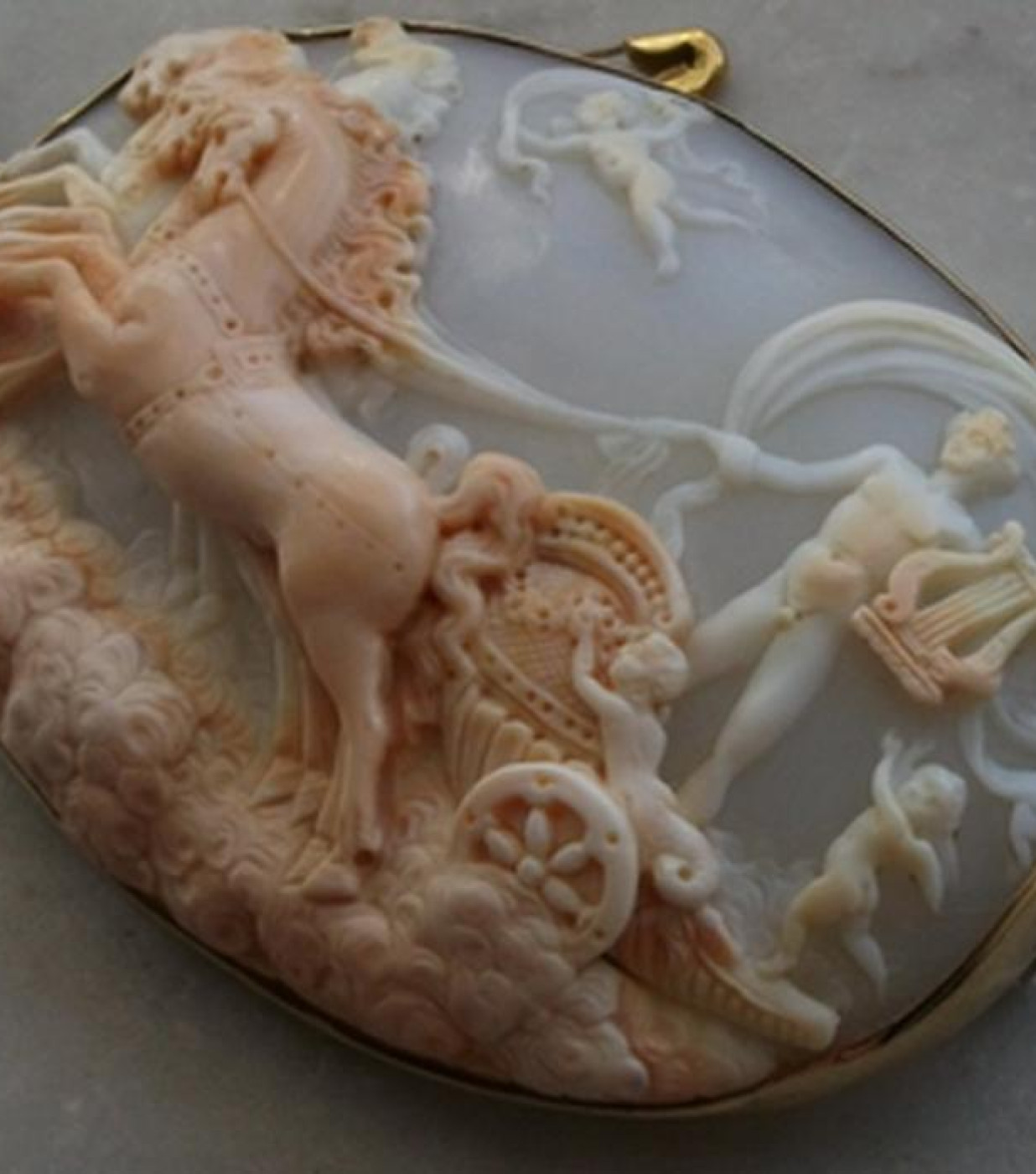 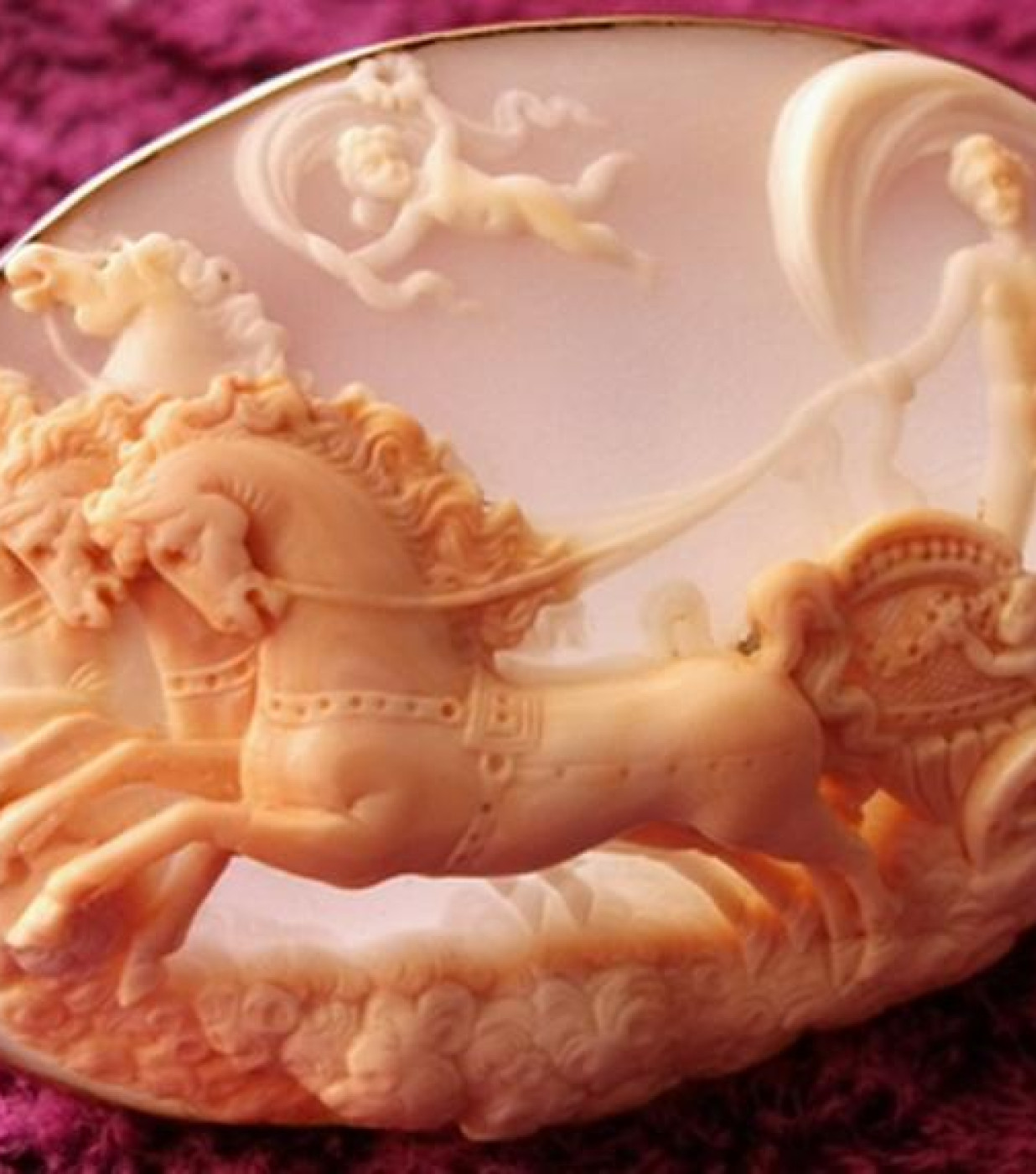 Highest Museum Quality cameo of a rare subject  Apollo on his Chariot which is also called the Chariot of the Sun. I'm really amazed by the carving of this cameo. The subject is so deeply carved that it results to be three-dimensional. It is not easy to find cameos so highly relieved.  The skill of the carver is absolutely incredible, he used the different shades of colors of the shell to give life to this cameo. Note as the Apollo and the cherubs are carved in white, while the horses, the chariot, the Apollo's lyre and the clouds are carved in light orange, just to make a difference among them and making this subject real.  Have you looked at the horses? Their strong muscles are perfectly shown just like they were really galloping. It seems to me that they could come out of the cameo and continue their race out of it! This subject is truly amazing, everything is so realistic.  This is one of most beautiful cameos I have ever seen, the pictures speak by themselves. This is another masterly carved cameo. A very desirable collectors piece, rare and museum quality cameo.
A bit of History:

Without doubt, after Zeus, Apollo is the most important God of the Greek mythology. Latona, seduced by Zeus, assisted by the goddess Iris, gave birth to two twins, Apollo and Artemis. Apollo represents the self-control, the self-knowledge and the sense of the measure, in his temple to Delphi it was written there "know yourself." He also deals with the expiations, purifications,  recoveries (and as such he has called "Alexikakos" that means "the one who sends away the evils"). Apollo is also a prophetic God, God of the fair and of the purity and also of the music, in fact he is represented with the Lyre and as head of the Muses that he drove and protected. He was identified also as Helios and he was imagined driving a cart thrown by four horses with which it conducted the sun through the sky. Represented as a very beautiful and naked youth, the Romans revered him as protector of the health and as God of the divination, in his honour they celebrated the games called "Ludi Apollinares" (Apollo's Games). Apollo is the solar divinity par excellence. God of all the beautiful things.