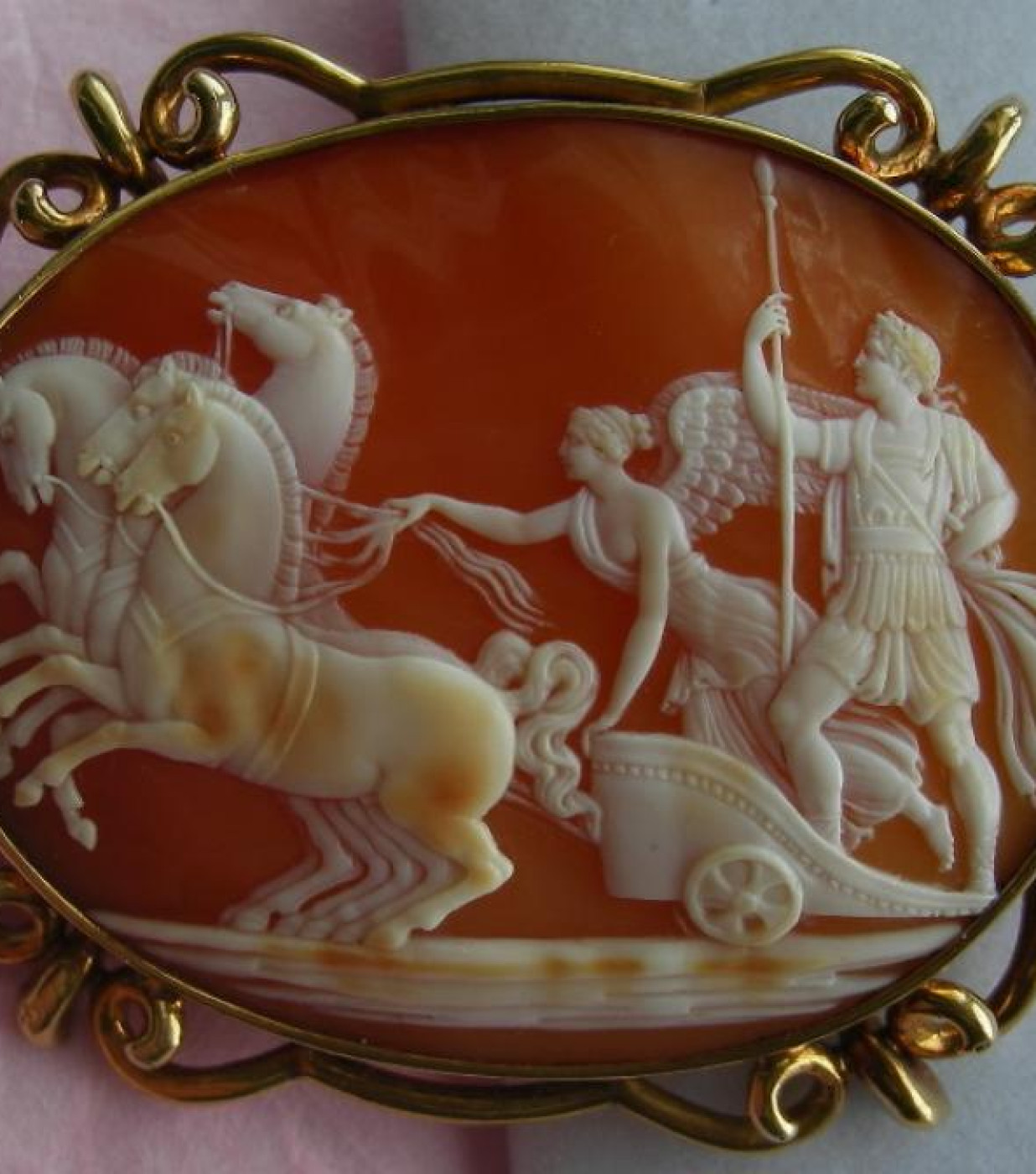 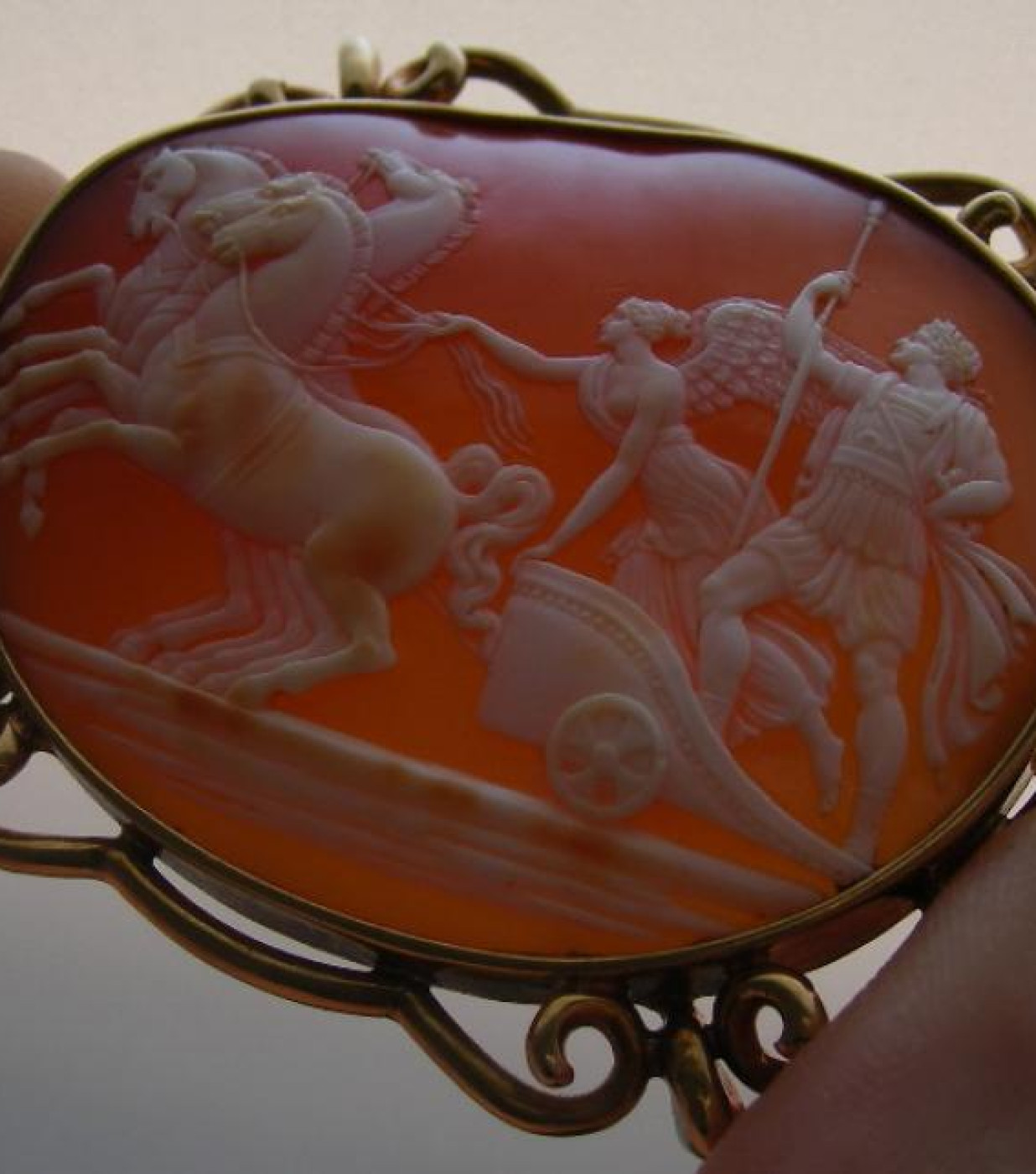 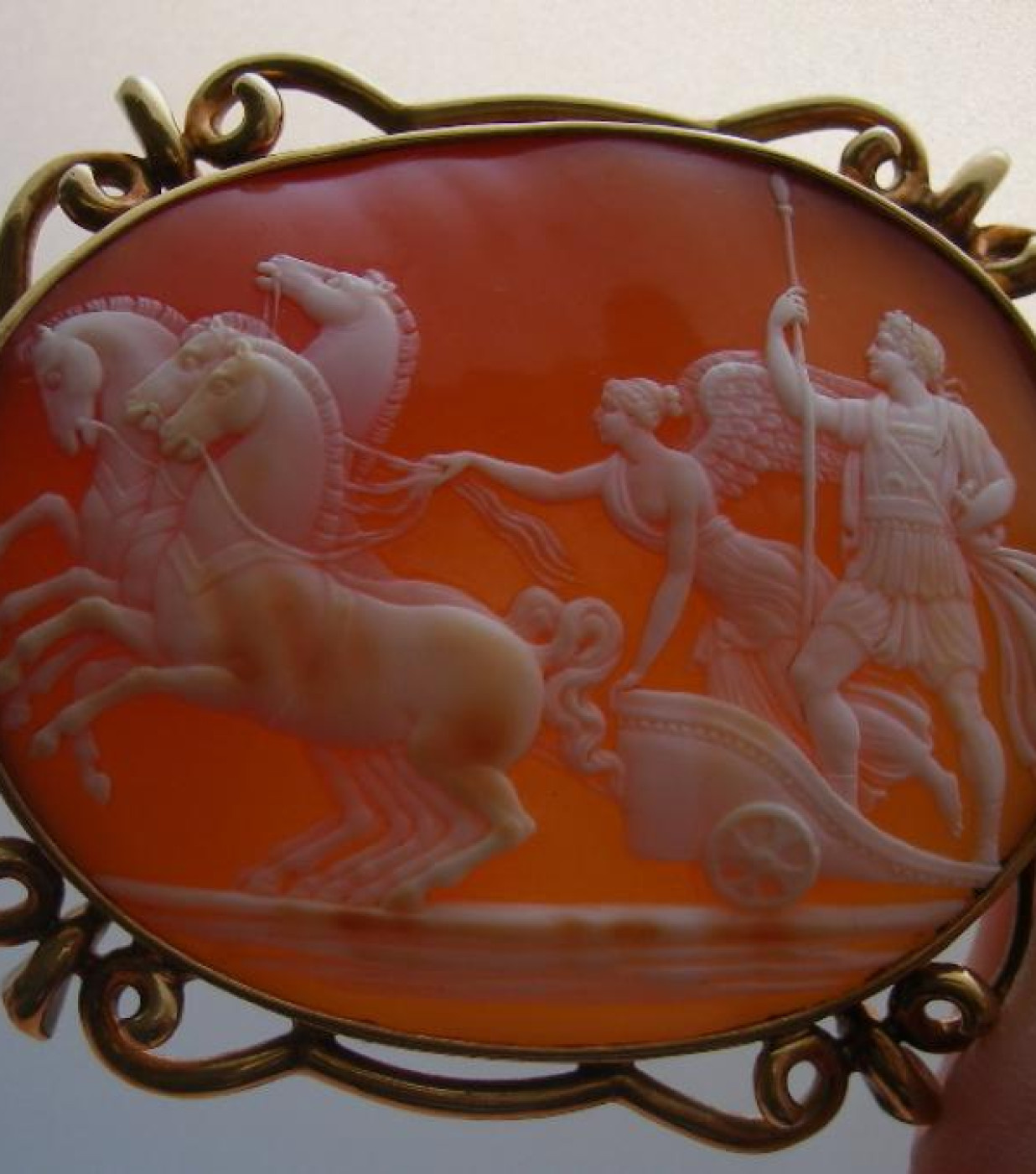 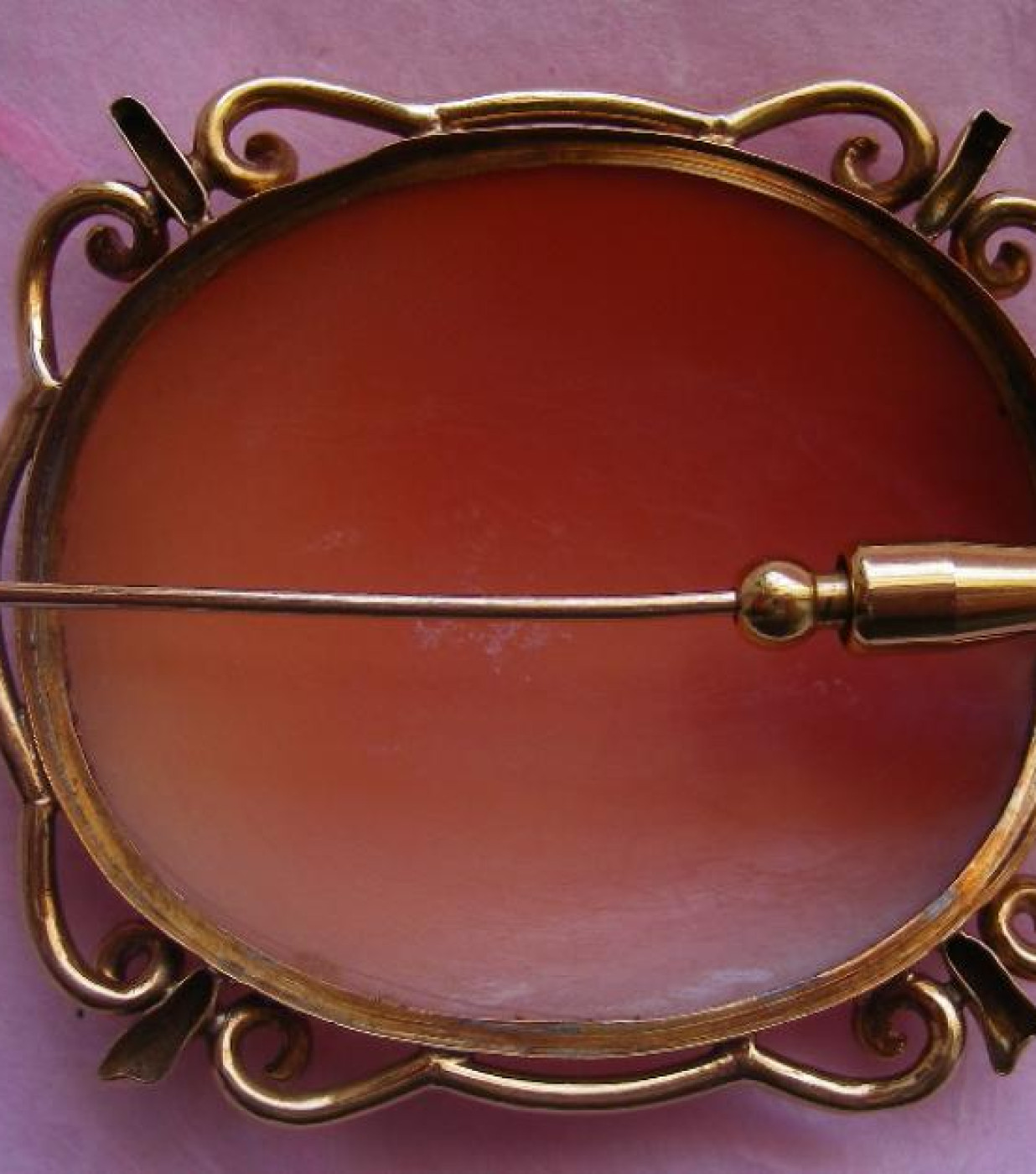 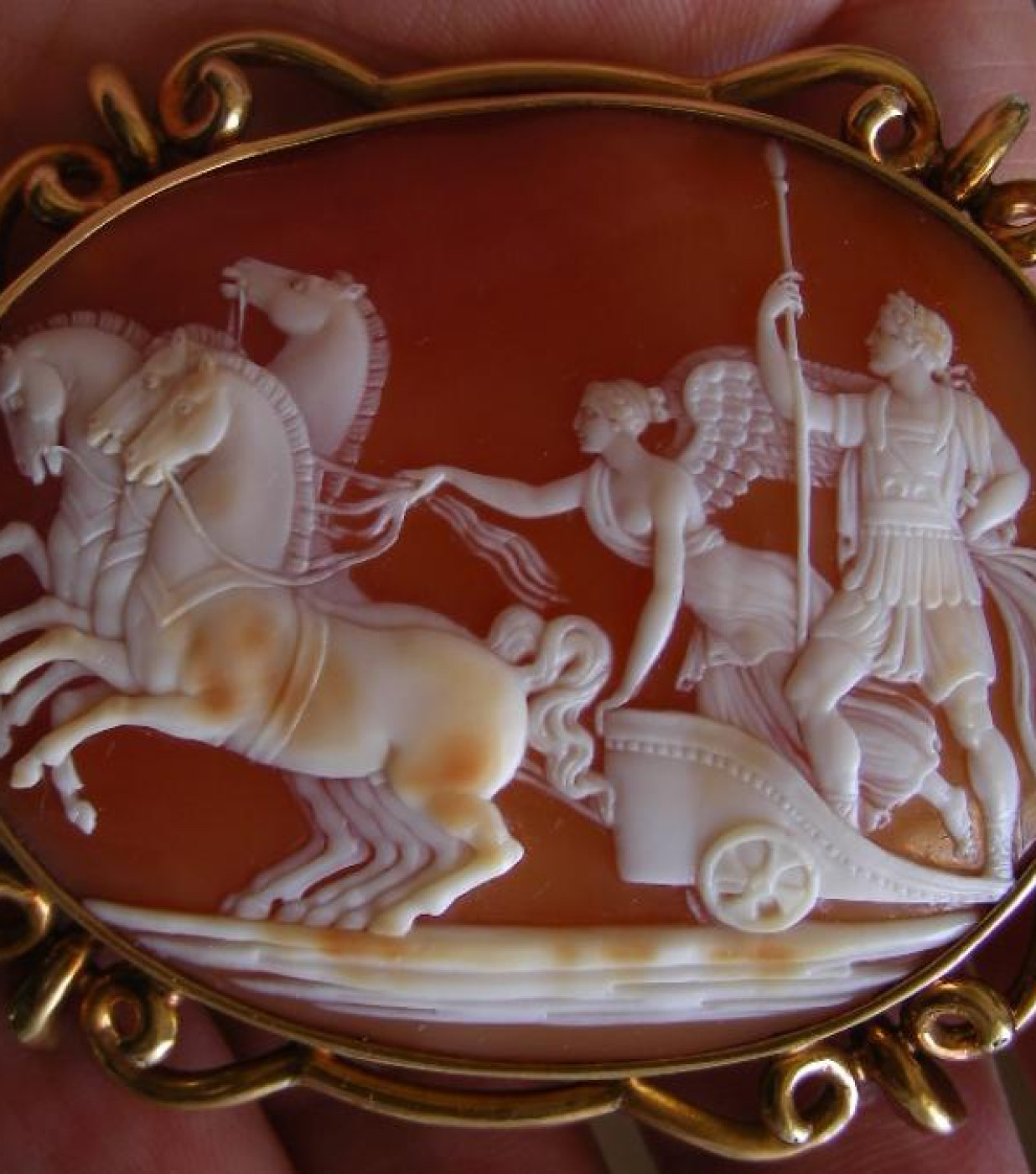 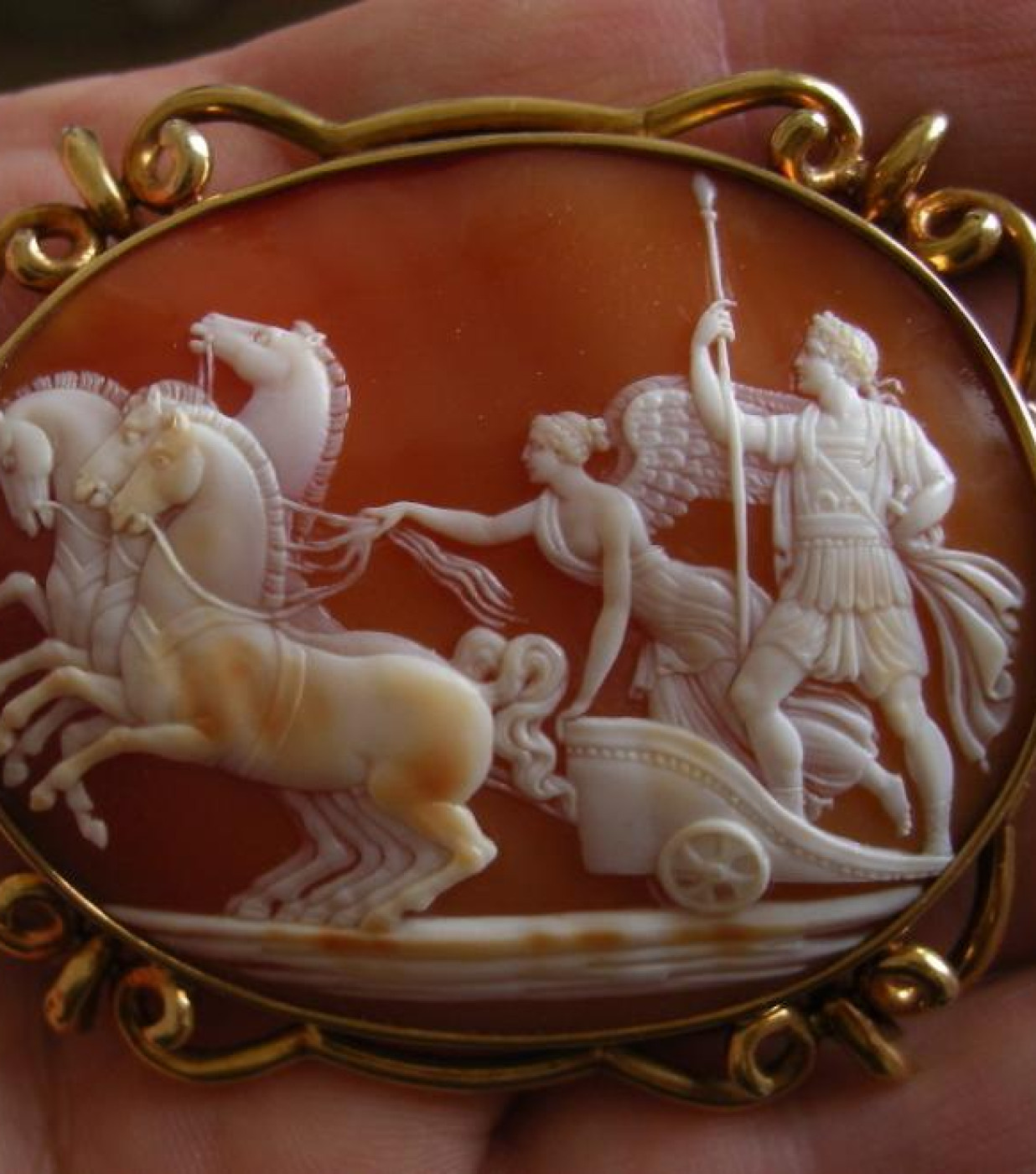 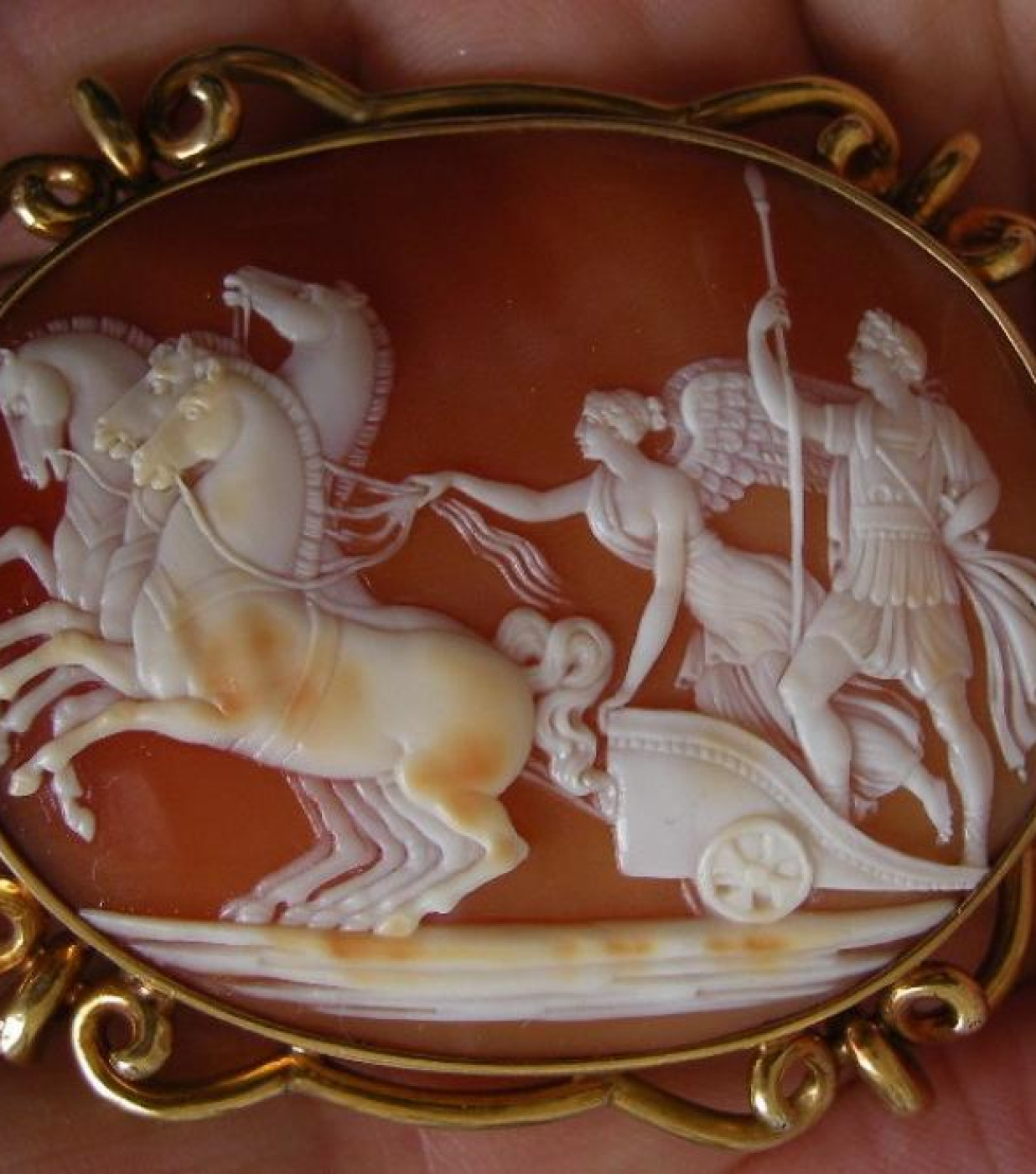 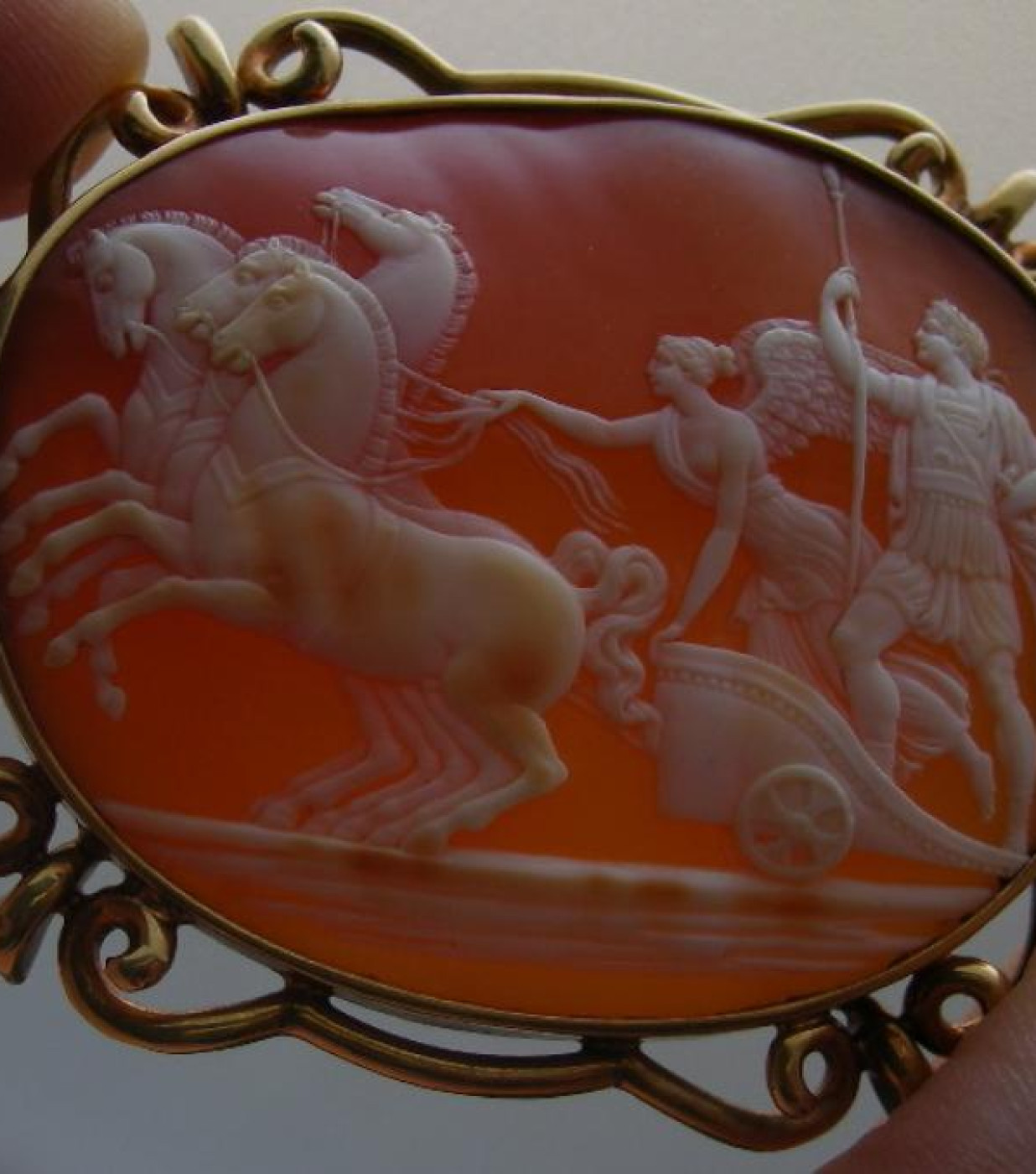 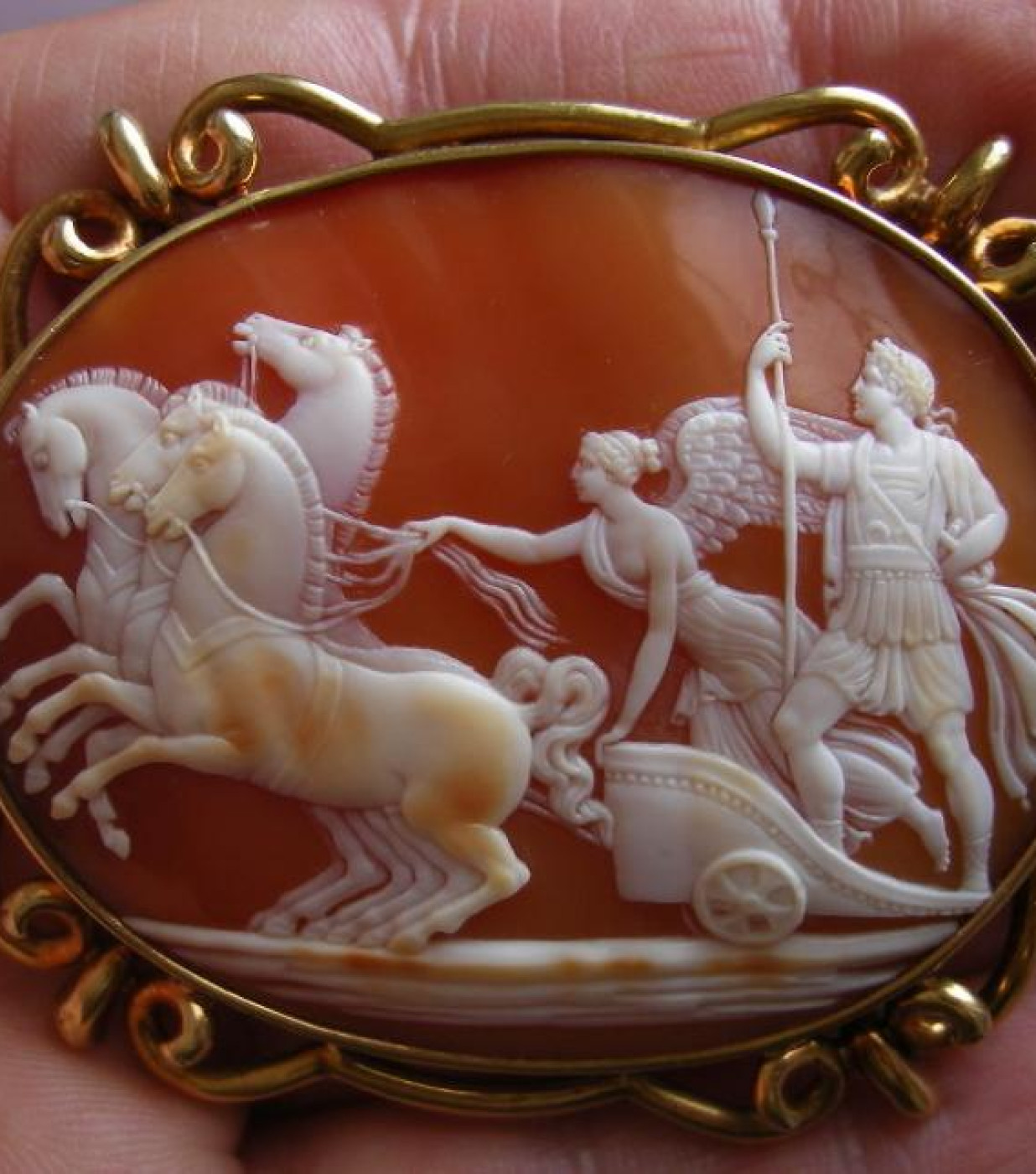 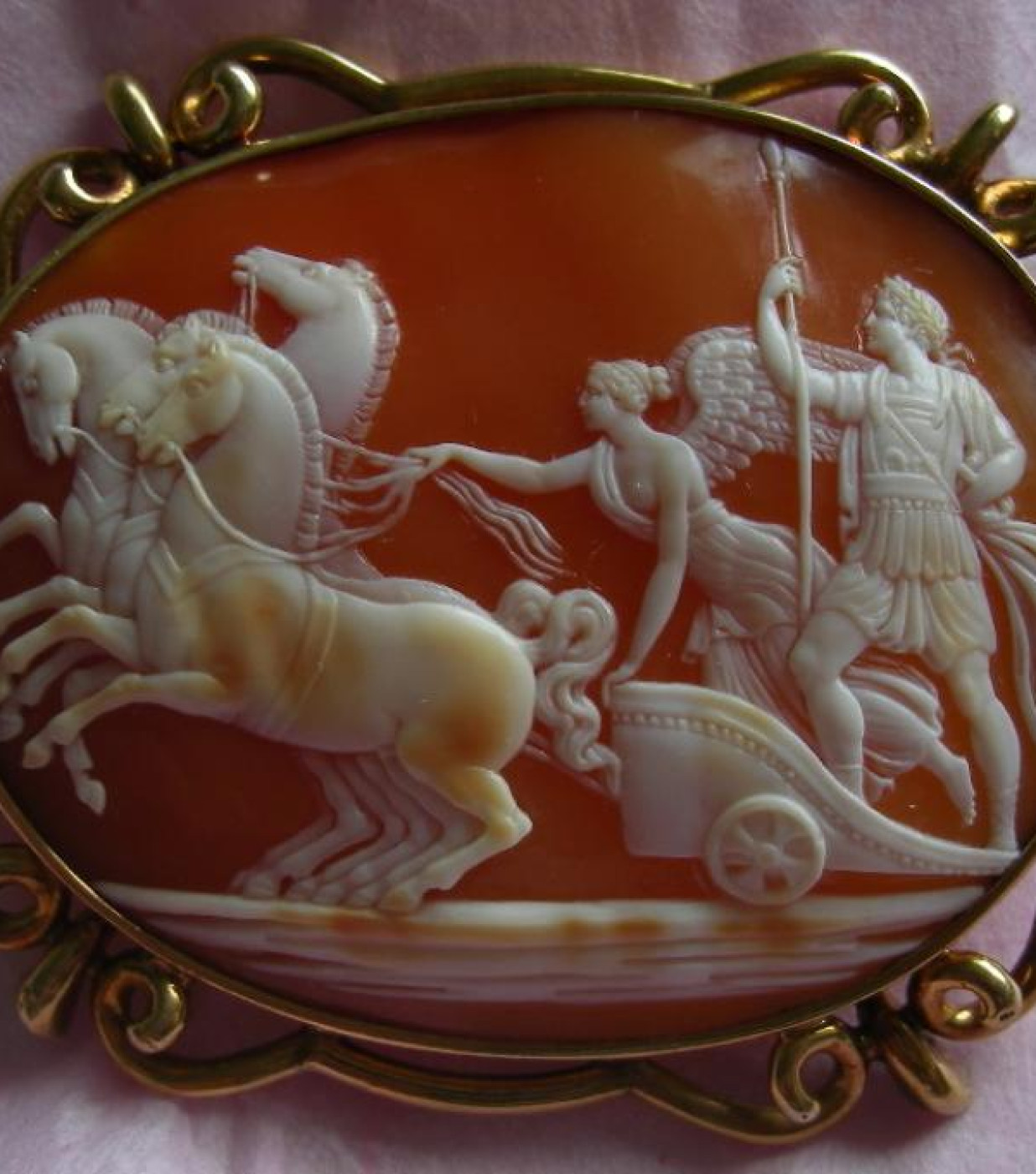 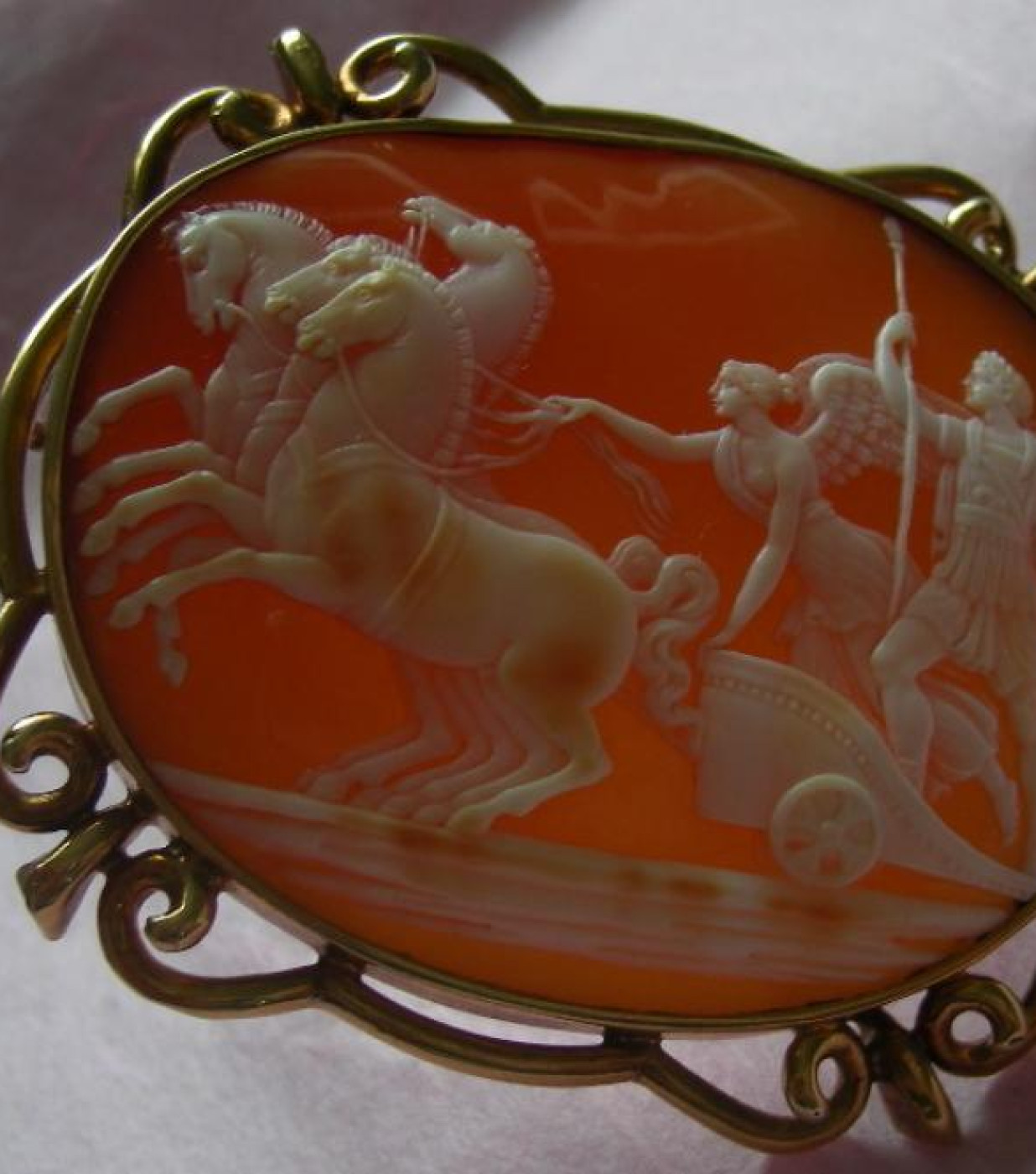 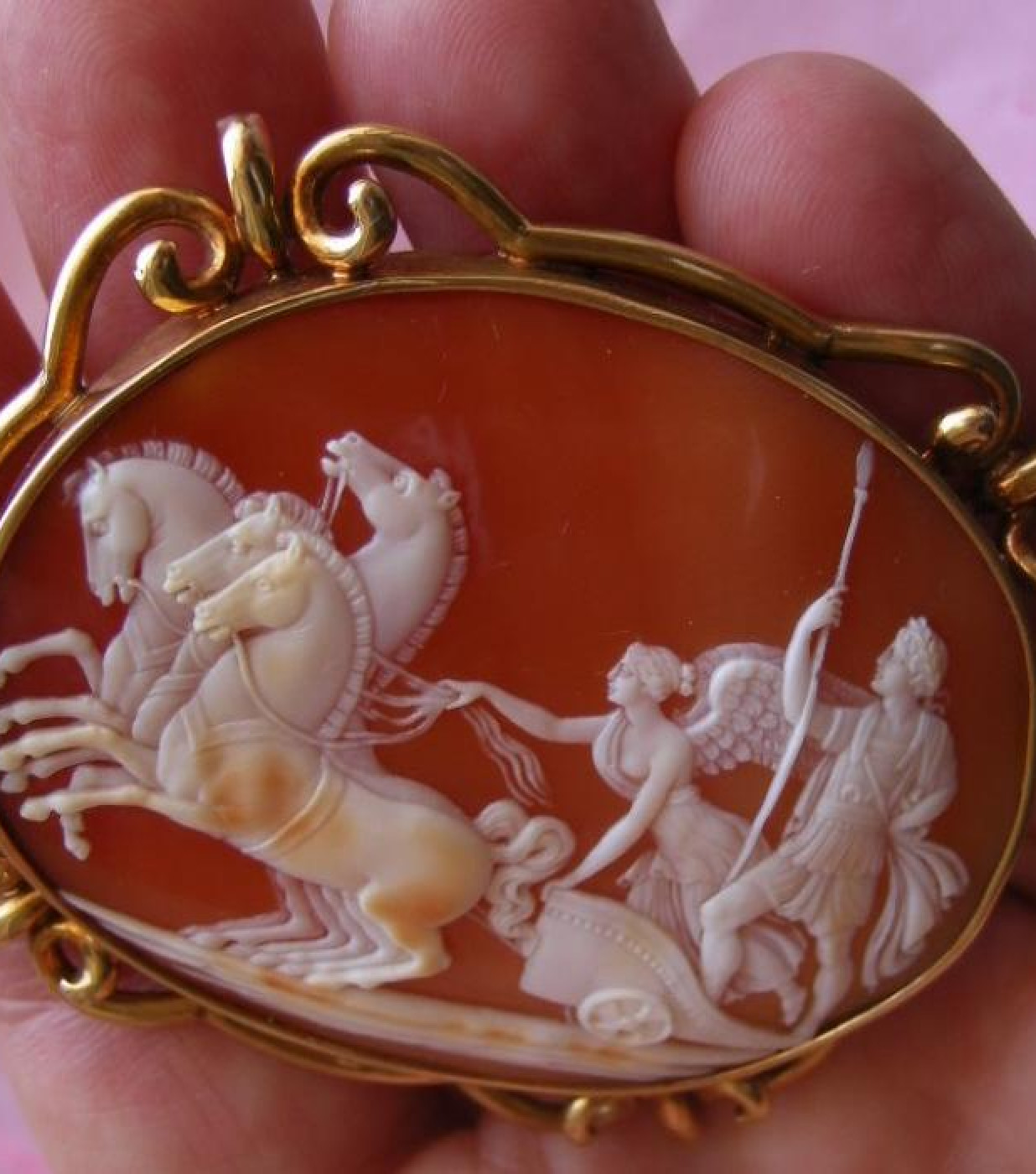 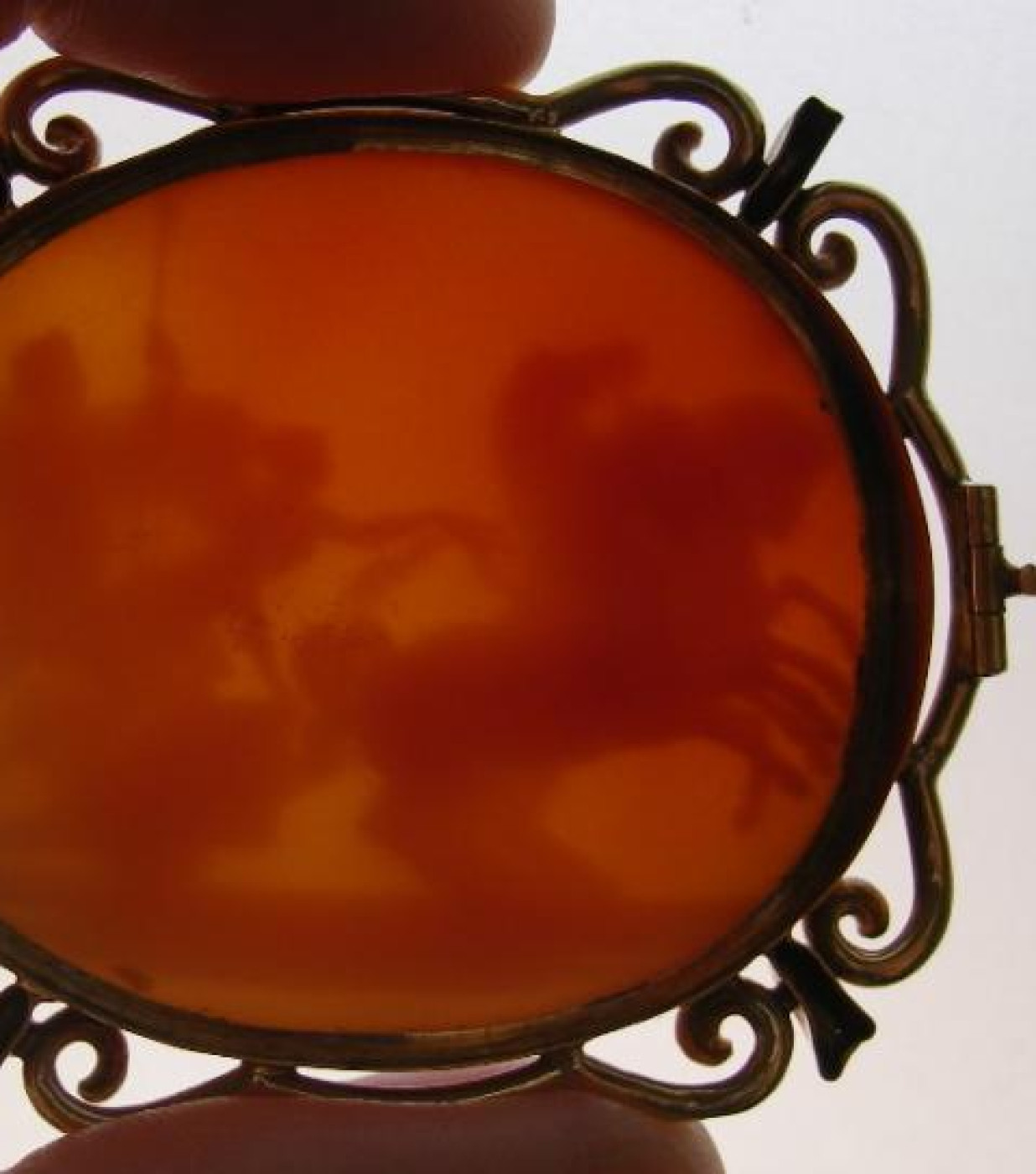 More than Museum Quality and huge cameo depicting Alexander the Great in his triumphal chariot. He's companied by Nike, the winged victory, who symbolizes the victory of Alexander on Babylon. This cameo is after a 1812 Thorvaldsen work called Alexander the Great's Triumphal Entry into Babylon. Thorvaldsen became more and more integrated in cultural life in Rome. In 1808 he became a member of the papal S. Luca Academy in Rome and executed the relief A Genio Lumen as the piece celebrating his appointment. A temporary culmination in his fame was reached with the execution within quite a short space of time of the 35 metre-long relief of Alexander the Great’s Triumphal Entry into Babylon (1812) for a room in the Palazzo del Quirinale that was being decorated for the expected arrival in Rome of Napoleon I. The plaster version of this relief is still in place. Marble versions were later made for the Villa Carlotta by Lake Como and for Christiansborg Palace in Copenhagen. Another copy made in 1822 is now at the Thorvaldsen Museum in Copenhagen. Look how the carver used the shell to evidence the horses. This subject seems to jump out from the shell, everything is so realistic, you can also see the muscles of Alexander's legs, his sandals. The strong muscles of the galloping horses are evidenced. This is one of most beautiful cameos I have ever seen, the pictures speak by themselves. The frame is unusual too, so elaborate and wonderful. This is another masterly carved cameo. A very desirable collectors piece, rare and museum quality cameo.
A bit of History:
Alexander (356-323 B.C.)  was born in Pella, Macedonia, the son of Philip of Macedon, who was an excellent general and organizer. His mother was Olympias, princess of Epirus. He was king of Macedonia and one of the greatest generals in history. He conquered much of what was then the civilized world. Alexander brought Greek ideas and the Greek way of doing things to all the countries he conquered. This great general and king made possible the broadly developed culture of the Hellenistic Age.